Too damn many Steves around here

So, help me change my name. [edit] Yeah, seriously. I did make the thread as a joke, but to be more serious, it's something I've been thinking about for a few years know, with rather little to show for it. Of course, asking anyone, let alone strangers on an internet forum is not terribly useful for this sort of thing, but strangers do have a unique perspective. So I'm curious what, if any, suggestions you may have. My name is Steven. I agree with Elliott Smith's sentiments, "And also, like, there’s no good versions of it, ya know like there’s, Steven … Steven is like sort of too … hard to say, and kind of like, bookish. Steve is like … like jockish, sorta. Big handsome Steve, big shirtless Steve, ya know, like football playin’ blond haired Steve. Ya know? I didn’t like it." I am not a Steven. Never have felt it's my name, and I never have felt any real attachment to it whatsoever. My last name is a hyphenated disaster, a linguistic ball and chain that has caused me no end of problems. I have no real attachment to either side of my family, nor either of my two ethnicities. One friend suggested David, but Judeo-Christian connotations seem particularly unfitting. Another suggested Caiden (Caide is pretty managable as a shortened form), but it sits precariously on a knife's edge of yuppiedom, and it's becoming more common— and nothing is any good if other people like it. I submit as unequivocal proof: 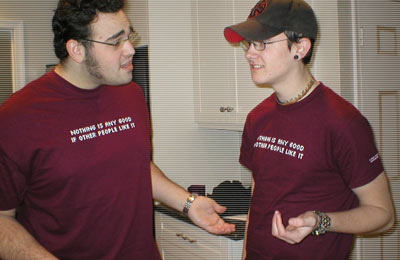 I have a good idea of what I want as a middle name, but feel free to toss up suggestions. Picking a last name has been hell. Culturally, they're family names, and I've got rather little of that and no real connection to it, which makes it quite awkward. I suppose it's the kind of place one would be tempted to shove a literary reference, but I've found none suitable, and not much else has seemed to fit. So, I need a new name. Preferably within one month. Provided by complete strangers. Go!
Tritt vor: Wir hören Daß du ein guter Mann bist.

What, for real? Admittedly you have/had alot of posts but we don't really know who you are, so that's a tough call.

I have a rather common first name, a somewhat common middle name, and a bloody uncommon last name; yet my name is my own because I make it for myself. Isn't any name really like that? Unless you want to be Stormei or something...

~ Huntsman
"Courtesy is every man's own affair, but decency is a debt to life."

Disclaimer: Views expressed in this post may not be my own. I may adopt them for reasons including, but not limited to, amusement, argument, or research.
A

What, for real? Admittedly you have/had alot of posts but we don't really know who you are, so that's a tough call.
Ansered above.
Tritt vor: Wir hören Daß du ein guter Mann bist.

Here is the perfect solution: http://www.askandyaboutclothes.com/F...TOPIC_ID=18961 Archaic names with no modern context.
http://leisure-class.blogspot.com/

i'd pay you if you'd change your name to hortense or cornelius.

You wound me, sir.
I love the names that the Sitwell clan chose. For example Francis Osbert Sacheverell Sitwell.
http://leisure-class.blogspot.com/

when I was in my early twenties I changed my name to something that was pretty cool at the time. it was a very ethnic name (not my ethnicity), with a great sound to it. I used it for 15 years, and then when my son was born my wife asked me to change my name back to the origional. think before changing.
for the sake of anyone who has met Zach...I did just call him a pin up boy - Matt

The rare and elusive Globetrotter joke. Take a picture everyone, like Haley's comet, this only comes along every few years. - Rambo

Did it also have your other favourite things, Metamucil, crocheted shawls and owning 50 cats? - Fang66


Your Lord and Savior, Jesus Christ, I'm sure is happy that you are following his example of love and unconditional compassion - Horns
A

Arethusa, don't change your name. Steven is a great name. I'm a Steven (though most call me Steve) and even though it's pretty common, it seems to work pretty well for a variety of people.
Never underestimate the depth of a curious mind.
StevenRocks - the mall guy

Problem solved!
Yeah, whatever you choose, get yourself a cool nickname in quotes in the middle.