What I Learned from Slim Denim 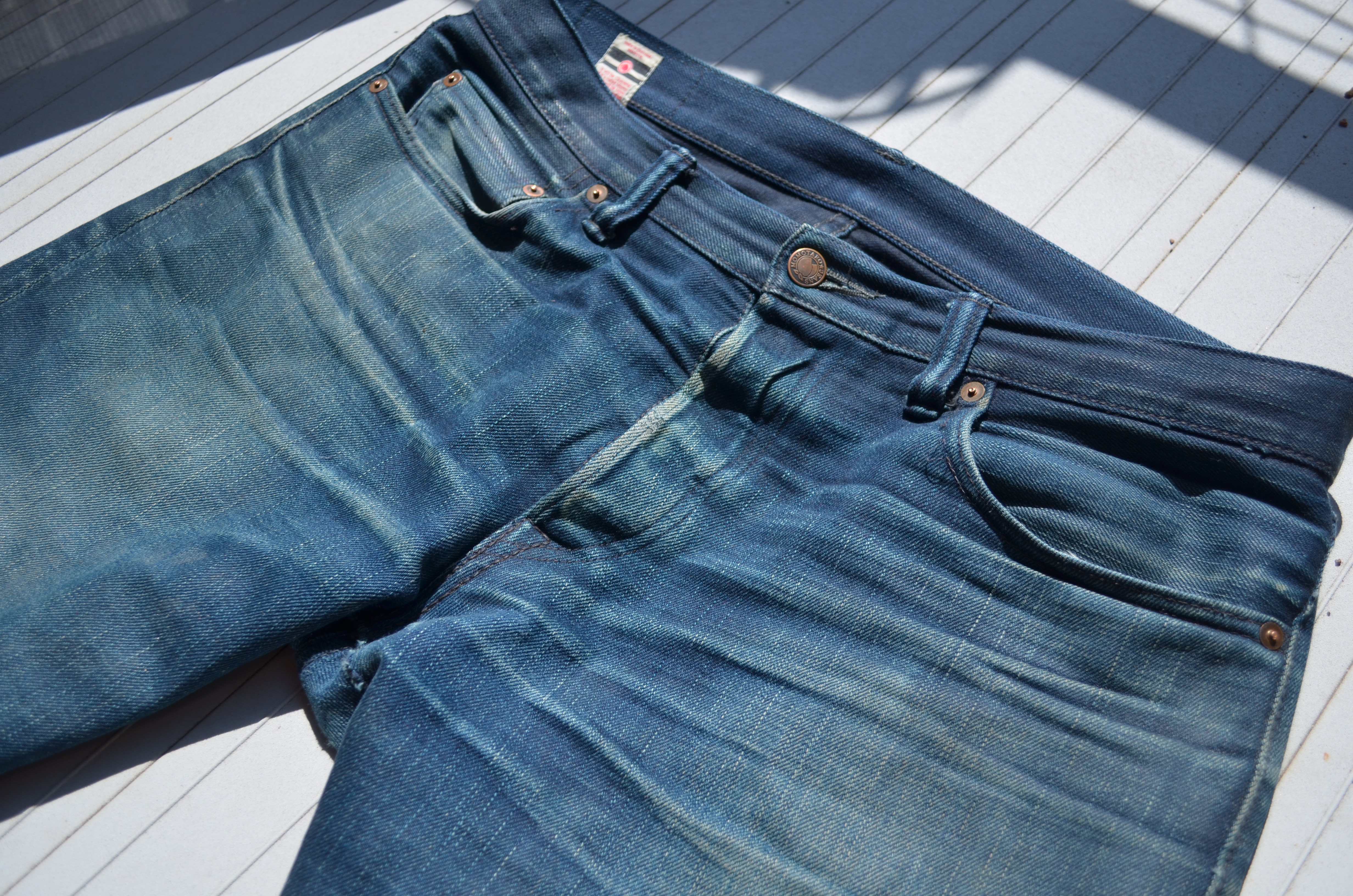 The first pair of “raw” denim jeans I saw that were not my father’s Levi’s Orange tabs ($29.95 at Zellers back in 1980) were Helmut Lang’s “Narrow” and “Straight” cuts, which I stumbled across the Beverly Hills Barneys in 1998. The hems of both seemed improbably tight and unfashionable to me at that time, when 16-18” hems were the norm, and the $300+ price was prohibitive to a graduate student without a trust fund. A few years later, the North American premium denim movement, which started in LA, where the bulk of denim manufacturing is located, began in earnest. My personal favorites were Scott Morrison’s first brand; Paper Denim & Cloth, which was revolutionary for its time; and Levi’s Premium, among the first of Levi’s many attempts to gain a fresh foothold in the new fashion landscape. In the early 2000s Scandinavian brands, led by Nudie, gained a following in North America, helped by representation from the super agency WANT. During my honeymoon in Spain, finding Nudies in Madrid was a major goal, and I dragged my new wife on a several-hour walk just to find the small boutiques I was interested in - I know that more of you sympathize with this than would care to. ACNE (also represented by WANT) were the next to gain popularity in the US. My Norwegian friends told me that in Scandinavia, Nudie were for the douche-bro crowd, and ACNE was the jean of choice for the less objectionable, but my loyalty to Nudie - at this point ingrained - didn’t waver.

These were all gateway drugs to the Japanese denim that had been popular in Japan a decade earlier. In usual form the States were a decade behind, but our interests were stoked by retailers like Self Edge and Blue in Green, who were as much a product of the times as they were the flag bearers. Like everyone else swept up in the trend, I agonized over shrinking, stretching, and the much-sought-after wear marks, which Babelfish awesomely translated from the Japanese as “vertical falling.” Those were heady days for the raw denim crowd. Ultimately, I came to the realization - as did all of my denim-nerd peers - that forcing yourself to wait six months before washing a pair of jeans is madness. I always thought that the sizing-down-so-that-the-jeans-stretch-out stance was a terrible idea, so I didn’t have to learn that lesson at the cost of the months - even years - of testicular pain, that so many others paid.

Today, my denim collection resembles an archaeological dig site that spans the past 15 years, and has its beginning with the premium denim trend of the very early 00s. And while I am sure that my preferences will continue to evolve, I’m at the point at which comfort, or at the very least, not-extreme-discomfort, will always be a consideration. This means that the recommendations below have some breathing room through the seat front and thighs, and hit comfortably at the hipbone. Since tapered is still the standard, both are slimmer from the knee down. Generally, I like the feeling of heft in my jeans – no paper-light stretchy jeggings for me - but super heavy jeans are never all that comfortable, so jeans between 13.5 and 17 ounces, light enough to be nimble, heavy enough to have some real power, hit that sweet spot.

“Slim tapered” jeans from Big John’s “Rare” line have the minimalist trappings of designer jeans – a plain, midnight blue, deerskin indigo back patch, a placketless fly, and no gratuitous branding; and they are cut not unlike the Helmut Lang jeans that I used to think were too narrow at the hem, with a mid-rise and a tapered leg. But they are made from inky “Ransei” denim (meaning “king of denims”), which is the highest quality denim made by Japan’s “first” Americana-inspired denim brand and is designed to fade in an extremely attractive manner. I hesitate to describe them as versatile, since that’s only a few steps away from suggesting that they will go from “the boardroom to the bar,” but I will say that all of the very different people to whom I’ve recommended them have liked them.

The other pair I frequently wear are even more of an amalgam of the trends of the last fifteen years than the Big Johns: a collaborative project (collaborations went from novel to ubiquitous between 2003 and 2006) from American retailer Blue Owl and Japanese manufacturer Momotaro; the very precisely-named (and discontinued) BOM005 (the closest analog is now the BOM008). The “modern,” mid-rise, tapered cut is borrowed from its sister brand, Japan Blue, and the heavy denim appeals to both denimheads and fashion customers alike, with weft threads (the colored threads in a jean) that are nearly black when first worn, and fade to a dark indigo with wear. They also have a black leather patch – plain or tonal patches seem to be popular with the minimalist set these days – and instead of the typical contrast stitching, the thread is tonal save for the single line of pink running along the inseam.

These two pairs take me through most days. Not a decade ago, I would have recommended a much lower rise, tighter jean, possibly in the a heavier denim. Those cuts and weights still exist, and there is always a race towards the heaviest possible denim, but as a retailer once said about super heavy (18-ounce and greater) denim, “that’s for kids.” I do have a pair of 23-ounce jeans that I wear when I get nostalgic for the age of sick fades, though. Jeans, after all, are about the memories.


Back to the Brief​

I might have mentioned APC as the brand that really got raw denim into the semi-mainstream, and their fit patterns (NS/PS/PNS) are still the benchmark, whatever you might think about their denim quality.
I probably should have mentioned APC, and how their fits shaped and mirrored the trends. The New Standards used to be thought of as really slim, and now, I hear about it as a "relaxed straight leg." And the really roomy Anglaise cut, one of the APC originals? Long gone. Maybe in a future article.

Fok.
"Blue Denim in their Veins"

Follow our Instagram
Like our Styleforum facebook page
Follow the Styleforum twitter feed
Follow the Styleforum tumblr
​
My denim history is similar to yours... Nudie ,APC,N&F,RRL,PRPS,etc,etc... I was into ball busting fits, jean wear patterns, and all that craziness. My parents, girlfriends, and friends thought I was a nut... I still wear raw denim but have been extremely happy with a pair of 1969 Gap Straight fit jeans that I bought on sale for $30 bucks...
Not gonna lie, I still get spendy with denim, but I now require that the fit be at least somewhat comfortable. A pair of jeans must button up comfortably, if snugly, on first wear, or I probably won't buy them.
"Blue Denim in their Veins"

Follow our Instagram
Like our Styleforum facebook page
Follow the Styleforum twitter feed
Follow the Styleforum tumblr
​
Great read, thanks. I was initiated into the raw/selvedge world at the APC surplus store that used to be in Brooklyn. It was 11/09 and until that point I was always struggling to find denim that had right fit and feel.
The APC guy gave me the rundown on their vanity sizing, how raw should fit upon purchase, wash techniques etc...I was stoked.
I walked out of there, more like a Frankenstein shuffle, with an incredibly stiff pair of the Rescue (relaxed) cut, never looking back on inferior denim but kinda ruined by the classic "denimhead" information I was given.
The next few years were spent trying different brands, always buying a size or two too small in fear that they will stretch into clown pants due to the info I was initially given and what I kept reading and hearing from my local denim store guys. Suffice it to say it took me awhile and several pairs later I'm buying my original waist size and not spending half a day doing deep knee bends trying to get some size back after their first soak.
NWT Epaulet x Hertling Trousers Taylor Fit Navy and Olive Size 32
https://www.styleforum.net/buyandsell/epaulet-x-hertling-trousers-taylor-fit-32.10328/
New posts