Yeah, there are a lot of my friends and aquaintences in this list. Also, a lot of Styleforum posters. I don't think it has very much to do with bias. If there were such a thing as objectively good outfits, I think these guys would be wearing them. If you know Pitti, then you may notice that these are not as flamboyant as the pictures of the usual suspects, lined up on the infamous "Pitti wall." This is more my kind of crowd, I guess:


1. David (@unbelragazzo ), one of Styleforum's editors-at-large, had picked up this Musella suit the day before. Perfect proportioned, lovely navy wool, single breasted with peak lapels. This was one of my favorite outfits from Pitti, even though I don't necessarily subscribe to the idea of "less is more" in every instance. You have to recognize excellence when you see it. 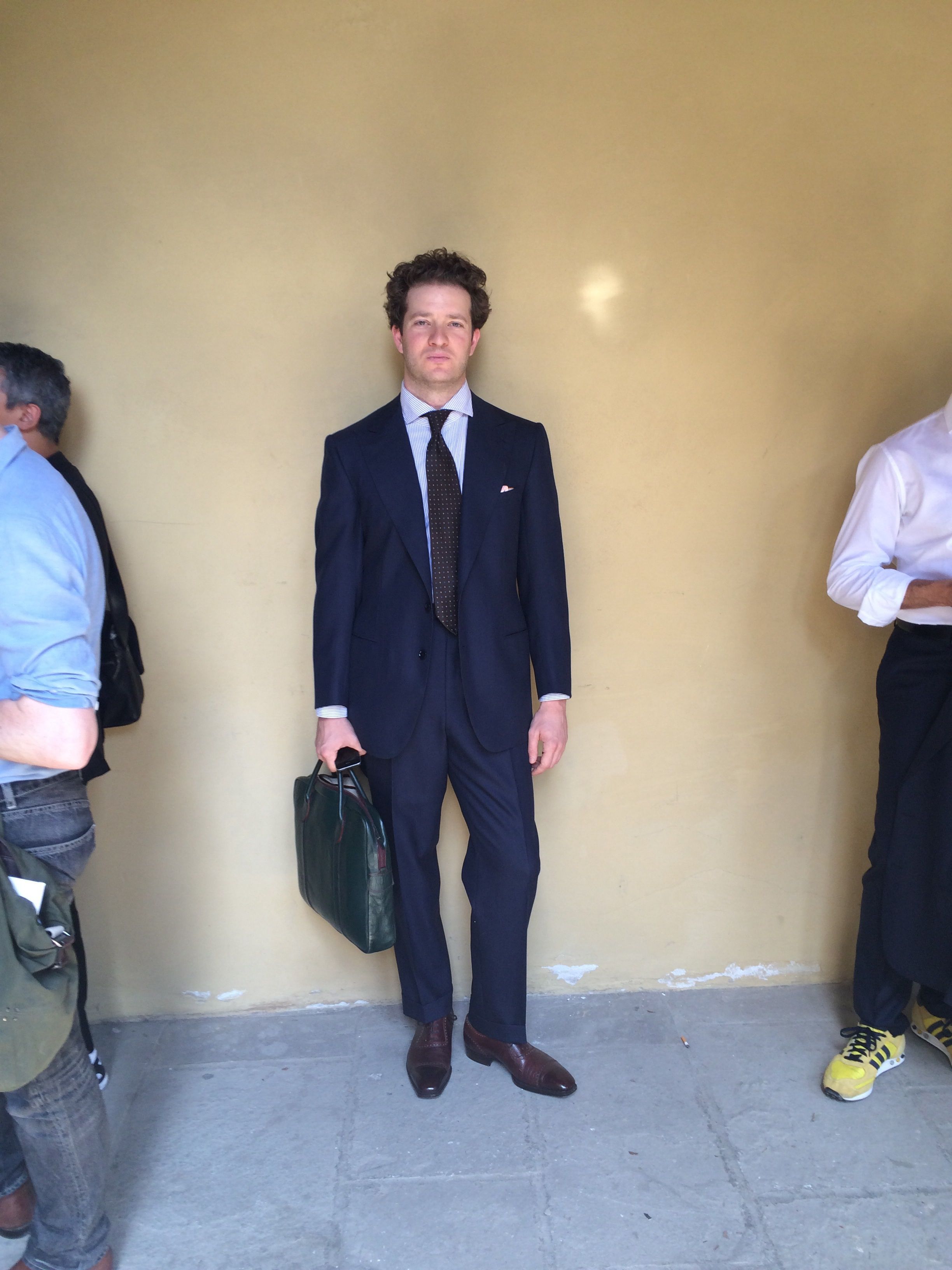 2. Niyi (@Tirailleur1 ) was wearing a prototype shirt from his coming S/S 16 Post Imperial collection, together with one of their ties, all dyed in the traditional Nigerian adire technique. All of it went perfectly with a Post Imperial x Larose hat. Niyi is constantly one of my favorite dressers, because he takes the old cliche of "mixing up classics" and actually makes it look awesome. 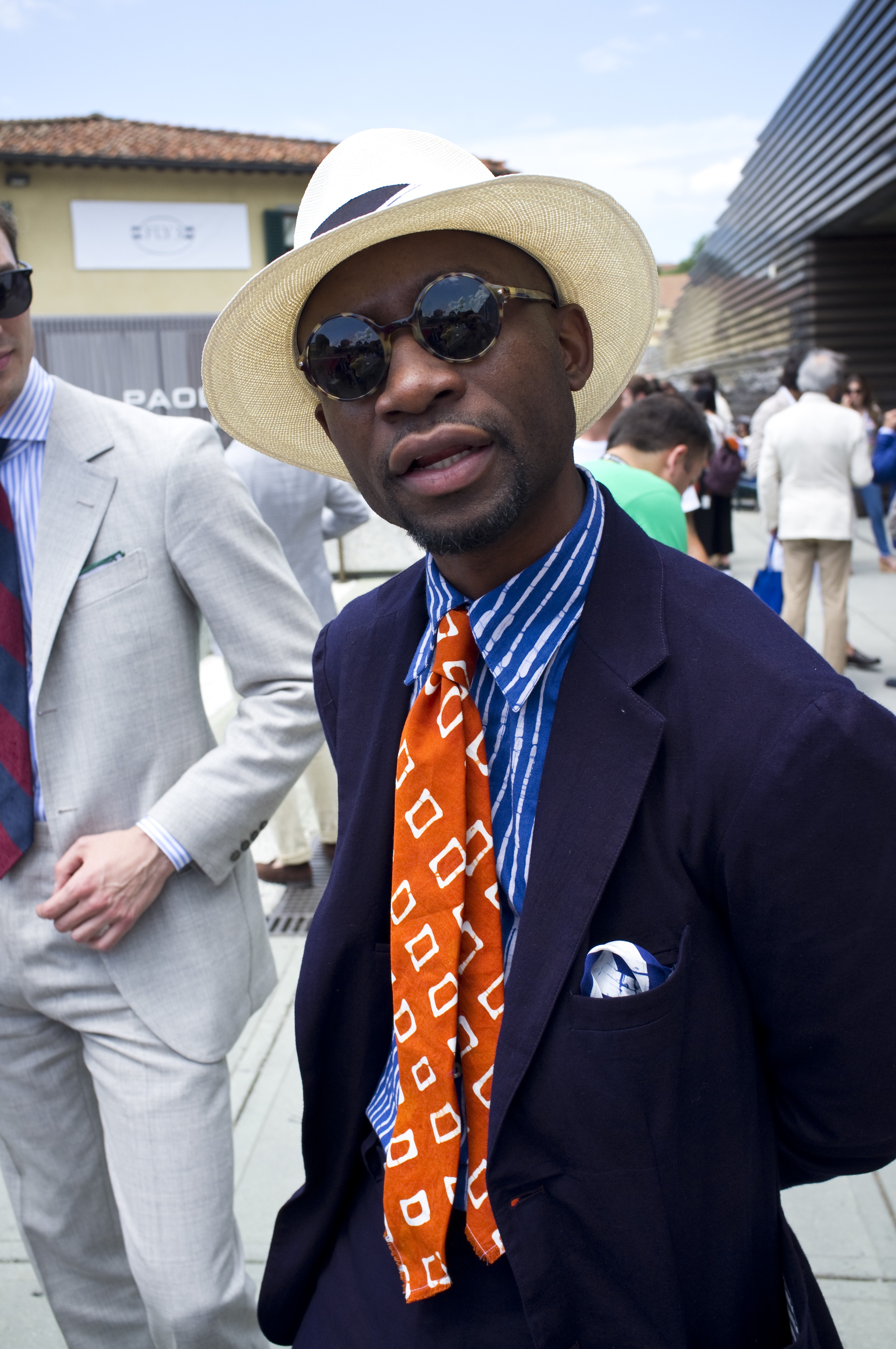 3. Zing Chen, the owner of The Firense China. I'm pretty sure this guy has posted on Styleforum as well, which means we're three for three so far. I like this for a few reasons: it's really well cut, it's simple but far from boring, and it's an example of great summer colors. 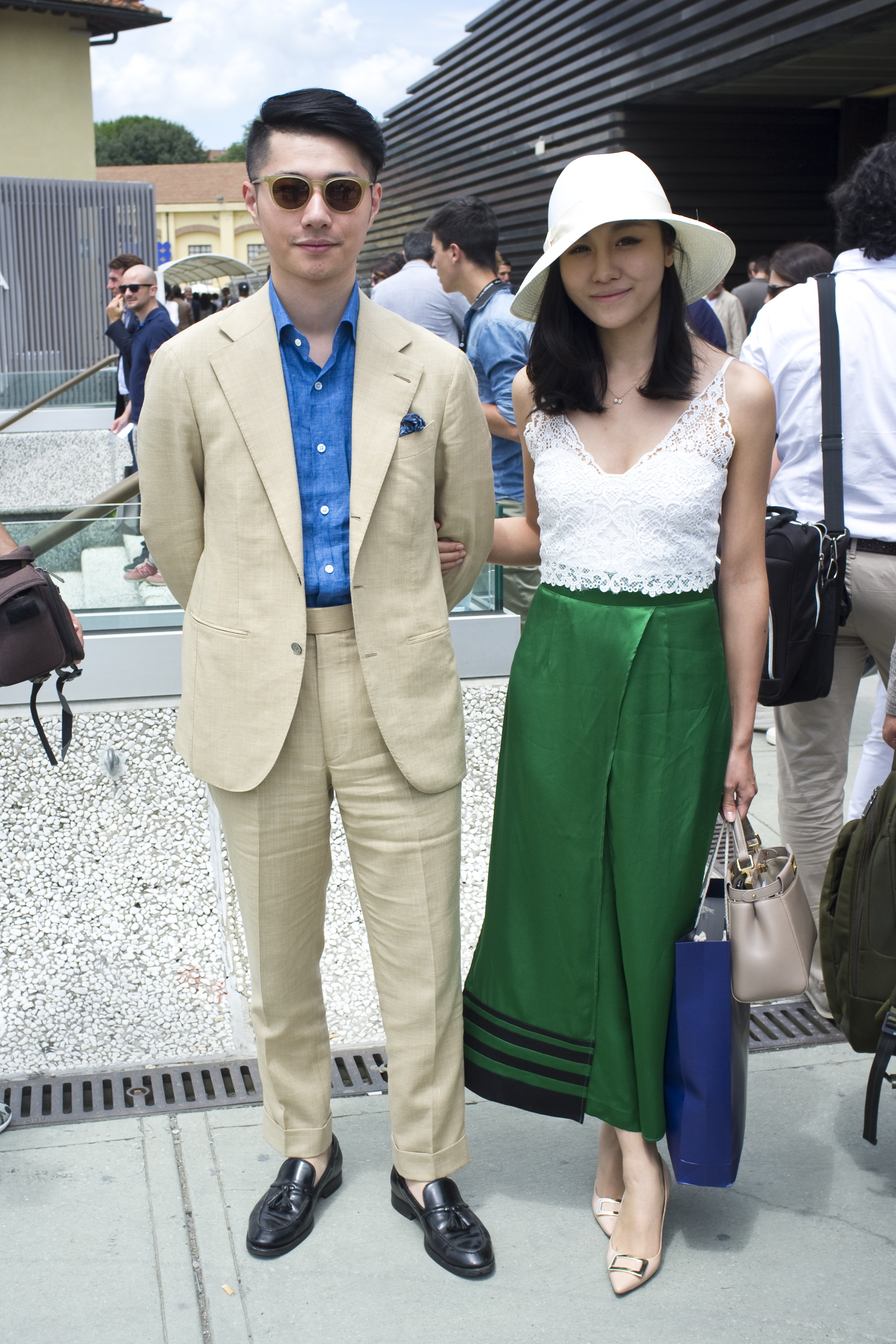 4. Robin Pettersson, a Swedish tailor who works with B & Tailor, D'Avino Napoli shirts, and Edesim Napoli tailors. He's wearing a unconstructed navy Minnis fresco suit from B & Tailor. I personally think this particular suit calls out for a pair of socks, but everything else is just great, from the Alfred Sargent tassel loafers to the Shibumi linen tie. 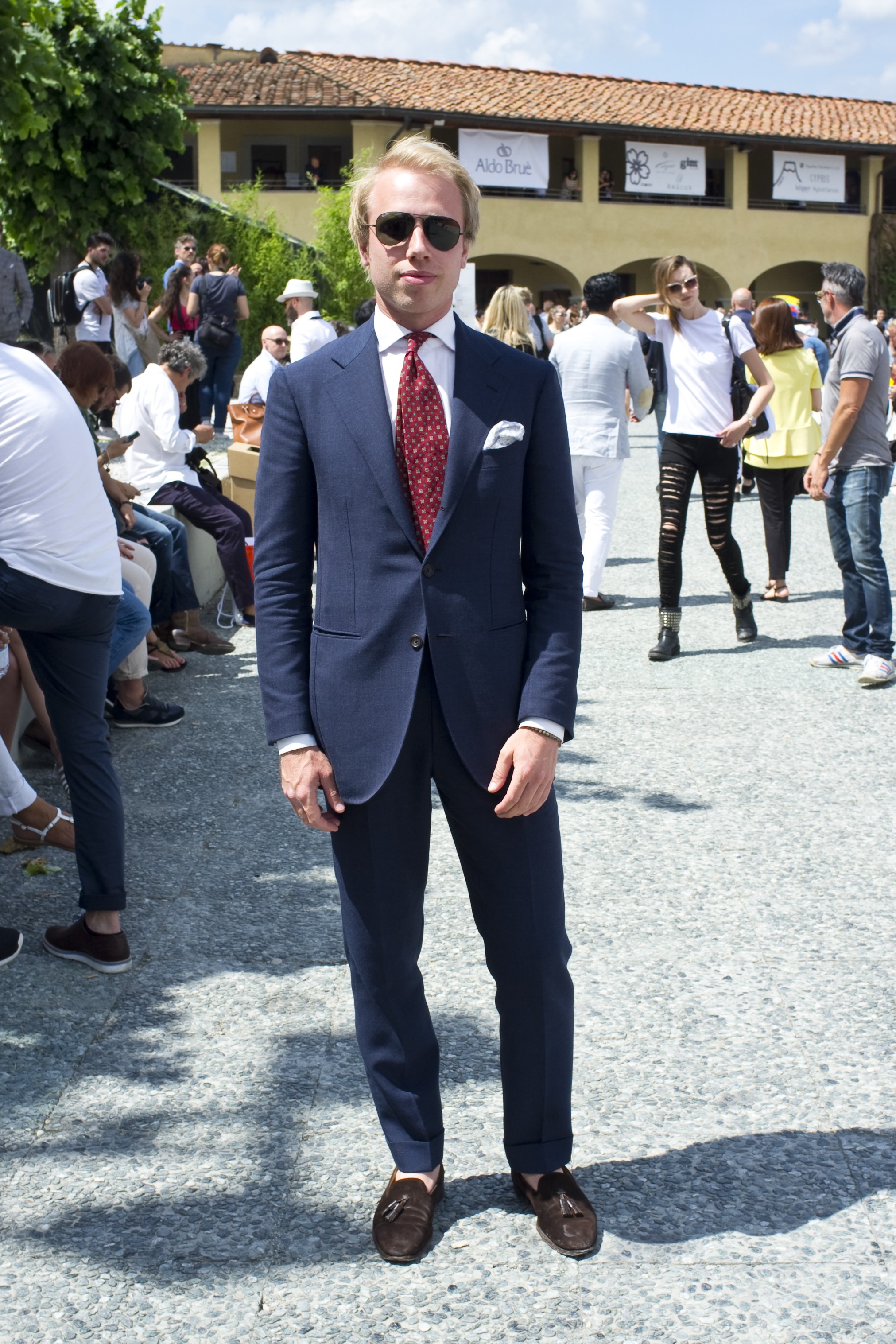 5. Niels (@Sander ), of Shibumi ties, is a guy from whom, after you've met him a few times, you come to expect nothing less then excellence. I guess he just dresses with the kind of precision you'd expect from a German; meticulously color-coordinated and perfectly cut. In a sea of bright colors and attention-grabbing trinkets, he still stands out. 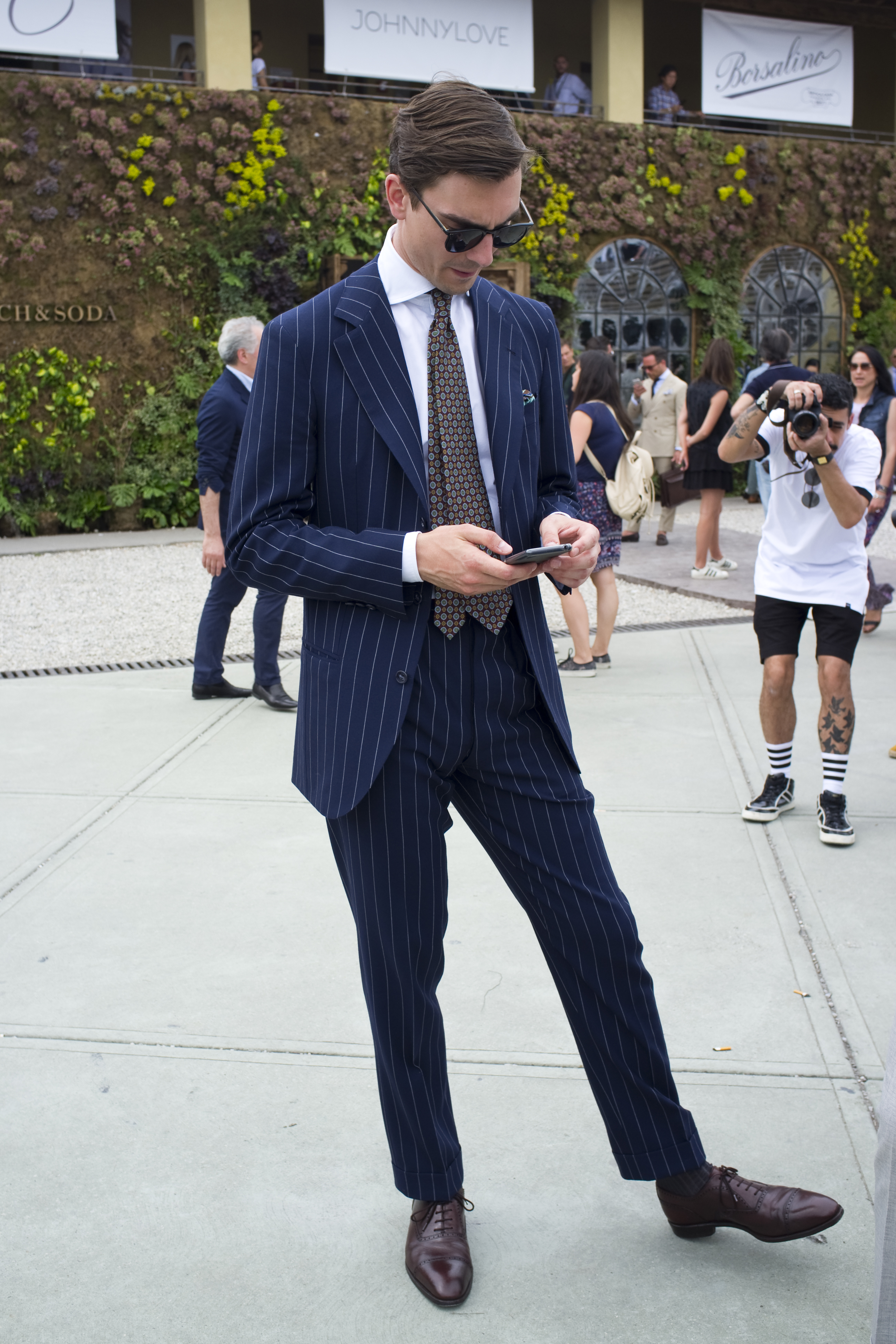 6. Benedikt (@Braddock ), the other half of Shibumi ties, looking slightly more peacock-ish than his business partner in a sport coat he picked up just the day before in Naples - and of course, a Shibumi Panama hat and tie, and Vass x Shibumi suede oxfords. This is nicely restrained and well put together in a pleasant scale of complementary colors. 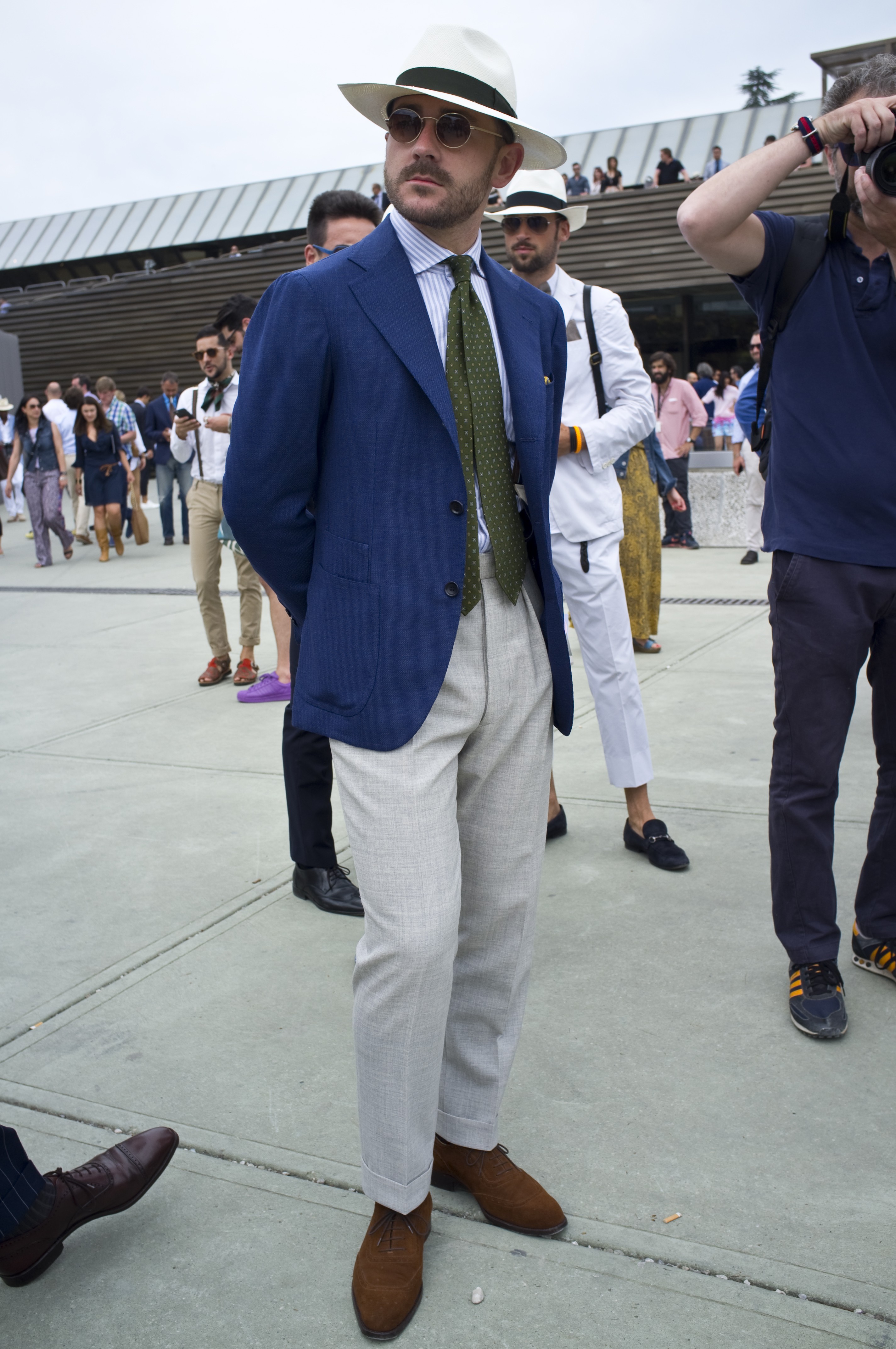 7. Mikolaj (@ammanati , on the left) is the kind of guy who never seems to wear anything by chance. Being an engineer, he has the kind of technical interest in menswear that can either distract you from the aesthetic values of clothing, or make you more fully appreciate them. I think Mikolaj is a great example of someone who does the latter. (With our friend Allan Baudoin, shoemaker) 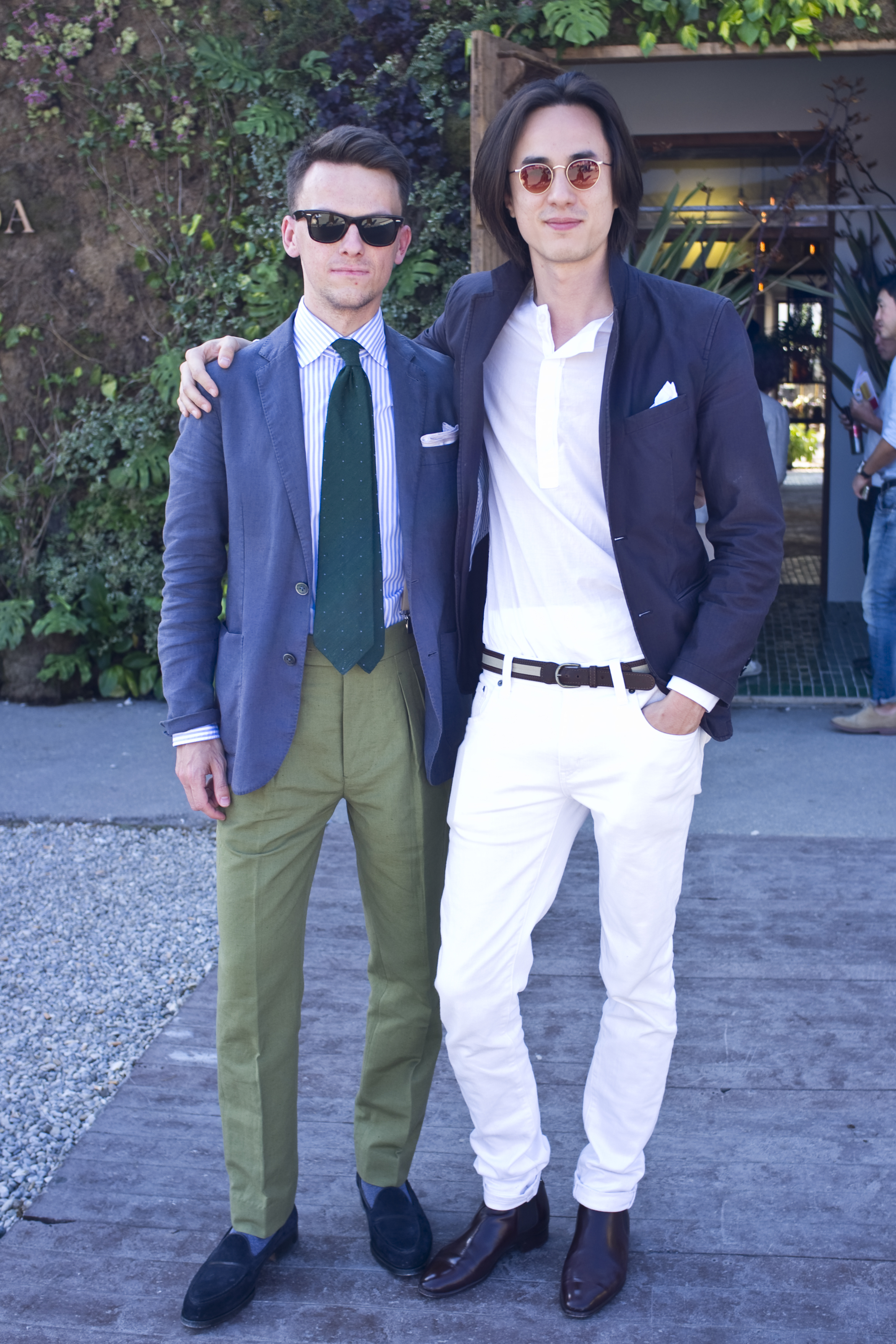 8. Simon Crompton, of the leading menswear blog Permanent Style, who arranged one of the best events during the week. He is wearing a lovely brown linen suit, which sums up everything I love about a good linen suit: it's wrinkly and casual, while still being sharply cut. Perfectly accessorized with light blue shirt and a navy tie, which keeps it from looking murky. 9. Charley (@Mr. Claymore ) is one of the funniest guys we met at Pitti. He also never dresses in anything but 3-piece suits - and everyone who knows me knows that I love me a good 3-piece suit. I particularly liked Charley's, since it had a lot of nice safari inspired details, like a belt, action back, and patched pockets with flaps. The best thing about it is that he wears it with the right kind of gravitas. If you're gonna wear a 3-piece, you've gotta look comfortable in it. 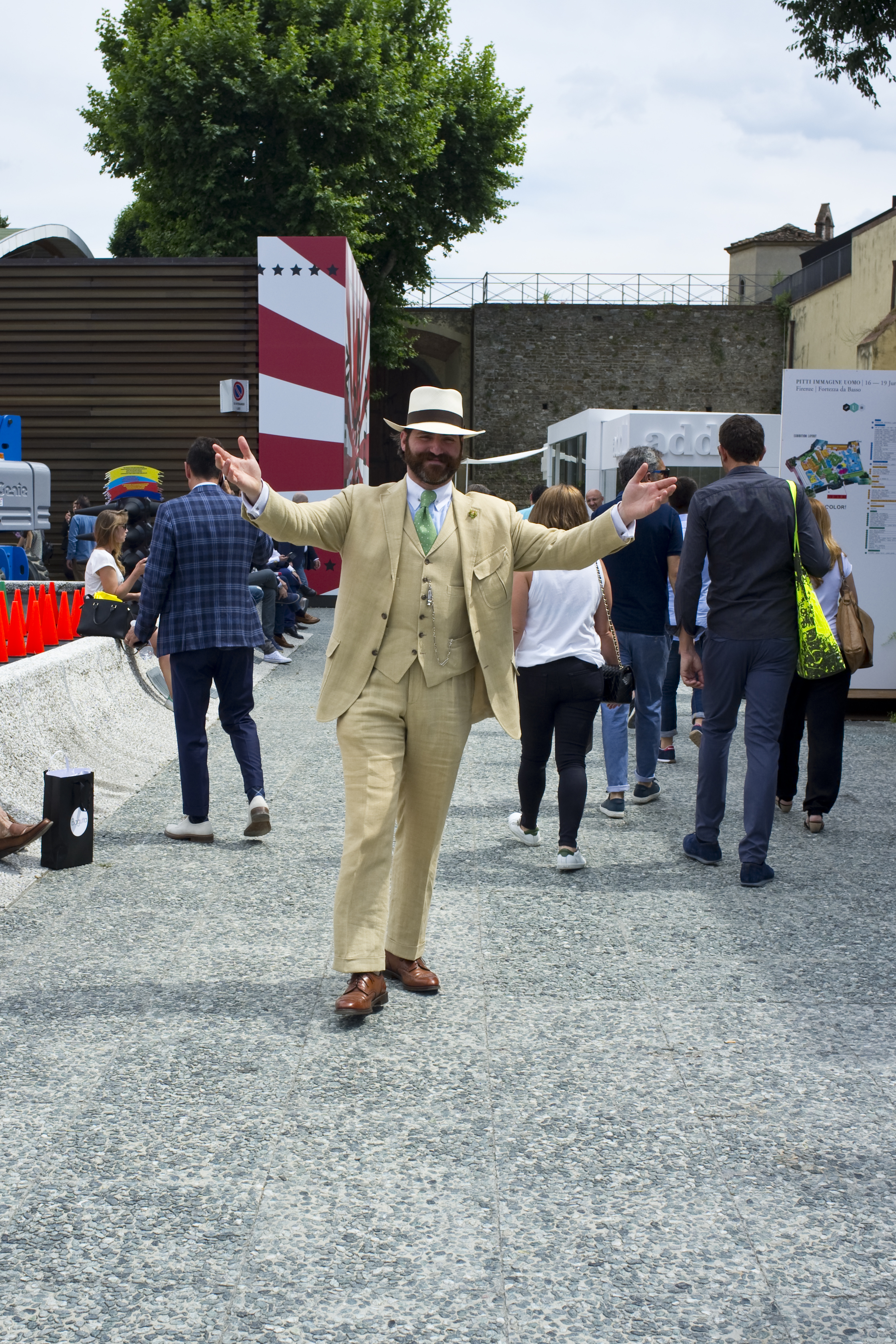 10. Jamie, photographer at Drakes, and a pretty low-key kind of guy. He is the type of photographer who strikes you as not wanting too much attention directed at himself. I guess his getup mirrors this personality trait, as it's downplayed and with a subdued colour palette. I think as far as having a truly personal style, Jamie has come long way further than a lot of the more colorful visitors of Pitti. 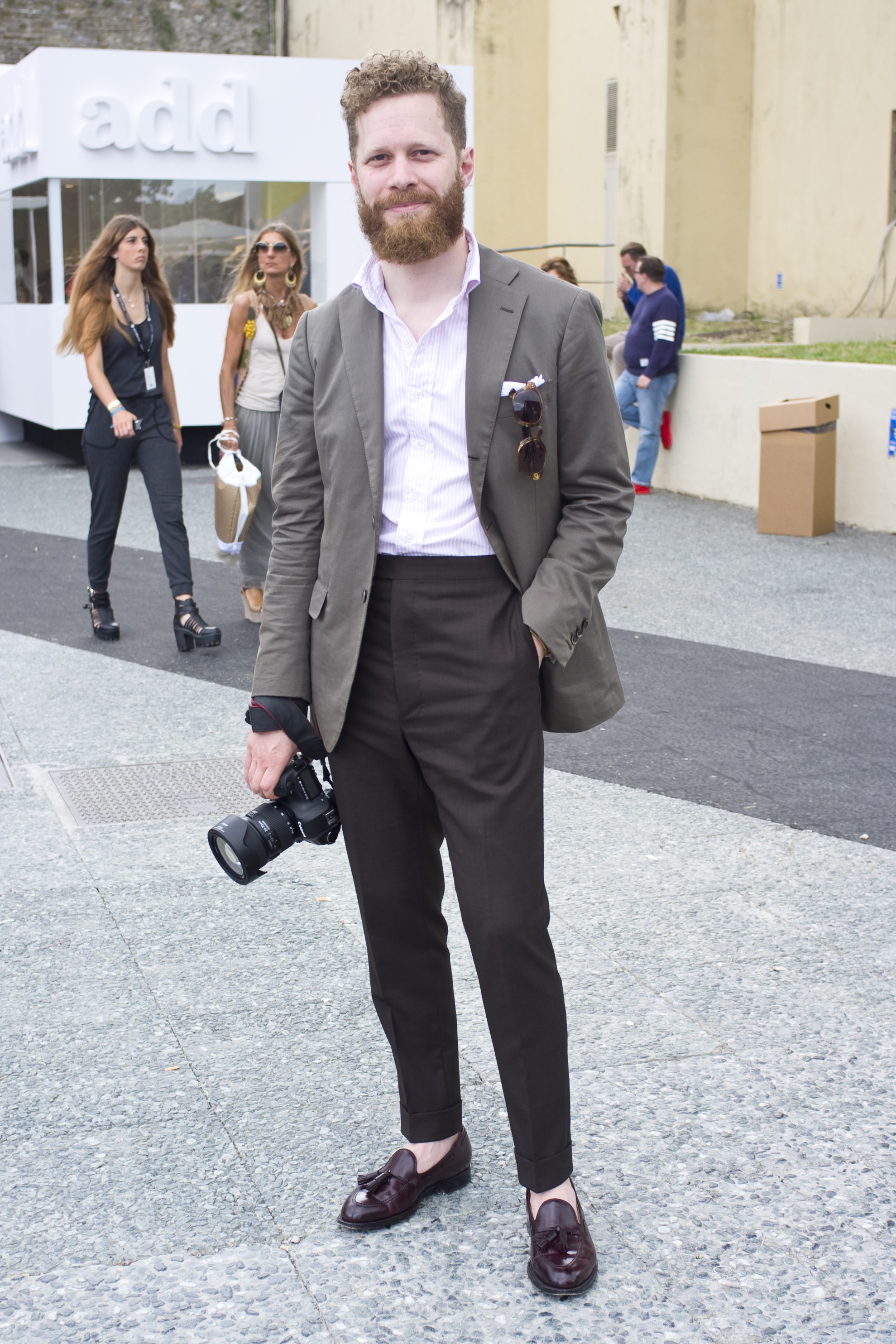 I hope you enjoyed my top picks! If you want to see more, you can check out this thread, packed full of all the pictures I took in Florence.

Great picks, great pics, thanks @EFV
Simon Crompton just looks a mess.
Did you see anyone, aside from possibly "Charley" who wore a size larger
than 40R/L ?
I have no idea why Charley is put in quotes. Charley is his actual name.
/Erik
Editor in Chief of Plaza Uomo - Premium menswear magazine, distributed in 48 countries world wide.
Co-owner of Götrich tailoring house (est. 1730) & Baron Bags (est. 1978)
Co-founder of Pete & Harry.
Instagram
Crompton doesn't look messy, its linen. Think I would prefer a heavier linen though for more drape/rolls rather than sharp creases
You must log in or register to reply here.
New posts