Thin White Duke said:
Good pic Luigi and the suit looks good. That’s a summer staple for me.
I myself tend to favour slim cut strides but if I had one critique of your pic, which might be what makes you think the suit is cut for a younger man, it’s that having strides cut sooooo slim at the bottom makes your feet look huge and throws off the balance of the look. If they had a couple more inches in width (I think most of mine are approx 8 inches flat = 16 inches all around) the front of your crease would fall around the far end of your shoes’ lacing which creates a more balanced appearance.
Anyway keep ‘em coming!
Click to expand...

Thank you TWD, point duly noted.
I'm actually getting a wider hem, on my new suits, than those I used to get once. Fact is, I'm the miserly brother of Ebenezer Scrooge and before throwing away a suit it must fall to pieces. Maybe putting on weight will help me to accelerate the process ...

Is there enough spare to get it altered? My favourite suit - a POW check from Pakeman et al - was getting too tight around the waist but fine elsewhere. I had it altered and it was brilliant. Did the same with some nice mole skins too.
Mind you, my girth has shrunk a bit recently so they are probably too roomy.
L

Sadly, all that could be let out has already been ... Time to break piggy bank

Luigi_M said:
Thank you Mr.K. My suit is 86% cotton 14% silk, but gratefully it has no sheen, and holds creases well. It would still be perfect if two sizes more.

I never did WFH even in the worst period two months ago.
I work in a small law firm and these were allowed to stay open. Anyway there were a lot of Police controls on people driving around, to get sure that the restrictions were complied to.
I was stopped two times, both late evening: once by Police on my way home, and they asked me show, other than car and insurance documents and my driving licence, the badge my Bar Association issued me (note that the latter is not an official document, as it's not signed by any public authority); once by the Carabinieri of the town where I work who, as I got off my car and they saw my face, rendered me a sharp salute and said "it's all ok sir, see you!"

Of course I could have gone office in a sweater and trousers, if I wished, but I almost always wore a suit, just for the pleasure of dressing up.
It's worthy note that in a few years we passed from 'casual fridays' - which I already disliked - to 'formal fridays'.
Mala tempora currunt and it's up to 'a few good men' to show that being comfortable doesn't necessarily mean dressing like a slob. As TWD says, "someone has to take a stand".
Click to expand...

That’s a good story Luigi. There’s a common myth going around that if you’re well dressed you’ll get upgraded on an aeroplane. I find this highly suspicious as I used to date a flight attendant and there’s a strict hierarchy as to who gets upgraded, based on frequent flier status etc.
But that’s not to say that perks don’t exist. People often respond favourably when you’re well dressed, from not being charged for extras at various airport kiosks and hospital canteens, to getting careful attention from the baggage handlers when I have to gate check a bag, to getting rental car upgrades and on and on. Last time I flew as I was walking through first class to get my seat in coach a fella around my age looked up and said “that’s a phenomenal jacket man, phenomenal!” (I think it was the purple tweed!). It’s nice to have your efforts rewarded!
Check this out:

Thin White Duke said:
That’s a good story Luigi. There’s a common myth going around that if you’re well dressed you’ll get upgraded on an aeroplane. I find this highly suspicious as I used to date a flight attendant and there’s a strict hierarchy as to who gets upgraded, based on frequent flier status etc.
But that’s not to say that perks don’t exist. People often respond favourably when you’re well dressed, from not being charged for extras at various airport kiosks and hospital canteens, to getting careful attention from the baggage handlers when I have to gate check a bag, to getting rental car upgrades and on and on. Last time I flew as I was walking through first class to get my seat in coach a fella around my age looked up and said “that’s a phenomenal jacket man, phenomenal!” (I think it was the purple tweed!). It’s nice to have your efforts rewarded!
Click to expand...

This is very true, as I - and I think other properly dressing gentlemen - have often experienced.
Anyway my little story has another, less flattering to me, meaning.
You must think that I work in a little town, for a firm whose boss is highly considered by locals, and I'm known for being, more or less, his right hand.
So the consideration I got from the Carabinieri falls under the latin sentence 'gallus in suo sterquilinio plurimum potest' (that you might translate as 'every rooster is the lord in his dunghill') ...

A not-so-formal-Friday today, but still trying to maintain a certain standard in seersucker and linen: 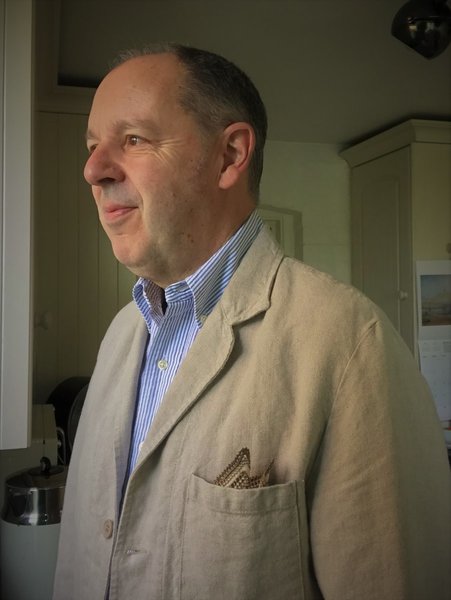 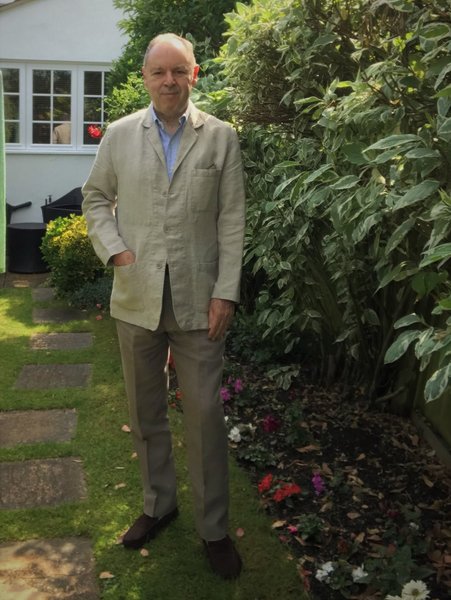 Here's a little less extreme suit I've been wearing for years.
Bought for a breeze in sale, it's 55% cotton and 45% linen and, while still quite slim, at least doesn't squeeze me too much.

Hope it might be held as a sample of (my) look going on and be in line with this thread.

Cheaney oxfords, in brown suede to tone down a little the austerity of the suit and MiE tie; and, of course, my beloved and oh-so-comfortable suspenders.

Yeah similar to yours I have a navy suit in heavy Irish linen which has a very open weave. Old J Crew via eBay for a fraction of the retail price. You can dress in business formal, as austere as you want, but enjoy the better comfort of linen in the heat.
Check this out:

Interesting that we have embraced linen over the years ( I guess it’s always been part of your wardrobe @Luigi_M ). When I was growing up suiting was much heavier and usually wool in some form or other.

The 1980s proclaimed ‘creased linen is In!’ Since then I have gradually tried to embrace it. I noticed on the ‘new thread’ one or two detractors. Not surprising in a way when the crumpled look appears at odds with our usual philosophy that sharp is best. I have found that to obtain a linen fabric that behaves well, you need to go for something heavier, which appears to defeat its purpose to some extent.

How do you guys approach it?
Last edited: Jun 27, 2020
tumblr - http://mrknightleys-stuff.tumblr.com
Instagram - www.instagram.com/mr_johnknightley/​

Mr Knightley said:
How do you guys approach it?
Click to expand...

I avoid it - apart from handkerchiefs and table cloths.

I have only just got round to cotton jackets of the Keydge variety. I still have doubts about those. Beige ones can age retired folk, though I wore the jacket today and it is certainly comfortable at this time of year.

On a unrelated note - and while Clouseau is not around - I note that radio 4 are running Jane Austen’s Emma in 15 minute episodes. I heard one in the car yesterday.

I studied this at school. How the gentlefolk used to live. I could not help thinks about the ‘two ladies’ characters in ‘Little Britain’ though.

I do like the feel of a linen jacket, thought the crumpling is certainly an issue - especially if you forget to take it off before sitting in a car.
I like the linen shirts in this weather. The most comfortable are also quite voluminous so I do feel like I should be swashbuckling down a staircase in them.
I only have one pair of linen non-suit trousers which again are pleasant to wear but crease as soon as I look at them. My linen suit has had little wear in this country - I think my lady colleagues greeting me with 'The man from del Monte, he say yes' made me a trifle self-conscious. Much better for wearing in e.g. Italy.

I think 'Emma' is my favourite. It has the best heroine and probably the best lines. I first paid notice to Austen when the BBC did versions of them in the early 80s. I was prepared to hate them but enjoyed them and read my mother's copies. It may have helped that I didn't have to read them at school. All the novels I remember studying seem to have been American, including 'To Kill a Mockingbird' - which brings us back to the linen suits. Interesting that a report in the FT of seersucker - Finch's other go to - gives seersucker's crease resistance as an advantage over linen.
Last edited: Jun 27, 2020

A long way from the Look - Jane Austen! I have just read Mansfield Park, which completes the set for me.

Emma was the first one that I read and of course inspired my username here. But my favourite story remains Persuasion. The slightly older heroine has a beautiful mind!
tumblr - http://mrknightleys-stuff.tumblr.com
Instagram - www.instagram.com/mr_johnknightley/​

Mr Knightley said:
A long way from the Look - Jane Austen! I have just read Mansfield Park, which completes the set for me.
Click to expand...

I really disliked Fanny Price which spoiled this one for me..

Swampster said:
I really disliked Fanny Price which spoiled this one for me..
Click to expand...

Me too - so tedious. Despite not liking her or many of the other characters, I found myself enjoying the book. I was left wondering if liking / relating to characters is a prerequisite for enjoying a story. Until then I had rather thought it was...

Thinking about Jane Austen and the Look, there is actually a link for me, albeit a rather tenuous one. I always loved the Regency period - imagine just being a dandy and nothing else - and was drawn to the many references to fashionable society in her books. I was not disappointed when I came to read them.
tumblr - http://mrknightleys-stuff.tumblr.com
Instagram - www.instagram.com/mr_johnknightley/​