I am about to order my first Janzen and I plan on sending a shirt his way for reference purposes. After losing some weight I don't have any shirst that fit perfect and this is my best one. Please let me know your thoughts on what changes I should ask for based ont his shirt.

Please note I am not into the "super fitted" shirt as I am not the thinest guy. 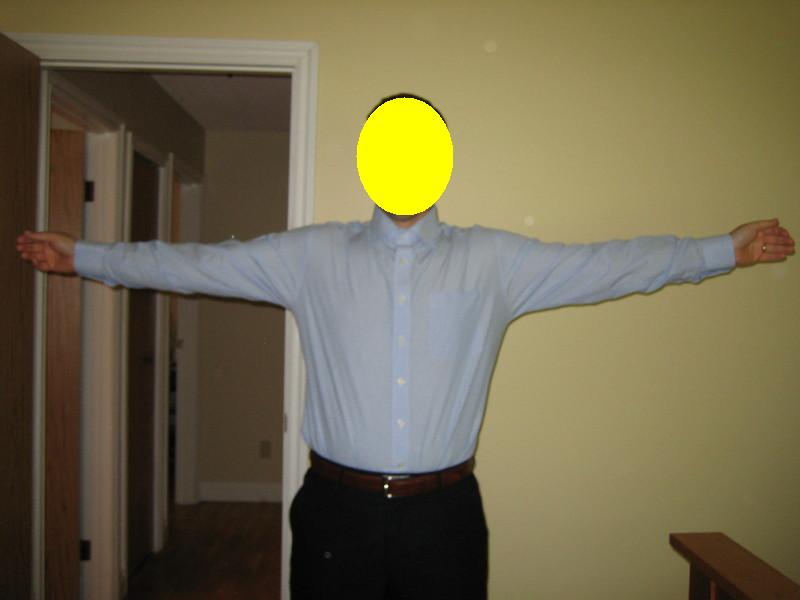 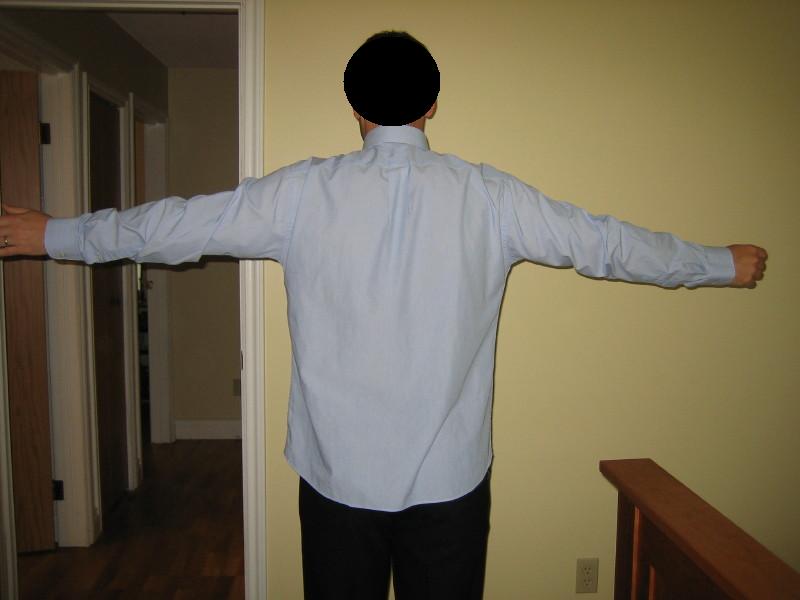 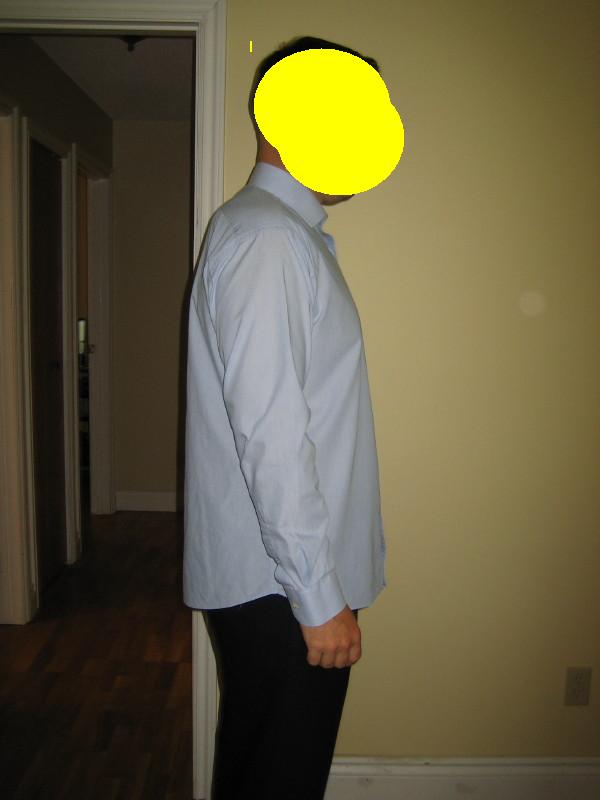 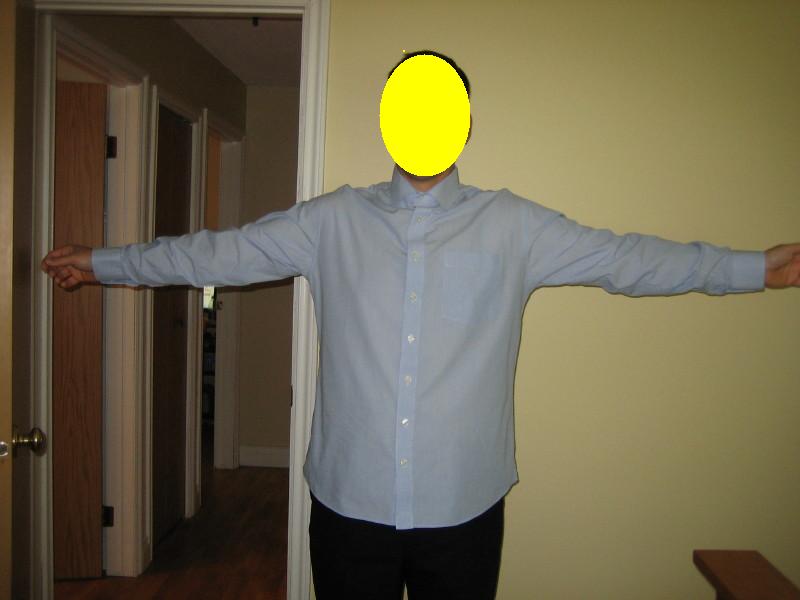 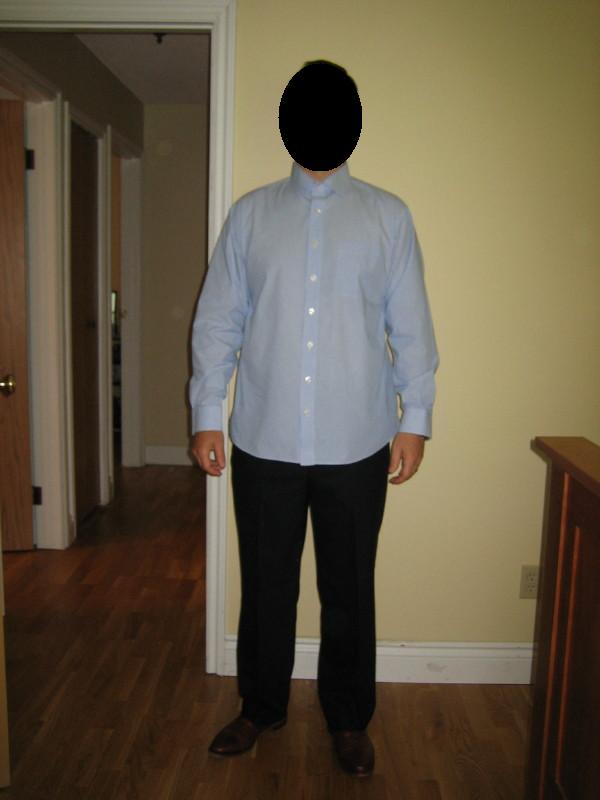 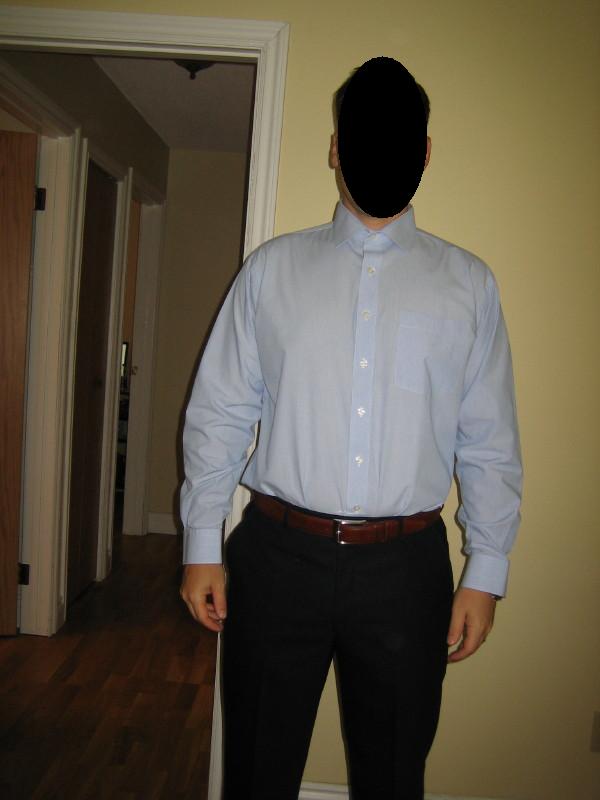 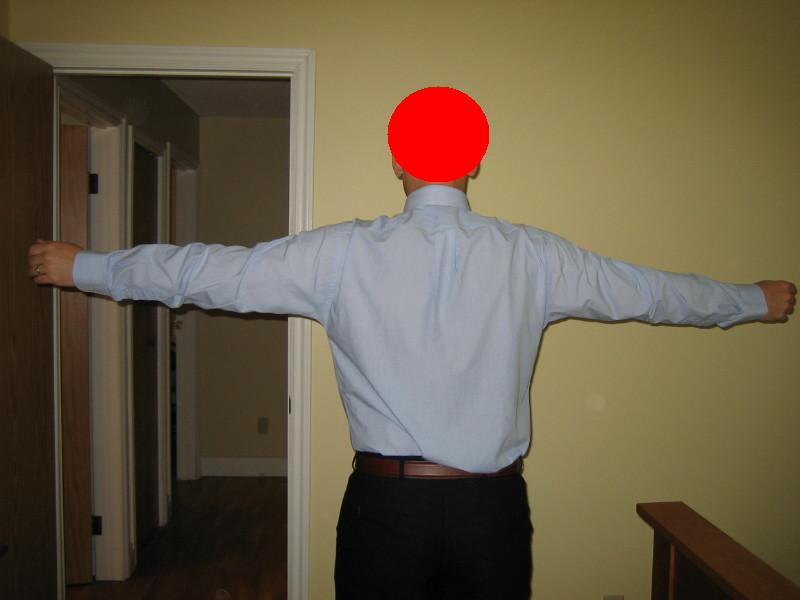 Looks pretty good. I personally perfer a more tailored look, so I would bring in the chest and waist some, but it depends on the look you are going for.

Shoulder too wide and scyes too large... could stand to reduce size of sleeve, chest, and stomach. Yoke should contour better to your shoulders... maybe split and mitered. The collar looks a little large and the sizing does not seem to work well with your neck, head, and body. You decided on the shape, but the height etc doesn't look right.
âOne should either be a work of art, or wear a work of art.â Oscar Wilde

Shoulder too wide and scyes too large... could stand to reduce size of sleeve, chest, and stomach. Yoke should contour better to your shoulders... maybe split and mitered. The collar looks a little large and the sizing does not seem to work well with your neck, head, and body. You decided on the shape, but the height etc doesn't look right.

what is a mitered yoke?

what is a mitered yoke?

This is a split and mitered yoke:

Shoulder too wide and scyes too large... could stand to reduce size of sleeve, chest, and stomach. Yoke should contour better to your shoulders... maybe split and mitered. The collar looks a little large and the sizing does not seem to work well with your neck, head, and body. You decided on the shape, but the height etc doesn't look right.

You have a hell of good eye! For the record this shirt was made for me about 55lbs ago, and since has been taken in about 10lbs ago. The neck as you stated is too large for sure. I also agree that I could trim it up all around and the arms look to large.

I am interested in some info on the collar, I am fond of that style of collar - do you think it too small for my neck or I shoudl get away from a partial spread?

Here is close up of the collar for better reference. 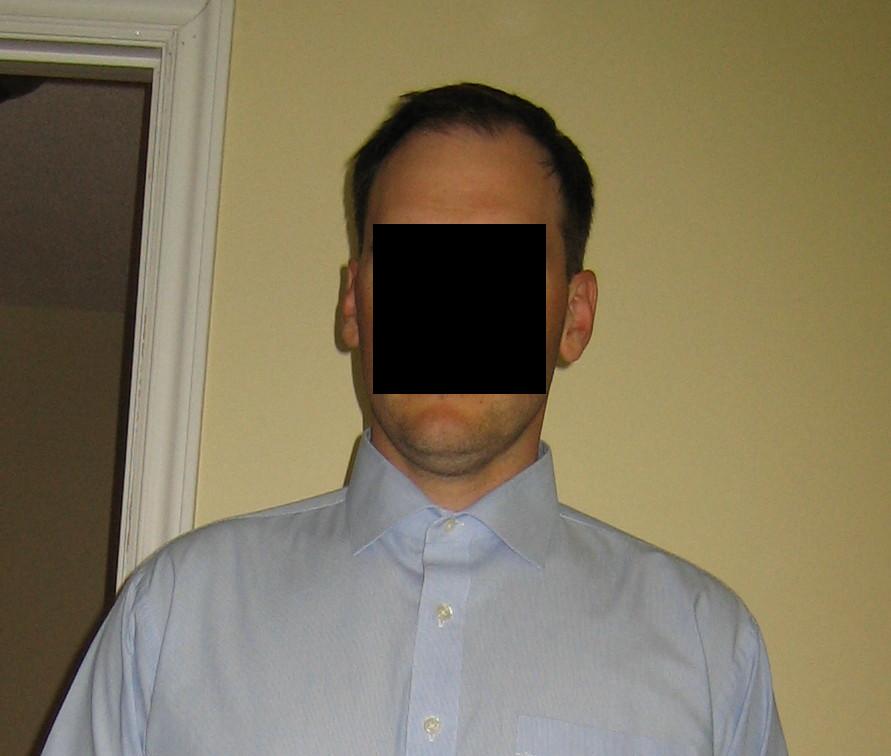 Shoulder too wide and scyes too large... could stand to reduce size of sleeve, chest, and stomach. Yoke should contour better to your shoulders... maybe split and mitered. The collar looks a little large and the sizing does not seem to work well with your neck, head, and body. You decided on the shape, but the height etc doesn't look right.
I think a photo of the back without arms outstretch will show better if split yoke is required. Yes, it looks as if with arms outstretched, the shoulders don't contour well. But it may be due to the outstretched arms. I personally do not like split yoke. I do agree that the armscyes are too large. Bring in the waist and narrow the armscyes. But don't overdo it. Your body needs some concealing in areas (let's be honest with ourselves). Too "fitted" and it may look odd. EDIT: To the recently posted collar close-up: the collar is too large. Reduce by about an inch or two?

thanks for the pic. i definitely know what a split yoke is, but i'm just not sure on the mitered part, as i've only heard this term used when describing shirt sleeve cuffs. would you mind pointing out how your pic is different from a normal, non-mitered split yoke? thanks!

I do agree that the armscyes are too large. Bring in the waist and narrow the armscyes. But don't overdo it. Your body needs some concealing in areas (let's be honest with ourselves). Too "fitted" and it may look odd.

EDIT: To the recently posted collar close-up: the collar is too large. Reduce by about an inch or two?


I agree, I don't have the body to go too fitted and would not plan to.

As for the collar it is too large by about 1.5". The shrit was made when my neck was much fatter. I am looking for comments on the style fo the collar for my neck/face.

It looks like I may have to give Jantzen my body measurements and see what Ricky can come up with as working off the shirt may cause more problems then it is worth.

Well we are here - how would you describe the slope of my shoulders? I am thinking regular?

This brings up a great question... split/mitered yoke's advantage, as I understand, is to allow a master tailor the ability to shape the drape of the shoulder to the specific client.

Kabbaz has shown - in extreme detail - how the shape/contour (and subsequently the split yoke) is ultimately the best route in creating a shirt. I will not fight that.

But if the actual shirtmaker cannot see the actual client... what's the point? Are they angling the fabric different? Bowing out the shoulder to accommodate the client's specific need? Or are they just cutting the fabric up the middle and sewing it back together with some pattern matching?

I'd argue the latter. I do not understand why Jantzen's split yoke is superior to the same Jantzen shirt without a split yoke.

Is there ANY difference... is ANY of that difference better without seeing a client? This is not a 'Jantzen' based question - I'm talking about H&H, Lewin, Pink all of them...

If you cannot see the client.. does it make a difference?

Collar size on your shirt is fairly easy to figure out. Measure your neck with a cloth tape measure. I would just report that measurement to Jantzen. They will add room for comfort and shrinkage. The standard is to be able to insert two fingers between the BACK of your shirt collar and your neck. The decision on the height of the shirt collar and its shape is important. I think you should make that decision. To help you there I have found Flusser's advice in "Dressing the Man" to be quite helpful. Here is an excerpt on selecting a collar shape:

"One of the most important but least understood functions of male attire is to lead the viewer's eye toward the face. Understanding the subtle balance that should exist between a man's most visible and expressive body part-his face-and the clothes that lead up to it is a prerequisite of fine dressing. By virtue of its proximity to the face and its configuration of angle, scale and mass no article of male apparel is better equipped to enhance a man's countenance than the appropriately shaped dress shirt collar.

The triangular sector formed below the chin by the "V" opening of a buttoned suit jacket constitutes the cynosure of a man's tailored costume. Several dynamics work to direct the viewer's focus toward this area. First of all, it is directly under a man's most animated feature, his face. Second, this triangular encasement is accentuated by contrasts between the darker jacket and lighter shirt silken tie and dulled or matte shirting etc. Again, keeping in mind that the face is that destination where one's dress should be escorting the attention of the beholder. Think of the face as a picture and what surrounds it as the frame.

Whether or not the color or pattern of a dress shirt coordinates perfectly with an outfit if its collar is too small, the head will appear large; if the collar sits too low on the neck, it will make the neck look longer than it is. The choice of a dress shirt should be guided first and foremost by the appropriateness of its collar to the wearer's face, rather than the vicissitudes of fashion or personal whim.

Choosing the appropriate shirt collar requires a bit of experimentation and a little common sense. A small picture requires a comparable frame, just as a smaller man with delicate features requires a collar of more restrained dimensions. Conversely, when the content is more expansive, the frame must enlarge to afford proper balance without distracting from the intended focal point just as large tabletops beg for ample pedestals. Heavyset or big-boned men require more fully proportioned collars. For example, former President Clinton compensates for his larger jaw with slightly spread collars while balancing his full face with generously scaled, long-pointed ones. Both Conan O'Brien and David Letterman possess pronounced jaw lines and favor dress shirts with larger-proportioned collars on camera.

The length and spread of the collar points should complement the head's contour and size. Long straight-point collars, those 3 inches or more, with little spread between their points, will extend and narrow a wide countenance, just as the broadly spaced points of a spread collar will counterbalance a long and narrow face. Long-necked men require taller collars with wider neckbands that raise the collar's height, while short necked men need lower-sitting collars with a more forward slope. The tab collar or other pin-affixed collars provide the additional height that can diminish a long neckline. The writer Tom Wolfe presents a fairly striking image with his Ichabod Crane-height collars, almost Victorian in their stiffness and grandeur, but they do camouflage his longer neck.

Collars should also counterbalance the facial structure by either softening its dominant lines or strengthening its weak ones. Long-pointed collars that are either pinned or buttoned down will help to countermand faces with angular features and strong lines. A full face that sags around the chin or cheeks demands a stiffer collar to counter-act the effects of age and gravity. While soft button-down collars are classically stylish, they are too often favored by the double-chinned set, who should expressly avoid them in lieu of a slightly firmer collar."
âOne should either be a work of art, or wear a work of art.â Oscar Wilde

Anyone have anything to add to kngrimm's response?

Anyone have anything to add to kngrimm's response?

Ok... I'll respond since I brought it up. A split and mitered (S/M) yoke is similar to functional buttons on a jacket. Both of them lead one to believe that the item is bespoke. It is easy to fake in both cases. With Jantzen, it's not going to make any difference either way. If you were in Naples having Anna Matuozzo create a gift from bespoke heaven, then the S/M yoke would make a difference. This is really not something for the OP to worry about. I would get the basic measurements right and focus on the collar style to complement the size and shape of his head and neck.
âOne should either be a work of art, or wear a work of art.â Oscar Wilde

Mitered means angled - in this case, the fabric in the yoke is joined at an angle.
A melancholy lesson of advancing years is the realization that you can't make old friends. - Christopher Hitchens

All I've learned on SF: Try Equus belts. You'll be impressed. Vanda, Drakes and Hober make good ties. If you can get to NSM and you like the Neapolitan look, go for it. Carmina shoes are well-designed. Don't spend money on working button holes, but if you must, go to Paul Winston. Lastly, cultivate a relationship with your makers.
You must log in or register to reply here.
Share:
Facebook Twitter Reddit Pinterest Tumblr WhatsApp Email Link
New posts