Words and photos by Pete Anderson

Mr. Ned owner and fitter Vahram Mateosian may be delicate with his fabrics, but he’s not with his words. Describing the potential results if one particular customer’s stylistic whims were all indulged, Mateosian says “He woulda looked like a 10 pound baloney in a 5 pound baloney bag... He was maybe 5-9, 250. Wanted narrower shoulders, higher armholes.” He shakes his head. Mateosian, who’s owned and operated the custom tailoring outfit since buying it from his father 12 years ago, claims Mr. Ned has no house cut or standard style, but works with customers on what will complement them. Some are pickier than others on the details--and he’s not afraid to point out that those customers are overwhelmingly Styleforum-referred. Most of the suits he makes, says Mateosian, are basics. Solid colors. Two button, single breasted. Business suits with a little customization and the optimal fit that comes from his measurement and two fittings after your order and before delivery of your suit. Mateosian takes only walk-ins--”I’m here,” he says. If they’re open, you’ll find him working in the shop: “I don’t go out to lunch,” he pats his stomach and smiles. “I eat lunch, but I don’t go out.”

In his time fitting and making suits, things have changed some. Not every year, though. “Big retailers, they run out of stuff to sell,” he says, neatly summarizing his opinions on fashion. Ten years ago, he was making mostly three-button suits. Now, mostly two-button. Fifteen years, ago, he was seeing a lot of double-breasted pieces; now, not many at all. I tell him he might be seeing them again in a slightly different shape than in the 1990s, probably from our advanced crowd at Styleforum. With forum customers, Mateosian says, it’s usually easier to get decisions made, because people know what they want. “But I’ll add my 2 cents if I think they’re making a mistake... They’re a little harder to take care of, but that’s what I do.” He shrugs. When there’s education by internet, Mateosian wonders, “Who’s the teacher?” With good intentions, customers sometimes request details and tweaks, and don’t understand how those choices can affect the rest of the jacket. “So I tell them if we can do it or not.” Over the years, Mateosian has also seen an uptick in women customers, mostly referred by their boyfriends or husbands, but confides that women’s clothing is not his favorite thing to make. 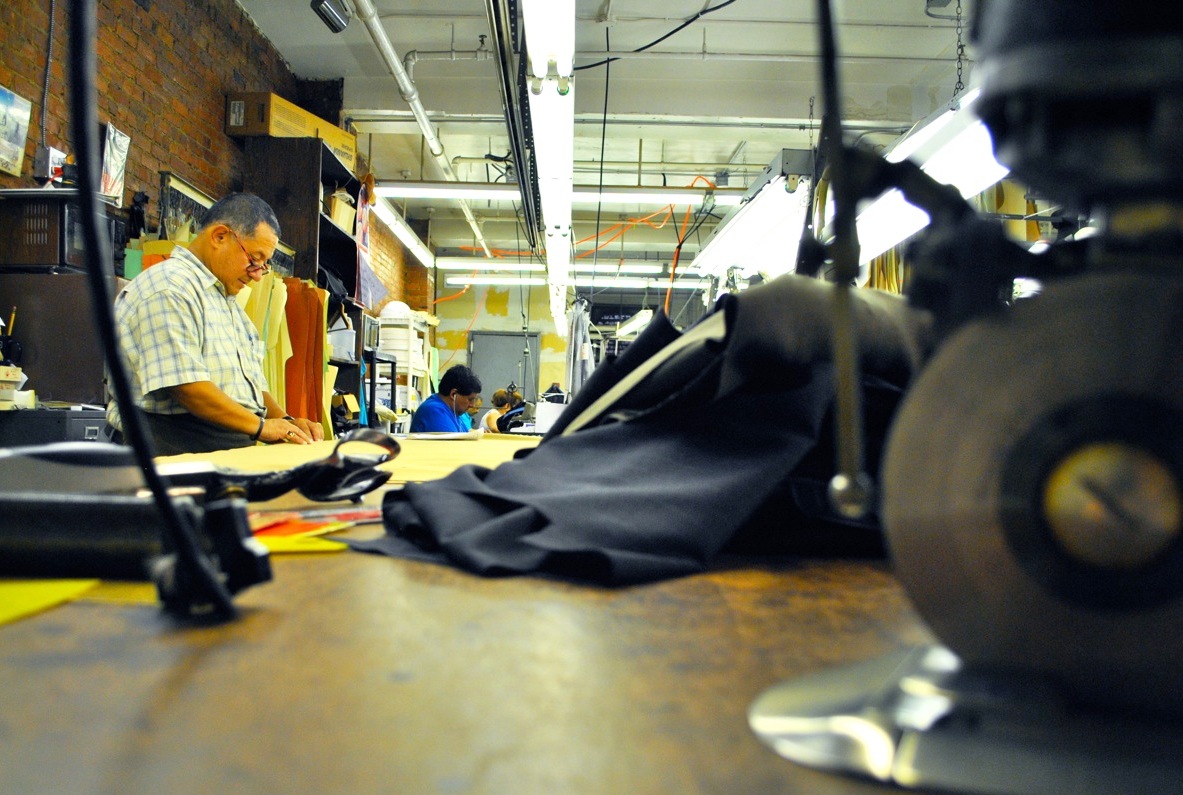 This guy asked me to make him look sexy. I did my best, dude.

As far as the typical customer experience, Mateosian usually completes a suit with three shop visits, and estimates the total process to take a little over 6 weeks. First, a Mr. Ned customer comes in to place the order. The customer is measured, and he and Mateosian discuss the purpose of the suit, the fit, and style details--as many as can be chosen, down to pockets and buttons. (Mateosian suggests that people who want unusual buttons visit Tender Buttons on E 62nd St.--”Terrible people, but great buttons. You can write that.”) After the (canvassed) chest of the jacket is made, the customer comes back for a fitting. No sleeves, just the chest, to make sure it’s sitting right. Other tailors, says Mateosian, add the sleeves before you have a fitting, but he says fit issues are more easily fixable when you fit with just the body of the jacket. At the third visit, the jacket will be complete, but no buttonholes cut and the trousers unfinished. Assuming it’s just a matter of marking those fixes, at that time the customer can schedule pickup or shipment. Most of his customers live locally, but some are guys who travel to NYC frequently for work. 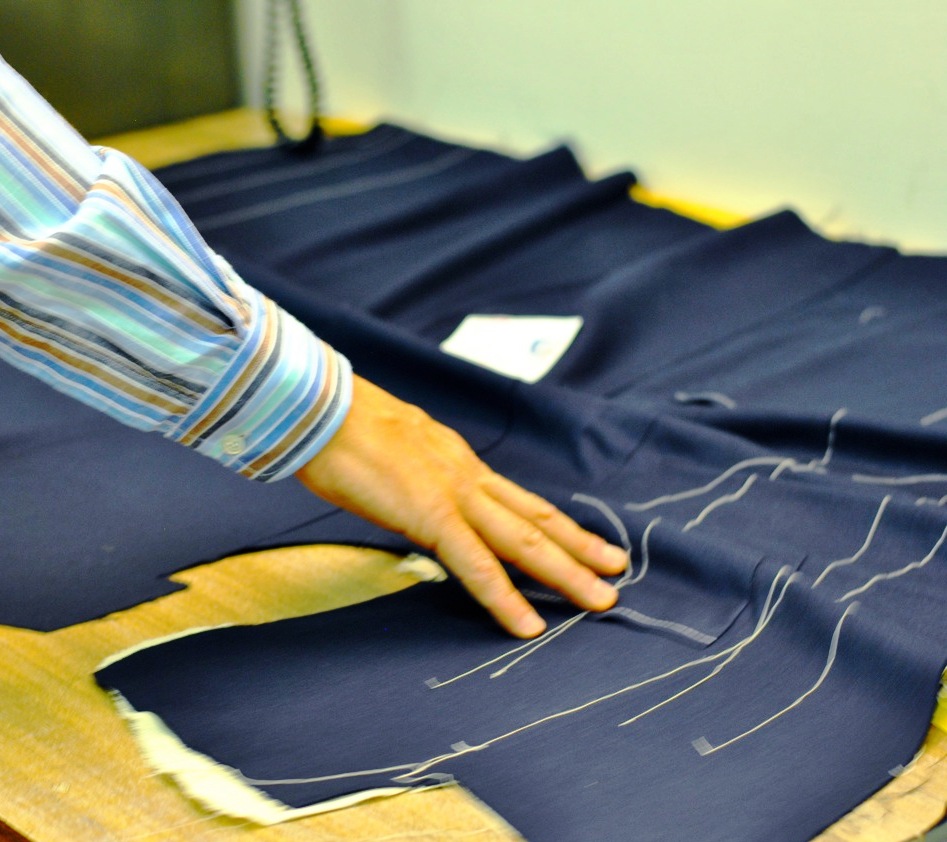 At the first fitting, the customer tries on only the body of the suit.

Regarding fabric, Mateosian says he keeps a variety of types and patterns in stock, but uses mostly the basics. “The biggest bolts of fabrics in here are what sells, and what sells is basic. Solids. Navy blue. Dark gray. Pinstripe... The rainbow tweeds and stuff, guys think they’re... a little swishy.” Mateosian believes he has a good selection to choose from, though, and his opinion is reflected in his “cut, make, trim” prices. Two-piece suits in in Mr. Ned’s stock fabrics start at $850, and Mateosian offers a $50 discount if you bring your own cloth. With cloth from other sources, says Mateosian, “You don’t know what you’re getting.” He doesn’t mind doing CMT but has set his prices to discourage it, because, he says, it can be harder to work with than the fabrics he chooses to keep in the shop. He stocks Hield Bros., Loro Piana, Vitale Barberis, and Holland & Sherry, among others. Mr. Ned charges a fee on top of the base cost for functional buttonholes, pick stitching, and certain other details. 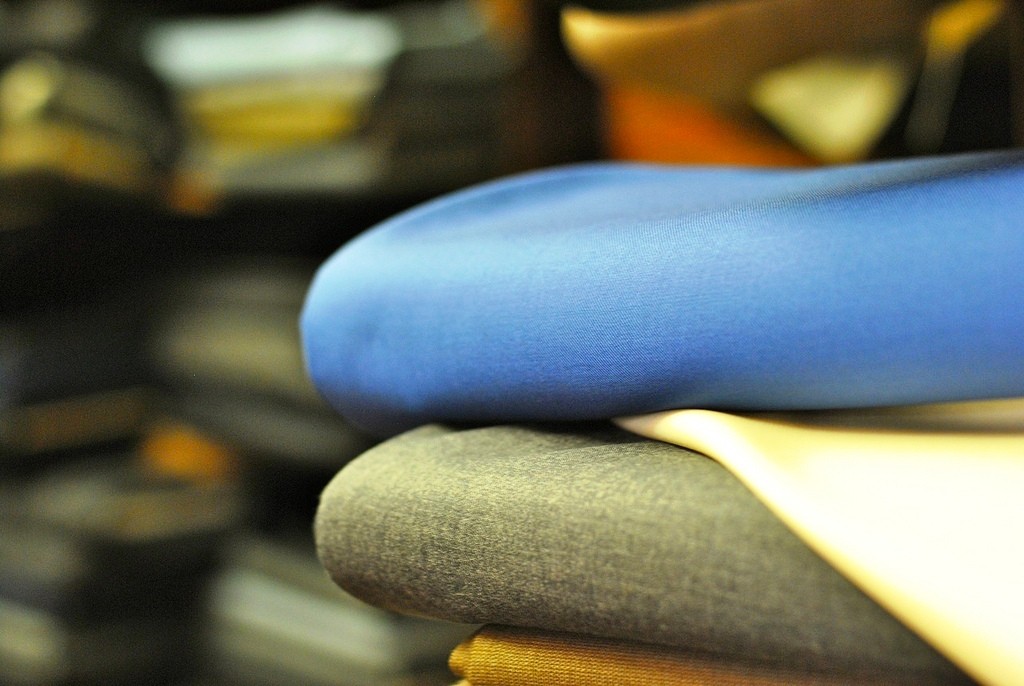 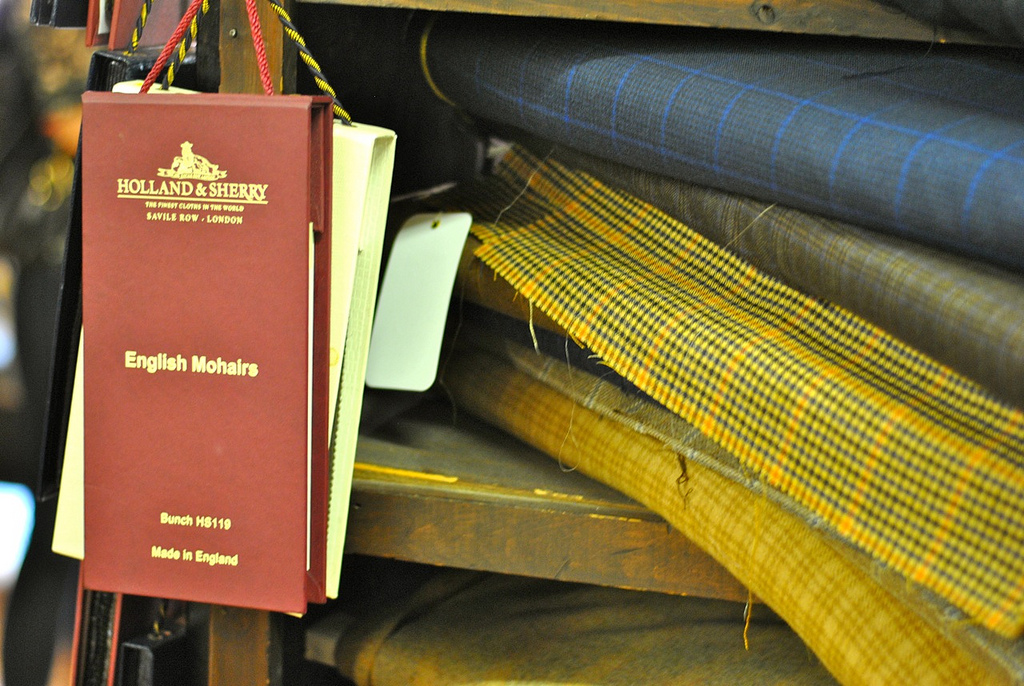 Mr. Ned doesn’t advertise, and in fact has no street-level signage. You’re not showing up in the shop, a few blocks south of the Flatiron Building, unless you’re looking for it. All his business is repeat or by word of mouth. Or from Styleforum. As we walked around the shop and thumbed through fabrics, Fok mentioned the indirect press Mr. Ned got when Wes Anderson used the tailor for his own suits and costumes for films like the Royal Tenenbaums (a favorite among the sartorially inclined). Mateosian said yes, he gets business from Anderson fans (and in fact a Tenenbaums poster hangs in the shop) but that he gets more referrals from the forum. His overall volume at this point is 40-60 suits per week, although this time of year, when it’s too hot to consider wearing a suit, he closes for two weeks. 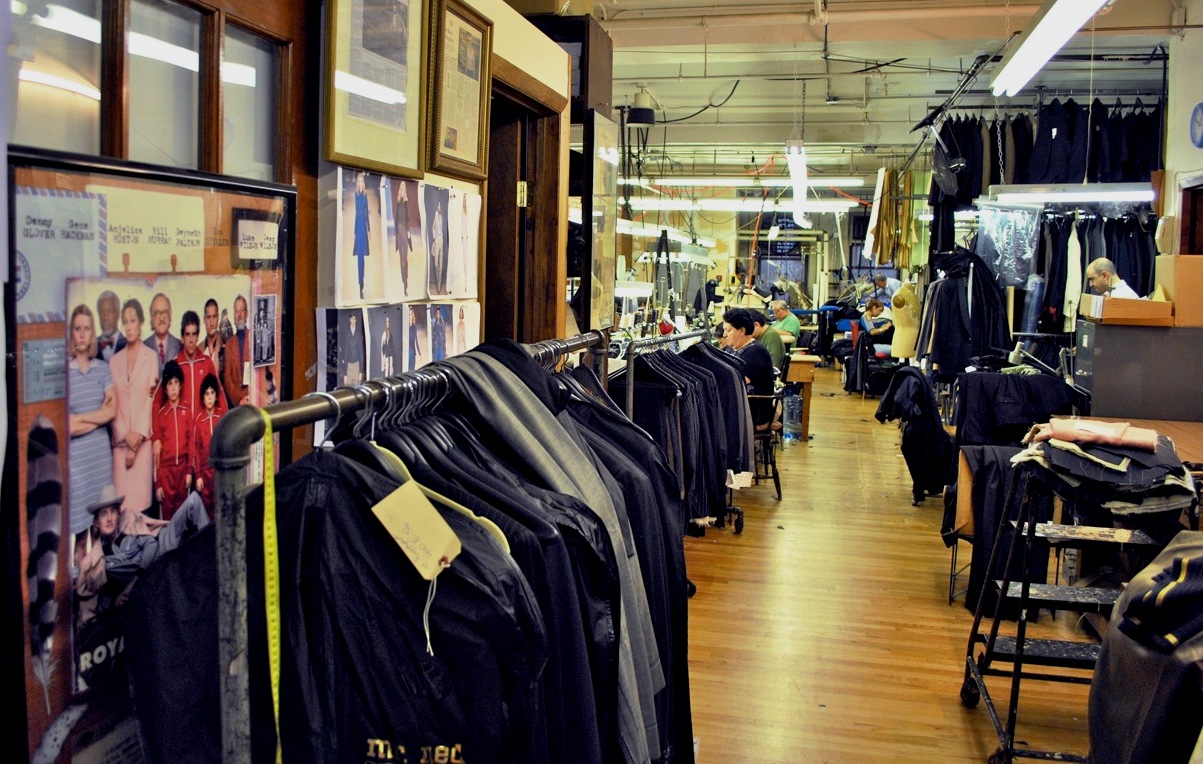 Mateosian does occasional alterations, but that’s not something he encourages. Sometimes when longtime customers are ordering new suits, they’ll also get suits altered, because they’ll mysteriously grow tight over time. He shrugs. “Measurements change. And that’s a one-way train going north!” 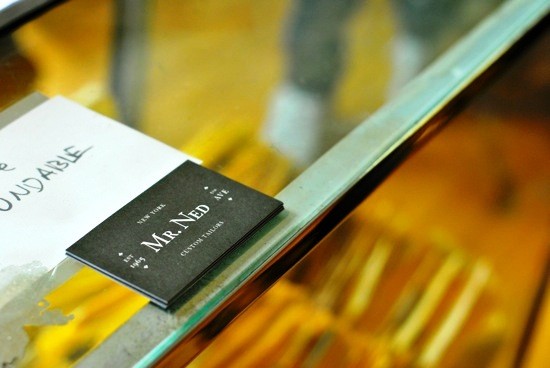