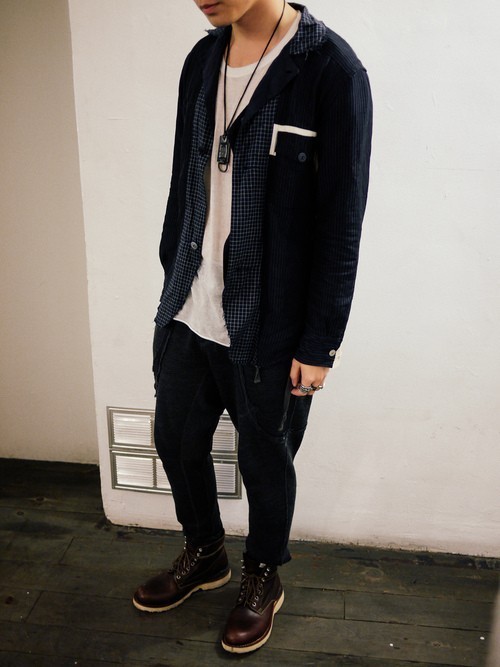 “A witch?” You’re not doing a very good job at keeping the disbelief out of your voice. The man across from you is, however, enthusiastic.

“Yes, that’s right,” he says, leaning over the desk across from you, “a witch.”

“Well, I don’t have any warts.” True, he doesn’t look particularly warty. He did, however, bring the broom with him, and has it lain across his lap. Being the new guy at the office means that you have to interview the weirdos, but claims of witchcraft are really an all-time low.

“OK,” you say, sighing, “tell me why you think you’re a good fit for Chromojen.”

“I am a good fit for Chromojen because fighting bad witches to guarantee a plentiful harvest and protect crops from evil would be a great asset for an agricultural engineering firm. In addition, my broom is made of sorghum, which is coeliac-friendly. This demonstrates that I am aware of the need for industrial progress as well as the reality of changing customer needs.”

“Good, good,” you say, scribbling on your pad: ethically minded, concerned with renewable sources. Really thinks he is a witch. “Wonderful. Tell me, what do you believe your greatest weakness is?”

Rick Owens, Visvim, the soloist – that’s quite blend of brands, but it’s working very well together. Do you see common threads between these designers? 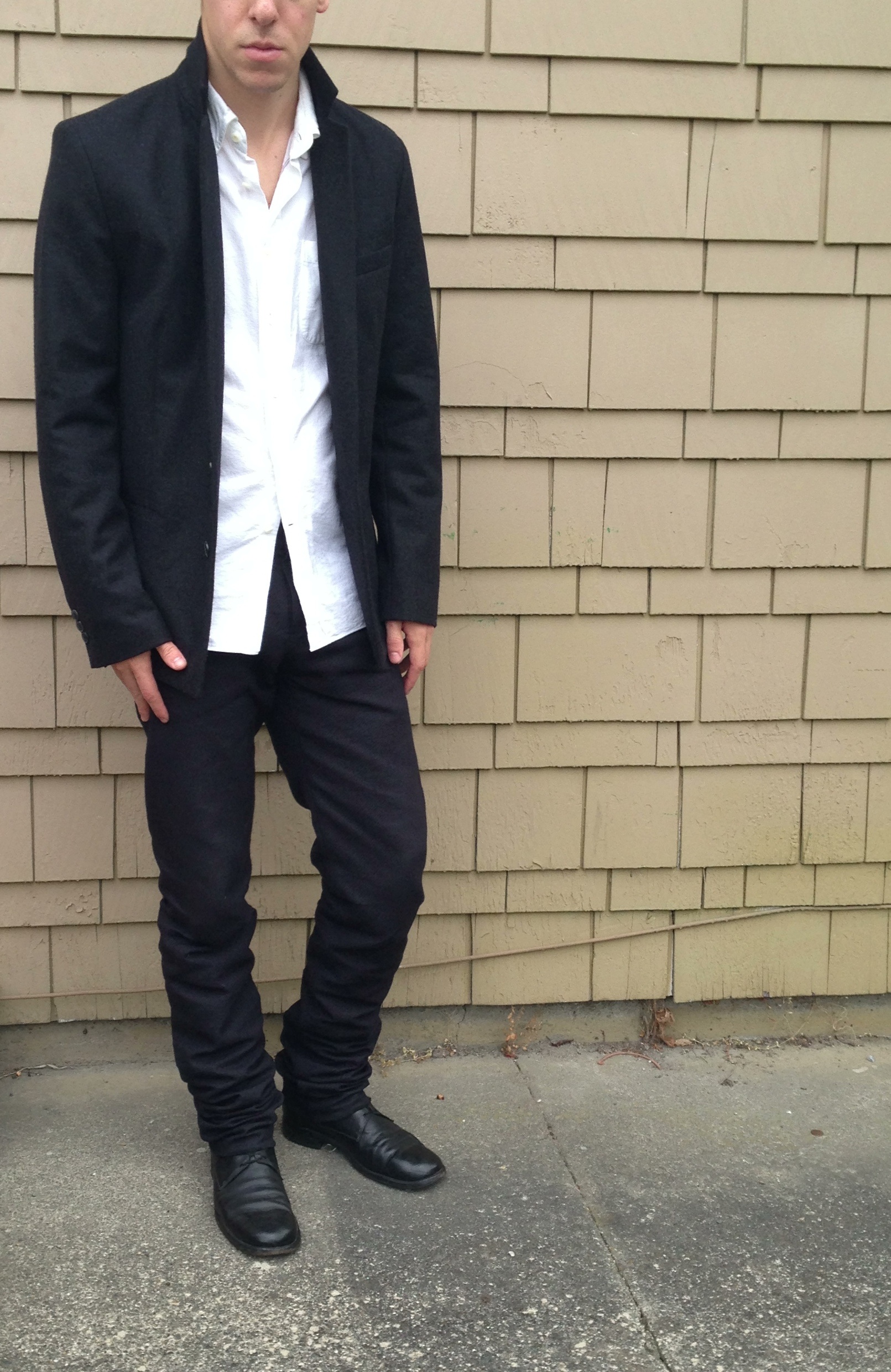 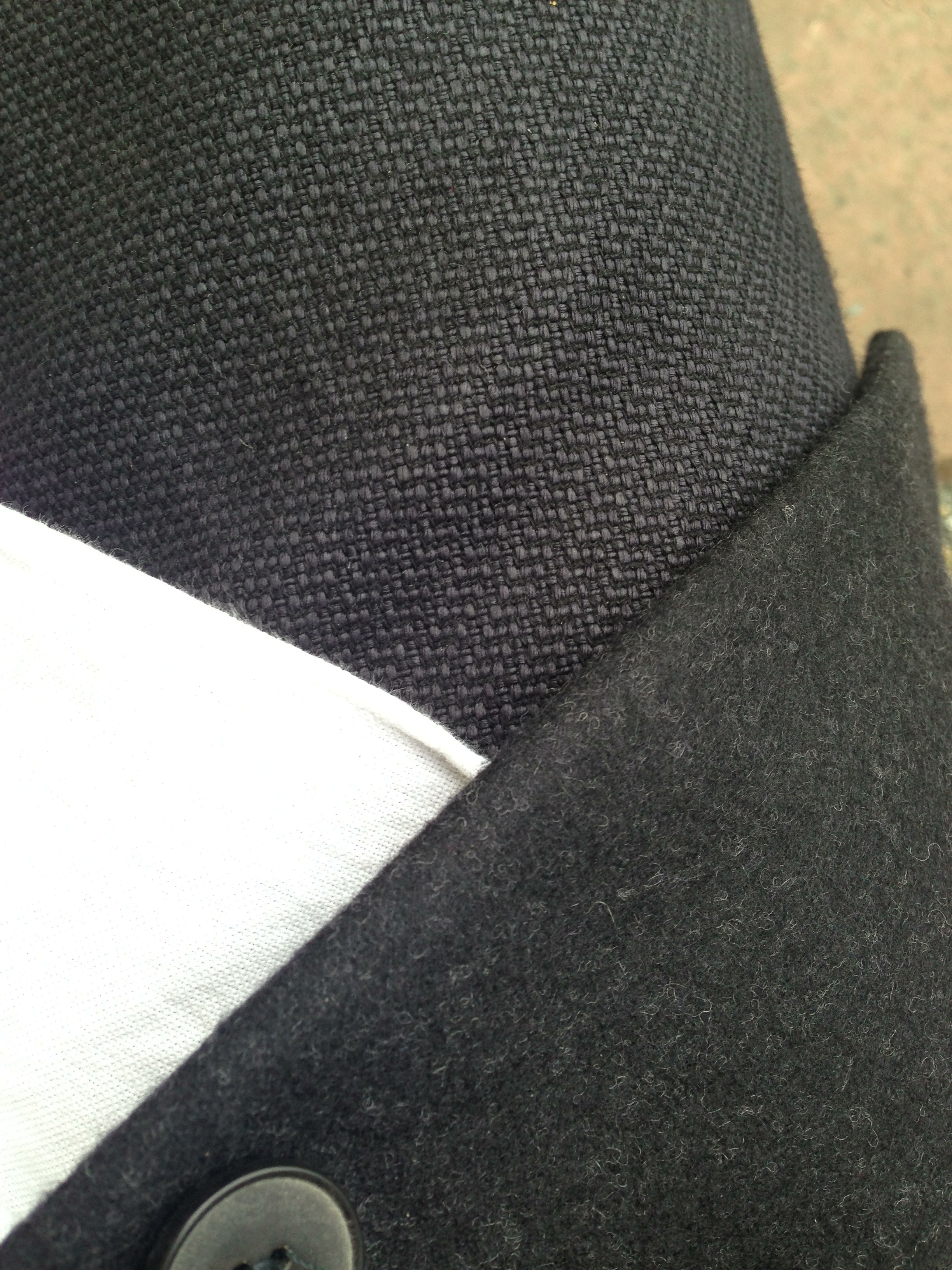 What this looks like: “Anything one person can imagine, other people can make real.”

“I dreamed of a place where humanity could cast off its shackles,” says the man atop the mechanical ostrich. “A dream doomed to failure, bound as we were – even here! – by petty squabbles and the shadow of past glories.”

The volcano roars and belches fire behind you. Waves crash against the rocky shore, and another tremor shakes the ground. The island is sinking.

The clockwork bird glints in the rubicund glow of the mountain’s wrath. It clacks and smokes and whirrs, steam pouring from the pipes along its side. You eye it nervously. There’s a loud bang, and the creature jerks backward several inches and jabbers maniacally, dumping its rider onto the sand.

“Dammit, bird!” he says, spitting out a mouthful of grit.

“You must live!” he shouts, struggling back into the ornate saddle and lurching unsteadily towards the water, “and tell the world what happened here!”

“Look, if you just forget about the ostrich...”

“Tell them of the wonders we built! Of the glory we took back from the sea!” He raises his arm in a deliberate salute, silhouetted in the smoke and ash, and takes a deep breath. “The time has come,” he intones, “for me to drown my-”

One of the ostrich’s metal legs buckles and the man is jolted sideways into the surf. He stands, spluttering, and a wave knocks him over, dragging him away.

I often start to feel a little funny when I’m wearing all black, but I also come from an obnoxiously sunny part of the world – which may or may not have anything to do with it. What role, if any, does climate play in the way you dress?

I grew up in upstate NY, and moved to Seattle for University. I've always lived in places that are obnoxiously cloudy, overcast, and rainy. And I love it. I've never really liked summer. I like grey weather.

All of this is probably a good part of why I like more muted tones in dressing: blacks, greys, and when I was first getting into clothing, muted earth tones. I don't like sunny, bright, flashy colors outside, and I don't like them on me.

Black specifically, also comes from the women in my family. They are almost all some sort of creative, and fitting the bill dress predominantly in black. They're Eileen Fisher people, but they actually make it look good. I think. So when I was growing up in middle-of-fucking-nowhere's-ville NY, the only people around me that qualified as well dressed were the women in my family. This means that whenever I think of a well-dressed person, it's someone in black and white, and I think that settled in my bones early, so when I finally did get into clothes that's how I wanted to dress.

So, to the question, muted tones are definitely from the climate- I never feel quite as comfortable, and do indeed branch out into navy during the summer, but I think that the blacks come from other places as well.

What this looks like: “Around the house prowled strangely docile lions and wolves...”

God, you have always hated yappy little dogs, and one sitting next to you in the cafe is the perfect embodiment of all your loathing. The man with it doesn't exactly match the image of the owner of a teacup poodle, but nevertheless he’s got one on his lap and is happily feeding it crumbs from his plate while it barks excitedly.

The man eyes you evilly.

“Did you hear that, Carrot?” he says, “another very rude man. Perhaps he needs training, too?”

“I’m trying to get some work done over here,” you say, “and your rat-thing is making it difficult.”

“Yes, you’re right” says the man in baby-speak, still talking to his dog, “I think we should teach him a lesson.”

“Listen, asshole. In about thirty seconds I’m going to call the cops and have them bust you for hygiene abuse or something. You better – ”

He points a finger at you, and you freeze. All of a sudden, the world looks very large, and you’re staring at the underside of your table. Did he hit you? The man leans over you, grinning and clutching a leash.

You open your mouth to protest, but all that comes out is a high-pitched yap.

SW&D definitely has a thing for black leather jackets. Why’d you choose to buy yourself one?

I wish I could give a better answer than “I wanted to look cool,” but that is essentially what it boils down to. I do think a black leather jacket does have a certain romanticism about it, image of youth rebellion and all that, but at the end of the day I’m neither a biker nor a punk and all of those things are pretty far removed from me. The beauty of a black leather jacket to me is that it’s dead simple to haphazardly throw on over something like a tee and jeans. It’s honestly one of my favorite pieces for that reason and the piece I find myself reaching for most often. I’ve made a fair number of mistakes and silly purchases over the last few years, and that simplicity is something I’ve really come to appreciate in clothing, and TOJ in particular. 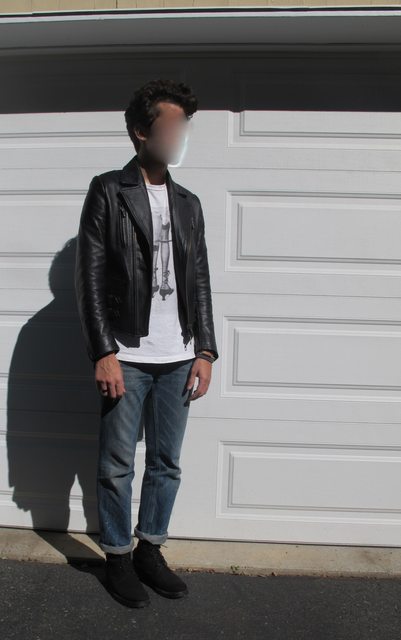 What this looks like: “Tell everyone that when the day is out, we shall have a wedding. Or a hanging. Either way, we’re gonna have a lot of fun, huh?”

“Well, this is a disaster,” says your friend, slouching forward on the park bench. He sighs, as though it’s somehow surprising.

“Of course it is,” you say, taking a sip from the bottle of wine the two of you are sharing, “which part seemed like a good idea?”

“I just thought, you know, ‘where did the romance go?’”

“Right, but it’s not romantic if you lodge an arrow in her shoulder.”

“I was aiming for the door-frame,” he says.

“Why would she? We’ve known each other since childhood.”

“Because you shot her with an arrow.”

“It was a love confession - there was a note attached to it with ribbons and everything! You know she’s always been obsessed with Robin Hood!”

“Jesus, then just dress up or something. You could have killed her!”

“Not good enough. She’s a nationally-ranked archer, I know she appreciated it. Those archery lessons were totally worth it.”

“Except they didn’t work, you lunatic.”

There’s a whistling noise in the air above you, and a dark shape tears out of the sky and buries itself in your friend’s thigh. You drop the bottle. He blinks slowly, staring at the blood-red fletching on the arrow’s shaft.

“She loves me!” he says, and passes out.

Nice hair. I mean, uh, I like how you’ve got some sort of updated rockabilly look going on here. Is that what you were aiming for, or am I way off base?

For sure. Music has made a large impression on the way I dress, and this fit in particular is a clear example of that. When I was younger I was fascinated with punk culture, and a double rider jacket had always been a piece of clothing I coveted, long before I was into fashion. This TOJ 2010 is great, but I think this fit would be improved by say, a Schott perfecto. I'd love to get one in the future, and be able to swap the two out. There isn't a great difference between them, but the nuances can have significant effect on the overall fit. I've also been in the process of growing my hair out, but I might just keep it this length, it works well with most of what I wear.

As well as having significant social history behind them, double riders just look plain badass. They give off a vibe that no other piece of clothing, leather or otherwise, can replicate. A double rider always looks best in a simple outfit. A tee/sweater/shirt, jeans, and boots. No frills or bullshit, just let the jacket do its thing.
INSTAGRAM

You got the month wrong in the title but solid as always.

What can I say? I excel at all things Internet.
INSTAGRAM


SpooPoker:That is one badass Jew. DerekS:Jew Wayne. dcg:You are like Skynet in Joo form. You are like a Godzilla who kops instead of destroys. HORNS:Stitch died for our sins. edmorel: in stitches is reading this and is like "holy crap, I thought I posted useless shit on the forum!" nahneun:in stitches has been possessed by kanye. help us g-d. artishard116:GOTH-RABBI. Claghorn:Stitchy is right.
sugarbutch:Stitchy only competes when he can devote 150% to crushing all you weak bishes.​

the story accompanying magicalporks' is legit terrifying.
Buying From Japan – The ultimate beginner’s guide to buying Japanese fashion on the web

Gave me a good laugh.

That's some Goosebumps shit right there.

cowsareforeating said:
peopel like to talk about wabi sabi and dont wabi the sabi you know what im sayzin
Click to expand...

I'm glad to see that the mechanical ostrich made an appearance, and I'm always in favor of the use of the word 'rubicund'.