Would you wear sneakers with tailoring? 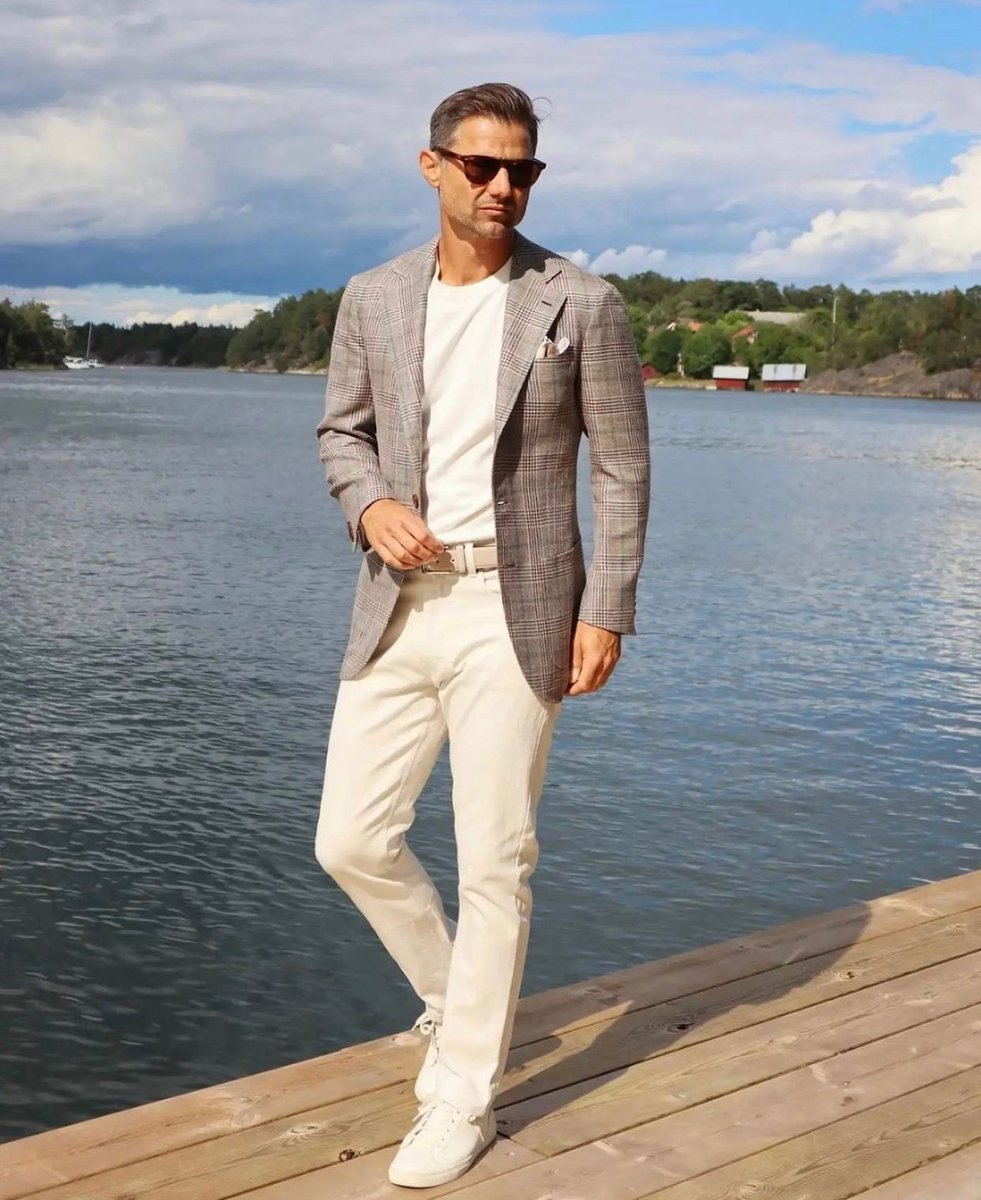 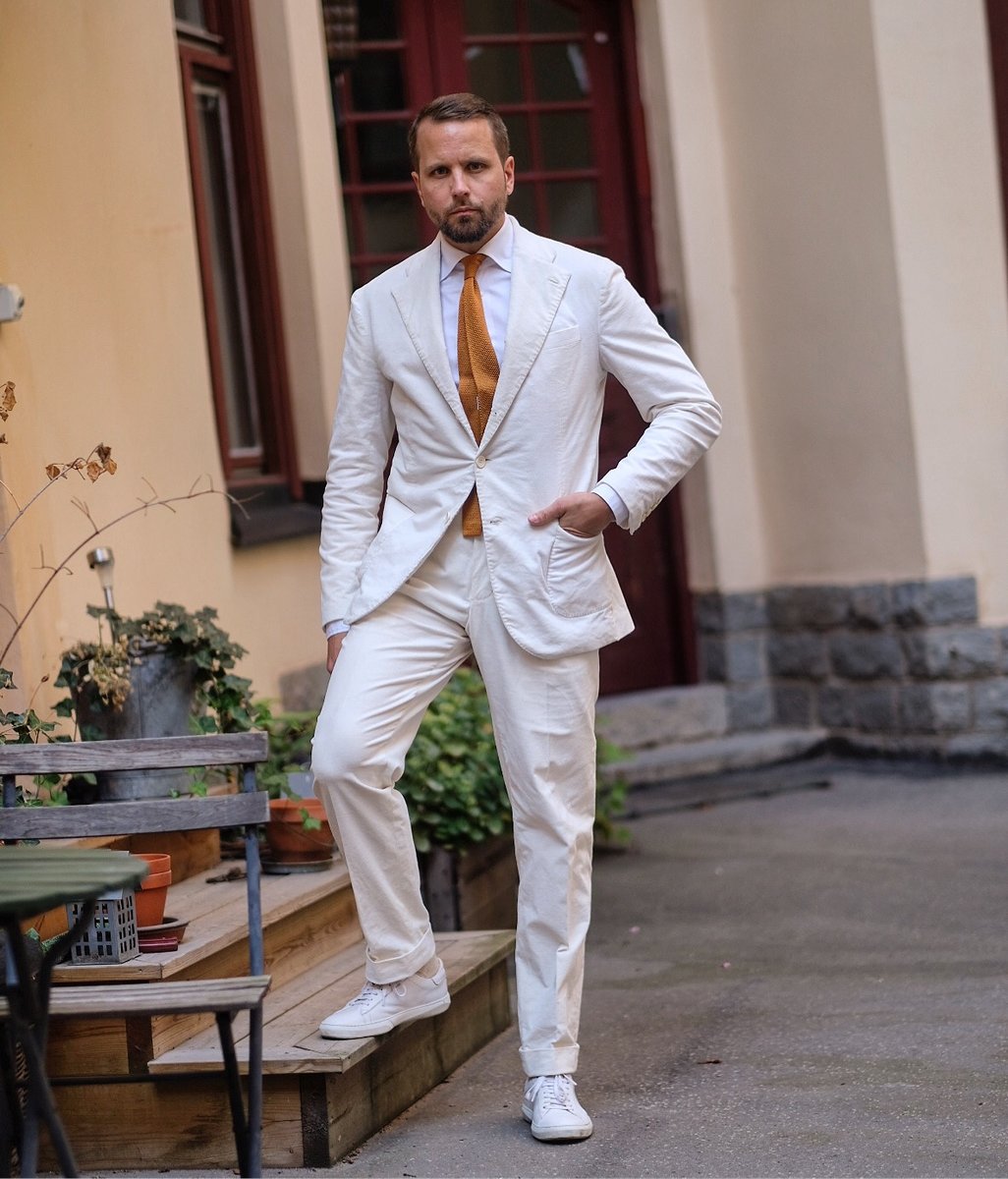 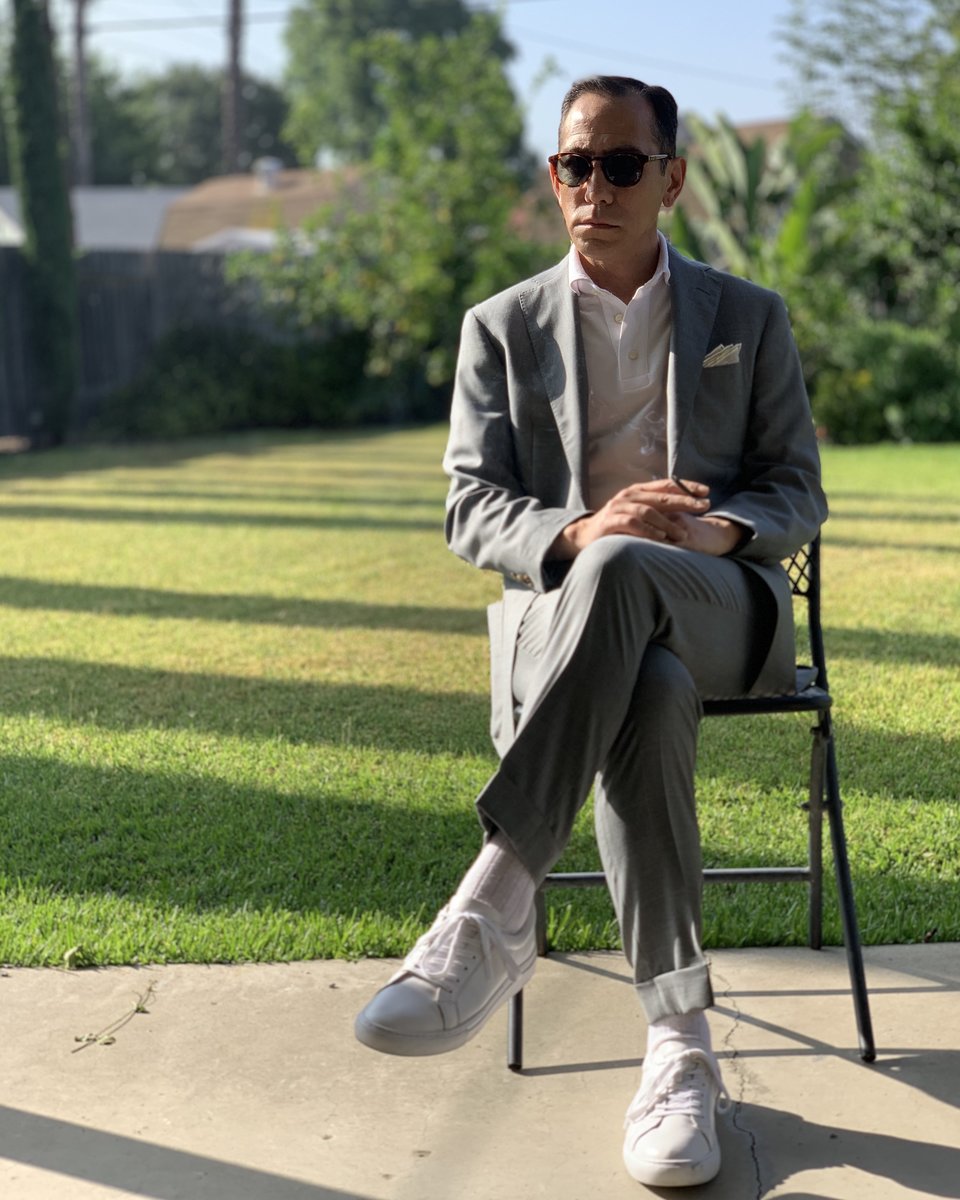 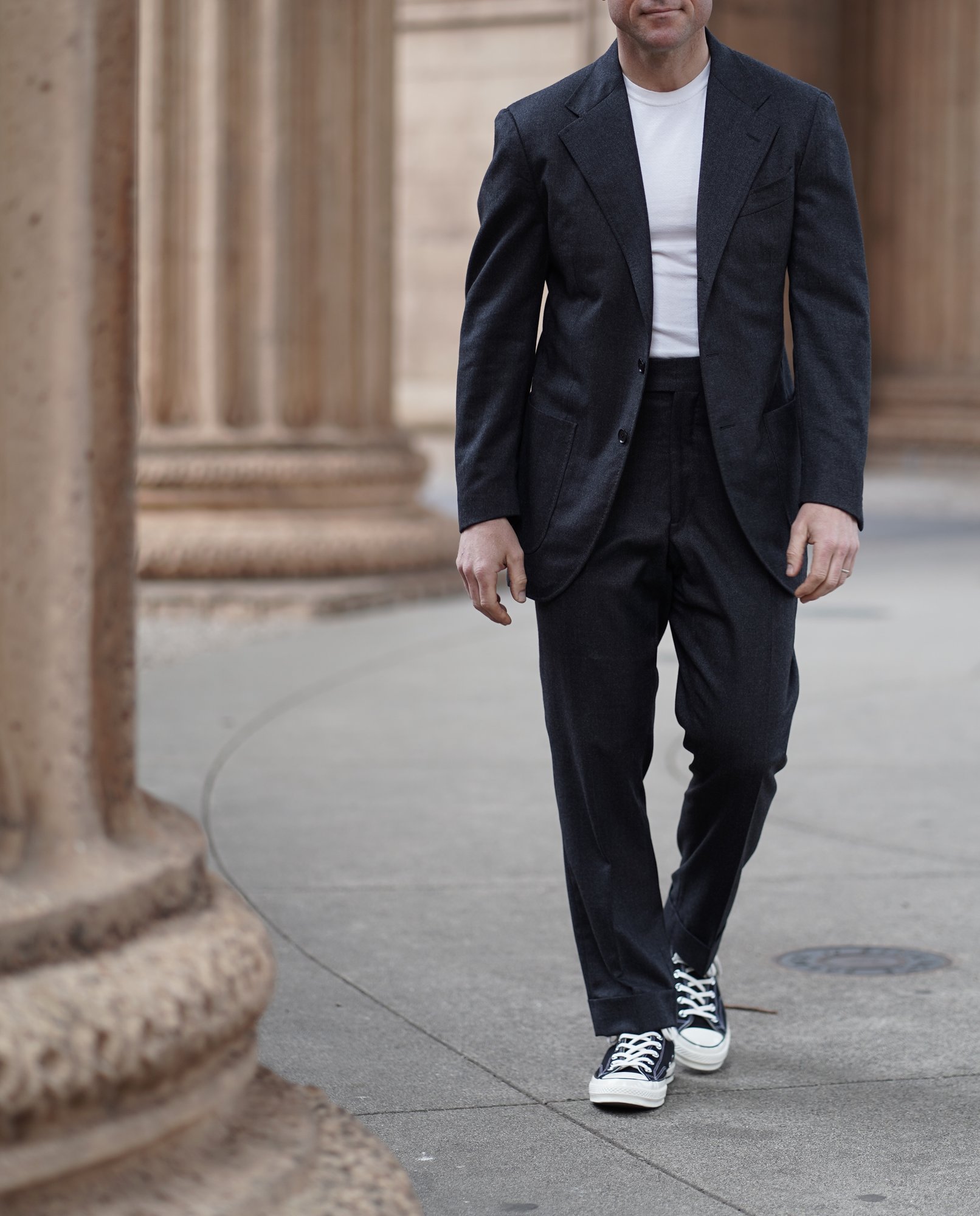 Absolutely. I’m a big fan of sneakers with sport coats.

If it's not a suit, I'd imagine that some form of trainers can work with some tailored clothing.


ArchibaldLondon said:
.... we would like to create a sneaker made in complete collaboration with the community, which we will sell to the community at cost. We estimate that would be $128 dollars, for a hand-cut, handmade Italian leather sneaker (to clarify: our sneakers use hand cut leather, they are mounted by hand, and stitched by a hand-operated machine). ....
Click to expand...

I know I'm in the minority. I don't like it. I think it can be done tastefully, and some men look good going it, I just don't like it.

If I were to do that outfit again, I’d wear Vans slipons.
Instagram

UrbanComposition said:
If I were to do that outfit again, I’d wear Vans slipons.
Click to expand...

Are those Todd Snyder Chucks?
I have a pair...

It works with casual suits (linen, cotton). Not a fan, at all, of those new fancy sneakers though. For me it has to be canvas. I like Superega best because they are fairly sleek. Vans and Keds have too high soleguard. Makes them look chunky and less elegant, imho.
The look do become very casual. Much more so than with a sport coat, trousers and loafers. The shoe choice does have a very strong influence on the total level of formality.
Try to be interested, not interesting.

Brand new here, but not a fan of sneakers or the dress shoe with sneaker bottom

so much is made here of coherence and I cannot think of anything more inchorent than what’s pictured above.

The third gentleman down may as well be telling the world “I’m old and I can’t wear regular shoes because my bunions hurt.”

I think this is a very aspirational look. Those of us with trained eyes know this looks much better than more traditional ugly oxfords. Dressing like this lets the world know that you are not new to wearing clothing. 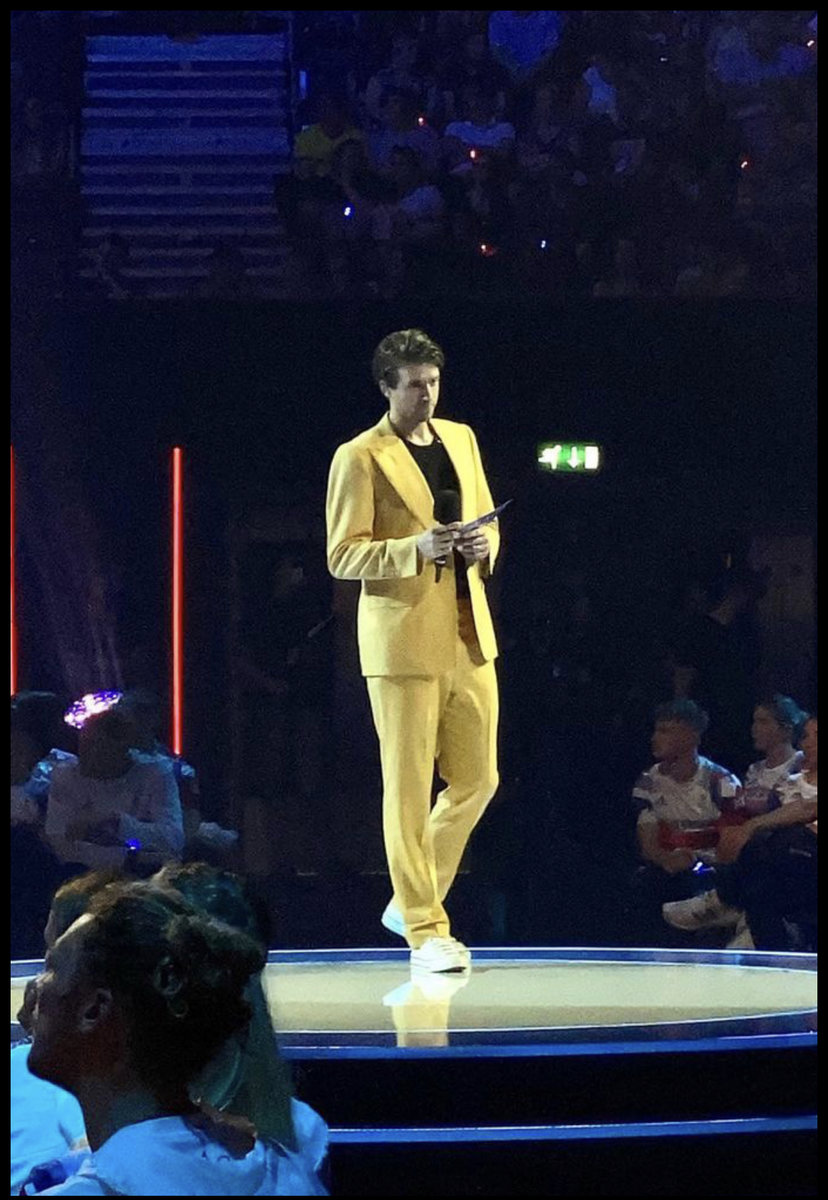 michaelvl said:
I can't stand the look, especially on men 30+.
Click to expand...

I think the look is good if you are a 28 year old petite male in an urban social or very laid back work environment.

maybe not so good for a 62 year old with a larger frame in a business environment where projecting a different type of image is needed.
Last edited: Sep 22, 2021

I'm gonna say maybe this time. The common projects look-alike have honestly been spammed so much online, often with tailoring, and I can't bear seeing them again; but I'm not sure at this point whether it's because I don't like the look or because it's greatly overdone. Though personally I think off-white and/or suede might work better than pure white, which is often too bright and too stark a contrast for my taste. It's incredible how much it attracts the eye, and then if you wear tailoring on top it seems like it's intentionally flaunting the formality contrast rather than harmonizing and fading out into the outfit as a whole.
Recently I've been appreciating Japanese canvas sneakers more after seeing Crompton or the guys from the Armoury wear them a lot. Probably wouldn't wear them with a suit though, but maybe with odd jackets; actually, not at all because there's no option to buy them here (EU) that isn't outrageously expensive (no, I am not going to buy them at double the japanese domestic price, thank you very much. I'll just buy a pair of leather loafers at that point). Haven't found a pair of the local alternative (Superga) that I like, most have invasive branding, and stubby shapes too. Maybe some low-top retro Converse.
You must log in or register to reply here.
Share:
Facebook Twitter Reddit Pinterest Tumblr WhatsApp Email Link
New posts