A few years ago I wrote a post about canvas suit construction which some of you may remember. As a continuation of the featured articles on Style Forum I thought I would update and condense some of the information to reflect current trends in manufacturing, and also to bring the information to newer members who may not have seen it.

The illustrations below show where fusible, if any, is applied for the different techniques, as well as where and how canvas is used. In-depth exploration of the various layers hidden beneath the chest felt can be found all over my blog.

First, a word about canvas.

Canvas is typically a blend of wool, often cotton, and animal hair, mainly horse and camel hair. The principal characteristics of the wool and animal hair are that they can be molded using humidity, pressure and heat, and the fibers will retain a shape; think of how a woman uses a hot curling iron to shape her hair. Horse and camel hair have the additional benefits of being lightweight but very resilient- hair from the mane is softer while hair from the tail is quite stiff and wiry. Different types of fiber will be woven in combination with the wool and or cotton to produce various grades of canvas and haircloth which are used in combination to build the foundational structure of a coat.

In the photo below, from left to right, are haircloth, which has a lot of roll due to the horse tail strands, wrapped hair cloth which is softer and less expensive than haircloth, wool canvas, and the black item is fusible. 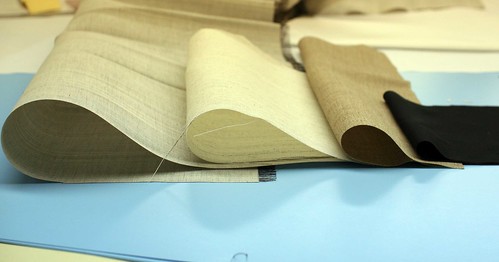 The wool canvas forms that main foundational layer of the coat, then smaller pieces of haircloth or wrapped hair are used to build structure to the chest and shoulder, and these are covered by a piece of felt, domette or flannel to prevent the hair, which is wiry, from scratching the wearer. Sometimes the horse hair will poke through the layers, sometimes protruding out of the garment; this is an annoyance more than anything and can either be snipped away or pulled through. 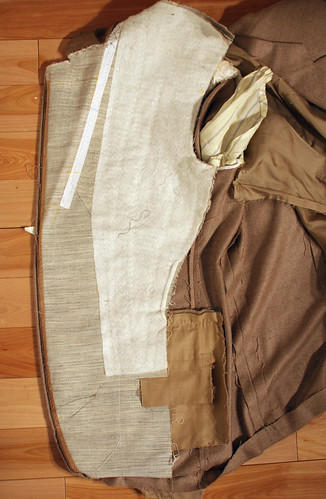 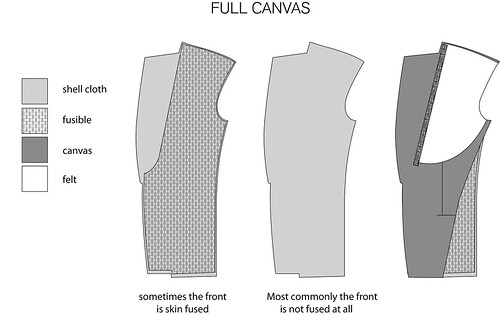 A garment which has a canvas structure running all the way from the top of the shoulder to the hem is known as a “full canvas garment”. It is very easy to determine whether a coat is fully-canvassed- take hold of the lower front of the coat and peel the two layers of wool (the front and the facing) apart- if you can feel a third layer floating between the two, that is the canvas. There were instructions floating around for a pinch test in which you pinch the chest and pinch the sleeve, but for reasons which you will soon see, this is not a reliable indicator.

Fashion has skewed toward lighter, finer, and more delicate cloth weights (a trend that I see starting to reverse itself) and these fine cloths can be very difficult to handle in construction, and be very sensitive to humidity. The Japanese, whose weather drove the march toward lighter cloths but whose humidity was detrimental to those cloths, were champions of a fairly recent technique of “skin fusing” the front- a lightweight fusible would be applied to the front part of the coat to give it stability when basting the canvas to the front, and to help prevent puckering from humidity. Some western manufacturers have adopted the technique for problem cloths so it is entirely possible to come across a front which has soft fusible on it, despite it being also fully-canvassed. More on fusibles shortly.

Notice that the canvas covers the front, including the lapel- the canvas will be rolled and padstitched in the lapel, which gives a certain amount of bloom or roll to it, which can be seen in better garments. 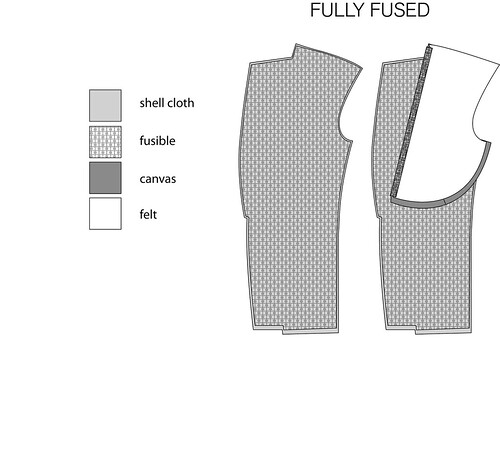 And now a word about fusibles.

Fusible interlinings have come a very long way over the last 40 years. A German company developed the technology whereas an interlining would have a special resin applied to it which, when heated, would melt, and if another piece of cloth was pressed very firmly against it while the resin was soft, a bond was formed and the interlining was fused (or glued) to the cloth. The early days were horrific because the resin which bonded the interlining to the front failed often, causing delamination, or that infamous “bubbling” along the front. The technology has advanced greatly and these days, delamination is very rare (which is why it’s not considered a problem to skin-fuse a full canvas garment). It can still occur, however, if the garment is improperly handled. Once the interlining has been bonded in a special machine, care is taken to make sure that the area is never heated without simultaneously applying pressure; during construction irons and presses are used, but there is always pressure accompanying the heat. If we want to remove the interlining, however (because of a faulty application, for example), we apply a bit of steam which softens the resin’s bond, and makes it easy to peel the interlining away. Any time you subject your garment to steam without pressure you soften the bond, creating a risk of delamination, which is one of the reasons I warn people never to steam tailored clothing (there are others).

Fusible interlining (a much heavier version than the skin-fuse variety) replaces the main canvas portion of the understructure of the garment, then a chest piece made of canvas, haircloth and felt is affixed along the roll line of the lapel, and tacked into the armhole but is otherwise left floating (thus the moniker “floating chest piece”). This is a quick, easy, and inexpensive way to stabilize the front and requires no skill on the part of the operator.

PROS-quick, easy, inexpensive
CONS- stiffens the cloth slightly, does not provide the same type of support that animal hair does
No canvas in the lapel so the lapel is somewhat flat and lifeless
Slight risk of delamination 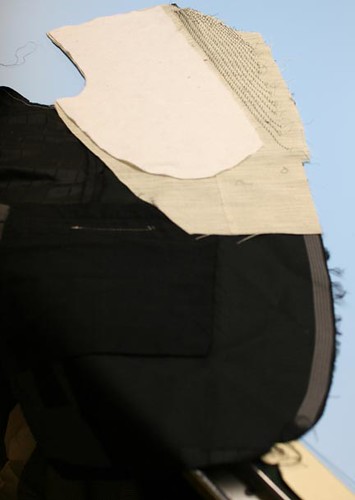 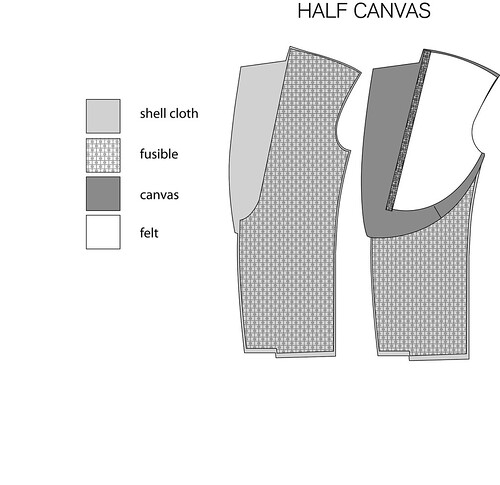 Half-canvas garments are becoming more and more common as they combine advantage of both methods- a cost-saving in terms of material and labor for the application, reduced risk of distortions on the lower fronts, but the benefits of canvas in the chest and lapel, where they are needed the most. The front is fused (something, whether canvas or fusible is required to stabilize the fronts), but the fusing does not extend into the lapel area. It used to be common for the canvas to extend below the pocket, or at least to the second button, but most manufacturers now only extend it to the first button. Since there is no canvas in the lower portion, you can’t use the pinch test to determine whether a garment is half-canvas or not. When canvases were heavier you could feel down the front of the coat and sometimes tell where the canvas ended but many are using softer, lighter canvas now which is harder to detect. On finer wools you could look for dimples under the lapel which would suggest pad-stitching, but this will be invisible on more robust cloth. In fact, the only way to know for sure is to ask a well-informed salesperson (not all salespersons are well-informed). (There are variants on the half-canvas method but for simplicity I will consider them all the same)

While purists will insist that only full canvas garments should ever be considered, there is a significant cost involved and so it is a little disingenuous to insist, particularly to newbs, that fused or half-canvas garments should be avoided outright. Someone who is just starting out his career will likely not have the means for full canvas, nor is he likely to be familiar enough with suiting in general to risk purchasing something off the internet in order to get a good deal. Half-canvas is a more affordable alternative, and if he is really on a budget, a fused garment makes an inexpensive first step; considering how our tastes and preferences evolve once we have been wearing and trying on suits for a while, it is perhaps wise to start off with a less expensive purchase and work up to the better makes once we have a better fix on our tastes and what fits and suits us.

This thread will contain information about construction technique but should not reference any particular brands. If you have questions about specific brands please address them in a different thread.

Thank you.
Last edited: Oct 13, 2011
I`ve moved my blog out of my parents` basement and got my own place! And I promise I will be writing more from now on...

Thanks SF (a new me)


"Don't be a ***** about it. You are an ass for demanding shell while paying only for calf." (onix/April 2012)
"If you are overdress, you feel ridiculous. If you are under dress, you are ridiculous" (read it from somewhere...)

Very helpful. Thanks for posting.

What would you say of jackets that have a very nice lapel roll, but are know to use fusible? Could the argument be that this is a cheaper alternative to a fully canvassed garment which seemingly retains the earmark of a fully canvassed one base on the appearance of the lapel (roll)? I believe I read somewhere that this is known as a padded lapel or something. Amirite?

Best pic I could find ATM: Very informative...thanks so much for taking the time to share this information.

Great post, and more understandable than anything else I've seen. Thank you!

A padded lapel refers to the fact that there is a separate layer of canvas which has been gradually rolled while stitching the canvas layer to the cloth, giving this result 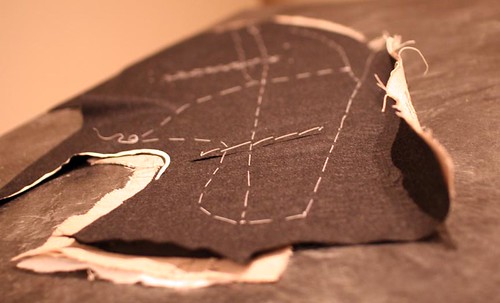 A flat-fused lapel will roll a little bit, but never as much as a padded canvas lapel- compare the limp, black stuff in the photo above (fusible) to the canvas next to it.
Last edited: Oct 7, 2011
I`ve moved my blog out of my parents` basement and got my own place! And I promise I will be writing more from now on...

Great post, thanks. I especially appeciate the fact that you have written it from a neutral perspective acknowledging that there are pro and cons to the different methods.

Thank you J.
As our island of knowledge grows, so does the shore of our ignorance. – John Wheeler, physicist

I recently had my tailor make me a completely unlined and unstructured jacket, in a thick heavy wool, that honestly appears to have just as much shape as a fully-canvassed jacket I also have. Is it possible that with darts and enough ironwork, a tailor can add just as much shape to a heavy unstructured fabric than a thin fabric with canvassing?

Very interesting. I always found "half canvas" construction confusing, precisely because, as you mentioned, it is so difficult to identify without taking the jacket apart. What are some current makers of half canvas jackets?

NORE said:
Thanks JD.
What would you say of jackets that have a very nice lapel roll, but are know to use fusible? Could the argument be that this is a cheaper alternative to a fully canvassed garment which seemingly retains the earmark of a fully canvassed one base on the appearance of the lapel (roll)? I believe I read somewhere that this is known as a padded lapel or something. Amirite?
Best pic I could find ATM:

I believe the lapel/chest still have canvas
Last edited by a moderator: Oct 13, 2011