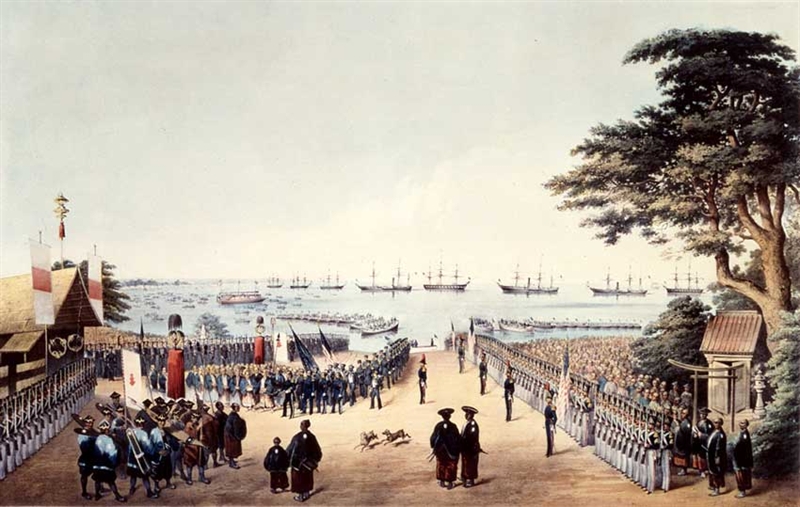 In 1853, Commodore Matthew Perry showed up in Tokyo (then called Edo) with four warships and a message from the United States: open your borders to trade or we’ll blow your house down. Japan’s leaders saw that they were outgunned. They had no other choice than to accept U.S. demands. Like many island nations, Japan has a tendency to close in on itself, like the family with the house in the woods that never comes into town. Meetings with the outside world then become dangerous and challenging, but at the same time alive with novelty and inspiration.

In the hundred years following Commodore Perry’s arrival, Japan adopted some Western practices (a Prussia-inspired constitution, a few European-style ballroom galas, complete with tailcoats) only to then follow the Axis powers into developing its own brand of racially-charged fascism. After Japan's defeat in World War II, the Americans returned, this time lead by General Douglas MacArthur, on what he thought was a divine mission to pacify and democratize Japan, one of the only countries the West never colonized. American clothing styles of the ‘50s quickly spread through Japan, where they were preserved in amber while Americans went through the sartorial horrors of the Bee Gees and Bon Jovi. By the time the United States looked up, Japanese firms were reproducing iconic American designs like blue jeans and military gear. The landmark 1965 book Take Ivy, celebrating the style of American Ivy League universities, was written by three Japanese men, using the photographs of another.

And yet all this wardrobe-stealing shouldn’t be viewed as veneration for America. A recent poll found that only 25% of Japanese see Americans as “hardworking.” Only 37% think Americans are “honest.” According to W. David Marx, author of the upcoming Ametora: How Japan Saved American Style (Basic Books, Fall 2015), “consumer goods become detached from their national origin in the process of importation and placement within a new consumer market, so you can simultaneously hate Americans and wear jeans, because you bought those jeans in Japan and are wearing them in imitation of other Japanese.” Perhaps delusion with American culture is part of what drives the surging Japanese interest in Italian clothing. Italy presents no political or military threat, and imposes no sense of inferiority on its Japanese admirer.

Italy’s historical experience has been the opposite of Japan’s. Its natural borders offer little protection. The Boot is a foot dangling in a whirlpool of geopolitics, swept this way and that by the strongmen of each era. Most regions of Italy have therefore been ruled by many different conquerors. But each successive occupying army finds themselves absorbed into the Italian milieu. They arrive with designs on imposing their will, and end up submitting to the higher power of the Italian genius for living. The Italian spirit, like that of India, has built up a sort of immunity to foreign invasion. Italy’s culture is like pizza dough - you can try to break it up, but it just reconstitutes itself in a new shape, and now it’s all over you. Japan’s is more like an oyster - usually closed to the outside world, but occasionally some grain of sand works its way into the oyster’s shell and, swirled and scratched by Japanese perfectionism, becomes a pearl.

Perhaps we are seeing the beginning of that process at work with Italian style today. Yasuto Kamoshita, the man who first started buying Neapolitan jackets to sell in Japan at United Arrows, says that “[n]ow there are young Japanese people coming to Italy to try to learn how to make a Neapolitan jacket.” The Japanese magazine Leon covers Italian menswear exclusively. According to Takahiro Osaki, who now works in Florence for the Liverano and Liverano Atelier, the person drawn to Italian tailoring is someone who likes “elegance and distinctiveness.” Likewise, Kenji Kaga of Tie Your Tie, a neckwear firm founded in Florence but now Japanese-owned, says that the Japanese view Italy as a country with a “very high level of fashion.”

This interest in Italian style and elegance comes at a time when Japanese society as a whole is changing. The old system of “company men” in dark suits plugging away at one firm for their entire careers before drifting off to their pension is beginning to show cracks. “Compared to the ‘80s, now is a completely different time, not just in how we dress but how we live, how we get news of the rest of the world” says Mr. Osaki. “This means changing our style of dress - using more color, different styles. We are more open in our mentality compared to before, and we have had more diverse experiences.” 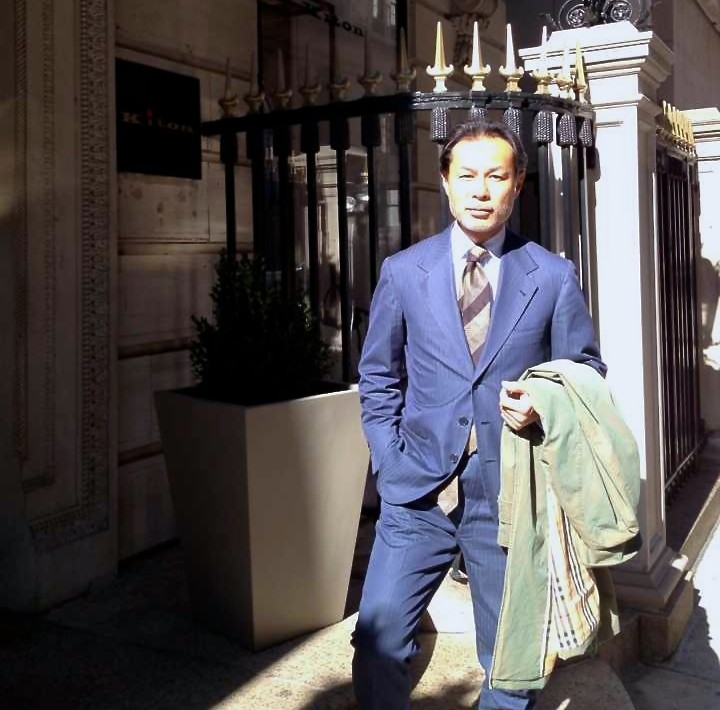 Mr. Kaga of Tie your Tie

In their renditions of American clothing, Japanese clothing producers are well known for their exacting detail in faithfulness to original models. David Marx attributes this in part to “an "original perfect form" (the kata) that early learners should imitate. I think when Western ideas come in there's a pretty natural reverence for the forms of those ideas and the obvious thing to a Japanese person is to follow it for the time being.”

At Pitti Uomo fairs these days, the Japanese attendees are generally the best dressed. Maybe because they burn with the fervor of the new convert. Maybe because of their quest for the kata, the perfect pearl. Maybe just because they have to travel the farthest, so only the most dedicated and determined make the trip. Regardless, they stand out by their careful rendering of Italian style.

And in that, perhaps they make it more Japanese and less Italian. American Ivy, according to Marx, “was really into wearing things sloppy, or with holes in it, and that has never been part of the Japanese Ivy experience.” Similarly, what we today call “sprezzatura” - haphazard disregard for one’s looks - is not a part of the Japanese-Italian look. The typical Japanese nods in this direction - for example, the back blade of the tie worn far longer than the front blade - are meticulously calculated for dramatic effect rather than simple remainders of a long tie on a short man. Rather, the Japanese approach Italian style more with the original meaning of “sprezzatura” - orchestrated, studied indifference. If Japan truly did save American style, perhaps Italian style is next.