Pros: Soft leather, very comfortable, very stylish without being too loud, very roomy
Cons: Almost no E-widths were made, slightly large in the heel 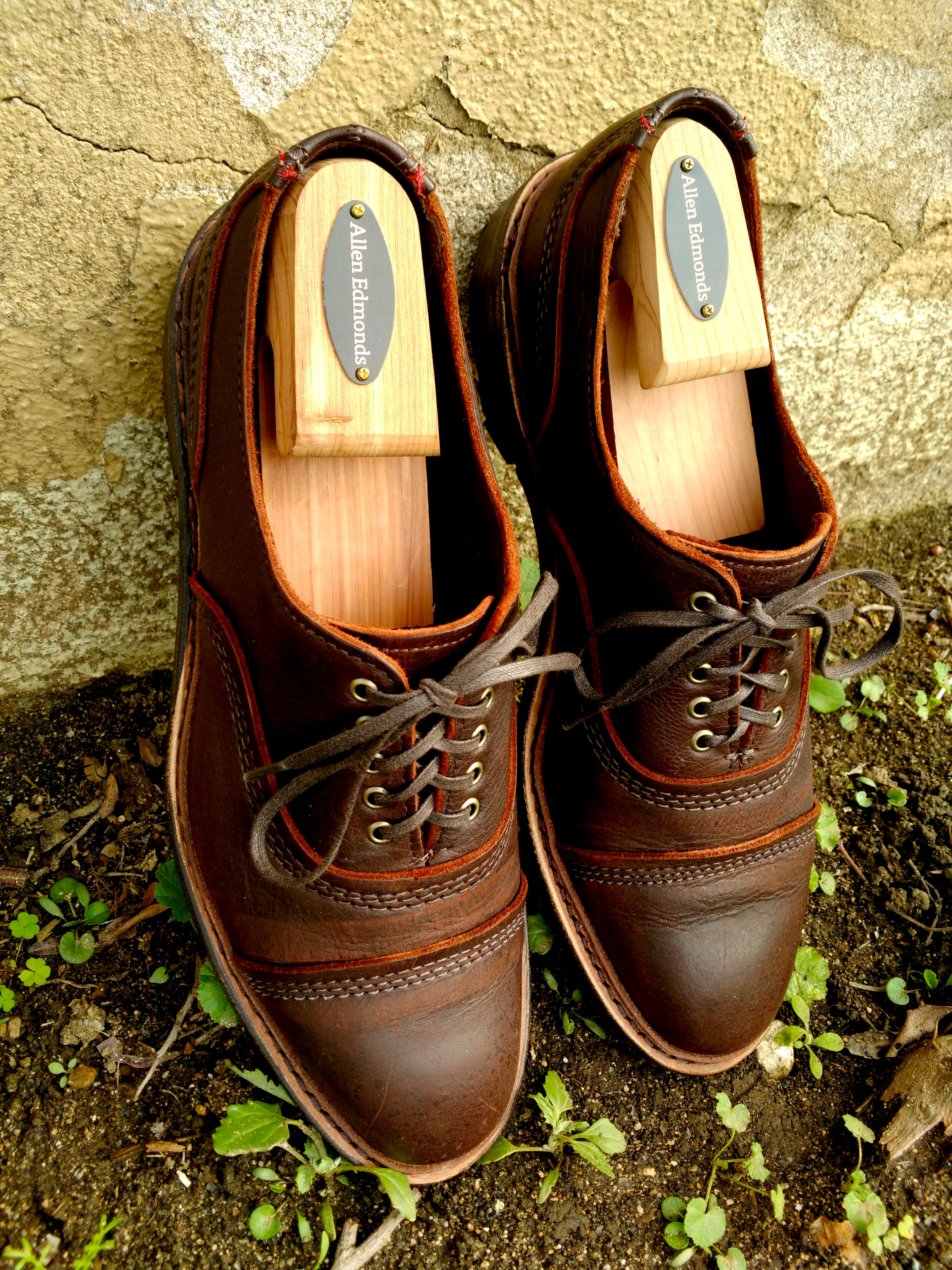 A friend of mine told me several times that he thought I should pick up a pair of Overlord shoes. I admit that looking at the online pictures, I wasn't really that interested. That was until I saw a pair in person for the first time. There's just something about seeing this clever design in person that made me realize I had to own one. For a casual shoe, there's few shoes that look better than this one. This cap-toe keeps the design simple, but includes triple stitching and just the right amount of color contrast with the white and dark orange colors. The shoe is great for stranding out in just the right amount for someone who doesn't want their shoes to be too loud. This shoe will go well with just about anything minus a suit.

As far as the materials, this is not the usual Allen Edmonds leather, but instead, it uses kudu. The leather has a unique look, feel and smell (and not a bad one). The leather is very soft and stretches more than regular calf leather. Keep this in mind though should you decide to purchase these, as this can be a double-edge sword. Had this been calf, I would not be able to wear these (more on this later). Although the Overlord has the double leather sole for extra support, the shoe does a nice job of making ti not very noticeable. I'm not sure why, but the Overlord's insole was far more comfortable than my original Leeds, which has the same one.

In terms of fit, this is going to be a shoe that won't work for everyone. The Overlord is mostly true-to-size, but there's a couple things to consider. The kudu leather gives the shoe a slightly more loose feel in the heel. Add to this the fact that the 201 last is slightly wider than the 65, and this could make the shoe impossible to wear for some. The toe-box feels great and there's plenty of room and volume above the toes -- maybe even too much for some people's tastes. I doubt anyone will have their toes pinched in this shoe. Many people state that the 201 is longer than the 65. I compared this shoe to my Park Ave in the same length, and the Overlord was just slightly longer (maybe 1 or 2/16ths of an inch longer). In other words, the length shouldn't be a big issue if the 65 works for you.

The minor issue I have with this shoe is that the instep cone isn't as roomy as the 108 last. As a result, I have a slightly wider V than I wanted, but I knew that this leather would stretch more easily over time. This is why if these shoes were in calf, I would have passed on them. I cannot stand tightness at the instep in calf, as it never seems to stretch enough to become comfortable. When I first tried these on, I wanted to ask for an E-width in a 1/2 size smaller (like my Park Ave size). However, this would not have worked, as the heel would have been too wide. Also, it's worth mentioning that this shoe is shorter at the heel than other AE shoes. This fact combined with the slightly wider heel may give some people slippage. I am fortunate not to have heel slip, but I can tell these are not nearly as snug as my other shoes.

To conclude, if the 65 last works perfectly for you, this shoe might give you an imperfect fit. If the 65 doesn't work for you, this shoe might work great. Some people will be frustrated there's no E-widths. I'm not sure why AE decided to limit this to only D-widths, as I know this shoe will be too narrow at the instep for some. Going longer in this shoe might work, but it also is going make a long shoe too long. I would encourage anyone who can fit into these with a little instep snugness to consider them. The kudu is far more forgiving than calf, and this shoe is an excellent casual choice. The only thing I wish this shoe had is the poron insole, but that would have probably made the fit impossible for me and many others. These are on clearance right now, but there's not a lot of them left.

Edit: People have asked me for a sizing on this one compared to the 65. I wear 7.5 E on the 65 balmorals, but for the Overlord, 8 D is my size. E width in this shoe would have been too wide for my heel. Most of my AE shoes are in 8 D, so this shoe is consistent with my other shoes. Some people have tried using the same length as the 65 size and going with a D width. This might work, but you are likely going to have a very tight instep and wide V until it stretches. I would not advise this.

One more minor correction -- I was informed that there were a few E widths that were once available. However, they were not produced at a high rate for some reason. 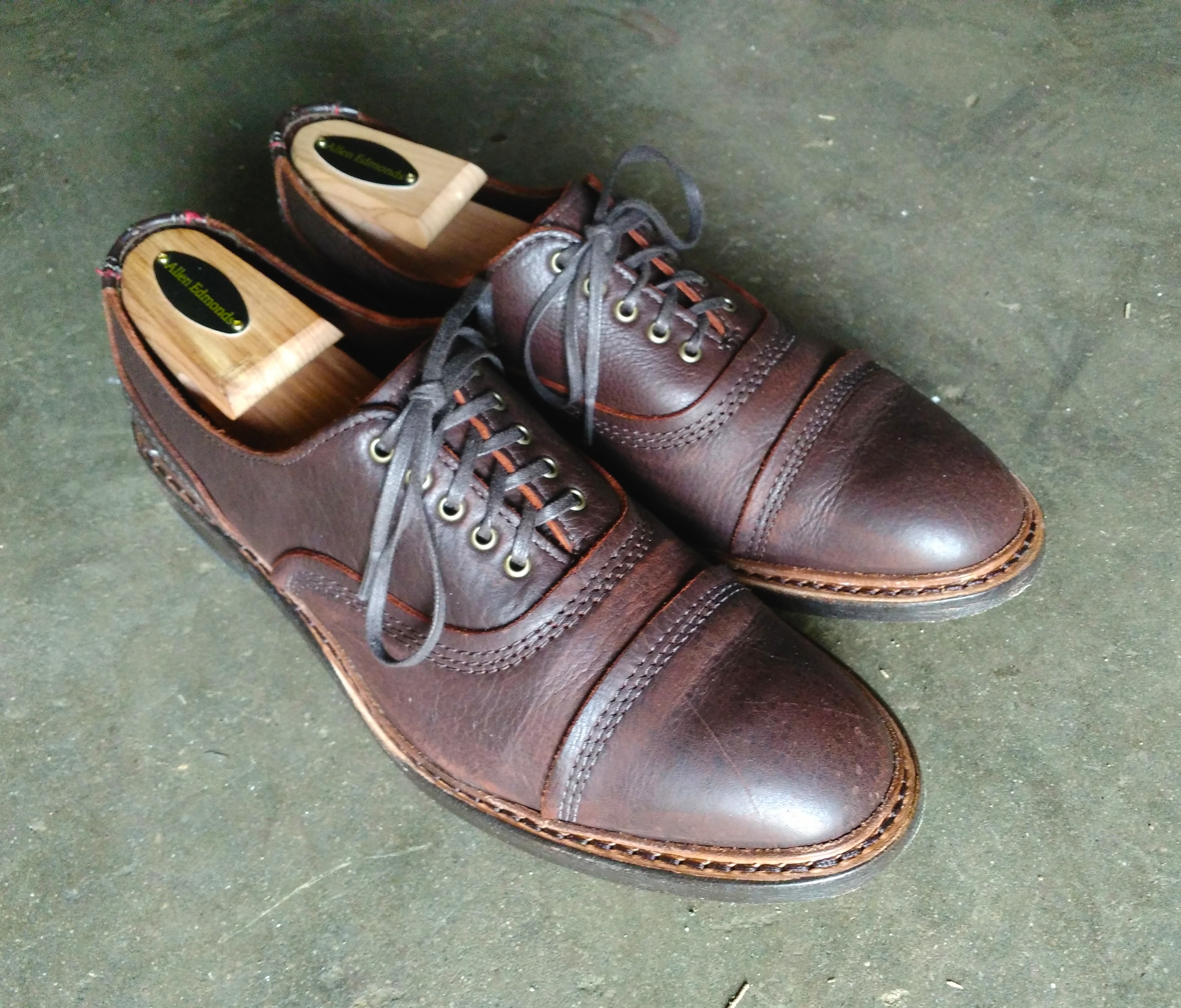