Pros: very comfortable, supportive, great color and design
Cons: best for people with skinny feet, poron insole can affect fit
The Lasalle is a superbly designed dress shoe that can be worn with almost anything, although I don't prefer to wear this one as a casual shoe. The classic, conservative split-toe design (similar to the Wilbert), caught my eye. Similar to the popular Delay, the Lasalle is slightly different in design. The Lasalle is simply a Delray that was re-designed by Nordstrom, but also available through Allen Edmonds. The stitching is larger, but also lower on the shoe, making it more similar to the Wilbert's design rather than the Walton. But like the Delray, it is on the same 108 last, which is designed best for people with narrow feet. One other difference that the Lasalle has over the Delray is the Poron insole, which in my opinion, makes the Lasalle more comfortable. But it also affects the size. More on that later.

I got these from the Ohio Jeffersonville store during a shoebank sale for only $179 USD. They are seconds, but the only flaws I could find were some creases in the toe area. I wouldn't even consider this a flaw because the creases are going to happen anyway. 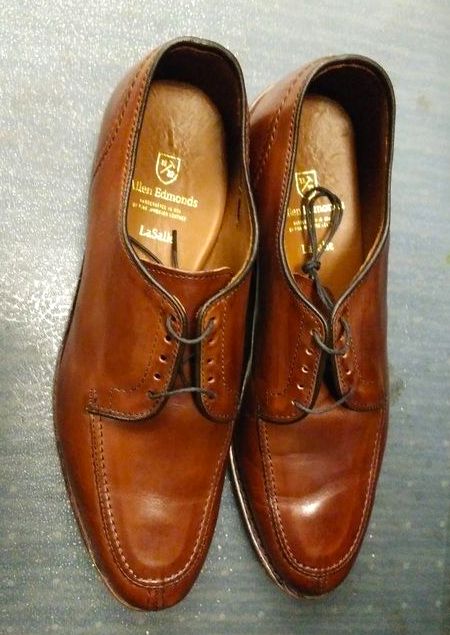 This was also my first time trying the 108 last. I was nervous that this last would not work for me, but I was relieved to find out that it actually fits me better than the 511. Wearing the Lasalle's on the first day, there was some minor discomfort. However, after the second wearing, this shoe has never caused me any pain. I absolutely love this shoe -- in fact, I can't think of anything negative to say about it. It looks great (especially on cloudy days), feels great and fits true-to-size. Something about the 108 last fits my feet better when I walk. I always felt there was a little too much space with the 511 last when the shoe is flexed. If you're wondering how this fits compared to the Carlyle, the Lasalle is similar, but has slightly less toe room.

My shoes during the first week of wear: 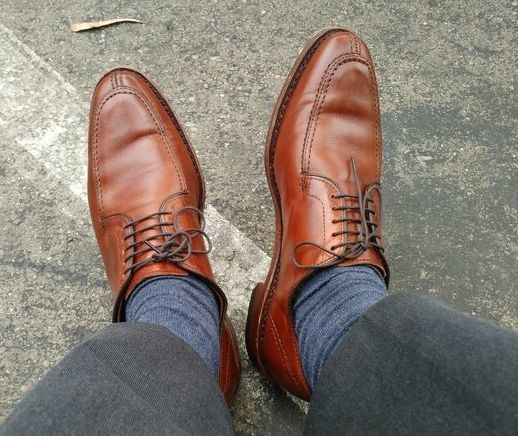 I like this shoe so much that I tried to hunt down a pair of Bourbon Lasalle's from 2014. Sadly, these are long gone. However, they are also currently offered in dark chili for a very low price on Shoebank. The shoe was also once offered in the dark brown that the Delray is currently offered in, but that color is a bit too fuddy duddy to me. 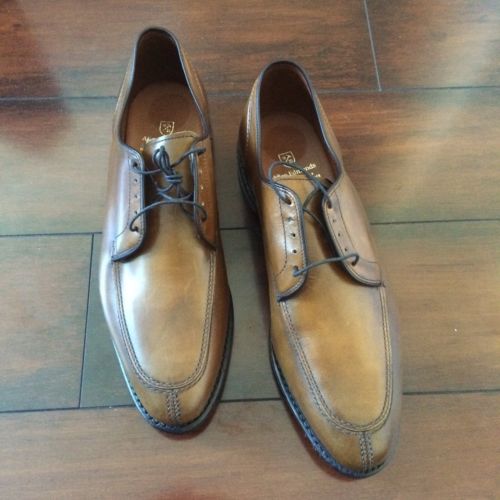 To conclude, If you like the split toe / mock toe designs and have a narrow foot, give this one a try. If it fits you, you won't be disappointed. I paid $179 for these, but I definitely believe this shoe is worth the retail price of $350.

I've never tried the Lasalle's, but have heard they fit very similar to the Delrays. My first pair of Allen Edmonds were Chili Delrays and they are still my favourites. Even after years of wear, they just get better and better.
WTB: 41L / 42L blazers & sportscoats.
They do fit nearly the same. However, there are some key differences. The Delray is better in hot weather, as it has the leather insole without the added poron. The Delray also has slightly more toe room because of this. The Delray insole will also last longer than the poron. I prefer the Lasalle because the poron adds a lot of comfort and makes it easier for me to stand for long periods of time. Both are great shoes and you can't go wrong with either if they fit you.
Profila Binding Instagram
You must log in or register to reply here.
New posts