Wrangler is Better than Levi's

FlyingMonkey said:
I don't know if you're being purposefully stupid, but stupid is how it comes across. And every time you post, you're just making it worse.
Click to expand...

how so? somebody (not me) made a point about fit and then posted two different fabric treatment on stf. is that what is stupid?

edit: and what's with the insult? is this is a cm thing motherfucker?
Last edited: May 8, 2021

i am typically very happy to have convo about vtg levi's or denim in general, i have sold to the most discriminating of buyers

dieworkwear said:
As radicaldog posted above, you've misinterpreted this history. Beau Brummel didn't invent the suit. He's widely credited with having started "The Great Male Renunciation." After him, dress started becoming more austere and simplified, as evidenced by how fops dressed pre-Brummell.

But this story isn't even true. Anyone who's read a bit of social history knows that they should be suspicious of stories that are too neat and simplified. British dress became austere largely because of developments in liberalism and European politics. As democracy developed in Britain, the ruling class wasn't able to festoon themselves in crazy silks, gold, and other kinds of fanciful attire. Cartoons at the time were drawn mocking them (made for the illiterate class). Before this, kings and queens dressed in an otherworldly fashion to justify their place on the throne. As people started questioning this hierarchy, the ruling class had to dress in more austere ways to not get beheaded. You see this with the history of the beheading of Charles I and, later, the trial of George IV. As democracy developed in Britain, the ruling class had to be more modest in their dress to signal puritan values. And since many people ape the dress habits of the upper classes, others followed.

In the mid-19th century, proper gentlemen wore frock coats and continued to do so up until the early 20th century.

Here's how Prince Albert dressed in 1854

This is how the ruling class dressed at the signing of the Treaty of Versailles in 1919.

Keir Hardie, founder of the Labour Party, raised a stink when he wore a suit and a deerstalking cap on his first day as an MP.


MPs at the time wore frock coats, silk top hats, and firmly starched collar. Kier wore a suit to signal his allegiance to the working class in London. The British press was so scandalized by it at the time that they wrote, “a cloth cap in Parliament!”

At the turn of the 20th century, the suit was worn by clerks, shop keepers, and administrators. The frock coat was worn by politicians, financiers, and people of "respectable" professions, such as doctors and lawyers. If you went to a "respectable" place such as church, you were expected to dress in something more formal. Samuel Pearson wrote of the suit in 1882:

"The working classes of England are far behind those of France in the matter of dress. In Normandy you meet with the neat, white, well starched cap; in Lancashire with a tawdry shawl ... The men are worse. They never seem to change their working clothes when the days work is over. Those who go to chapel and church have a black or dark suit for Sunday wear, generally creased and often ill-fitting, but on other days it is seldom that you meet with a nicely dressed working man or working woman."

H. Dennis Bradley, a Bond Street tailor, wrote of the suit in 1912, lamenting the sliding dress norms among the lower classes. This was around the time the suit became increasingly popular.

"Surely, it is not logical to imagine that the present century, which in general progress promises to make the greatest strides in the history of the world, will be content to continue the negative fashions and the drab and dreary colours which are the legacy of a century admittedly decadent in the art of dress. The fashions of the men of the eighteenth century were, from an artistic point of view, almost perfect. Why did they decay during the nineteenth century to a degree of hideousness which was a positive offence to the eye -- to a retrograde ugliness without parallel in any era?"

Can go on for many more quotes. But suffice to say, at the turn of the 20th century, the suit wasn't considered upper class. In fact, the upper classes lamented the rise of the suit.
Click to expand...

DFWR you’re right that Beau was a transformative figure. As Radical Dog noted, BB’s innovations were perhaps necessary but not sufficient to produce the development of the modern suit; he wore contrasting color separates after all. What has always been striking to me are the Treaty of Versailles photos, such as the one DWW posted. It may not be clear in that image, but these upper-class politicians are wearing contrasting (typically striped) trousers, not a modern suit, in 1919, a century after Beau’s heyday.

As DWW notes, there were a lot of larger social and political forces that allowed BB’s influence to become a defining one for modern menswear as opposed to just a brilliant one-off individual social style.

DWW is not just another guy posting on SF, he is also a full-time menswear professional writer. His eponymous site is well worth a look. The writing is always grounded in accurate history where that is relevant to the topic.

I have differing views on many issues, but that’s due to different interpretations of the facts, not because I have ever thought DWW’s facts were materially inaccurate. Radical Dog is right, IMO. This is probably not a hill you want to fight on.

or we could talk about the origins of suiting but in that case i'm out. peace motherfuckers

(stf is a garment treatment)

Jeans have now become so expensive that suit pants are often cheaper. For example, I bought a pair of new Peter Millar dress pants that were well tailored, fine wool / linen fabric, for $25 (on the 'Bay of course.) You can't buy used jeans for that price, Levis or otherwise.

So now I have a dillema of what to wear when I'm down in the engine room?
S

When will people learn DWW has endless receipts

Sounds curious to say that there is only one type of jeans that is acceptable.
Like if a SW&D guy was saying that there is only one type/make/cut of suit that is acceptable despite taste, morphological type, etc...
Also curious to talk about real things and copies in a thread dedicated (at first) to historical brands. It is true that Levi's were the first to produce "work-pants", but soon pioneering brands like Levi's and Lee influenced each others. Wrangler came later.
With time, i began to appreciate diversity in jeans, and i was a bit bored with 501s, even if i am still wearing one from time to time. Main problem with Levi's mainline is the drop in quality, i used to keep pre 2000s 501s around ten years, but the last i bought, i kept it three years, then it was good for the garbage.
LVC is much much better of course, but i can't speak of nowadays LVC jeans, that are no longer made USA and in US made denim, because i don't own any.

The only Wranglers I have at the moment, a curiosity as they are selvedge. 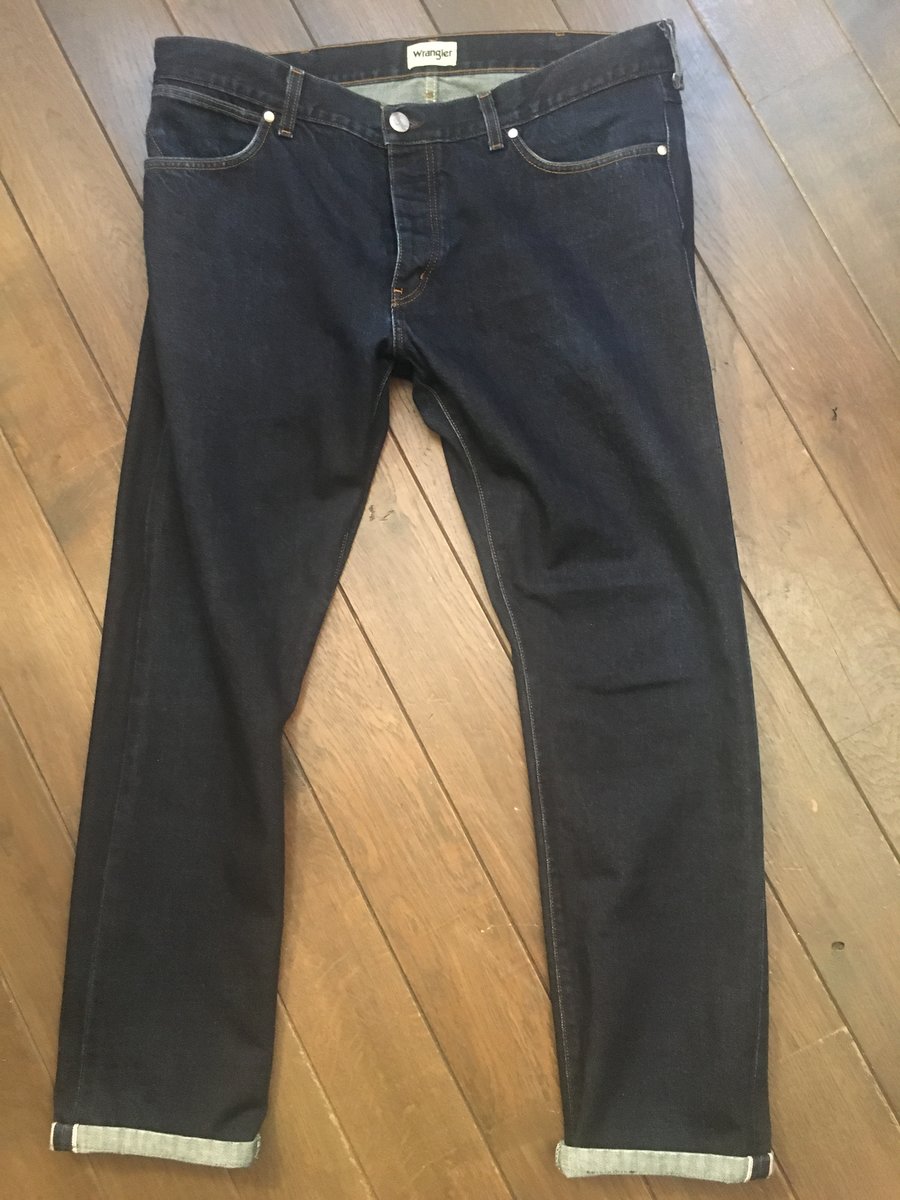 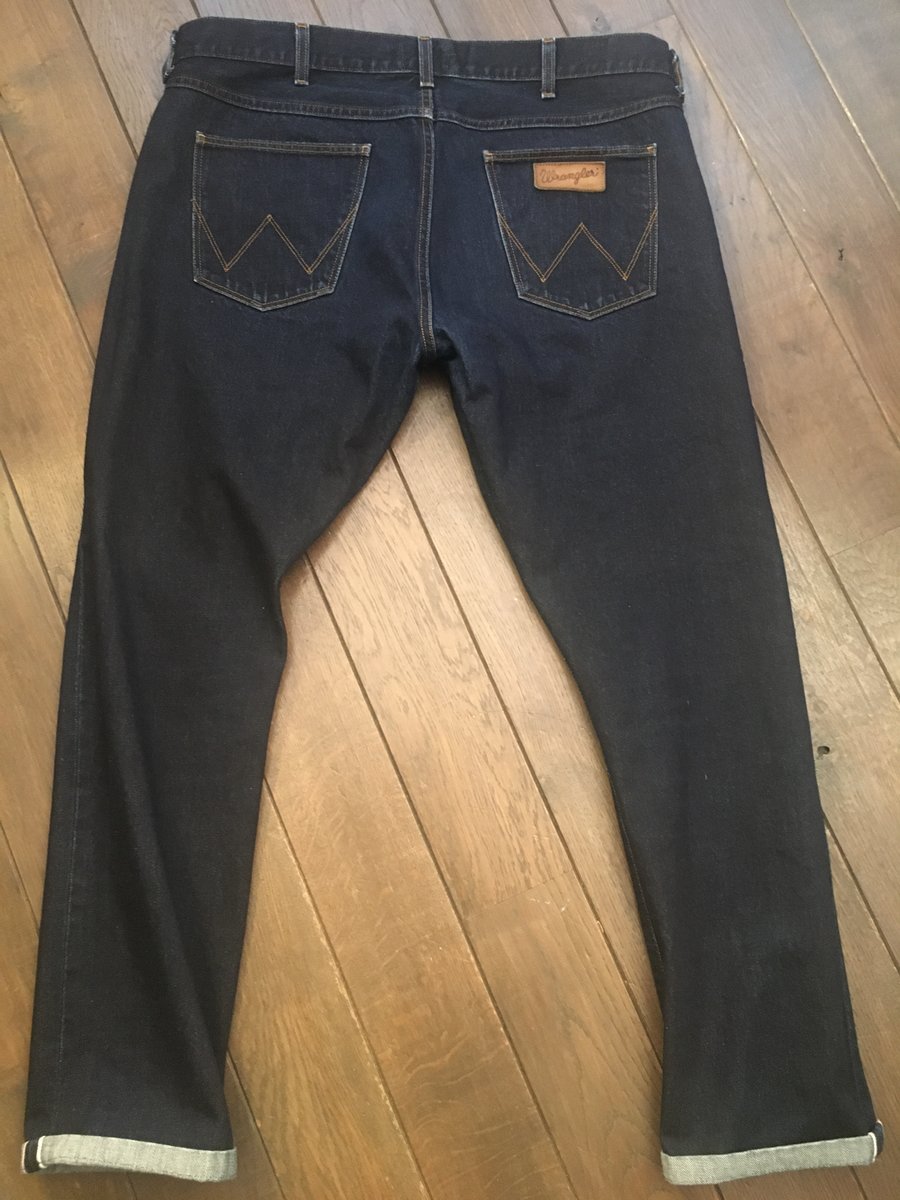 And to stay on topic, yes I find them better than contemporary mainline Levi’s.

re Wranglers: Wranchers are kinda hip right now, just fits into that category of crap products like PBR that have their day in the sun for some unknown reason. Wait it out.

Wranchers never been my thing.
I loved a good pair of Levi’s sta prest in the time.

From an old guy perspective it’s just not the ‘60’s any more. Jeans were consistent and well made here in the US. Now they are made in the Middle East, Asia (not China), Latin America. I was a wrangler and Levi’s kid, whatever my mother would buy, then strictly Levi’s (HS and college and beyond). Consistency went out the window years ago. I can remember trying on many pairs to get one that fit well enough. Later in the early 2000’s (2010 or so) I noticed Lee Premium and Modern. Lee’s did fit me better than Levi’s by this time, they are all imported but those Lee’s just seemed to fit my small butt better. I don’t wear them often but COVID made the Lee’s and my Khakis a staple when I go out of the house, easy to wash and i really don’t care if I am in jeans these days. If I ever need a new pair of jeans I will look at Wrangler again but if I maintain my weight I probably have enough till I die. But all said, Levi’s or Lee’s are both inconsistent in fit from one pair to the next and patience is needed. WeRE they like this when I was young? Maybe, but I probably never really looked. $100 for jeans is obscene for me, $50 as well, but my local shop that carried hundreds of pairs of jeans has since left and I am too picky to want to try mail order again. I found Lee mail order (direct from Lee) to be very inconsistent as well. Most of today’s jeans and I believe khakis as well are made for the liking of young boys, not guys of my age even though I am still slim. I will stick with what is in my closet.
You must log in or register to reply here.
Share:
Facebook Twitter Reddit Pinterest Tumblr WhatsApp Email Link
New posts