Why isn't pink a popular color for men's fall/winter clothes?

Do most men really prefer their fall/winter clothes to be in more conservative fall colors, and prefer their brights and pastels for the spring and summer?
J

Are you answering that you prefer conservative fall colors, or do you buy pink clothes in the fall?

I tend to wear fall colors in the fall

I tend to choose based on fabric and texture, rather than color.
J

I have a pink tie and a pink seersucker suit but pink isn't really a color I wear often. I don't wear much red either

Do most men really prefer their fall/winter clothes to be in more conservative fall colors, and prefer their brights and pastels for the spring and summer?
Click to expand...

I prefer pink year-round, to be honest. During the fall/winter months if I could find a nice baby pink cashmere sweater I would totally go for it. I think darker, more conservative colors just 'make more sense' for the fall, but I support you going against the norm and wearing pink if you feel like it. It could be the new thing for men's F/W fashion!
S

Personally, I cant say I have anything more than a pink tie in my wardrobe. But that pink tie is probably my favorite one of all. It's highly versatile with just about any suit and it adds a sharp contrast to my outfit. I get compliments on it constantly.
J

It isn’t so much that pink isn’t a masculine color but that red tones often don’t go well with skin tones. And forget it if it brings out the red in your eyes

Personally, I do not look well in pink as I've grown older. Mid-80's Miami Vice era? No problem, but those days are long since gone for me. LOL.
A

I think the OP is right in that the main reason is that most people are risk-averse and conservative in their fashion sense, and don't consider pink to be a colour suited to colder climates (with the partial exception of pink shirts). I have a pink sweater that I've gotten good use out of during spring/summer nights, but other than that I tend to just stick to more sombre, boring colours for most of the year (I'm in London though).
J

Gatsby had a pink suit which was unique enough to be remarked upon and that was close to 100 years ago. Pink just isn't a flattering men's color except as an accent. Shirts, ties, are OK but not so much pants, jackets, and sweaters. It makes large men look ridiculous and younger men like their mothers dressed them. Occasionally some men can pull it off, like I said I have a pink seersucker suit (alternating pink and white stripe) I wear occasionally on a hot summer day and it looks summery, but not many or often. I could maybe see a pink boating blazer under some circumstances but it would take a certain sense of style to pull it off and not everyone has that.

Same as Navy blazers are considered a staple but red blazers make you look like a fox hunting wanna be. Pink would be good as one of the colors in a Madras or Plaid but not the dominant color. Like I said it makes a great accent color.

Now there were also a few Napoleonic era uniforms used pink, often as a facing color, to great effect and the trumpeters used to wear the reverse colors (the facing color becomes the main color and the main color the facing) as can be seen by the uniform of a trumpeter of the Grand Duchy of Berg. You don't get more stylish than this but you can't really wear it anymore 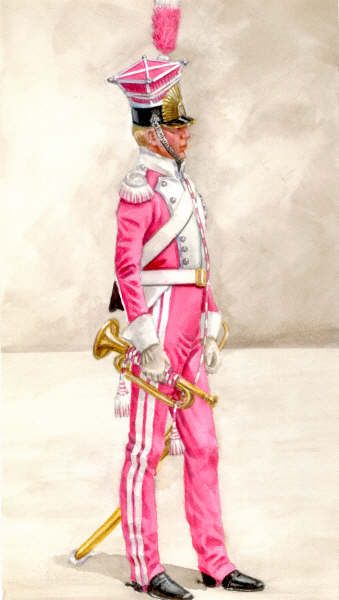 jasamineiscute said:
http://en.pop-fashion.com/details/report/t_report-id_3990-col_125/ I think this report does make sense.
Click to expand...

They don’t sell enough to make them. If you want a pink winter jacket have it made but I think you will grow old waiting for it to become a fashion item in quantity for all the reasons I specified. Pink is a summer color for many reasons among them it looks odd on the type of clothes you wear in the winter. A pink jacket or overcoat doesn’t work

Where you will find a small amount of pink clothes in fall/winter collections is some preppy brands. I know IZOD has included a small number of pink fleeces in their fall collections the past several years, and I own several of them. It remains to be seen if their Fall 2018 collection will include it. IZOD did include a lot of pink for Spring 2018, so I wonder if this will carry over into their Fall 2018 fleeces.
You must log in or register to reply here.
Share:
Facebook Twitter Reddit Pinterest Tumblr WhatsApp Email Link
New posts