Time to get up the road. Jarmans. 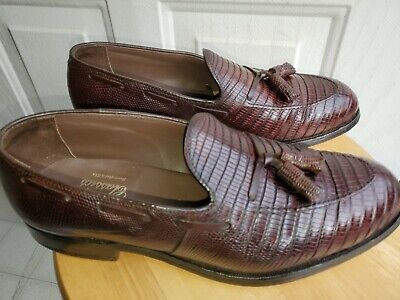 These shoes look like they have not been worn much, are in great shape.
www.ebay.com

Are these Florsheim from the 60s? It has the common 60s rubber heel deterioration.

Good price but B width. 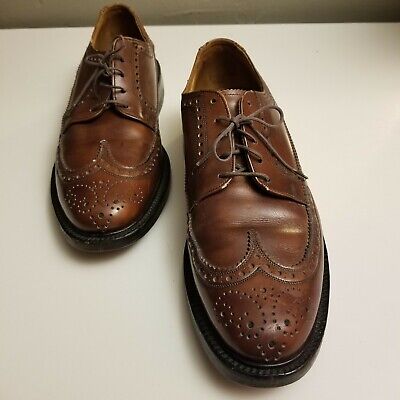 Hotel Cali said:
Are these Florsheim from the 60s? It has the common 60s rubber heel deterioration.

Good price but B width.

Also misrepresented as Imperials. Those are blue label shoes.

Jiqea said:
Some of the write-ups are pure bunk as well, at least for the shoes that I know anything about. But credit where credit is due, great photography and an amazing collection. It is fun to look at and he does seem to move a few pairs. More power to him.
Click to expand...

He will also attribute shoes to the incorrect maker. For private label manufactured shoes that he has for sale on his website, this is not uncommon.

suitforcourt said:
Vintage violation. I've been wearing boots lately. Courts are still in limbo but I return to the office on Monday.

In the mean time, my son asked me to take pictures of a rainbow. After I dropped him off, I walked to a local man made lake to enjoy some time alone.

These are Wolverine 1000 Miles that a cobbler added lug sole protectors to make them unusable in any weather.

that reminds me, I kept meaning to ask what people thought of those Wolverine 1000 Mile boots. Good, bad, meh? I know they're expensive but they look nice.
"I'm a happy pebble from Gladstone, Minnesota" In Trump We Trust happypebble said:
that reminds me, I kept meaning to ask what people thought of those Wolverine 1000 Mile boots. Good, bad, meh? I know they're expensive but they look nice.
Click to expand...

I bought these near NOS on ebay for cheap. They are durable but not fashionable. I vote meh.

I like my Chipppewa Ellison the most, in terms of fit and comfort.
Pant size - 34 R, inseam about 29 inches

Hey CW:
You make thrifting seem so easy but I know you must work very hard at it. I wish I had your talent.
kilowatts

Thanks! I'm lucky that my work gets me out and about so I can visit stores a couple of days a week, but weekend thrifting is over for me since Covid hit. Lately the end of day stops have been working the best.
Last edited: Oct 2, 2020

Vintage shell MacNeils closing out the work week -- have a good one fellas! I acquired a lovely pair of late 1950's Dack's "Cambridge" U-wings yesterday. This is one of my favourite Dack's designs, and I have owned at least 6 pairs over the years. The Cambridge shows up in advertisements circa 1950, no doubt to cash in on the growing U-wing fad that started in the late 40's in the United States.

The first iteration of the Cambridge was offered in smooth calf with four eyelets, exterior metal grommets, and a thick leather strap "lace" with a buckle, as seen below in a 1950 advert. By 1954 this design was changed to add an extra pair of eyelets, with period advertisements illustrating the Cambridge in now familiar Scotch grain leather, still with exterior metal grommets and now using regular heavy laces. The pair I have just received are identical to the pair shown in the 1955 advert shown below, with the exception that the metal grommets are now on the interior of the lace stay flaps. I believe the laces to be original.

I suspect my pair date to sometime 1958 or shortly thereafter. They have the "Extra-Quality" sock-liner which was introduced in 1958, but retain a 3 digit style code (392). It is highly unusual to see a 3 digit style code on a post 1958 shoe (my first time), but in reviewing the 1950's ads I realized that the Cambridge was offered only in brown. The fourth digit in the Dack's style code was added circa 1955, with a 3 in front of the old three digit number indicating black and a 2 indicating brown. Perhaps because there was no black version of this shoe offerred in the 1950's Dack's just continued on with the old style code. In the early 60's a black version of the Cambridge was available, and going forward both the black and brown versions have a four digit assignation. The Cambridge continued to be offered right through until the mid-80's, even after the U-wing craze had ended.

My pair also intrigued me in that the toe medallion is different than all other pairs I have owned. It has a gracile bird in flight (or moth) design as seen below. A careful examination of the 1955 advert shows this same design. I have provided a comparison of this early medallion to the later version in a photo below, with the earlier medallion on the left. The shoe on the right of this image is still quite early, with nailed leather heels, which leads me to think this change in medallion style happened circa 1960. It is quite uncommon to find Dack's with nailed leather heels after that time. All of the Cambridge Dack's that I have seen were built on the 67 last.

Overall I was pretty excited to pick up this pair and in a wearable size for me, 9.5E. I was also pleased to find I already owned a pair of Dack's 1950's 695 "Shield" shoe-trees that fit perfectly. These originally had v-cleats but made with CG. One of many bad moves by Florsheim.

But CG make for great rain shoes. A cobbler rebuilt with Vibram Eton soles so now I can wear them anywhere.

I hope the brotherhood enjoys the weekend. I return to work Monday but still mostly working from home. It’s a little cold here in the Mid-South. Thus, I could not wear my typical work from home polo and shorts. So, I figured some fall shoes would be good with jeans.

These are some of my VERY favorite shoes. They are MTO suede Florsheim from the 60’s. VERY light wear. I’m pretty sure I just scratched up my wood floor with the vcleat! 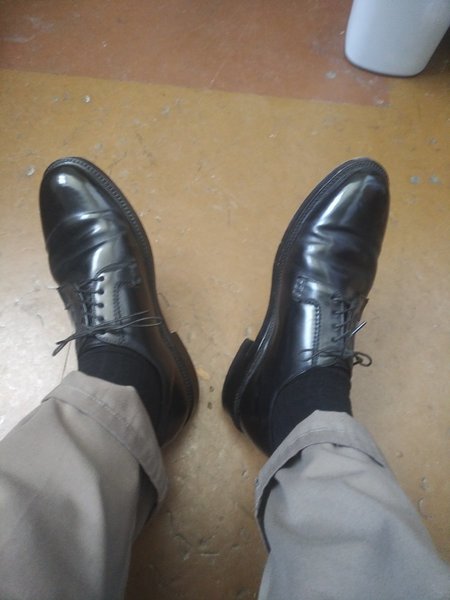