suitforcourt said:
But I don't wear speedos.
Click to expand...

Yes, very “Canadian” of you to go “au naturel”.

Nealjpage said:
I must admit that the "Textbook of Pain" sounds very metal.

Nobleprofessor said:
There is light at the end of the “work from home” tunnel. I may be returning soon! That means getting to wear real shoes to the office!

To prepare I decided to try on my new to me 96624. I was unfamiliar with this style but have learned there is no discernible difference (to me at least) between it and the 92604.

I was struggling with choosing between two pair of 92604 when I found these from one of my favorite eBay sellers. The cost MUCH less than half of what it would have cost to restore a pair of 92604 even at the more reasonable McFarland price. So, it was a no brainer purchase.


On another note, I am confident I am as much of a Johnston Murphy critic as anyone — in terms of their current styles.

I am also a proponent of J&M’s quality MiUSA offerings even as late as the 90’s. Some of their styles when they were made in USA are on par, or better, with styles from AE. My frustration with J&M is similar to the frustration we all share regarding Florsheim. They both squandered a reputation for high quality shoes and surrendered to inferior materials in the hopes of profits based on volume rather than workmanship.

But, I will give them credit for trying to improve some styles.


I received an email advertising a steep discount on their new “Collection” styles. This is their current attempt to sell a premium line by declaring it as “Made in Italy”. Some of the stuff isn’t bad looking. But, I’m suspicious of the quality. Yet, this pair was 50% off and had 30% off additional markdown. They had a pair in my size. For the price, I decided to pull the trigger.

I was actually quite surprised. The box is sturdy and quality. The box even included nice storage bags. I was impressed even before seeing the shoes. My expectations were fairly low.

But, for the price and knowing that cheap suede is better than cheap leather, I am very happy with my new Tassel loafers.

They’re nice looking. My biggest problem is the faux-welt. They’re half-blake, I dunno why J&M didn’t leave off the faux-welt off, given blake stitch is pretty traditional for Italian loafers.

Thomas Crown said:
As for today,another sunny day for the porch-though not vintage,Allen Edmonds reintroduced a version of the Strawfut leather and nylon mesh spectator from the late 50’s about ten years ago. I wish they’d do that more often,like one reissue from the 50’s-80’s each season. View attachment 1392701View attachment 1392705
Click to expand...

Man, when AE gets it right, they get it very right. I’d give my eye-teeth for a pair of those.

Nobleprofessor said:
I like the Leeds A LOT if they are Shell. I had a pair of calf Leeds and I don’t know if I got a bad batch or what. But, they looked like crap quickly. I also have a hard time with the size. I have to go even narrower on them. They fit, to me, like the Alden Barrie last. Too long and too wide.

BUT, in black or #8 Shell, they look good. I think it is such a plain understated style that they need the interest and depth of Shell.
Click to expand...

Hi Noble:
I have a pair of shell Leeds and a pair of calf. I like them a lot. The last fits well and I like PTB’s in any case. I can see little difference between them and other vintage makes, so I guess this is a glowing endorsement, eh?
kilowatts

Nettleton 4063s, in the vintage eggplant color. Or is it Antique Aubergine? I’m thinking of parking these in the sun for several sunny mornings on my back porch and seeing what happens. Maybe the color will change to something more interesting. 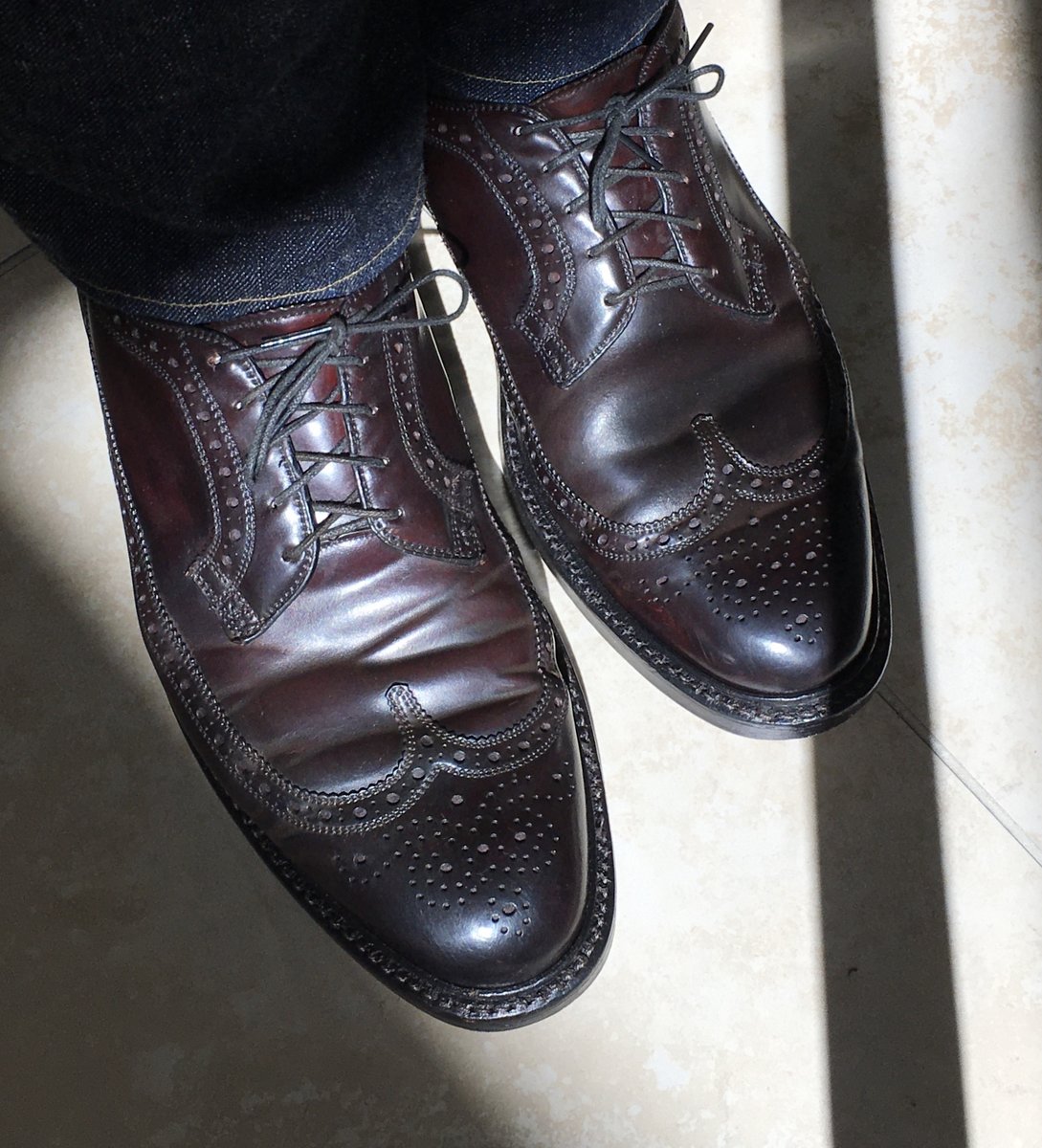 nikolau said:
Folks- what do you think of the Leeds? I’m considering getting a pair in black shell.
Click to expand...

Be careful. The last is a bit unusual. It has a low vamp, which means it can be a bit uncomfortable for those with high (or even average) arches. The toe box is low as well, and gives me some pinky pain. If you have a low arch, it may be a good fit.
Just my two cents.
It is a very classy shoe, especially in shell.

stook1 said:
I tend to buy a bunch of them at a time. For everyday best pricing... don't know. Probably not going to find them for less than $15. You can sometimes get them for a steal but you have to catch a great sale. The last time I bought trees, which was over the winter, I think I got 11 pairs for about $8 or $9 each with shipping included from Lord & Taylor. They are the usual split toe woodlores with the full heel.

Edit: you got me curious if that's what I actually paid since it seemed too low. nope, I was right... check it out. That was a great deal on shoe trees!

If you have a Nordstrom rack, you can get them for $13.95 if you buy two at a time.
I have dozens from them.

Thomas Crown said:
As for today,another sunny day for the porch-though not vintage,Allen Edmonds reintroduced a version of the Strawfut leather and nylon mesh spectator from the late 50’s about ten years ago. I wish they’d do that more often,like one reissue from the 50’s-80’s each season. View attachment 1392701View attachment 1392705
Click to expand...

Weirdly enough, a pair popped up on eBay, in my size. So I bought ‘em: 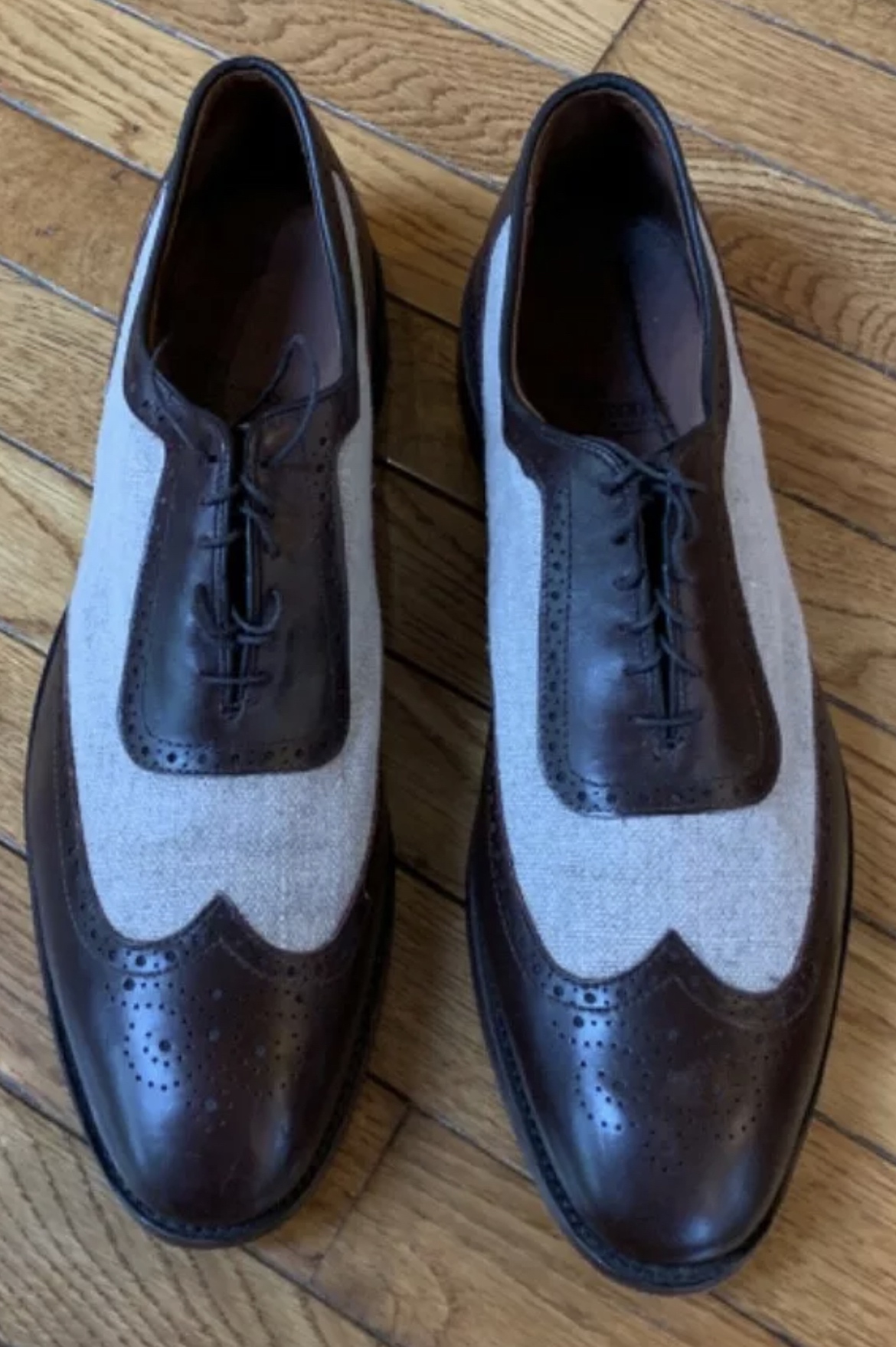 wasmisterfu said:
Weirdly enough, a pair popped up on eBay, in my size. So I bought ‘em:

I’ve got a pair of this exact shoe. They’re probably my favorite Allen Edmonds shoe since the era of the original strawfut.

mormonopoly said:
I’ve got a pair of this exact shoe. They’re probably my favorite Allen Edmonds shoe since the era of the original strawfut.
Click to expand...

Yeah I’ve wanted a pair of these for a long time. These look like they’ve only been worn a couple of times.

wasmisterfu said:
Yeah I’ve wanted a pair of these for a long time. These look like they’ve only been worn a couple of times.
Click to expand...

suitforcourt said:
Pics or it didn't happen
Click to expand... 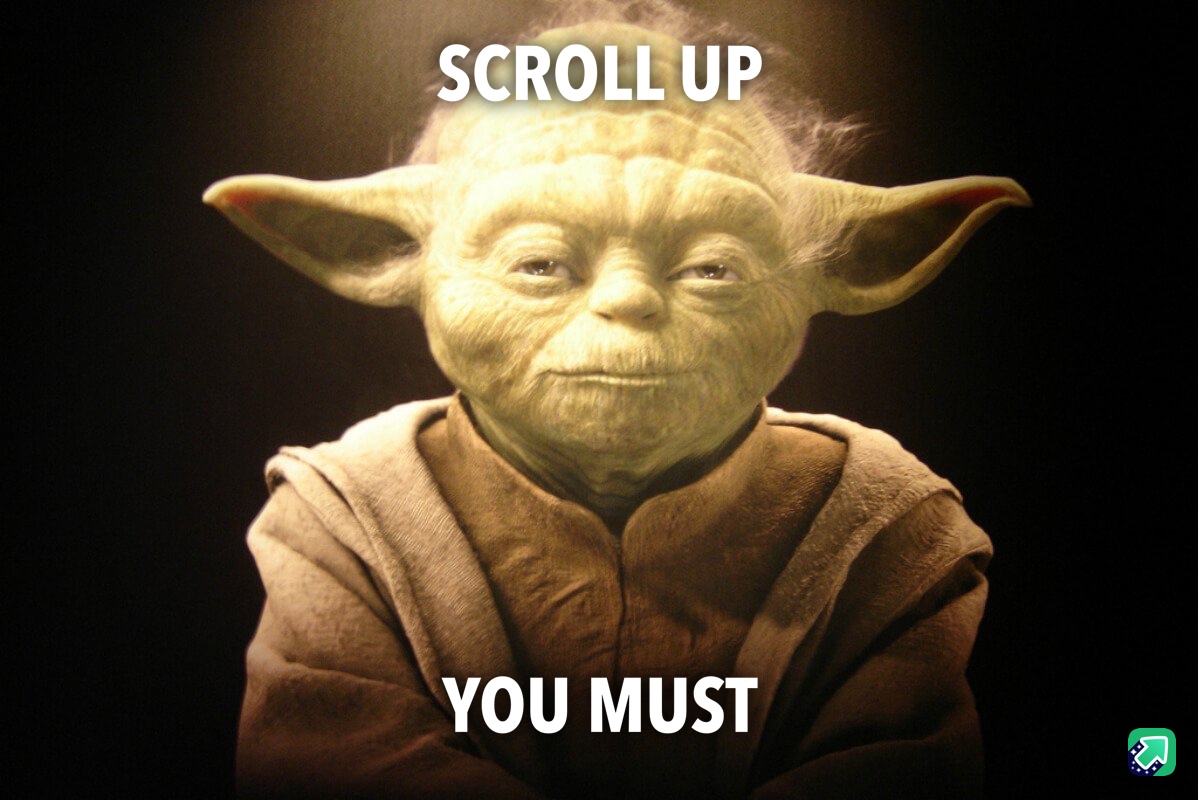 Day two at work with normal dress code. When I restored these FootJoys, we were permitted to wear jeans daily, so I dressed these down with green laces. Also, I didn't have any black laces. Frankly, I like the green, especially with denim, but it doesn't really go with slacks. Guess I'll be looking for a second pair, so I can have one dressy and one casual. 'Cause that's how you solve a problem like this, right? Easier than switching laces. 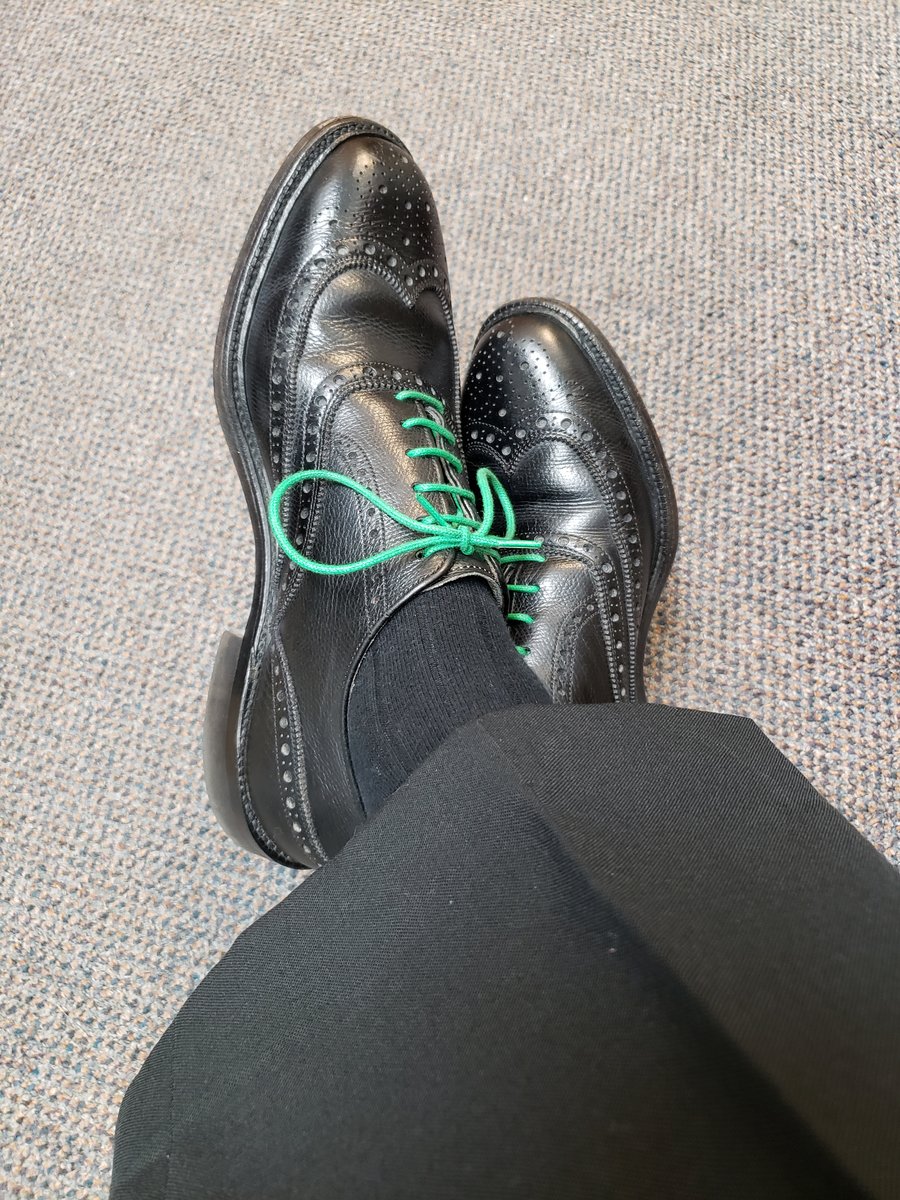 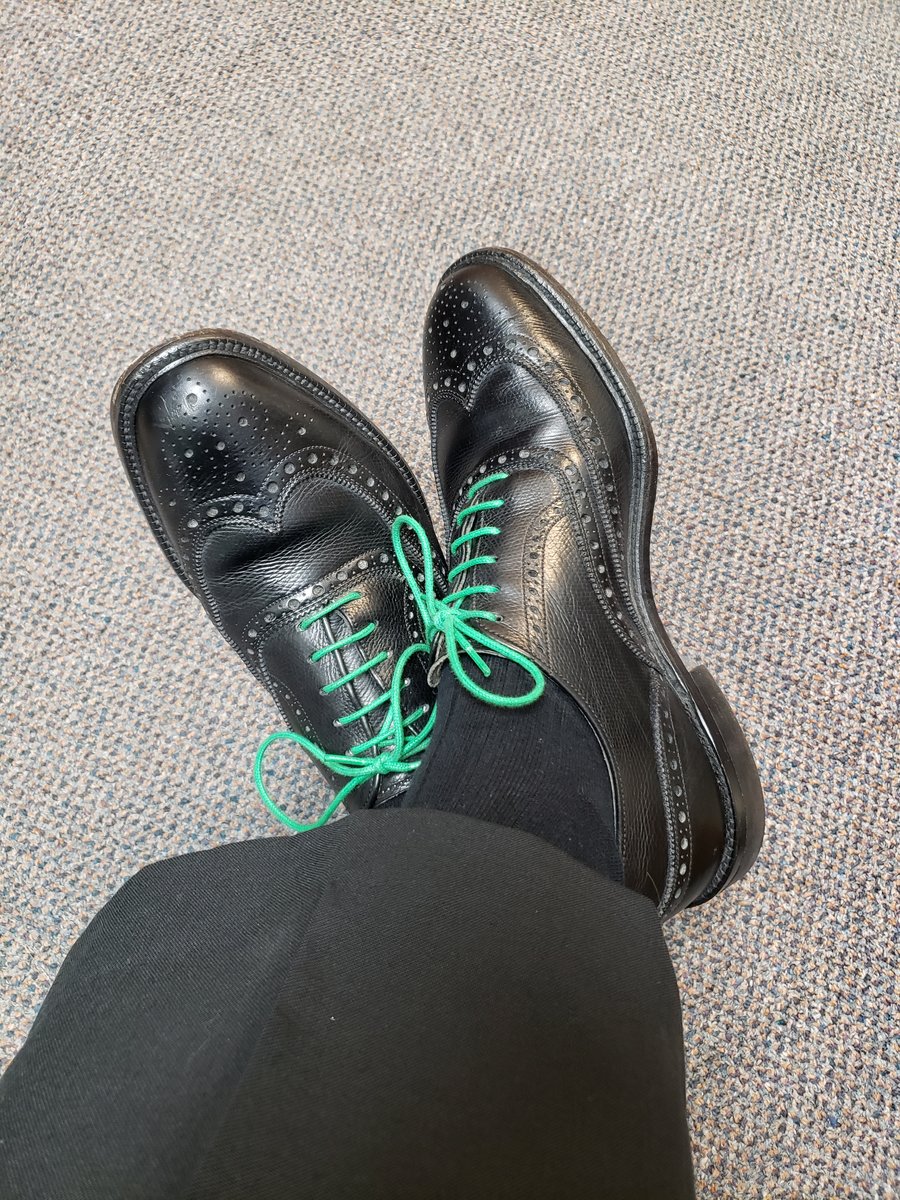 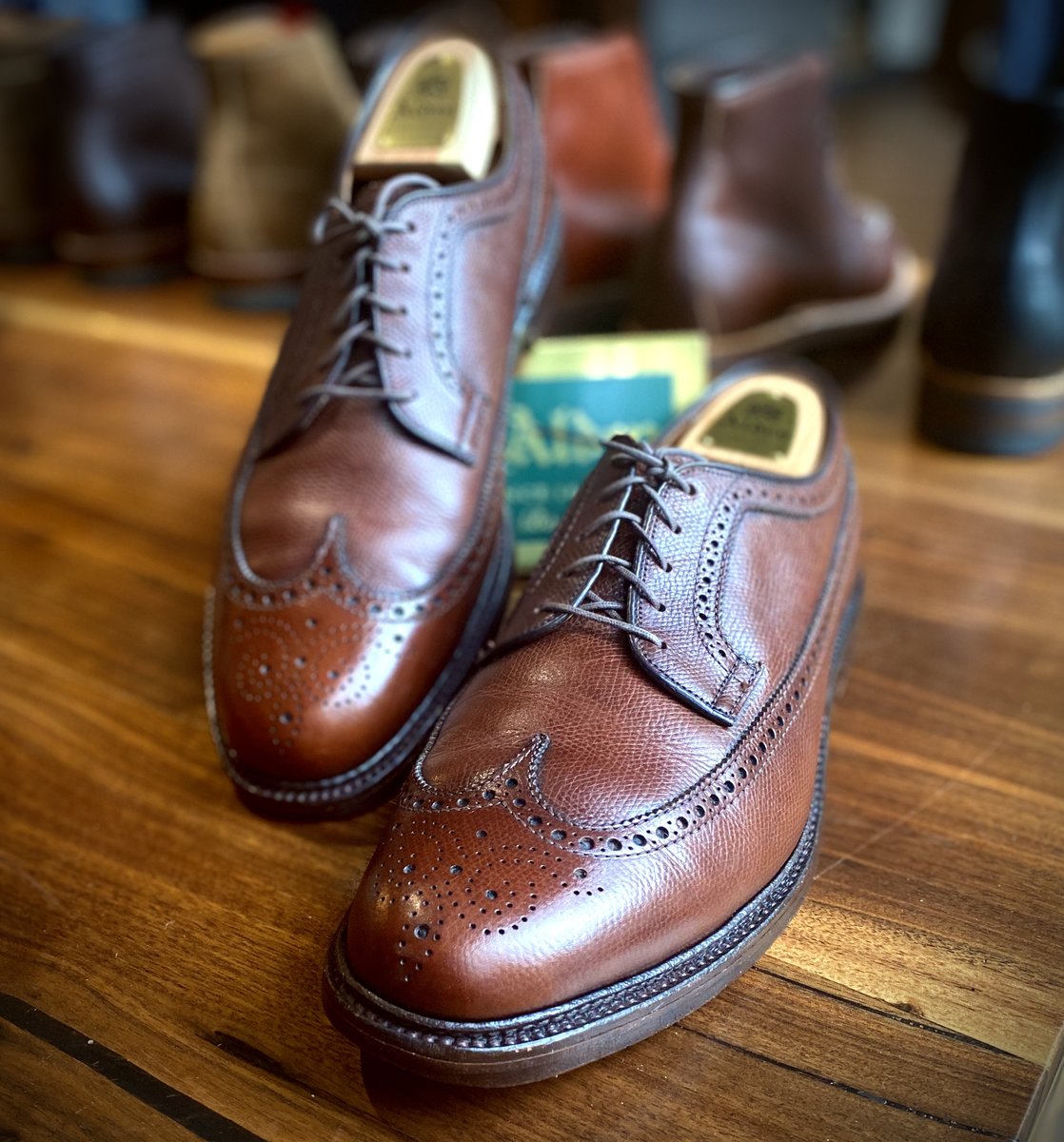 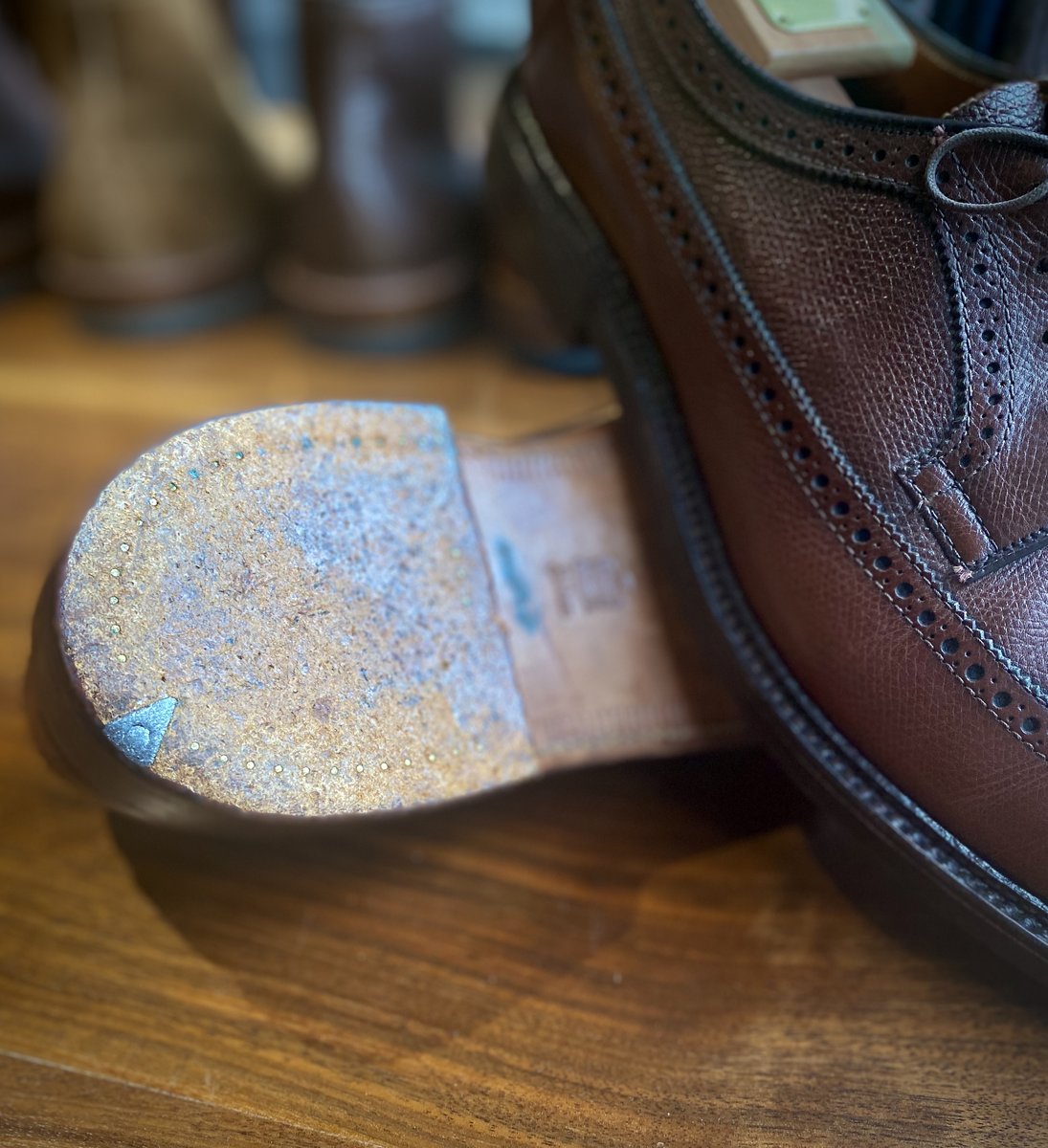 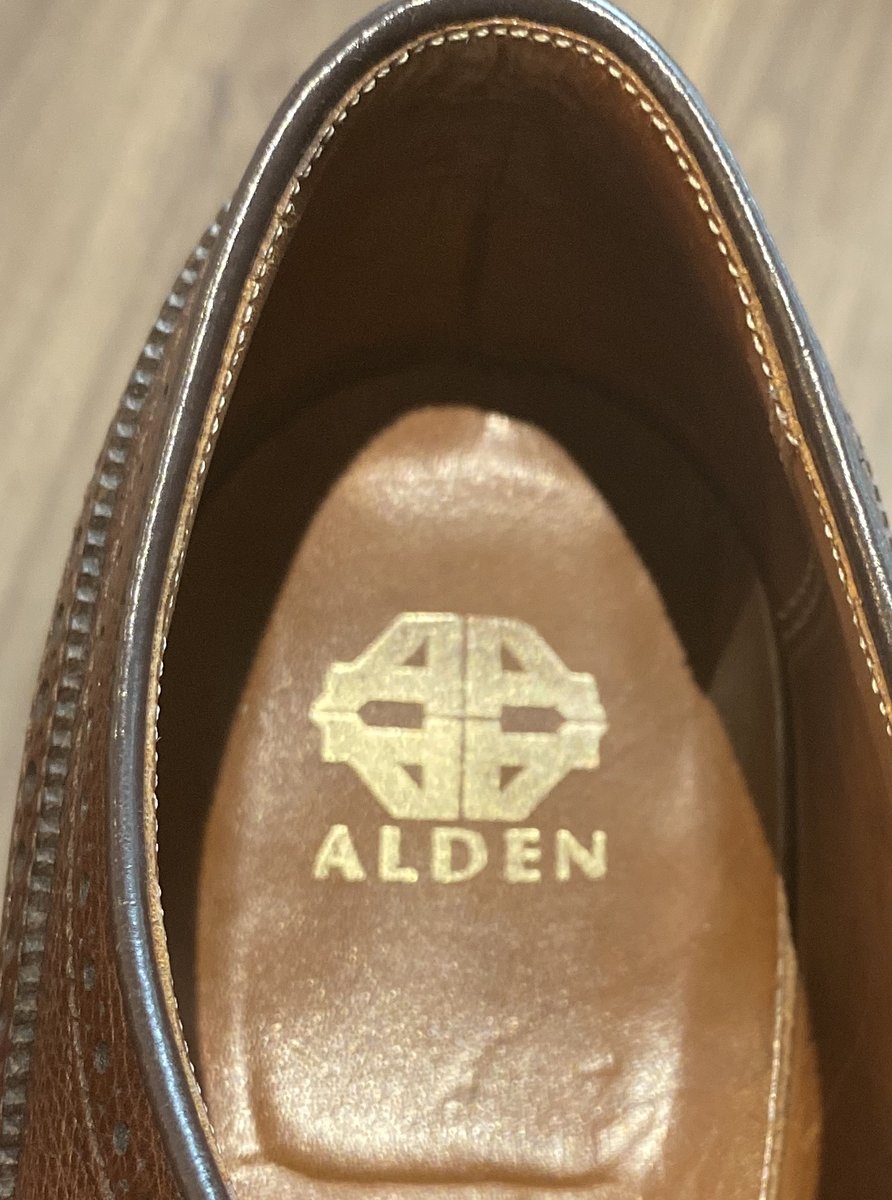 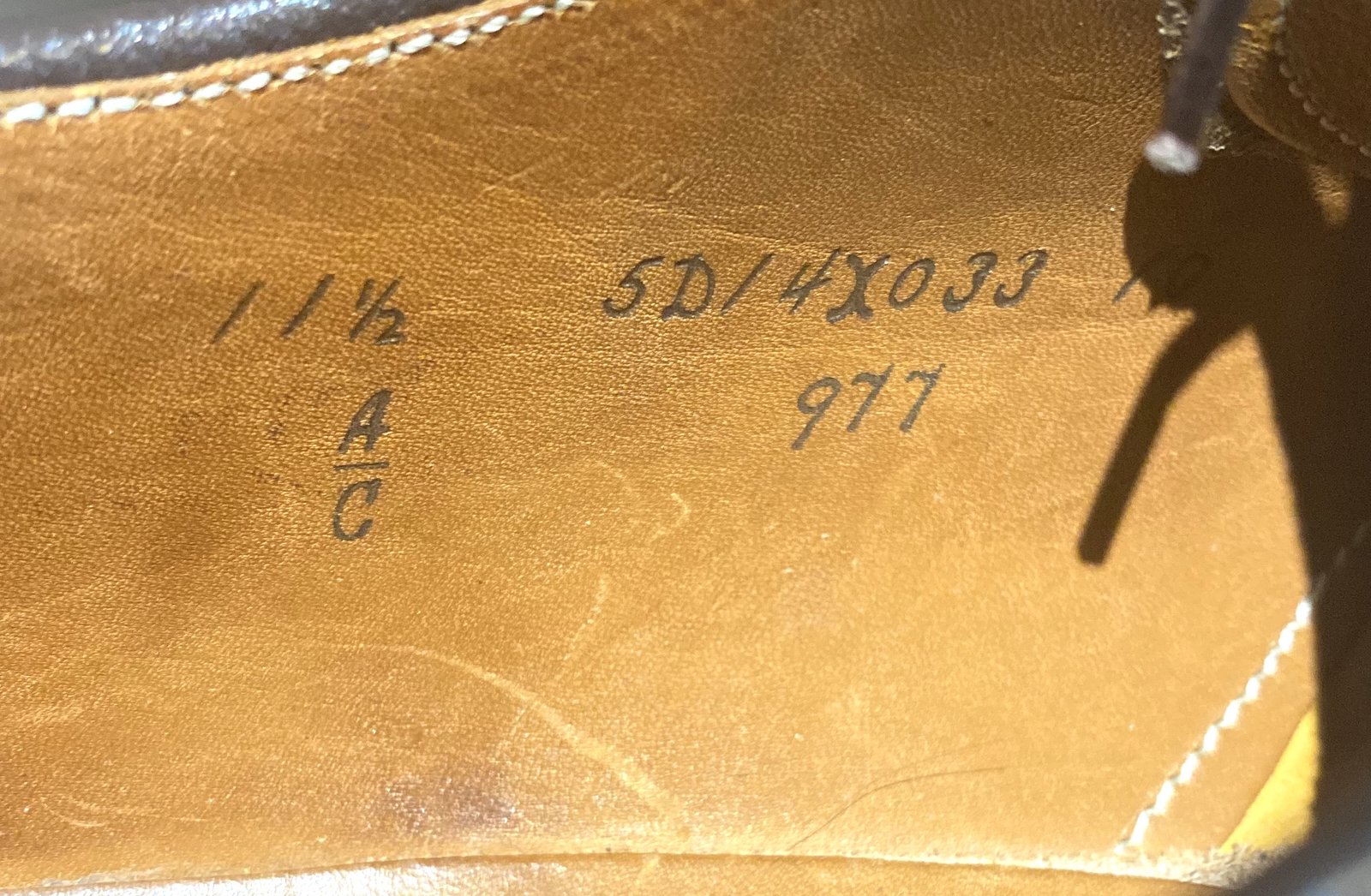 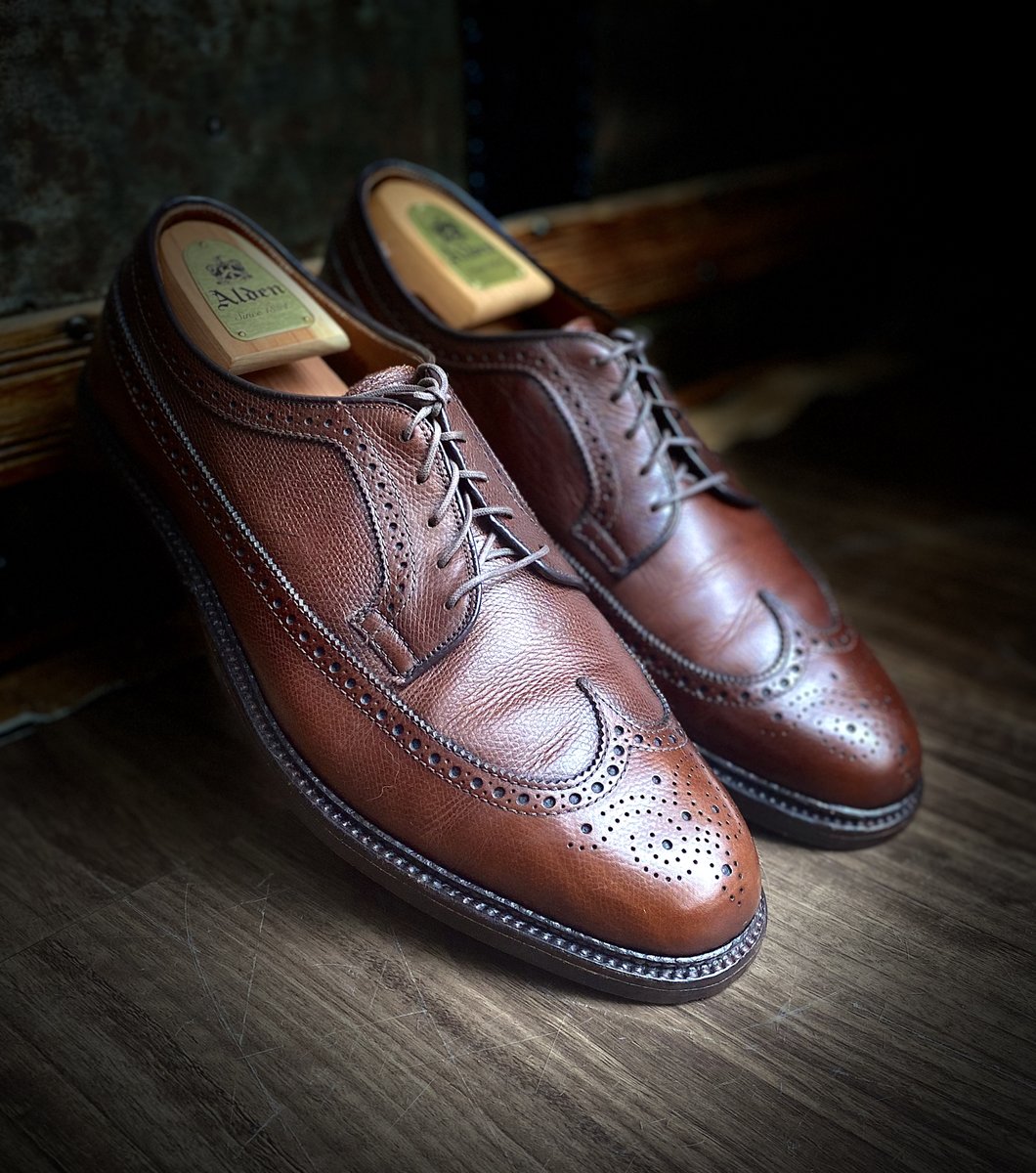