To my mind, they look too wide, given that it's a single-breasted jacket. But then, I like quite narrow lapels in general. The only peaked lapel dinner jacket that I have ever owned was inherited from my father, who bought it from Harrods during the 1950s. It's double-breasted, and the lapel width is about two-thirds of that in the picture that you showed.

You don't give any indication of how broad you are - I think that if you are quite thick-set (for instance like a linebacker or prop forward), then you can do a wide lapel. If you are thin, I would advise against it, although having said that, there are plenty of 20th-century dandies (eg Fred Astaire) who could get away with broad lapels, despite being thin.

I hope this helps - ultimately, you have to decide what sort of look you want to achieve. This is why I will never buy a suit on Ebay, because it seems to me that it's not possible to judge how it will look. I would rather pay the extra, and see it in the &quot;flesh&quot;.

It's not the best angle to view it from, but that lapel looks better than most I think.

I think a wide peak lapel on a single- or double-breasted jacket can look very good, providing that the edge of the lapel, and the lapel points, are 'sharp'. (I'm sure there's a more technical description, but there ya go.)

The jacket in the picture shown has, in my opinion, nice, 'sharp' lapels. It's when the lapel edge and points are wide and 'blunt' that you start to creep into 1970s double-knit polyester territory...

The lapels look good to me. I think that while a slightly thinner lapel might also look good, it would be a mistake to want too narrow a peaked lapel on a tuxedo jacket. Notice the the majority of Dior Homme jackets are notched or shawl lapels. The width of a peaked lapel reaching towards the shoulders enhances those of thinner and more slope shouldered guys and lends sharpness to the physique of more muscular or otherwise bulkier guys.
"Blue Denim in their Veins"

I vote for a slightly narrower label. Strictly on personal preference.

I think it looks fine as well.

LA Guy, I've been seeing a lot of peaked-lapel suits in the Dior Homme ads as well. I think they'd look fantastic, if they weren't satin.

The lapel, measured at the widest point (where the point is) should not be more than half the distance between the inside edge of the lapel to the shoulder seam.

I'm not sure I agree with that rule:

I think the halfway rule would be more applicable if you applied it to the main body of the lapel, in other words, measure it as if the peak were cut off and it were a notch. If peak lapels are kept within the halfway mark they look too small. In my opinion.

The lapel, measured at the widest point (where the point is) should not be more than half the distance between the inside edge of the lapel to the shoulder seam.
Click to expand...

I thought that applies only to notch lapels. In any case:

a) I like wider peak lapels in general, and
b) go with what looks good on you, be they Helmut Lang-esque narrower lapels or YSL Rive Gauche huge ones. Depending on what the jacket's for, I'll go with either.

Flusser says notch lapels should cover two to three fifths of the distance to the shoulder seam, but that peak lapels may be wider to accommodate their &quot;dramatic upsweep&quot;. Â He does have a photo of Douglas Fairbanks in a suit he says goes too far in this direction, IIRC, so it is possible to overdo it. Â That jacket's lapels are similar in width to the Duke of Windsor's (as posted above)--of course, the latter is a &quot;Kent&quot;-type DB with longer roll than an SB...

My SB MTM dinner jacket has peaked lapels on the wider side as well. Â I think you have to see how it goes with your physique...if you're a beanpole, narrower lapels would look nattier.
"I love the 'Business Casual' look for the way it combines unattractive with unprofessional while diminishing neither."
-- Dilbert

I'm reviving an old thread for the sake of discussion. I recently was looking at a Z Zegna dinner jacket (apparently Zegna has extended their formalwear down to their Z Zegna line). The jacket had very narrow peaked lapels. I don't have a pic, but it was not much wider than the peaked lapels on this jacket: http://www.fuk.co.uk/node/49595.

I'm a slim fit 38R and even on me they looked too narrow in my opinion. Although I generally prefer narrower notch lapels, I like a wider peaked lapel on DJ's for the "upsweep." The ones below appear just right to my eye.

I'd be curious to hear about folks' opinions and preferences on DJ peaked lapel width (with the obvious caveat that tastes and body types differ). 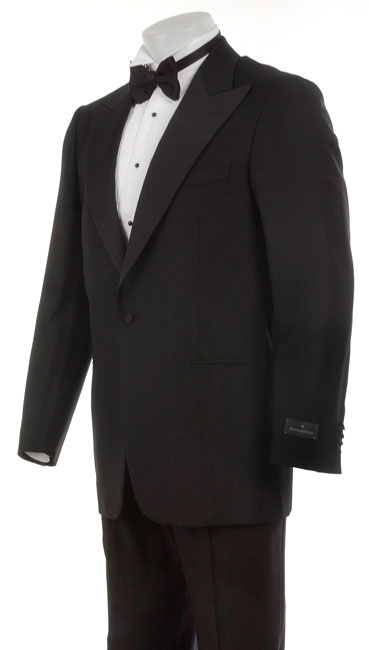 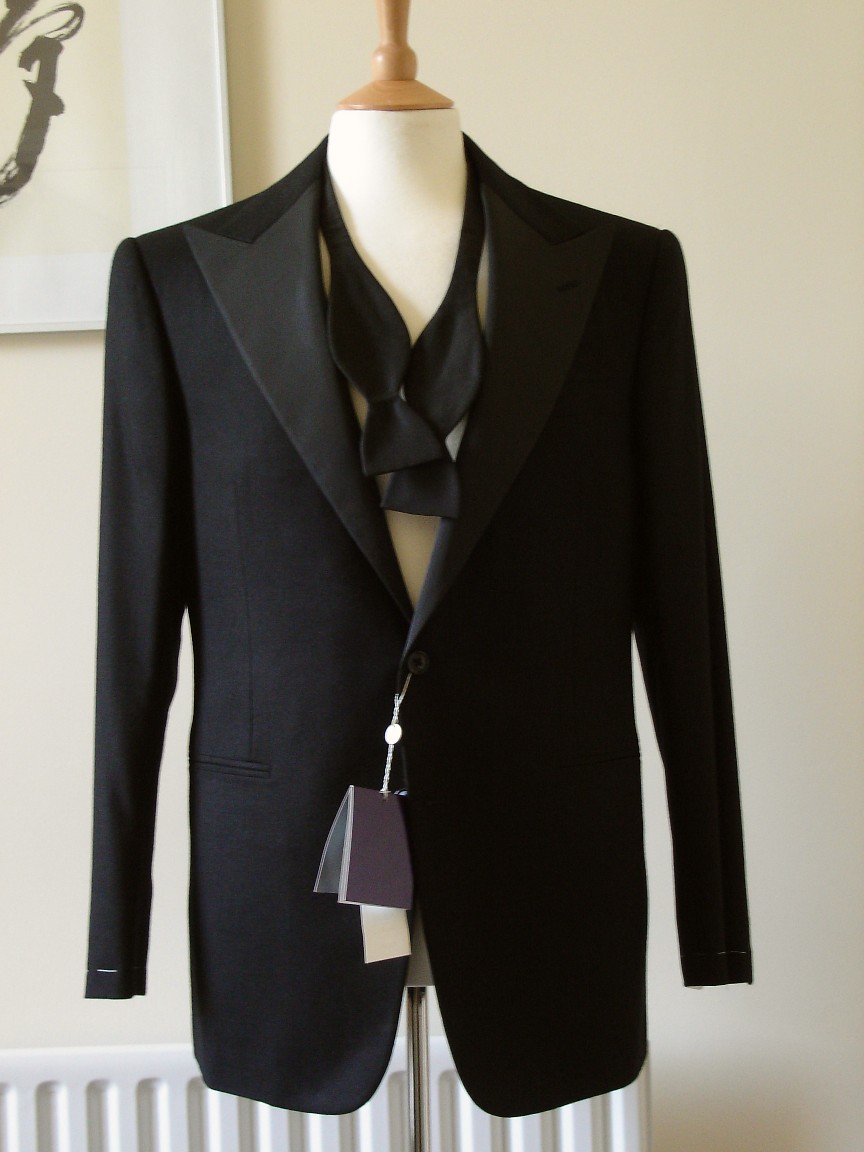 I'd wear the first type but if you're not comfortable being the guy in the '60s style suit/tuxedo, then forget it.

The first link, with the smallish lapel, just looks awful, conveying no authority, making the lapel looking like an afterthought.

I like the pictured jacket in the second link. I believe that was a tuxedo jacket by RLPL, for sale by our own Holdfast. It looks good. Not too wide, not too skinny, very authoritative.

I took a closer look at the Zegna tuxedo. Notice how a wing-collar shirt is worn. There is nothing wrong with wearing a wing-collar shirt with black tie, but notice how the wings are diminutive and are actually positioned IN FRONT of the bowtie. It's a terrible faux pas that's committed all the time.
You must log in or register to reply here.
Share:
Facebook Twitter Reddit Pinterest Tumblr WhatsApp Email Link
New posts