I have always found this pretentious. Anyone disagree? 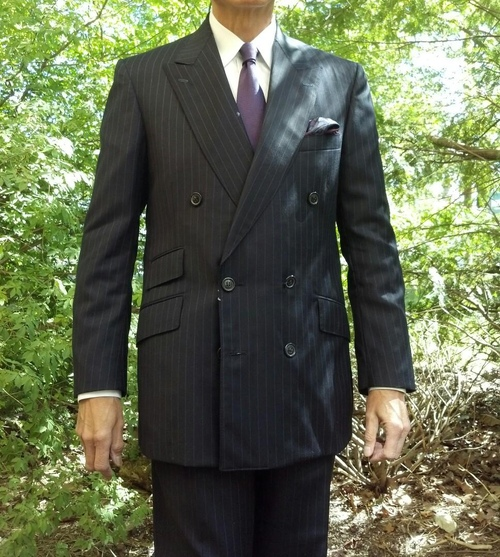 Nah. They’re ok. Pretentious is the contrast stitching on the distal buttonhole of the sleeve with the button undone.
P

I like them if you have a large drop from shoulder to waist - it can add visual interest to the waist so the drop doesn't appear so extreme.

It's all personal preference but I do find if you're a slightly larger or broader build the ticket pock helps take up some of the visual space.
C

I have most my suits with them. Here in the UK they are a part of conservative business dress.

TomTom said:
I have most my suits with them. Here in the UK they are a part of conservative business dress.
Click to expand...

funny how something thought of as an affectation in one country is considered standard in another.

paxonus said:
I have always found this pretentious. Anyone disagree?
Click to expand...

I disagree. I like them and I have one on almost all of my suits and jackets.
Vacuous Instagram brand-whoring and conspicuous consumption

Not a fan of them on suit or sports coats, they add visual bulk where you don't want bulk: right at the waist.

I love them on overcoats, because from my POV they're supposed to be bulky, I like the asymmetry and they add visual interest.
W

An anathema for me.
S

Like a lot of people, I had them added to everything when I first started getting my jackets made. Definitely a pathetic little "look at my custom suit!" flex. (This was around the same time those two fuckers who founded Indochino were going around pretending like they invented tailoring and telling us all to get ticket flaps, side tabs, and contrast lapel buttonholes, and leaving open our surgeon cuffs. Ugh.)

Once I got over that and returned to the more zen place of my clothes specifically not calling attention to me, the extra flap looked a bit excessive and I've since stopped asking for them. I did float the idea a few weeks ago for my next jacket (POW 6x2 DB) at a new tailor, more to pick his brain on the matter than anything else, and was specifically discouraged since there's already so much going on on the front of a patterned DB that an extra bell/whistle just starts making the scene chaotic, like in the OP pic. As a nod to 19th century functionality, I get the flapped hip pockets slightly slanted, which I think is a much more subtle, less potentially gaudy, historical detail.

I really like them. I'm 6'1 and there is enough space on my jackets for them to fit in nicely. Ticket pockets have also started more than one sartorial conversation as someone invariably asks what they are for. Good way to open younger folks eyes a bit on how they dress.
"Sorry to jump in, but @smittycl and _________ you are indeed talking past each other. However, only Smitty is correct."

My personal taste is that it depends how much else is going on with the suit. In a subtle, solid or solid-ish color 2B I like them and have them on a few of my jackets and think they can be done tastefully.

On any of: a sport coat, more bold pattern, DB, something with hacking pockets I’m not a fan and think it can get too busy for my taste. Like the other guys have said though it also depends how much room you’re working with on the jacket either vertical or width. If I needed to take short sizes I think I’d be more likely to pass.

I'm a big fan of the ticket pocket.