A while back I posted a thread entitled "The Great Polo Shirt Conundrum" (Available here for the curious: http://www.styleforum.net/t/337379/the-great-polo-shirt-conundrum). In it I lamented the weaknesses of the ubiquitous polo shirt, the boxy appearance, the untamable collar, etc. To that I would add the ugly elongated tail that most polos have to allow ease of tucking, see as I do prefer to wear square tailed shirts untucked.

Anyway, the first response I received in that thread was from Jonathan, founder of Vastrm, which specializes in polo shirts. Jonathan contacted via PM and asked if I would be interested in sampling one of his custom polo shirts at no charge.

Let me stop here for a second. Before I go one I would like to say that I am not affiliated with Vastrm in any way, nor was this review solicited. Jonathan clearly believed in his product and wanted to change my mind about polos.

Being a thrifter and a dedicated eBay shopper, I am always on the lookout for a bargain. Needless to say when it comes to some free, I'll take it in a heartbeat. After several emails with Jonathan I decided on the Country Club Blue polo with English spread collar and a no tuck hem (In other words, no elongated tail). Jonathan then said that he had just received some real MOP buttons which would go perfectly with this shirt.

Two weeks later the item shipped and I was provided with a tracking number. It arrived not long after with a personal note from Jonathan thanking me and hoping that I would enjoy the item. This is what I received... 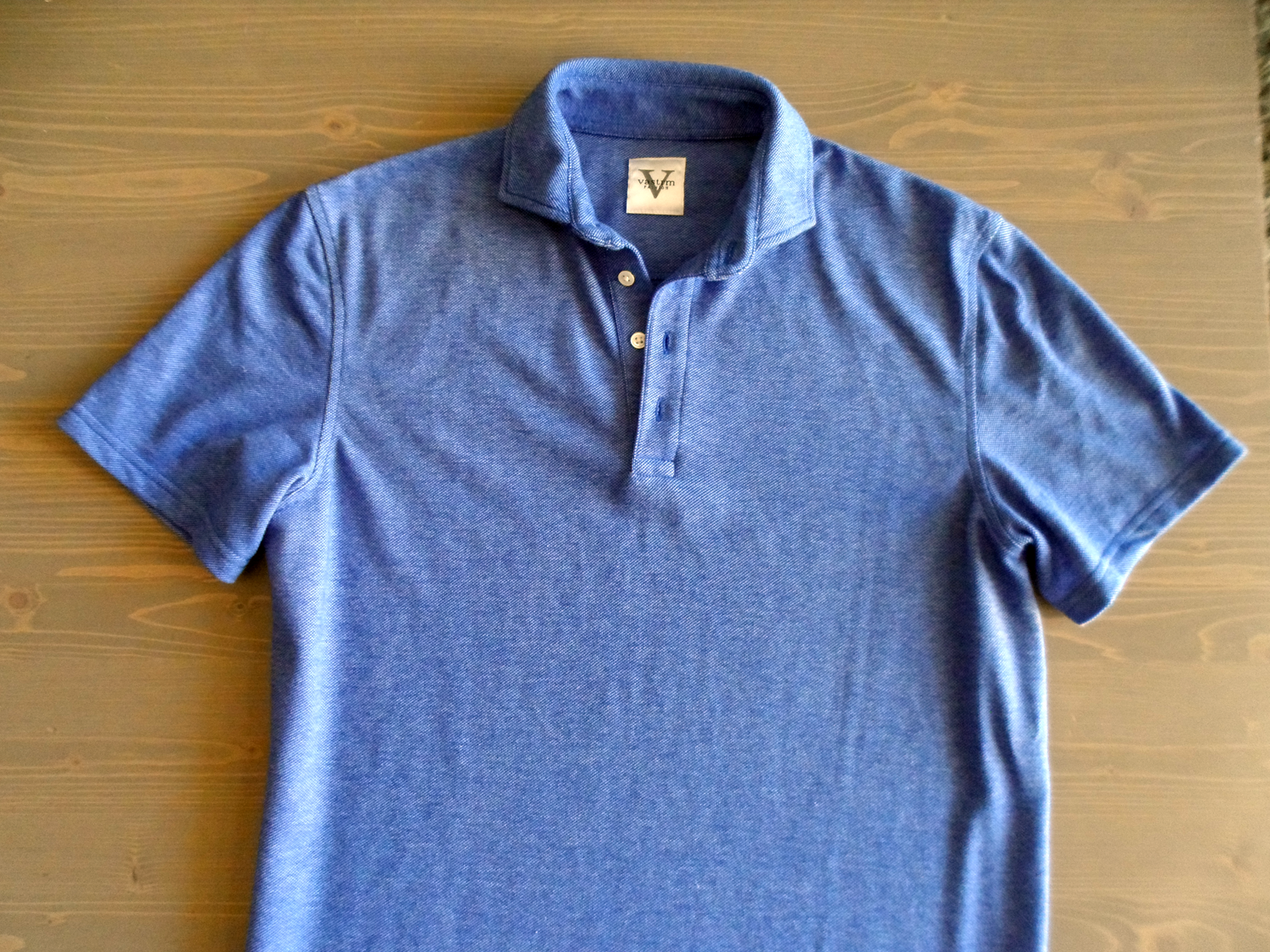 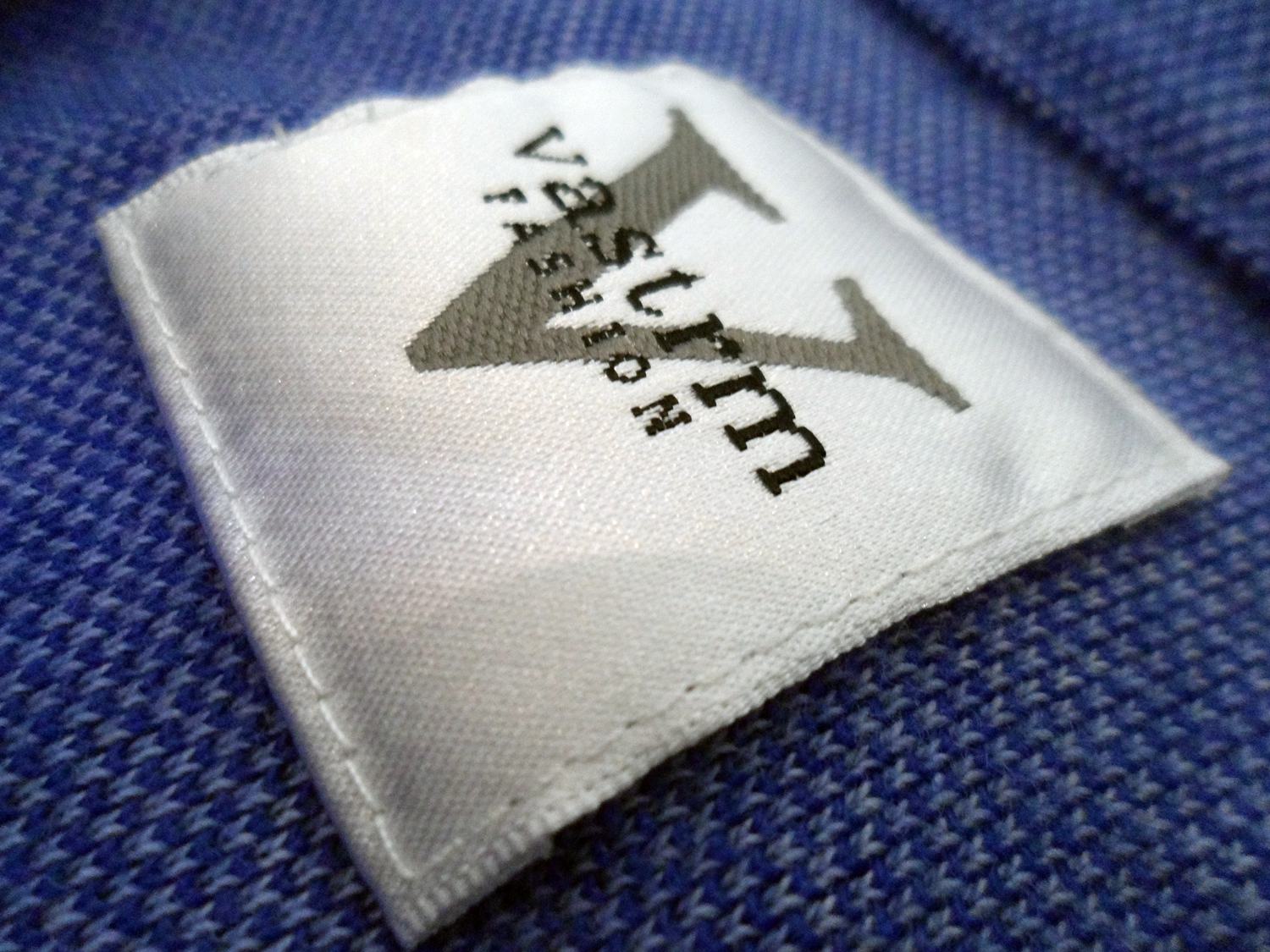 This is a detail of the afor mentioned English spread collar option. I was kind of intrigued by a spread collar on a polo (and not a little concerned), the floppy collar being one of my major peeves with polos. RL Polo generally has decent collars in my experience but the English spread collar from Vastrm answered all of my concerns. For me, it is a great solution to the problem of lumpy collars. 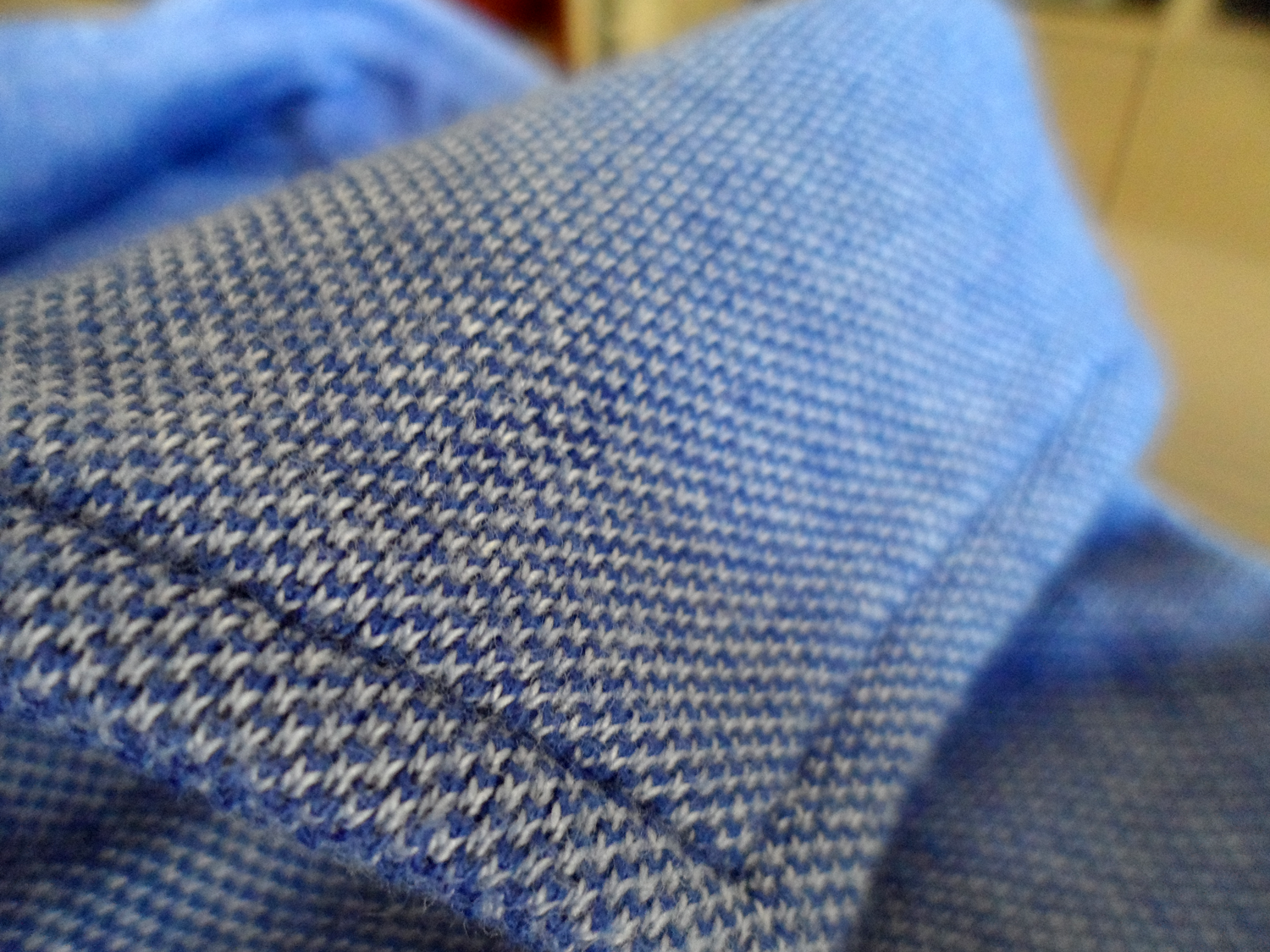 Here is a detail of the fabric itself. I can tell you this, it is incredibly soft and breathable. It may still be winter for much of the northern hemisphere, but Dubai is always varying degrees of hot, so this light weave is perfect for weather 75 degrees and above. 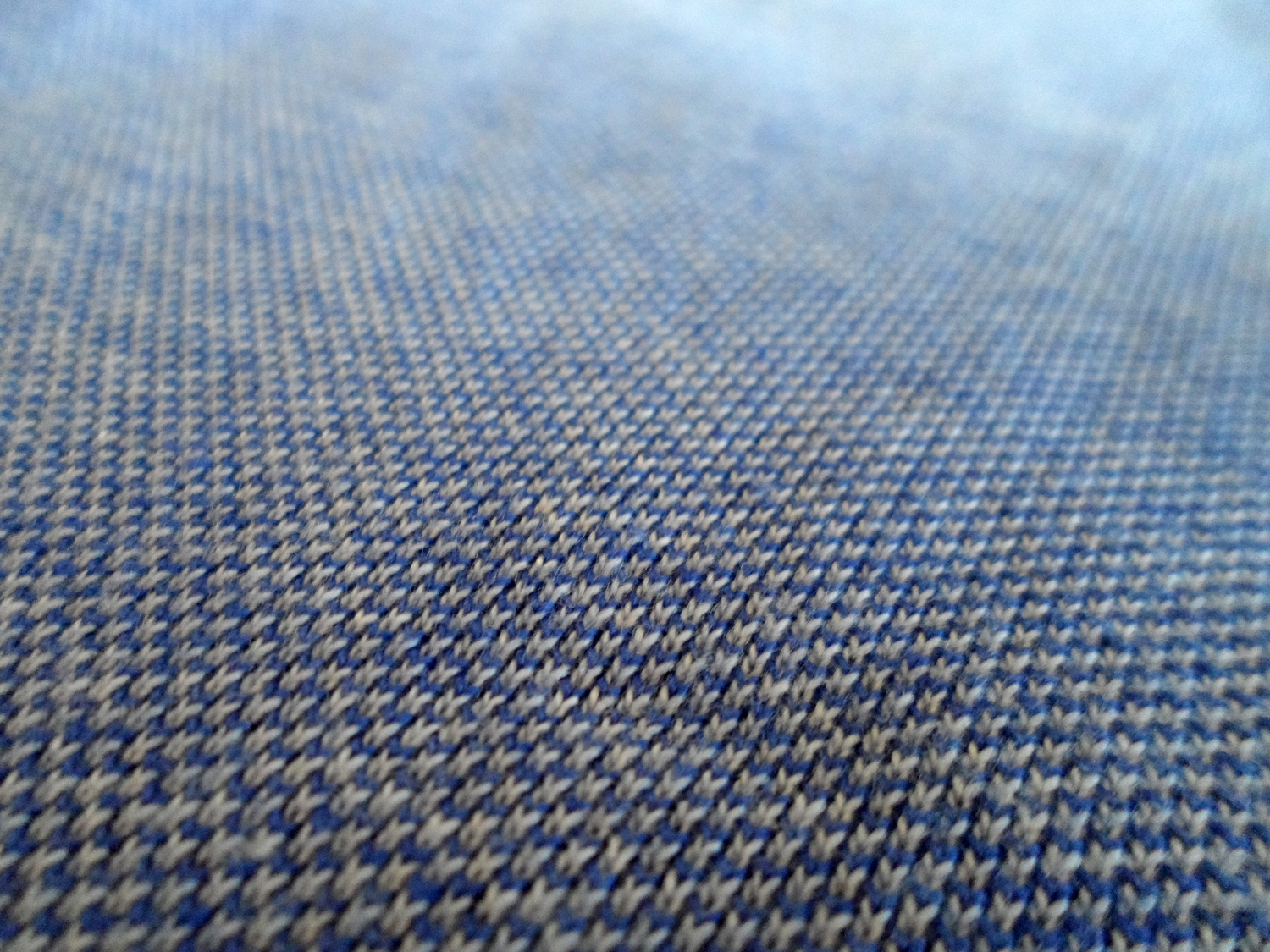 The MOP buttons are nice and thin. Often you get those thick, clunky, buttons on polos, but these are subtle and elegant to my eye. I may never wear a polo with plastic buttons again. 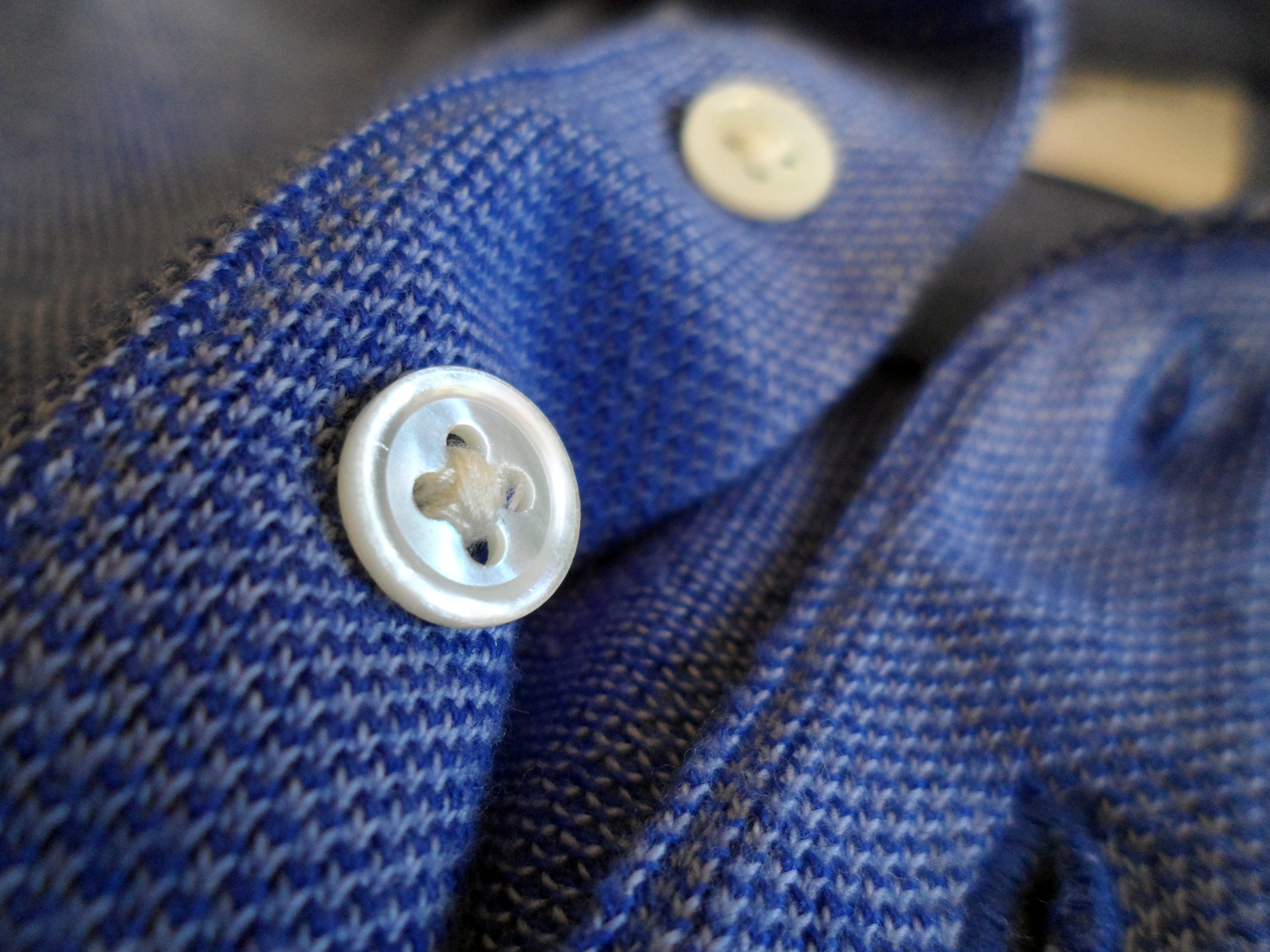 The stitching seems typical and on par with most polos I have seen. 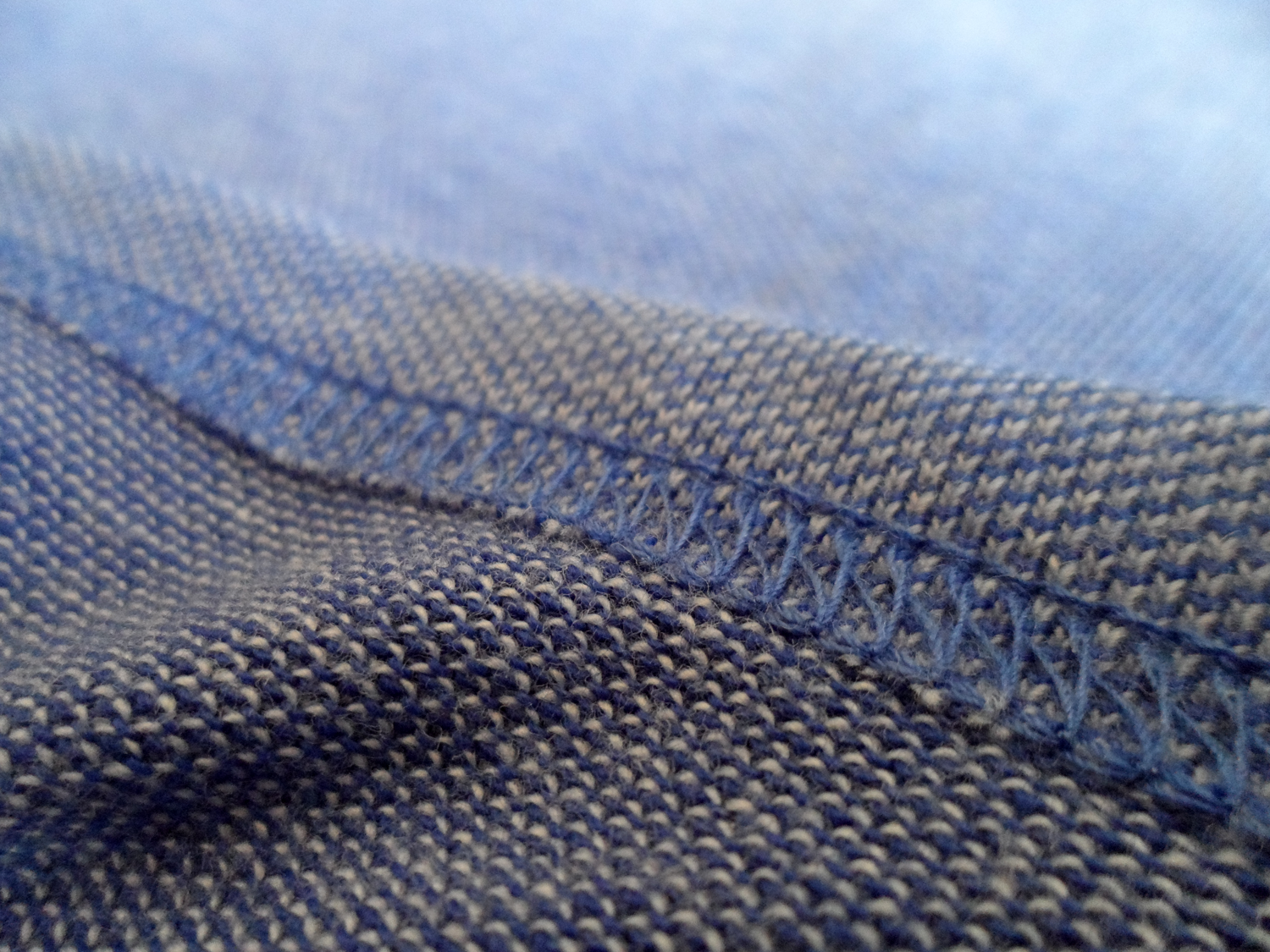 As mentioned previously, the hem is even at the bottom, eliminating that awkwardly long tail for people like me who don't tuck polos. 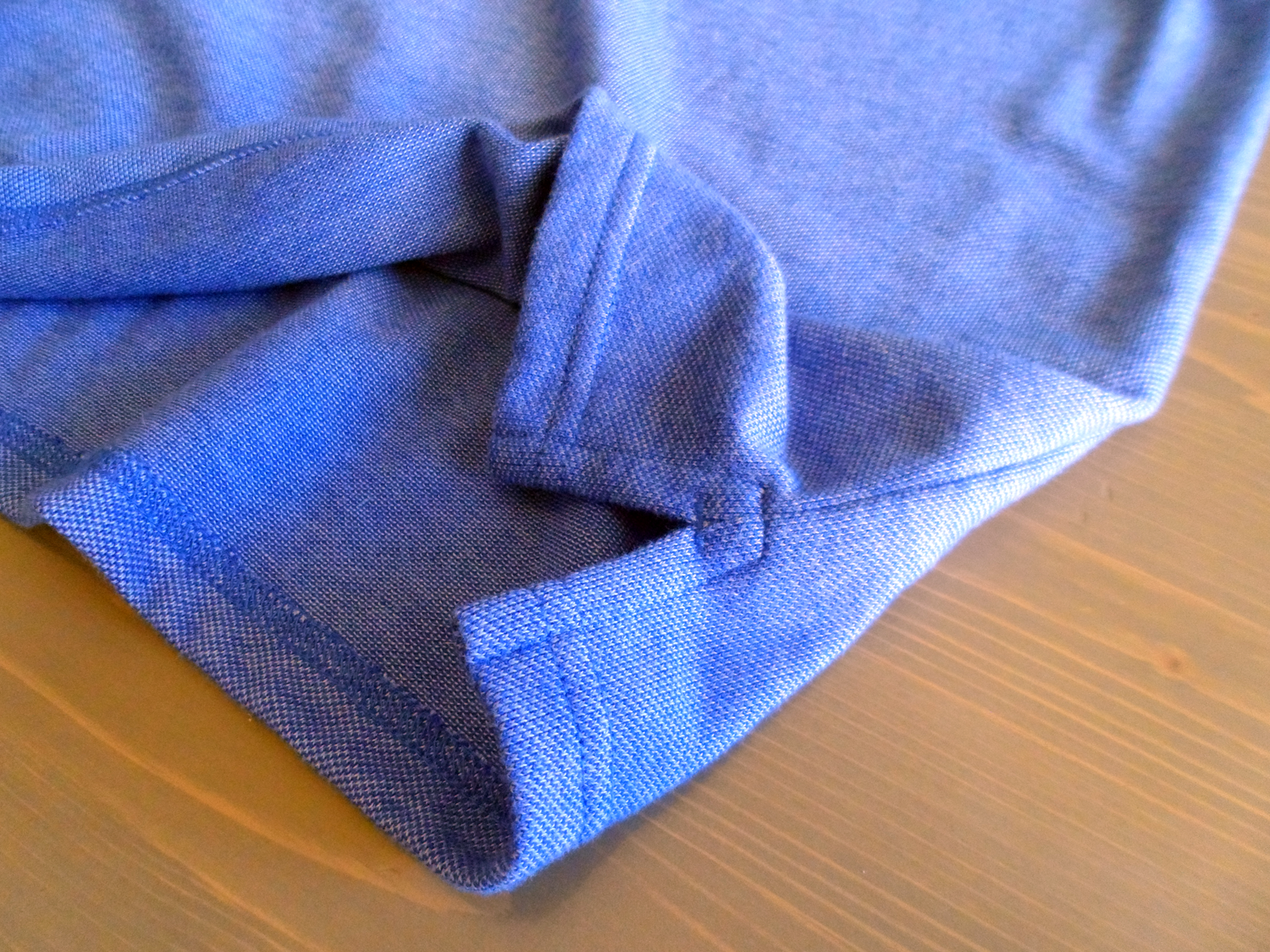 Being around 6 feet 1 inch, and fairly slim, the medium slim fit option was recommended and fits just as I like it, slim without being tight. The one criticism I would give the shirt is that the sleeves are a tad shorter than I would have preferred. Perhaps an inch longer and it would have been perfect, although with many polo sleeves reaching to my elbows in a size medium, I'd rather they be a bit short than too long. 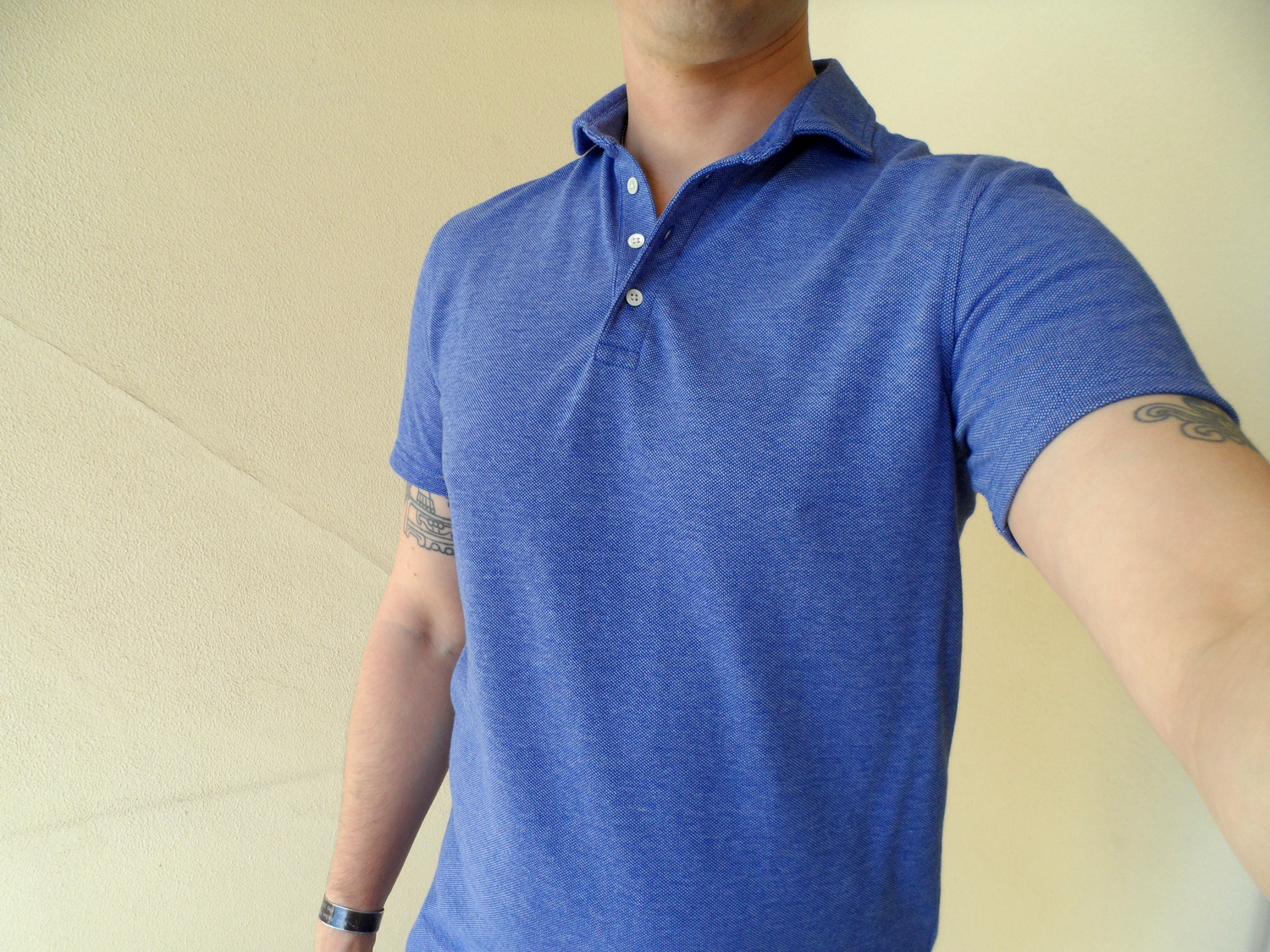 And a fit shot. 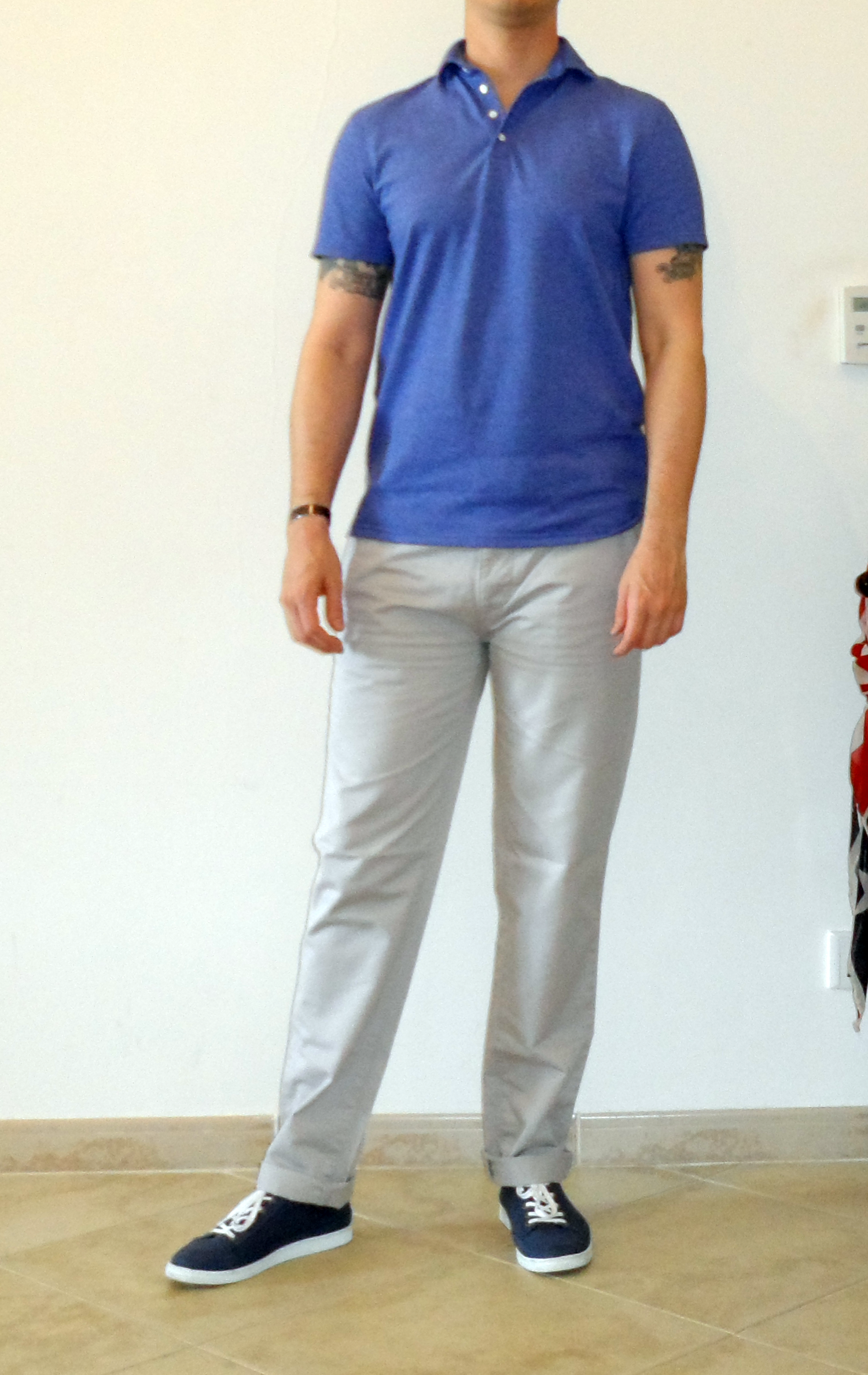 For the curious, I paired this with Topman's "skinny chino" and a pair of sneakers from SLS. 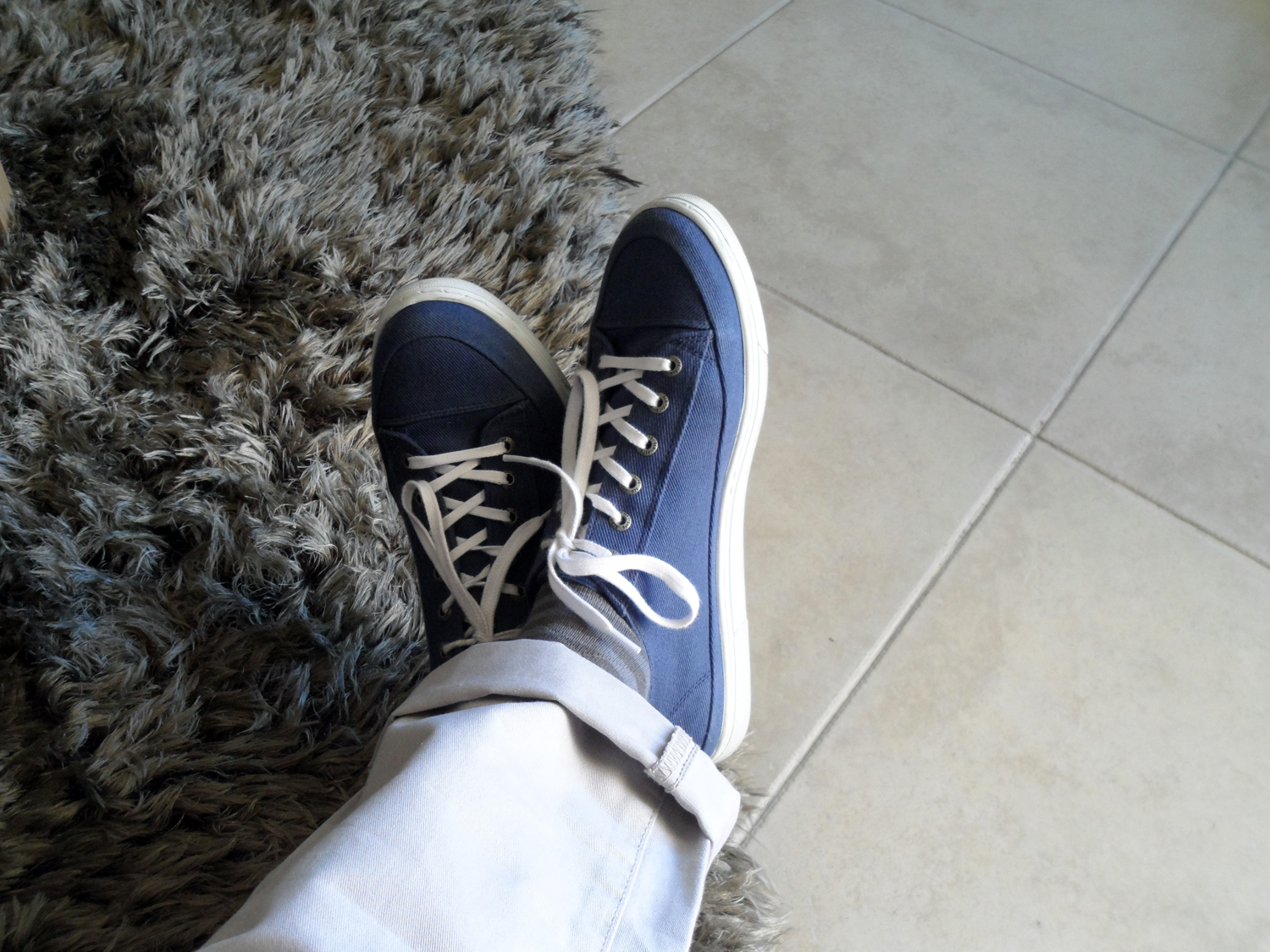 Many thanks to Jonathan for allowing me the opportunity to try out this polo. The final verdict for me is that it is a very nice piece which solves many of the issues I have had with polo shirts. Sleeves are a touch short, but the other features make up for it. Although I still don't think I can fathom wearing this polo with a blazer, as Jonathan suggested ;o), it is a very nice garment and I will, in all likelihood, be a customer of Vastrm in the future.

I am in the market for a few nice polos, and I like the look of this one... but for the sleeve length. Like you, they're too short for me. If I buy it I know I won't wear it because of that. Do you know which fit option this is? I'm hoping it's the slim fit as the sport fit has longer sleeves. I can always get the waist taken in, and large is the only size that will fit my chest and shoulders. Thanks in advance.

On a side note, I wish they offerred MOP buttons on their site. I wouldn't mind paying for them.
Last edited: Mar 28, 2013

Yes, this is the slim fit in medium.

Also, you might ask if MOP is now available. It was my understanding that they had just come in and they may not be on the site yet.
Last edited: Mar 27, 2013
https://www.instagram.com/caustic_man/

I sent them an inquiry re: sizing. None of the fits will work for me as-is, so I took a shot. Thanks for the quick reply.

Actually, if it's not too much trouble, would you mind sharing your chest, shoulder, and arm length measurements? It would be nice to have a reference for the pics.
Last edited: Mar 27, 2013

The measurements Jonathan used to get my size were as follows...

jtang108 said:
We rec'd your inquiry online. I will respond separately to that! We can absolutely lengthen the sleeves and we can certainly take in and taper the waist to capture your athletic cut. MOP buttons are in! We will add them to the site shortly, but meanwhile, let's touch base offline and we can work on a special order for you! Looking forward to it.
Click to expand...

jtang108 said:
Greatly appreciate the thorough review! For your next shirt, we can absolutely lengthen the sleeves on that slim fit. Let us know how much you think you need. We can increment by .5". So 1.5" or 2", might work for you?

Other adjustments we can make, tapering waist, broadening shoulders, decreasing sleeve diameter, etc... Since we are making each shirt one at a time, all adjustments are possible! We will make these options clearer when we relaunch our website next month!

Somehow I had a feeling you'd be able to make any adjustments. You'll be hearing from me after I move back to the states for an order for sure!
https://www.instagram.com/caustic_man/

I'm liking the polos, not so sure about the 5 button collar, I prefer 2-3, but I personally like the fit and sleeve length. Does the collar stand up well like KW's?

Is there a website? Other fabric options? (liking this blue though) Pricepoint?

Looks pretty good. Will contact you shortly to try a shirt or two.

allysan1027 said:
maybe a couple inches longer on the sleeves to cover those terrible tattoos
Click to expand...

I usually try to keep them covered in public, but you have no idea how awesome they are.
https://www.instagram.com/caustic_man/

this is pretty interesting...so basically this is a MTO polo shirt operation? i like the options although they kind of make me dizzy.

i might be the only one so far who likes the shorter sleeve. my favorite/best fitting polo is a Casino Royale Sunspel that has shorter sleeve lengths...i recently bought a couple more of these and was very disappointed about how poor the quality and fit have become since they moved production to Turkey, so i'm kind of looking for something that would approximate the original shirt (the made in England version produced around 2006-2007)

Caustic Man's fit looks pretty good except i would taper the sides a bit and i would prefer the collar to be different from that soft spread thingy. is that possible?
..

1) will the polos shrink if washed / dried?

Check Out this article in Business Bee