Good question. One Rtc should head down to the Mazda parts desk and ask. Just for fun.
But i think he wants stronger than stock. Please buy quality parts. Even if it takes longer.

That was one of the great things about the heyday of the air cooled VW. Tons of available affordable upgraded engines built by crazy geniuses . At least in California anyway.
One of the annoying things about believing in free will and individual responsibility is the difficulty of finding somebody to blame your problems on. And when you do find somebody, it's remarkable how often his picture turns up on your driver's license.----- PJ O'Rourke

Thrift Vader said:
Good question. One Rtc should head down to the Mazda parts desk and ask. Just for fun.
But i think he wants stronger than stock. Please buy quality parts. Even if it takes longer.
Click to expand...

I mean, there are already some pretty hard limits in place. Stock miata 5 speed transmissions are 200-300 bucks used, but I don't want to have to go through them. 250hp in a car this light is plenty. The bottom end and transmission can handle that much power (about 220 rwtq) and it's pretty solid.

The rods are the limiting factor if you try going over that so some people build up the engine for longevity by dropping rods and pistons in since the stock rods are weak. Pistons are stronger but people like added protection.

Cheap ebay rods are strong up to 300ish hp. They cost 225 or so. Name brand rods are about 350 or so. At that point, I'd rather just buy the name brand ones since I'd want to weigh the rods and make sure they're within spec for the cheaper one. If a machine shop did it for 25 bucks I'd consider it. Realistically I think it's going to cost more than that.

Again, the goals are to get this working for now. I'd like to do engine work over the following winter when I upgrade and add other stuff (exhaust? etc). At this point it looks like I'm going to end up spending 2500-3500 over what I've spent already on the car and differential/clutch etc. Total build is going to end up in the 7-8k range all said and done. That's without wheels etc.

Honestly, I can see why people buy other people's project cars.... A local one is selling for about 6k with everything done probably putting 220 or so to the wheels.

There are also plenty of ways to do this cheap. The used turbo setup i'm buying is likely overkill, but it's all there and it's going to be dank. You can get a cast manifold for 130 bucks, a turbo for 100, etc etc etc. People do this all for under 2k with an ecu. They make a bit less power and pushing the setup means the manifold will eventually crack, but if you run 8, maybe 10 psi, then you're likely find even with those cheaper setups. Lots of people have tested them and reported on them.

I'm also going to be paying about a grand for the ecu which is insane to me, but it's going to be beautiful and will let me run boost by gear and shit like that. There's another option of either waiting for a used one or buying one that popped up for 700, but that one had issues in the past but was repaired by the company that makes them. I spoke to the owner of the ecu company and he said he did the work etc. I just didn't want to have to question such an important piece of the equation.

I can run rx8 injectors and I might... but I can build a set of injectors for 60 bucks more with more flow and better idle so why not?

A vvt head just popped up locally and apparently the swap requires the bolts for the head and splicing two wires into my old ecu cables and into the aftermarket ecu. Supposed to up the low end torque substantially.

Really, buying the name brand. Or simply seeking out the best parts is not for Hp's sake. But for peace of mind. And hopefully longevity. I understand a few Japanese companies make piston and rod kits for your engine. Bp/6 right?
Toda would be the first place i look for 4banger block parts. : http://www.todaracing.com
-Confucious(Vader) says: a dollar spent on quality, is a dollar saved on replacement"

Question, if you had a spare engine stripped down, why not have it crack tested? Balance the Crank? Dip the block to clean it properly, mask it up and paint it, ready for your goodies to go in? Have your head ported and polished? Rebuild the head with stronger valve springs to hold boost. Re-seat the valves. And run a thicker metal headgasket to lower compression to run higher boost? Haha, maybe even bore out your cylinders to around 2 liters?? Most of these processes are not expensive. Especially on a small engine. With a single head. And the processes themselves you might really enjoy seeing done. Not to mention how glorious your little 4banger will run on boost. The vvti head is moot. If you run an ecu. And adjustable pulleys. For dat fine tune. Just machining the stock head should yield more power than swapping it would do. Older guys might remember all the tricks to eek bits of power from an older engine. They still work as well as ever.

Lastly, Can i custom paint your rocker cover?

I did a thing. 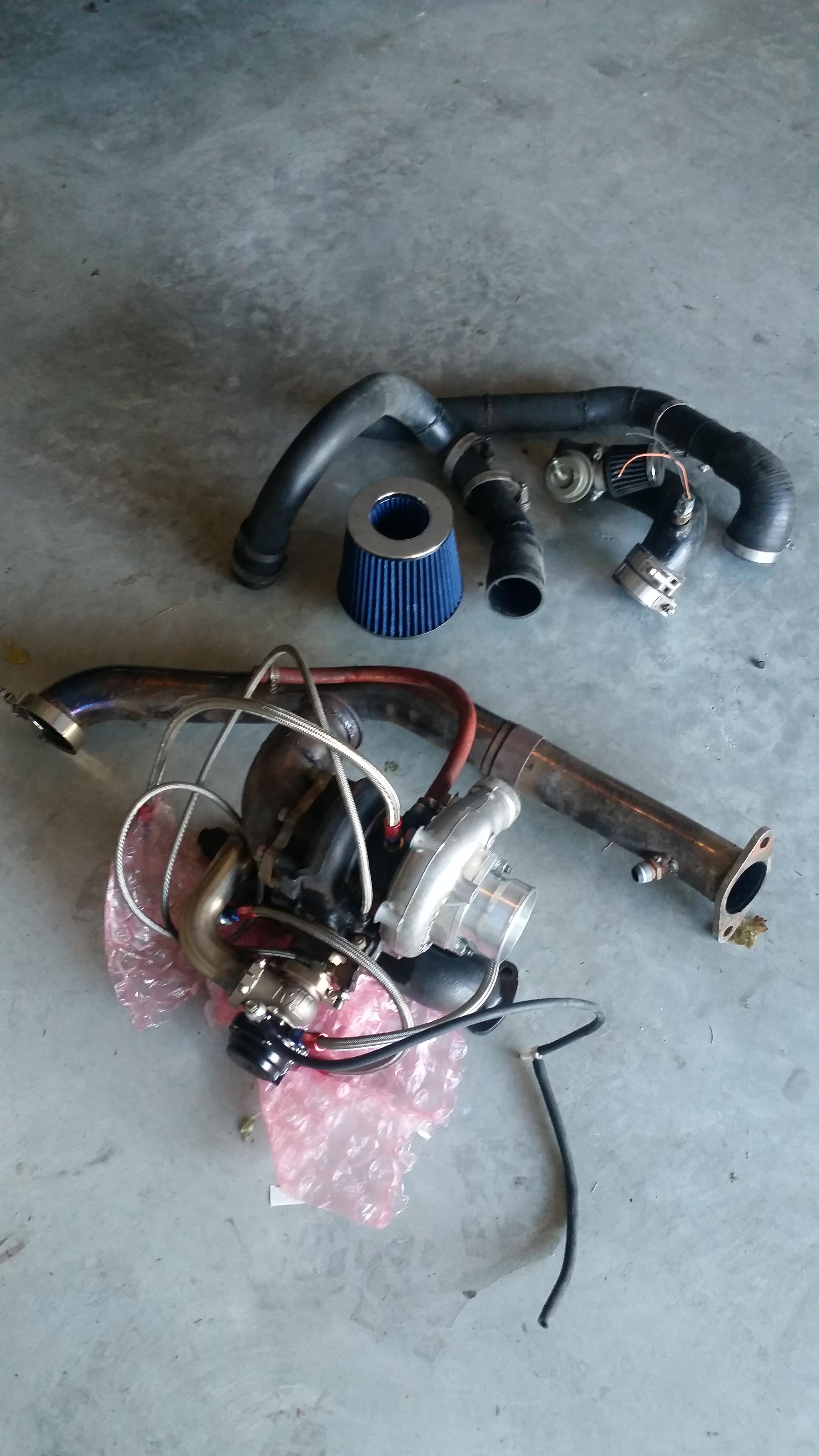 I haven't been on here in a long time. I have been swamped with my real job. But, I had two things.

One, I finally got around to listing my BMW for sale. Here is the listing:

Also, I had a guy contact me about the car. He was asking all these detailed questions and really texting me alot. We agree to meet at my office and he pulls up in this: 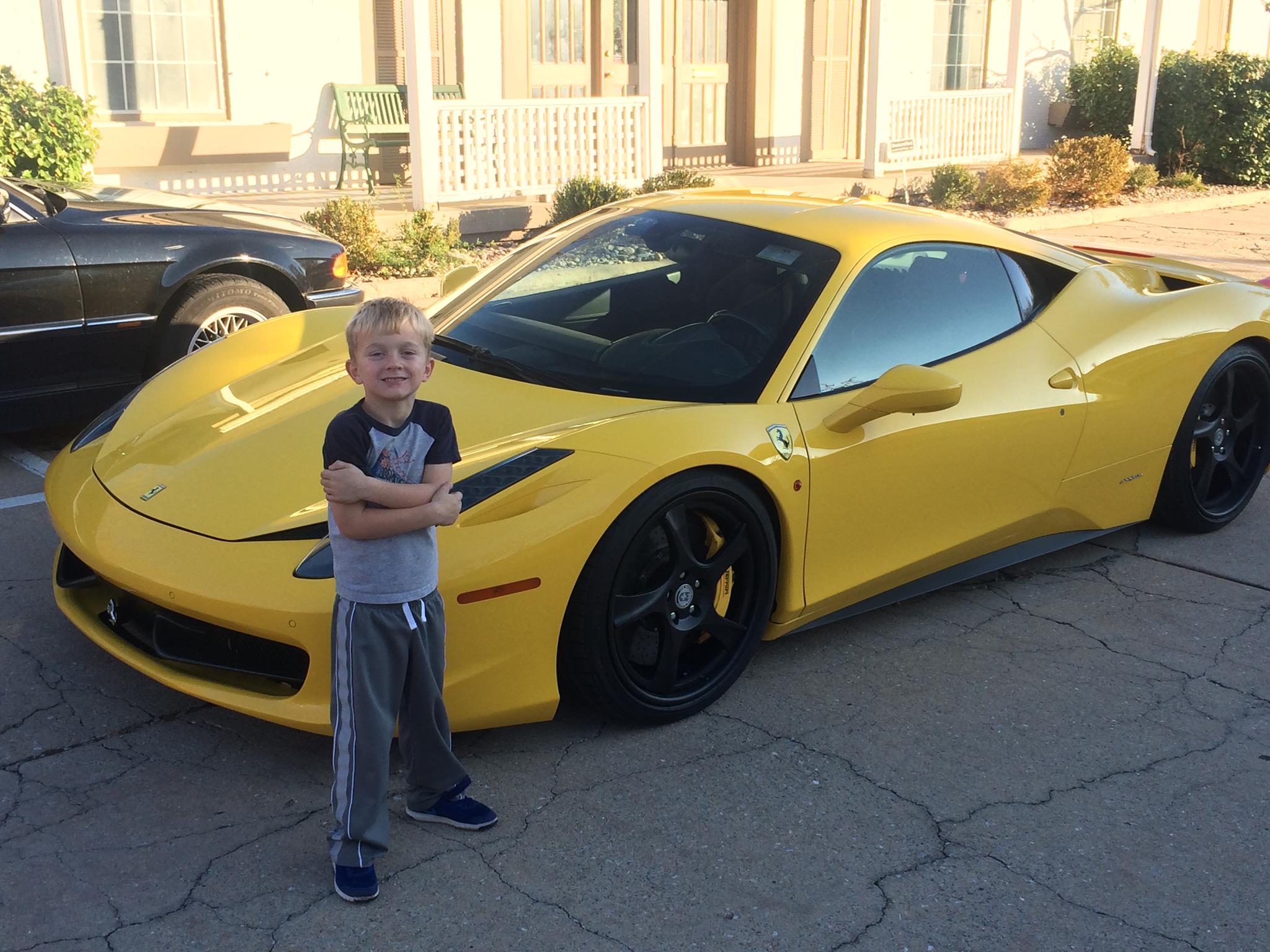 I had to take a picture and my 5 year old son said he wanted to be in the picture.

I was telling the guy who works on my car about it and he said he knew the guy. Just a few months ago, they put tires and wheels on it -- for $15,000!

When he pulled up in this, I asked him, if you drive this, why would you want my car? He said he needed a winter car for his son. Must be nice.
Always interested in nice conservative suits: Oxxford, Brooks Brothers, Cremeiux 48L and Shoes 10.5-11 shoes (C or D width). I love law related things as well as politics, some sports stuff (Washington Redskins, Missouri Tigers, St. Louis Cardinals) and vintage CAR STUFF (BMW, Lincoln, Cadillac and Vintage). 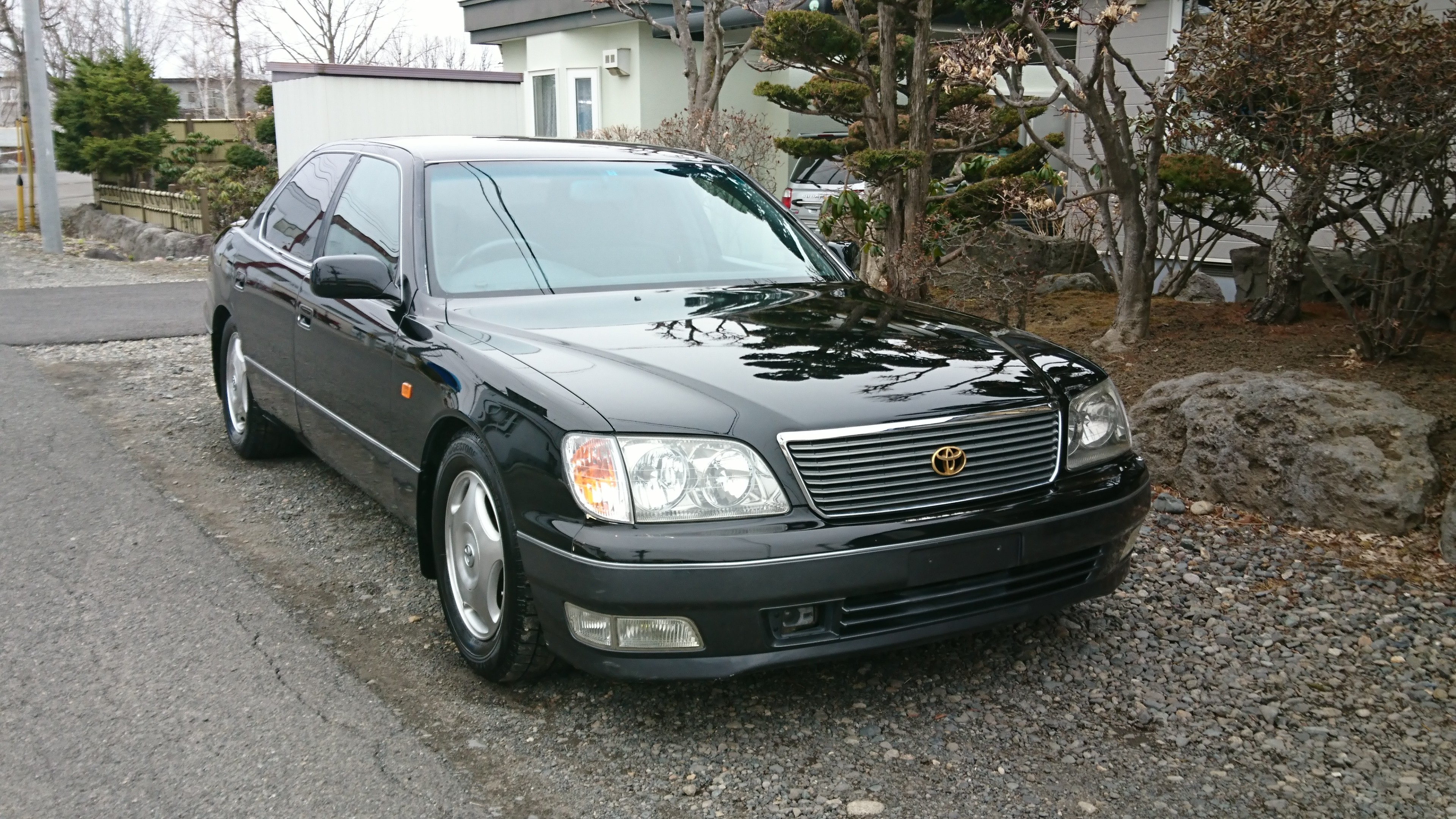 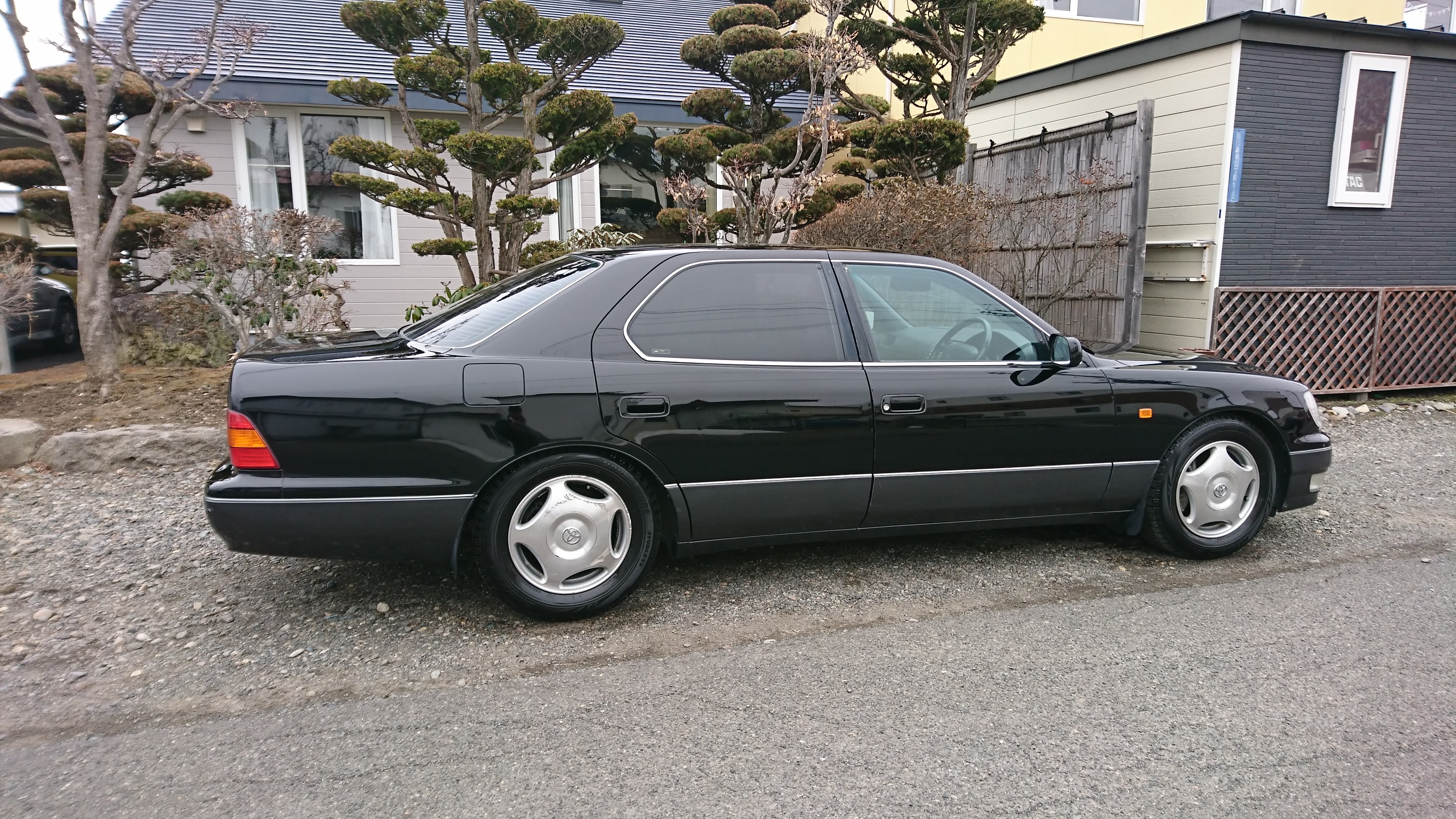 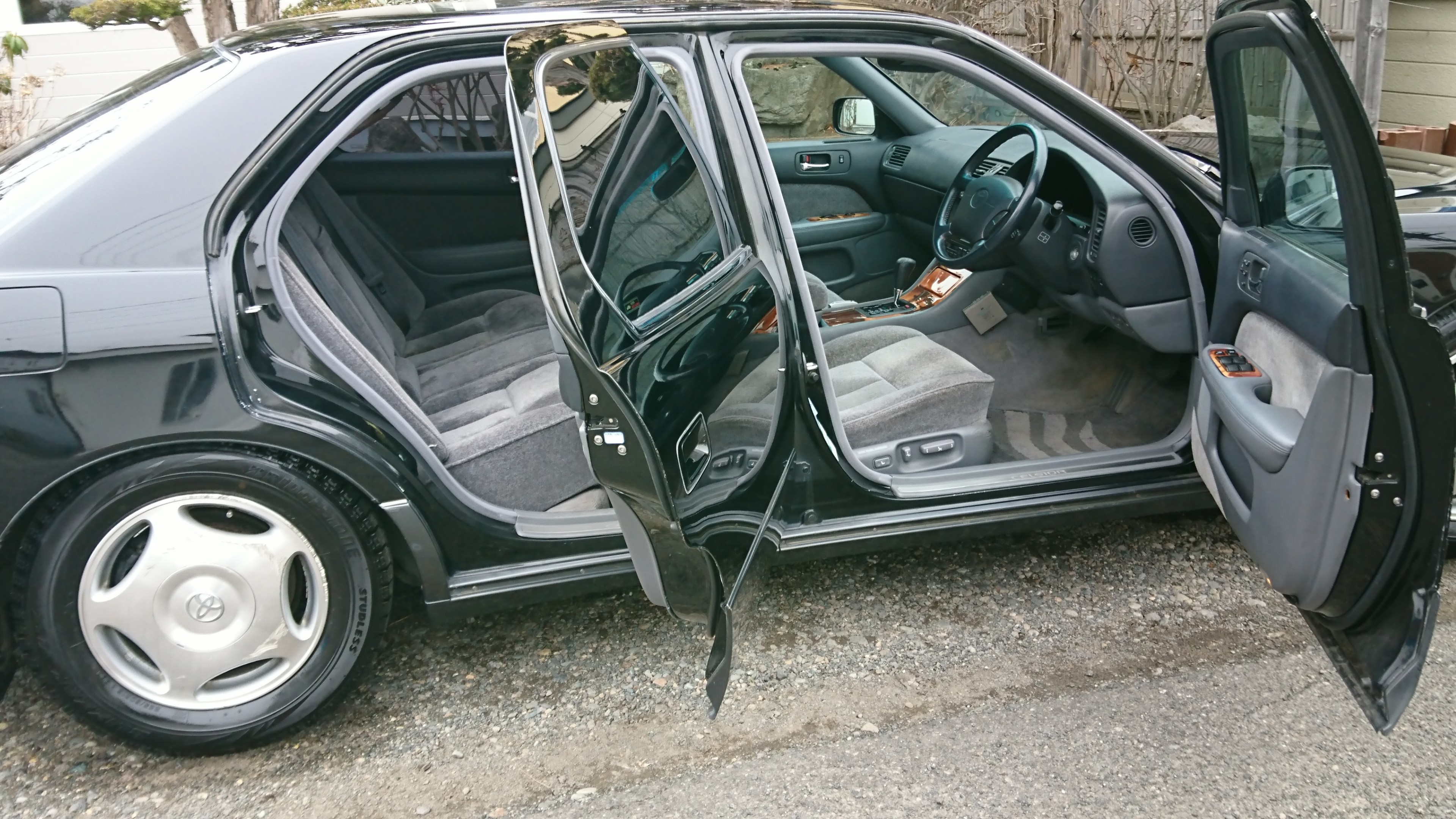 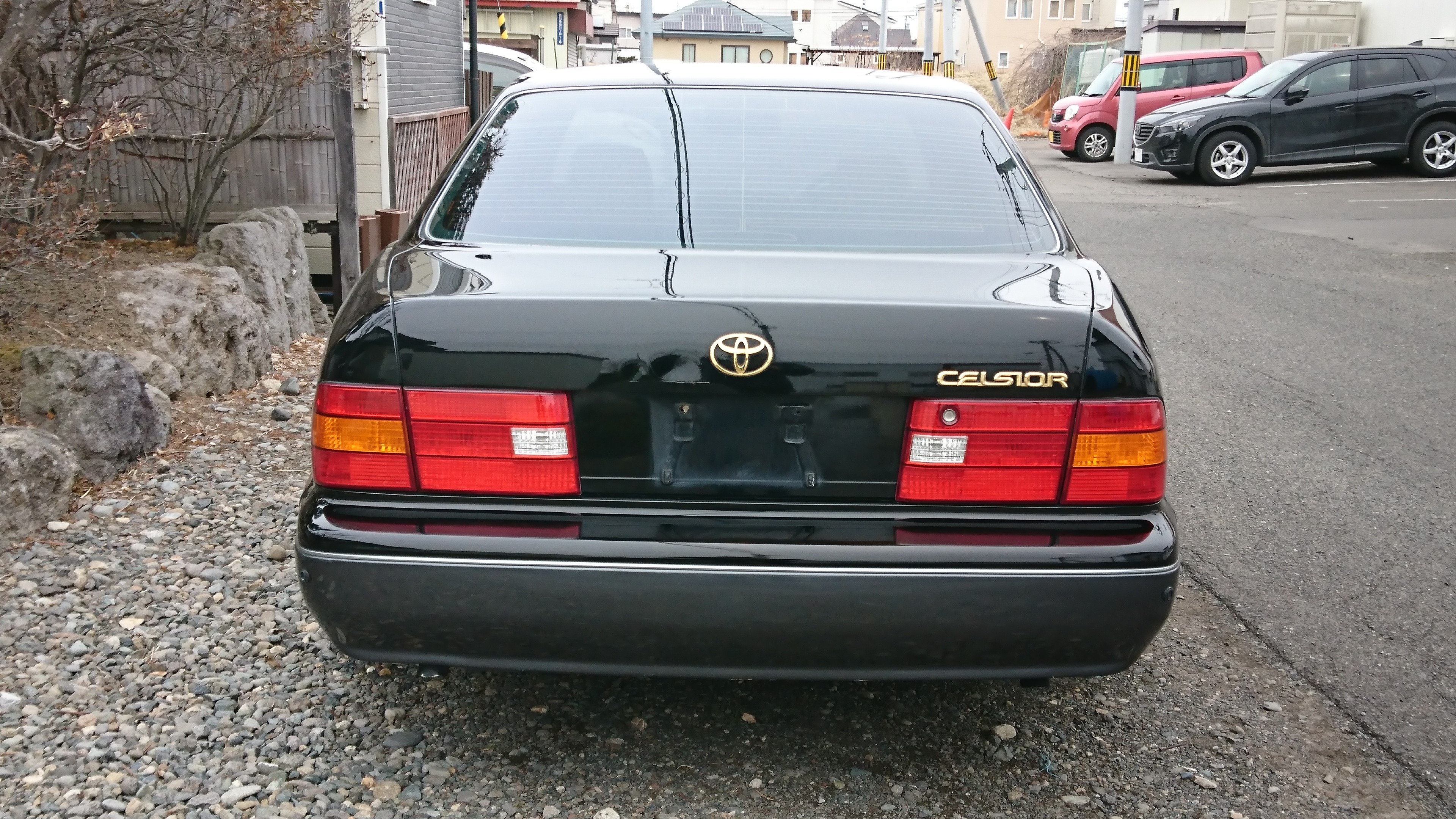 I got all the tools i need. stay tuned.

What engine is it currently and what engine/engine mods are you planning?

Numbernine said:
Oh I was just reading that post about rebuilding the lower end and wondering if they still sold them . Cars have changed tremendously since I worked on them but that was always an option for a guy who lacked the set up and tools to do a complete engine overhaul
Click to expand...

I finally understand what you're asking now lol.

They still do this. It's just very very expensive. See here: http://www.trackspeedengineering.com/Engine/trackspeed-custom-built-engines.html

I was asking because my goals can be met with just forged rods. I don't want to go too crazy with things. Doing pistons etc adds a ton of money to a build.

jcman311 said:
What engine is it currently and what engine/engine mods are you planning?
Click to expand...

Currently, the car is stock. with the exception of a air suspension height controller.

Not sure if i will mod the engine. as it is bulletproof if left alone.

- Noise from the steering column when it lowers. annoying A.F.
-some "Detailer" burned paint off all the edges. making the car a 20 footer.
-neglect, 20 years worth of dings. and scratches.
-one door has been replaced. can tell by the shine.
-rust on the exhaust shields.
-spongy brakes.

I plan to repaint it. even if a simple tape up job. remove the lights/handles, and mask it. had the idea to do a piano black, with a heavy Black metal flake, and deep clear. Buff it like a Telescope mirror. Dark as the Universe. with the glitter of the stars. = "The Darkness". hehe.

inside? White Lace half seat covers (Hard to find) beefed up audio. otherwise stock. (need to repair the steering column)

underneath? I plan to make the exhaust myself. Stainless Straight pipes. (Glass pack mufflers?) beef the brakes. and refurbish the Air suspension if possible.

working near Tokyo for 6 months on trucks gave me a closet love for the "Decotora" scene. so i will need to find a way to pay Homage to the Decotora scene, while keeping it subtle. therein lies the challenge. add influence from the Drift scene, VIP Scene, and the Street race Scene the mission is to take something from all scenes, and create something unique.

OK here is the first fix on The Darkness:

The Telescopic steering column.
It is a common problem with Celsior's / LS400's. The column won't go down when you put the key in, or makes an ugly noise, then goes down. before refusing to comply. here is how to fix it.

1.remove the cover. (2 screws. one each side of the steering wheel when you turn it. and 1 screw under the cover) + driver. 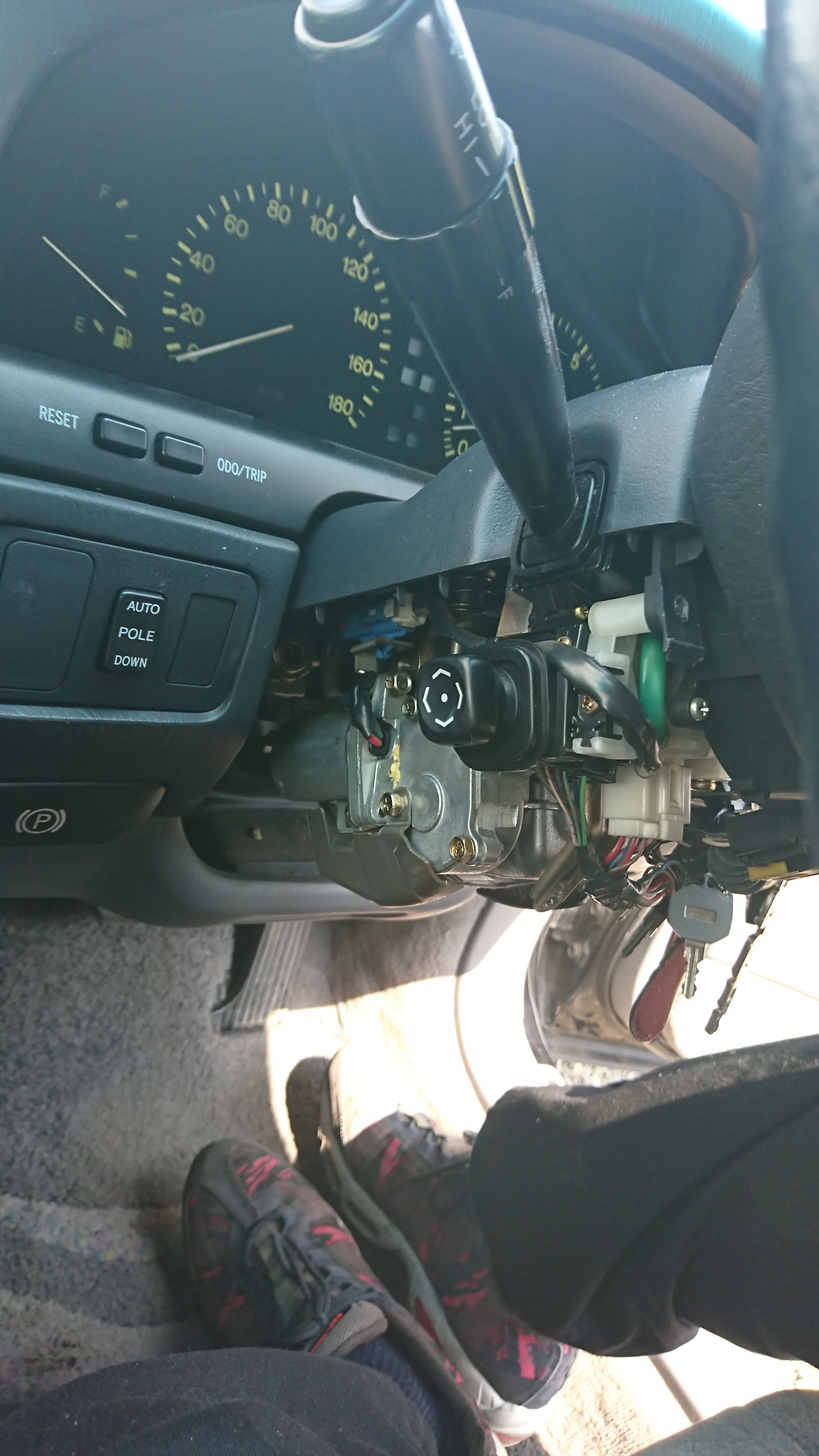 on the left side, there is a cover with 3x 8mm screws . and a bracket. remove them. and the screw connected to the bracket. (bracket mout screw is 10mm) 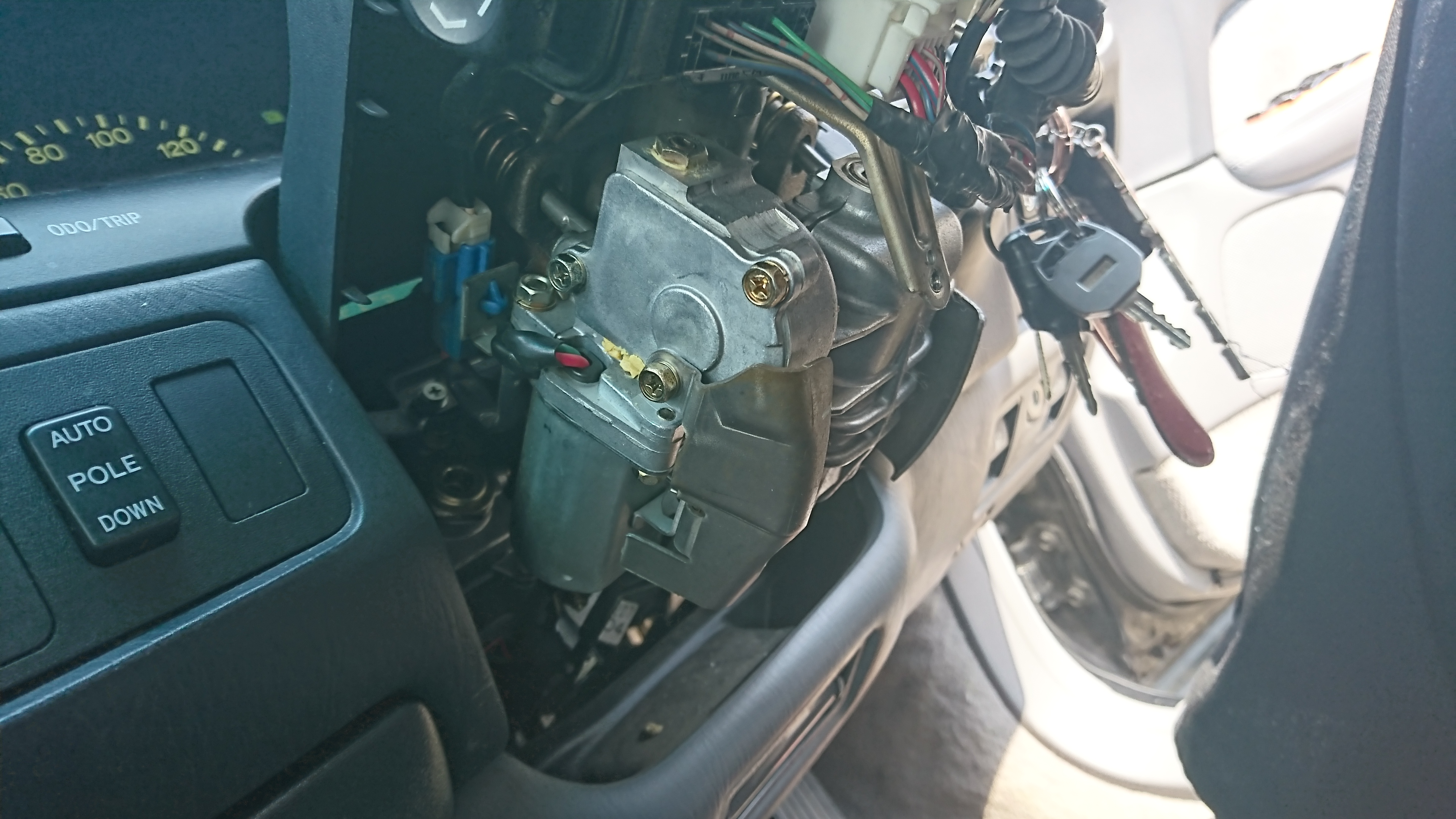 to reveal this blue wheel. and a worm screw gear. the nylon washers on each side wear away over time. causing the blue wheel to wobble, and not engage with the worm screw. meaning it doesn't work. 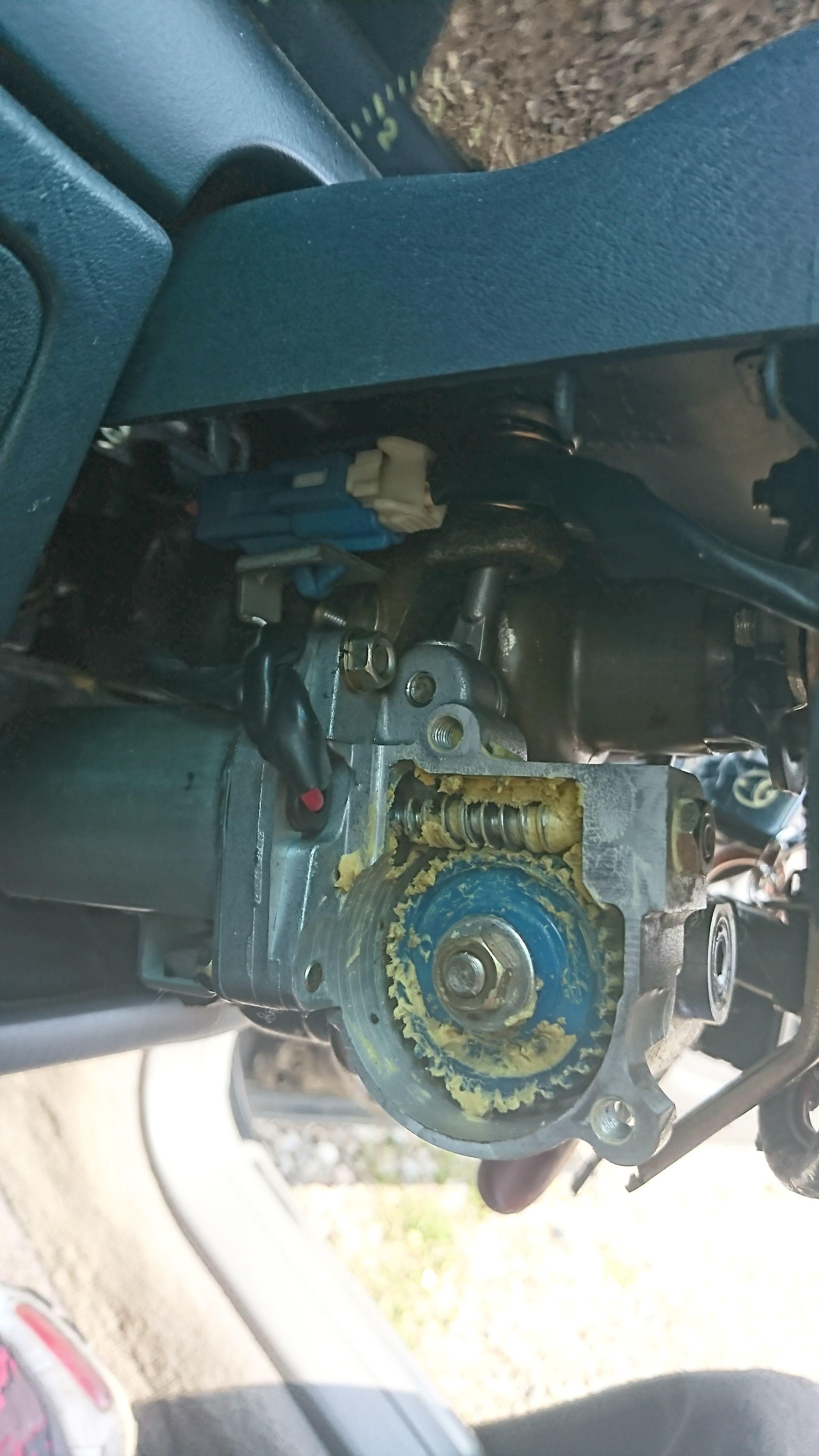 Grab some hair pins from the lady in your life..... (i only needed one)

remove the 10mm nut and washer on the gear, bend the hair pin(s) into a hook with some pliers. hook the gear, and jiggle it out. 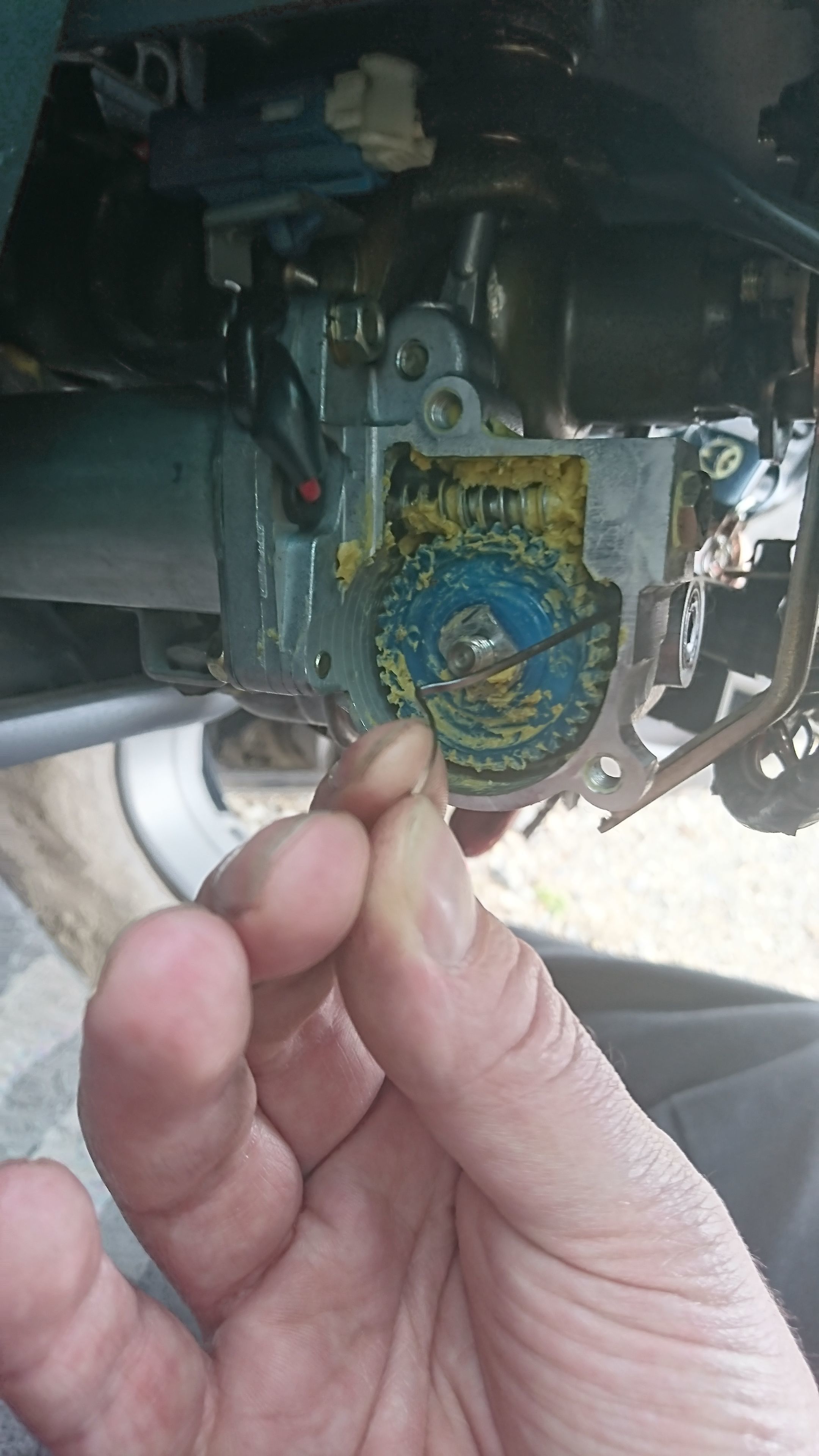 use a screwdriver and a rag to clean out the crap from the long gone washers. 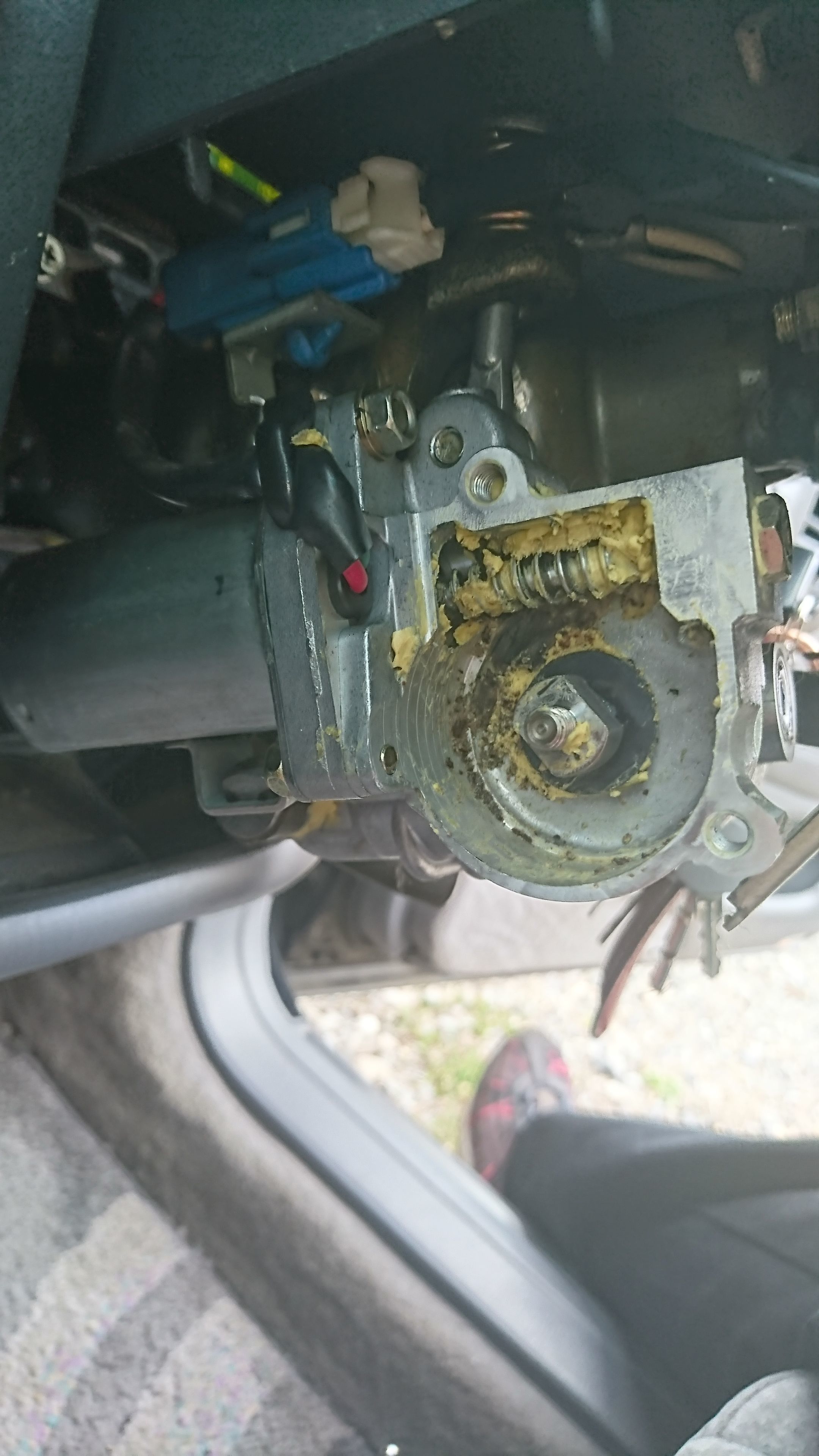 head to the hardware store, with the blue wheel. find some nylon tap washers that will fit. (these cost 131 yen. sooo, $1?) 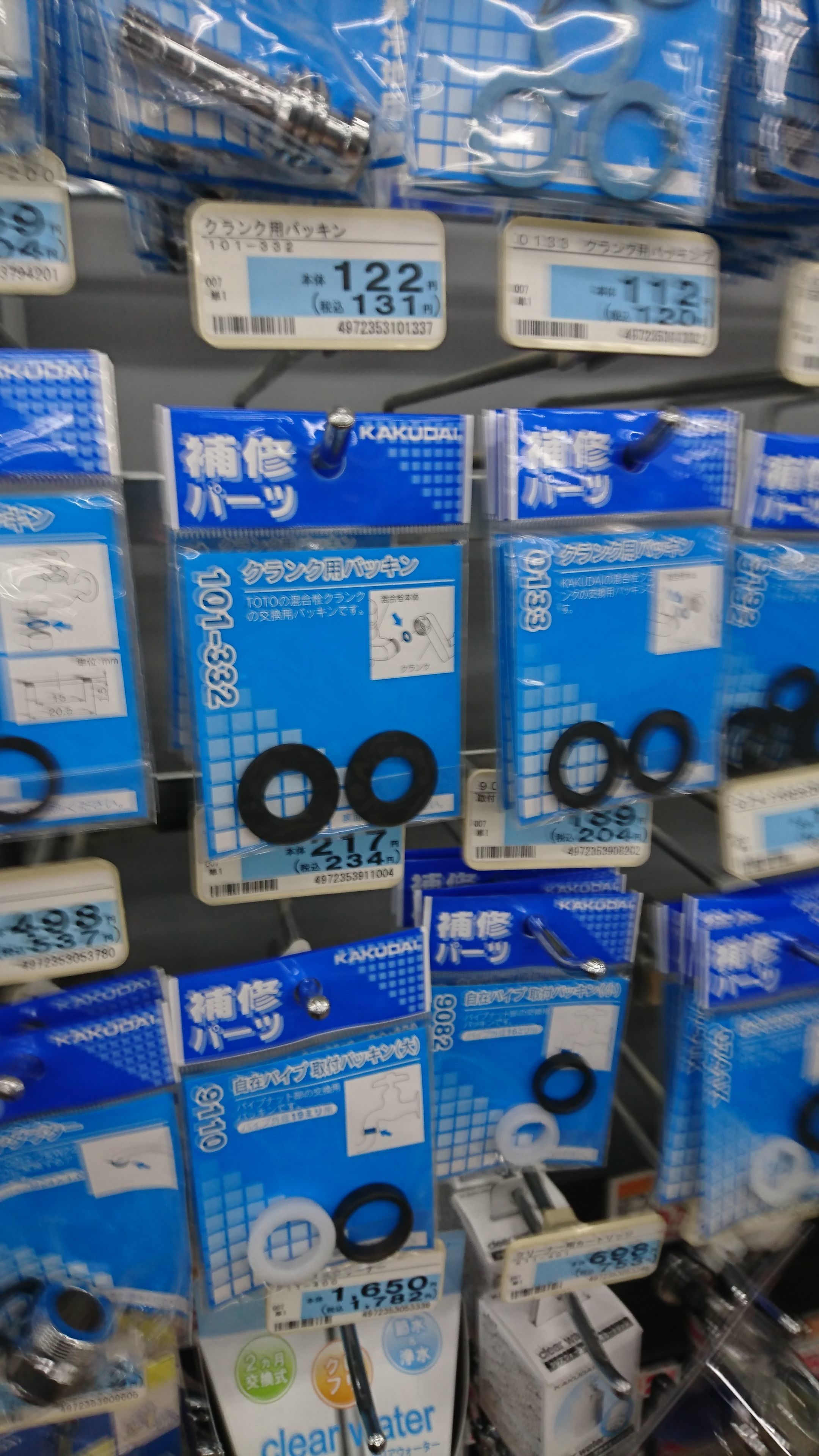 put some grease in the casing, then on a washer, slip it on, grease the gear, install it, add another greased washer to keep it centered (glad it was a 2-pack)
and put the metal washer/ 10mm nut back on. 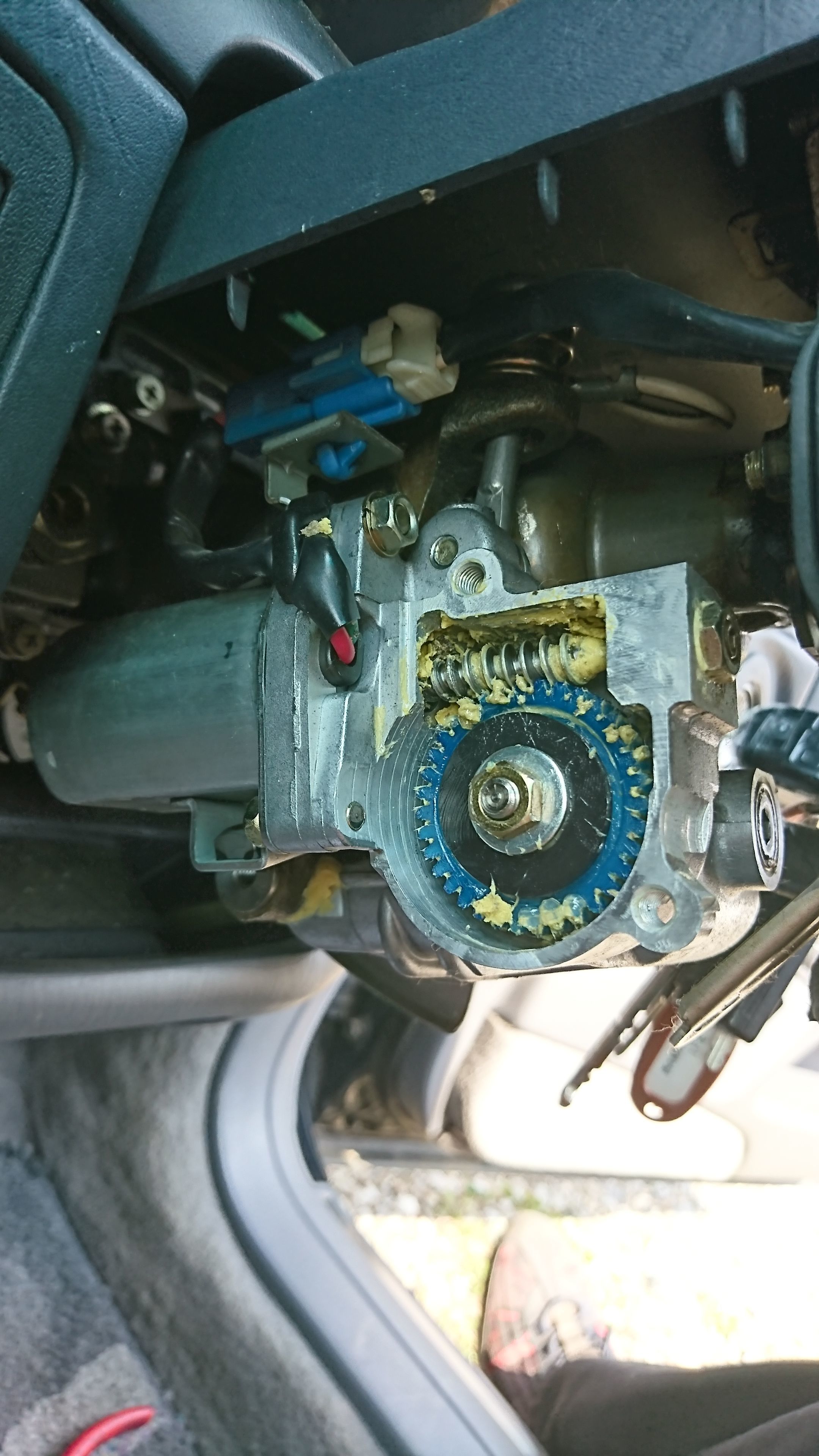 re-install the metal gear cover with the 3x 8mm screws, and the bracket. put the shroud cover back on with the 3 screws. 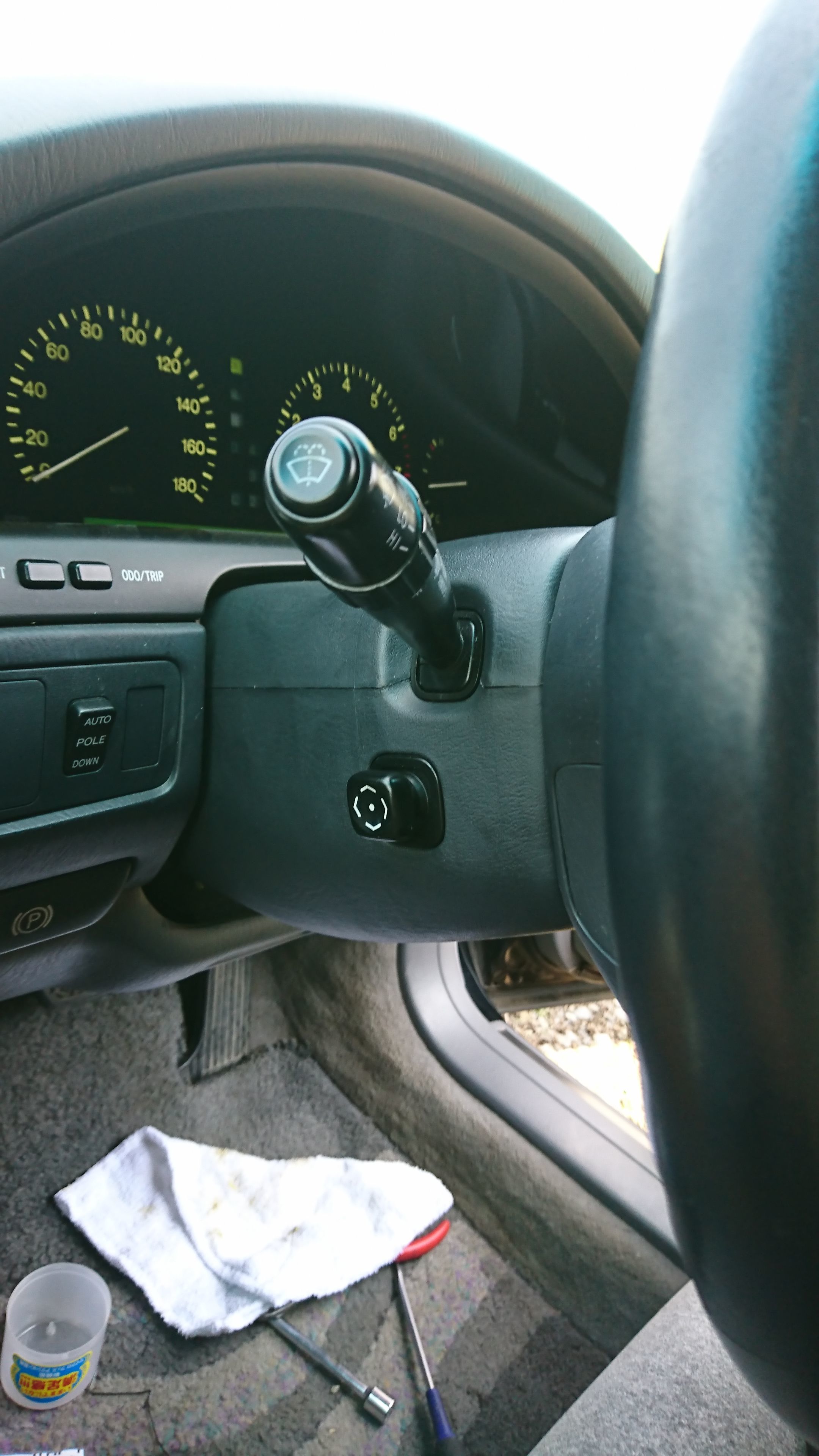 and test it out.

=Works flawlessly. when you put the key in? it moves into position like it should. and works manually for height adjustment.

I did another thing... 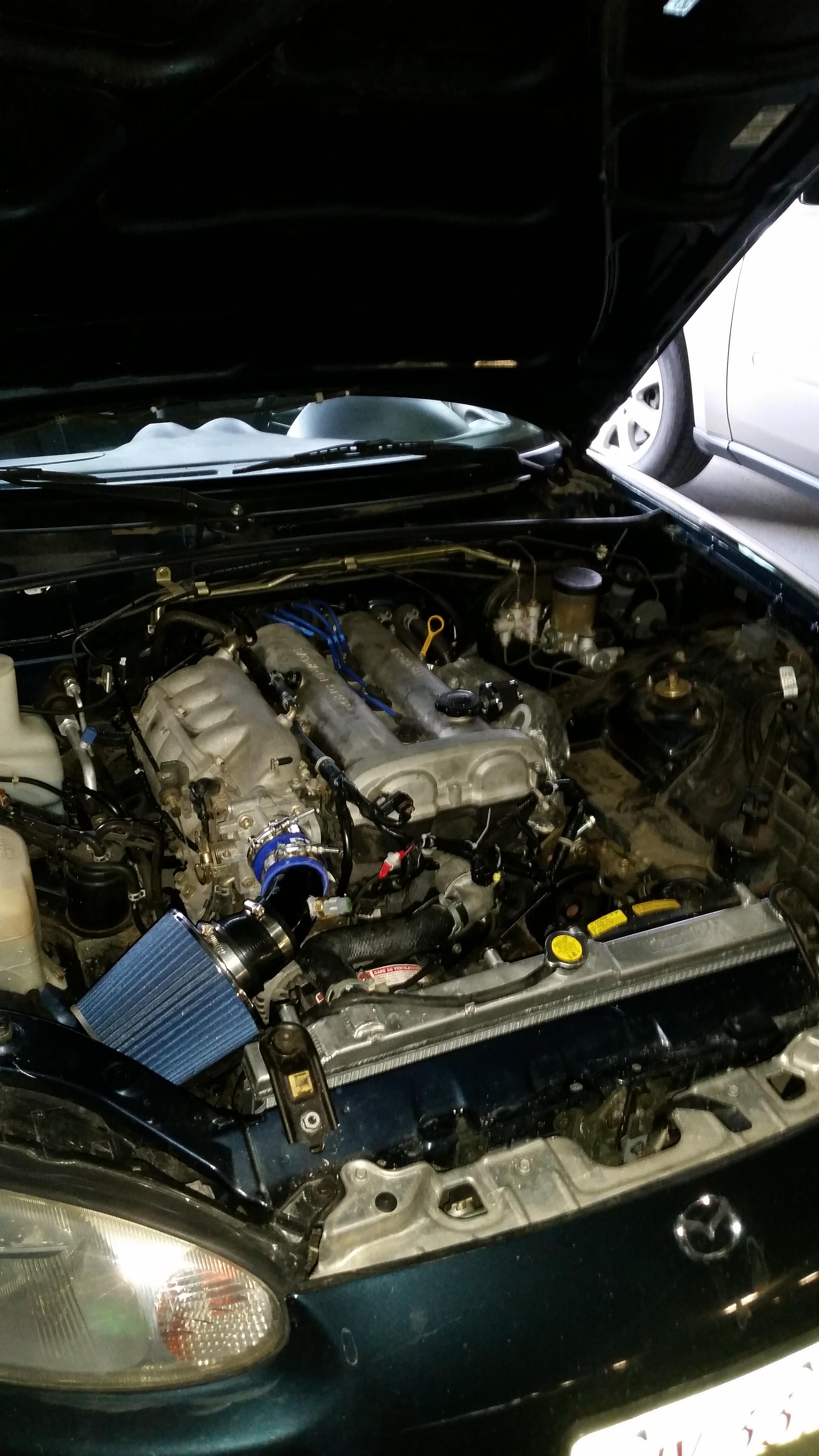 Need to make the runner longer. Miatas don't like super short intakes. It sounds rad though.

if you changed the filter to Blitz LM. it might have more vaccum. the problem is it has too much air. re-routing it across the engine to the left side is a good idea. but won't that clash with the Turbo?

For now the filter is going to be on the passenger side. The turbo will go on the drivers side.
This filter will be taken off when I install the turbo bits.