So I'm sitting at home with baby and Squeaky, the cat.

There's a knock at the door, and it's my old friend Dr. Vickers.

He's retired now and he's as tight as a frog's ass. His house had burned down recently and he has to replace everything. One of the first things to replace is a mattress.

So he asks if I'll go with him to a mattress manufacturer. He's too tight to buy at Costco! I say sure, why not. Baby wants to stay home with the cat.

Here is Dr Vickers at the mattress manufacturer:

And here is the good old Doc:

He's haggles intensely with the guy which is gist for another thread. The mattress guy is a Sephardic Jew from NYC (as I am), and the Dr. is a born again Christian from Huntsville, Tx.

To say it was like a Cheech and Chong movie would be to put it lightly. It had to be one of the funniest things I have ever seen. Oh, how I wish I had videoed it for Youtube. Hilarious is an understatement.

Anyway, the Dr. buys a Queen Size mattress, box spring, and frame for $300 (pretty good deal I think). And I help him haul it off in his 10 cylinder Dodge truck.

I've known him for years, and sometimes used him for a Dr. but I've never known what he did in his early career. So I asked him. I was surprised when he told me that he was the prison Dr. at the state penitentiary at Huntsville. And that he was the Ob-Gyn at the Goree Woman's unit. That didn't sound too appetizing to me.

But then he told me that he had a side job too. I said really, what was that. And he related the following.

He was the death certification Dr. at Huntsville. I asked what that meant. He said that because of the Hippocratic Oath, Drs. can't participate in executions. But they sure can certify the executed person dead. And that's what he did.

This goes back to the 1960s through the early 1990s. He actually remembers when Texas used to "fry them" and used "old sparky". In recent years they have been killing them humanely

, with a combination of drugs.

I asked him if he liked the work. He said "Hell, yes. He got $500 ( back then, it's probably more now), to certify them dead. I asked what it entailed. He smiled and said, "nothing but my signature"! I asked if he had witnessed many executions? He again smiled, and said "what do you think"?

I asked which was his most memorable certification. He said it was a notorious case in 1974 involving Fred Gomez Carrasco and hostages. They weren't actually executed in the prison, but killed, along with some hostages, in a famous bloody shoot out. 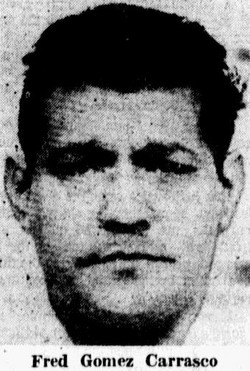 For many years Texas and Florida were #1 and #2 in executions. I haven't followed it recently but I wouldn't be surprised if it's still the same.

Anyway Dr. Vickers is a great guy and Dr., and I certainly asked his permission to tell this story. I think that certifying them dead for $500 was a dream job and he agreed. I should have listened to my mom and became a Dr.

BTW: Dr. Vickers predecessor at the Huntsville job was an old timer and went all the way back to Bonnie and Clyde. There's a prison museum in Huntsville and it has the original "Old Sparky". It used to have the actual car that Bonnie and Clyde were shot up in, but it's been removed.

Well, back to helping baby and the cat.
Thanks, rnoldh

Costco is too expensive? Oh my

Where is this mattress manufacturer? I've had my for almost 20 years... Good thing I saved the sport sex for the motels and floors or would've worn the springs out a long time ago

My favorite part of this story is the lady. She looks nice

JB
I don't see any cats.

My favorite part of this story is the lady. She looks nice


Ah, the pleasures from Treasures! She's one of the nice remainders.

I really do miss old Craig Cullinan and I'll miss the Doc. when he's gone.
Thanks, rnoldh

A last pair of shoes is like a last breath...

I don't see any cats.