aha, probably should google, it was purchased over 10 years ago...

clee1982 said:
aha, probably should google, it was purchased over 10 years ago...
Click to expand...

I've been to Wilkes Bashford in San Fran. Nice stuff but seriously pricey. Salesman was dropping names left and right."...and Kamala was just in last weekend, so was Willie Brown! Nancy (Pelosi) is a regular!" Kind of fun actually.

comrade said:
Wilkes Bashford opened a branch in Palo Alto, the heart of Silicon Valley, 20 years ago.
It was just when local businesses started to embrace "casual everyday" . Not that the
tech industry was ever known for elegant dress. I predicted that it would be gone in a
few years. Instead, they have persevered and possibly even prospered by selling
overpriced Italian clothes to a clientele that is largely clueless about style.
Click to expand...

Wilkes Bashford has great stuff - I really like their SF store.

The opening of the Palo Alto store 20 years ago was the decision of Wilkes Bashford himself.
Mitchells acquired them in 2009. I never really liked the store… too trendy for me, although I
own a WB suit and blazer from them from a now discontinued brand. In my opinion the store
has lost much of its individuality since the takeover.
Last edited: Jun 30, 2020

It was discussed a while back that Chester Barrie has closed shop (hopefully the company will make a comeback).

In the mean time, there are some interesting pieces floating around:

I picked up this NWT CG Gold Label suit for about $150 (Gold Label was their most recent high-end RTW line that's half-canvassed and made in Italy). It looks like the seller has access to left over stock: 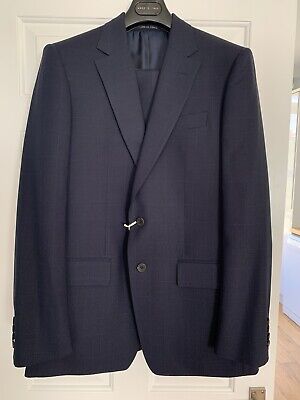 And this seller has bolts of fabric, and lining, from their Savile Row shop (including this 100% cashmere bolt): 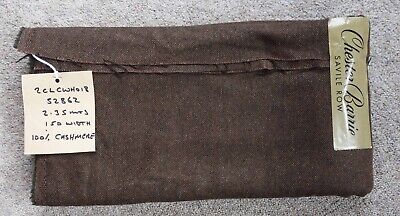 It was bought from Chester Barrie Sales so the quality is excellent. Colour is dark brown. It really is a marvellous piece of cloth. We bought a lot of material with the good intention of having it made up but never got round to using it all.
www.ebay.co.uk
Click to expand...

Chester Barrie was dead before it closed up shop. It was just a name that belonged to an investment firm that got put onto half-canvassed suits made in Italy and fused suits made elsewhere. The actual British manufacture that had produced the handmade suits that made the reputation of Chester Barrie was sold off 15 years ago and now belongs to Lutwyche, and also trades as Cheshire Bespoke, so you can still find that stuff around.
Quote:
Originally Posted by lasbar

A last pair of shoes is like a last breath...

comrade said:
The opening of the Palo Alto store 20 years ago was the decision of Wilkes Bashford himself.
Mitchells acquired them in 2009. I never really liked the store… too trendy for me, although I
own a WB suit and blazer from them from a now discontinued brand. In my opinion the store
has lost much of its individuality since the takeover.
Click to expand...

I've never been to the Palo Alto store, but first shopped at the SF store in the mid 90's. I bought my first Kiton item there and back then the SAs were talking it up as the pinnacle of hand-sewn craftsmanship, exclusivity, blah blah...

I agree that the SF store's individuality has declined since the Mitchell's buyout. Seems like the stocklists have become more generic and less interesting, but I think reflect a catering to the casualization and watering down of CM in SF. The shoe department, however, has a good range of high end makers like C&J, G&G, Berluti, Bontoni, Lobb, but no EG. In fact, I don't know if any retailer in SF ever carried EG?

TM Lewin to close all their stores. They will continue as a mail order/online only operation.

wonder how Charles Tyrwhitt is doing, I remember when I was in London it just felt there were more TM Lewin than CT

"I've never been to the Palo Alto store, but first shopped at the SF store in the mid 90's".

I first visited the SF Store in the early to mid 80s on business trips to San Francisco when
it was located in the Parking Garage building across the street. At the time they featured
Ralph Lauren. As for shoes, neither WB nor any other store could fit my 3E+ feet.

Big A said:
Half, although the interlining runs longer than some other half canvas suits (but not long enough to make it a full canvas jacket).

I haven't torn the jacket apart but the canvas feels synthetic to me.

The whole thing is pretty clearly machine made. I'm not in the clothing business, but a friend of mine who is suspects that it might be partially made in China and then stitched together in Italy to get a "made in Italy" designation. I'm not trying to slander the collection, I think that is probably pretty typical for a suit at this price point and to be honest I like the style of it. It would look good if I hadn't gained a bunch of weight.

here are some more pics. The most hilarious thing to me is the "handwritten note" from craft. I had forgotten about this until I open the box, it is just a cheap b&w printout. I'm kind of surprised they didn't at least spring for actual stationary

They were also kind enough to send an issue of the Rake along with it. Maybe that's where the stationary money went

Do you have any fit picks..? Would like to see this IRL.

Phileas Fogg said:
Who doesn’t want a cashmere hoodie for $2k.
I wonder if there’s a hoodie hierarchy?
Click to expand...

Trilby said:
TM Lewin to close all their stores. They will continue as a mail order/online only operation.
Click to expand...

I feel for the salespeople, and outside of London those stores were often a real improvement on existing high street offerings. I can't say I ever used them for more than the odd purchase, but where else are you going to get a self-tie white bow tie at short notice in regional Britain?
Last edited: Jul 1, 2020
Blog
Instagram

vida said:
Do you have any fit picks..? Would like to see this IRL.
Click to expand...

No, because I was too fat for it.
and that coat
(you need to kill it with fire)

Trilby said:
TM Lewin to close all their stores. They will continue as a mail order/online only operation.
Click to expand...

TM Lewin has closed its doors after it became the latest retailer to collapse into administration at the cost of 600 jobs. The 122-year-old shirtmaker's 66 shops, which also sell shoes, suits and ties, will disappear from the Hight Street but will continue to sell online. The firm blamed the...

Welcome back to Instagram. Sign in to check out what your friends, family & interests have been capturing & sharing around the world.