marlinspike said:
Are side-lacers at all practical for wearing?
Click to expand... 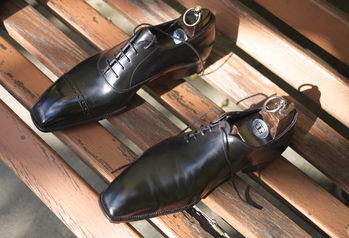 My side laces are similarly practical to regular laced shoes. My buckled tall boots OTOH can be a hassle to take off and on.

Off topic a bit, but perhaps this crowd will know. Is there a bespoke glover in Rome by chance?

Merola is based in Rome, producing in Napoli. I don't know if they do bespoke, and they are pretty out of the way, but I would ask them 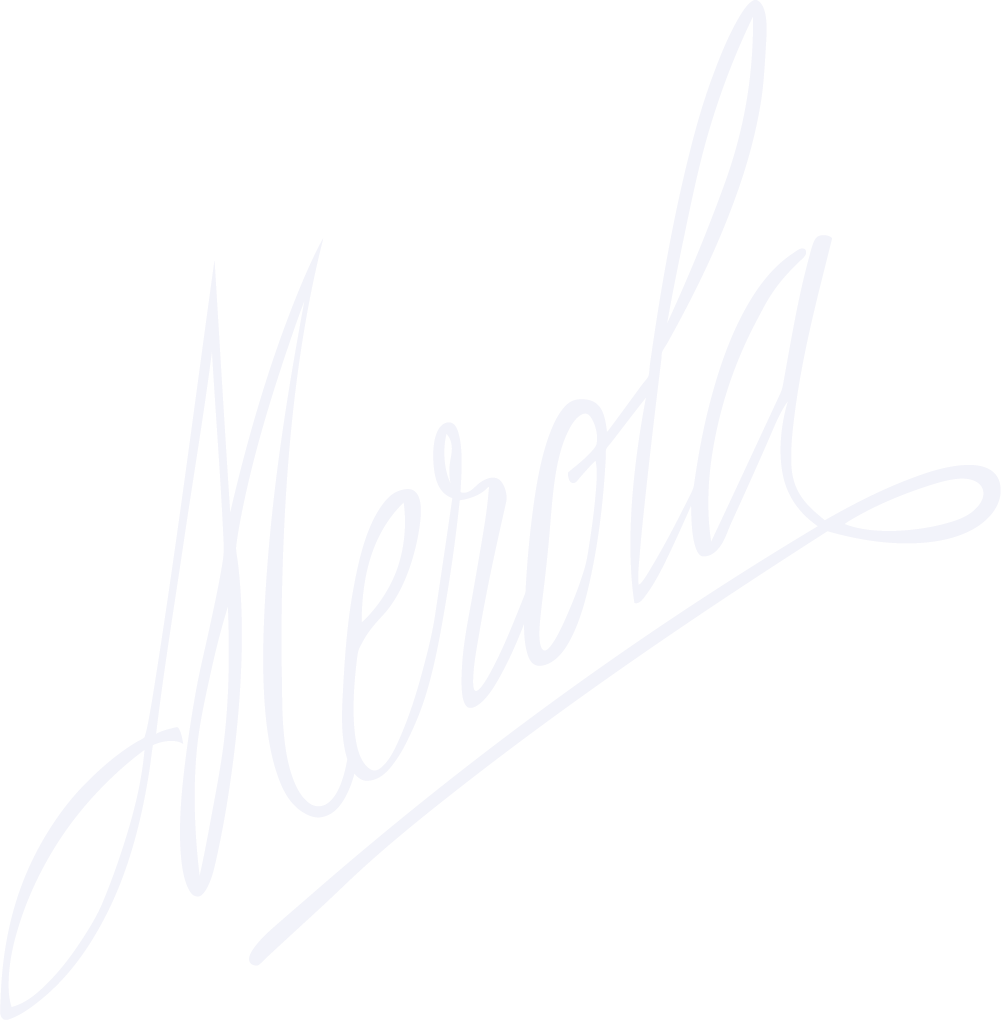 Contacts | Merola Gloves Made in Italy

Yup Cuban heels ftw. It is pretty much the rm William's santa fe if they were a loafer/slipper

The medallion seems to be sitting a tad too low in the vamp but it may be the angle of the picture.


The Chai said:
Yup Cuban heels ftw. It is pretty much the rm William's santa fe if they were a loafer/slipper
Click to expand...

bernoulli said:
The medallion seems to be sitting a tad too low in the vamp but it may be the angle of the picture.
Click to expand...

bernoulli said:
The medallion seems to be sitting a tad too low in the vamp but it may be the angle of the picture.
Click to expand...


The Chai said:
It's the same position as the rm William's Santa fe boots but I requested it to be smaller so it is more subtle
Click to expand...

Yes and no. Having a heel makes the walking in say tango dancing easier but because of the pressure put on your toes from the angle of the heel you end up getting sore quicker which is why I went with soft roo skin rather than calf apart from my preference of roo skin over most other shoe leathers
L

Hoping this isn't too spammy, I've included some links to my (non-monetised) blog for each of the following, as it's a pain to jam all the text in otherwise. Without getting very forensic it's hard to be sure exactly how vintage most of them are, but stylistically a lot of them seem to be in the vintage bucket. Cross-posting with the vintage shoes thread as... well, a lot of them are old.

I've been buying second-hand bespoke shoes on eBay for a while now. I gravitate towards the "big three" London makers (Cleverley, Lobb, Foster).

As I'm sure most of you are familiar with, this tends to be a non-starter in most cases since the fit of a bespoke pair is rarely standard enough for a random wearer (i.e. me). I've bought and sold probably 30 pairs and kept two that fit me well enough (and this is buying pairs that look like the outsole measurements are in the right ballpark for my size, not just random purchases). I've done reviews of 7 of those which are listed below.

But the strange allure of the makers and the fact that they can often be grabbed relatively cheaply makes me keep going back for more. And I only buy when I can be pretty confident that I'll be able to sell on for more, so it keeps the whole enterprise pretty cost-neutral (or even positive). 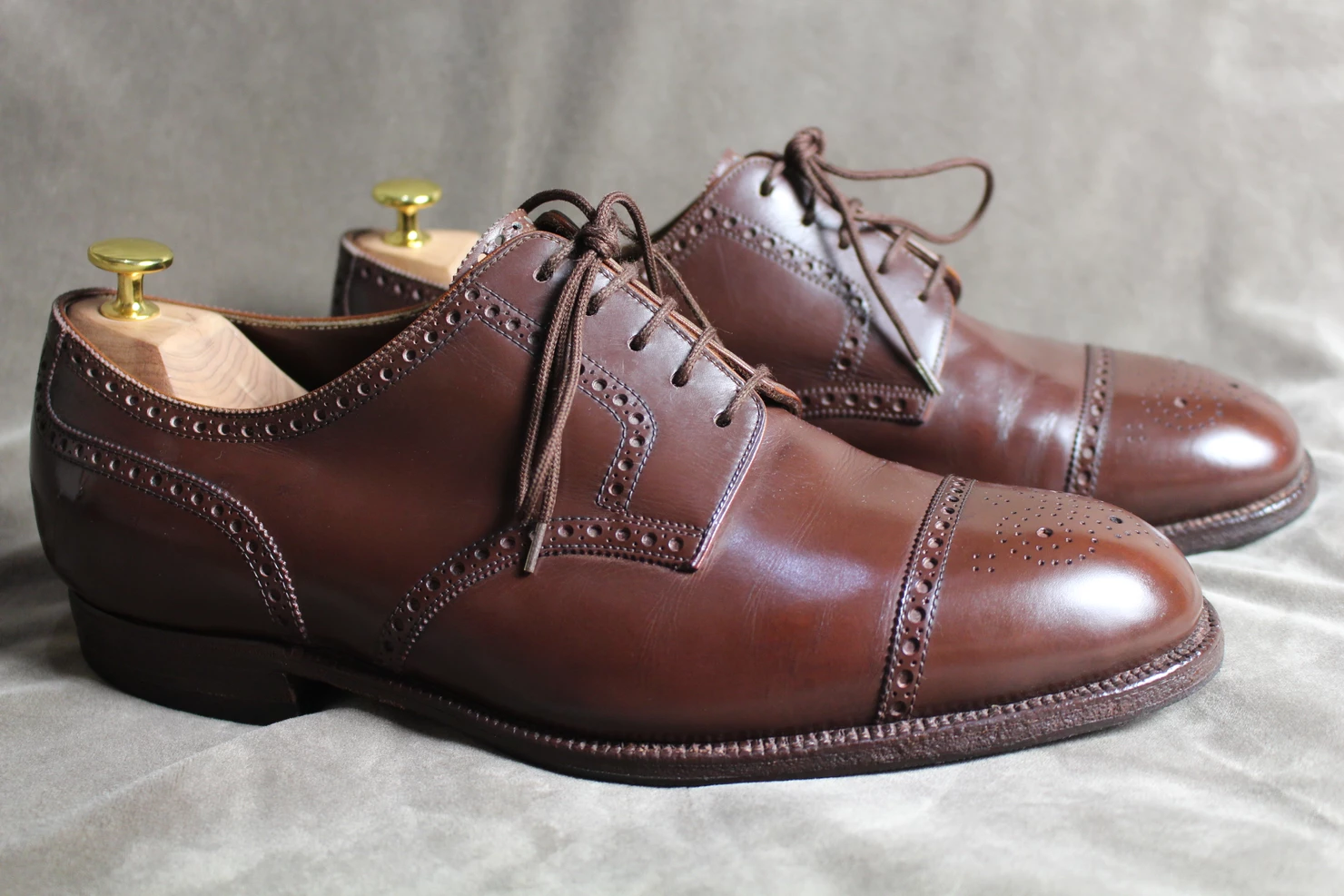 John Lobb St James Quarter Brogues
These were some wide boiz - the Derby lacing could accommodate a G width, maybe more. Other than that pretty much perfect size, so an ideal example of why outsole measurements mean diddly squat in terms of gauging fit. Could have fit pretty well if I jammed a rolled-up sock in the instep. 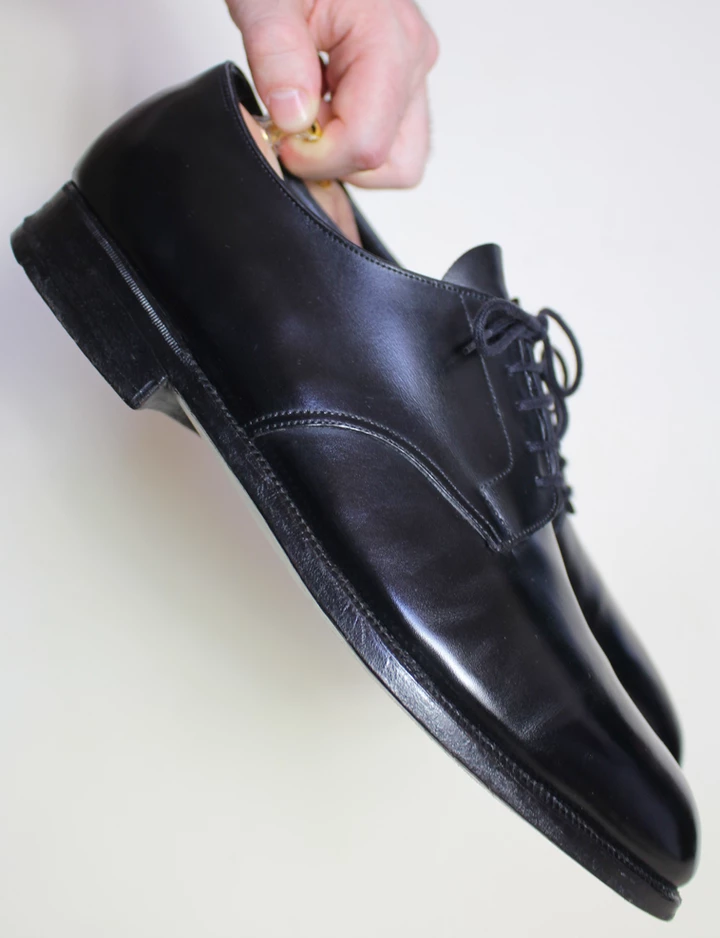 John Lobb St James Black Derby
One of the two pairs I've actually kept - not an eBay purchase, but rather from classicshoesformen.com. As such they were rather pricey (though they were in new condition), but the fit is really good, and as far as "safe" dress shoes go they are perfect. Far more useful to have in the rotation than black oxfords, in my opinion. John Lobb St James Snuff Suede Monkstrap
Another pair that, on paper, should have fit well, but on the foot were agonising after a few steps. The tobacco-brown suede is lovely though. I'd love a pair in this style that... you know... fit. 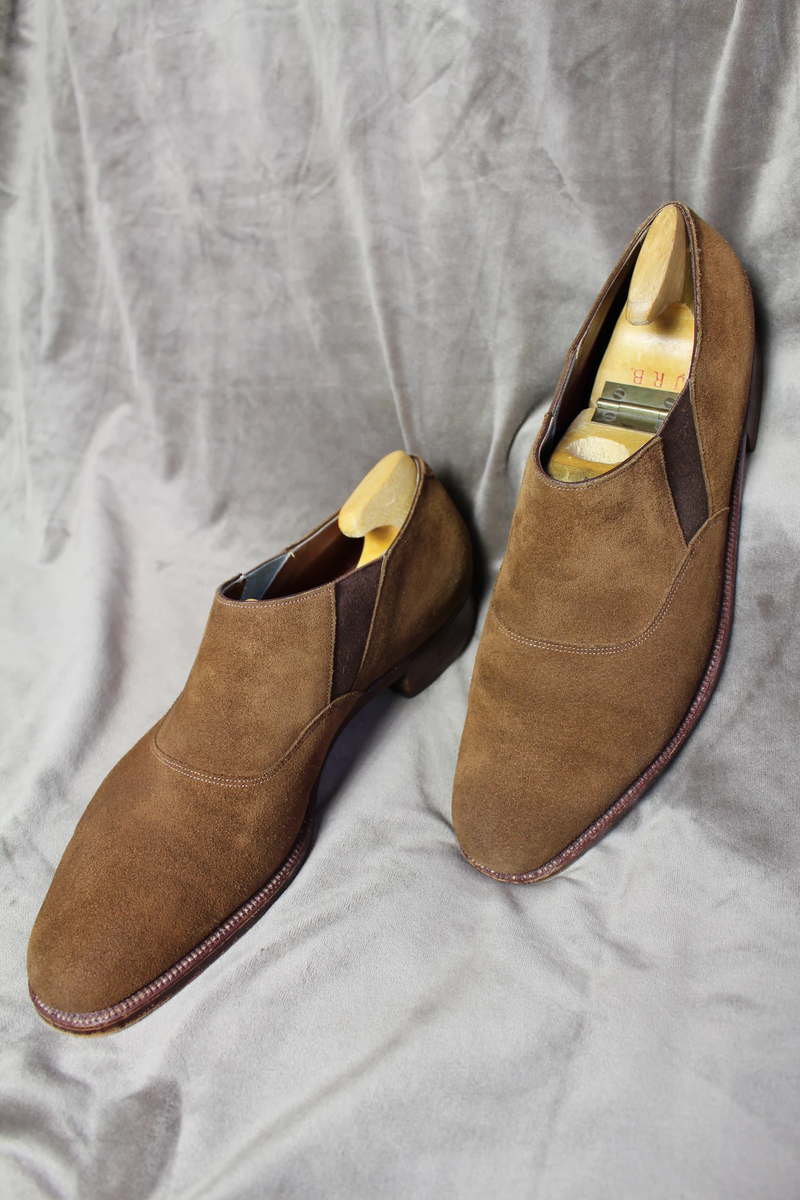 G.J. Cleverley Snuff Suede Lazyman
Not dissimilar to the JL pair before, these also included the bespoke trees (a surprisingly rare inclusion on eBay, they are often sadly separated from the shoes before sale) They were a really nice pair of travel trees, hollowed to within an inch of their life so they were incredibly light. I really struggle with lazyman and loafer fit though, and these were no exception. G.J Cleverley Wingtip Imitation Brogues
I loved these shoes - the fit was fractionally off, but noticeable enough that they would never be comfy. Probably the finest finishing on any pair on the list - the imitation broguing was exquisitely done, and the colour of the leather - a plummy dark brown - was very appealing. 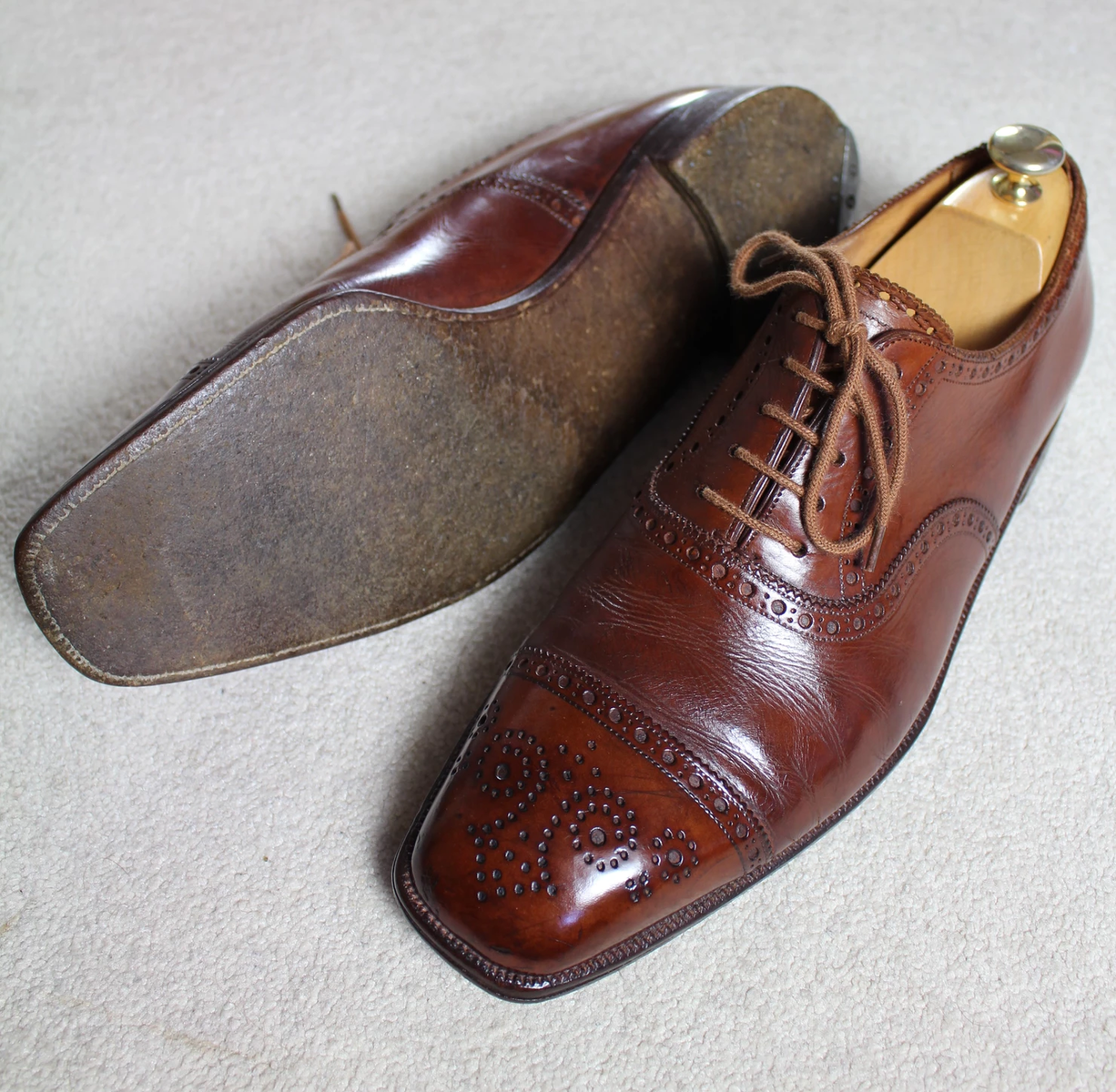 Foster & Son Captoe Oxford
Probably the oldest pair on the list (or if not, they had a very hard and abusive life). Pretty polarising design details with a really square toe, they are if nothing else a good photographic example of what patina looks like. Foster & Son Single Strap Brogue
The newest pair, which spurred me to put together this post. No review on the blog yet, but pleased to say this pair are an excellent fit. Picked up for a song on eBay as they were in a bit of a sad state, but I think the after photo (above) and the before photo on the eBay listing (below) show the difference a bit of cleaning, conditioning and polishing can do. Chunky but rather pleasing, all things considered. So that's it really. Think the only lesson here is don't buy second-hand bespoke shoes online unless you have 1) a lot of patience to restore them and 2) accept that you will probably need to sell them shortly afterward.

You should get them. Very versatile. 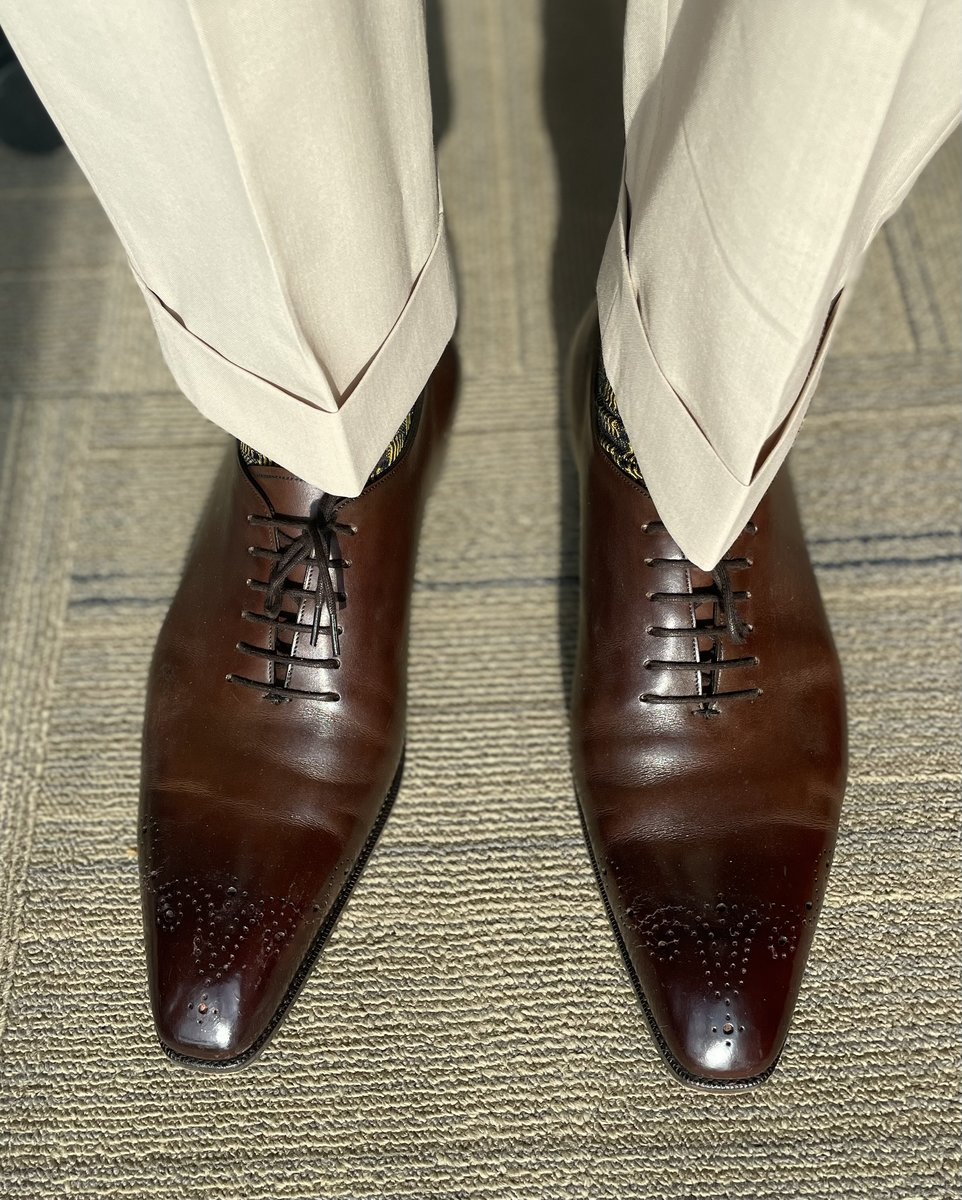 marlinspike said:
I have to say, this thread has made me want some brown wholecuts.
Click to expand...

Lovable Brogue said:
G.J Cleverley Wingtip Imitation Brogues
I loved these shoes - the fit was fractionally off, but noticeable enough that they would never be comfy.
Click to expand...