10 Seasonal Ties, 5 Odd Jackets (maybe a suit) and their Combinations

To kick things off will be members who have influenced and taught me in my first year at Style Forum. I thought I would ask them to set the tone, but down the road, the thread will be open to all members of SF.

Feel free to ask questions, but critical posts are directed to the Classic Menswear Lounge:

1. Photos of suggested ties.
2. At least five fit pics featuring a different coat and a tie from #1.

Goal: a large set of tasteful, well put together fits, using different patterns, textures and colors for inspiration and reflection. Click on gallery, "view all".

Fok has suggested I move things up so that it's a bit more tidy, and I think that's a good idea, so...

1. Solids or near solids

Perhaps the most versatile, can take any manner of patterns. For me, given my patterned jackets, these can provide a visual anchor, stabilizing the energy inherent in, say, a shepherd's check or guncheck. My choices: blue, brown, green and red. Simple but the interest is in texture or variegation 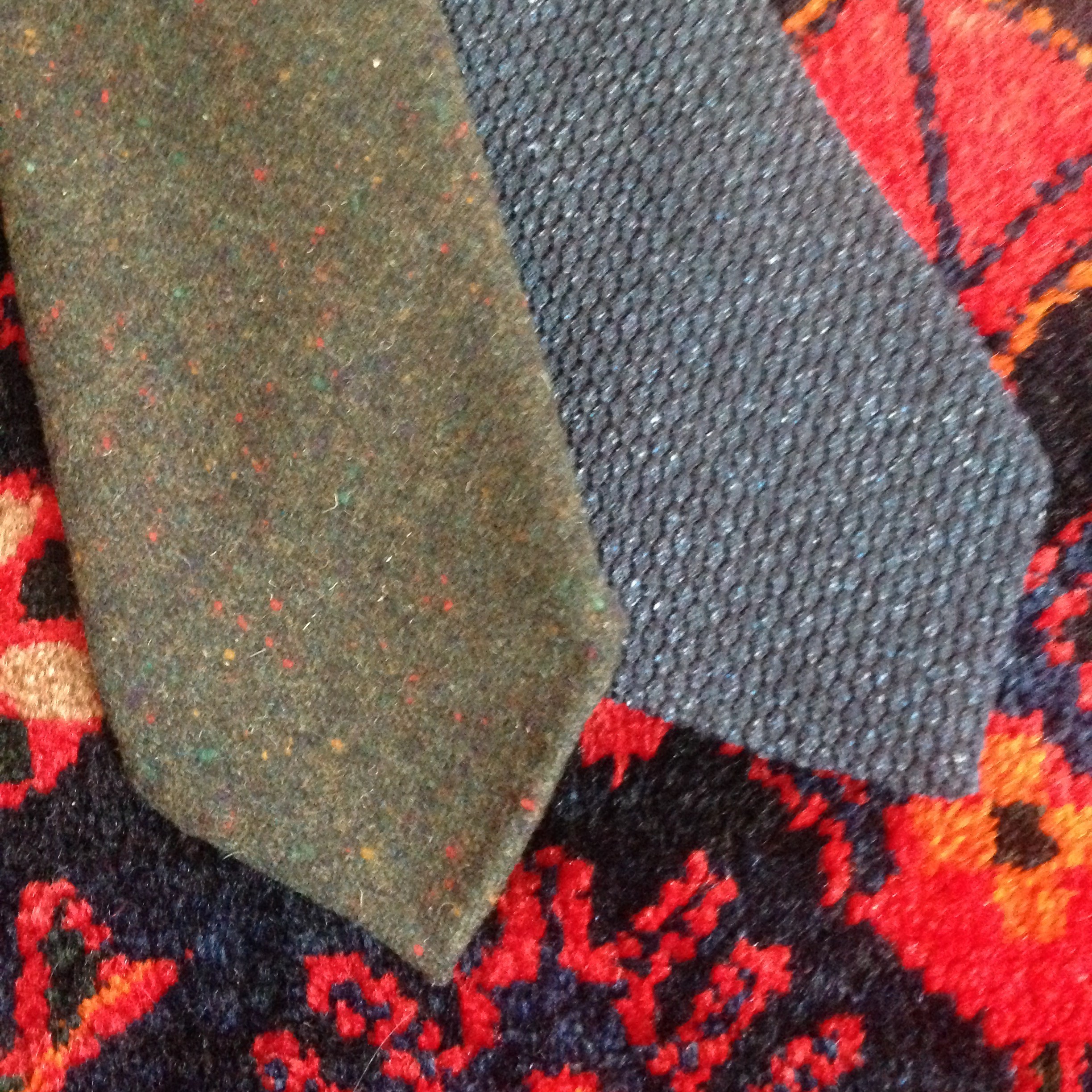 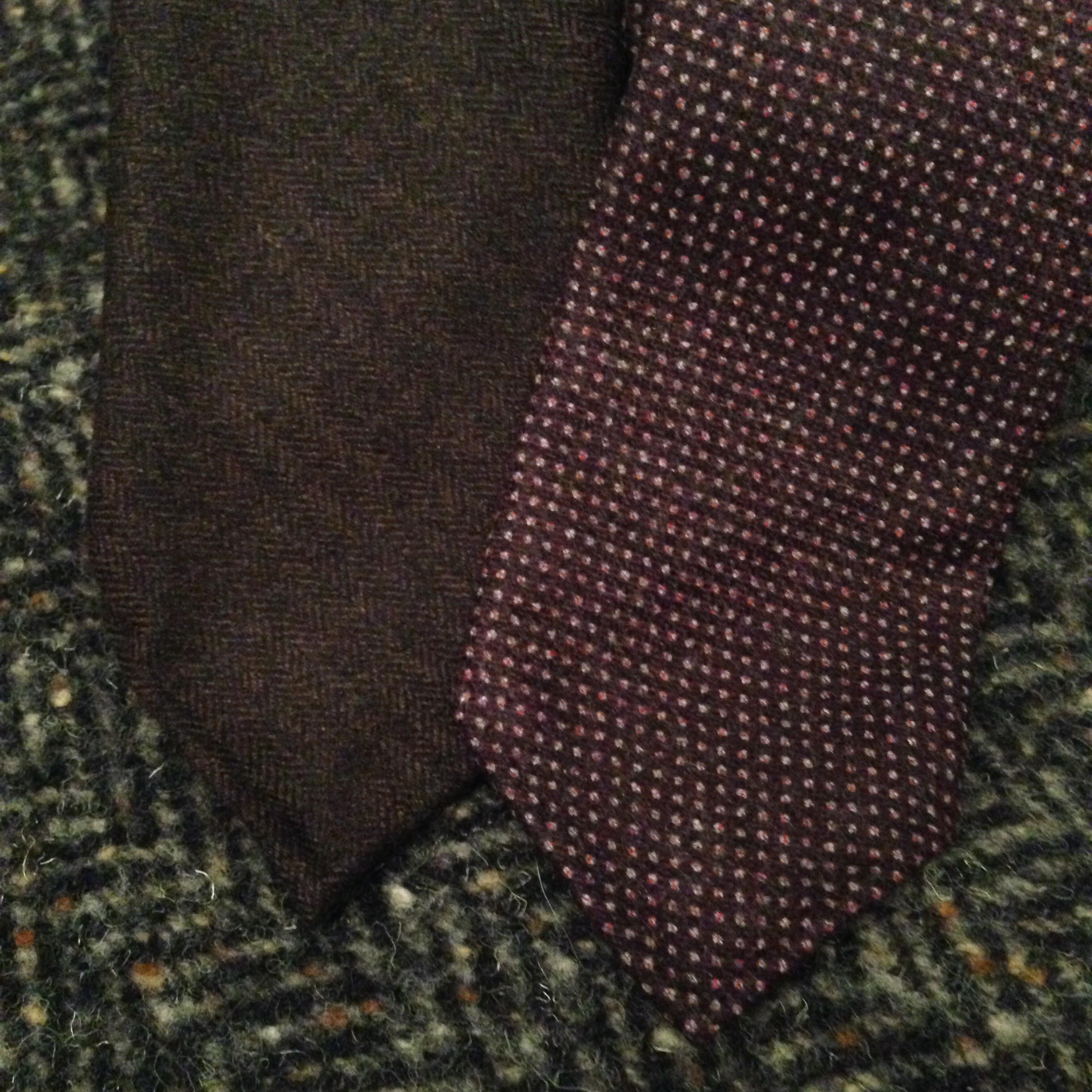 Ok, imagine the burgundy as resolving to a solid at a distance for sake of argument (it will be for old hands a suit tie, but still...). The grenadine has the advantage of being a coarse weave (a knit would be fine too). And yes, the brown is a herringbone so...

Easy to wear with solid jackets to introduce some visual detail but also with other patterned jackets, depending on scale. Houndstooth and basketweave provide other salient options. Smaller scale fades into solids so has the same utility (see brown above). 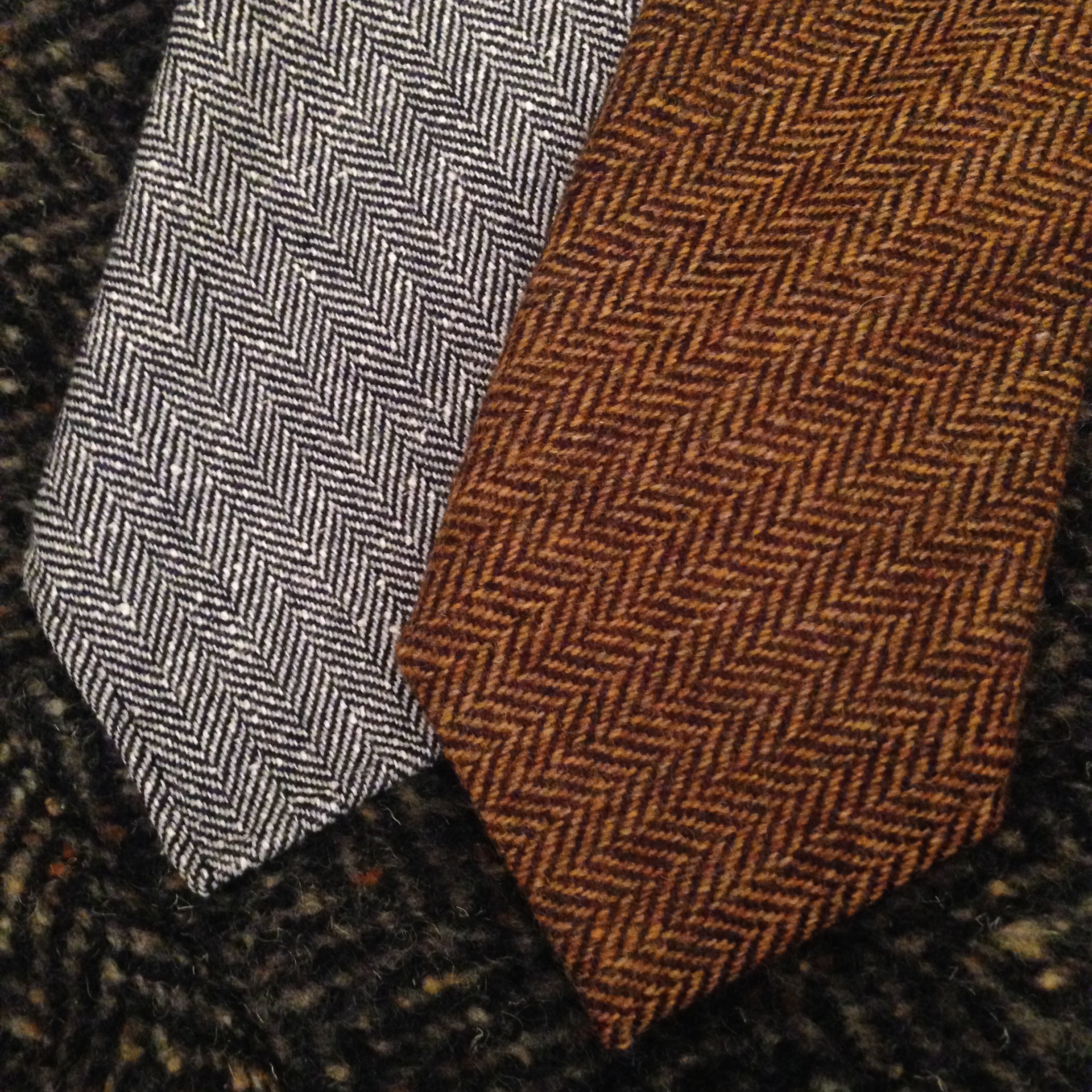 One of these much more rustic than the other.

Different ground for the stripes here. Blue and brown base for versatility. The brown is my most recent pick-up (please notice the rust flecks in the base). 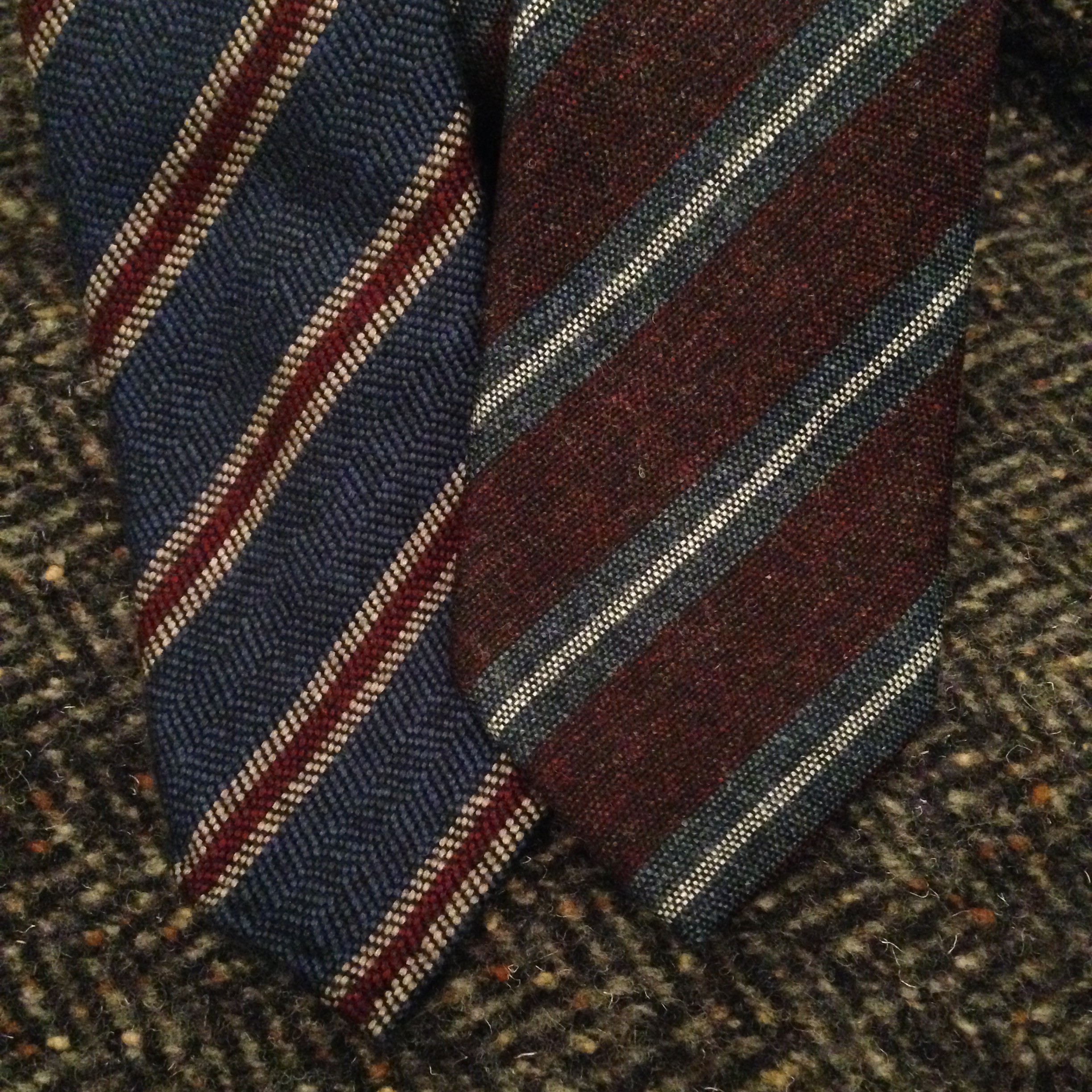 Of all the patterns, I find these to be the easiest to wear (for me, easier than checks like gunclub ties). I would like a blue/navy version but haven’t found the right one yet. In colors such as brown or saturated blues, and/or with stronger patterns, tie pushes away from strong association with weddings (cf. a black and white version in wool).

This is a nice light brown one (see fit pic below). 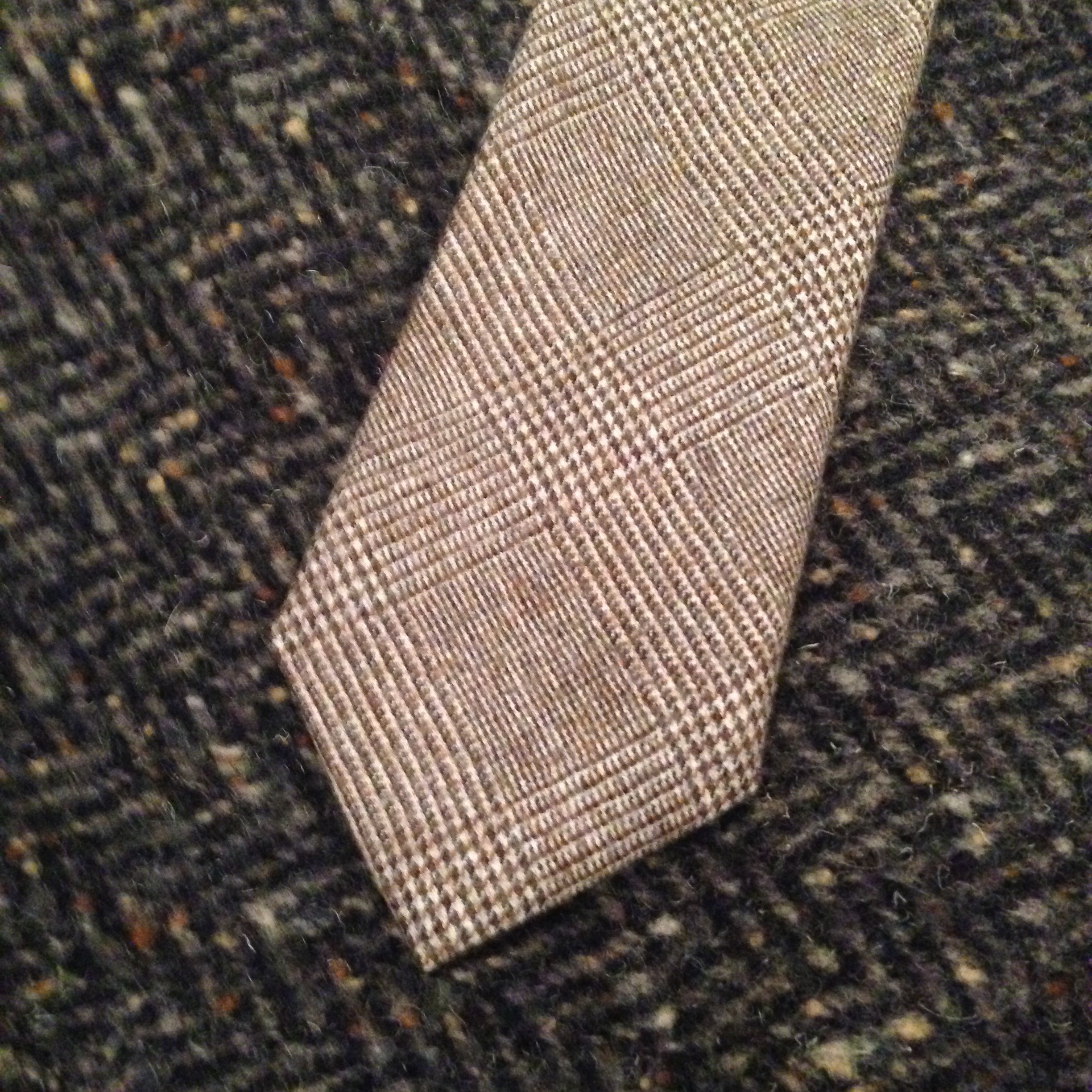 Medallions provide a nice change from the more staid options above.

Tweed and madder? Of course. 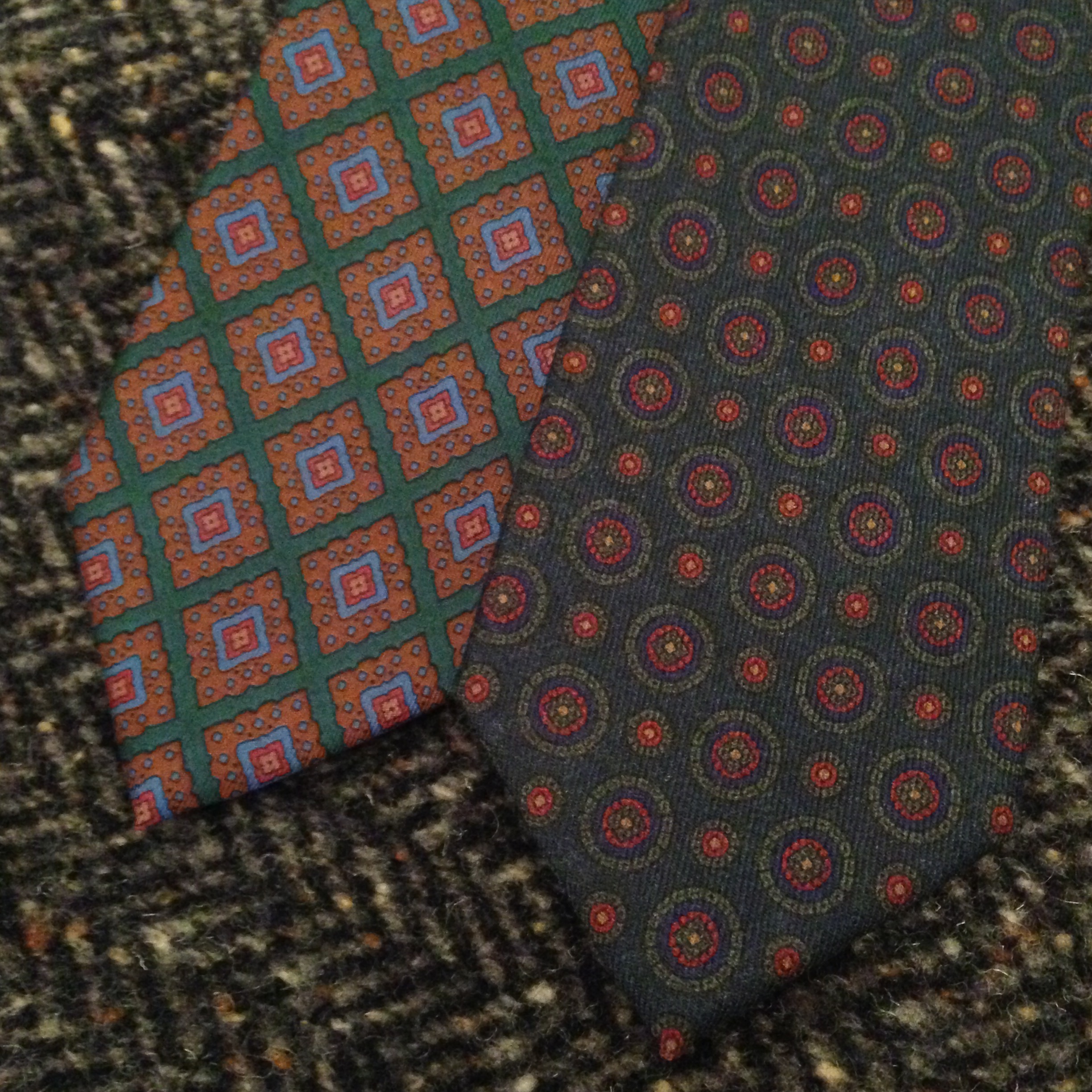 The madder is on the left, challis on the right (the challis has a dark blue base).

I'm an academic at a research institution in the NE, teach some, mostly research. True four season wardrobe though with weather changes, who knows? [If you're interested in more about the academic context and my attempts to navigate it sartorially, see the interview here: http://www.keikari.com/english/interview-with-tweedyprof/ ].

Jackets are all RTW (unlike some of the bespoke examples you'll see soon from others). They are bought opportunistically, given a meager academic budget, but with an eye towards versatility.

Sorry the pics are not of the highest quality. But these are representative of pairings and how I dress for work in the Ivory Tower. At some point, I hope to have other academics in the thread too (@emptym and @unbelragazzo will add their perspectives too). 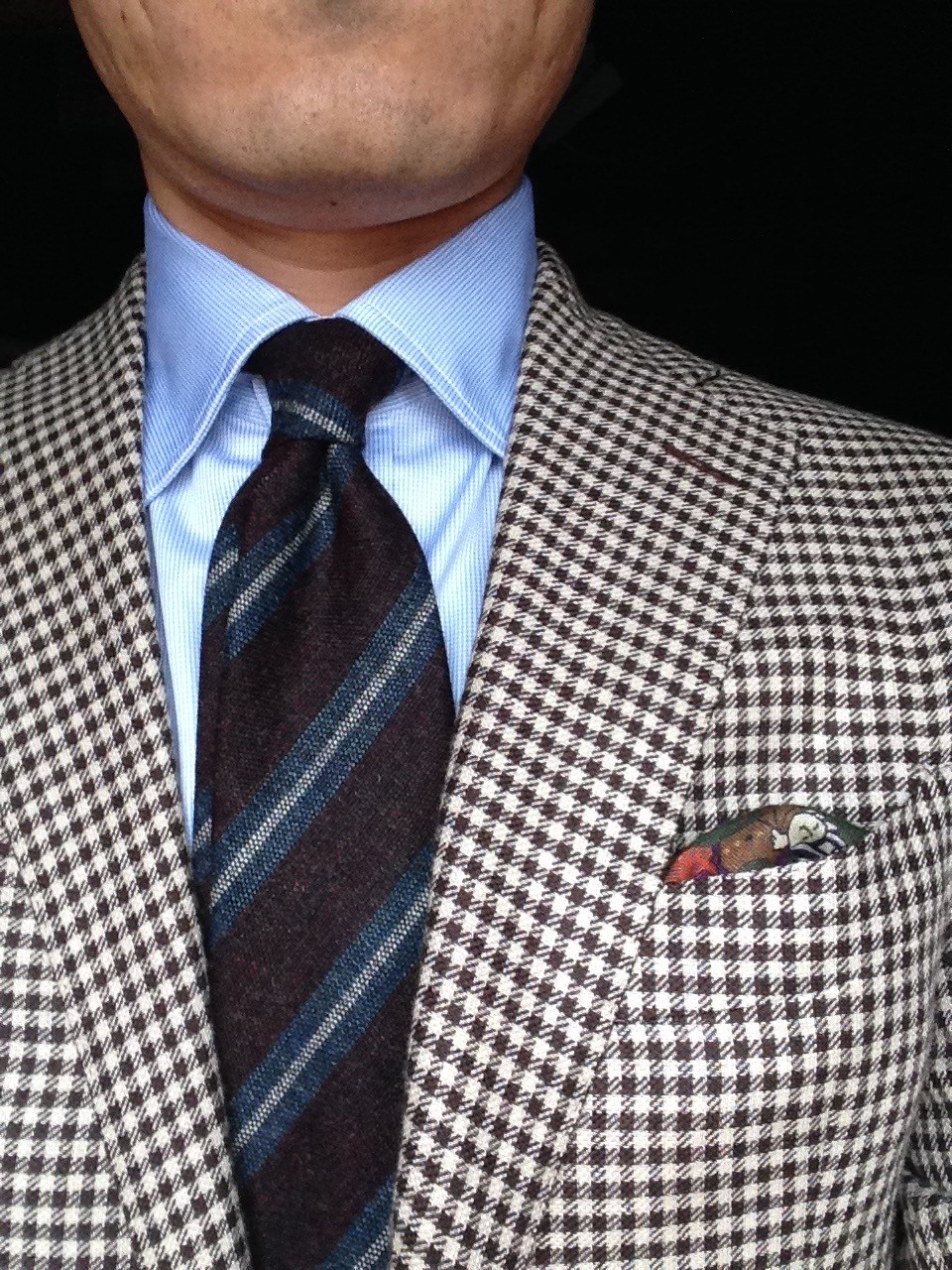 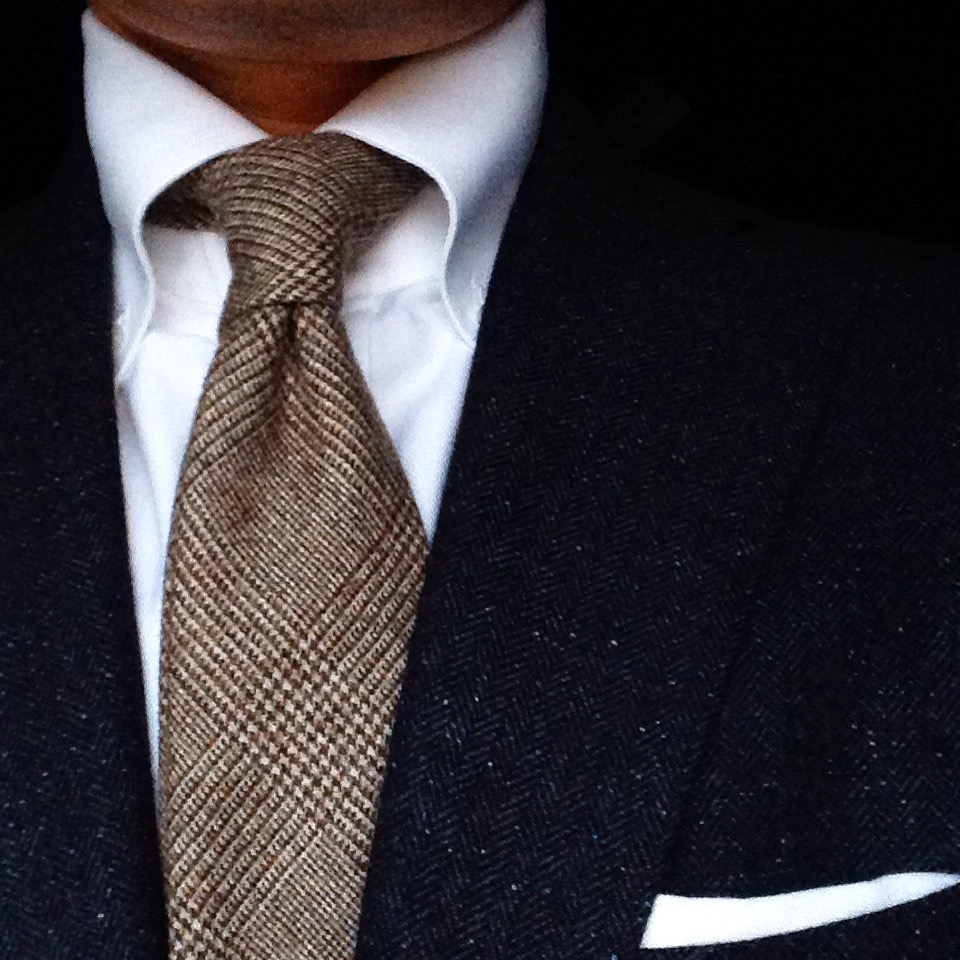 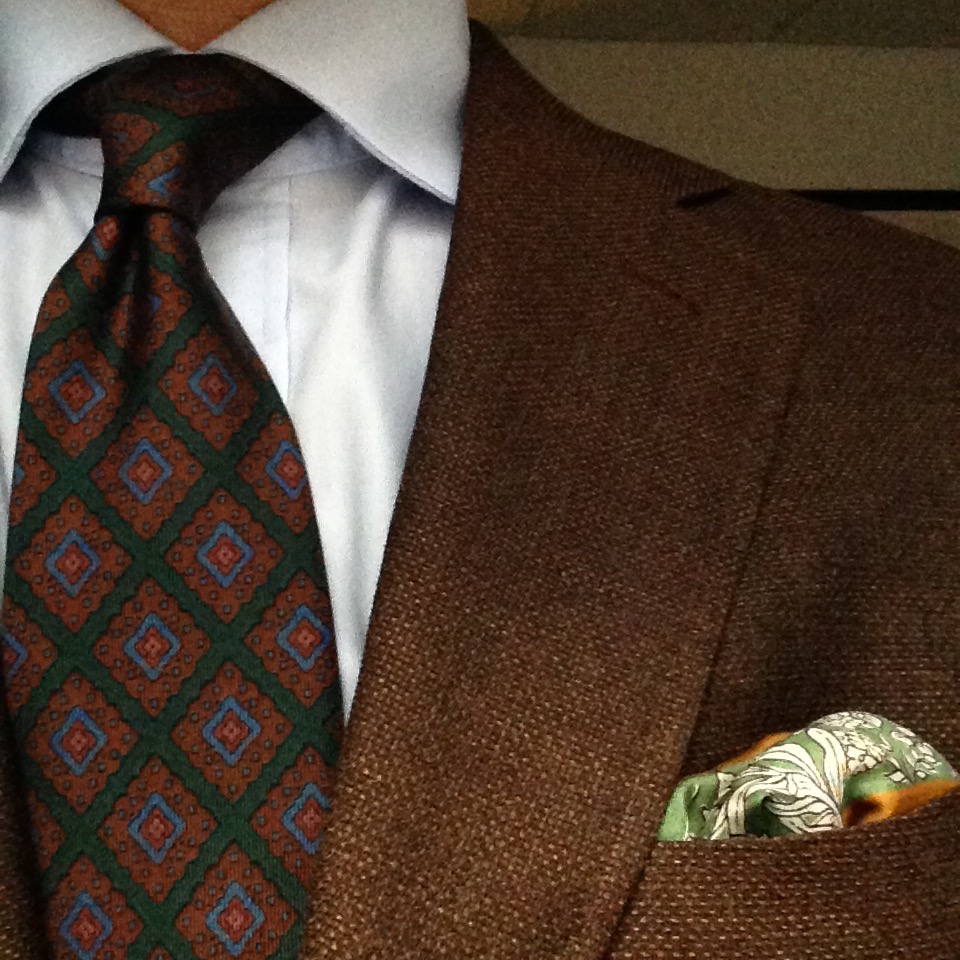 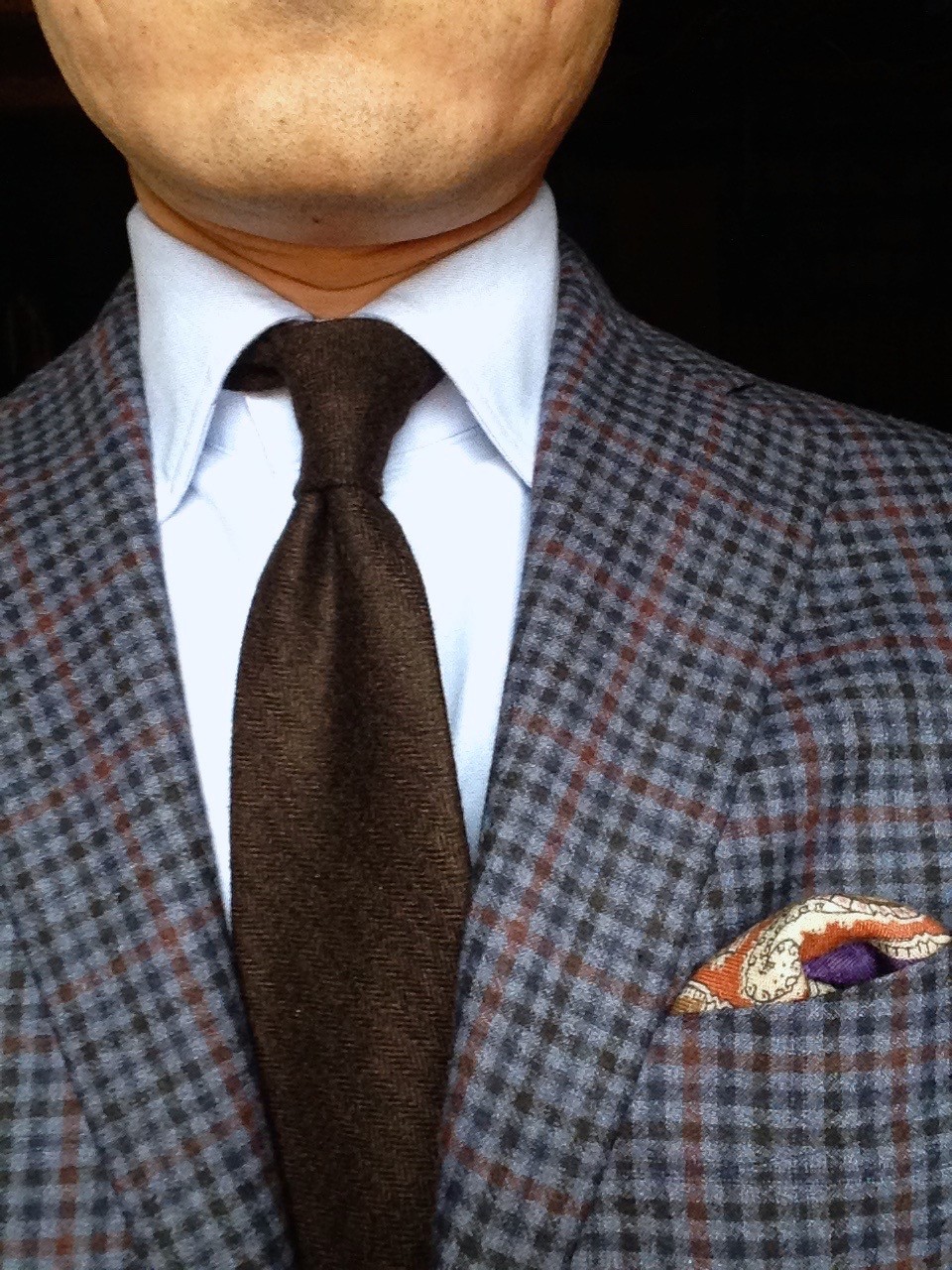 5. Copper HB with Green Plaid (hard to get the green color of jacket, but "nori" isn't a bad term, thanks @Mr. Six ) 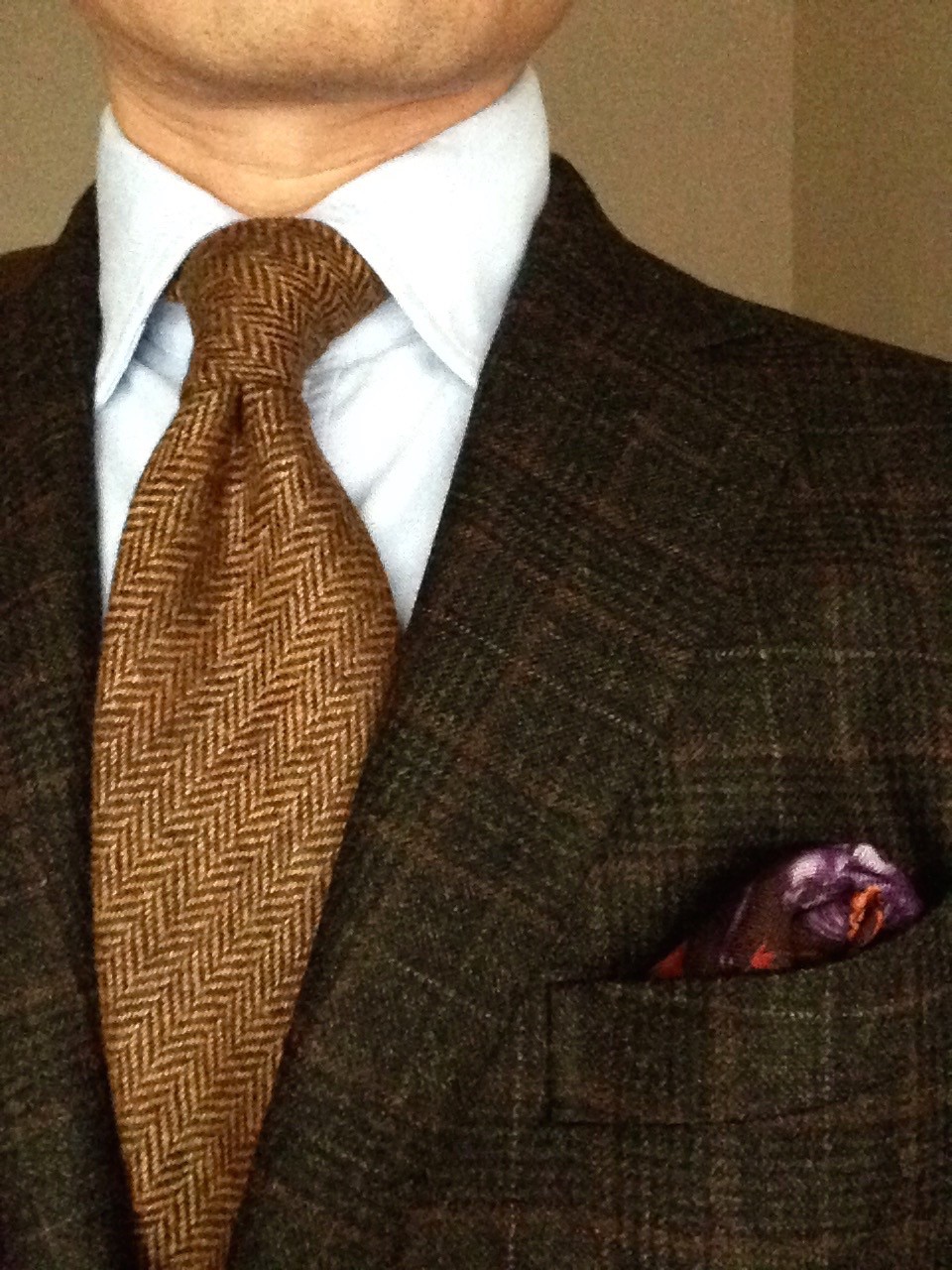 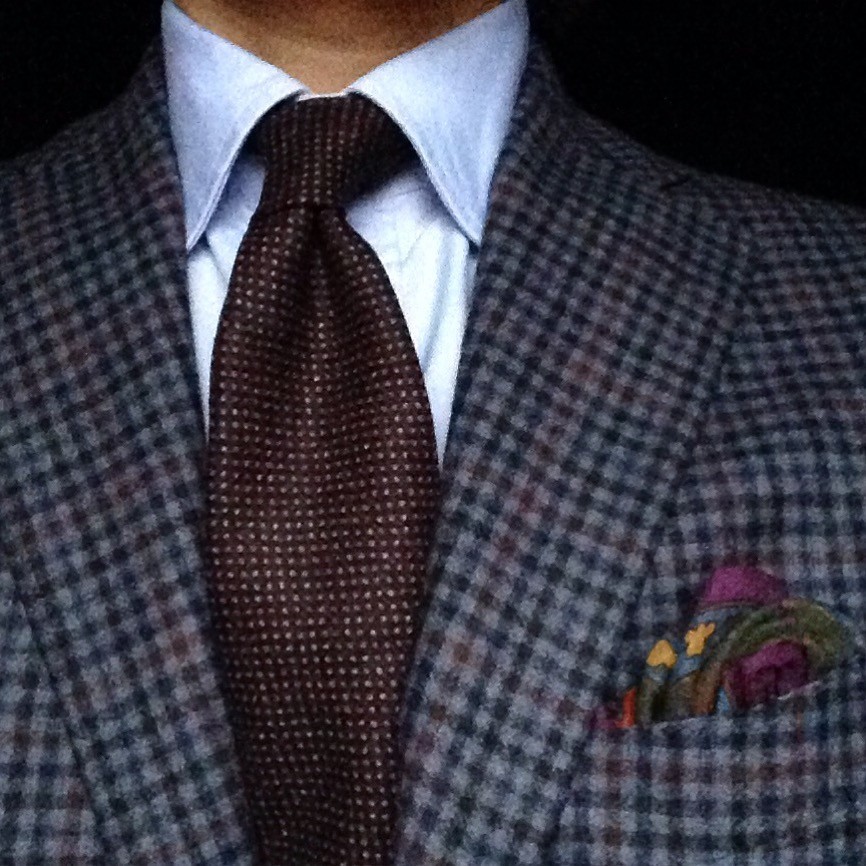 This is going to be a fantastic reference thread. Subscribed!
"Ain't nuthin' badder than tweed 'n madder." --Vox, as interpreted by Pliny

You could have invited Manton and called the thread "The Emperor's New Clothes".
If the service is free, then you are the product. - anon

In for sure.
Looking for:

Definitely in for this. Been thinking a bit about what a 5 jacket wardrobe would look like.

Will follow this. Good idea.
I know quite a lot of stuff, but should be more careful in pointing out to people that they are wrong and/or stupid.

Coxsackie said:
You could have invited Manton and called the thread "The Emperor's New Clothes".
Click to expand...