Shirts Anderson said:
Oh no, just Woolrich. Those Cabourn parkas are amazing but I can't justify the splurge...for now. But yes, it was the hope that the ten-c could replace the Woolrich. It certainly has the look of something that could brave a cold winter and from what I see on various sites it is certainly being sold as such. Disappointed to hear that is not the case.
Click to expand...

I think it just depends on how warm or insulated you want to be. I've gotten through cold Russian winters in nothing besides a waxed cotton jacket, cashmere sweater, dress shirt, and some baselayers. Obviously no insulation to the jacket. The Ten C would be certainly warmer than that.

Don't have any experience with the Woolrich, but the Everest parka feels like you're wrapped in a thick down blanket. It's warmer than my Ten C, although I think both would get you through any kind of winter, tbh.
Last edited: Dec 5, 2016

I had a short parka with the liner and felt a sweater was warmer.

habitant said:
I had a short parka with the liner and felt a sweater was warmer.
Click to expand...

Been wearing my olive snow smock pretty regularly for the last 4 years in the fall~inter. Still hasn't softened up after multiple washes & wear and I am finding the jacket less and less appealing.

Areas that receive friction like sleeves and belt are showing black(?) flesh after the olive surface has faded- similar to raw denim. I'm not sure if I like it.

At this point I almost forgot that this was a $1200 jacket and I intend to swap out the shitty original zipper with some riri's.

Regarding warmth, I think the searling liner does a surprisingly good job. It's not a North Face down jacket but I've never felt uncomfortably cold wearing my Snow Smock + Shearling liner. It's high neck also helps with holding body temperature. Where I live the temperature goes down to -22 C
Last edited: Dec 11, 2016

ceoceo said:
Been wearing my olive snow smock pretty regularly for the last 4 years in the fall~inter. Still hasn't softened up after multiple washes & wear and I am finding the jacket less and less appealing.

Areas that receive friction like sleeves and belt are showing black(?) flesh after the olive surface has faded- similar to raw denim. I'm not sure if I like it.
Click to expand...

I haven't owned mine for as long of a period, but I assume the stiffness is part of the design, no? At least on mine, I find the fabric gives the outerwear an interesting "three-dimensional" effect. Realize that's a poor way of describing it since all clothes are 3d, but hopefully you know what I mean. The weird drape is how you get those interesting silhouettes (which is why I bought mine, anyway).
Last edited: Dec 11, 2016

I have a snow-smock in the apertura color i think its called. Its like a grey colour. With the hooded shearling liner its got me through -40c celsius. At some point it doesnt really matter if its Ten C, Canada Goose or other, cold is cold and you do the best you can with what you've got. A jacket is one thing, but if youre seriously trying to keep warm, good gloves, boots, and hats are also important. It also depends how you wear them. When its below 30 celsius, personally I give up any intention of style and I just go full survival mode with hood up zipped all the way through. -20 or above and I fold down the collar for style and stuff.

Yesterday I saw a japanese guy at the airport. He had a extremely nice M65. I thought it was a Ten C in a new cool brown colour.
The fabric had the same unbelievable feeling like the ten c OJJ.

What happened then was a big surprise for me. He told me, that he have a Ten C in olive , but this brown M65 is even better, more durable....It was a Timberland Gunstock Mountain M65 ,
He told me, that he prefer it over the ten c, and that he regret to spent 1000 for the ten c. 400 "only" for the timberland, was a much better deal he thought

Your message is very interesting. I found the jacket on timberland web site : https://www.timberland.co.uk/shop/en/tbl-uk/gunstock-mountain---mens-m65-field-jacket-A1AGU838
The jacket and the fabric seem very closed to the ten c stuff, for only 160 GBP...

To be sure that I have correctly understood what are the benefits (except the price) of the timberland M65? What about the liners?

Several points:
- Ten C bisness model is built on very small volume;
- Ten C is (to me) the first clothes maker on this kind of fabric;
- so if a big company, such as Timberland, decided to do the same clothes they can decrease a lot the price.

I have Stone Island or Cp Company since the 90's.
In the last two years I tried at least three times the Ten C Field Jacket.

I ever wanted one, because of this reasons:
- fantastic classic timeless M65 Styling
-fantastic unbelievable, "never seen before fabric"
-very good workmanship

When I saw the Timberland, I looked carefully to it, and it was very well made. I was on the side without the Timberland logo,,,,,,for me it was clear: this is a ten c......
The fabric looked like the Ten C fabric, and after I talked to the owner, and he told me, touch it, and feel it, I was even more sure, that this the Ten C in a new Tobacco colour.

I was deeply surprised when he told me that this is a Timberland... he said his ten c looked like ten years old after a year. And this timberland had much less signs of wear.
He bought it in Japan, and the shop owner told him, this is japanese jersey twill.


On ten c website they say somewhere, that the japanese fabric is finished in italy. Whatever that means ? Maybe this is the difference which is responsible for the fast aging look? I don't know.


Today I drove 70km to the next Timberland store, wanted to buy one, but it is sold out. The lady in the shop explained, that timberland have since years M65 like jackets for 200 to 220 Euro retail, but this Gunstock Mountain was a different level., and therefore the retail was 399 Euro!!! So we are talking here about an unusual expensive Timberland (399 retail) which is extremely similar like a 1000 Euro Jacket. And, this is amazing: a owner of both jackets preferred the Timberland

Do I need to buy this jacket? Can the Timberland logo be removed off the sleeve?

^na man you don't want to do that. As per the website it's one of the features :
Featuring a round Timberland

logo detail on the sleeve

Cool alternative. Be nice if they made other jackets using that material...

Could use a little input on the TenC Parka M51.
Will be getting the shearling liner but also wearing without.
Am a solid 20" PTP and 32" waist at 5'10 165lbs

The M51 is pretty oversized. You will likely be able to size down and fit the liner.
For sale: Engineered Garments Chambray Western Shirt, BNWT

So I got the Timberland Gunstock jacket. I think it cost me about $220 shipped from UK

The fabric is indeed identical to the "OJJ knit" TEN C uses on some of its garments. I actually take back what I said previously about my snow smock :

because wow I forgot how stiff these are in the beginning. Compared to the new Timbs jacket my old TENC is much more comfortable (although it still makes the squeaking sound).

Workmanship wise, other than the sorry excuse of pockets that barely fit Galaxy Note 4 vs. usual field jackets that can fit a kindle comfortably, I also think Timberland jacket is better constructed.

Little details such as articuated sleeves, gusseted shoulder and reinforced brim on the stowaway hood are nice touch. "The angled bellow chest pockets offer lots of storage" or
"Featuring premium leather pull-downs" as stated on the website are not present on the jacket, however.

Size 46, bought size small. I also have a size 44 wind shirt from a while ago and this jacket is more close to 44 than a 46- probably because they did not have lining or layering in mind? shearling liner fits inside nicely enough. 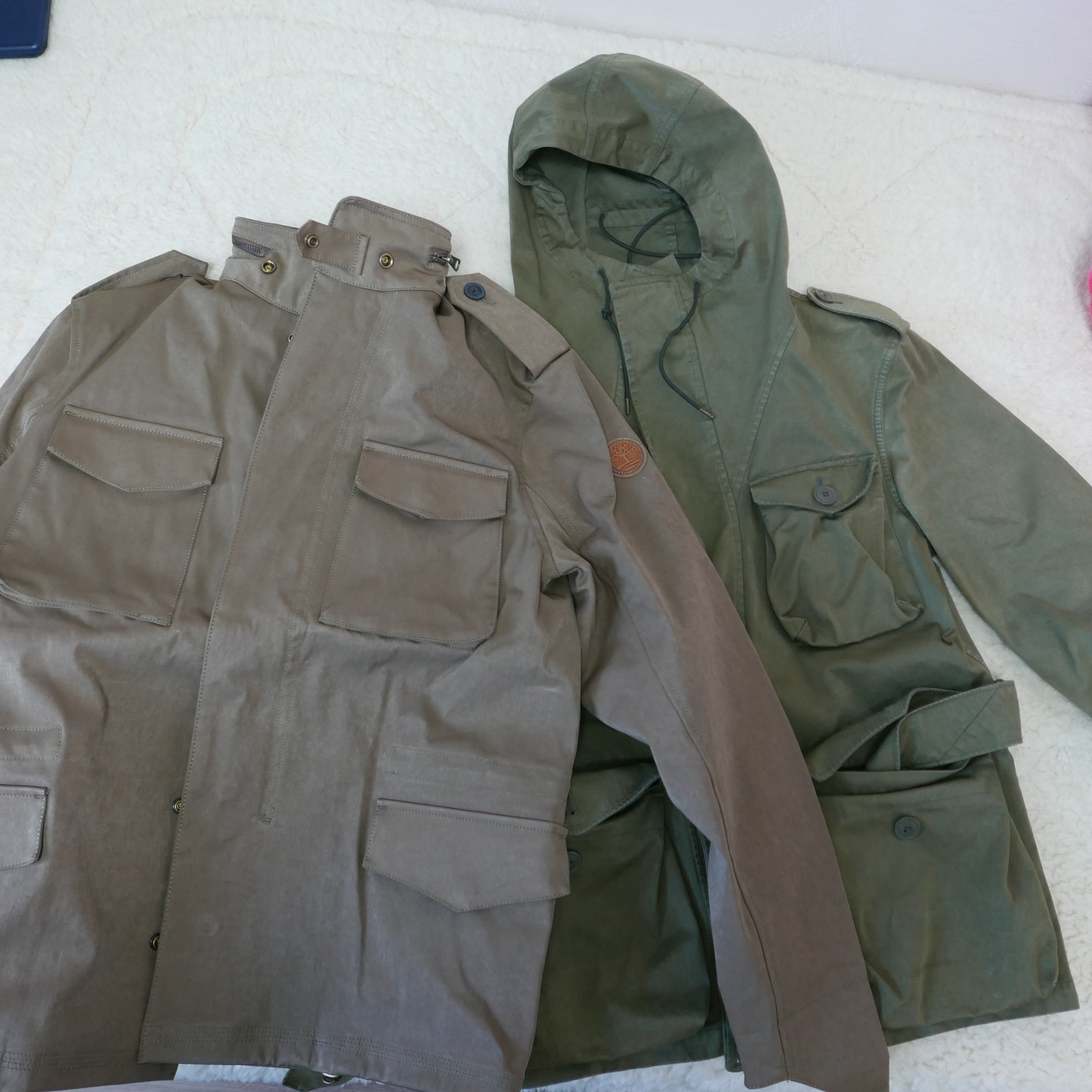 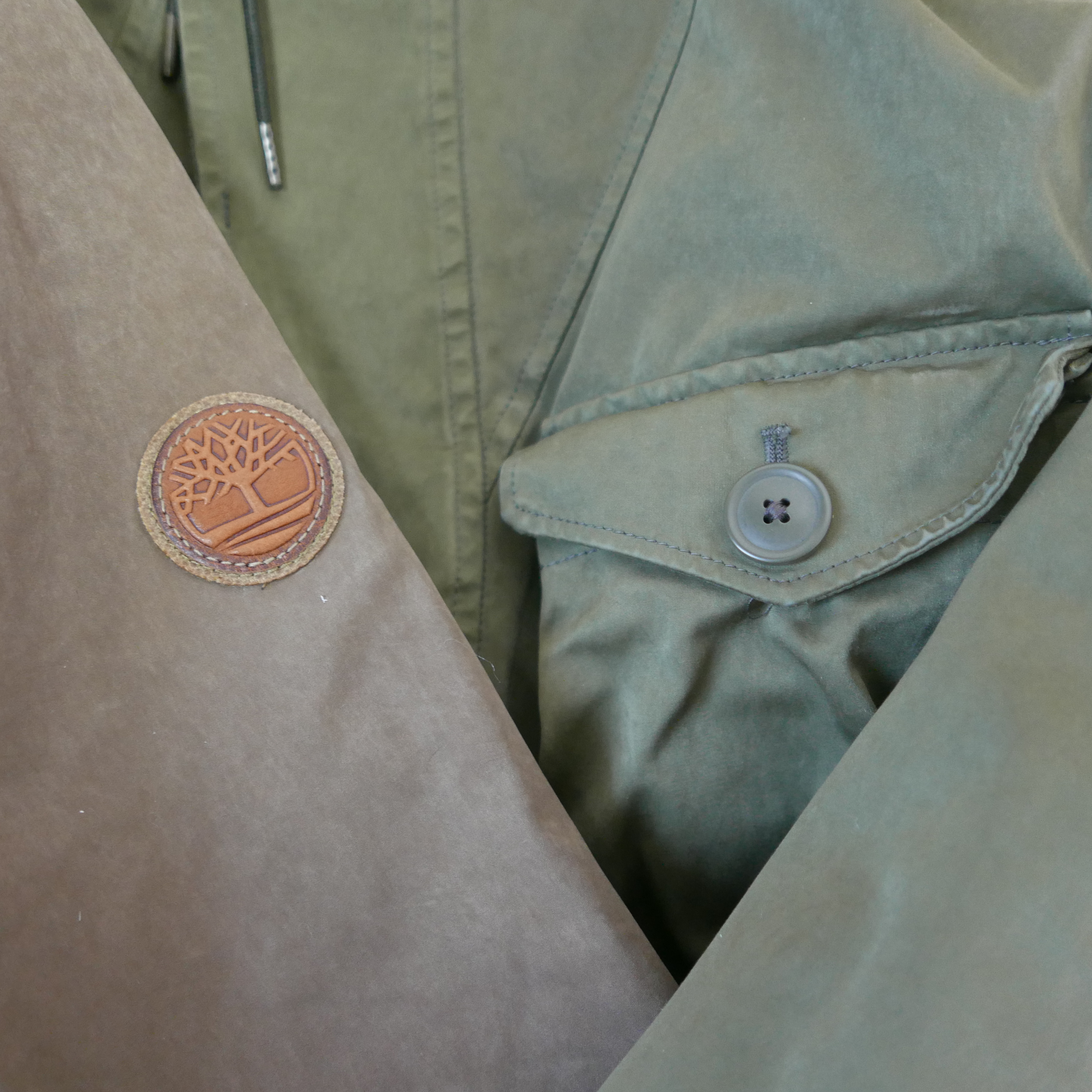 I feel like no timberlands patch would have made this jacket so much better. 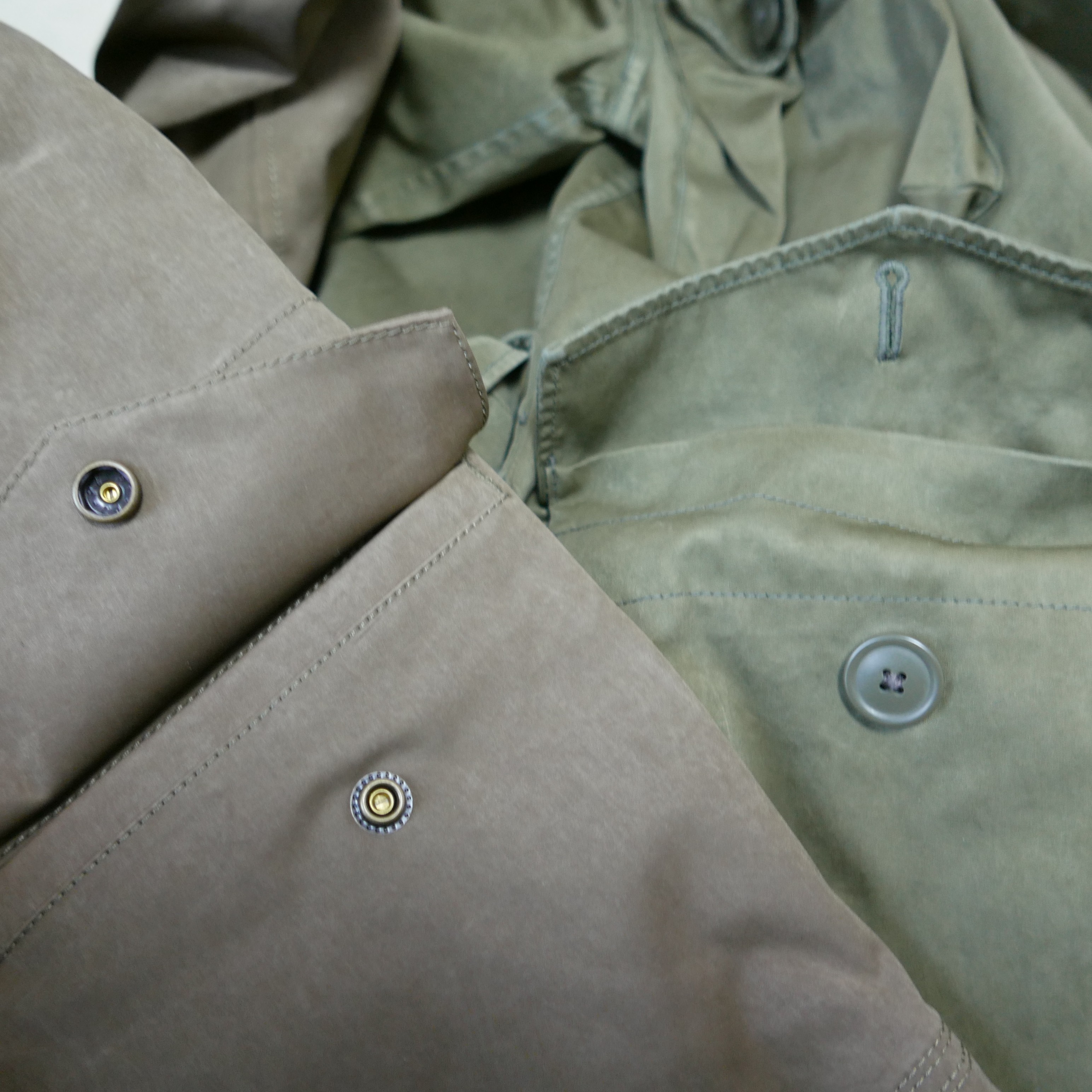 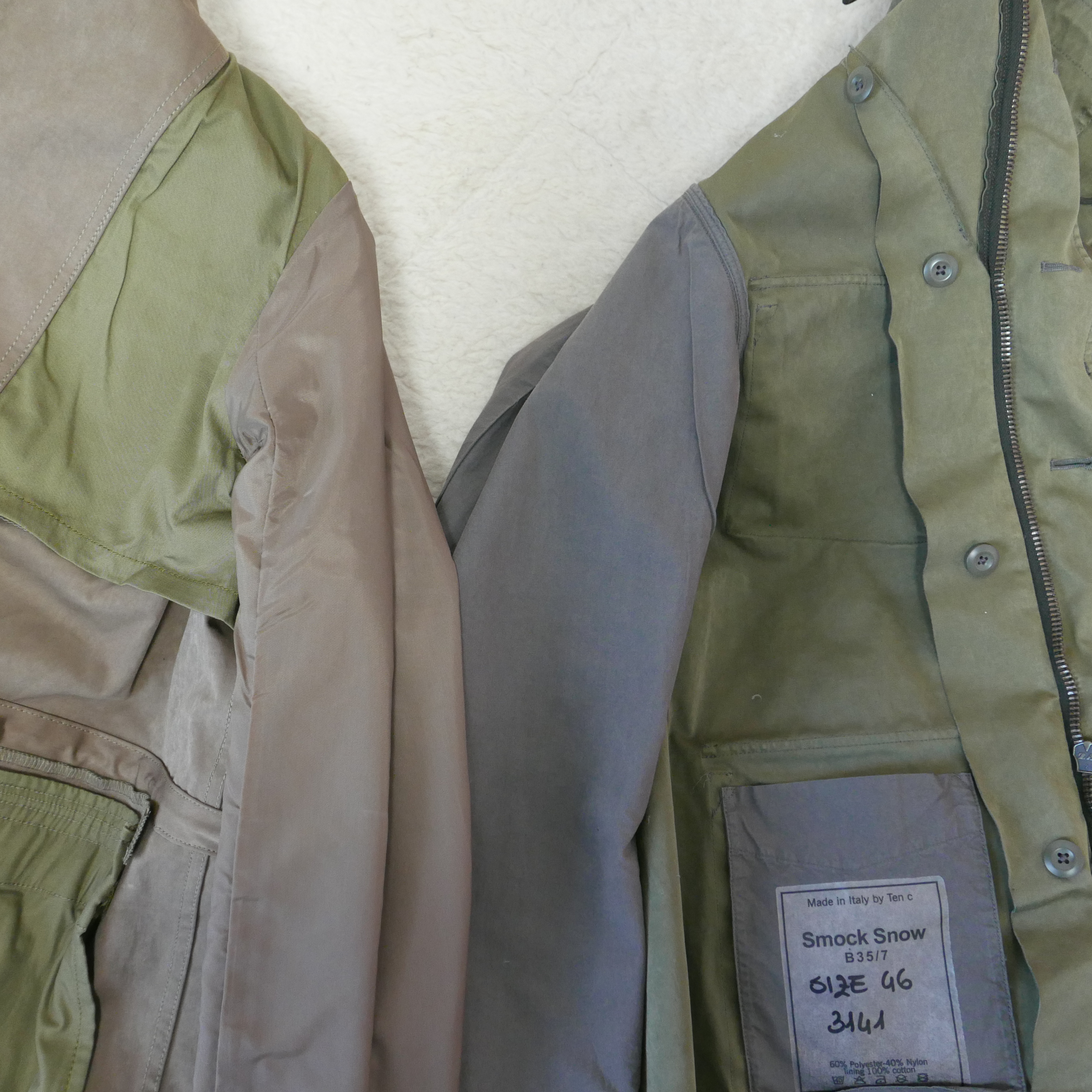 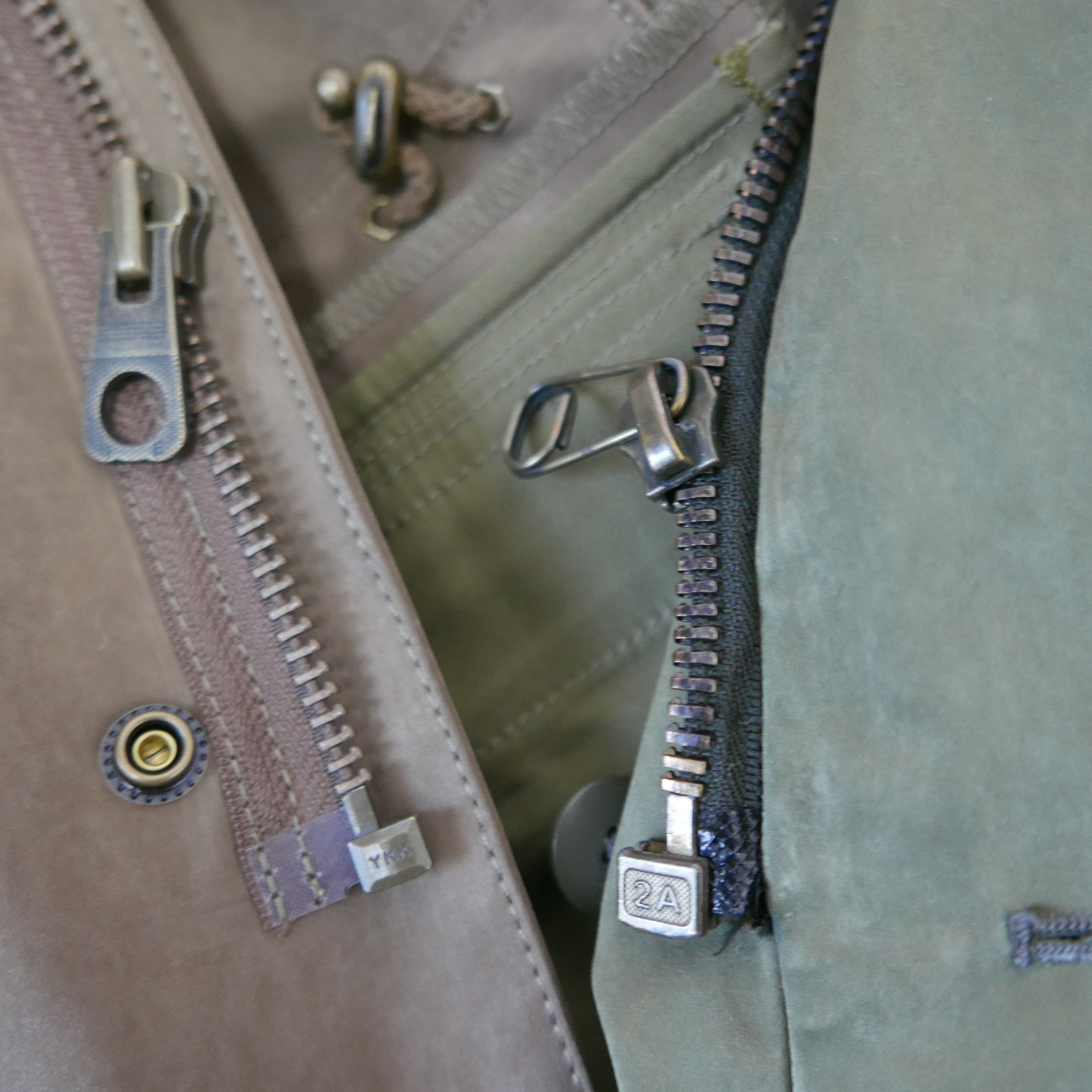 zipper and buttons are better sewn in on Timberlands, although I question their decision for the zipper pull being placed on the right side. Not cool. 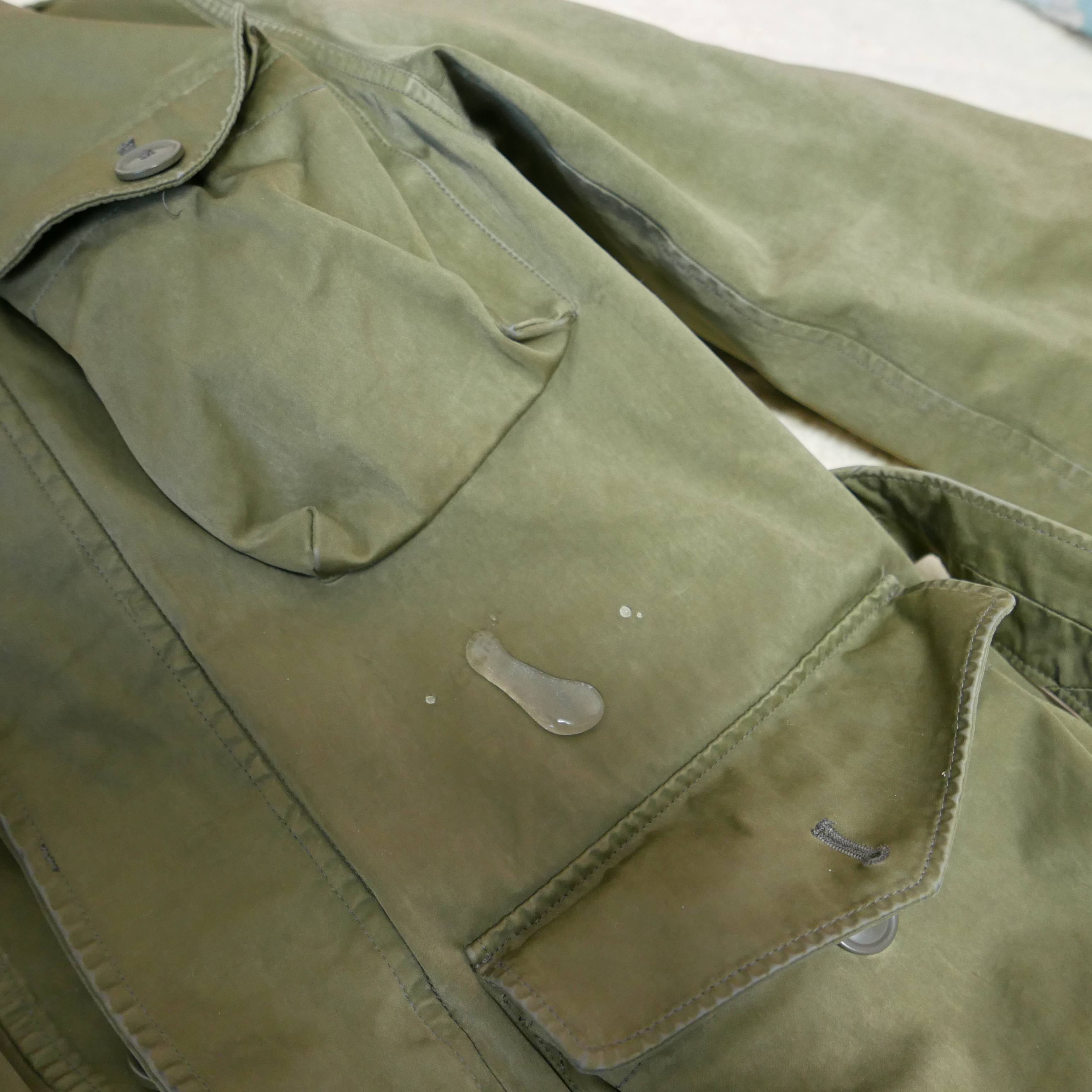 Just as hydrophobic as TEN C 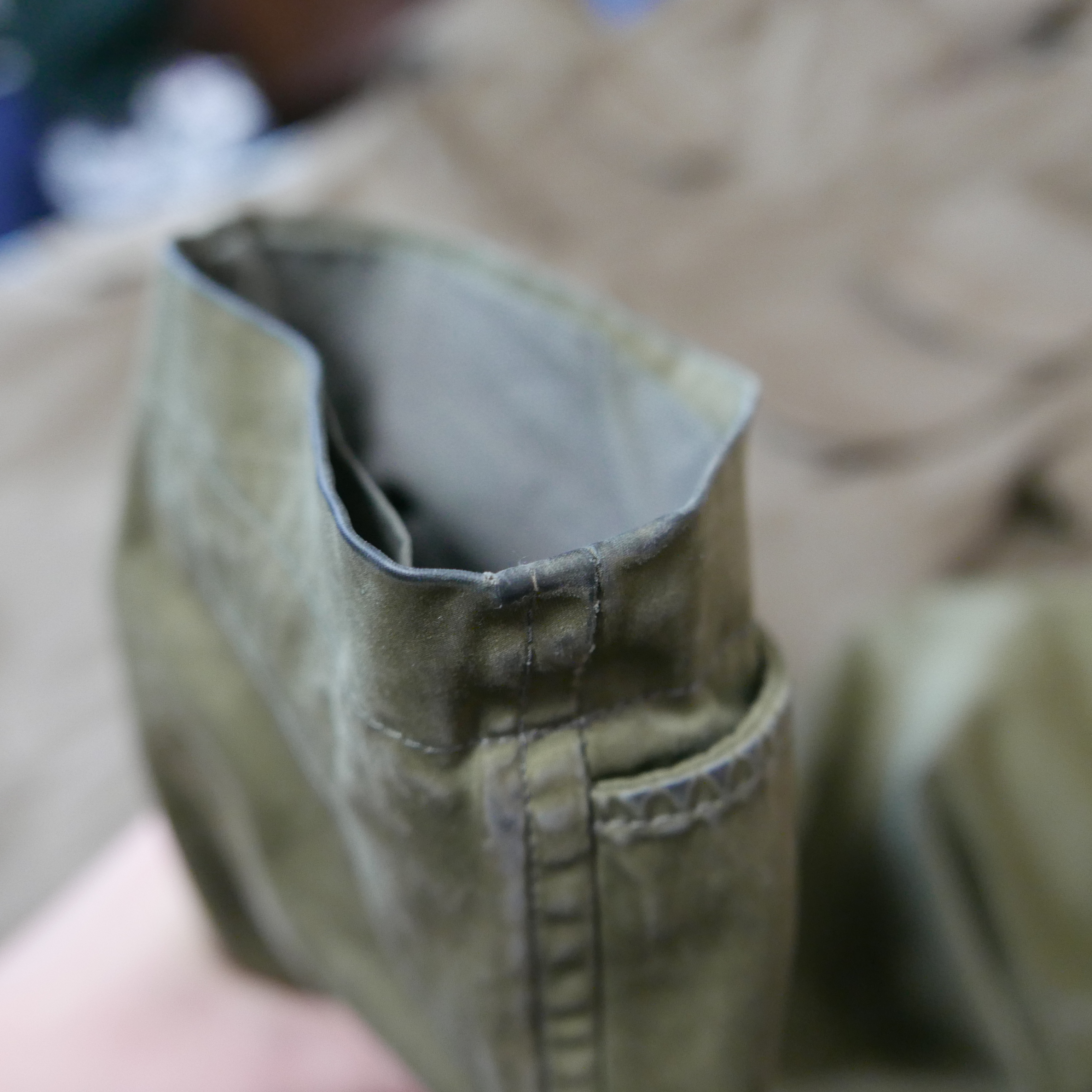 Here is an extra pic showing how the OJJ fabric ages. As the fabric thins out it fades to lighter tone then reveals matt black flesh. Pretty cool but not so much because then it starts to fray.
Definitely akin to denim because armpit and and cuffs begin to fade first.
Last edited: Jan 31, 2017