Chocsosa and I collaborated over the past few days and came up with a theme that we felt would get a lot of participation and creative entries. Sneakers appear to be a decidedly “SW&D” item that clearly segregates us from the other side of the forum. However, I am pretty sure almost everyone on styleforum.net owns at least one pair of sneakers, if only for exercise. It is also summer in the Northern hemisphere right now where many of SW&D’s posters live so we figured that it would be a practical theme as well.

I often see people posting in the Recent Purchases, Baller Sneakers and Nike threads about different shoes they have bought, but I rarely see some of the more flamboyant designs worn in the WAYWT thread. Now is the time to break out your favourite pair of Jordans, show off your Rick Owens ensemble and demonstrate how creative you can be with a pair of Nikes and some gym clothes. I’m keen to see the new iteration of the Converse All-Stars that I know a few of you have purchased.

Some thoughts: While a leather jacket, some jeans and a pair of GATS can certainly look good, I’m also really interested to see what people can do in activewear and streetwear styles. Slip-on, white Vans are cool but they aren’t typically the focal point in an outfit either. That being said, any sneaker or trainer outfit is admissible, and the masses will decide which way the vote swings.

I compiled a few recent outfits posted in the WAYWT thread that I considered to suit the theme and general level of quality that receives votes in these threads. 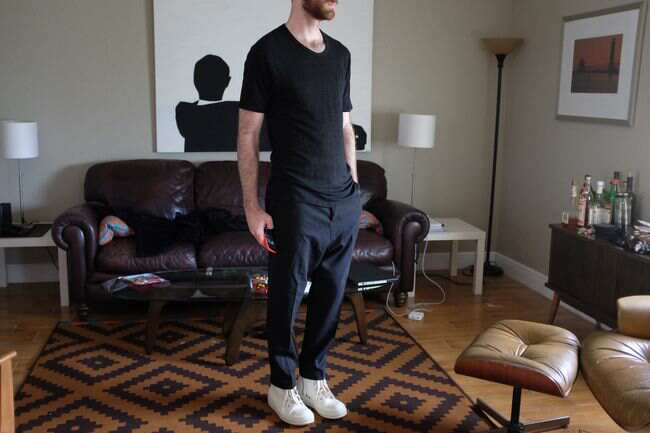 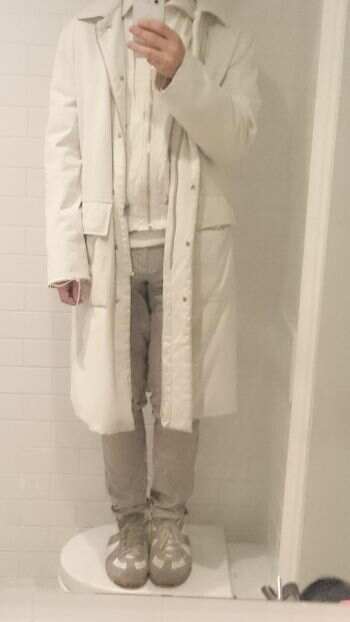 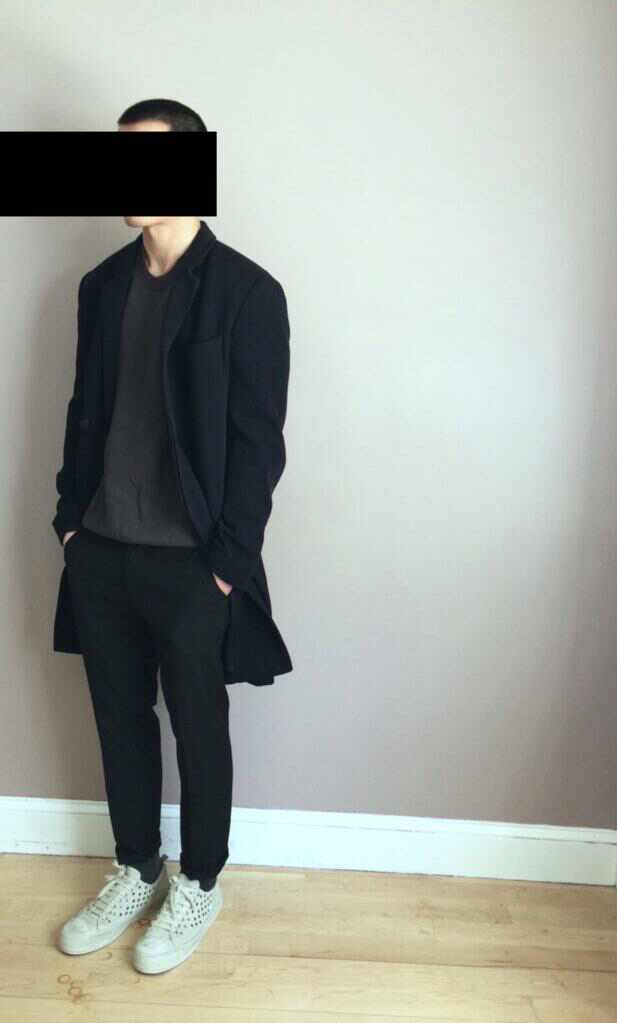 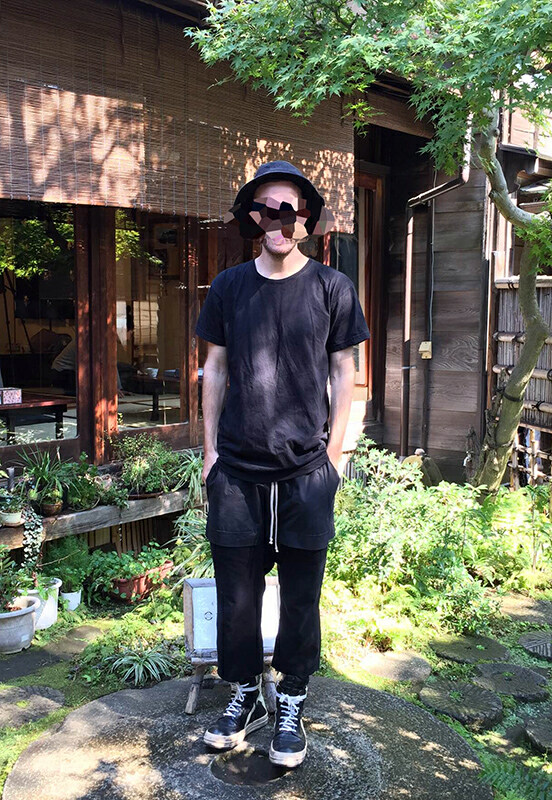 Good luck and I hope to see a lot of participation, especially from newbies. The SW&D Challenge threads were the reason I started posting on styleforum.net. I think they are unique amongst men’s fashion forums and a great place to start learning and developing your style.
Last edited: Aug 1, 2015
shellzine.net

I will start it off first.. I may submit more... we'll have to see...Im usually more on the CM side of things..Hey guys...Im Chocsosa (sosa or choc for short) Im 6"9 and wear a size 15 shoe.. so finding stuff that fits is pretty hard..this is what I wore last weekend.. 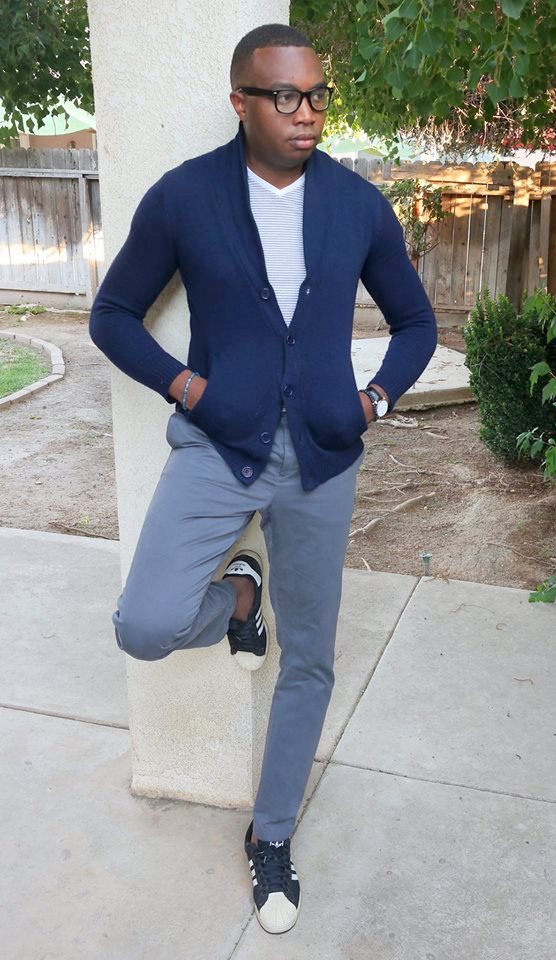 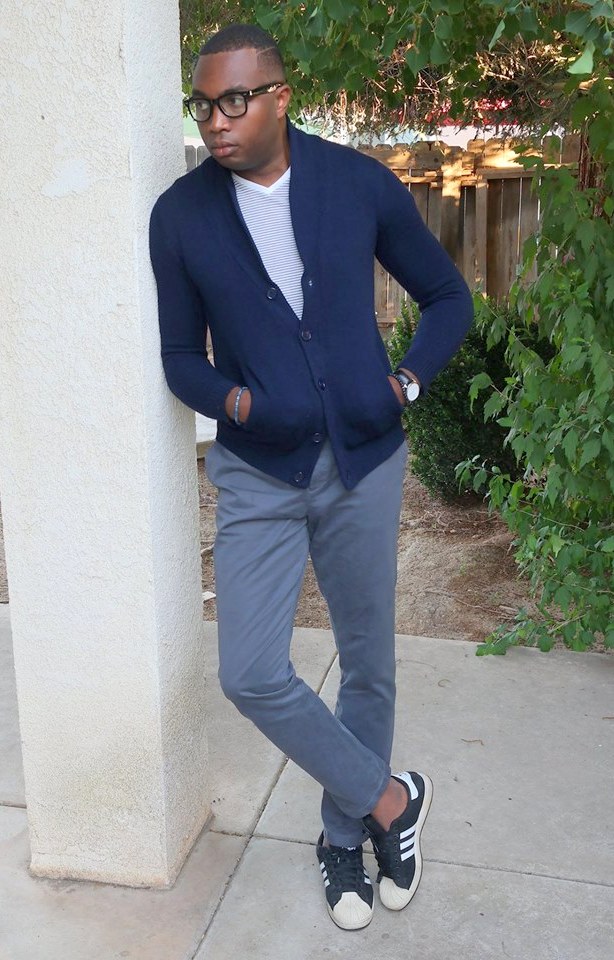 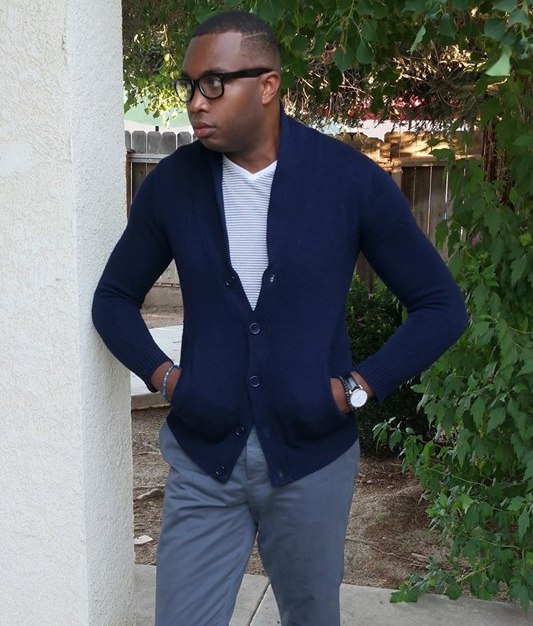 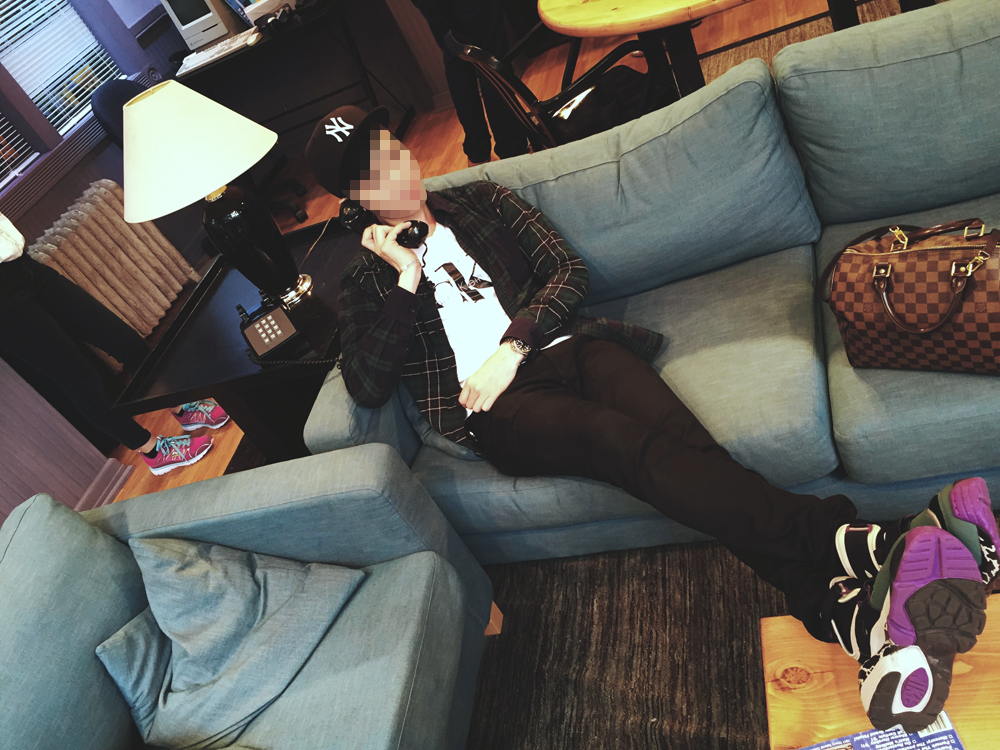 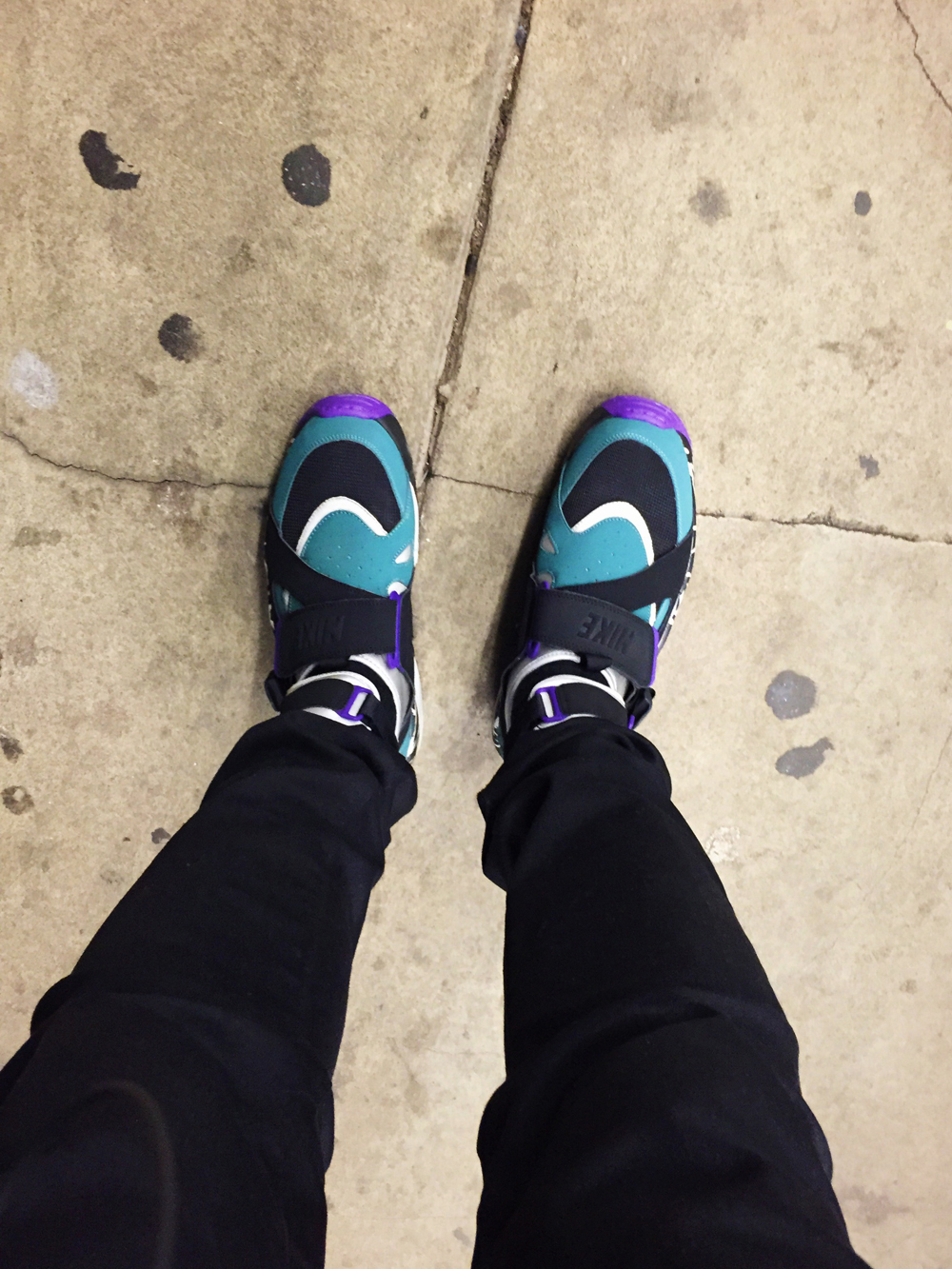 I do hope you´re talking to Uncle Leo.
kunk75 "please refrain from logical observations so we can discuss marxist ideals while buying 2k fingerlessgloves"

^ Air Carnivores are dope. Great idea for a challenge, hope to see some weird, old and baller sneaks (or some combination of the three!)

These are pretty tame but I wanted to participate. 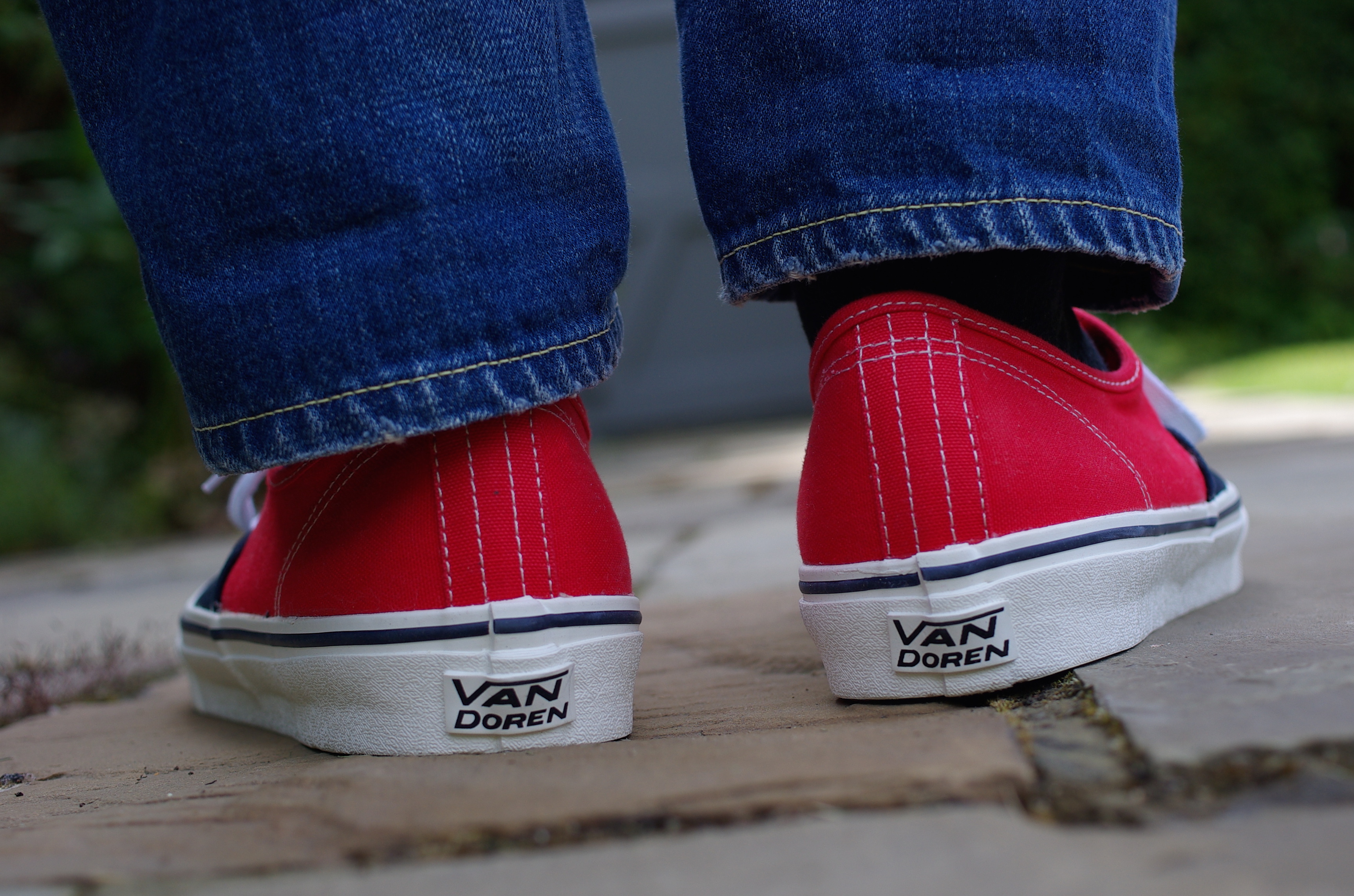 I guess its a Styleforum trademark to obsess over small details that most people wouldn't notice or care about. Or questing for the right iteration of something. I wanted Vans, but the regular sort just didn't hit the spot, which is where these come in.

They are a Japan-only model made for Beams that, rather like Converse's 1970s all star, try to recreate the look of late-60s and early '70s Vans. They have a different slimmer shape, heel cushioning (!), and period correct four lines of heel stitching not seen on modern day Authentics, as well as the 'Van Doren' logo. It all adds up to a shoe that feels slightly more special. They even come with a shoebox styled after the boxes from the period, which is a fairly insignificant, but nice, touch. 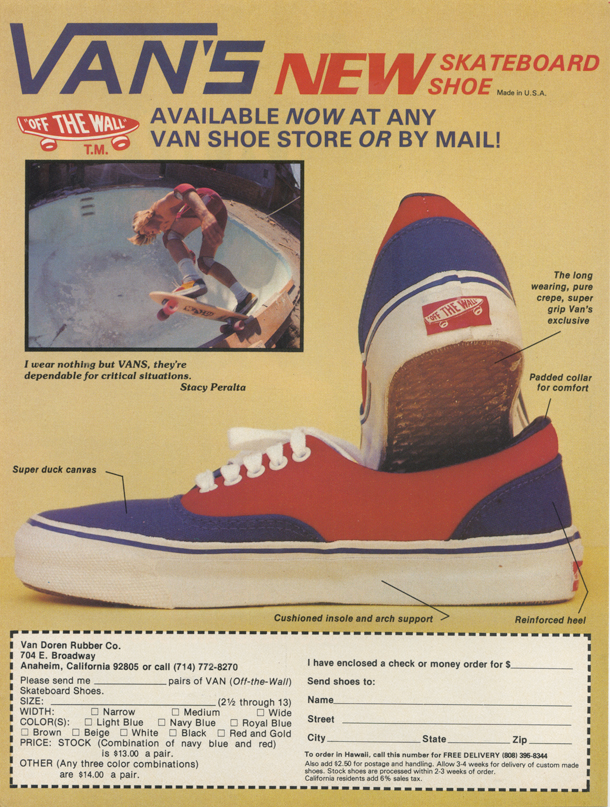 A genuine pair of late-1960s Vans Authentics, and an advert from the 1970s showing the Peralta endorsed blue/red Era.​

Although the most iconic color for Authentics is probably the plain navy, I liked the red / navy combo a lot, and its reminiscent of the two-tone Vans Era worn by the likes of Stacey Peralta and Tony Alva in the late 70s.

At some point I'd quite like to get an actual vintage pair in good condition, but given I'm a popular size I'm not optimistic, so these are probably as close as I'll get.

Keeping this on the front page. Ends this weekend. Thanks. Just started gym again after a 4 month break, so hope to get them a bit more pumped for the summer.

Wille: cool sneakers and backdrop. Is that like a tour you can do or something? Loved that show.
Lorcan: Also really cool, sneakers match the bag but not too much that it looks overly intentional.
shellzine.net

Will try to get a pic of an outfit with my Eytys (bright neon blue should count as flamboyant right?) but until then I might as well x-post this.
This has been my summer uniform for whenever the temperature is +20, really happy with the look considering it's mainly put together from a comfort-viewpoint. That's great, Snowman. This was the kind of outfit I had in mind when imagining an ideal submission. The sneakers really stand out with their colour and they suit the clothing very well. Those pants are very interesting too.
shellzine.net

They set up the set in NYC and made it public

Day one: some guy tried to pull a Kramer move and broke the door.

Rais said:
That's great, Snowman. This was the kind of outfit I had in mind when imagining an ideal submission. The sneakers really stand out with their colour and they suit the clothing very well. Those pants are very interesting too.
Click to expand...