IHaveNoNiceClothes said:
Oh and I know this sounds petty and probably irrational, but is it normal to be put off by a brand's ads? Something about the way they depicted the men and women gave me the impression that I am not their target market and it's not the "vibe" I want to give off. That's probably the primary reason why I haven't been really on top of this brand.. which is actually kind of dumb now that I think about it.
Click to expand...

I don’t think that’s dumb at all. Their ads are designed to reflect their “vibe” as you term it and if it doesn’t fit with who you are you probably won’t be happy with them. They might be a good cut and decent quality but still not be “you” if that makes sense.

Red Fleece does have a bit of a preppy feel but I think it replaced the old University line which was also a bit preppy. B.B. helped invent preppy when they had stores st the Ivy League schools

What about Ted Baker's womens line?
http://www.tedbaker.com/us/Womens/Clothing/Suits/c/womens_suits
I

Thank you for this! I didn't know that they had women's professional wear. My local Nordstroms stocks what I would term "wedding guest/fancy garden party dresses" from Ted Baker. Not exactly office wear, but also not exactly slinky cocktail or dinner party attire either. I've always have loved their designs, especially floral patterns. At a quick glance, I love what I'm seeing and prices are not as high as I would have expected. Will definitely take a look.

Edit: A little disappointed that their offerings (at least all the ones that I clicked on) appear to be made of primarily synthetic materials. I am in love with the scalloped edges, so may order a blazer anyways.

Edit2: There is one wool blazer.

Edit2: I was about to buy the shit out of that wool blazer, but noticed that (extremely annoyingly) the matching dress pants to the wool blazer has a weird front notch at the bottom of the legs. I'm not the most trendy person and this irritates me unreasonably.

There have certainly been a number of SF posters who have expressed discomfort over SuitSupply's current and previous marketing campaigns. Personally I am not a fan either, but it hasn't stopped me from purchasing a couple of items from them. It looks like SuiStudio sells their suits as separates, which is something that SuitSupply does not do!
I

breakaway01 said:
Personally I am not a fan either, but it hasn't stopped me from purchasing a couple of items from them.
Click to expand...

You're right. Beggars cannot be choosers, and I am definitely a beggar in terms of flailing around for suitable women's attire. I am motivated to try them again

I took a look again at their website over lunch and recalled what was the issue that I had with their pants:

Scroll down and take a look at the video of the model wearing the grey suit. I had the same bunching in the crotch area even when I changed the sizes (4R and 6R). And those creases don't go away after even when I stand straight, which makes for a very unattractive look throughout the day. Is it a hip issue? Should I go up to 8? I'd love to figure that out before I order something again.
Last edited: Mar 14, 2018

Yes, it looks like the horizontal lines are caused by excessive tightness across the hips. You could consider going up one more size so that the hips fit and then having the trousers altered to take in the waist. I know that many women are not used to having tailored clothes altered, but IMO this is often necessary for off the rack clothing and well worth the trouble.
I

I contacted Suistudio yesterday evening and had the following conversation with their customer service. I'm very impressed with the promptness of their responses although I remain a little confused about the proper material (is wool better than mohair & wool blend? Does the mill where the wool was made matter? why is black the best?):

I'm interested in purchasing some single breasted women's suits. I looked at your collections available and had some question about the different materials. I'm looking for something with a studier fabric and preferably wrinkle resistant. Can you tell me about these materials and which would be best suited for me?

Also, if it makes a difference, I am constantly cold in my office no matter the time of year. I've been looking at the following suits, can you tell me where they were made?

Thank you for the information and I would be happy to assist! I would recommend a pure wool for what you are looking for, but due note that the fabric can crease but it is easy to steam out and since you are looking at darker colors it won't be too noticeable. The different mills that the fabrics come from may have a different color or weave and we just like to indicate where everything is coming from. We do have a few suits that are made from our pure wool traveller fabric which is wrinkle resistant and I have linked to those here. I personally have the first option, the cameron grey, which has a slight hounds tooth print and I love it!

Let me know what you think!
Click to expand...

Thank you for the link, however, the only suit in the Ceruti wool that you linked appears to be in light grey. I would prefer solid black, navy, and charcoal.

I guess the most important thing for me is that I like a heavier, sturdier fabric - something that lasts well with daily wear.

Of the ones I mentioned, which are likely to satisfy this?
Click to expand...

Yes I would recommend any of the pure wool options as those would be great for year-long wear and be durable! I always recommend a black to start out with since its easy to mix an match. Would you like me to set up an order for you?
Click to expand...

All of the SuitSupply suits are made in China, though that shouldn't necessarily put you off. The quality of the construction is really quite good for the price point.

Fabric is a very long discussion as you can imagine. There is a huge thread on SF just on cloth. Yes, the mill does matter, but VBC (as an example) makes a wide variety of fabrics at different price points (and quality). It is very likely that these fabrics were made specially for Suitsupply/SuiStudio at a negotiated price point. In general, go for 100% wool if you are not sure. "Traveler" fabrics are usually made of high-twist yarns that add wrinkle resistance. Wool/mohair blends also tend to be wrinkle-resistant but at high mohair content the fabric can have a bit of a sheen (whether that is desirable is up to you).
I

Update: I still have not yet received my order from BB yet. I checked today and apparently they haven't even shipped it yet. The Cotton Pique dress is ETA April 7... sigh.

In other news, they updated their inventory to include a solid navy zac posen designed suit (with *GASP* matching slim fit pants AND skirt!!!). Needless to say I'm over the moon.

Update (review of the solid navy Zac Posen suit mentioned in the post above, which I was REALLY REALLY excited about):

My local BB had the blazer and the pants in stock, although only the pants in my size, blazer one size smaller. I went over during lunch to check it out. I took some pictures, both items are a matching dark solid navy, although the lighting makes it appear black at times.

So, first some confusion over whether I was being shown the right items. The online page clearly says it's made in Portugal, but both tags on the pants and blazer say "Made in China." I had the sales person helping me double check, and he said it was an error with their website.

The pants actually fit decently and most importantly were a tapered slim pant, rather than BB's 2-3 years ago which had the dreaded (for me at least) bootcut dress pants. Seriously. I'm an office worker not a cowboy, I do not need the extra flare.

But I digress - here is a picture of the seams, which look more like the seams on my Ann Taylor pants (which I happened to be wearing today) rather than my Paul Stuart pants, which do not have a single loose thread anywhere. 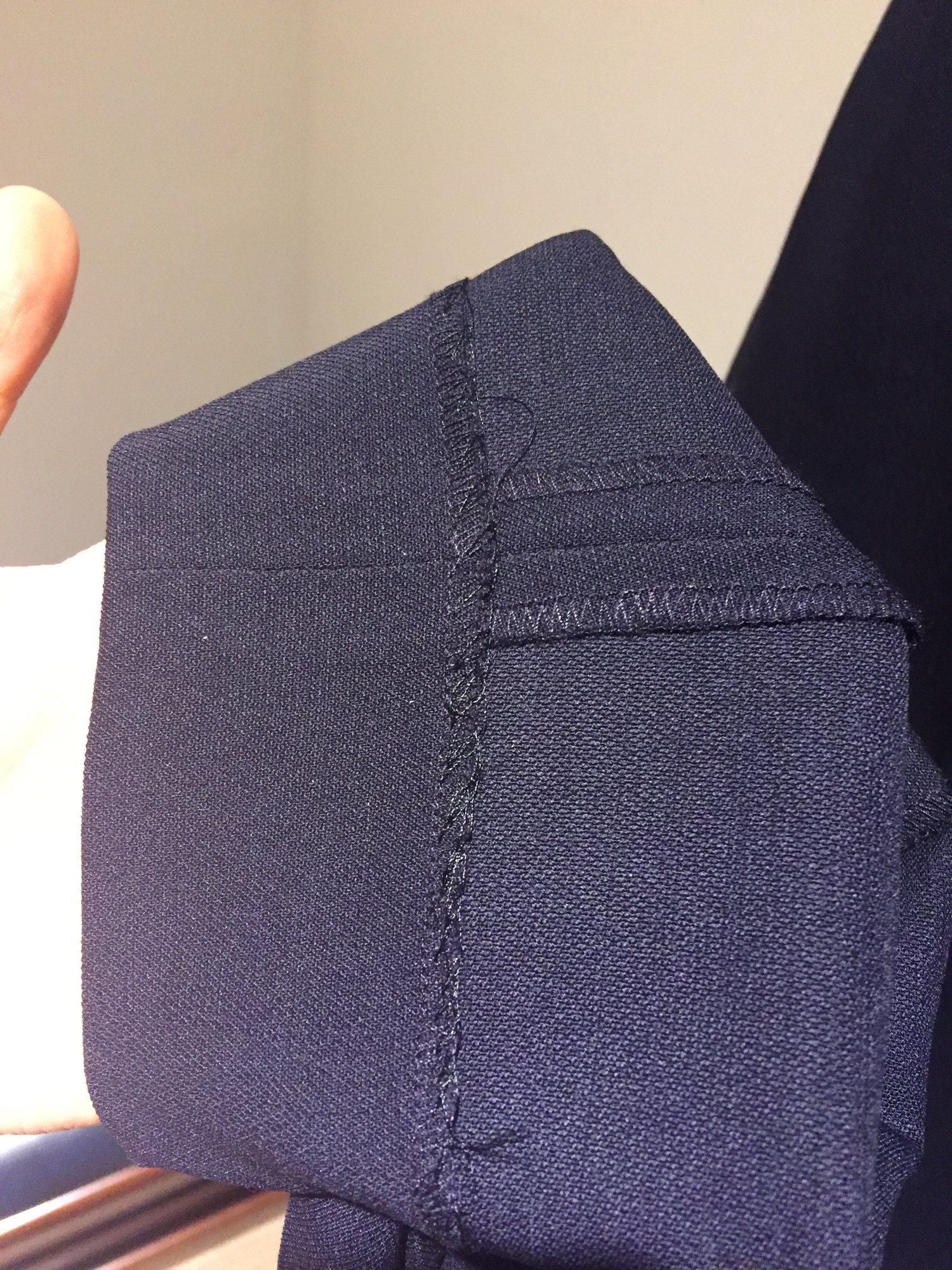 The blazer (again, this is actually a dark navy, but the dressing room had horribly harsh overhead lighting that emphasized shadows and made pictures hard to take).

Coming off the rack it looked a little.. not exactly "worn" but something about both the fabric and stitching just didn't look as sleek as some of BB's offers do. Maybe it's the drape? Type of fabric? I don't know, it just didn't lie flat even on the hanger, and the stitching on the lapels looked slightly puckered/wrinkly. It looked even worse after I tried it on (anyways, it was a little small so I didn't take pictures of it on me). See comparison below with the BB Loro Piana two button blazer.

The blazer is fully lined and the seams look much better than the pants, no loose threads etc. 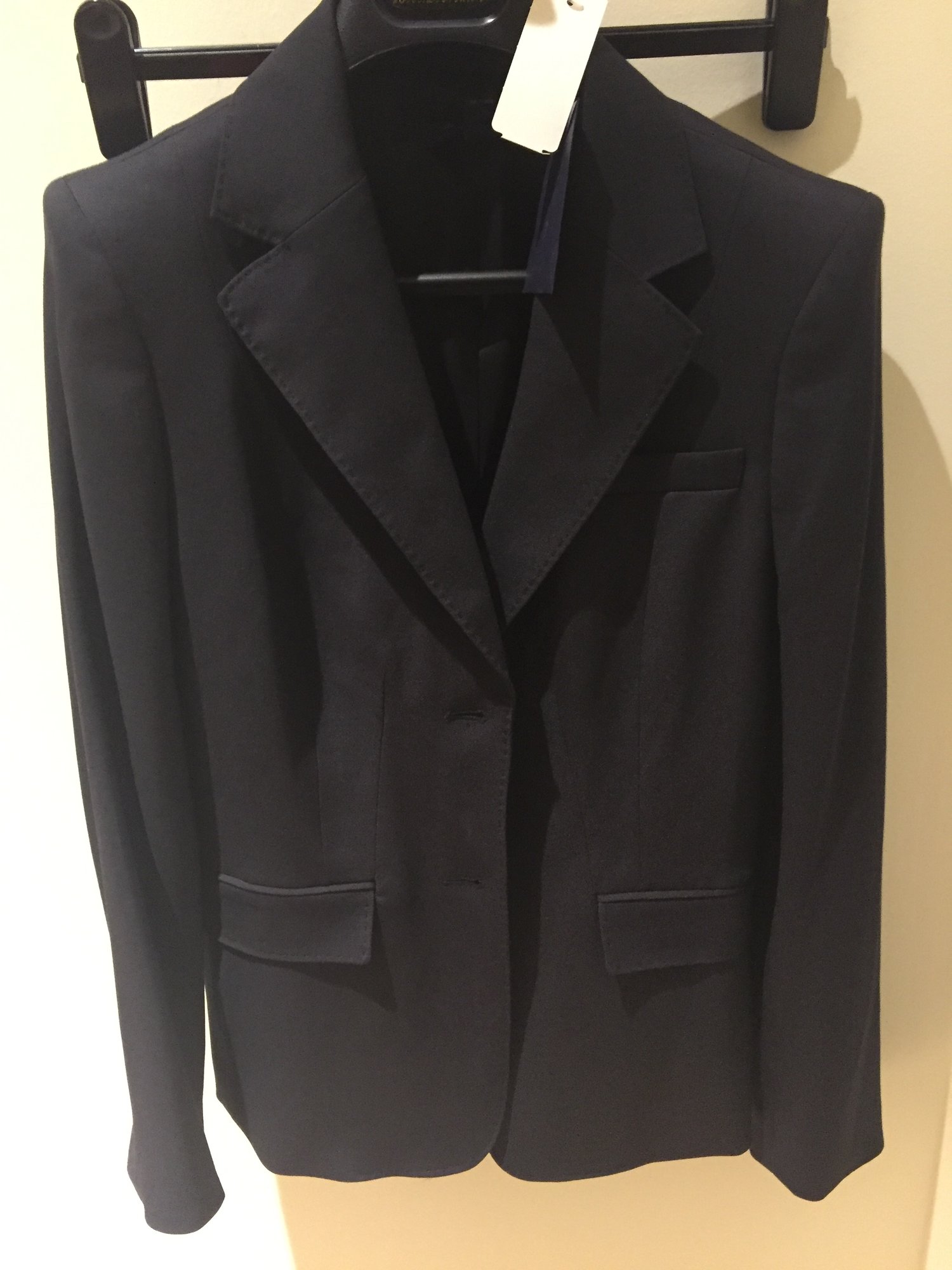 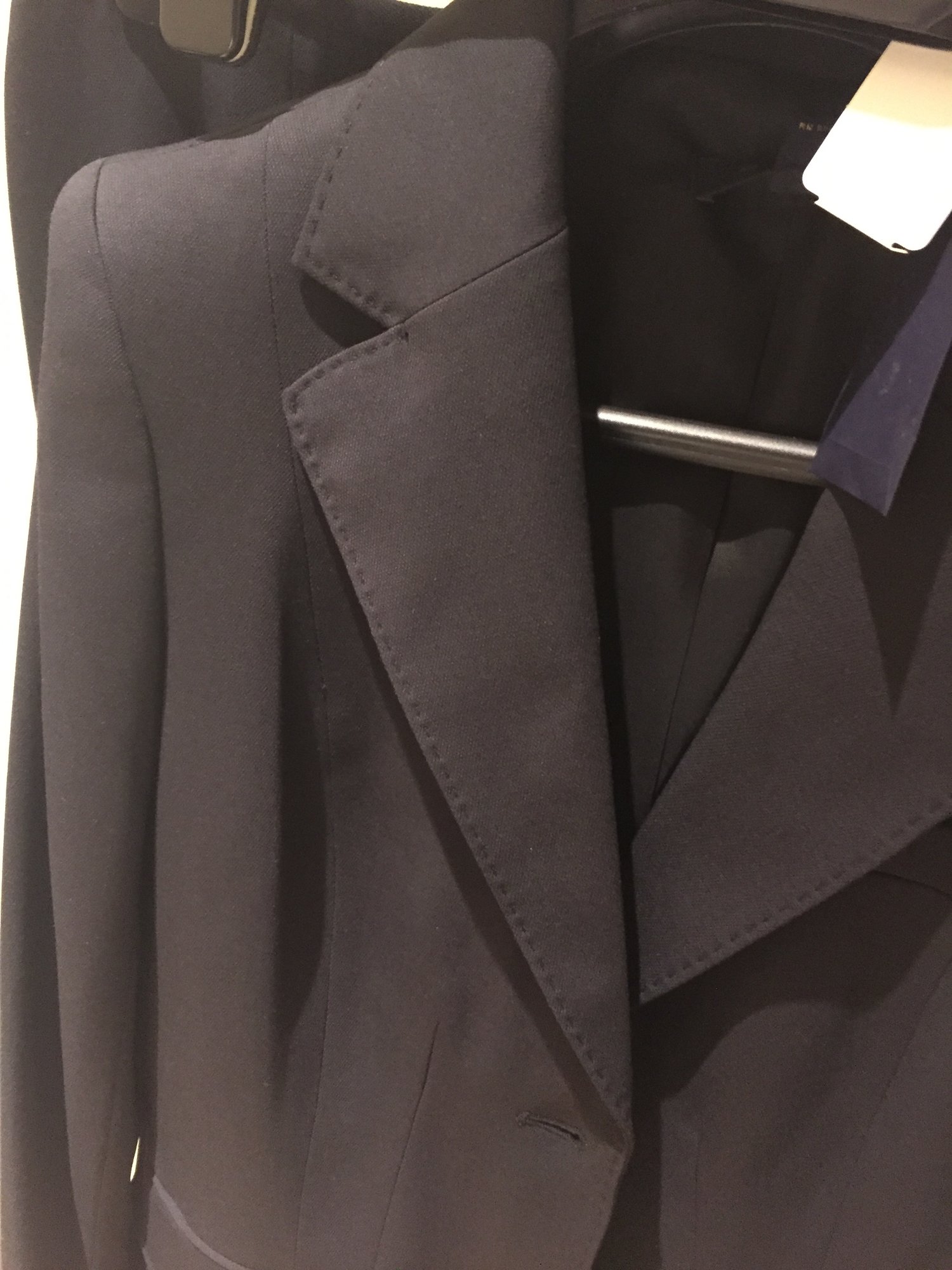 For comparison, the BB Loro Piana Two Button Wool Blazer. Admittedly more expensive by $100. To be fair to both, I also selected one size smaller than what I usually wear. After some trying out and manipulation to take photos, I put it back on the hanger and snapped this photo. Even though it fit me more snugly and I exposed it to greater stress and movement than the other one, as you can see, it looks much more sleek - flaps stay down and fairly even. It also has this stitching on the lapels, but the stitching doesn't look puckered at all.

I would definitely purchase this latter blazer if I could find corresponding pants. The ones hanging by it at the store that looked like the proper matching pants were the dreaded "boot cut" (again, seriously?!") 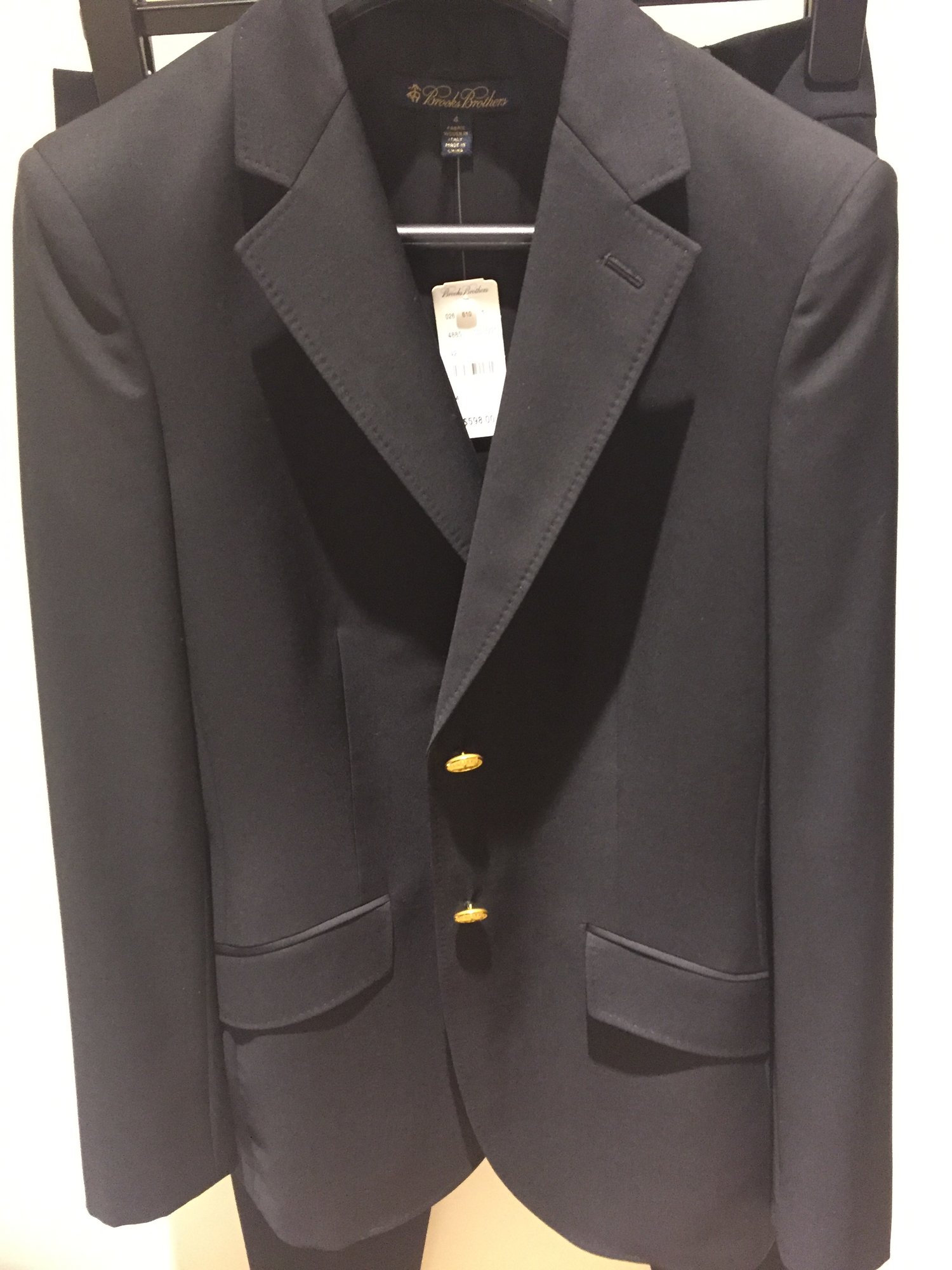 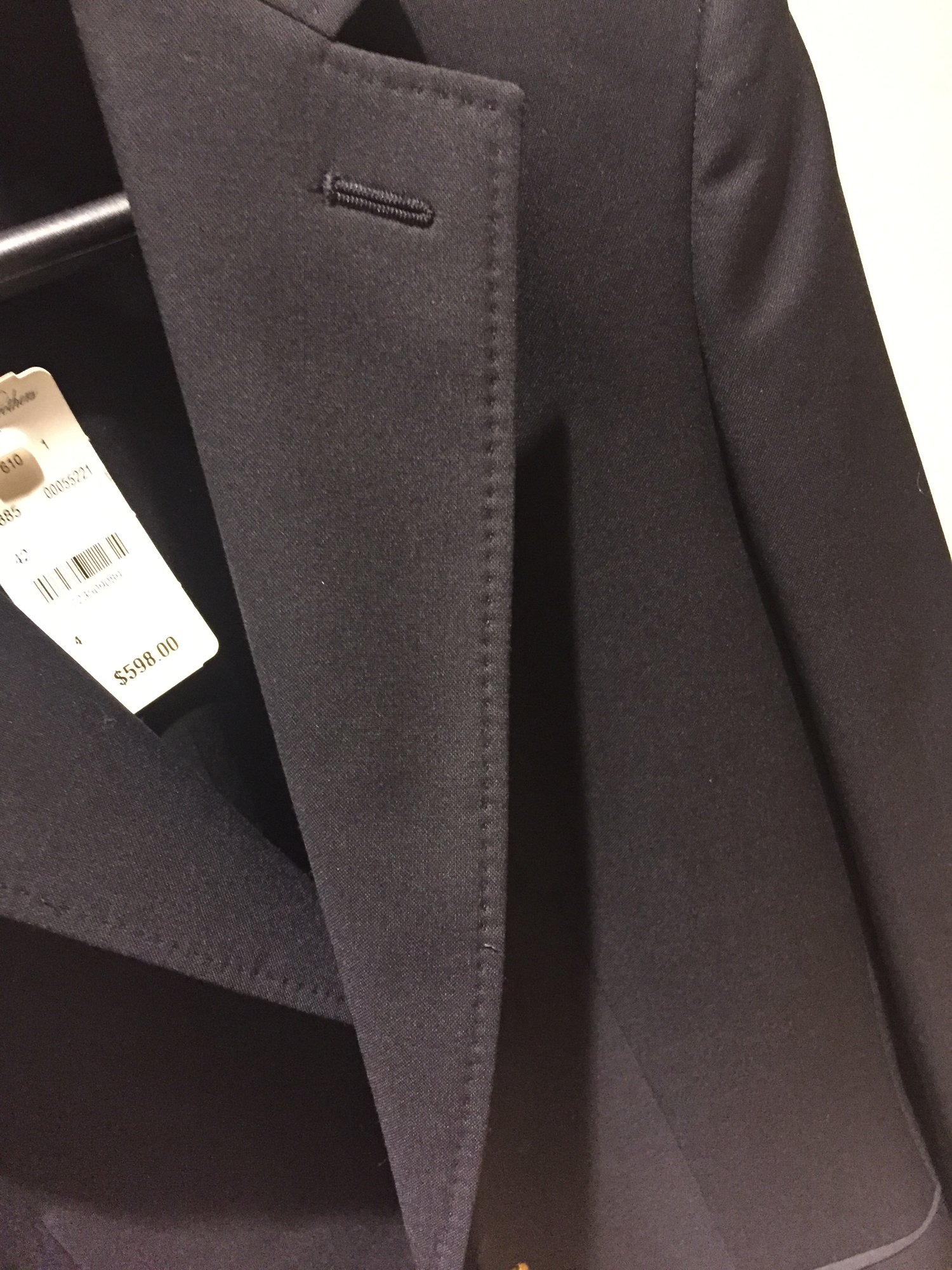 Ah the BB Loro Piana Wool Blazer. I have four or five of them, they are easily my favorites by far, but I wear them with charcoal or gray wool trousers or even white linen or cotton. I have never worn them with matching pants though but I suppose for women it's different. Most often I wear with a mid gray flannel pant, white button down shirt, black loafers, and a repp tie.
I

jaxenro said:
Ah the BB Loro Piana Wool Blazer.... I have never worn them with matching pants though but I suppose for women it's different.
Click to expand...

I can never quite figure out the mix and match - actually I don't even know which jackets are clearly for matching suits and which ones are more flexible unless they are clearly a sports jacket or hacking jacket with a loud pattern or in some unusual color.

My current goal is to find two matching suits of navy and charcoal, or navy and black. Will try suisupply again and an online women's professional clothing store called "Of Mercer" next. The latter looks so promising that I'm afraid to get my hopes up in case it's all some clever marketing scheme

On a men’s metal button navy blazer you don’t wear navy or black pants I don’t know about a women’s. In fact I don’t think they make matching pants unless one is actually in the navy. But it’s sort of a classic men’s look.