I've actually since gotten rid of all my crew neck white tshirts and only have v neck ones now. As I said, this was a couple of years ago.

And the top heavy look is actually just me. lol I am short and stocky with fairly broad shoulders. I'm 5'7" and around 200 lbs in that picture. I agree that the sleeves could be shorted a little but I actually don't care for having much shirt sleeve show. So, compared to most of you I tend to wear mine a little longer.

Also, keep in mind that I was on a cruise so I had a tuncated supply of clothes. I had brough the jacket to wear with khakis for dinner and just threw it on with the jeans because we were going to be walking on the deck with the breeze.

bourbonbasted said:
I fear too often people try to dress denim up too much (with ties or oxfords, etc). It seems many people I see out think jeans are the same thing as trousers. This is a grave mistake. The key to pulling of a SC and jeans, IMO, is to remember you're one step above casual rather than one step below a suit.
Click to expand...

This, this, a thousand times, this!

Denim is rich in both color and texture, as are the best sport coats. That's why they look great together. However, people have to stop thinking of a sport coat as the equivalent of a suit.

It's also important to remember the rules of denim. A slender, well-fitted pair is non-negotiable. Anything else just looks sloppy.

To me, this is a casual wear staple.

I will wear a sport coat or blazer with jeans for grocery shopping, dog walking, or any mundane daytime activity, but, as has been mentioned, far too many people try to wear it as "dress" attire. It's been over done, and proper trousers should be worn for the appropriate occasions.

Thanks SF (a new me)

bourbonbasted said:
To me it is far more important to get the cut of the jeans correct. I always wear trouser length/cut raw denim from RRL and pair it with loafers or dub monks. I fear too often people try to dress denim up too much (with ties or oxfords, etc). It seems many people I see out think jeans are the same thing as trousers. This is a grave mistake. The key to pulling of a SC and jeans, IMO, is to remember you're one step above casual rather than one step below a suit.
Click to expand...

while I agree to all points noted by BourbonB, my question is about footwear. I prefer to wear blucher style brougues with SC and proper jeans. Would you consider this trying got dress it up too much? does color comes in to play? or will suede (blucher brogue/captoe, loafer) tone it down a bit? I'm asking since I am trying to fill a gap and eyeing some suedes..BTW, I dont wear tie with jeans....Thanks
==========================================


"Don't be a bitch about it. You are an ass for demanding shell while paying only for calf." (onix/April 2012)
"If you are overdress, you feel ridiculous. If you are under dress, you are ridiculous" (read it from somewhere...)

I think any kind of chukka looks good with this look personally.

I also think my darltons would look fine as well.

Thanks SF (a new me) said:
while I agree to all points noted by BourbonB, my question is about footwear. I prefer to wear blucher style brougues with SC and proper jeans. Would you consider this trying got dress it up too much? does color comes in to play? or will suede (blucher brogue/captoe, loafer) tone it down a bit? I'm asking since I am trying to fill a gap and eyeing some suedes..BTW, I dont wear tie with jeans....Thanks
Click to expand...

I think brogues are doable, so long as they are darker and have more of a patina/are beat up. I don't much care for polished shoes with jeans (and I especially detest mirror polishes with jeans).

IMO any suede works well. The raw and deep texture of the denim (as touched on above by Sazerac) lends itself well to the richness of suede. I like both sand and chocolate suede and as Achilles_ touched on, you can't go wrong with a chukka.

Personally my usual rotation is a pair of MTO AE Kenwoods in cigar shell, a pair of suede Gucci horsebit slipper/loafers in sand suede, a pair of older EG calf tassels I wear as beaters and MTO AS Ramseys in dark chocolate calf if I want to class things up a bit.
Last edited: Sep 29, 2011
“I have always lived violently, drunk hugely, eaten too much or not at all, slept around the clock or missed two nights of sleeping, worked too hard and too long in glory, or slobbed for a time in utter laziness. I’ve lifted, pulled, chopped, climbed, made love with joy and taken my hangovers as a consequence, not as a punishment.”

This topic has been discussed ad nauseam. My take is basically: Tailored jacket = tailored pants. Casual jacket = casual pants. So, to me denim works better with field type jackets in rough fabrics. Or a sport coat with casual sport elements to it like patches and bellow pockets or something. I can't stand a smooth worsted "suit jacket" with jeans, esp. bad jeans. And leave the tie at home.

Most of the outfits posted in this thread do not work for me because they take a fully dressy outfit and just add jeans. Why not stick with slacks if you won't acknowledge the nature of the material/item you're wearing. I don't think its horrible or anything, just not in need of jeans.

Not one of these looks wouldn't be improved by slim fitting khaki's/cotton pants.


Still... I like a few of these and wear something similar pretty often. 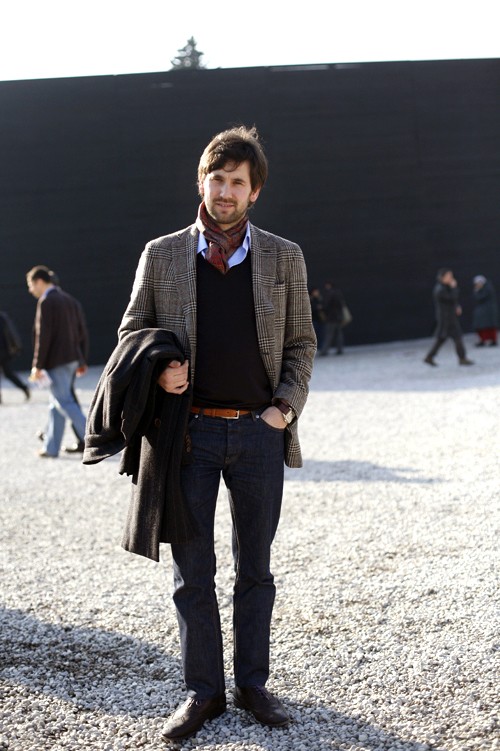 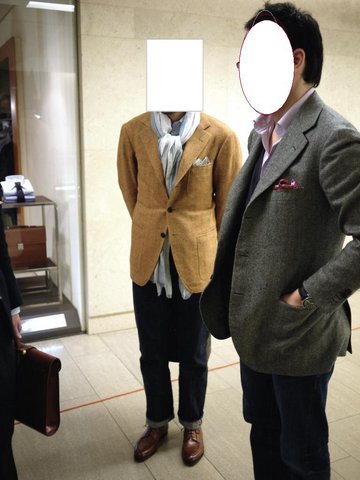 Ain't gonna lie. I'm doing it right this second, and I don't care what anyone things, I think it looks awesome.

But like Parker said: keep the fabrics casual. The SC's a brown-olive tweedy windowpane with a ticket pocket. I wouldn't try to rock a charcoal SC with jetted pockets, say.
Last edited: Sep 29, 2011

Do it all the time. This guy is my idol. 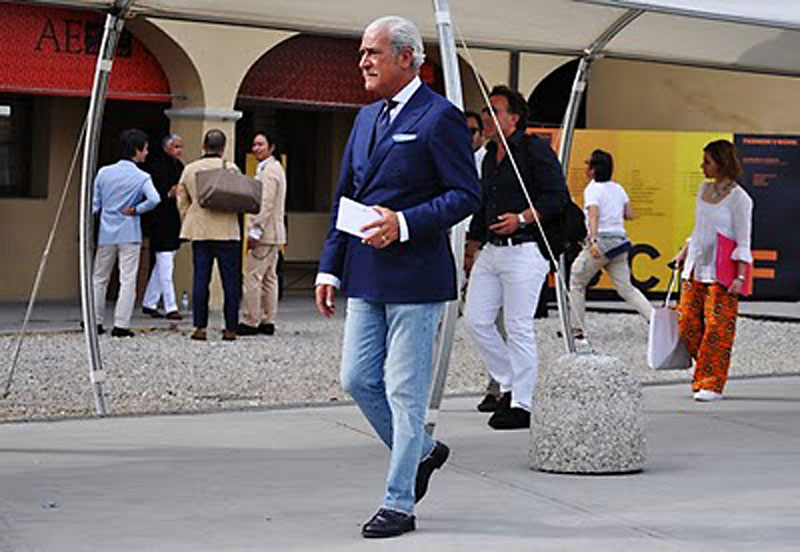 I have other jackets that I sometimes wear with jeans as well, and I hope I look as good as this Milanese gentleman.

To me, denim and a sports coat is the same level of dressiness as slacks with neither jacket nor tie (assuming shirt and shoes are of similar formality). Adding a tie (or vest/sweater/pocket square) does nothing for formality - wear one if you wish but recognize that it's a stylistic accessory only.

-make sure both fit impeccably
-jeans should be at least as dark as the jacket, a black jacket being the sole exception
-jacket should be two-button, single breasted only (and at least 80% of the time, notch lapel)
-stripes are only OK if it's a really thick chalk stripe with an almost fuzzy-looking flannel material (even if it is from a suit, it's a less formal suit and doesn't scream "1/2 suit")
-orphaned/borrowed suit jackets are alright if the material is sufficiently interesting (NOT the same as busy) such as a large, bold windowpane, a glen plaid or a plain fabric with a unique texture
-avoid polished oxfords; scuffed ones are great
-avoid sneakers (95% of the time, a couple good situational/stylistic exceptions)
-don't use shirts that would generally look out of place with jeans (like stuff ripped from the JAB catalog) and don't get too colorful here, solids and simple stripes/checks are best; square/tie for color
-typically avoid dark, cold colors; the whole thing should look warm, rich and inviting (certain black outfits are exception but difficult to pull off and 99% of the time avoid black/grey for the shirt)
-a Chelsea boot is (to me) ideal footwear but a slip-on or monk strap has its place as well

The overall goal is to avoid looking like a guy who bought a lot of expensive suits in the 90s and now either works for himself or whose office has gone casual so comes in wearing relaxed, too light jeans, a three-button, too-long, too-wide triple pinstripe low-notch suit coat atop typical "dad" weekend shirts such as baggy OCBDs or, worse, logo-displaying golf shirts and black New Balance or gold horse bit Ferragamos. Get as far as you can from this and you'll be fine.
Last edited: Sep 29, 2011

LA Guy said:
When in doubt, I size up. Life is too short for squished balls.
Click to expand...

Poindexter said:
Do it all the time. This guy is my idol.

I have other jackets that I sometimes wear with jeans as well, and I hope I look as good as this Milanese gentleman.
Click to expand...

Is he a Mafia godfather?
An Englishman in the People's Republic.

I'm the man in grey, I'm just the man at C&A
And I don't have a say in the war games that they play

Sazerac, LeviMay and Parker - very sensible comments!
TimelesStyle - in my opinion it is the tie (not the jacket) which does everything for formality. But that is one reason why it is incongruous in the situation you describe. I realise that on your side of the Atlantic opinions are different from mine on this point.
Last edited: Sep 30, 2011