I can’t keep up with this thread.
Has @dieworkwear posted any pictures of old J.C. Penney’s catalogues to support whatever position he is taking with respect to women’s fashion being a good starting g point for men with trained eyes?
J

dieworkwear said:
BTW, that's a wait coat, a predecessor to what we today call a polo coat.

Male polo players used to wear this as a wrap-around belted coat to stay warm between periods of play.


The design later acquired buttons and a Martingale belt.


When Antonio was the designer at Eidos, he made a navy version for men. However, for the lookbook, he modeled the coat on a woman. His version is the original wraparound design (no buttons, just a belt). But it was done in navy.


In the past, designers have also made this in blue for men.


The garment has been marketed to, modeled on, and sold to women countless times in the past. Another example of menswear on women, and done in a way that's not about making them look cute or butch. Would characterize this simply as referencing classic American dress. The expression is just preppy, wealthy, classy, sophisticated, etc. Basically, the ideas that Brooks Brothers traded on for generations.


This ad even calls it by its name. "The Polo Coat. All Things To All People." Although, I don't know if I would call this specific design a polo.

Thanks for the history lesson. The specific pic you showed looked bulky on her and bath robesque, but I can see how the look can be nice on some girls.

Mercurio said:
From the Kiton FW 2021/22 lookbook (among many others)

In every Kiton collection there is a story of style and elegance, exclusivity and quality. Be inspired by our Made in Italy tailoring garments.

From the Cessre Attolini FW2021/22 lookbook: 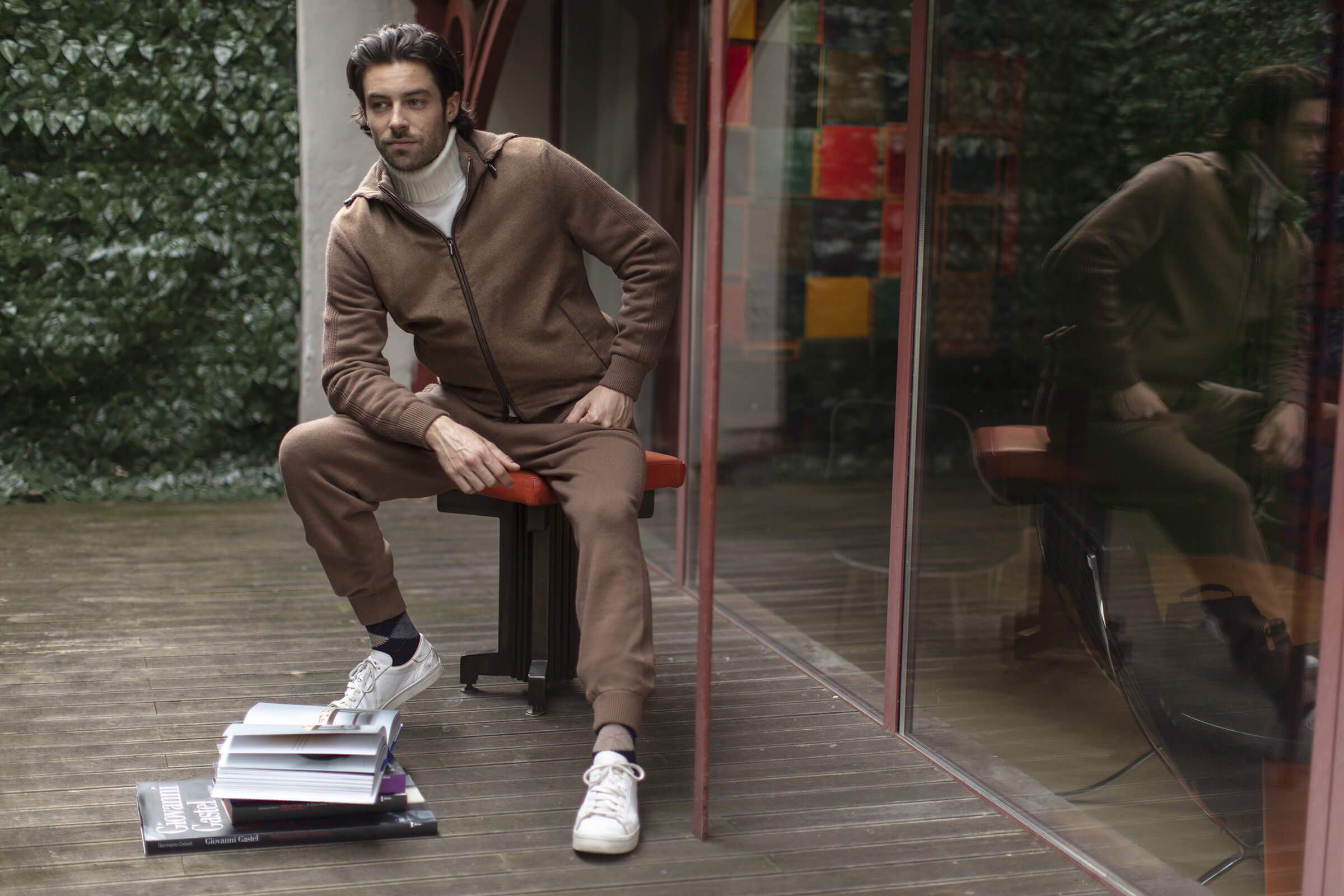 FALL WINTER 2021/22 The studio of Achille Castiglioni: one of the great masters of italian design. Born in Milan in 1918, his father was the acclaimed sculptor Giannino, who was particularly active in the period between the two world wars and would influence Castiglioni’s “plastic” approach to...

'Display' does a lot of work here: https://www.bbc.com/worklife/article/20180612-the-reasons-why-womens-voices-are-deeper-today

物の哀れ said:
My tailor has a seperate women's line.

I like most of those looks (except for the extremely tonal ones, which look a bit affected), and the running trainers with tailoring really work for me. Who's the tailor/designer?

dieworkwear said:
Do you mean the more dandy expressions of CM? I've never met anyone who dressed like that in real life, but I've met a few people from the CM and SWD sides of the board. Most are very stylish, but look natural to me. Of course, my view is probably colored by the fact that I like clothes. Also maybe colored by the fact that I live in an area where there's a lot of diversity in dress, and some oddball characters. So you'd have to really go out of your way to dress strange.
Click to expand...

i guess I mean that I increasingly think that the only real rule is “look natural.”

so if you are extremely good looking, you can look natural in a wider range of clothes than normal people. This is why it can be very misleading to see unique style on famous people or models and think that you can easily adopt it

the truth is the average dude who doesn’t care about his clothes at all often has a better shot at fulfilling rule #1 (look natural) than the average looking guy who tries to cop looks from models, actors, historical figures, etc

dieworkwear said:
I know we're beating a dead horse at this point, but just wanted to add that I recognize you're only talking about women in menswear. I also recognize that some of these looks can come off as "cute." Or they can come off as "butch." But I also think there are other expressions -- cool, elegant, rugged, hippie, or whatever. The expression may not directly be about the singular focus of gender (which you've coded as cute = feminine, butch = the negation of femininity). These expressions may be layered on top of the gender expression. So a woman may look androgynous, feminine, or masculine, and on top of that cool, elegant, or whatever.

Some of the terms you used to describe the looks I posted earlier are imprecise. Such as you calling some looks frumpy. That just seems to be "I can't make sense of this look." But I think that springs more out of a lack of familiarity with this subject.

A woman who's unfamiliar with menswear may view the styles posted on this board in the same limited terms. I remember a poster on here who insisted that women read the outfits posted on this board as frumpy and "old man-ish." I'm talking about the types of outfits that Iammatt and Vox used to post. Another poster told me that his wife vetoed a Balmacaan coat because she also felt it was old mannish. Which, fair enough -- her view is her view, and if you live with someone, you should also try to get along. But to people on this board, things such as tweed sport coats and balmacaan coats register as elegant, tasteful, and masculine.

1) I feel weird posting photos of actual, real-life women on this side of the board so that a bunch of nerds (including me) can say whether she looks cute or butch
2) I then resort to posting photos of models or famous people. But because of how media is orientated, many of these women will be small and thin.

I can only say that, when I step out into the world and see real-life, well-dressed women in menswear, they don't read as "cute" or "butch" to me. I feel like this should be most obvious for the suit -- historically a men's garment. A woman putting on a suit doesn't necessarily look cute or butch, she may just look professional.
Click to expand...

wearing men’s clothes is almost like a test— like, hey, watch me ski this double black diamond and still look hot without even trying

TheChihuahua said:
I can’t keep up with this thread.
Has @dieworkwear posted any pictures of old J.C. Penney’s catalogues to support whatever position he is taking with respect to women’s fashion being a good starting g point for men with trained eyes?
Click to expand...

Nah, not yet, mostly big baggy 80s style overcoats and a few man-chicks

Waldo Jeffers said:
unless you are ridiculously good looking, or have an extremely commanding personality, which in the case of men who are considered very attractive, largely overlap, most of this stuff does come off as cosplay.
Click to expand...

FlyingMonkey said:
This thread... well, the only think I can say about it that's positive is that it's turned into a good idiot identification tool.
Click to expand...

My guess is that you would (proudly) identify yourself as among the most progressive thinkers (thinkers?) on this board. You know, what with the whole 'left-wing professor' bit and all. Yet, the only person I hear calling others assholes and idiots is you.

On style and the necessity of being 'good looking'...

Style in the real world, and not in the mute and passionless world of the runway, lookbooks and magazines, is mostly about four things: taste, knowledge, confidence and personality. I would say that 'good looks' comes much lower down than all of these things - and it can compensate to some extent for inadequacies in the main four areas but only for so long. And the good thing about taste, knowledge, confidence and personality is that they are all things one can develop. Sure, you can sit in a dark room with you polished Oxfords and shorts on and bemoan how misunderstood you are and how you wish you were better looking (for example!), or you could listen and look and learn, you could work on your body and mind, and you can become the kind of person who people just associate with being stylish.

I still experiment and I get things wrong all the time, but I really appreciate what @dieworkwear has been incredibly patiently trying to explain here because I think we share a fundamental understanding of the aesthetic underpinnings of style and its equal application to men, women and everyone in between, which are ultimately more important than any of the minutiae. And despite the fact that Derek does tend to hark back to Vox's Coherent Combinations for Beginners on other threads, it's clear what he's actually actually promoting here is far beyond those starter concepts for CM: broader principles that include fit, but also volume, silhouette, colour, texture, which can be considered as applicable to those Coherent Combinations but which are ultimately much more fundamental. If you keep trying to work with those underpinnings, you can get away with a lot of things, especially if you do them with confidence and a smile, sneakers with tailoring being the least of it.
Last edited: Sep 24, 2021

What is it that men should wear to please women? (That seems like it would be something of value to come out of this thread!)

Yes, depends on the suit and sneakers of course. e.g I have a fashion forward (old Prorsum) seersucker suit that I wear in the summer with trainers and a t-shirt. Hell, I've worn it with flip flops.

acapaca said:
My guess is that you would (proudly) identify yourself as among the most progressive thinkers (thinkers?) on this board. You know, what with the whole 'left-wing professor' bit and all. Yet, the only person I hear calling others assholes and idiots is you.
Click to expand...