I recently purchased some Saphir polish products, and this afternoon I decided to give them a whirl.

My test shoes were a pair of Allen Edmonds Fifth Avenues I've had for about a decade; they'd been somewhat neglected and sitting in the back of my closet for a couple of years. Previously, they'd only been polished with Kiwi products.

However, while it was not particularly obvious prior to starting the mirror shine on the toe caps, there is a irregular patch on the right toe cap that does not appear to be taking any of the polish -- it becomes progressively more obvious as the area around it becomes shinier and shinier. I'll attempt to attach a picture below: 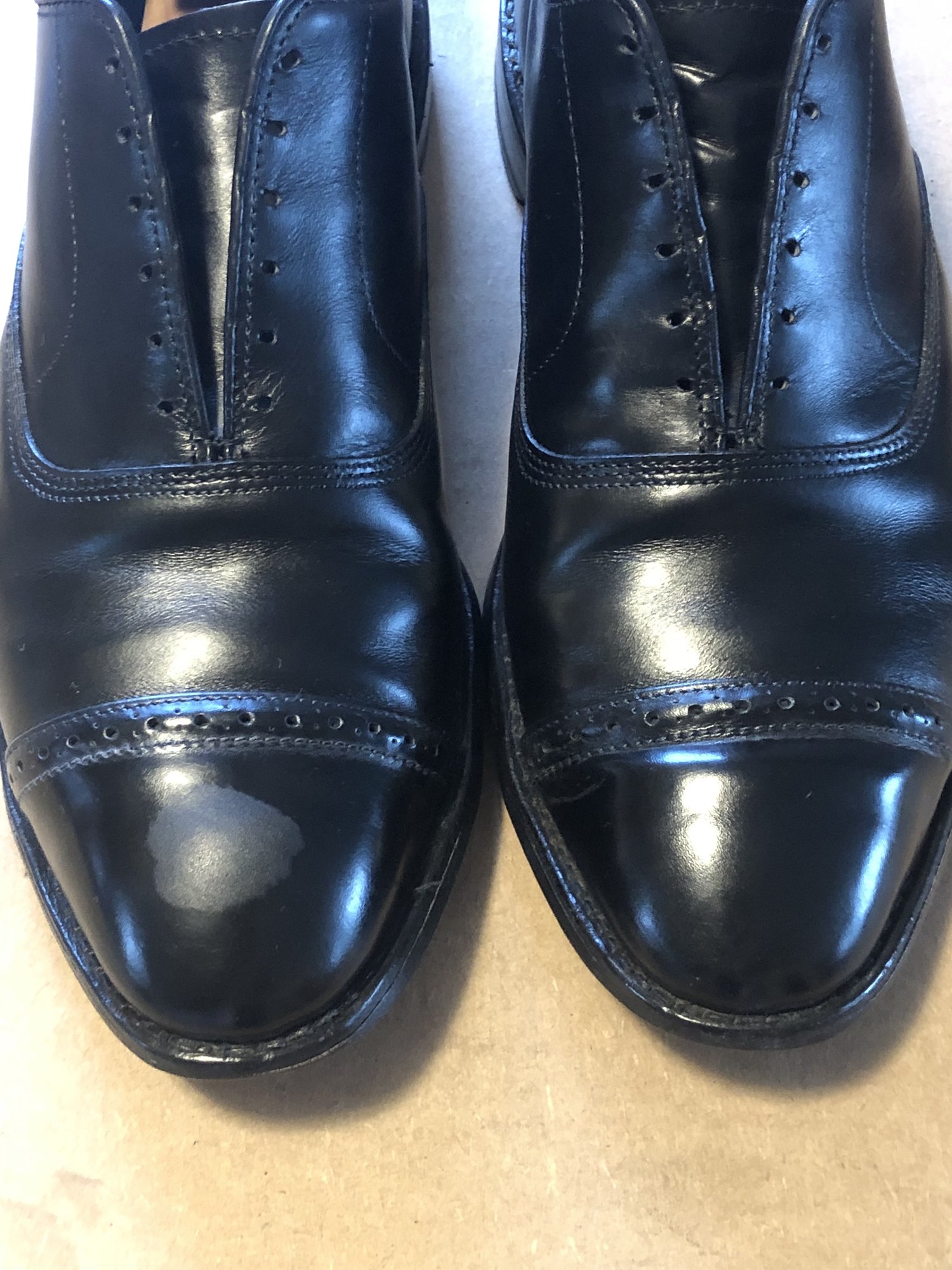 Any ideas on what might be causing this issue? This appears to be the only spot with this issue; but as Murphy would have it, it happens to be in the most obvious spot possible. I don't recall any issues like this in the past, but it has been a couple of years.

Was I too gentle with the Renomat? Too aggressive? Is this perhaps a consequence of salt/water damage from years past? (Courtesy Canadian winters...) How would you recommend I proceed to rectify the issue?

I would suggest removing the entire polish from the cap again with Renomat, let it dry over night. Then cream to renourish the leather, polishing the remnants off and let dry overnight again. Then give it a layer of wax polish and let dry overnight once more. The day after start gradually building the layers of shine. I've experienced a similar phenomenon when the wax is fresh and still contains a lot of solvent and when you don't give it enought time between the layers to dry. Using a hair dryer or placing the shoe in the light of warm lamp between polish layers helps avoid the fresh wax dissolving the previous layer.
R

Thanks. I spent the past week following a slow renovation procedure as you suggested. I stripped the toe cap with Renomat and started over. After four coats of the cream polish, each allowed to dry overnight, the problem area was hardly evident. Thereafter, I was able to do a mirror shine as "normal".

Thanks again for the suggestion/reassurance.
G

I have the same issue on some black Meermin Oxfords. I’ll try this solution - thanks!

I think you’ve been polishing the shoe with a wet patch there. Water underneath the layers of polish is causing the blow out you see here, and it doesn’t even have to be a lot of water for this to happen.