I just moved to San Antonio, TX and am interested in buying a Panama Hat. Appreciate any recommendations on store I can visit.
Thx

just get yourself a straw Resistol and some Lucchese boots and Bob's your uncle!

FWIW, Panama hats were quite popular with the Texas Rangers in the 19th century. If you want to blend in a bit more, Panamas with Western styling may be had.

Sorry to revive this 3 week old thread but;

For this there is a lot of information over at the Fedora Lounge. Basically there are 3 players in the fine Montecristi market. Panama Bob, Optimo Hats, and Brent Black. I chose Brent Black, all 3 are exceptional hats. Quality straw, nice neat weaves and a good amount of weaves per inch. The hats are actually not made in Panama but come from Equador, Montecristi hats are not made in Montecristi, I think they are brimmed or finished but not 100% made there. Sorry my hat knowledge is a bit rusty. Premium hats are also "Hand Blocked" instead of just put in a device and pressed to give the hat the pinch. Hand blocked hats are much more durable and hold their shape longer. But like all things in life expect to pay for them. Montecristi's run about $500. Panama Bob's hats are the best priced and very popular on the Fedora Lounge. 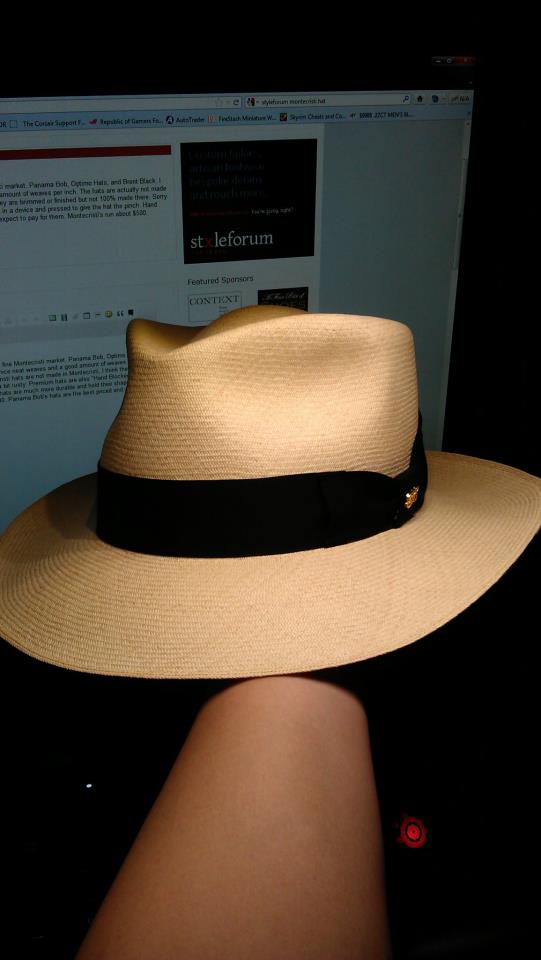 And deservedly so. I love mine. While if one is a true, knowledgeable connoisseur other brands may be prefered, in the hat/cash equation, Bob beats all.

I have a Brent Black hat. Really like it.
Kai

Here is my experience ; I have several beautiful hats from Optimo , really nice but expensive. I have also taken a few ebay buys to them and they come back beautiful and I have much less invested in them than the more or less $500.00 of the usual custom hat . Graham's ( Optimo ) Panamas as well as his other straw offerings are some of the worlds finest and cost accordingly . The finest examples of Panamas and Milans I have ever seen have been in his shop. My most expensive hat from him is a Panama super fino which cost a little more than $1500.00 . I have never seen in person a Brent Black hat so I can't make a fair comparison of quality between his and the Optimo sourced hats but my impression from the Brent Black web site is that I would have paid more for a similar quality hat ordered from them.

Panama Bob is competing in a different market. He is a fine fellow ( teacher ) married to a kind lady from the region (Ecuador ). He sells a lot of hats . They are not the same quality as the Optimo / Black hats but that is reflected in the price . Bob gets hats of various quality and with him you can more or less just give him a price and he'll get you into the best hat you can find at that price . He knows hats and the artisans that make them and his hat are a great value purchase . Many people choose to buy hats from him and then have them finished here in the states from one of their trusted hatters. I have waited awhile to have an order fulfilled but he was attentive to what I wanted and called me at home on a Saturday ( his day off from school ) to make sure he understood my request for a royal blue ribbon and not black or navy. His wife changed the ribbon and I had it a few days later. Your wait time is a function of his current inventory. He has a great reputation at the fedora lounge among people that really like hats. The same can be said of Optimo and Brent Black.
Last edited: Jun 15, 2013

isaac77 said:
My personal experience with PANAMA BOB was bad, Big delays,i ordered a Cuenca grade 16 hat suppose to take 6 weeks and end up to have it in 18 weeks. And surprise after 18 weeks i receive a Cuenca grade 3-5. Than after all long wait he tell me if i don't like it to send it back.What bad business practice,Robert Weber strategy business is bait and switch for me so called PANAMA BOB. Spend little more money and treat your self good to other vendor. Read clear the terms in panama bob website www.panamabob.com/ and you will find his terms are kind misleading to be in his advantage. Horrible business practice.If you want to gamble your money there than Good Luck. I will post a photo with the junk hat he send me.
Now he abandon the his website www.panamabob.com and move his website to http://panamas.biz/ a typical move for dishonest hat makers.
Click to expand...

OlSarge said:
And deservedly so. I love mine. While if one is a true, knowledgeable connoisseur other brands may be prefered, in the hat/cash equation, Bob beats all.
Click to expand...

Avoid panama http://panamas.biz/ ,If you want to get a the bait and switch business scheme Panama Bob will be a bad move.Think twice and do your home work before you buy from Robert Weber.The fedora lounge a lot of threads belong to Robert Weber under different user names so he can boost his panama hats bait and switch sales.
Last edited: Jun 18, 2013

All this threads it look like are bogus perhaps fallow by Robert,I will not lose my time here anymore since all my post get deleted and are replace it with kind words for Mr Robert Weber,If you can't take criticism in business market than you're not a honest business men.End of story

Yes Bob beat all in bait and switch scheme,means you pay $140 for a panama hat and you will receive a $30 panama hat worth instead,I agree with you he beat all with cheapo quality panamas hat.

^I had somewhat mixed experiences dealing with Panama Bob. I had a considerable delay in getting my first hat from him, a lower-grade Cuenca, but when it finally arrived, it proved to be a very nice hat and a very good value. About year later later, I ordered another hat, a somewhat higher grade one. In all, it took about six months to get the hat, with all manner of confusion and delays. When it arrived, it seemed over-large for my head. I stuffed the leather hatband with tissue paper, which is usually a good fix for this problem. Nonetheless, even in a rather light breeze, it tends to go sailing off my head. How much of this is due to its being broader-brimmed, as well as a finer weave and hence lighter, and how much just bad fit, I'm not sure. Perhaps I should have returned the hat to Bob, but summer was starting. I had placed my order in January. and by that time I was weary of the whole business.

In fairness to Panama Bob, like anyone in the import business, he really is at the mercy of his vendors. He certainly presents himself as a likable, decent guy trying to do the right thing, and he may well be just that.

Bottom line is that buying a hat--any hat--via mail order is a very chancy business. Even halfway decent Panamas are not cheap. If I wanted to spend several hundred dollars on another Panama, I would prefer to visit a hat shop in person, where I could try on Panamas both for fit and to see how they looked on me. I might have to spend appreciably more, but at least my satisfaction would be assured,

Another comment re: Panama Bob ... ordered my hat Jul 10th, still have not received, despite having two separate emails from Robert saying it 'will be shipped tomorrow'.

This is an update to my previous post that was somewhat critical of the second hat I got from Panama Bob. Since I made that post, some 15 months ago, the hat has moulded itself to my head, and I now have no complaints about the fit. I have worn it almost exclusively all summer and into the fall.The hats he provides are far superior to cheap Panamas, as I can attest from experience.
You must log in or register to reply here.
Share:
Facebook Twitter Reddit Pinterest Tumblr WhatsApp Email Link
New posts