Last Pastena order in WBill linen. Pleased with the result. The handwork is amazing. Antonio did an excellent job. 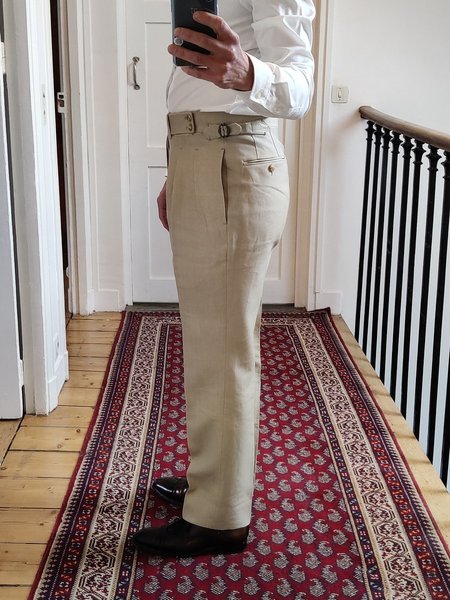 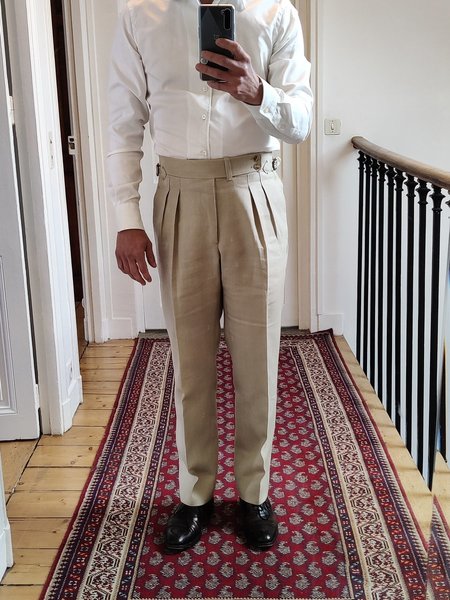 Very nice. The only thing I don't like (anymore) is the chastity waistband.

aristoi bcn said:
Very nice. The only thing I don't like (anymore) is the chastity waistband.
Click to expand...

Always useful when you wander through the dungeon of diseases.

I visited John Di Pietro today to retrieve a waistcoat and trousers in a brown tweed and for a basted fitting of my covert coat. As we've both been vaccinated and restrictions have been eased, it was the first time in more than a year that we've seen one another's faces.

The covert coat is proving to be quite a laborious project as Mr. Di Pietro has never made one before, but he's game to try. I had first proposed this in January of 2020, but... events intervened to cause some delay. It should certainly be ready by fall. 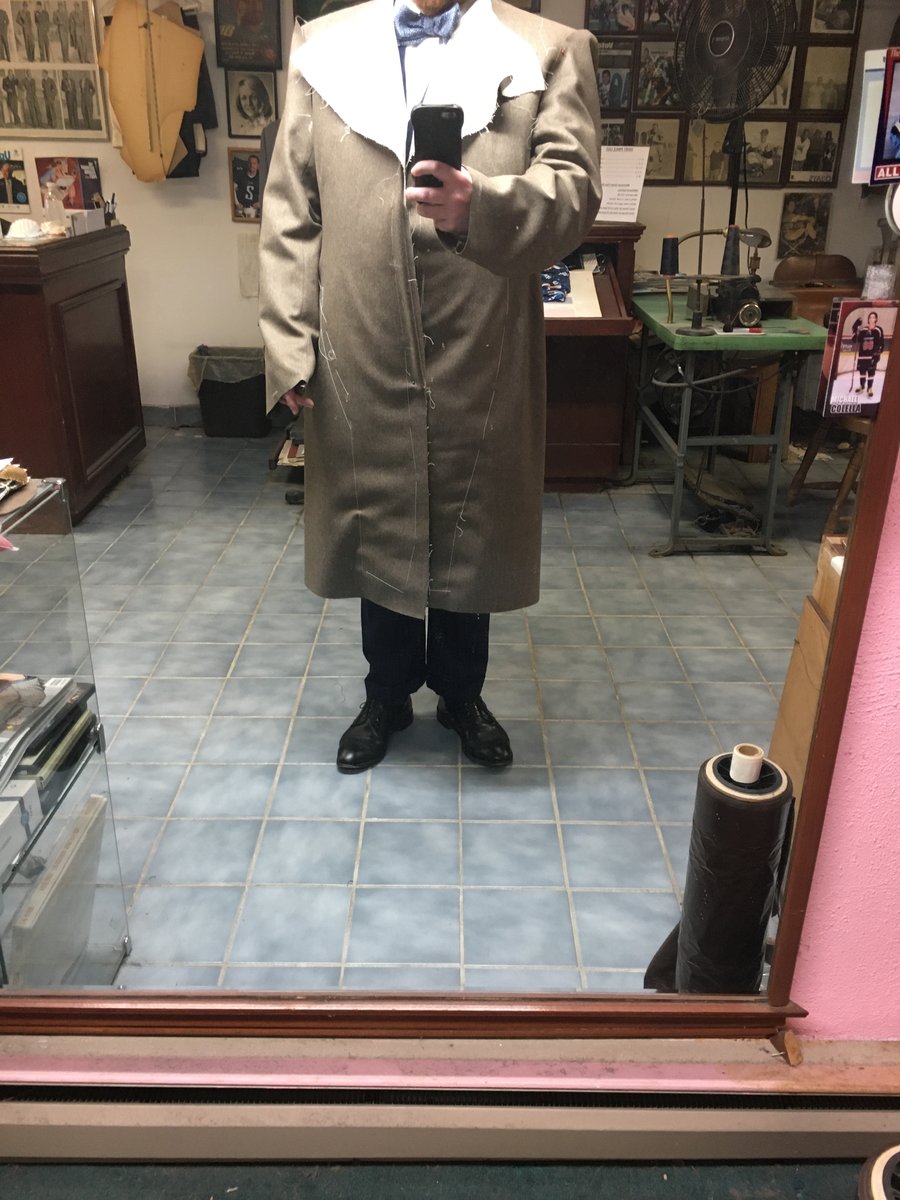 The garment will be a little shorter when finished and have four rows of 'railroading' (contrasting stiches) at the cuffs and bottom as well was single rows along the pocket flaps and along the edges.

While there, I also took pictures of a suit that he's making for a colleague of mine whom I persuaded to try it as he's been interested in a new suit and has been ruined by seeing what a well-fitting suit looks like compared to his. (He's tall, barrel-chested and long-limbed) His wife has also been quite keen on the idea of getting him some better clothes and had tried to persuade him to get one made when they were in Korea a few years ago. (I think that those might have been made-to-measure shops, but I never inquired deeper) 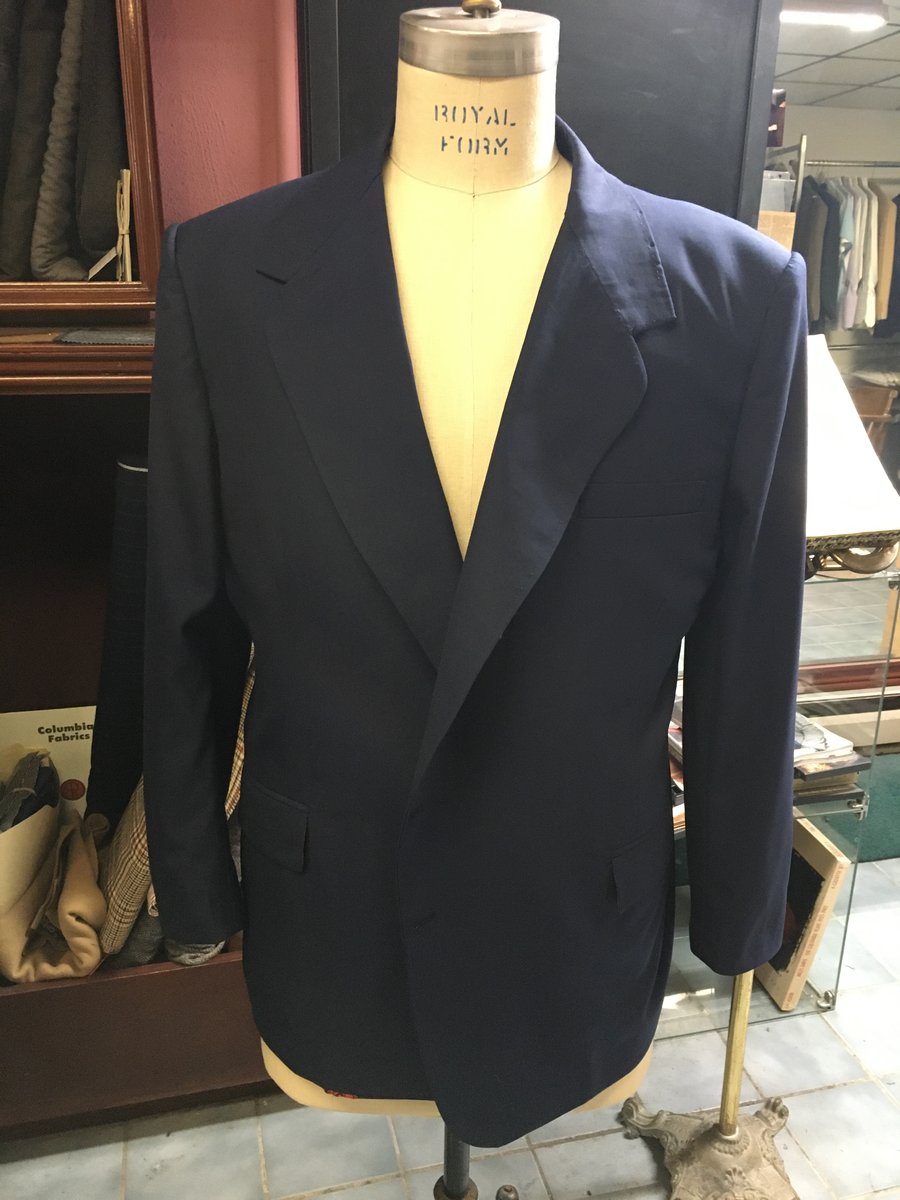 It's in navy gabardine with a 'half-clover" lapel. It just needs its buttons, a little final trimming and final pressing. 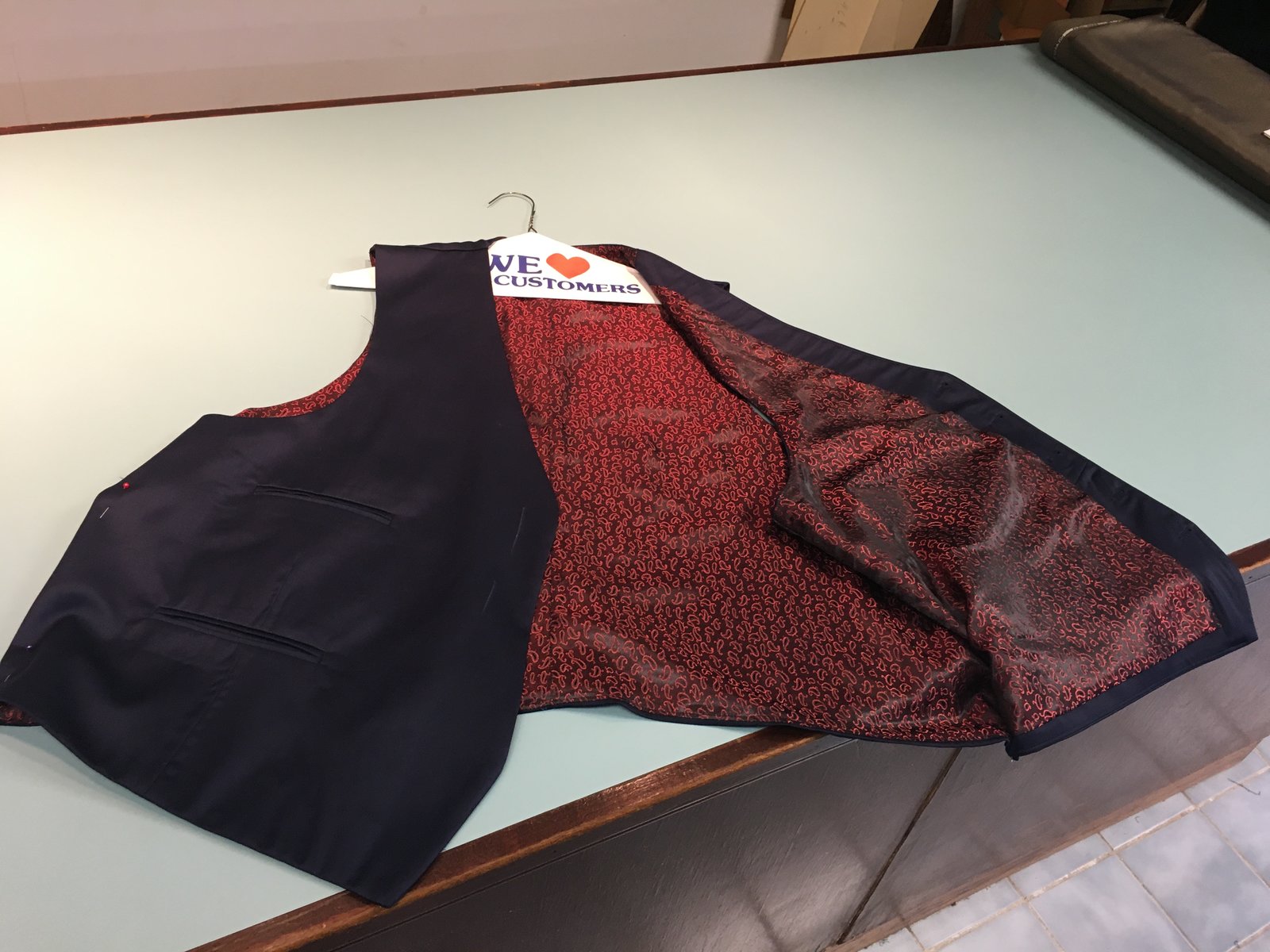 It will be a three-piece. He and his wife have been quite taken with some of the flashier linings on my suits, so he was very enthusiastic about choosing something with some excitement to it. He chose this iridescent red paisley, which is a pretty classic pairing with the navy. He's enjoyed the process and even bought some of the made-to-measure shirts that Mr. Di Pietro offers. He's also considering having Mr. Di Pietro make a blazer for his wife as a gift.
Last edited: May 15, 2021
"Clothes have always had a wonderful influence on my physical well-being as well as my self-assurance. All I have to do to make me feel like a new and younger man is to order three new suits of clothes. My fur-lined overcoat gave me such a glow of health that very shortly after acquiring it I was able to enjoy the hazards of a Gargantuan studio cocktail party without a single twinge of pain."
~Adolph Menjou

Strictly speaking I guess this qualifies as MTO, but nevertheless it's based on my bespoke pattern of previous commissions. And I am looking super much forward to receiving these ones made up in W. Bill linen 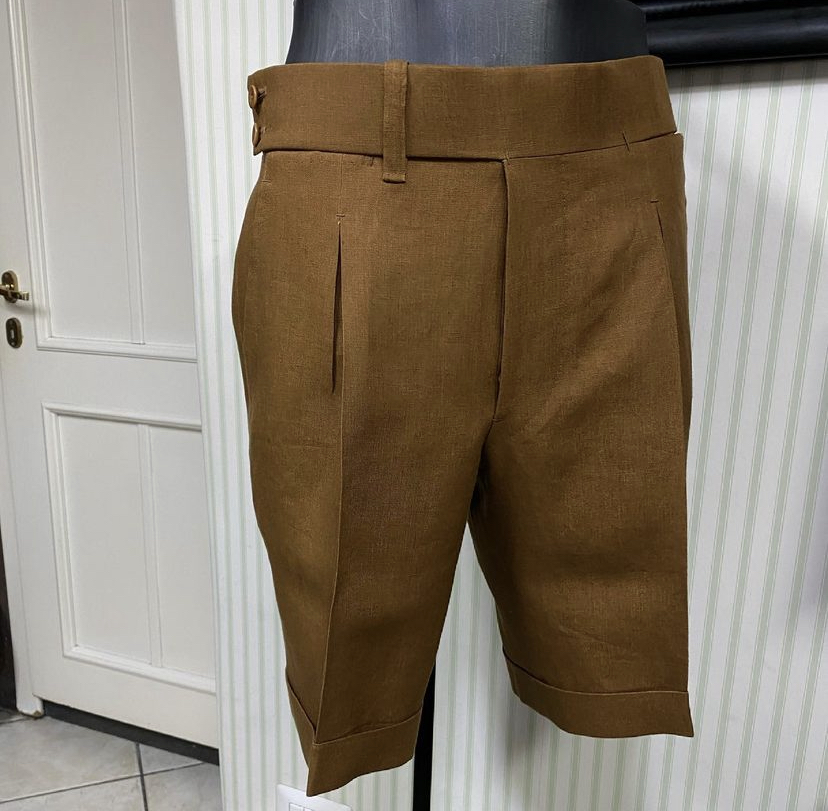 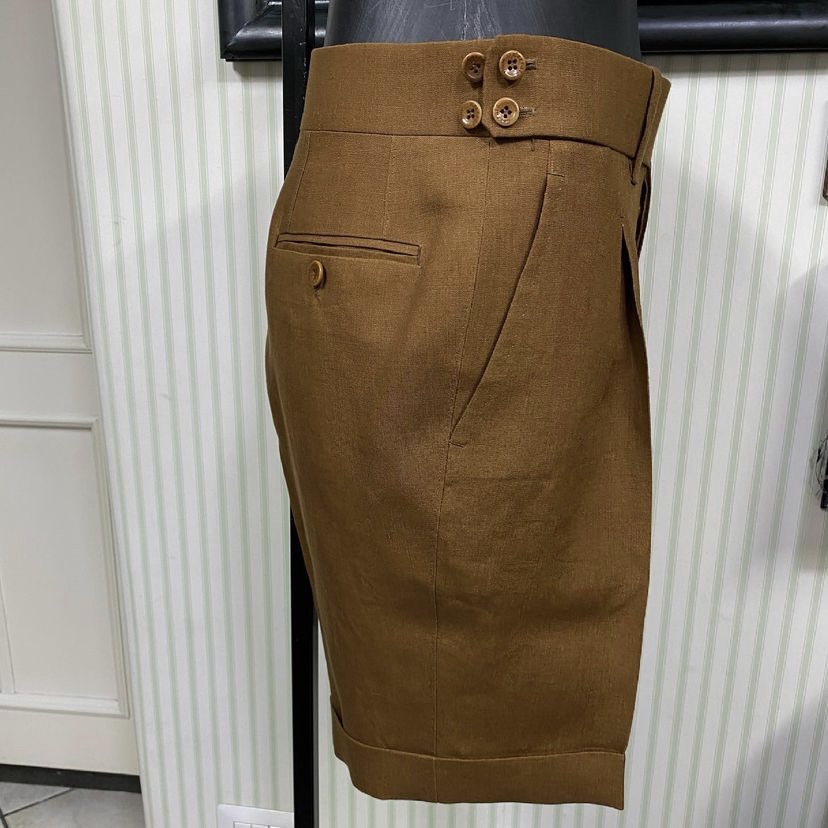 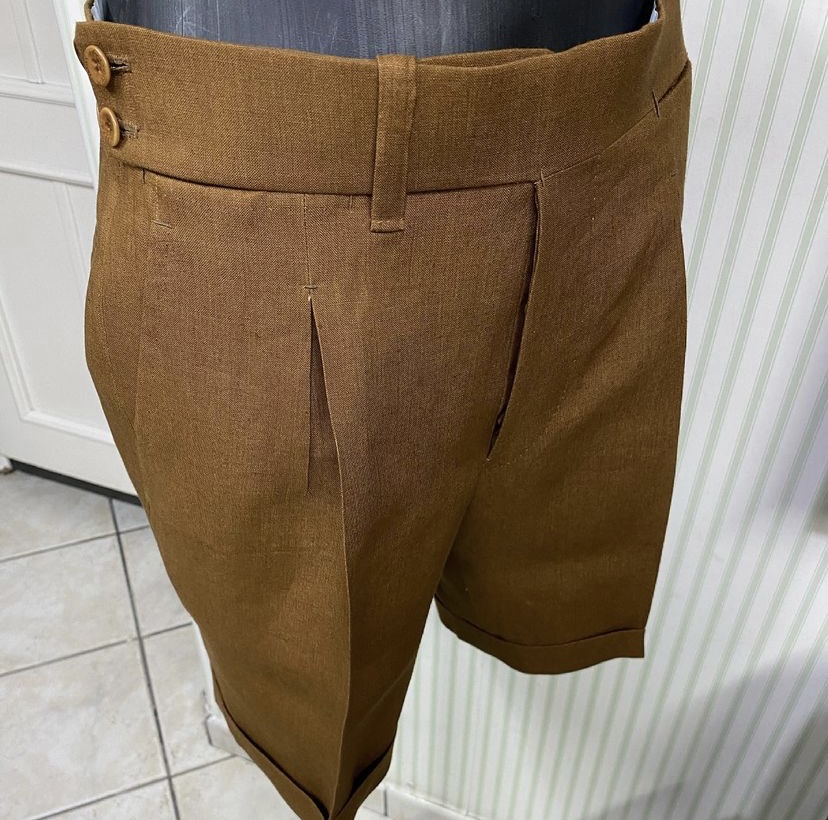 Edwin at Steed made me a double breasted suit in that very same fabric a couple of years back.
"...you may all go to hell and I will go to Texas." Davy Crockett

Edwin at Steed made me a double breasted suit in that very same fabric a couple of years back.
Click to expand...

How does it hold up in the heat?

Great. In fairness though, I may not be as heat sensitive as some. It is heavier weight for sure, so you need to be looking for that. I prefer the way the heavier Irish linens behave better than some of the lighter ones. But YMMV
"...you may all go to hell and I will go to Texas." Davy Crockett

Didn’t really realize how many failures would be involved in the pattern drafting for this raglan sleeve... usually, I’m working off blocks, however, we didn’t have a block for a raglan sleeve so I had to draw it from scratch (I recently acquired a handful of pattern drafting literature from a friend of mines’ apprenticeship days across the pond). A mixture of amateurism and perfectionism to blame for its process, it took me about six retries to finalize my draft. I decided on a one-seam raglan instead of two because although I understand that two seams drape cleaner, I wanted the challenge myself to try to perfect a sleeve with just one seam. Why not?

Somewhere around the fourth attempt: 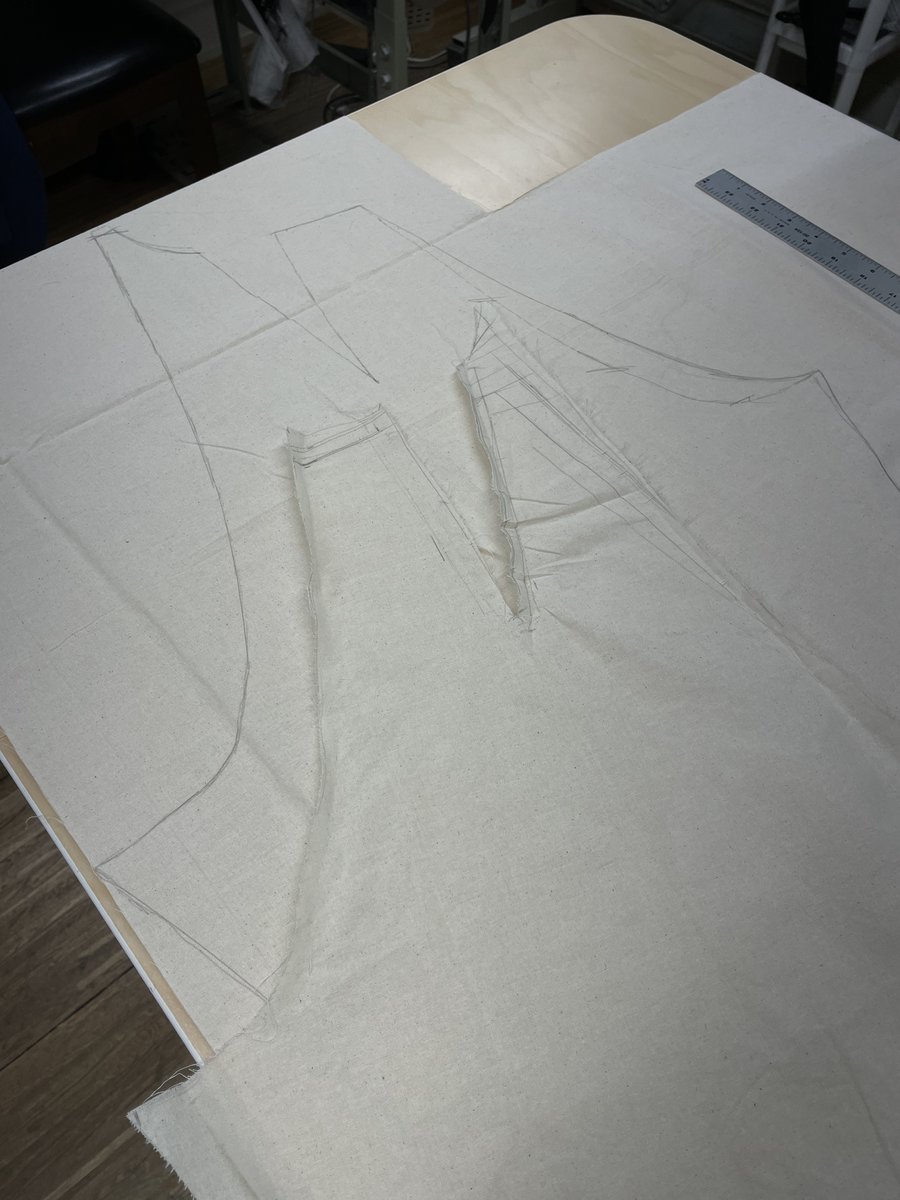 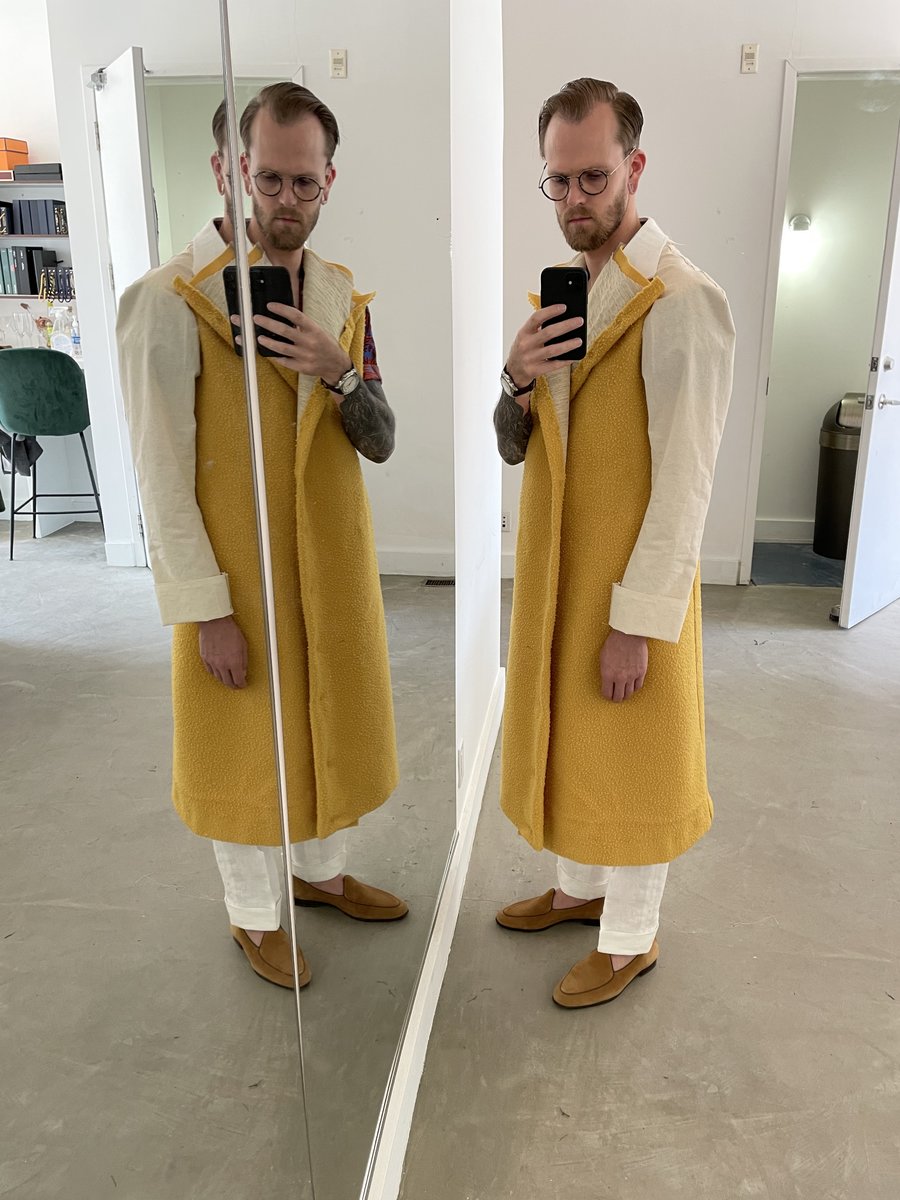 And finally, the final draft: 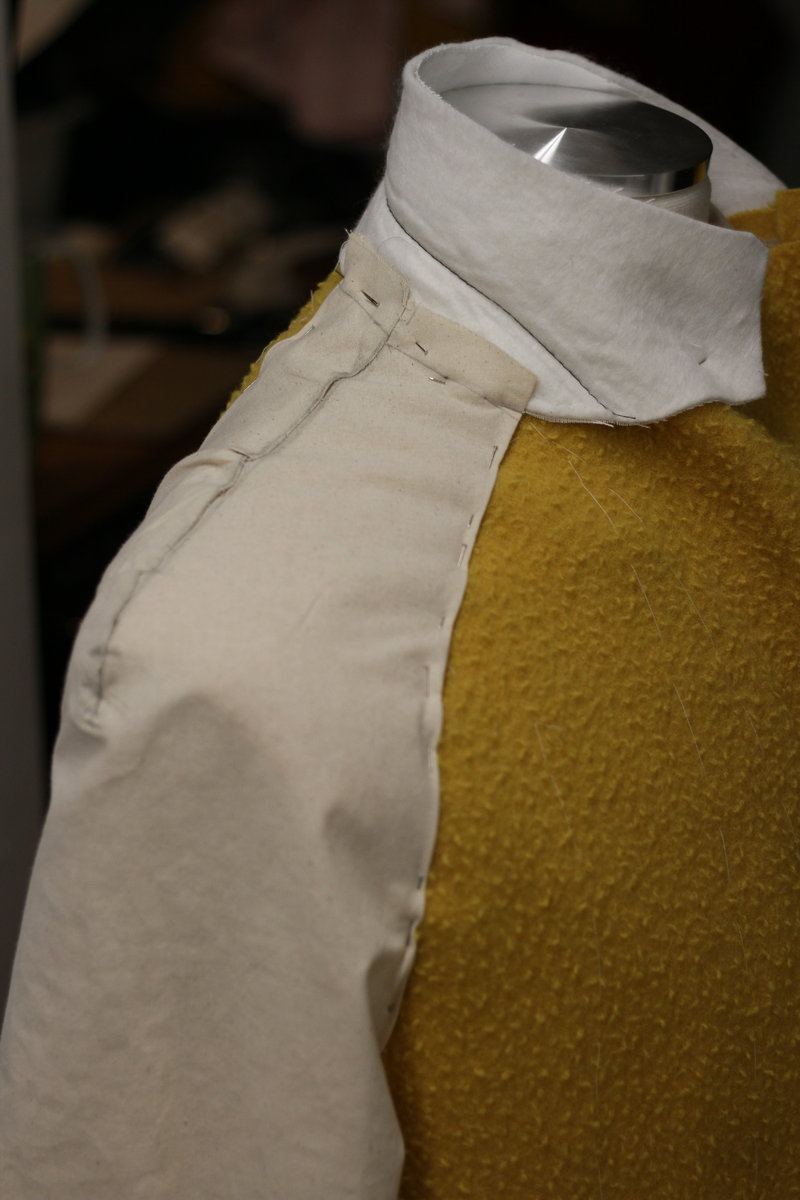 Tomorrow, I’ll take it apart for the last time and trace the pattern and begin putting together the finalized sleeve. With the casentino fabric being quite a bit more spongey, I’m certain the shoulder dart won’t look as dramatically shirred as the muslin. Otherwise, I’ll scratch my head and take it all apart again to adjust: 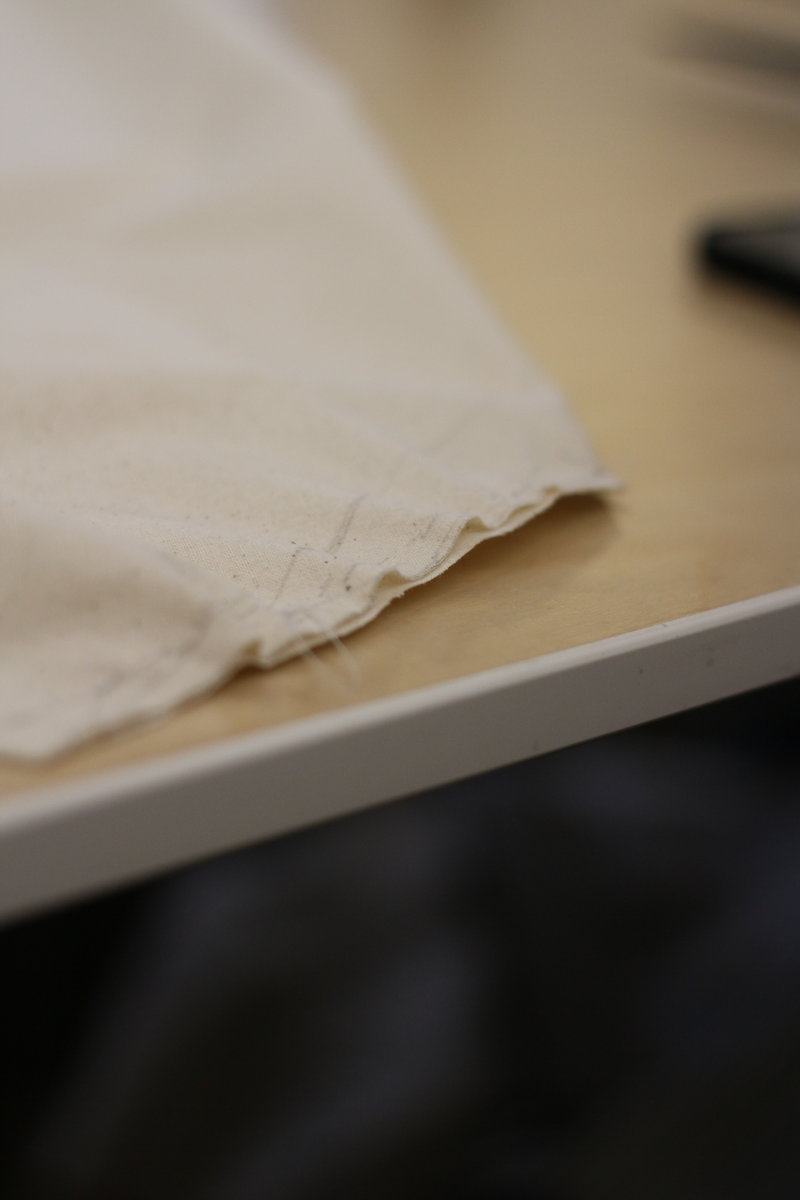 On a separate note, I visited my secondary apprenticeship outside of the city yesterday where I have a shirtmaker teaching me shirts. After having a previous bad experience with a tailor butchering a one-piece collar shirt last year, I felt inspired to try to draw my own pattern for one today: 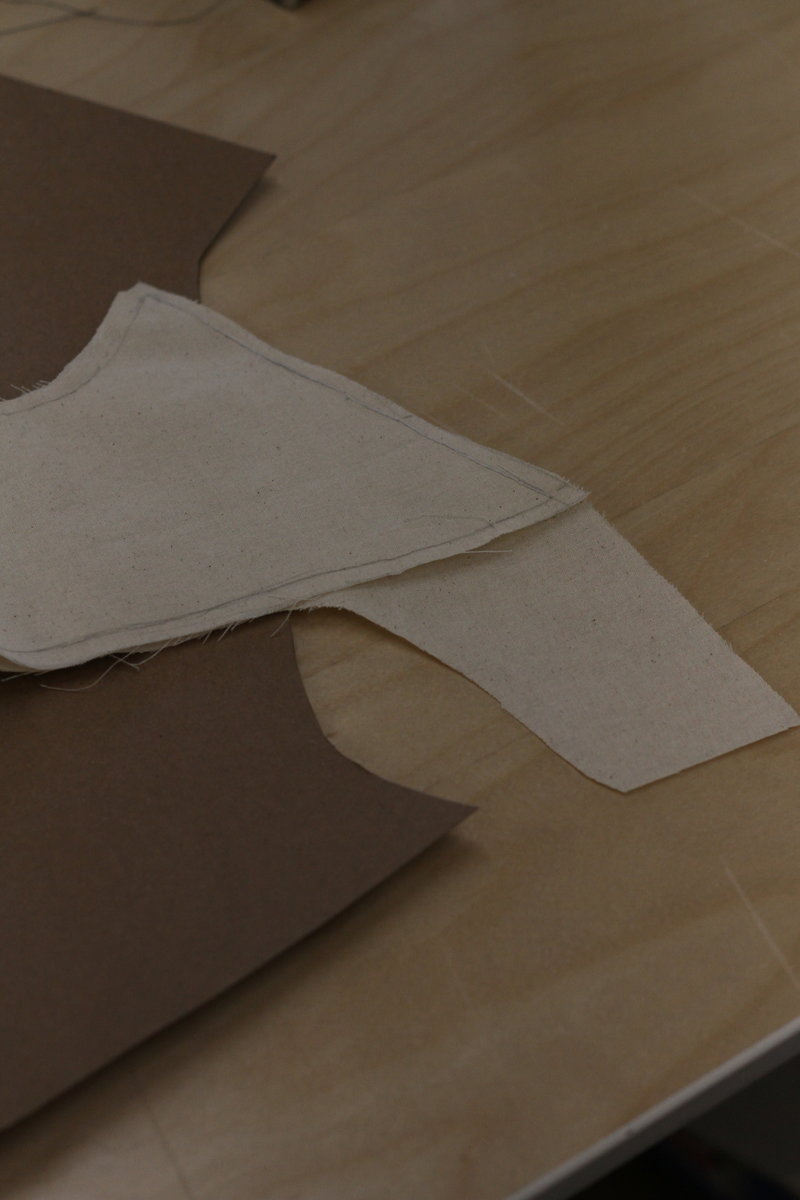 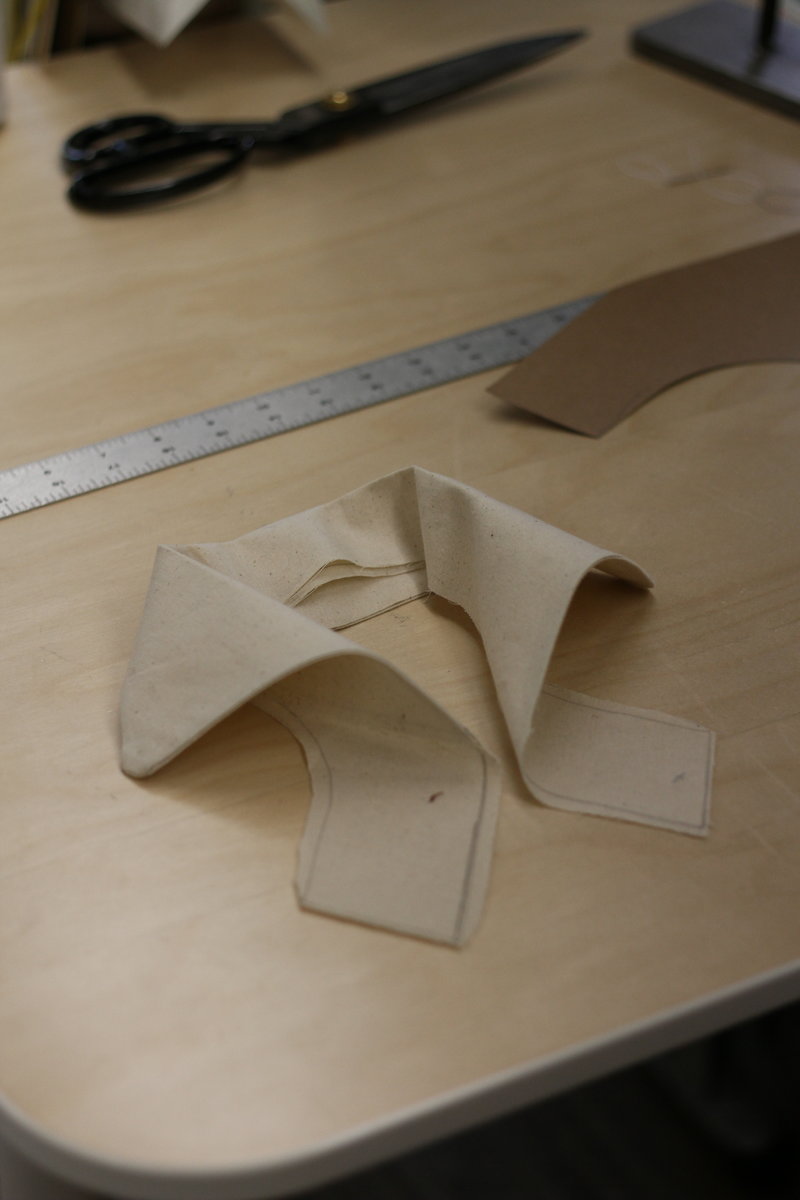 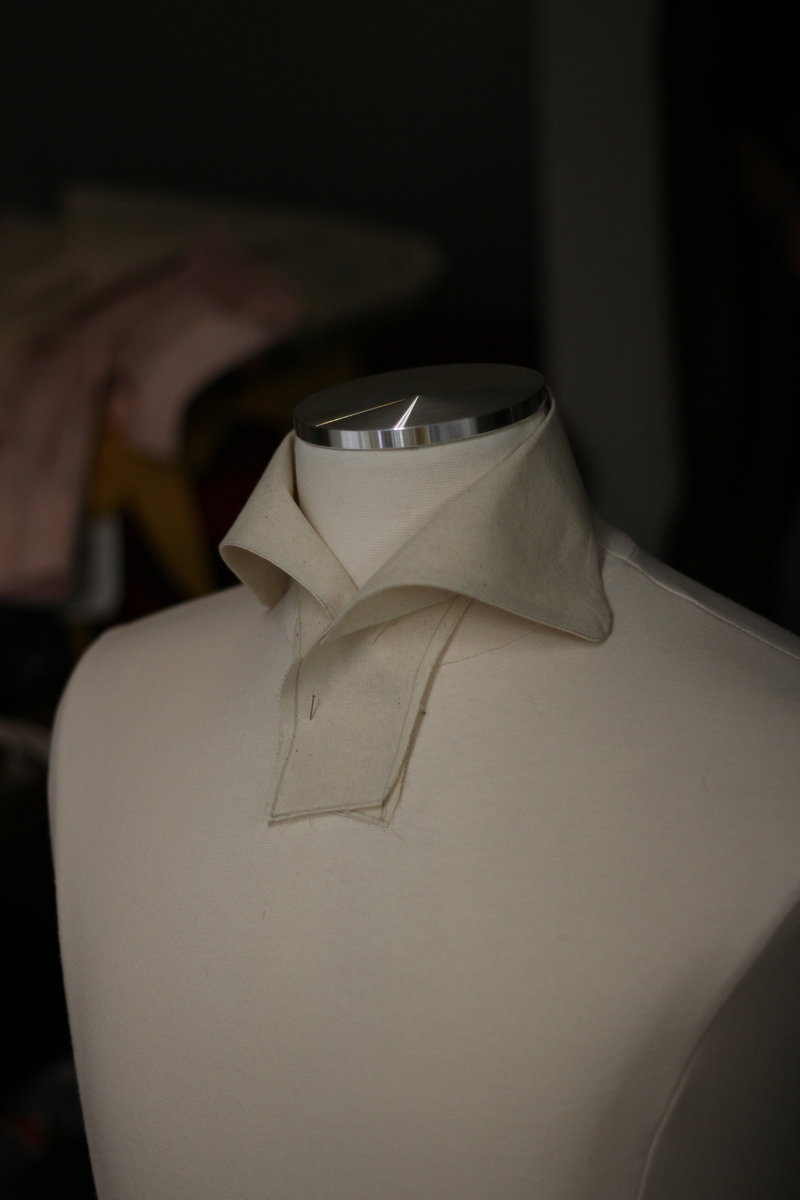 "Fashion is a form of ugliness so intolerable that we have to alter it every six months." - Oscar Wilde

Summer shirts in linen just arrived.
My usual cutaway collar for the micro houndstooth and stripe and a new point collar, placket and pocket on the wider stripes to be worn mostly without jacket. 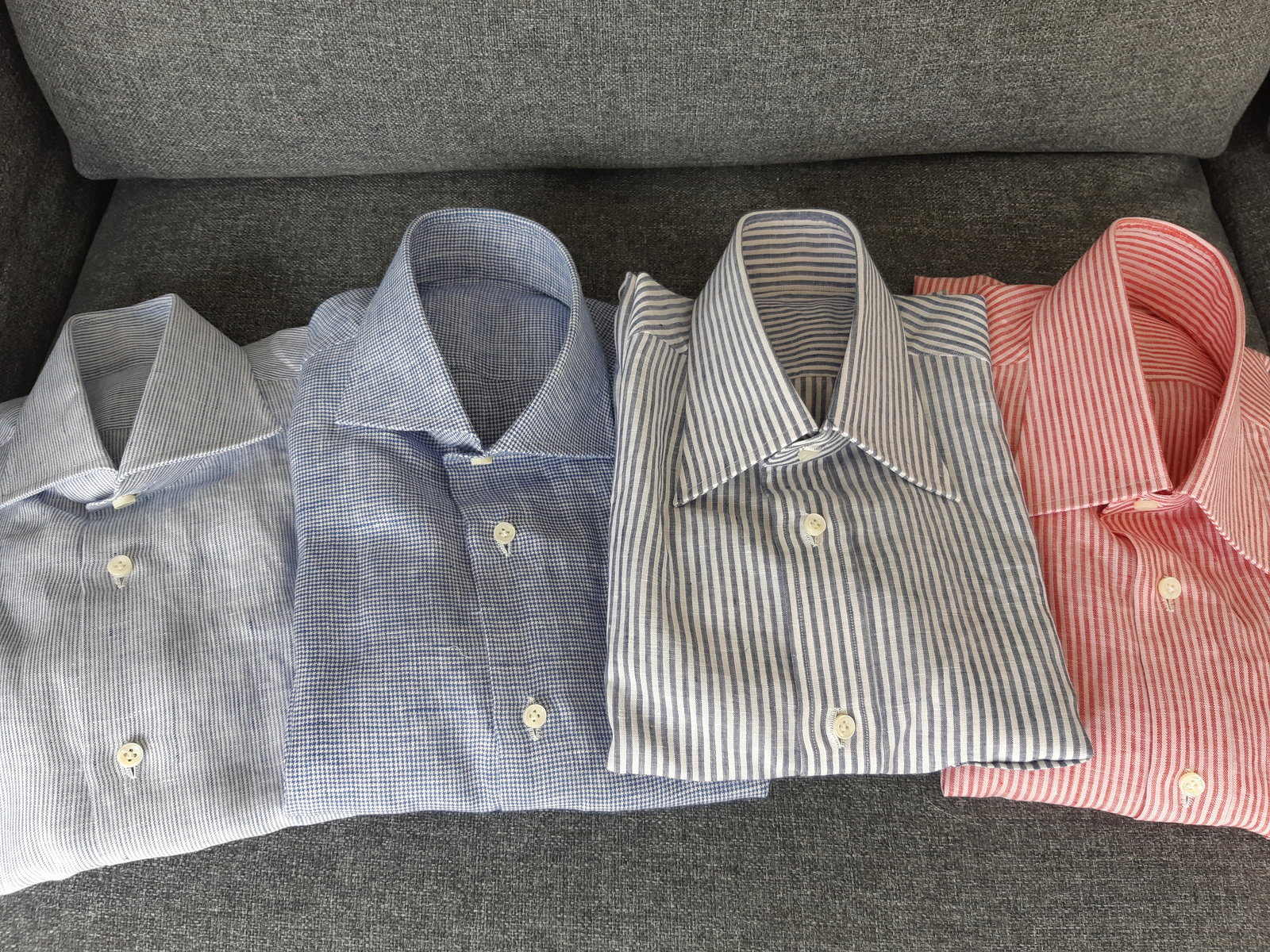 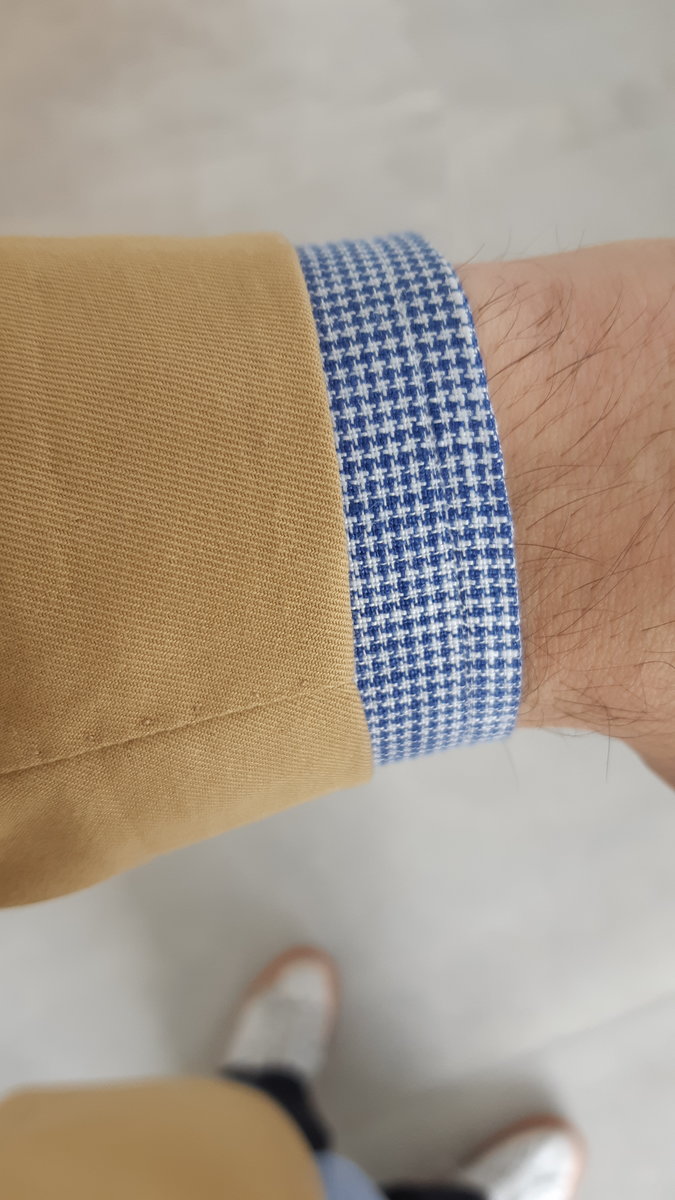 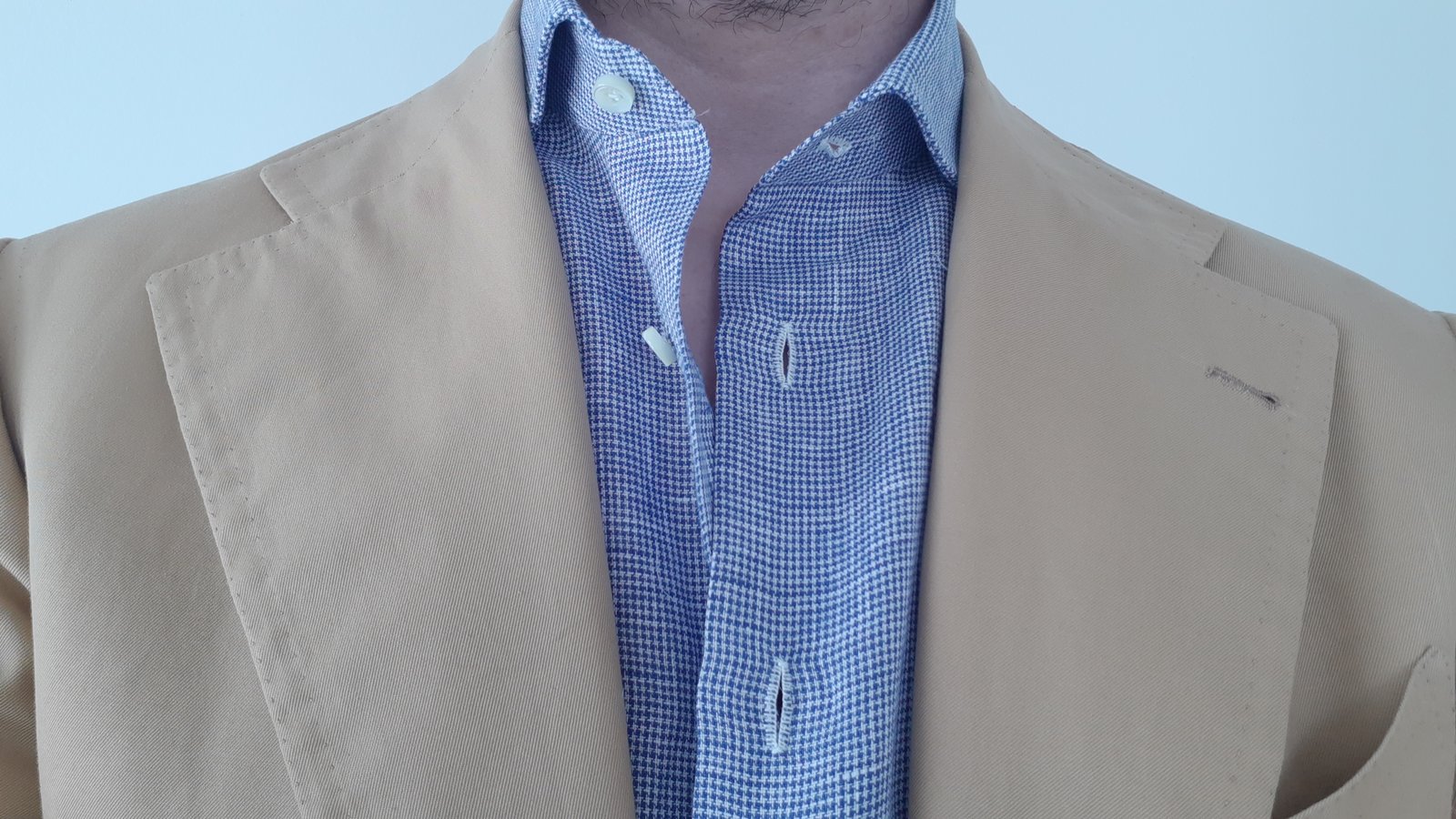 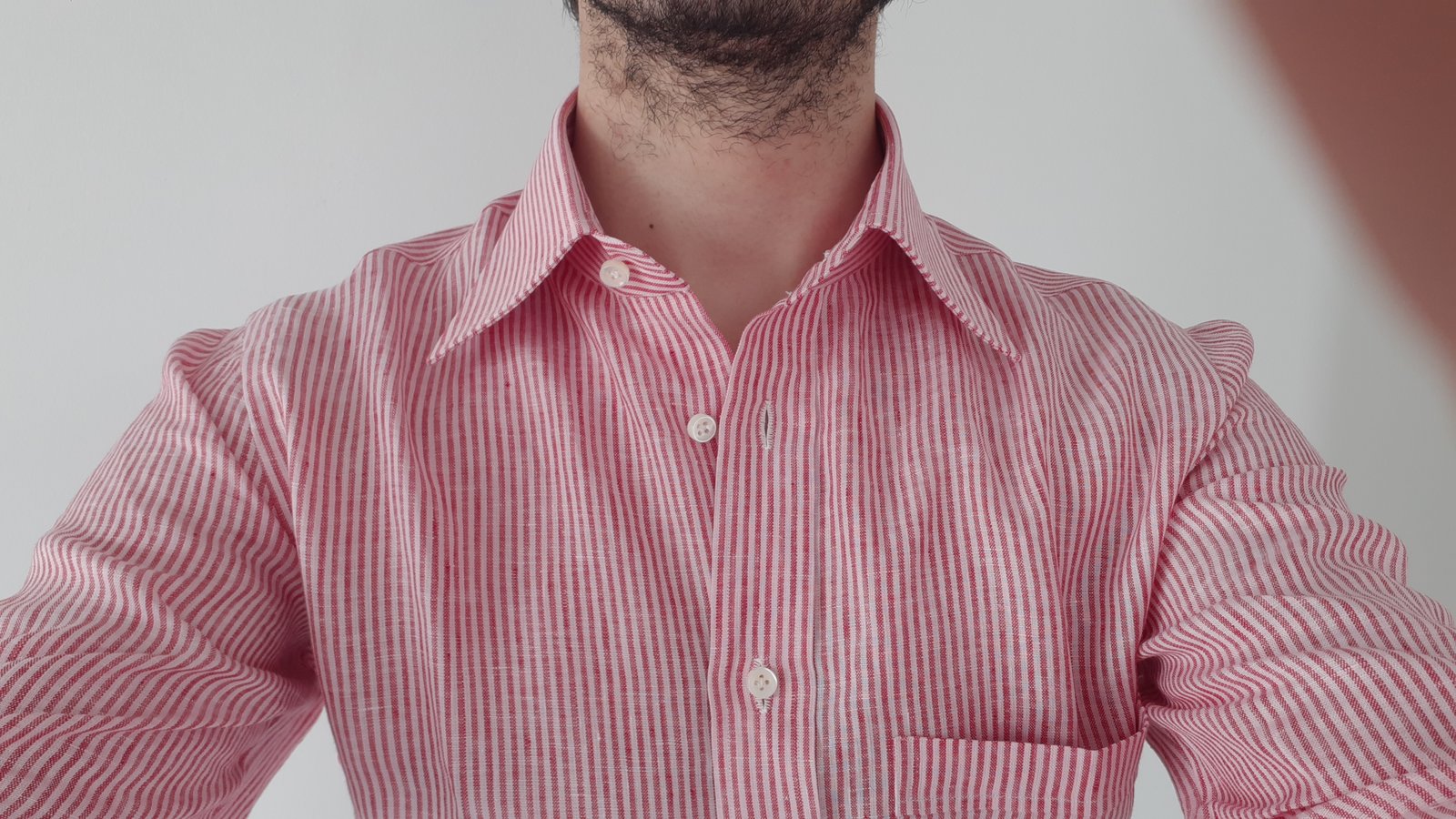 aristoi bcn said:
Summer shirts in linen just arrived.
My usual cutaway collar for the micro houndstooth and stripe and a new point collar, placket and pocket on the wider stripes to be worn mostly without jacket.

Love both collars. From your usual neapolitan dealer?

Marshak said:
Love both collars. From your usual neapolitan dealer?
Click to expand...

Yes, Pepe Golia. Through this time the seamstress should have been different. Yoke is machine made but buttons are hand shanked. Interlining is harder also.

aristoi bcn said:
Summer shirts in linen just arrived.
My usual cutaway collar for the micro houndstooth and stripe and a new point collar, placket and pocket on the wider stripes to be worn mostly without jacket.

I love the red stripe and mini houndstooth. I’ll give those ago next summer!

Hesitating between these two for a summer jacket. Any thought? 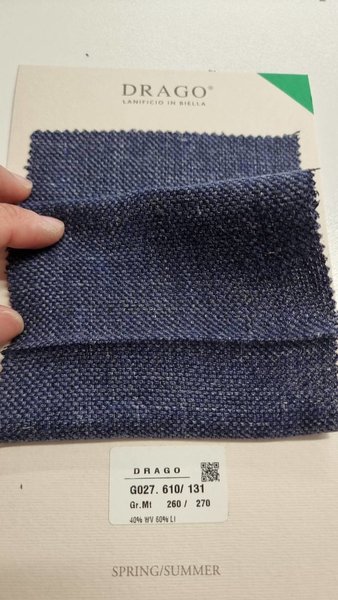 Marshak said:
Hesitating between these two for a summer jacket. Any thought?