I got married in July. Pics came in recently.

Best day of my life. 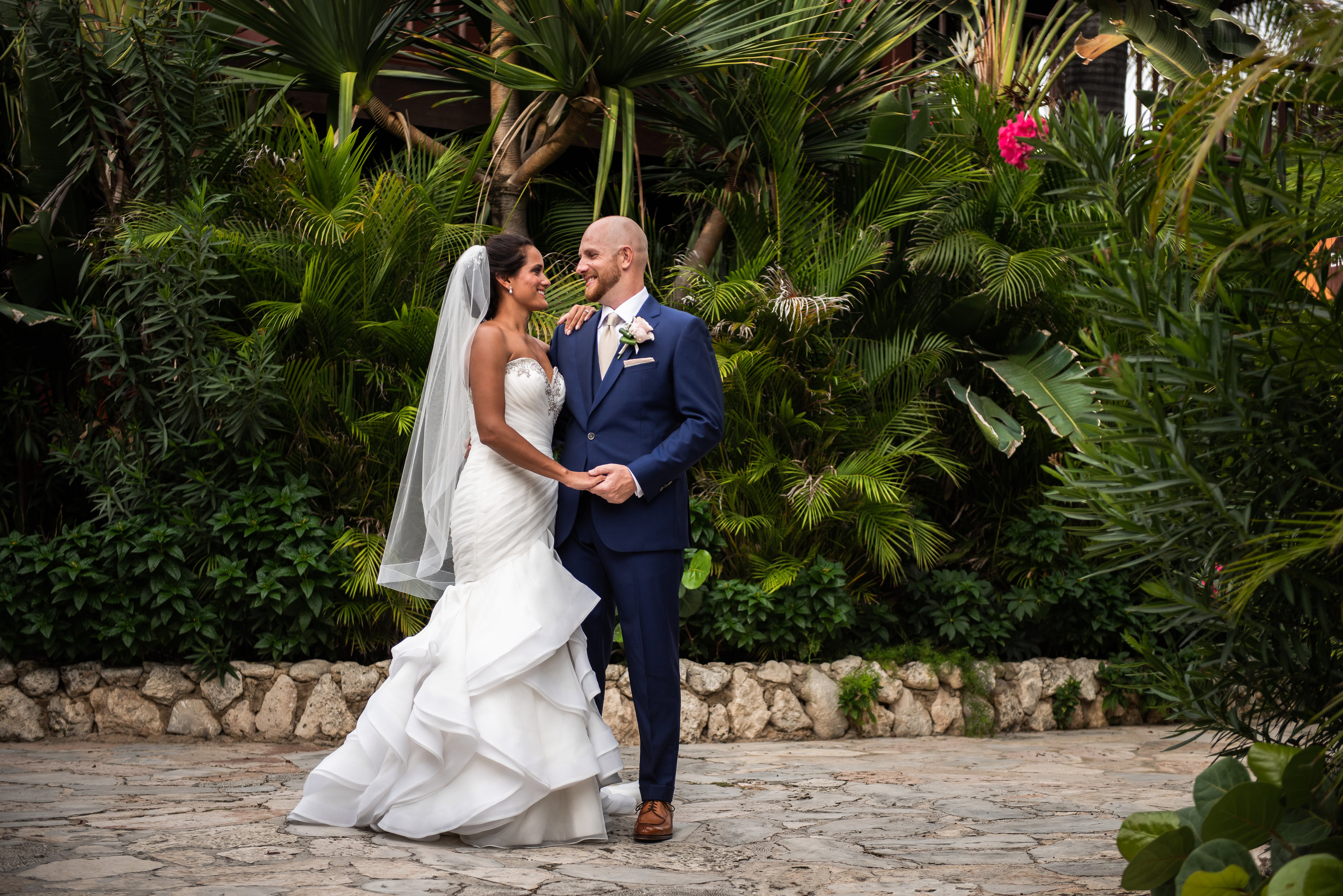 vacationson said:
- What do you think about grey tweed suit for a wedding?
- What may be the alternatives to grey tweed suit which still can be considered as ivy style?
Click to expand...

Tweed for a wedding sounds terrible. Wear a proper suit. With proper shoes.
- You don’t need to look different, you just need to look good. -

archibaldleach said:
^ Hi, and congratulations on the wedding. I don't love the idea of tweed for a groom / wedding party, but a nice blue or grey Donegal tweed is probably the way to go is you choose to go down that path (and winter with snow kind of is the season for it). That look to me also begs for a white oxford cloth dress shirt and some sort of wool tie. If you want to dress a bit more formally, a woolen flannel suit would work well seasonally.

If you're in a tweed suit, you have a bit more leeway on shoes. I wouldn't wear something that could be described as a clunker, though. A sleek derby or perhaps monkstraps would work well. It's not traditional, but then neither is a tweed suit.

Ambiguous dress codes can be problematic, so you're going to want to be careful how you phrase it or inevitably people are going to show up without wearing a jacket (yes, it will happen: assume a fair number of people will just assume it's fine to dress less formally than asked). You probably want to at least specify jacket and tie, and need to be prepared for some folks to wear a suit and be dressed more formally than the groom. If you're okay with that, carry on.
Click to expand...

Thank you for in-depth answer!

I don’t know if it’s a good place for such a question, but how can I find out about trunk shows in my city?

You mean grey or navy wool suit with oxfords?

marker2037 said:
I got married in July. Pics came in recently.

Best day of my life.

I only wish I would have noticed my pocket square slightly off kilter. Oh well.
Click to expand...

Also want to know what do people here think about spilt toe derbies here. IMO they look great, but it’s not considered “traditional”

Also want to know what do people here think about spilt toe derbies here. IMO they look great, but it’s not considered “traditional”
Click to expand...

I don’t know if it’s a good place for such a question, but how can I find out about trunk shows in my city?
Click to expand...

Also want to know what do people here think about spilt toe derbies here. IMO they look great, but it’s not considered “traditional”
Click to expand...

I got married on the beach. Black shoes could not have been more out of place if you tried.

marker2037 said:
I got married on the beach. Black shoes could not have been more out of place if you tried.

If you are doing the traditional inside church and fancy indoors reception, then sure. But for my location, all outside, all on a beach basically, I actually needed to look less traditional. I still kept it traditional in a sense, but I put my spin on things and wore what I wanted to that fit the mood and theme of the wedding.
Click to expand...

mitchellc said:
Just realized that you replied last month. I'm hoping that I have sufficient time to resolve any sizing issues ahead of the wedding. I should have about a month and a half buffer between first delivery and the wedding.

--
I also picked up the cufflinks below, which may be a bit more daring compared to the otherwise neutral and totally unoffensive navy wedding suit. They will mostly be obscured by jacket sleeves anyway. They're made of sterling silver and malachite, and the malachite's border is black rhodium.

As an update, one month out, and everything has arrived except for the braces! Woo! I'll snag some pictures if I get home early enough to change into the suit with some daylight.

Summary of the MTM stuff:
- Suit: Beckett and Robb Three piece: Notch lapel, 1 button jacket, double-breasted vest, flat front pants. I used one of their lighter weight navy stock fabrics because my wedding will be in Florida. The total cost all-in was just shy of $1200. I think that it fits well; still debating on whether it fits great. I'm going to wait for the braces to arrive to see where the pants hold up. I think that the pants can be shortened just a smidge.
- Shirt: Brooks Brothers Custom: Unquestionably the best fitting shirt I've ever worn. I've got some weird combo of neck circumference/arm length/torso that makes me happy if I can fit 2 out of three off the rack. This shirt hits all three, and I was able to get the shirt out the door for about $130 (white french cuff). Definitely coming back for more shirts.
C

Florida wedding in an industrial-style venue.

I’d go with white pocket square for you, tartan for the groomsmen. You can wear your family tartan as your socks. I’d also go with a grey (silver) tie, not black.
- You don’t need to look different, you just need to look good. -

Shirt: Ended up exchanging a recently purchased BB shirt for a white french cuff shirt. I'm going to use my grandfathers cuff links (as a nod)
Shoes: Searched for black shoes today while at Nordstrom rack.
Bruno Magli Martico (black) for $199
https://www.nordstromrack.com/shop/product/711094/bruno-magli-martico-cap-toe-leather-derby-wide-width-available?color=BLACK
HSM Springfield Oxfords (black) for $75
https://www.nordstromrack.com/shop/product/1895659/hart-schaffner-marx-springfield-oxford?color=BLACK
I began wondering if I need to buy new shoes. Would Magnanni Brown Oxford Brogues work well? They're my most comfortable dress shoe. 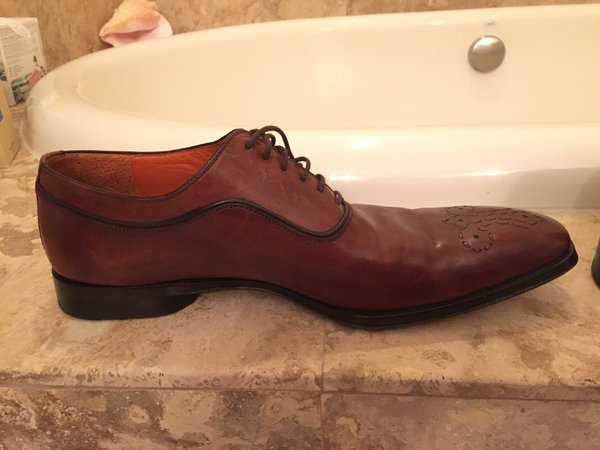 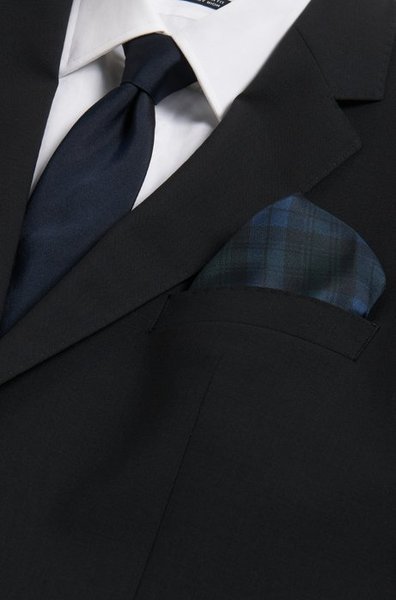 Still looking for the right tie...

Just got married... Always said I'd get a bespoke or at least mtm suit, but was a short engagement (6 years+ together) so didn't have enough time in the end sadly. Therefore not too happy with the end result in terms of fit. Everything else, I'm happy with and besides, it's not exactly the point of the day!

Hardy Amies RTW suit, admirably altered by Pinnas and Needles, but there was only so much they could do with the arms, whilst keeping the pattern matched. They look perfectly neat when held at my side now at least.

Turnubll and Asser Classic shirt worn with MoP cufflinks bought by my now wife, to wear to the Oscars.

Loake 1880 burgundy strand, with patina and polish from Steven (Shoeshine UK) at the Hilton, Park Lane. Pantherella socks. Turnbull and Asser boxer shorts. Only the best on your wedding day.

Seiko Sarb033 on burgundy Hirsch strap and anemone for my buttonhole.