chick in the blue likes her hair pulled. And she digs turkey.

and I am pretty sure someone drew dicks on her shirt...

otc said:
and I am pretty sure someone traced dicks on her shirt...
Click to expand...

FTFY
“Anything is possible in the life of a man if he lives long enough. Even maturity.” -Howell Raines (from Fly Fishing Through The Midlife Crisis)

Vitamix = soup, smoothies, nice emulsified sauces. We make a spinach, kale, parm sauce for pasta with ours and the speed helps nuke fibers in the kale so well. Soup to nuts with that thing.

yeah we actually keep ours hidden in plain sight. Means it's always plugged in and ready to go for quick vinaigrettes and other quick tasks. Haven't set up the food processor in years.

I will say...this thing is BIG.

I mean, I've seen and handled them in stores, but you still don't realize how big it is until it is sitting on the counter next to your puny old blender.

otc said:
I will say...this thing is BIG.

I mean, I've seen and handled them in stores, but you still don't realize how big it is until it is sitting on the counter next to your puny old blender.
Click to expand...

I got a Ninja with the processor bowl so I could eliminate a separate FP. But somehow I have less space because it too is big!

Vitamix now has a pretty dope looking food processor attachment...but it costs $200 and from what I saw at Costco, it isn't exactly small.

otc said:
I will say...this thing is BIG.
Click to expand...

Thats NOT what she said to otc!

Okay you guys are giving me ideas. I think I'm going to make turkey roulade with sausage stuffing as the stuffing.

cb200 said:
Vitamix = soup, smoothies, nice emulsified sauces. We make a spinach, kale, parm sauce for pasta with ours and the speed helps nuke fibers in the kale so well. Soup to nuts with that thing.
Click to expand...

As an experiment, I threw some old leftover roast vegetables (mostly potato and butternut squash) into the vitamix, added some chicken broth....6 minutes later I had a delicious and steaming hot soup.

The leftovers were older than I'd consider safe to eat...so I only had a couple bites before tossing it...but it was delicious.

Now I am curious about this spinach/kale/parm idea.

The kale sauce was mostly from the cookbook "six seasons" by Josh McFadden.

Boil salted water. Add garlic to oil and get some color on them on medium heat. Depends on your taste - you can go pretty tan with the color. Blanche Kale in salted water for 4 minutes, then add spinach blanch let the two blanche another minute. You want things soft. Kill the heat on the pot.

Scoop/tongs the spinach to ice bath or cold water. That can be a bit of a pain if you got baby spinach. Kale goes into the blender. Don't worry about drying. Dump oil and either none, one, or all of the garlic cloves, depending on your preference, into the blender along with the spinach. Add 1/2 of parm to the blender too.

Bring pot to boil and add pasta. Same pot that was used to blanche.

Blend the kale and oil cheese sauce until smooth but still thick. Add salt and pepper. Taste and correct with salt. Remembering there's more cheese too follow. Sometime a bit of lemon juice is needed to lift things as bit.

Cook pasta until short of where you want the pasta to be tooth wise. Drain and reserve some of the pasta water. Return pasta to pot. Add sauce and toss adding some of the pasta water if needed to loosen. Need to reduce it a bit? Add some heat. Toss and coat the noodles. You should have a pretty vibrant green sauce. When it's looking like a good consistency pull it from the heat and toss with some more cheese. Serve with a drizzle of Olive oil. Cheese and fresh pepper to taste of the eater.

This is one way my niece will eat half a pound of kale and not even think a veggie was involved. Spinach is mostly for color. So it and or the ice bath can be skipped without much worry.
Last edited: Oct 20, 2020
L

cb200 said:
Details. We'd have Sunday dinners at my Nonna's house when I was little as we lived in the same city. I knew her food was different than my dad's English side of the family. Knowing my great grandparents came from Italy I just kind of thought her cooking was Italian food.

For antipasto there'd be cured meat and pickled things. Polenta and some sort of long braised meat sauce on top was standard. Sometimes chicken, sometime beef sauce with it... maybe there was surprises from the butcher or a hunting uncle that I wasn't told about. Sometimes the Polenta was soft. Sometimes it was sliced after dramatically getting dumped onto the table onto a big board and cut with a string. Maybe Risotto with peas instead of polenta. Risotto with ham and tomatoes. Pasta with beans (fagioli?). Sometimes pasta with tomatoes and the rendered fat of a bunch of chicken legs.

Summer squash in olive oil or simple veg with a simple broken down roasted chicken on the bone was normal or some beef or veal. Then a very acidic for my young mouth salad that I'd have to ask for cheese on if I was going to "Mangia Mangia" and get desert. Then desert, pastry if it was anywhere near someone's birthday, fruit... ice cream for the kids. Coffee for the adults. Grappa or whisky for the men if someone brought it.

Seasonal meals like Christmas were always a big get together and leaned on North American traditions, but there would be some glorious deserts that made special appearances. My favorite was called " Crostoli" by my family but I think it has lots of names. Honestly those cloud all my memories of those get together completely. Crisp fried twists of dough with powdered sugar and flavored by anise oil or seeds. Sadly, since that generation has passed no one seems to be able to recreate them the same way. And Panatone!

Nonna was first generation born in North America and raised a family pretty much single handedly. So she'd still pull out a meatloaf, made meatballs, and make a cheese "sammich" for me if I was hungry and would lean on industrial food processing technology of the era. I knew that was normal food as other people ate it. The other stuff was "Italian" and seemed special.

My uncle tells the story of his horror as a kid when my great grandmother added sparrows to the polenta that she caught in the garden. My Nonna wasn't that old school but the core of what she made that was Italian was an extension of her Mother's food and that was simple Northern Italian food made for a family meal.

What I found as I got exposed to more Italian foods was allot more pasta at the center of the meal, stuffed pastas, more tomato sauces, more spice / heat, more fish, more garlic.
Click to expand...

Gotta love your Nonna! Which part of Northern Italy was she from?
My Nonna (grandma, for English speakers) too liked to have her family at desk on Sundays.
Truth be told, we weren't the most polite family and so the 'lunch at noon' was interpreted with some freedom; add that often some Zio (uncle) came with a friend - or more.
The antipasto was usually of salame, or soppressa (a larger salame, with pork not so finely minced), or ossocollo (pork meat, usually from the back ot the neck [collo = neck], rolled, spiced ant then left hung in a cool room to season) and sottaceti (cubed vegetables, first shortly boiled in water and then put in a brine of vinegar + water and a little spices. All these were cold dishes, so they were always ready.
The real trouble were the following courses.
For me it would have been a quite difficult task to manage, but Nonna usually, early in the morning or even the night before, made a good spezzatino (meat cut in little cubes and braised for hours in tomato sauce with aromes), and polenta as a side.
This was the core of the meal. Those who arrived late didn't get pasta or risotto, as these dishes don't wait even for royalties, but a good warm spezzatino over a generous spoonful of polenta can be served at any time and be always good.
Salad can be washed and - if needed - cut in advance, so the only thing to do is dress it with some olive oil, vinegar, salt and pepper and it's ready to be eaten (the 'acidic' flavour you mention was much needed after the fat, saucy spezzatino).

I didn't like it too much, but often we had polenta e osei, where the latter were little birds hunted by some friend.

"Mangia mangia" ... parents were always afraid that their offspring wasn't eating enough so urged us "eat, eat", under the penalty of not being allowed to have the cake at the end of the meal.

God bless our Nonne - they weren't chef, but no one ever left their tables unsatisfied, no matter how many or how late one could come.
L

Thrift Vader said:
The seafood linguine from yesterday
View attachment 1477616
Had my wife reeling in disbelief. In fact she got mad at me for not making it until now. The foods i remember are good.
She said it "was the best pasta in her life, and people would pay 12usd for it" -It was accompanied by a white wine. She said it felt like her birthday, only better.
I'm not Italian. but i get it. Now just to get better at it.
(next time will be pan finished)
Click to expand...

I (o Dad, forgive me) am not fond of seafood, but I can see that your linguine aren't lying in sloppy sadness on the plate. This means that you drained your pasta in that right moment, when it's cooked but still 'springy'.
Well done!

Luigi_M said:
I didn't like it too much, but often we had polenta e osei, where the latter were little birds hunted by some friend.
Click to expand...

what type of birds do you know? 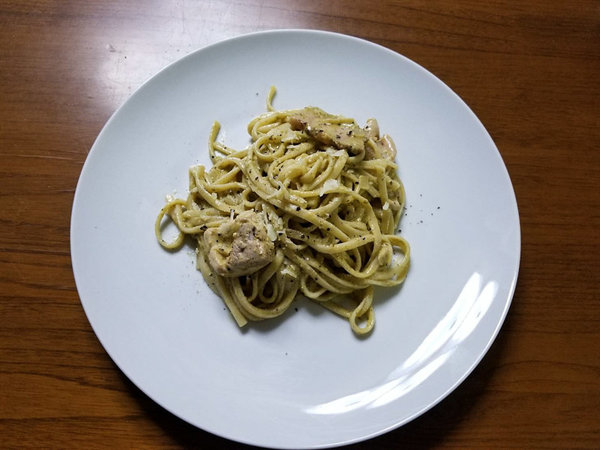