...not all sizes but a couple of classics..Burford and Bourton in Espresso and Marron..?

All the fours, from the outlet 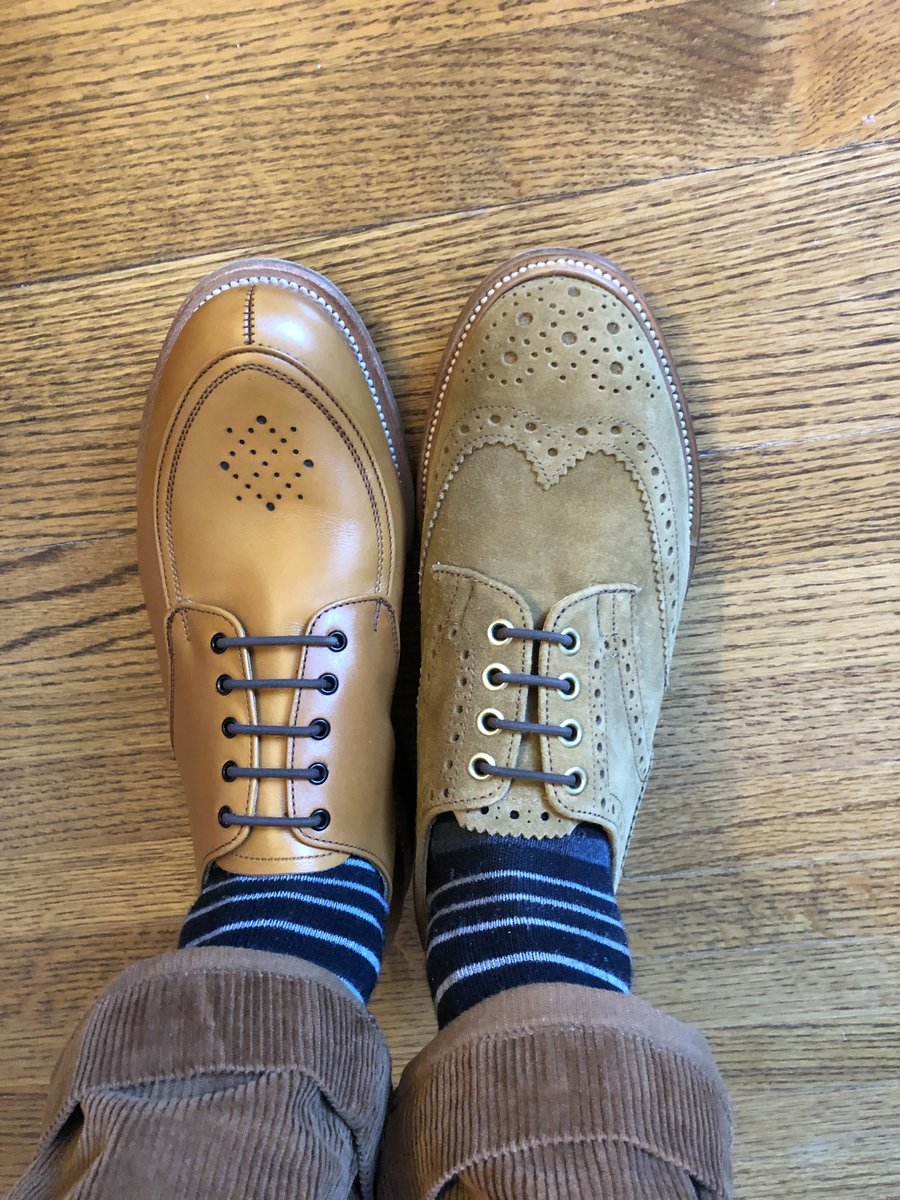 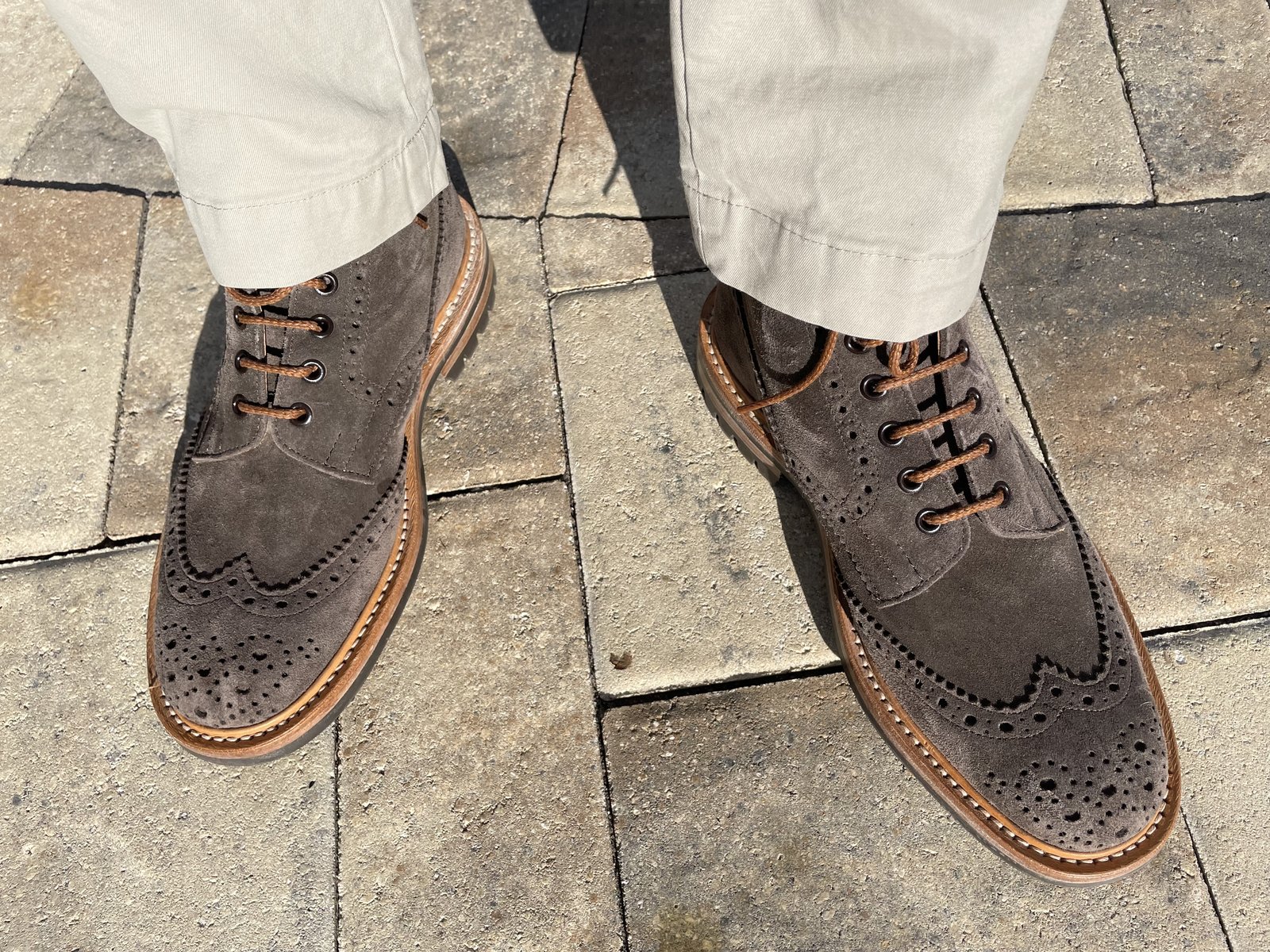 As Division Road gets set to launch their Crockett and Jones line, I’ll have the good people on here know that the DR x Trickers monkey boots seem to have appeared on the Outlet site in a few sizes. Black and Natural CxL.

Mr_Spud said:
As Division Road gets set to launch their Crockett and Jones line, I’ll have the good people on here know that the DR x Trickers monkey boots seem to have appeared on the Outlet site in a few sizes. Black and Natural CxL.
Click to expand... 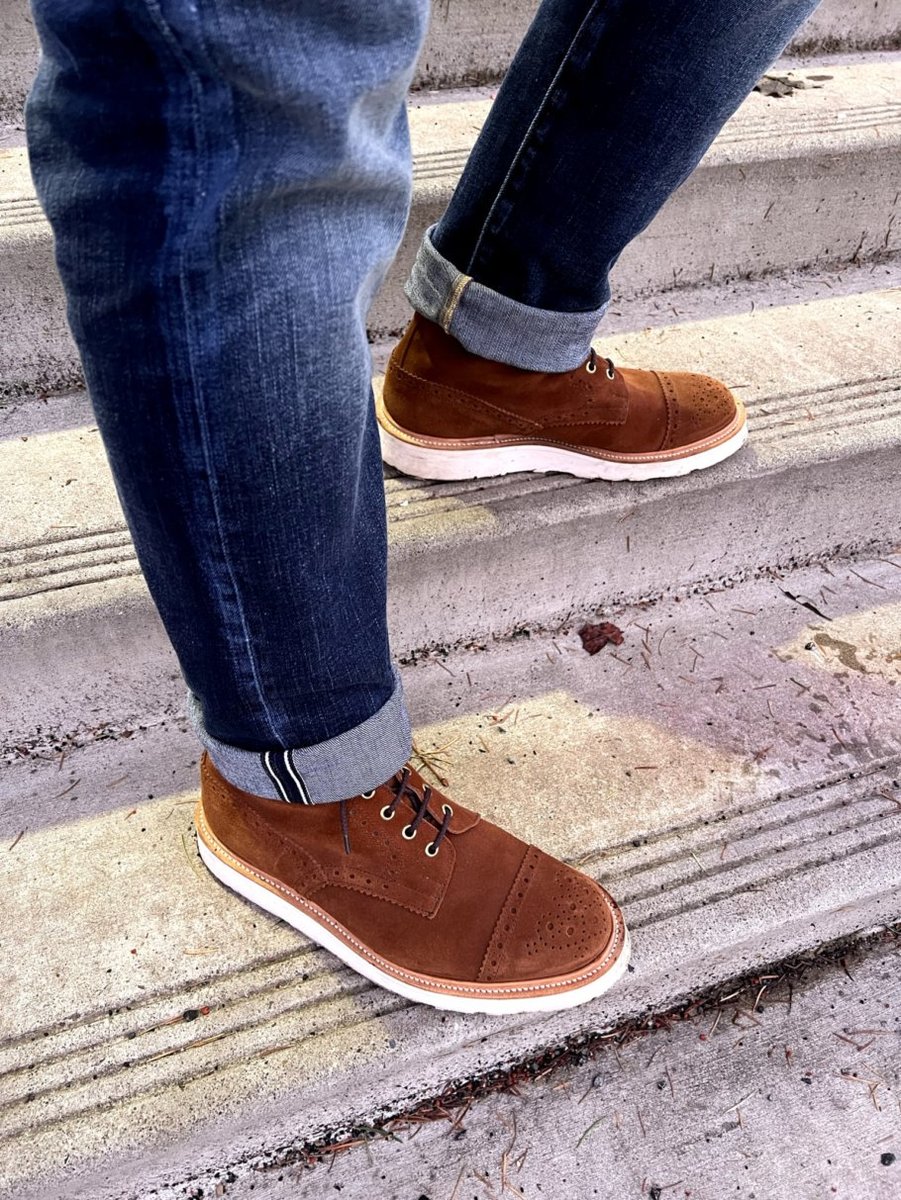 Tricker's Bourton vs. Grant Stone Longwing showdown
So I happen to have recently purchased two similarly styled shoes and thought I'd do a little head to head.

Build
These are just my general impressions so don't be upset if you don't agree with them. Both have a similar build quality if construction is a bit different. If both were on the same sole I'd say the GS would be a tad heavier but with the thick commando sole the Bourton is a bit heavier; Both are solid and heavier than brands like Allen Edmonds and Carlos Santos. The overall SPI goes to GS including the welt, sole and upper. The lining seems about the same in regards to SPI but the Tricker's uses a single layer gusset tongue and the GS uses a lined standard tongue. The handling of the lining is different as well as the Bourton you can see the upper pattern on the inside but on the GS you can not.

I don't know enough about leather quality to know if one is better than the other. I do like the French calf on the GS longwing a bit more. It has a tighter grain and seems like it will show creases less (I've worn these a few times) The pinking and perfs seem about equal if handled differently; Tricker's uses black polish along the pinking and perfs which give them a more finished look whereas GS leaves them as is as far as I can tell. The binding used around the collar is wider on the GS than the Trickers and the heel is handled differently (see photos). The GS has the leather around the collar rolled out while the Tricker's seems to have it rolled in and tighter giving a cleaner look I prefer how GS handles the heel as there is likely less chance or rubbing (speculative). The storm welt on the Tricker's is finished very well so that you can barely see the joining whereas the GS is noticeable; the fudging on the GS is a nice touch but that may be more to the style of shoe longwing vs country shortwing as are the eyelets and laces (no shoe bags with the Tricker's). Either way I am happy with the quality of both shoes.

Fit
In theory these are the same size, equivalent to a 9US but the Bourton is a bit shorter overall than the GS longwing. The biggest difference obviously is in width with the EEE GS being a good deal roomier which is better for me (I'll have to try a 6 Fit style at some point). Bourton's are supposed to have heel slip but for me I didn't find that to be the case, the heel is a touch narrower than the GS which I prefer and it feel like there is a hair more room in the instep which I also prefer (this could also really depend on the sole as I have some heel slip initially on GS's thick leather sole/midsole). I did not find there to be much less width than a 9.5 US EEE Allen Edmonds 511 last shoe.

Looks/Style
These are both very attractive shoes; I am more partial to the longwing style as opposed to the shortwing but I like both compared to captoes or plaintoes. I like the larger perfs on the Bourton and the slightly higher toebox and it's just an iconic Tricker's style like the Stow boot. I like each for what it is.

Value
This will vary I'm sure on where you live but for me in the US these Bourton's were on sale for $325US plus currency conversion (229 GBP) and the list price for the GS longwing is $340 so a wash. At full price obviously the nod goes to GS in the value department but that would be expected in a direct to consumer model.

On to the pictures: 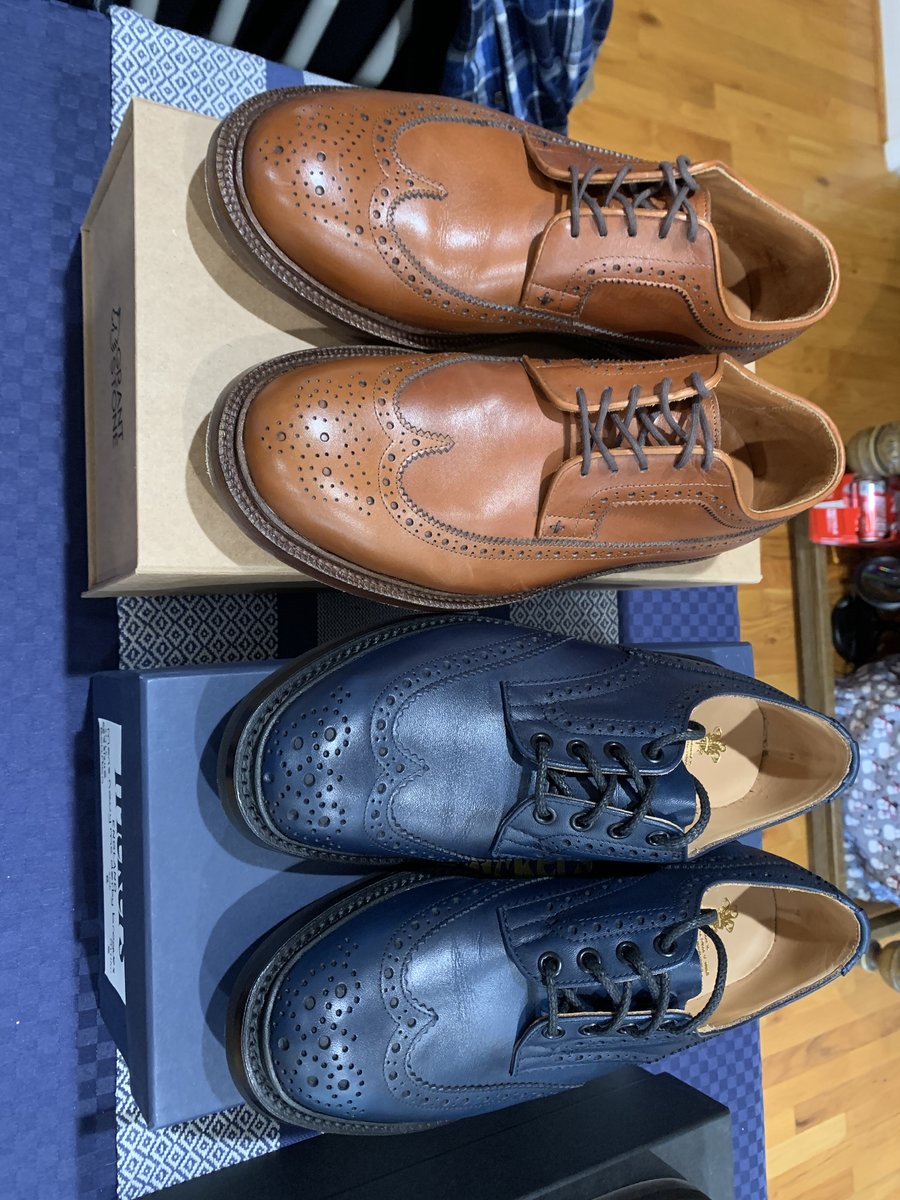 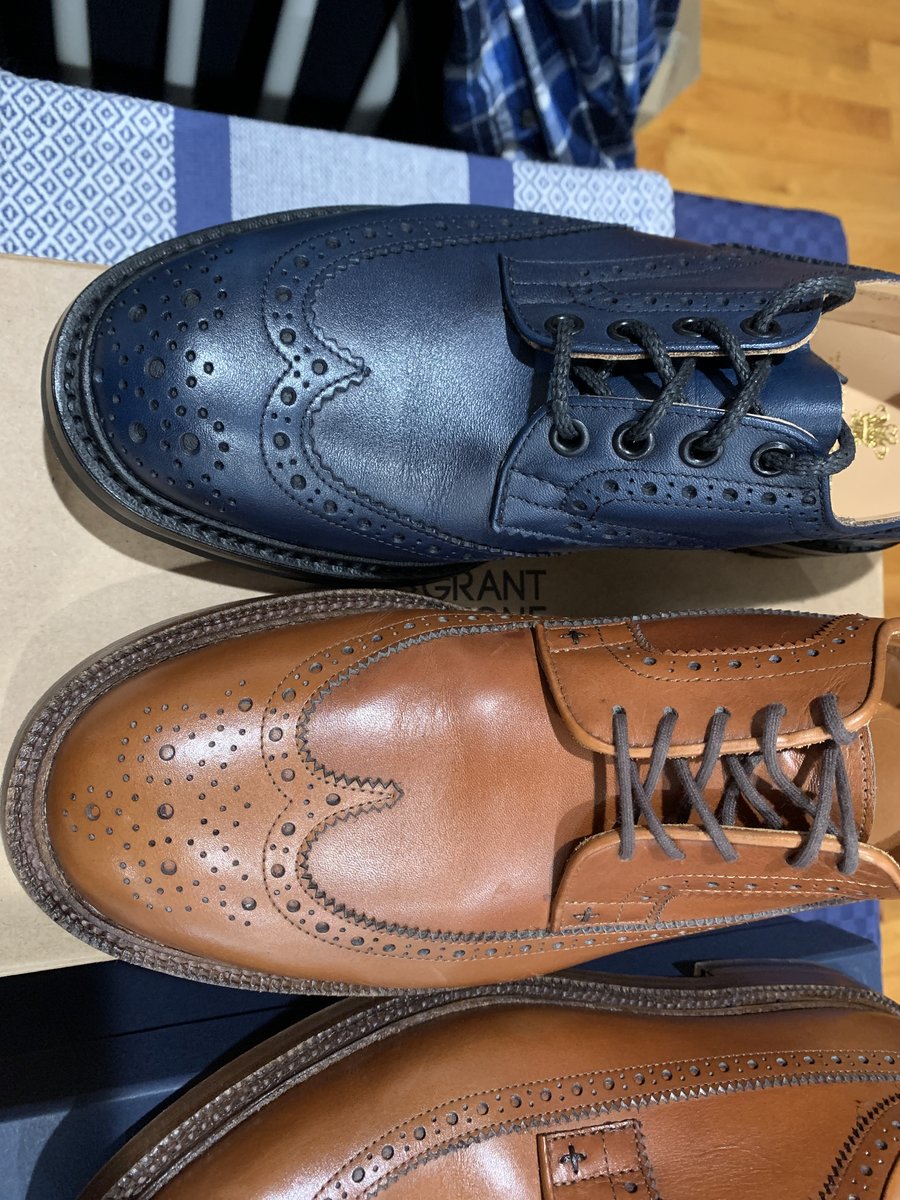 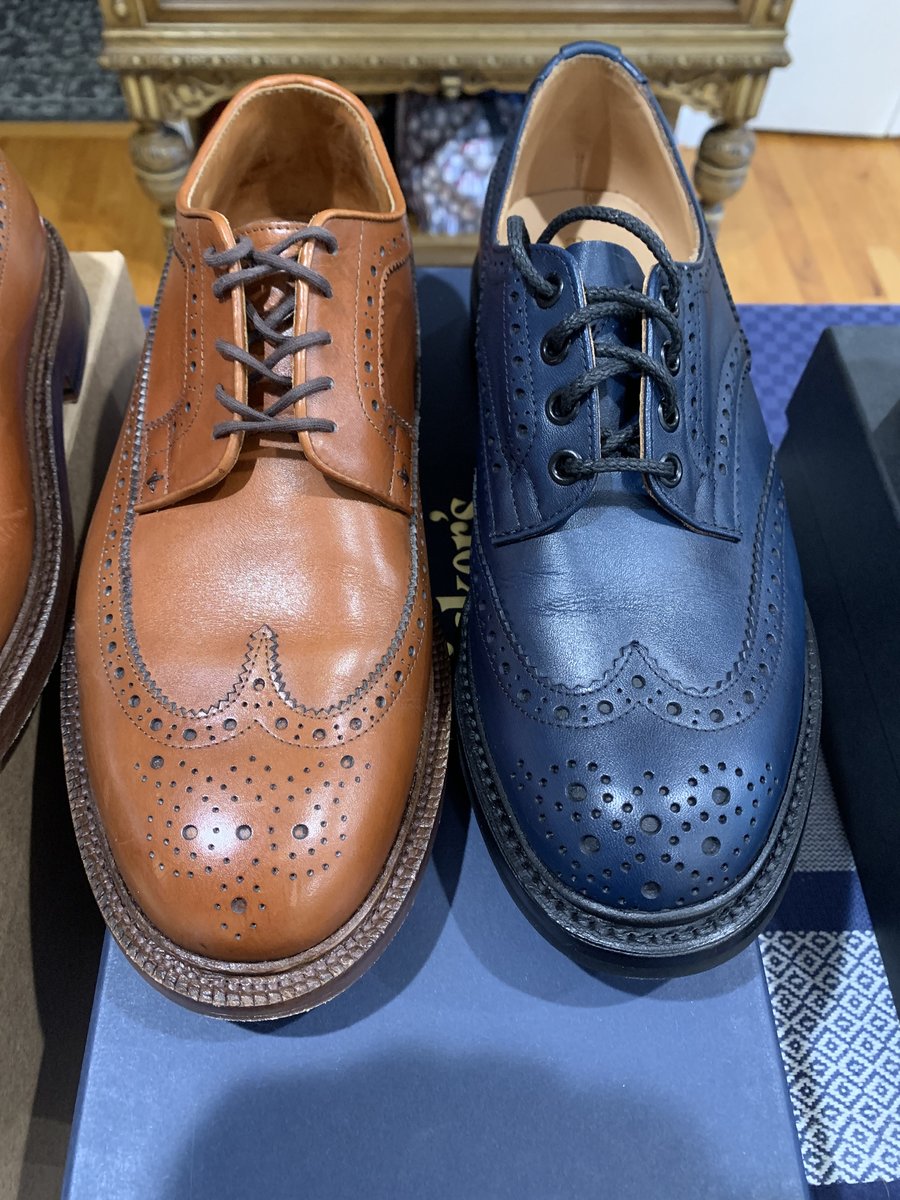 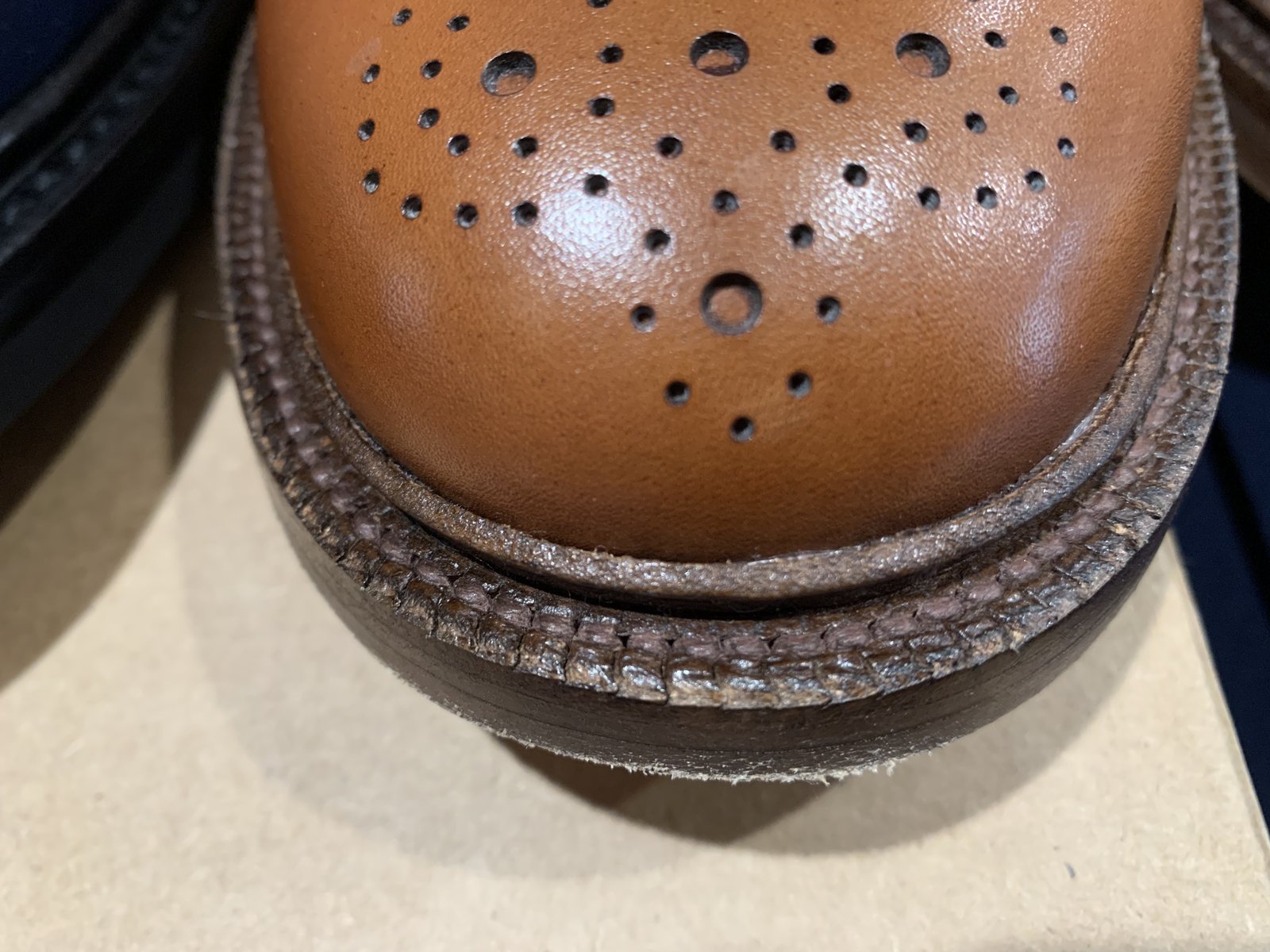 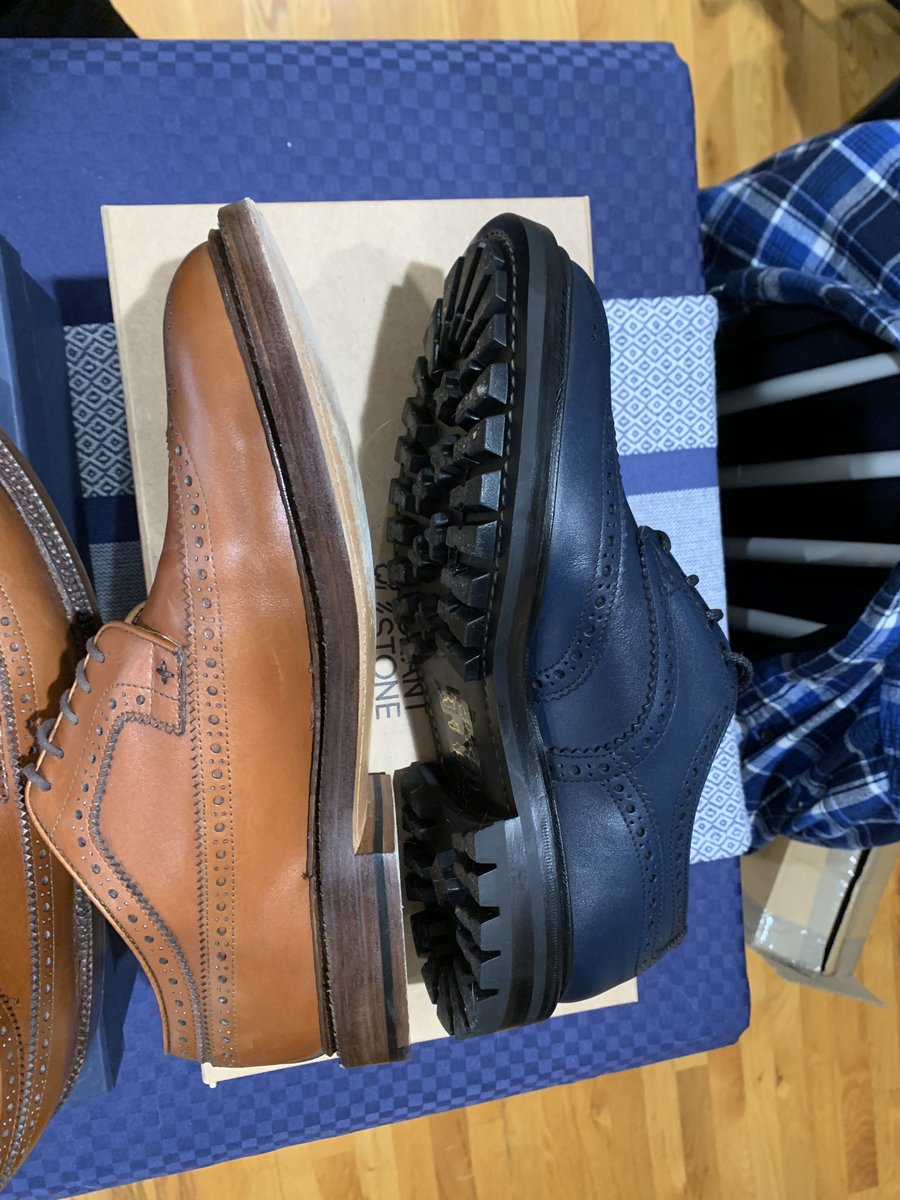 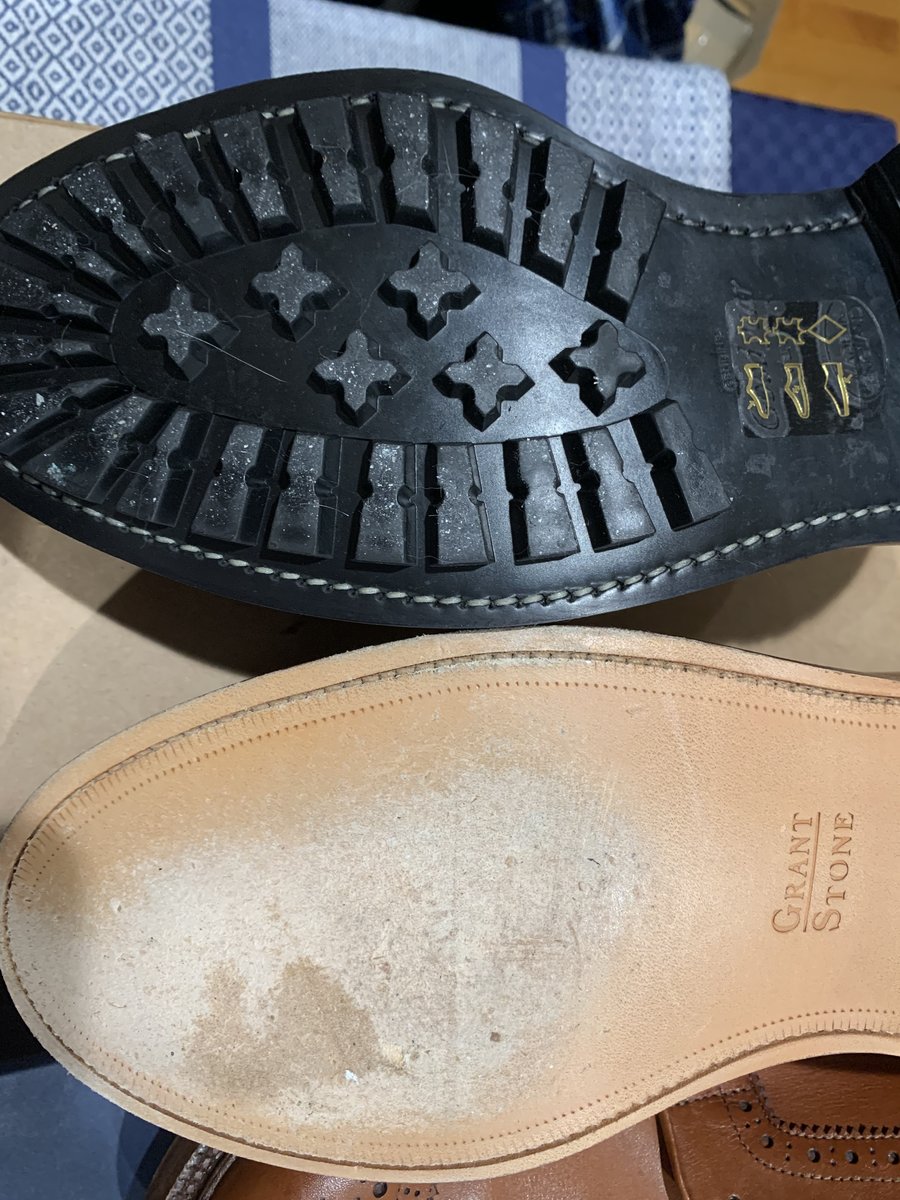 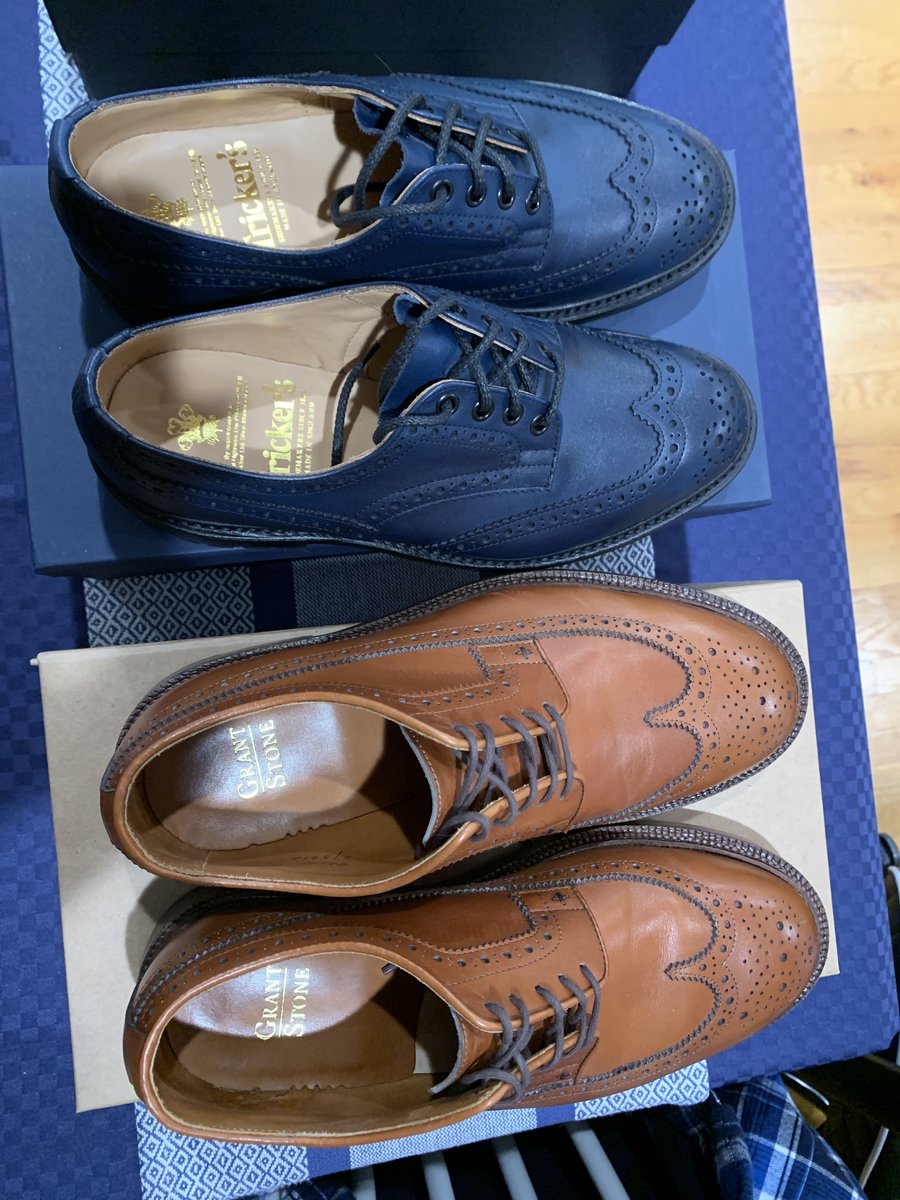 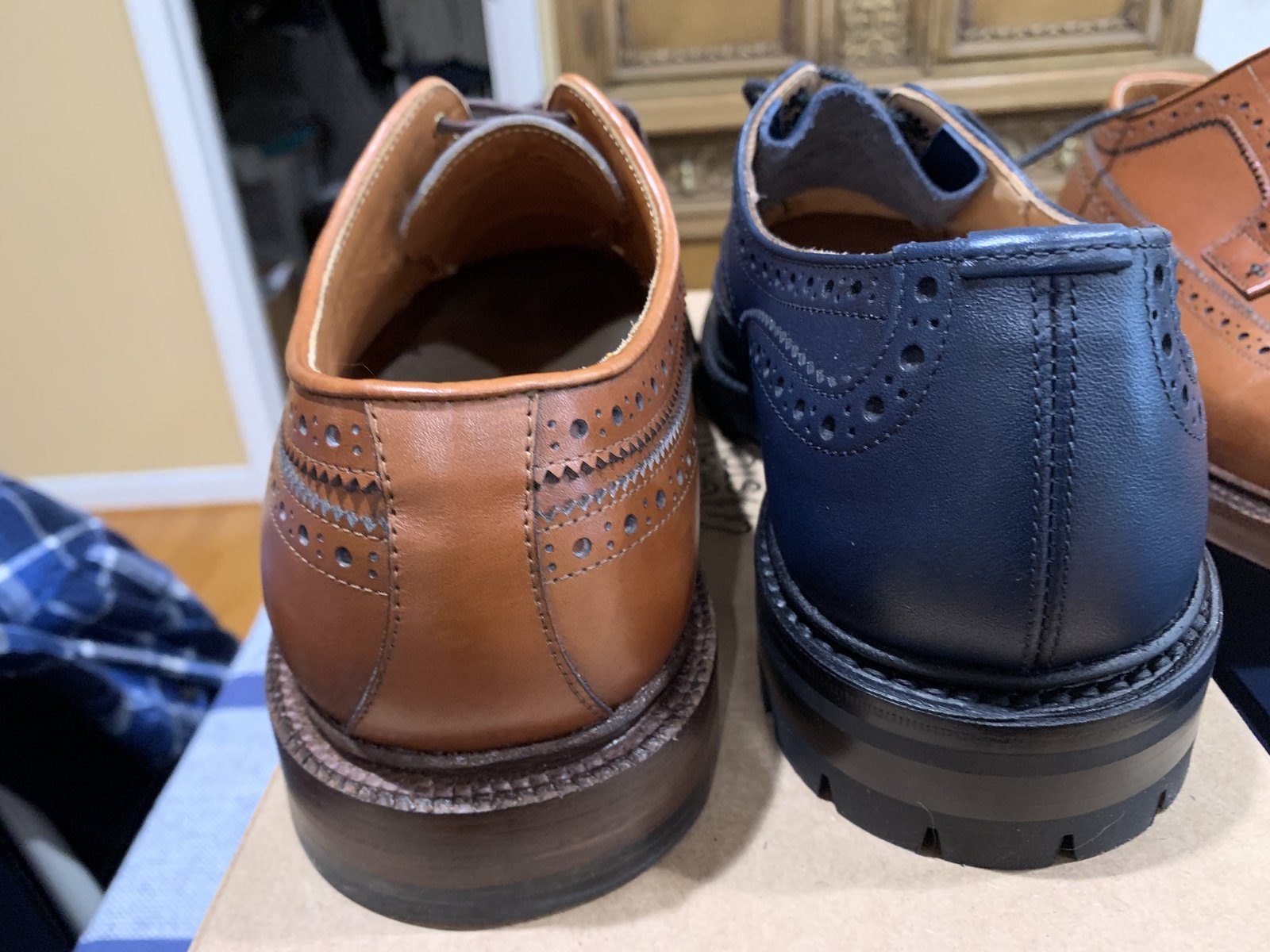 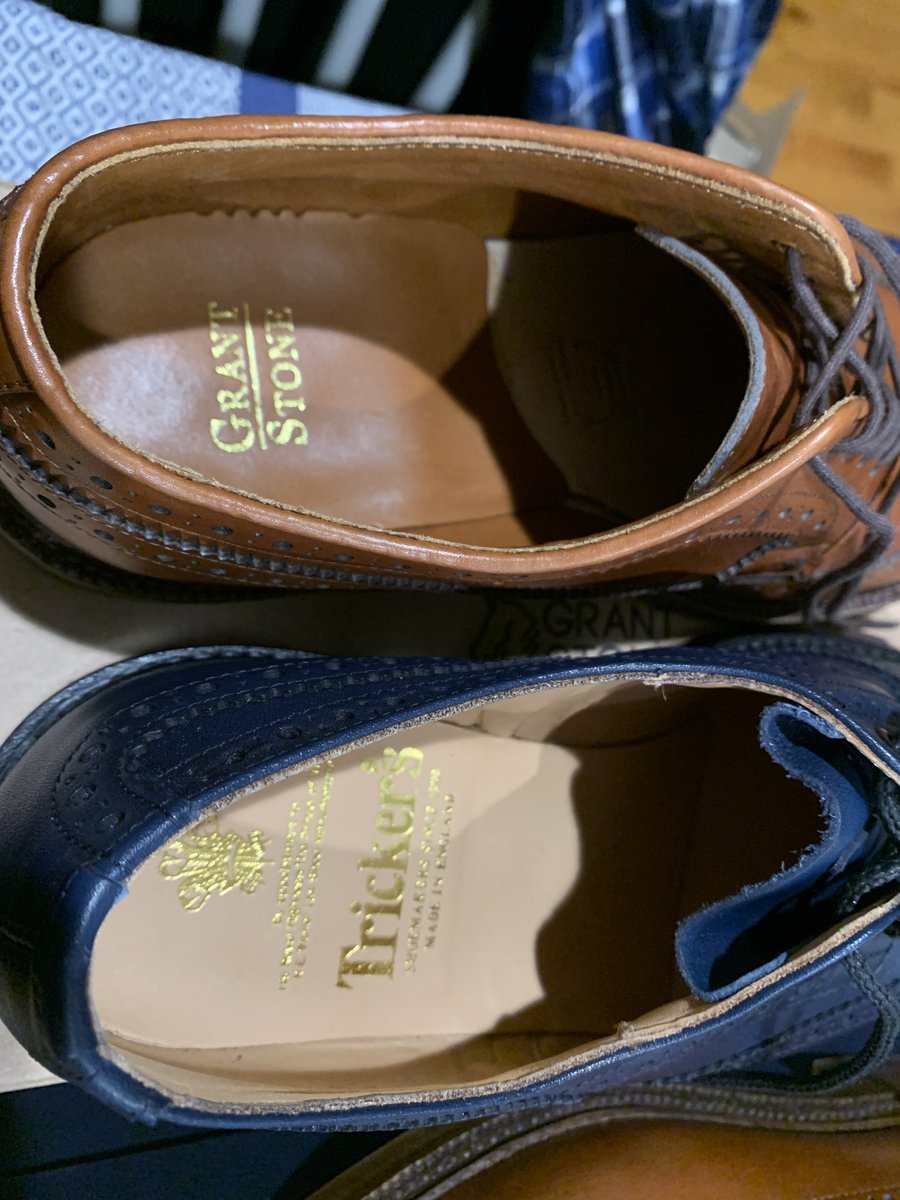 Another random banger. Wish Trickers experimented more often like this....guessing this was a special makeup for a shop... Good afternoon All, I wonder if anyone could give me some tips on stretching scotch grain leather?
I have a pair of Ilkley that seem to be a couple of centimetres narrower than my other 4444's
Last edited: Jan 16, 2022

Running around getting ready for a big predicted snow tonight