As usual, these are NOT MTM orders, simply pre-orders. So no special requests, alterations or modifications. You can order any size between Eu 42 and Eu 60, including odd sizes (e.g. 51 or 47).

Please make sure to go through the Cart page first before checking out, as this is where the Gift Message field is to enter your picks. 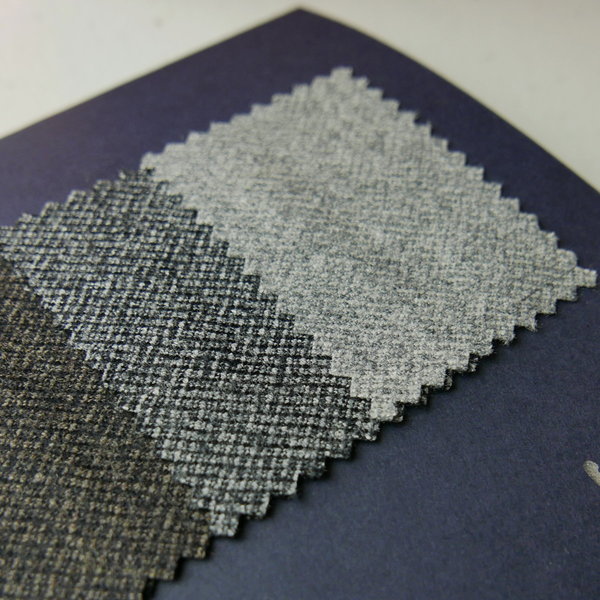 An exciting newcomer this year, and selected specifically for those of you who live in more moderate climates and find our winter fabrics a bit heavy, I found these beautiful micro-patterned wools that are only 270g, available in 5 colors - higher-rise w side tabs or medium-rise w loops 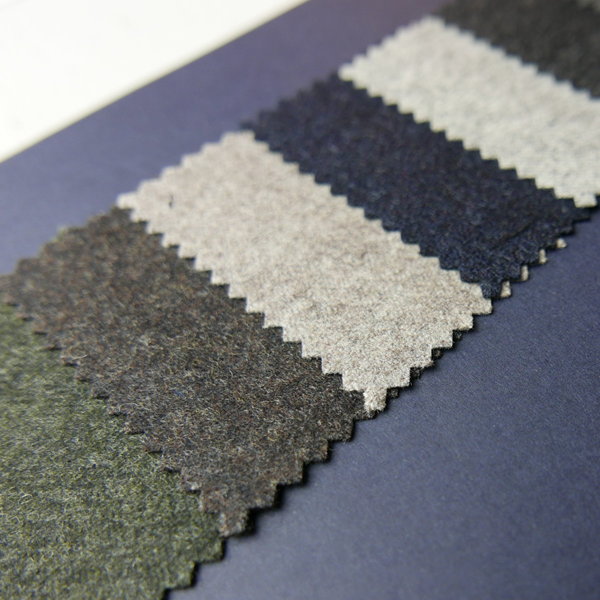 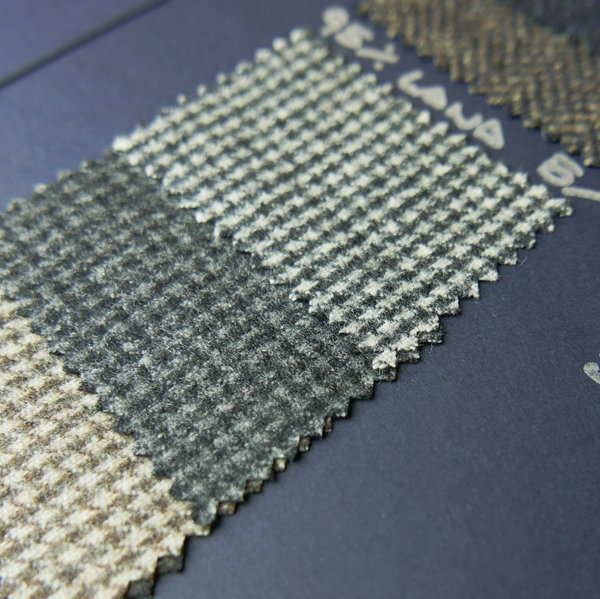 Some exciting patterned flannels - houndstooth and herringbones, including a glenplaid colorway - higher-rise w side tabs or medium-rise w loops 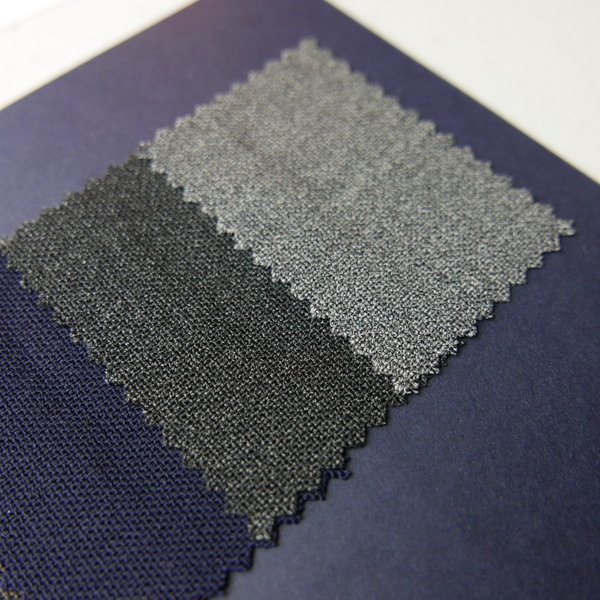 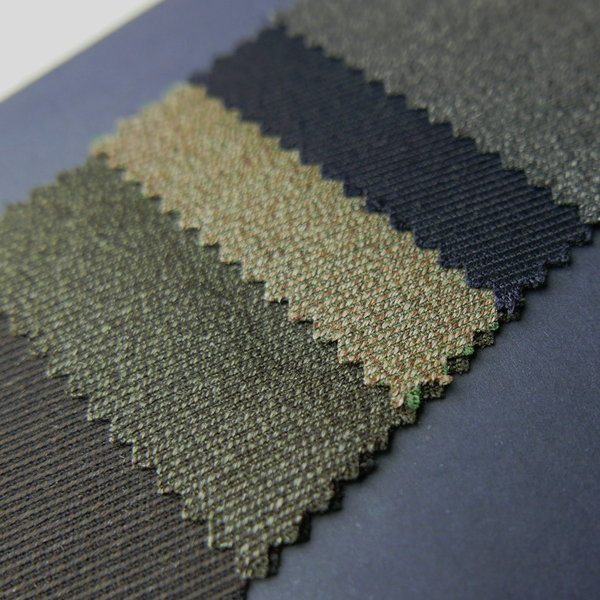 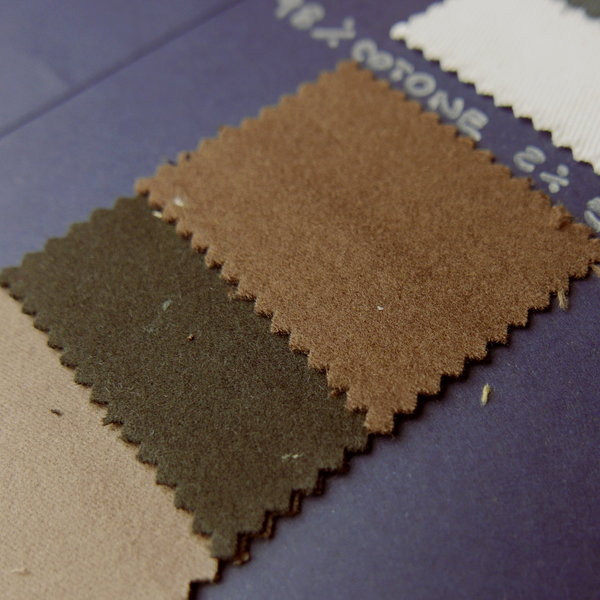 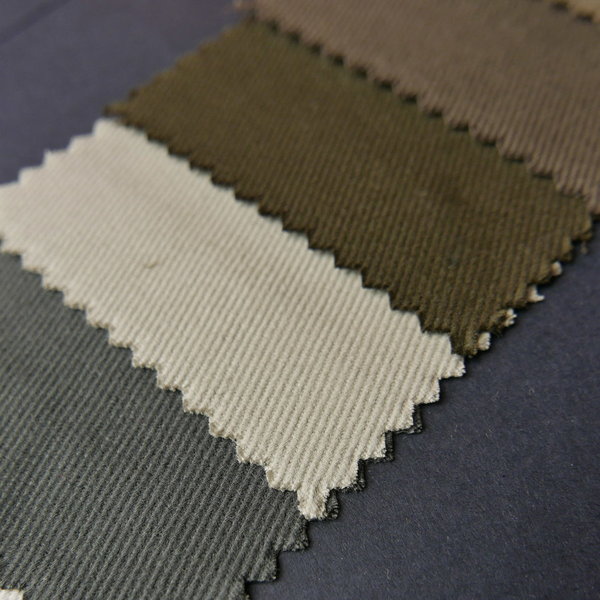 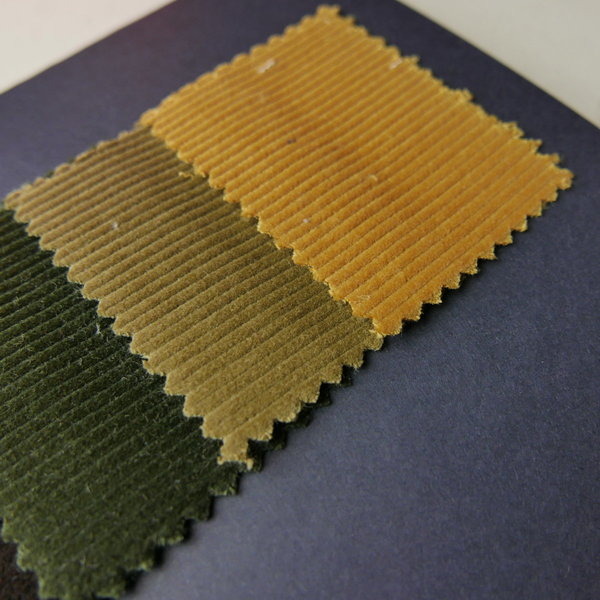 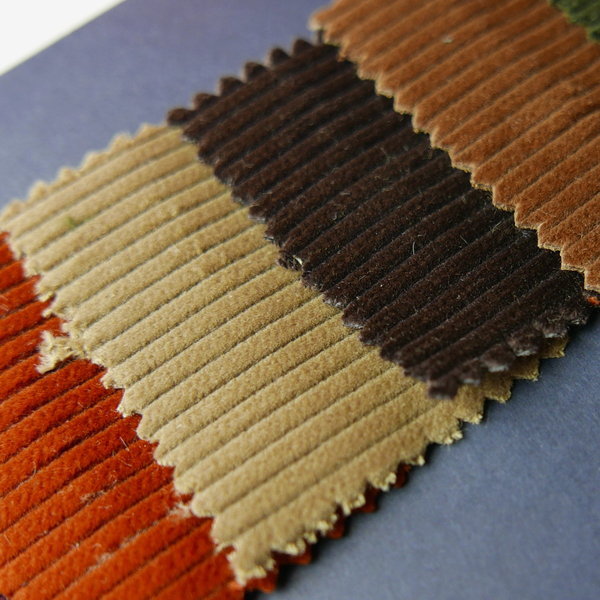 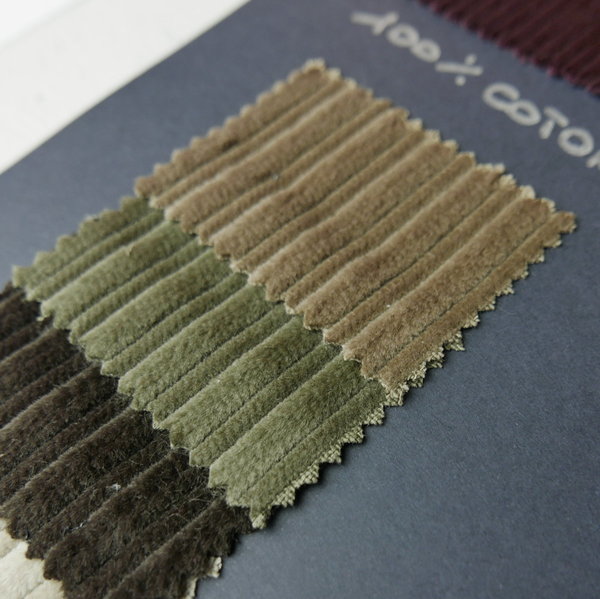 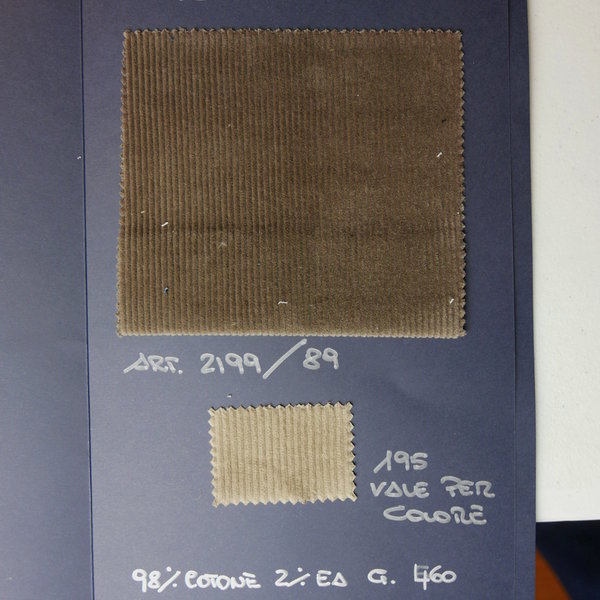 A quick look at all options is at http://www.nomanwalksalone.com/index.php/pre-orders.html


Apply code PREORDER15 at the checkout page
for your pre-order discount!


As usual, these are NOT MTM orders, simply pre-orders. So no special requests, alterations or modifications. You can order any size between Eu 42 and Eu 60, including odd sizes (e.g. 51 or 47).

Please make sure to go through the Cart page first before checking out, as this is where the Gift Message field is to enter your picks.


View attachment 1335995
An exciting newcomer this year, and selected specifically for those of you who live in more moderate climates and find our winter fabrics a bit heavy, I found these beautiful micro-patterned wools that are only 270g, available in 5 colors - higher-rise w side tabs or medium-rise w loops

A quick look at all options is at http://www.nomanwalksalone.com/index.php/pre-orders.html


Apply code PREORDER15 at the checkout page
for your pre-order discount!

Sorry if this info is located elsewhere but what are the measurements for the med rise trousers (specifically the rise measurements)? Thanks!

abkain said:
Sorry if this info is located elsewhere but what are the measurements for the med rise trousers (specifically the rise measurements)? Thanks!
Click to expand...

gdl203 said:
Pick any of the belt loops Rota on our Rota page and it should have measurements
Click to expand...

Thanks Greg. So, am I correct that a 54 in the med rise/belt looped trousers would have a 9.8" rise? I was under the impression that medium rise would generally start at around 10.1" or higher for a size 54 (but could be wrong).

I have 3 pairs of Rota

gdl203 said:
If you’ve never tried the cut and size, I would absolutely stay away from preorders. Preorders are not the right moment to figure out one’s size
Click to expand...

I have three pairs of Rota’s that I have purchased from NMWA and there is some variation amongst them so I was hoping to figure out if the cut is similar to the flannels I bought a couple years ago or the cotton ones from last year that seem to have a lower rise. I’ll just measure my flannels and see if it matches the posted size. Thanks

gdl203 said:
Ok understood. ALL the Rota in medium rise are cut on the same pattern. The only time the fit is different is if the trousers are garment-dyed or washed (like some of the cotton and cotton/linen styles). Everything else is cut on the same pattern so take the same size. Like every garment, there are minor variations (called variance) between pieces.
Click to expand...

Ah got it - thanks. That makes a lot of sense.

Kaptain Sunshine Fall / Winter 2020 Traveler coat​
BY POPULAR DEMAND, we're running a pre-order for the fall/winter 2020 Traveler Coat from Kaptain Sunshine in all four fabrics that they're offering. The Traveler Coat has been a customer and staff favorite for a few years now, as it's a unique take on the Balmacaan or raglan overcoat shape specifically because the oversized silhouette combines with the relatively stiff and sturdy (though soft to the touch) wools that they use to give it a very sculptural shape that drapes in a unique way unlike any other coats we've seen.

For sizing, I recommend true to size although if you don't need the sleeve length a lot of people can comfortable go down one. This will be an oversized silhouette no matter what, so keep that in mind when looking at the measurements.

As always, we're doing 50% now with 50% due upon delivery in October, and be sure to use code PREORDER15 for your pre-order discount. We're keeping these open until the end of the week. 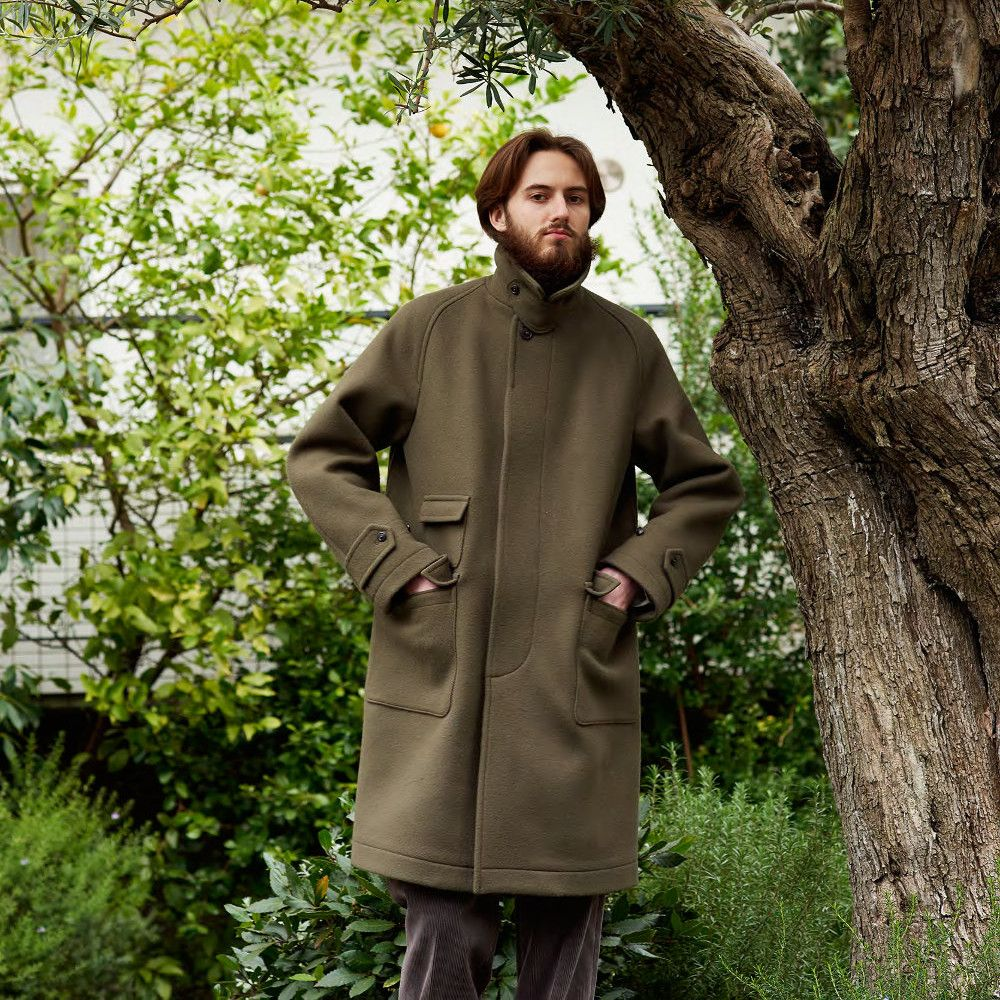 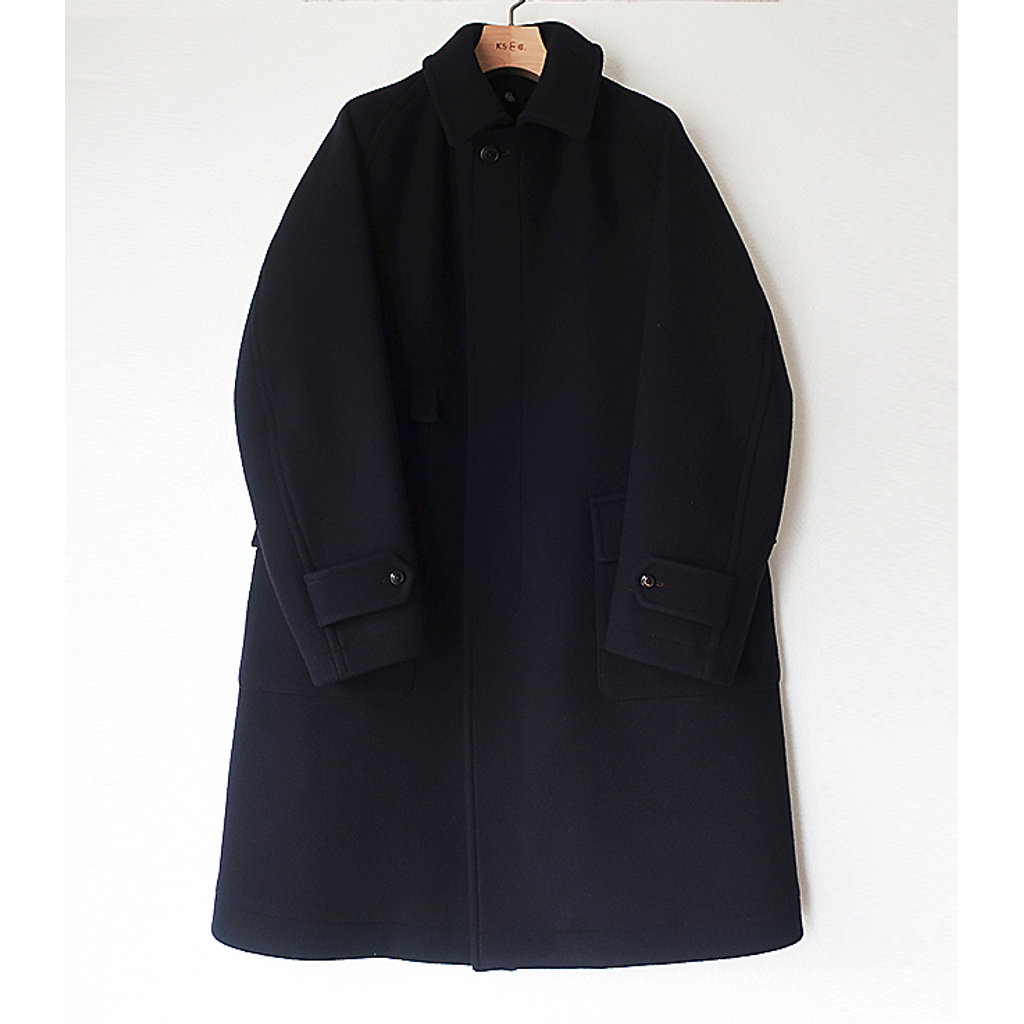 The other two options are a British wool and comes in grey Glenplaid or brown Glenplaid. 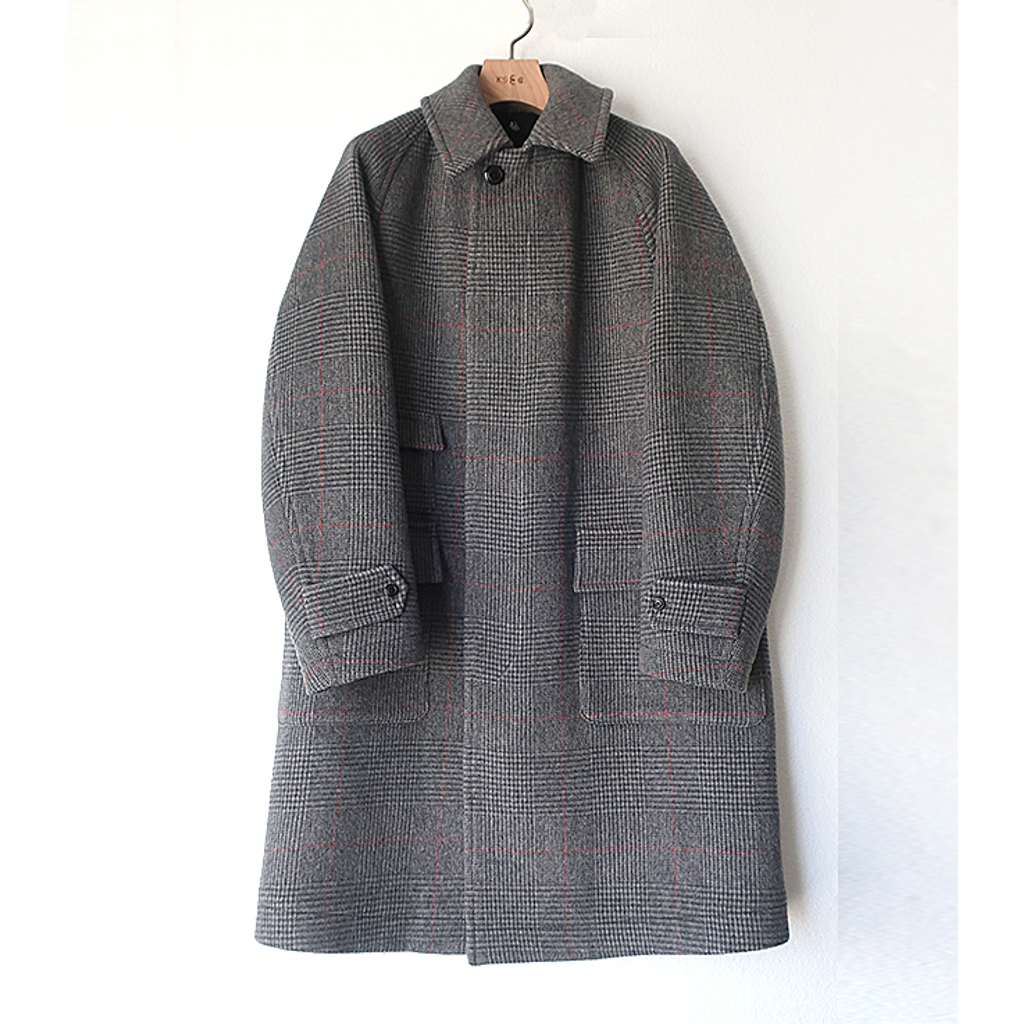 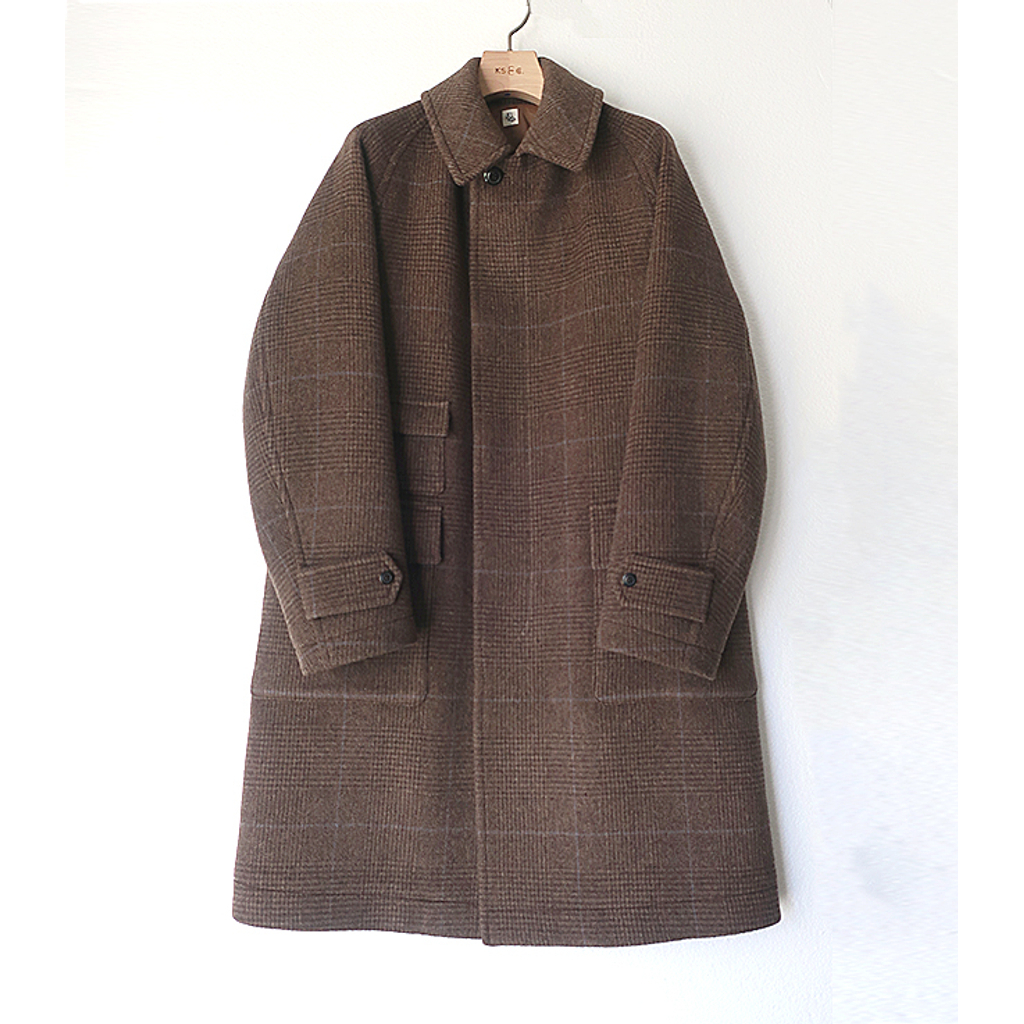 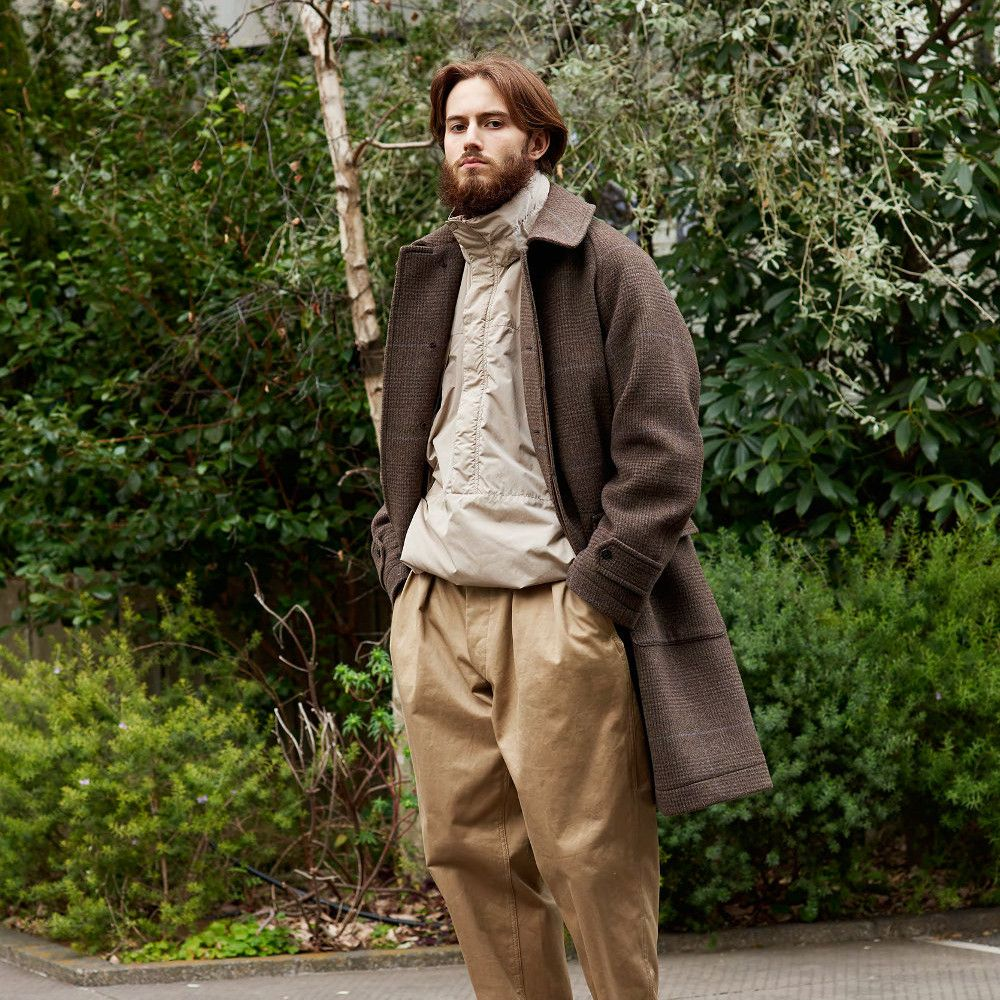 
At long last, we're happy to put up our Norwegian Rain pre-orders, and this is a special one because they have opened up their fabric archives just for us. What this means is an abundance of choices, with some of them extremely limited. Because of this, there is a video where Greg flips through the swatches, and you can see the face of the swatch at the top, and then the name on the white sticker once he flips it over.

If you want to get right to it, all of the pre-orders are here but I will walk through them below and in the next few posts.

The first is called the Nesta Falck, and is a really cool design that is a lot more casual than what we typically see from them. It's got these great patch pockets on the front and has a fixed hood that actually rolls up into the collar when you want to put it away. Overall, just a nice casual design that isn't too long or too short. Weight-wise it's comparable to the single breasted, and does not have the quilted arctic lining.

For sizing reference, in these photographs I'm wearing a size M and I am typically a US Small, although I wear an M in the Single Breasted and Bumfreezer. 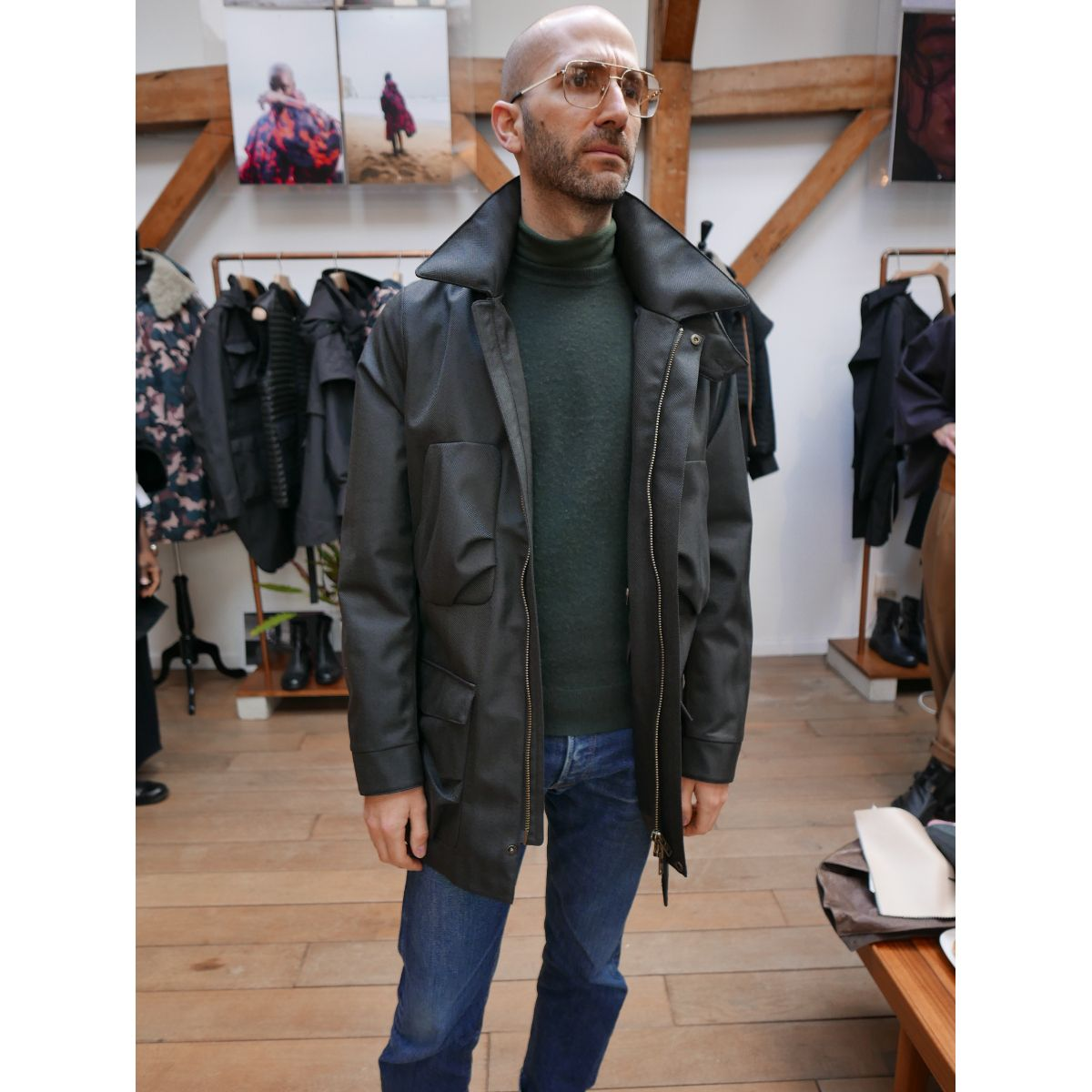 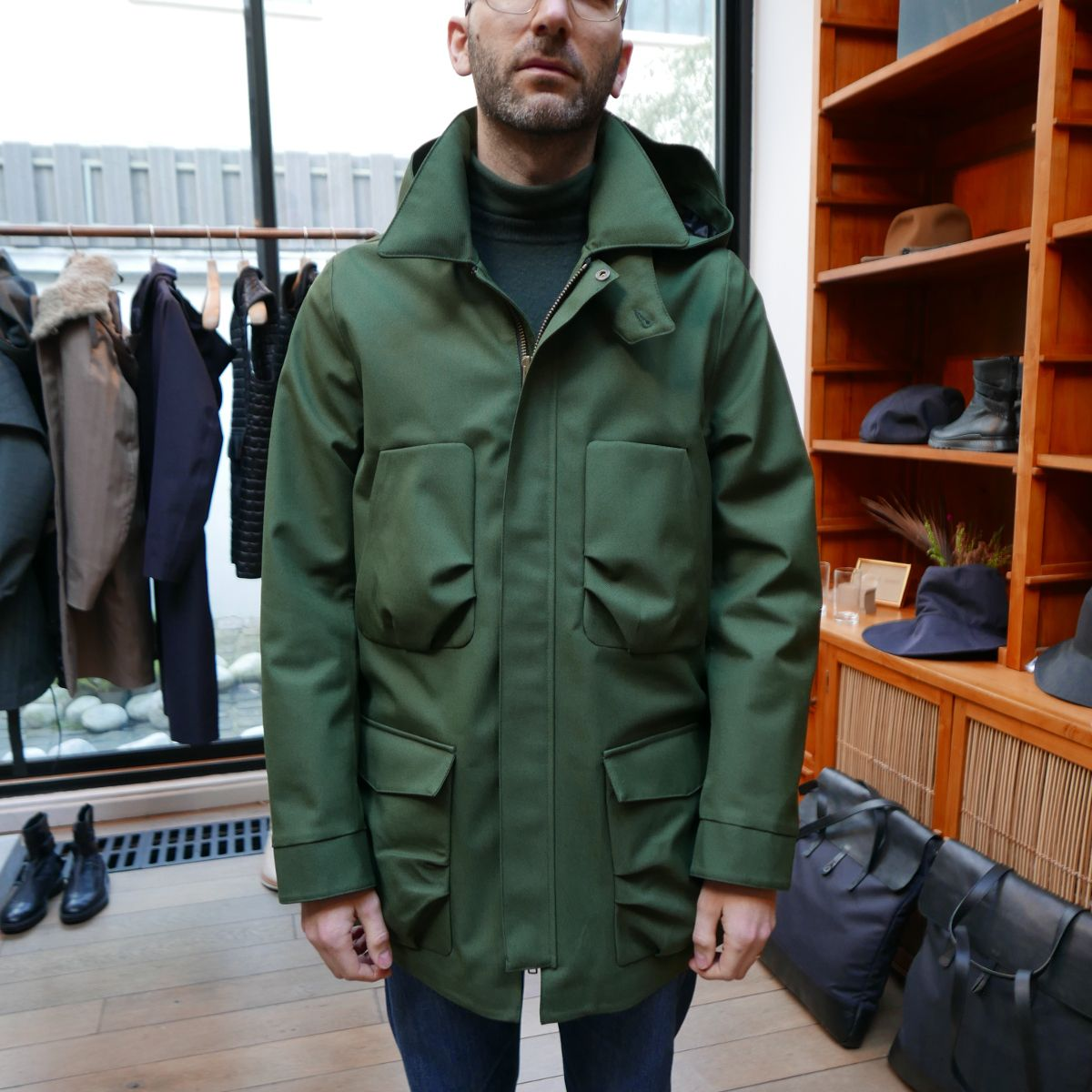 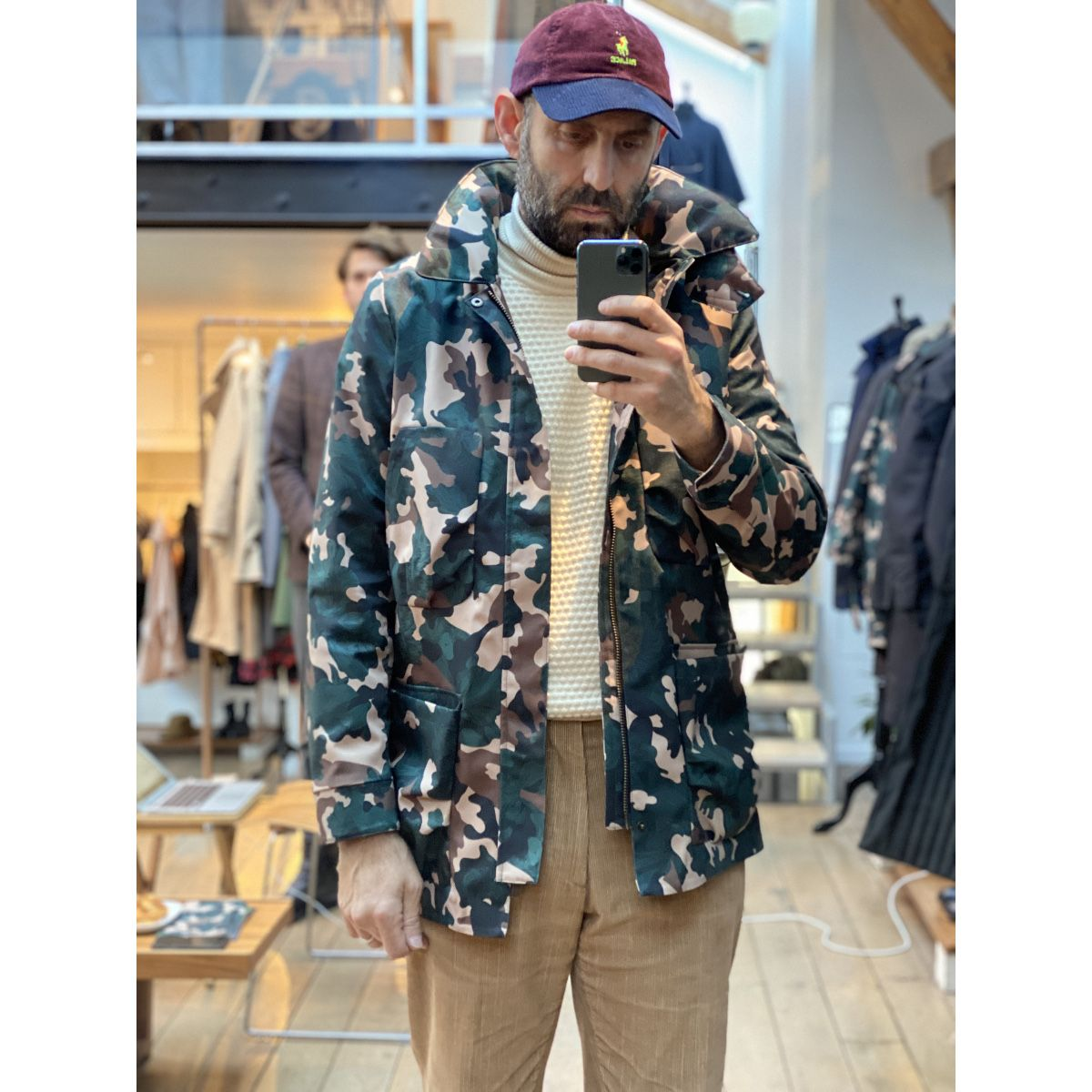 Seen here on Greg (still size M, which is a size small for him) in their new camo hopsack.


The next new style is really, really special. I'm calling it a proof of concept gone right but I think that's doing them a disservice as a lot of thought and design went into it, but the best way I can describe it is as a waterproof leather Bumfreezer. It's called the Aviator Hybrid and is made up in a specially bonded leather from their partnership with ECCO. It has a very unique, almost waxy hand to it but it lends itself really well to that Bumfreezer design, and looks perfect with the shearling collar. This one is warm like the Bumfreezer too, with the wool fiber fill lining and removable hood and everything.

When Greg told me about this one I wasn't sure what to think, but as soon as I saw it in the showroom and then tried it on I realized they had come up with something very cool even if my expression in these photos belies that. 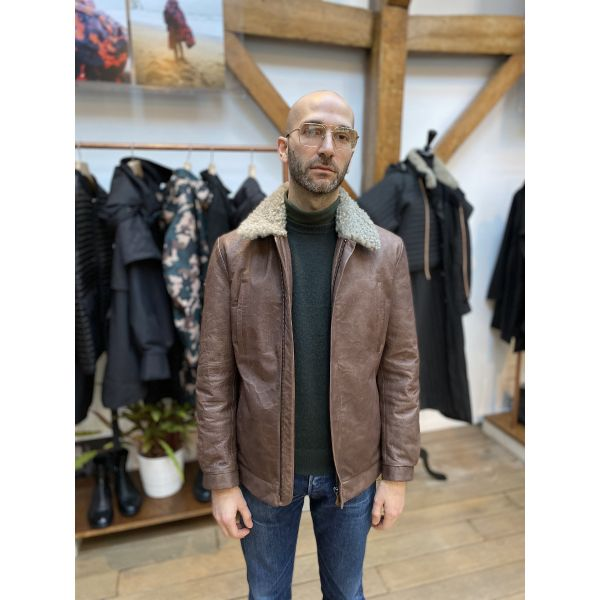 Seen here on me in a size M, which is what I wear in the Bumfreezer and what I would want in this.

It's also offered in a black version of this leather, but I don't have photos of it so we will have to use our imagination.

Now we can move onto the classics.

First off is the Moscow, the monster of a coat that has gotten me through a lot of those miserable days where the temperature is in the teens but you still have to be out and about. I think we all have a Moscow story like that, and this thread is full of pictures of them covered in snow as well. Just a great design that manages to look good with everything and keep you warm while doing it.

Sizing is true to size, and I wear a small in this one. 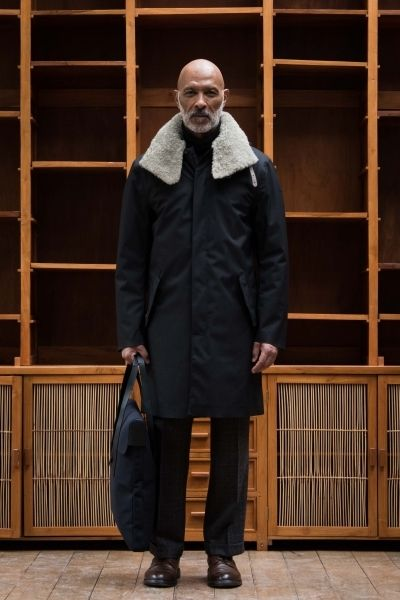 
The other winter-weight coat is the Bumfreezer, which for a few seasons now has been a No Man exclusive. Named so because it cuts off at the waist but is plenty warm above, it's a good looking coat that I think makes great use of the way Norwegian Rains fabrics don't look like technical fabrics. Made up in just about anything, it looks more like a handsome shearling trimmed bomber jacket than something that can hold up to the elements as well as it does.

Sizing is slim and small, and I recommend ordering one larger than your typical US size. 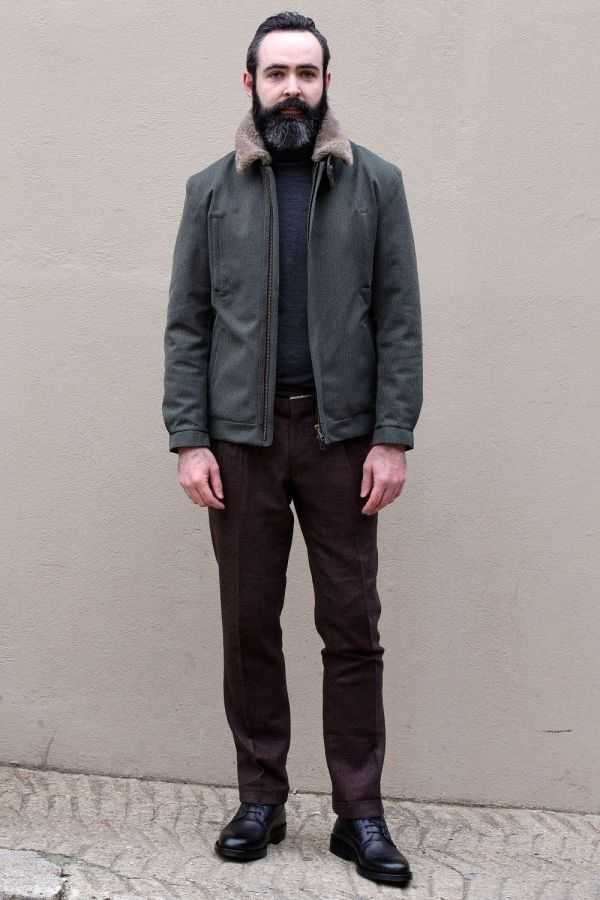 
Lastly, we have the coat that started our love for Norwegian Rain - the Single Breasted. Tailored but technical, it's a sharp coat that is incredibly well thought out from top to bottom. This looks just as good with jeans and a sweatshirt as it does over a flannel suit, and we've stocked it and restocked it every season for a reason.

This one fits slim and small, and I recommend ordering one size larger than your typical size for a regular slim fit, but it's also safe to go up two if you plan to wear it over a lot of layers or tailored clothing. Because of the design, it will still look sharp and tailored even sized up two. 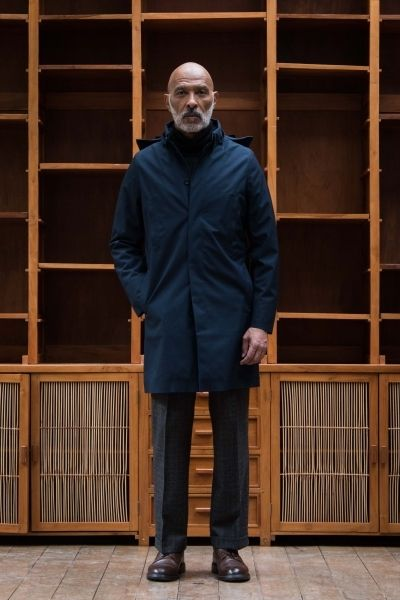 
As usual, these are pre-orders for delivery in September-October 2020, with 50% due now and 50% due upon receipt in the fall. Be sure to use code PREORDER15 for your pre-order discount!
No Man Walks Alone | Participate in the conversation : affiliate thread, MTO thread,
facebook, tumblr and instagram

Japanese rinsed (A) or washed (B) denim

<p><strong>PLEASE INDICATE THE SIZE (S, M, L, XL) YOU'RE ORDERING IN THE GIFT MESSAGE BOX ON THE CART PAGE BEFORE CHECKING OUT</strong></p> <p>50% deposit - balance due when the item is ready to ship</p> <p><span style="text-decoration: underline;">Delivery expected in Sep-Oct 2020</span></p>

The Clint jacket is back (just for NoMan again this season), and this time we convinced Valstar to offer it in black cow suede as well (a jacket we've been dreaming about and discussing the idea with @dieworkwear).

We have a fairly high minimum order requirement, so it's hard to say if either will get made - it really depends on you guys. We can only order a certain number for the rack. We will order both for the rack so there's always that added incentive of being able to exchange size if needed. That said, I think sizing for Clint is both straightforward and forgicing.

<p><strong>This is for a 50% deposit on a pre-order of Valstar peacoat; delivery expected in September-October 2020</strong></p> <p>Can be ordered in two colors of <span style="text-decoration: underline;">nappa-finish</span> sheepskin (brown or ebony) as pictured</p> <p><span...

Do you have any size charts for the Nesta Falck?