My OneBoot, by DWFII (Updated w/ Visit to DW and a second pair)

Not one boot in the Mafooian sense of something I'd like to have five pairs of, but in the sense that if I could only have one boot, as opposed to one shoe, this would be it: 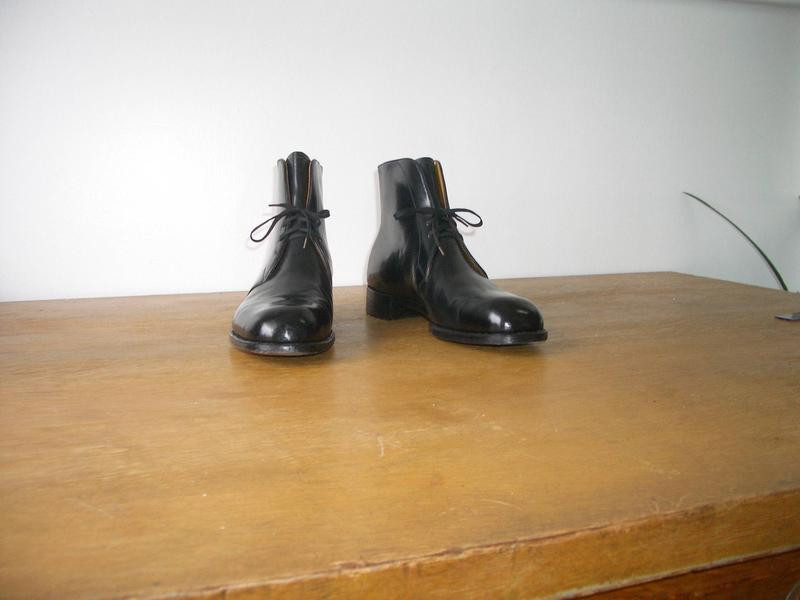 They're incredibly comfortable. My feet feel locked in so securely that I can walk briskly in them without their being laced. And when laced up, their closeness of fit and lightness make me feel like running.

I ordered them about a year ago, but in a way they've been a decade in the making, or, the "wanting," I should say. Over ten years ago, I moved from Las Vegas to Boston for grad school. I commuted by bicycle, so I got some gear appropriate to the new climate: fenders, warmer clothing, etc. The first time I had to ride several miles through a real downpour, I had waterproof stuff on from head to toe, but I still got wet and eventually sick. The problem was the three or four inches between my pants and shoes. The rain soaked my socks, which then soaked my fancy Gore-Tex shoes from the inside. At that point, their waterproof liners were a liability, trapping water in my socks and on my feet the whole day long.

Instead of giving up on bicycle commuting, I would bring a change of shoes and socks on rainy days. Eventually I bought boots: hiking boots and cowboy boots. Neither was really appropriate urban wear, but they were fine for grad school. For a few years, I thought long and hard about what type of dress boots I would get: chelseas, balmoral boots, chukkas, or blucher boots. Each had its advantages, but I thought balmoral and blucher boots would take a little too much time to get on, and that chelseas wouldn't offer very good protection of my ankle bones in a fall (particularly dangerous on a motorcycle, which I rode when I was too lazy to bike).

So when I graduated and got a real job, I celebrated w/ a pair Ron Rider's shell chukkas. For the past few years, they've been my my favorite footwear in the rain. However, they're just a little too short for keeping all the rain off my ankles. Bengalstripe tipped me off to another type of boot that was taller than a chukka but didn't have as many lace holes as a balmoral or blucher boot--the george boot. It seemed perfect--tall enough to protect my ankles from rain and a fall but still easy on/off. There was one catch: no one seemed to make it in a high quality leather. I didn't want to spend $2-300 on corrected grain.

So when DWFII posted a pair he had made, I began to consider commissioning a bespoke pair. At first, I thought they would be out of my price range. And they were. But after meeting DW in person, examining samples of his work, and spending over two hours talking with him and his lovely, knowledgeable wife, I was sold. Here are the results: In dust bags that reflect DW's Scottish heritage: 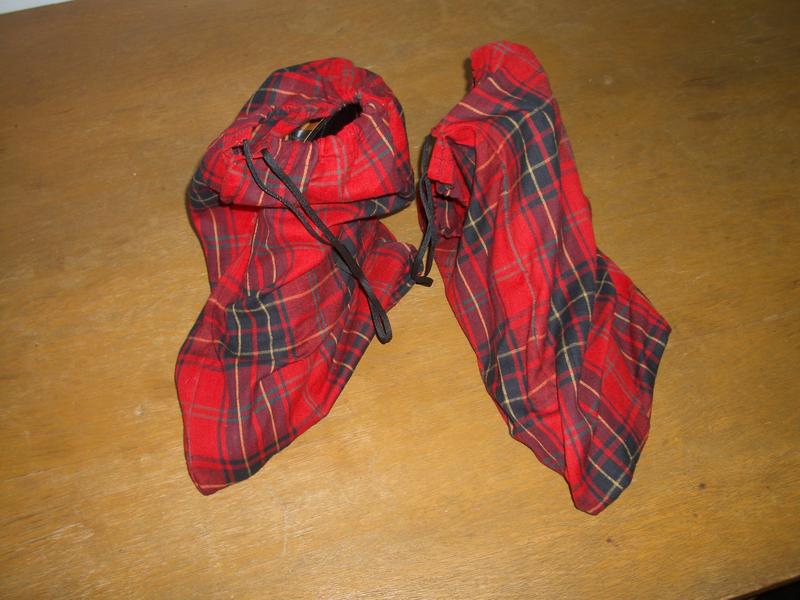 Fresh out of the bags: 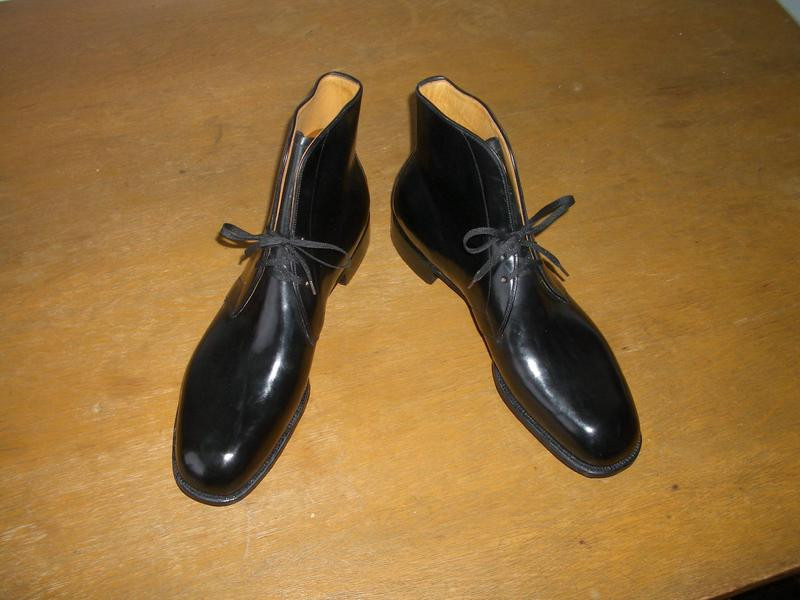 After a few wearings (same as above):

After a few week's wearings: 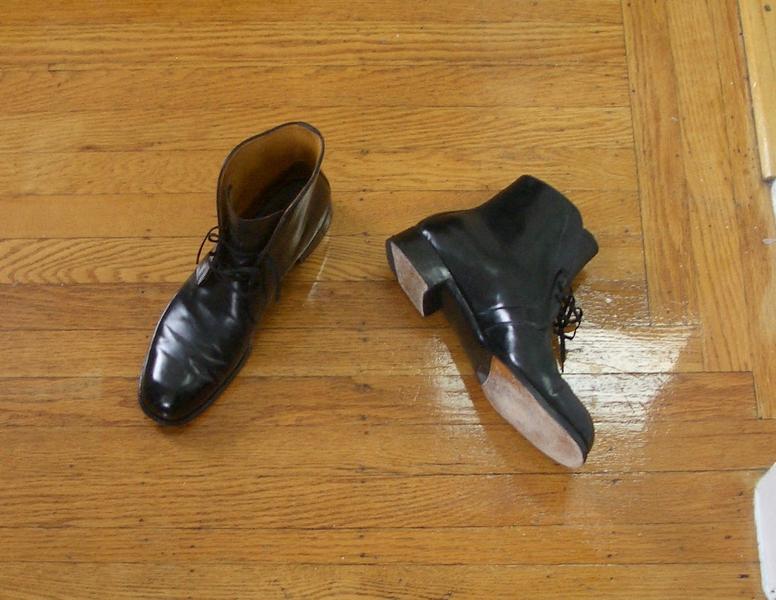 Vintage trees DW selected and, I believe, shaped to fit my last: 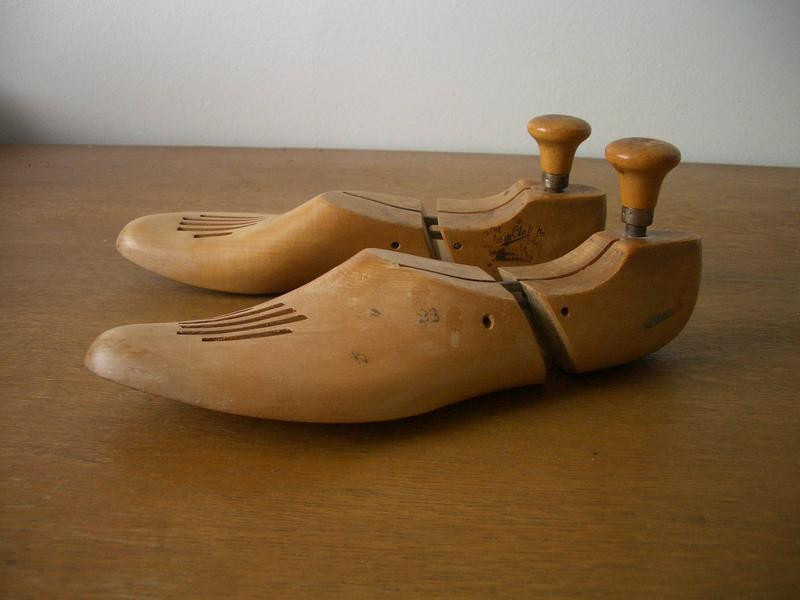 Two views with Rider RBCB1's and the Alfred Sargent Miller's, side: 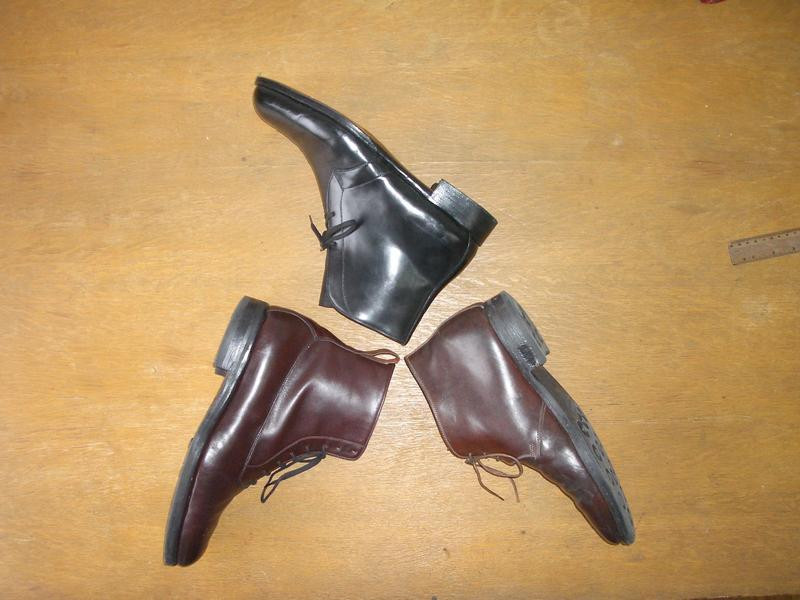 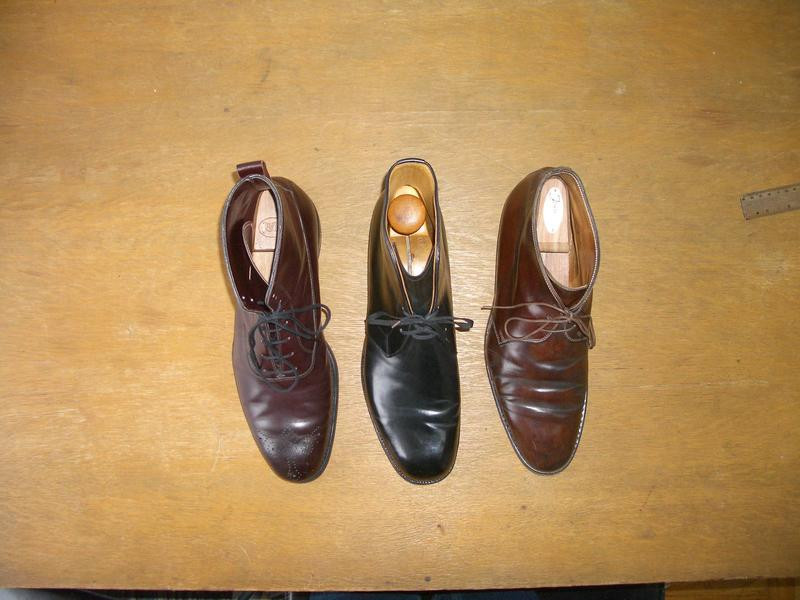 The side views show just how high they are. A perfect height for keeping out the rain and wind on the bike. On the feet, under a simple pair of Levi's 501s: 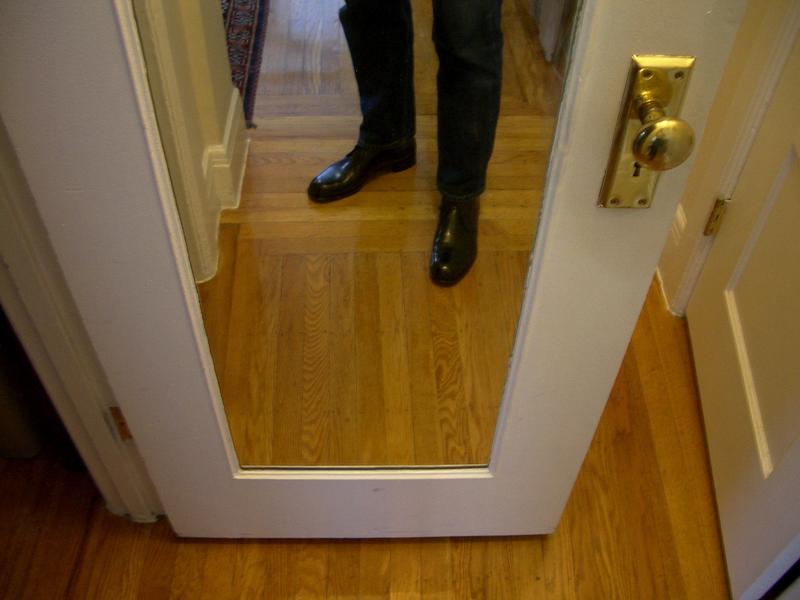 Thank you DW!
Last edited: Sep 26, 2013
Just as unrestricted questioning is our capacity for self-transcendence, so being in love in an unrestricted fashion is the proper fulfillment of that capacity. – Bernard Lonergan, S.J.

Nice looking boots, emptym! I hope you get lots of wear out of them.

Thanks dah328! Oops, forgot to post a pic of the soles: 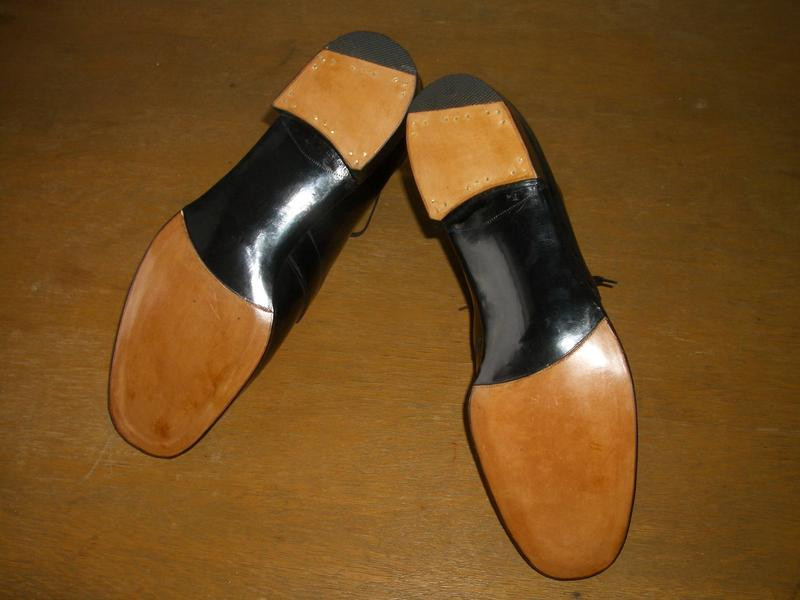 Of course, after a few weeks of hard wear, much of that in the crazy rain we've been having, they're not quite as mirror polished. But they're holding up well. That Baker's sole leather is tough stuff.
Just as unrestricted questioning is our capacity for self-transcendence, so being in love in an unrestricted fashion is the proper fulfillment of that capacity. – Bernard Lonergan, S.J.

emptym asked me to take some photos during the construction of this shoe. And I did. But I am poor photographer and not all of them turned out. Of those that did, some of them are unusual in that they aren't what you usually see being photographed...especially the first set.

Thank you for the kind words.

That photo above sure makes the bottom of the right boot look cock-eyed. I hope I wouldn't have let it go out the door looking like that. I suspect it is just a perspective issue.

The trees are vintage--oldies but goodies--but they don't make them like that any more. Unless the maker has access to a lastmaker who will turn or carve lasted trees a customer is stuck with pretty shoddy facsimiles.


Without "good" there is no "better," without "better," no "best."
And without the recognition that there is a hierarchy of excellence in all things, nothing rises above the level of mundane.​
Tight Stitches
DWFII--Member
Instagram

Are you using anything special to care for them?
"And this concrete man, this man of flesh and bone, is at once the subject and the supreme object of all philosophy, whether certain self-styled philosophers like it or not." -- Miguel de Unamuno, Tragic Sense of Life

^Thanks Trompe le Monde and YS. J, DW included a bottle of Venetian Shoe Cream, which I believe Horween recommends. But I have yet to try it. So far, I've just brushed them a bit after every wear or three.

...That photo above sure makes the bottom of the right boot look cock-eyed. I hope I wouldn't have let it go out the door looking like that. I suspect it is just a perceptive issue...
Hmm. I'm not sure what you mean. They look great to me, but as was true throughout the process, you have higher standards than I do. I look forward to seeing the pics!
Just as unrestricted questioning is our capacity for self-transcendence, so being in love in an unrestricted fashion is the proper fulfillment of that capacity. – Bernard Lonergan, S.J.

nice post nad great write up thanks!
If think you are a person of some influence, try ordering somebody else's dog around!

Quote:
Originally Posted by gorgekko
Man, my reality doesn't even include you so why kvetch about it?

DWF,
Those boots are truly beautiful. That's a style I have long admired, and I have never seen them done better.

Those are amazing M! Wear them in good health! Did you intentionally opt out of the channeled sole?

You made me want to ask DW to make me one pair!

you have higher standards than I do.

I'm glad they turned out well for you emptym. DWF's work always manages to look both solid and elegant at the same time.