Always fun to submit new ideas to the style forum for opinions and ridicule. Today's is very, very special.

We're auctioning off ONLY ONE PAIR of these majestic pants, as they're the burial trousers of ancient Egypt's libertine pharaoh, King Smut -- the inventor of pornoglyphics.

Bidding started yesterday, and it's now at $355. Auction ends tomorrow at noon Pacific. 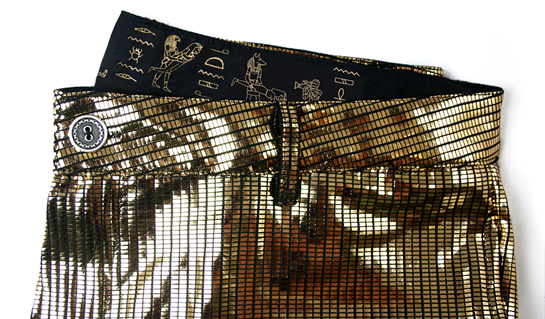 Here's the story (and more pics.)

Earlier this year, a team of Betabrand fashion archaeologists made a stunning discovery in Egypt's famous Valley of the Kings. While digging for the remains of Mummytown, they stumbled across the lost tomb of the libertine pharaoh Smutankhamun, better known as King Smut.


Historians agree that Smutankhamun --renowned for his otherworldly virility and credited with the invention of pornoglyphics -- was the Hefner of his time, the most envied man in the ancient world. Under his lusty rule, the kingdom of Egypt enjoyed a lengthy period of hot, nearly non-stop action. Even mummies went unclothed. 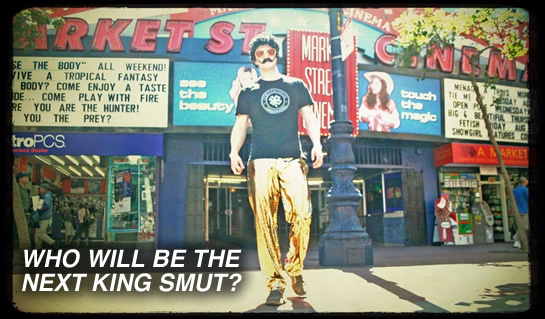 Not only did our team unearth the sarcophagus of this legendary lecher, they also found his fabled golden trousers, known to possess libidinal forces more powerful than the mighty Nile.


Museums around the world have offered us vast sums of money for these 3,000-year-old pants. But we've decided to auction them off to the highest bidder. The winner receives not only a pair of pharaohcious party pants but also perhaps the most envied trousers of all time! Betabrand devotees will see the remarkable similarities between these golden slacks and our own spectacular Disco Pants, the light-dispersing trousers that are now standard equipment for legions of bachelor party and Burning Man enthusiasts.

In addition, pornoglyphics on the pockets and belt liner reveal a wealth of information about the pharaoh and his pants. Here's a sampling:


2. The pants are said to contain the ancient world's most powerful aphrodisiac, born of the pharaoh's own preternatural musk as well as the remains of 300 spectacularly endowed stallions with whom he was buried.


3. None of the Smutankhamun's favorite eunuchs were allowed within 10 cubits of his pants, lest they regain their virility on the spot.


5. According to legend, his pants were forged in the furnace of Osiris with gold smelted by Ra, and both were naked at the time.


6. The owner of these pants will learn the answer to the riddle of the Sphinx. (Hint: It's unbelievably lewd.)

7. Smutankhamun's tomb was discovered beneath a pair of perky and well-proportioned pyramids.


If you've read this far, wow, I'm amazed. Now reward yourself by checking out the auction.

Do a search for threads started by Vanity, and you shall receive enlightenment.
Quote:
Originally Posted by Connemara

Thanks for ruining this forum you piece of shit.

Glad you like. This is the second of our seven-part tribute to the Deadly sins. The first pair, Gluttony pants, were a big hit. Here's a look at those.

I think we'll do Wrath next. That or lust.

Looks like the auction's reached the magic $400 number. I wonder what will happen when the folks in Monte Carlo and Dubai discover them?
S

Market St. Cinema... my friends got BJs there once after a bachelor party.

holy crap, these are amazing! how did someone not think up pornoglyphics earlier?? simply genuis.

their website is fantastic too- love the bike to work pants and smoking jackets. really creative, funny, and useful products. great to see that kind of blend of design and function.

I must say, I think the hieroglyphics in the pockets and waistband are actually pretty cool. The fabric could be cool, in an 'FU' kinda way, except that the way it drapes and the fit of the trousers kinda makes them look like harem pants...which is not good...

I'm more of a fan of their jeans - raw denim for under $100 seems like a good deal. They're more my style than gold disco pants, but hey, to each their own...the mummy filming is a hilarious detail tho... 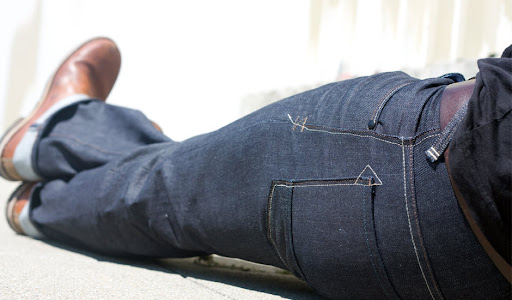 We've got the graphics, so we could make plenty of products with pornoglyphics. Though it's kinda fun to just make one. Bidding has now reached $430. See for yourself: