It occurred to me that people might want an update on my latest business misadventure. Here is a little background on my menswear brand - Ikiré Jones (http://www.ikirejones.com). 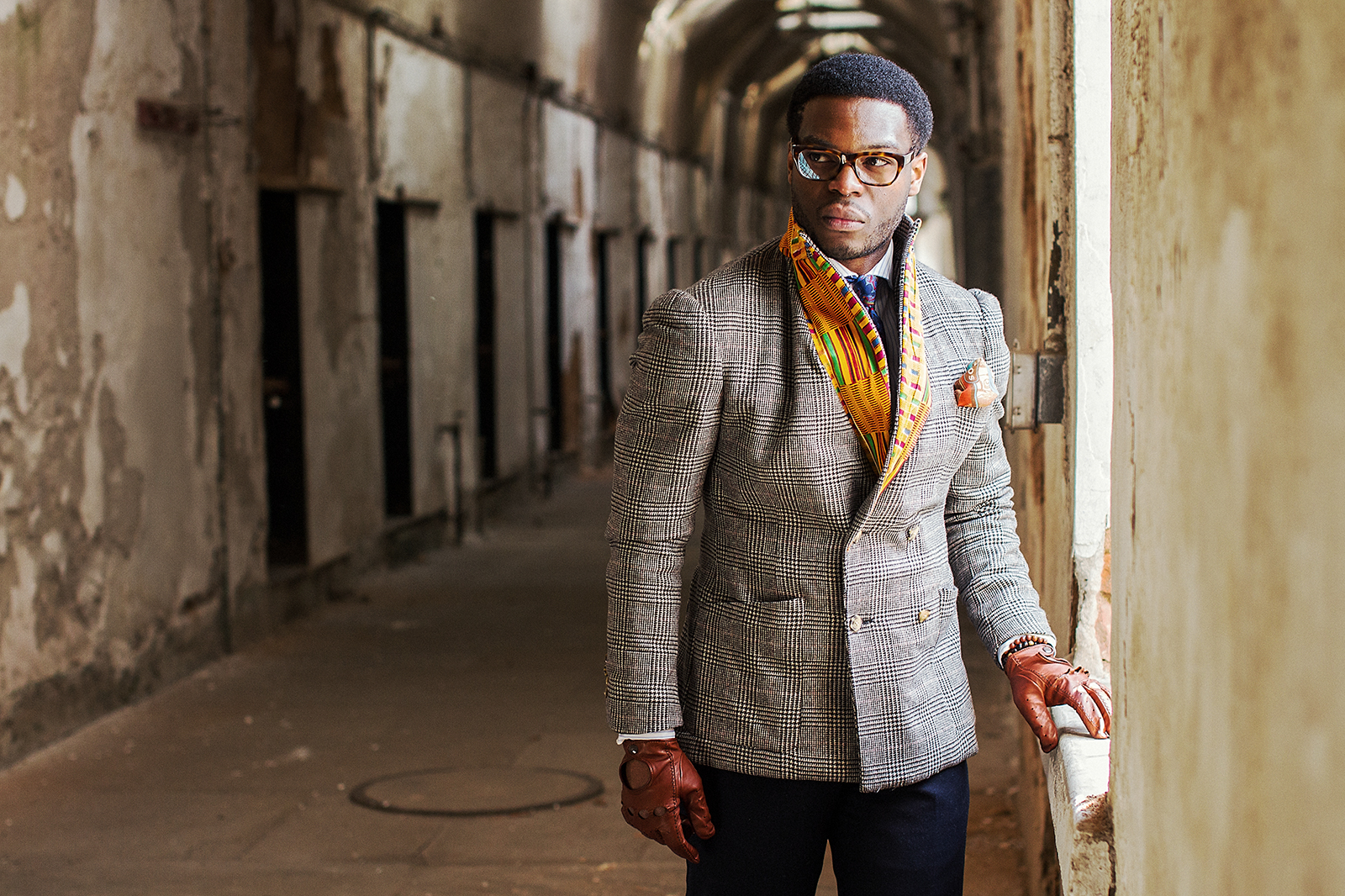 ​
With Ikiré Jones, I’ve married Neapolitan tailoring and African aesthetics. All of the pieces are made using English and Italian tailoring methods, but the inspiration is West Africa. It’s a melting-pot that reflects my personal history.

Until recently, I worked as an attorney in a big law firm. This is the story of how I found myself at the helm of a menswear line. When I was younger, I didn’t have a clothing obsession or a desire to become the next Ralph Lauren. My development as a designer was a result of circumstance and opportunity.

In my mid-20s, I was an indie musician employed part-time at Banana Republic as a stock associate. At the time, I did not see this as an opportunity to work my way up the ladder in the glorious world of retail. In fact, I cared very little about clothes, and paid little attention to any garments that weren't on my own back or imprisoned in my desolate dungeon of a closet.
All of this began when my girlfriend made an off-hand comment:

“Your roommate dresses better than you.” Any man who has ever been appraised by his woman and found himself lacking knows what an irrevocable bruise this can leave on the male ego. At that moment I swore, like so many evil villains, megalomaniacs and dictators had before me, that my pride would never be so hurt again. I threw myself into the pages of GQ and Esquire with the fervor of a young Daniel Larusso. 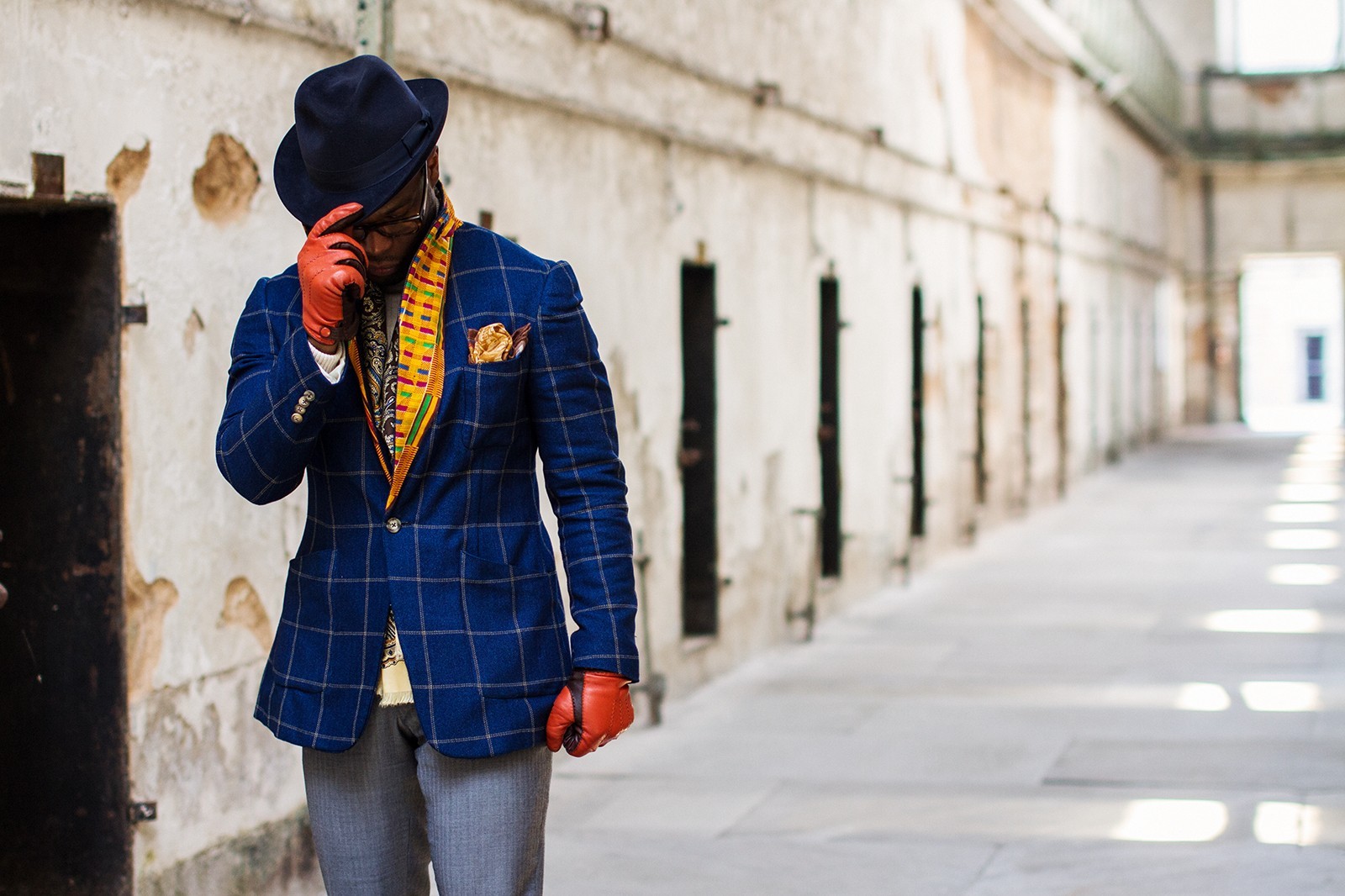 Later, I stumbled upon a picture of a guy I would come to know as "Phat Guido." This led me to Style Forum. When in the company of addicts, you’ll hear them speak with longing, regret and photographic clarity about their first hit of a drug. This is how I recall my first days at SF.

Around that time, Foo appeared on tv as one of Esquire Magazine's "Best Dressed Real Men." Following his lead, I entered the contest the next year and ended up in the Top 5 as well. I then started a menswear blog (lessgentlemen.com) because I wanted to use clothing as a vehicle to discuss the travails of the 30-something creative who is comfortable, but unsettled with his place in life.

I began to garner a measure of online notoriety because of the pictures on LessGentleMen (note: being “famous on the internet” is not something you should ever brag about it real life. It doesn’t go over as well as one might think). People would stop me in the street and ask where I bought such and such, or what tailor I used. I quickly realized that I was becoming a walking billboard for brands that I had no personal connection to. At the same time, my professional life was veering on a trajectory that I wasn’t happy with. I knew something had to change. It seemed like the perfect time to try something new.

Fortunately, Styleforum is a hotbed of individuals who have created their own space in the menswear industry. I made a pilgrimage to Hong Kong to visit "The Armoury.” I also spoke with other SF-related brands like Vanda and Panta. Ultimately, I decided that if I was going to jump into the pool, it had to be as an individual, not as just another brand whose identity differs from the pack in name only. It occurred to me that I could combine my love for Italian tailoring and English accessories with my West-African heritage. Ikiré Jones was born. 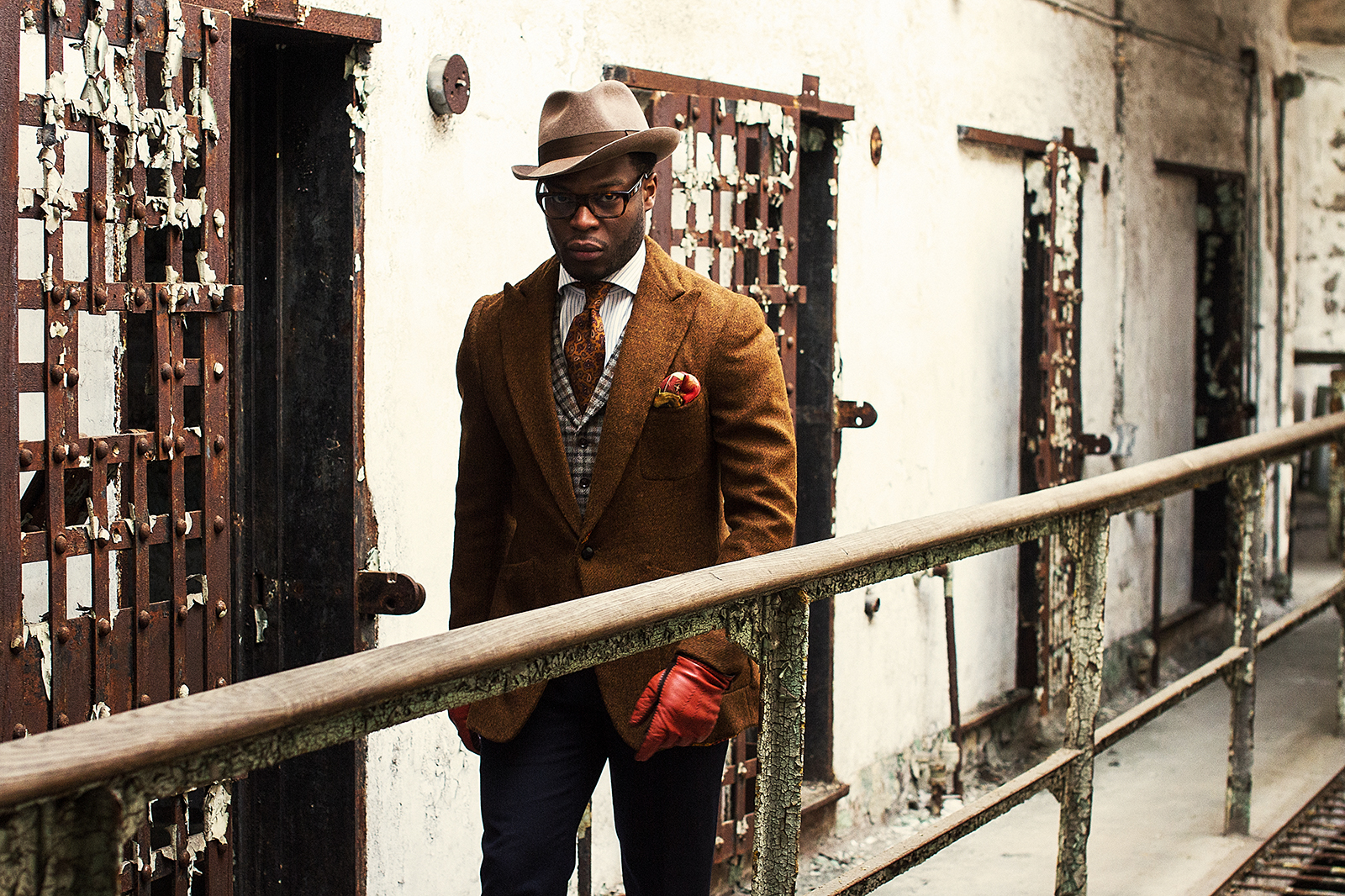 As an American immigrant, I knew I would run into a fair amount of resistance from some members of my family when I proposed my new venture to them. Oftentimes, people who come from different parts of the world have to struggle to get here. They tend to have very clear ideas about what success in American means. On the other hand, I've found that younger generation immigrants quickly become seduced by the American dream; and the many different forms it can come in. I realized that this is a country where I don’t necessarily have to be a doctor, lawyer or engineer to make something of myself. None of us knows how the story will end for us, but we all have to have the guts to swing for the fences. Ikiré Jones is just my way of stepping in front of the pitcher.

Regarding the garments themselves. The Ikiré Jones jacket is fully canvassed and made in Brooklyn, New York. Visually, it is reminiscent of Naples, in that it is unstructured and uses a soft shoulder with minimal padding. The shoulders are aggressively roped and the lapel points are high. It’s a distinctive look intended to stand out from the horde of similar coat patterns one might find on the rack. All of the jackets are lined with West African wax-printed cotton. The underside of the lapels, and back collar of the jackets are similarly lined. Although the African prints are not visible at a glance, if the wearer is feeling rakish and decides to turn his collar/lapels up, the colorful African prints will be on display. You could easily wear any of these jackets in a conservative setting, and no one would be aware of the jacket's African touches.

The pocket squares are similarly mixed in origin. Although they are printed and made in Macclesfield, England, a region well storied for its fine garments, they are designed in the USA by African and African-American artists who are well acquainted with West African aesthetics. As a fan of the pocket squares and scarves made by brands like Hermes, Rubinacci and Drake's of London, I am very proud of the Ikiré Jones squares and believe that they are every bit as beautiful, if not more so. We will be introducing additional pocket square designs and larger print scarves this coming Fall (2013). 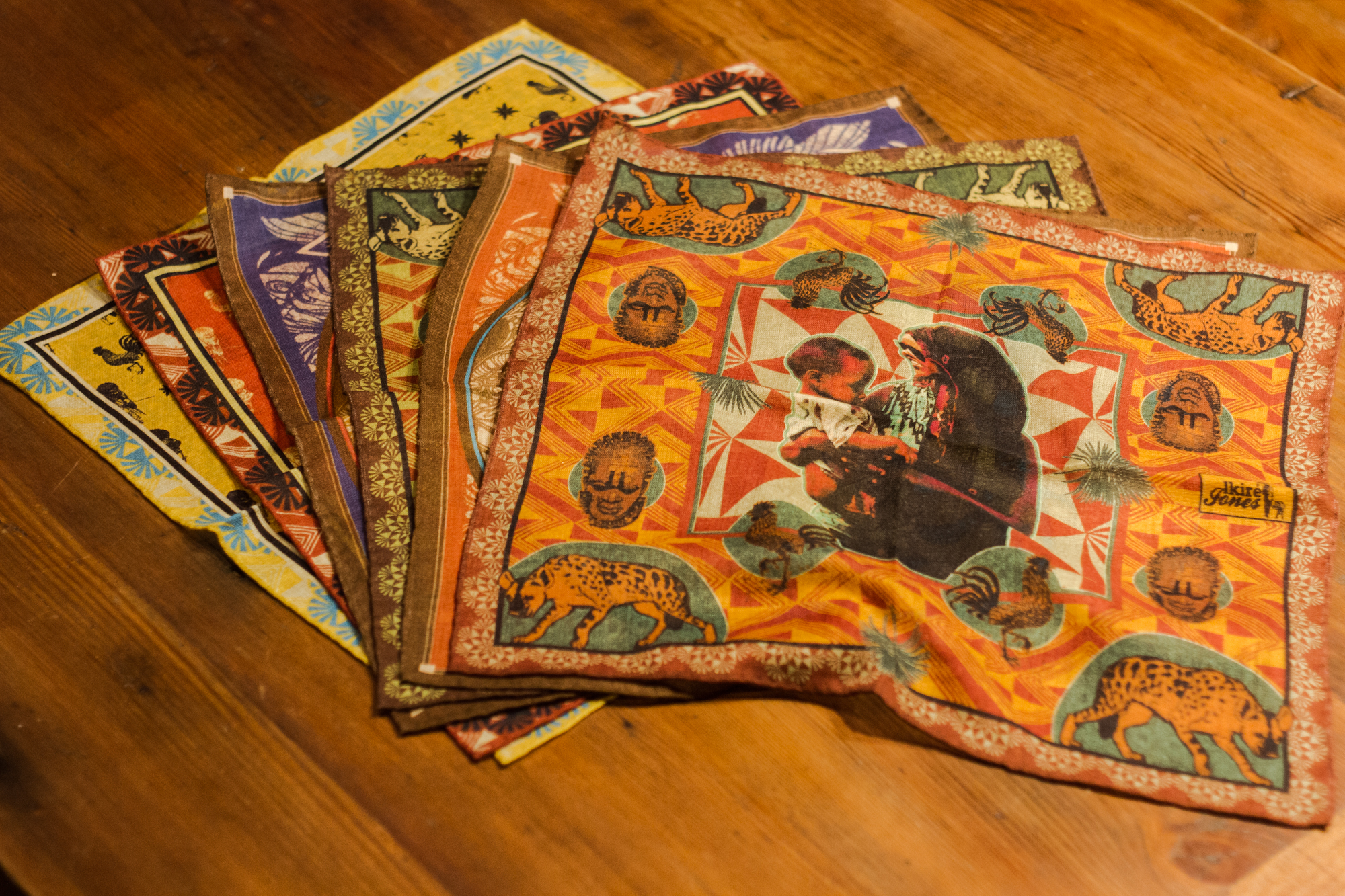 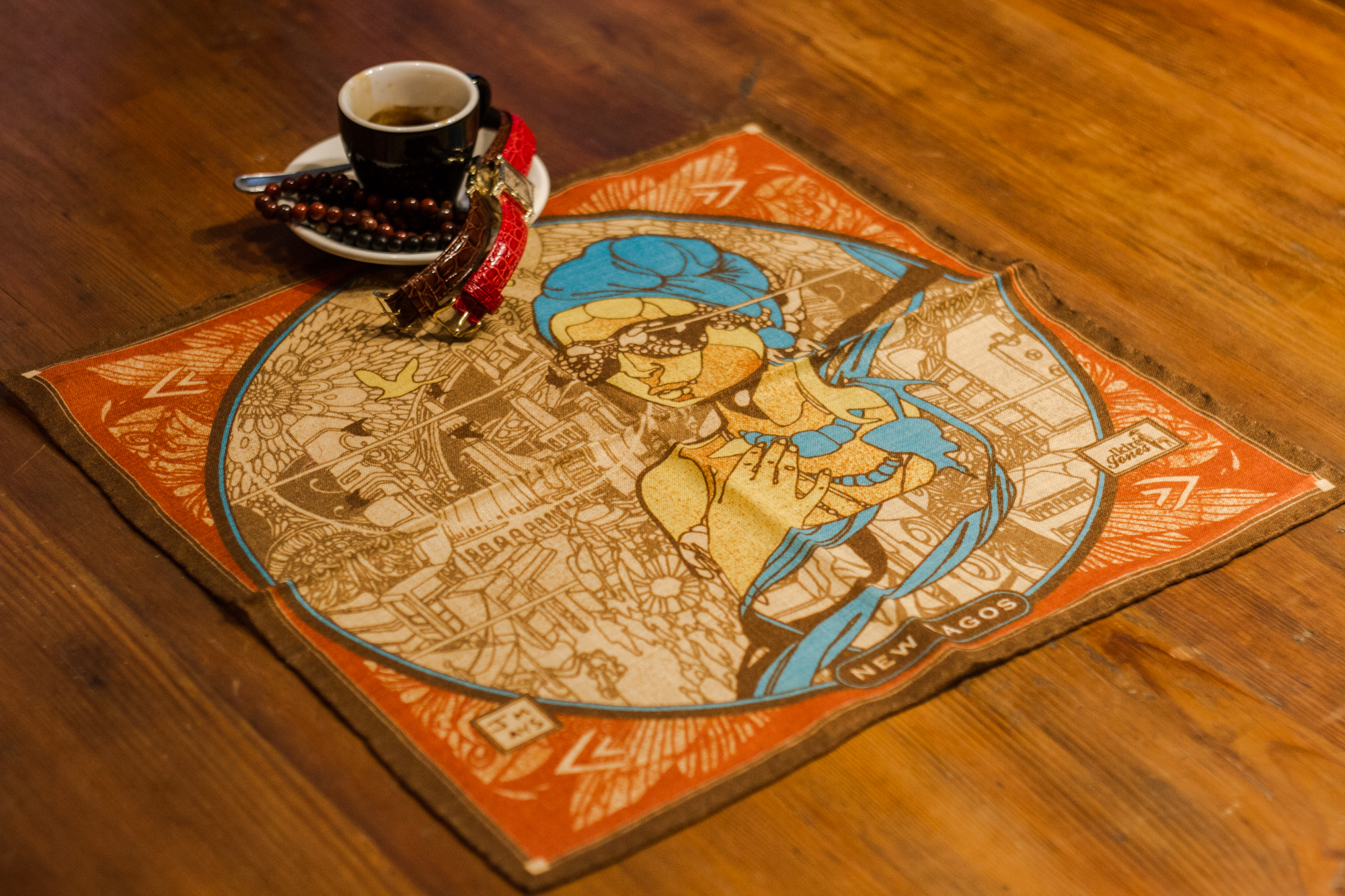 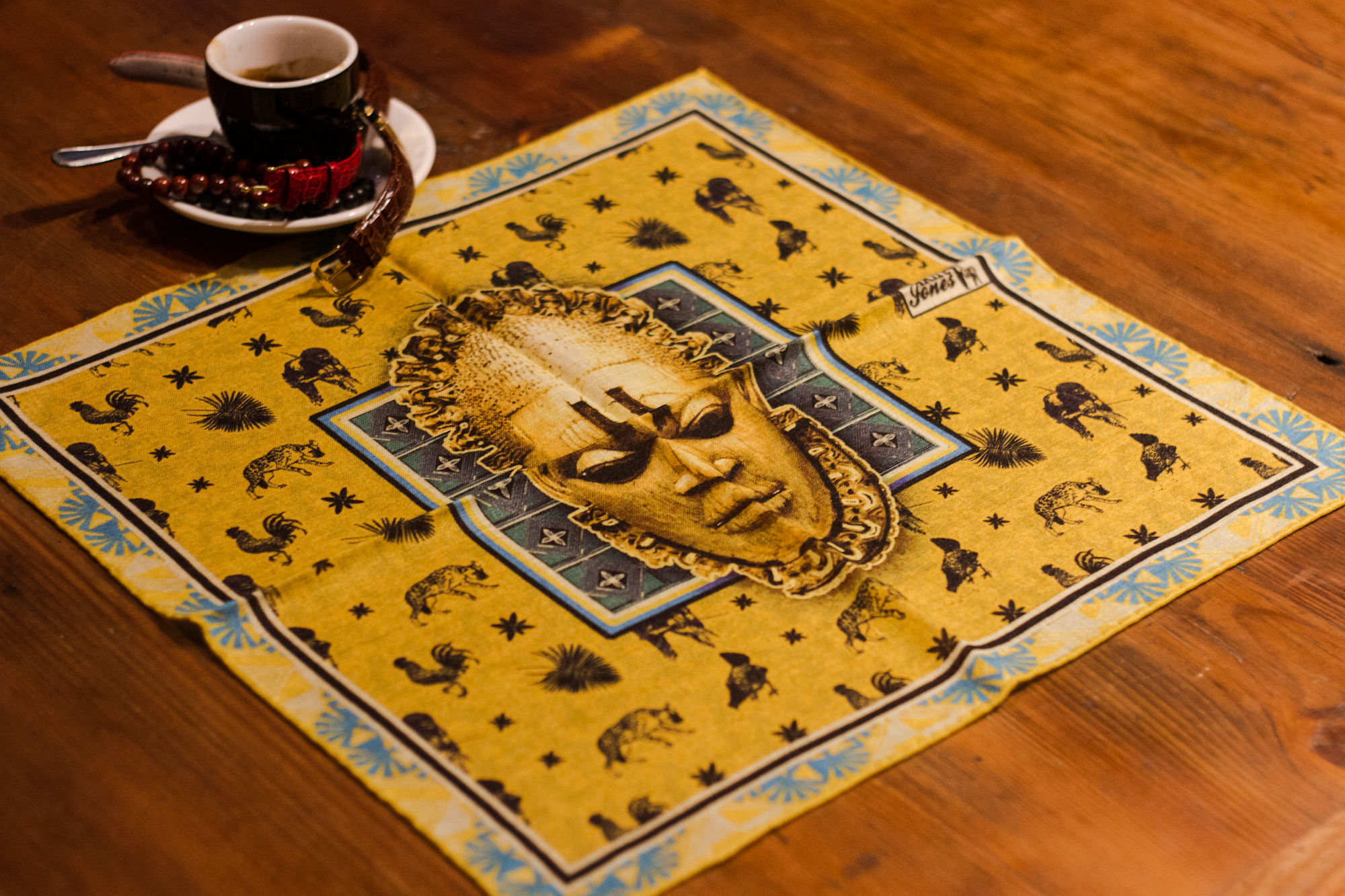 ​
As an aside, if anyone is aware of any boutiques (US, UK, Japan, Wherever) that may be interested in stocking our squares, I would love to speak with them.
Last edited: Apr 10, 2013
Introducing my menswear brand: Ikiré Jones.​
A

BTW, your website is very cool. Keep it up and wish you all the best.
Last edited: Apr 10, 2013
My Blog: http://www.tumblr.com/blog/hlckwok1 Please do not contact me for 1)Price Quotas 2) Budget suggestions 3) Cogent examples/reviews of Bespoke Products not made by me and 4) Researching guidelines. I only welcome genuine tailoring/style discussion.

Best of luck, Wale.
“I have always lived violently, drunk hugely, eaten too much or not at all, slept around the clock or missed two nights of sleeping, worked too hard and too long in glory, or slobbed for a time in utter laziness. I’ve lifted, pulled, chopped, climbed, made love with joy and taken my hangovers as a consequence, not as a punishment.”

I didn't know Foo was on tv as best dressed real man...
Click to expand...

He was in the top 3 on some morning news program. He lost to dan treppanier if i remember correctly

Do you have any photos of your jackets on other people?

Many people just start with accessories, but to start with tailored clothing as well is a bold move.

One thought: next photo shoot, get some pro photo models as well.

You have a very distinctively powerful build, so I have no idea how the coats fit on a person of any other size.

And if you are in fact the fit model, than god help the rest of us.

Lots of digital ink has been spilled about the clothing revolution taking hold among young Asian sartorialists (see: Vanda/Drakes/The Armoury) but with Marshall Anthony and now Ikire Jones there is a new success story; namely, that of young African American sartorialists.

Good luck Wale, and a great story too. As are all the short whimsical vignettes for each item on your site; very entertaining and attention-grabbing.

I appreciate that it's a bit of a pain, but would you ship a square to the UK? The New Lagos, puffed appropriately, has some very versatile colours I think.

Superfluous said:
Do you have any photos of your jackets on other people?
Click to expand...

Not yet, my ego got in the way a bit when creating the lookbook. But i'll work on using a few more body-types.

Lots of digital ink has been spilled about the clothing revolution taking hold among young Asian sartorialists (see: Vanda/Drakes/The Armoury) but with Marshall Anthony and now Ikire Jones there is a new success story; namely, that of young African American sartorialists.

Just let me know when the PS's become available so I can pull the trigger. Good luck!
Click to expand...

Squares are available for sale now!


Holdfast said:
Good luck Wale, and a great story too. As are all the short whimsical vignettes for each item on your site; very entertaining and attention-grabbing.

I appreciate that it's a bit of a pain, but would you ship a square to the UK? The New Lagos, puffed appropriately, has some very versatile colours I think.
Click to expand...

Thanks All. And yes, I will absolutely ship to the UK.

I do like the squares, and look forward to scarves in similar designs / patterns.