How formal is an outfit?

After the hubub over this fit I thought it might be worth having a discussion about what exactly determines the formality of an outfit.

I've not read that full thread but that can hardly be classified as formal - merely dreadful - trouser length and shoes for starters.


Formal I suppose is built around a perception, charcoal grey suit, white short etc. I don't believe such a suit need always be deemed formal - worn with an open necked cheque shirt and perhaps brown shoes, that formality starts to drain away.

I would rather tend to think formality is built on perception of garments and some can take either path along with their accessories, Even denims worn with a coloured or Tattersall cheque shirt and maybe a tie command a degree of formality compared with the same denims worn with a t and flip flops.

GBR said:
I've not read that full thread but that can hardly be classified as formal - merely dreadful - trouser length and shoes for starters.
Click to expand...

Canta, you are slipping (or is it I?). I thought this was the post you were referring to:


southernstyle said:
A few photos from this past weekend in New York for my stepsisters wedding: 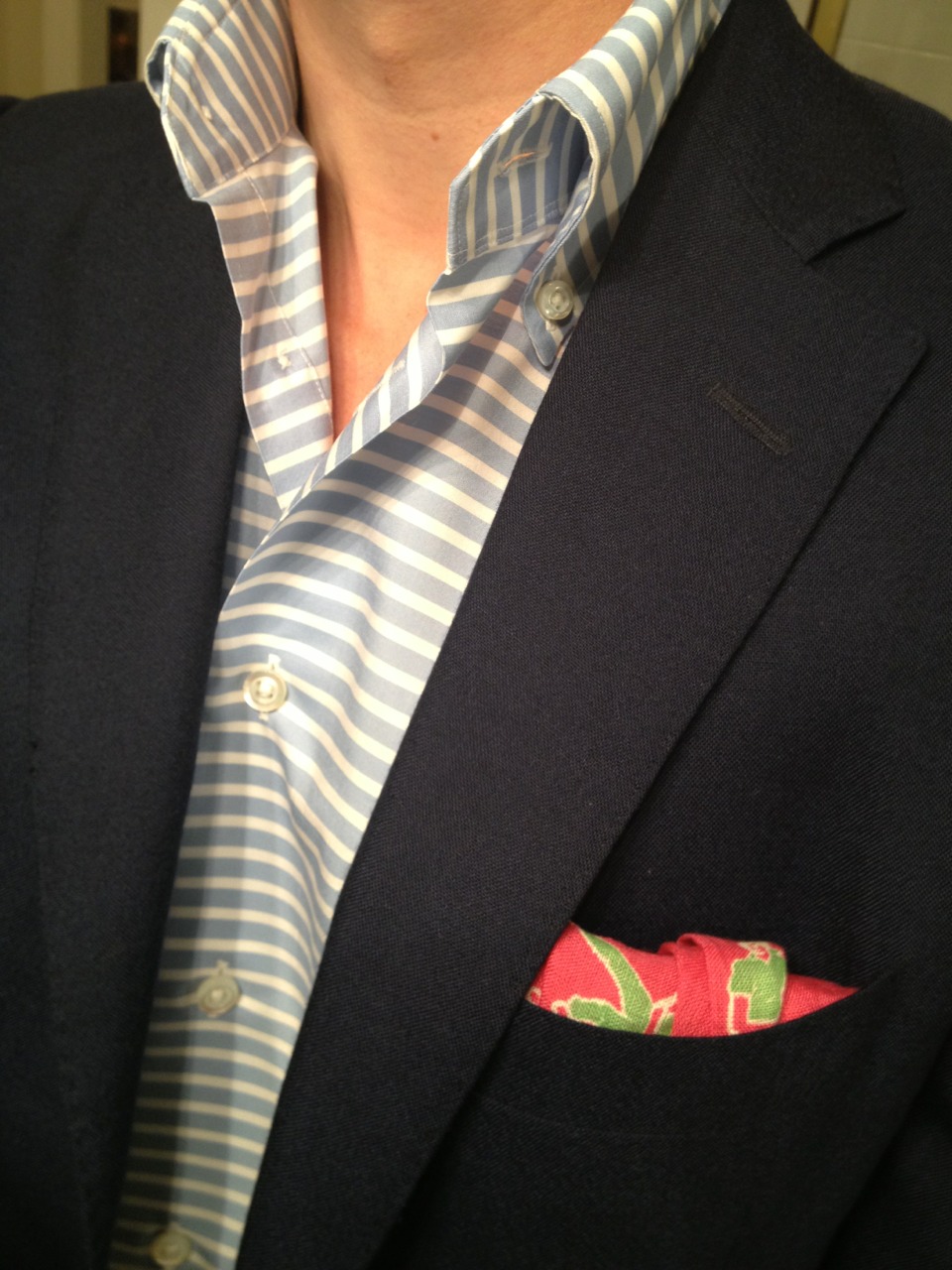 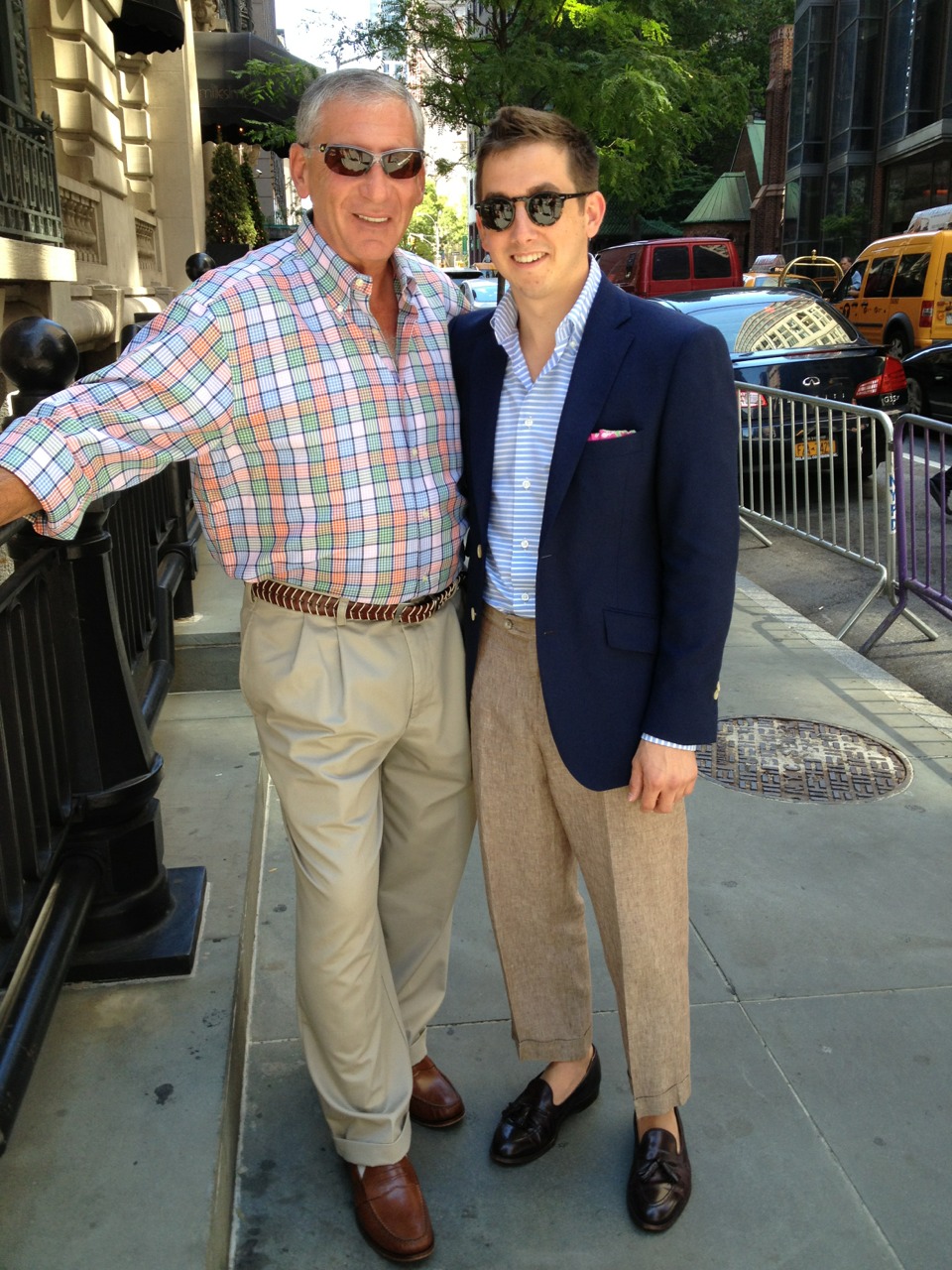 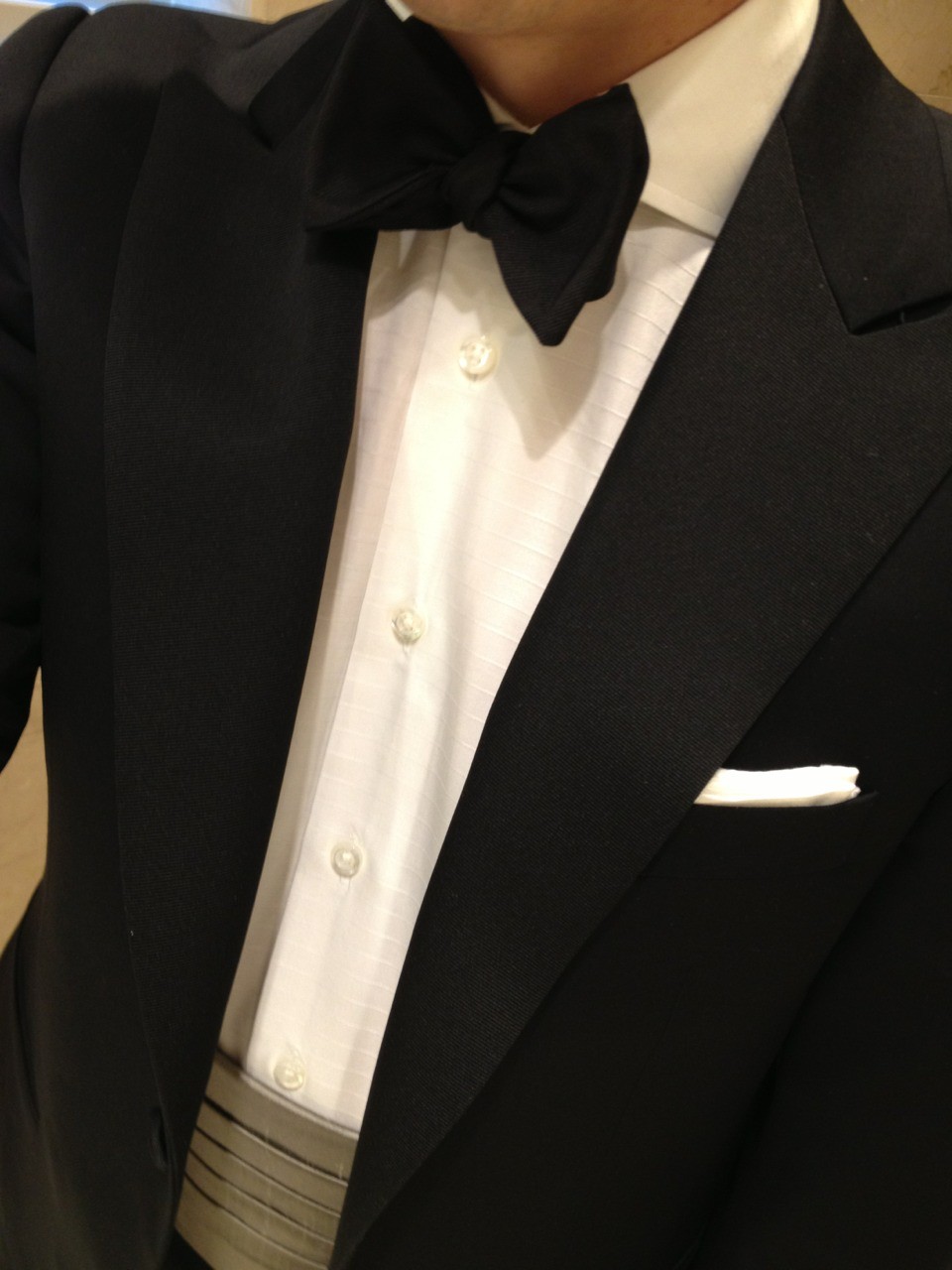 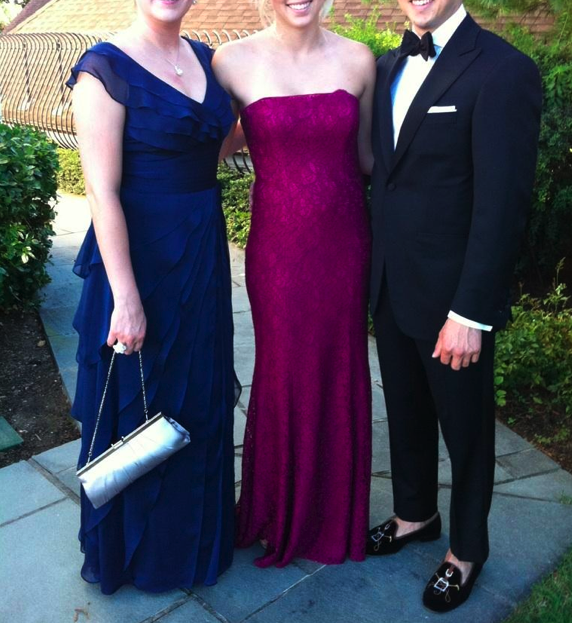 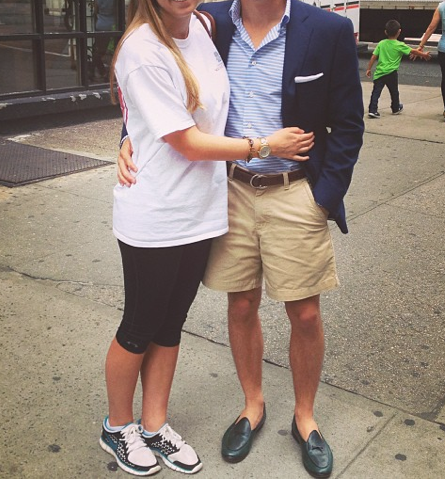 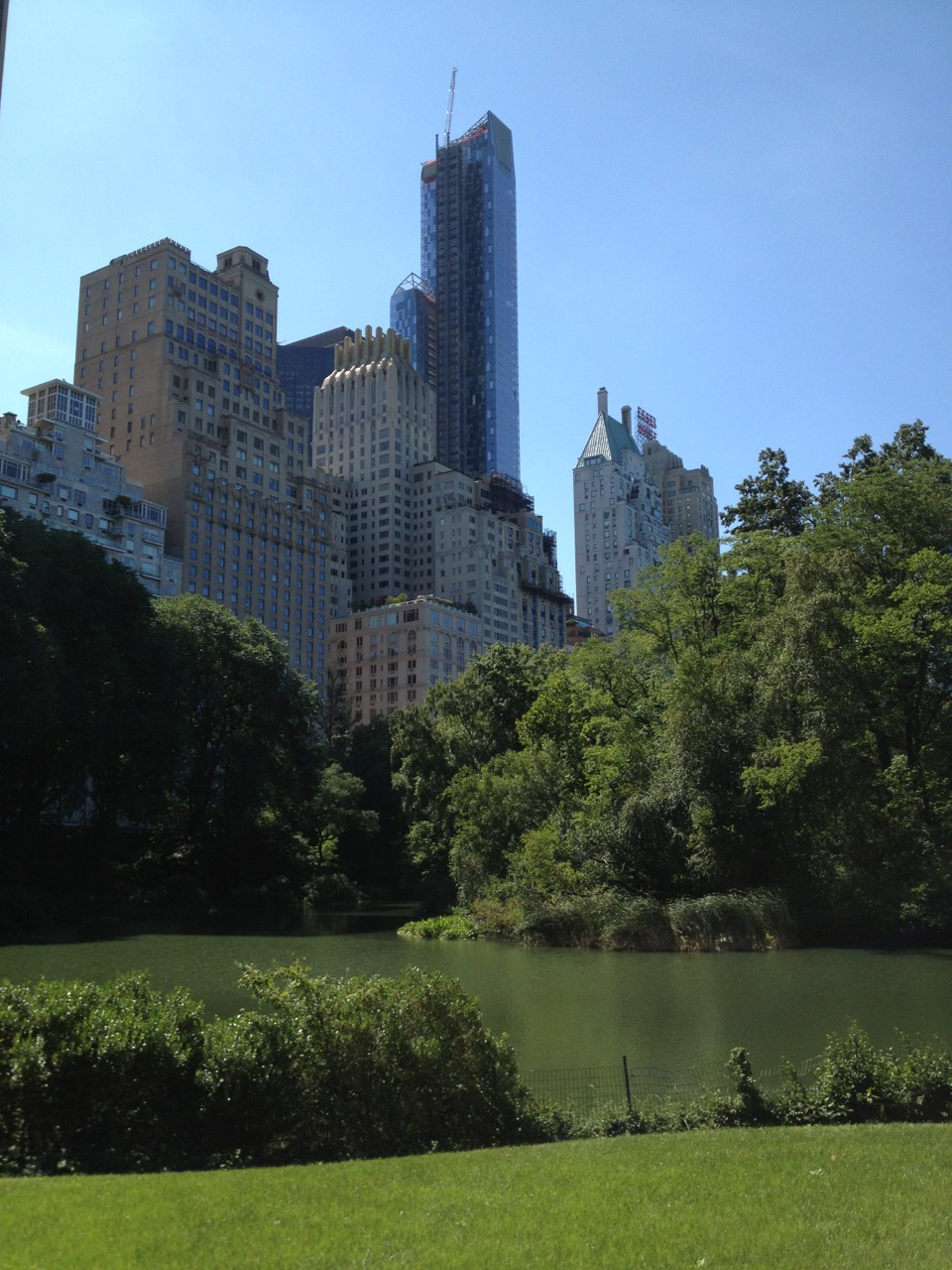 After reading the MC casual thread, I think he didn't slip - though black tie with no socks is a kinda similar "issue"... if the event in question is black tie optional, do you think there's more leeway? I personally would never mess with black tie, but YMMV...
Last edited: Aug 27, 2013

Cantabrigian said:
After the hubub over this fit I thought it might be worth having a discussion about what exactly determines the formality of an outfit.

If you aim for quiet coherence, then certain things should always be formal, and in that case, some ties demand some shoes.

If you're willing to "break the rules," then you can wear anything however you want. This is an approach popular with people for whom clothing is a primary creative outlet. Since I have other creative outlets, and my aim in dressing is largely to look good, I choose to aim more for coherence than anything else. That said, I don't slavishly adhere to anything, and I don't like dogma -- meaning I have to understand and agree with a "rule" before I follow it.

Note that I stole this approach from Vox.
"So, I am a classicist. I am fond of discipline. I find men's clothing fascinating because sometime between, say, 1930 and 1936, a handful of basic shapes were created and still prevail as a sort of scale of expression, with which every man can project his own personality and his own dignity." -- YSL

Here's what I think is the crux of the issue: how do you judge whether an outfit works?

If it is according to conventionally-accepted criteria, then of course no outfit that is seriously unconventional can possibly appear good to you. It would be impossible to consider any combination outside of those conventionally-accepted, as looking good. So, you could either combine formal elements together in the expected way to create a formal look; or informal elements together in the expected way to create an informal look. Obviously, some minor variations are accepted, but only within a reasonably small "box". Oversimplifying, the first consevative-formal category of looks are what the taste thread tried to select for in its first few pages, and remain what generally gets lots of thumbs-ups in the regular WAYWRN despite the frequent criticism of its content. The second conservative-informal category are the centre of gravity of what's liked in the MC casual thread (though there are plenty of the next para's fits too).

However, if you allow subcultural judgement (i.e. allow for a greater-than-conventional variation from the norms, or - more simply but again oversimplifying - allow for fashion), then other looks can begin to also look good. For example, combining conservative and non-conservative elements together to create an informal look. The photo cantab. links to is a great example of this: everything is conservative except the negative break trousers; combining them together creates an interesting informal look. I think it works on that level. Just because it's become more popular over the past 5+ years doesn't make it a formal look; it's still an informal one. But a good example of one. Many of the better SW&D looks also fall into this category: combining conservative and non-conservative elements together in interesting or pleasing ways, to create good informal looks.

If you skip the socks...I think you lose the "formal" tag...nothing wrong with that...

Cantabrigian said:
After the hubub over this fit I thought it might be worth having a discussion about what exactly determines the formality of an outfit.

Like YRR92, I'm taking my cues from Vox today, so my take on this particular ensemble is that it would sit pretty firmly in Vox's dressed-down "city suit" category were it not for the lack of socks. I don't recall Vox's model actually mentioning where forgoing the socks sits on his city-country continuum, but I think we can safely assume that he would consider it a "syntax error." Hence, this ensemble is one of those "neither fish nor fowl" outfits that are all too common in the menswear blogosphere.


Punjabjat said:
If you skip the socks...I think you lose the "formal" tag...nothing wrong with that...
Click to expand...

Wrong. You don't lose the "formal" tag, and you don't look casual, but you sure look like a boorish try-hard.
Last edited: Aug 27, 2013
*** ventless crew *** *** teutonic crew *** “Whenever you have learned to discriminate the birds, or the plants, or the geological features of a country, it is as if new and keener eyes were added.” -- John Burroughs

I'll never understand the no socks thing.
http://ivorytowerstyle.com/ Some Ties and Pocket Squares for Sale Attolini Suit and SC for Sale

I urge patience and perseverance. Posterity will refer to these troubled times as The Great Socks War!

*** ventless crew *** *** teutonic crew *** “Whenever you have learned to discriminate the birds, or the plants, or the geological features of a country, it is as if new and keener eyes were added.” -- John Burroughs

I do think that there is a heirarchy of formality and that it generally does not work well to mix and match elements that are from extreme ends of that heirarchy. One can safely go a level above or below depending on context, but that's about where it should stay. I lack the time and patience to do a detailed accounting of formality levels of every article of clothing, so am sticking to broad categories of outfits. I may edit / add if I have time.

Level 2 - Conservative suit, tie, oxfords - The oxfords can work with a more casual suit but generally should stay here. Ties obviously can move down and be paired with odd jackets, though certain wedding ties, satin ties and the like will look weird with a lot of odd jackets and should not go below blazer and greys IMO on the formality scale, though this can be texture driven more than strictly formality driven.

Level 3 - Casual suit / odd jacket, tie, monk/derby/loafer - Some ties that look great with a casual suit or odd jacket might look wrong with worsteds, though I think this is more color / texture driven than formality in most cases. Monks IMO could be elevated to work with conservative suits. Conservative derbys might work with a heavy flannel suit but generally should stay at this level or below.

Level 4 - Casual suit / odd jacket, no tie, monk/derby/loafer - Yes, I know some argue that no suits should be worn without a tie. I generally agree but am adding casual suits (linen, seersucker, tweed) for the sake of argument.. The shoes can mostly go up to Level 3 or down to Level 5.

Level 5 - No jacket, denim, loafers / boat shoes, etc. - Most things here can probably go up to Level 4 but pair with caution. Tweed odd jackets look better with denim than a navy DB blazer. Don't wear boat shoes with a casual suit and probably not with a lot of odd jackets.
-ArchibaldLeach

Would I be right in assuming that you'd place no socks at level 5 or below?
Last edited: Aug 27, 2013
*** ventless crew *** *** teutonic crew *** “Whenever you have learned to discriminate the birds, or the plants, or the geological features of a country, it is as if new and keener eyes were added.” -- John Burroughs
E

RDiaz said:
After reading the MC casual thread, I think he didn't slip - though black tie with no socks is a kinda similar "issue"... if the event in question is black tie optional, do you think there's more leeway? I personally would never mess with black tie, but YMMV...
Click to expand...

Strictly my opinion (and this is not to pile on southernstyle, he is a young kid and he has more style than most and if you aren't going to experiment when you are young, then when are you going to do it?), but while some rules are made to be broken (and that sometimes separates the merely well dressed from the stylish) it is important to know which rules cannot be broken. A tuxedo, with anything other than proper shoes, is a huge failure. Why? Well, I mentioned how breaking rules has been a hallmark of stylish dressers. Astaire with the ties as belts, the Duke with, well, almost everything, Grant with the BD collar french cuff shirts etc. but one thing they never did, was break the rules of formal wear. Wearing a tuxedo sockless with slippers is akin to wearing basketball shorts with wingtips. If the point is subversion, then you have succeeded but you can't expect to participate in the game nor be surprised when everyone is looking/pointing at you. So you a creating a scenario where you are not the focus but rather your feet are. Now if this is an event where the point was to "dress down" formal or something of that nature, or something where everyone is dressed like Hamish Bowles, than that is a different scenario. But if this is a proper black tie event, where the dress of the day are normal tuxedo's, then you are standing out in a bad way.

Along those lines, I also feel that the guys that dress in full tails/top hat for formal events are equally wrong. While there is obviously a historical precedent for that type of formal attire, you have to take into consideration not just appropriateness of an outfit but also current mores. While it is impossible to tell, I seriously doubt that the Astaire's of the world, if they were still around today, would wear tops and tails to formal events. They would most likely adapt with the times. They would still be stylish and great dressers, but they wouldn't show up to an event with a room full of "normal" tuxedos wearing tails, a cane etc. I think you need to be careful to not stand out for the wrong reasons.

This is just my opinion and at the end of the day, I always tell me to wear whatever makes them feel the most comfortable.
Zegna fabric:
https://www.styleforum.net/buyandsell/zegna-spring-summer-and-winter-fabrics-wool-linen-cashmere-part-1.16607/