Greg Smith, an executive director at Goldman Sachs, quit the firm today and excoriated what he says are its bad morals.

According to Smith, Goldman’s culture encourages employees to hold clients in contempt and to think only about maximizing short-term revenues. His diatribe joins a long list of diagnoses claiming that US- and UK-style high finance suffer from a pervasive culture of short-term-only thinking and adulation of get-super-rich-super-quick schemes, aided and abetted by weak-kneed, co-opted, under-funded, and disrespected regulatory agencies. Wall Street and City bankers from 50 years ago, who had seen or heard or been seared by what short-term-only-thinking did in 1929, would have been appalled by the goings on: 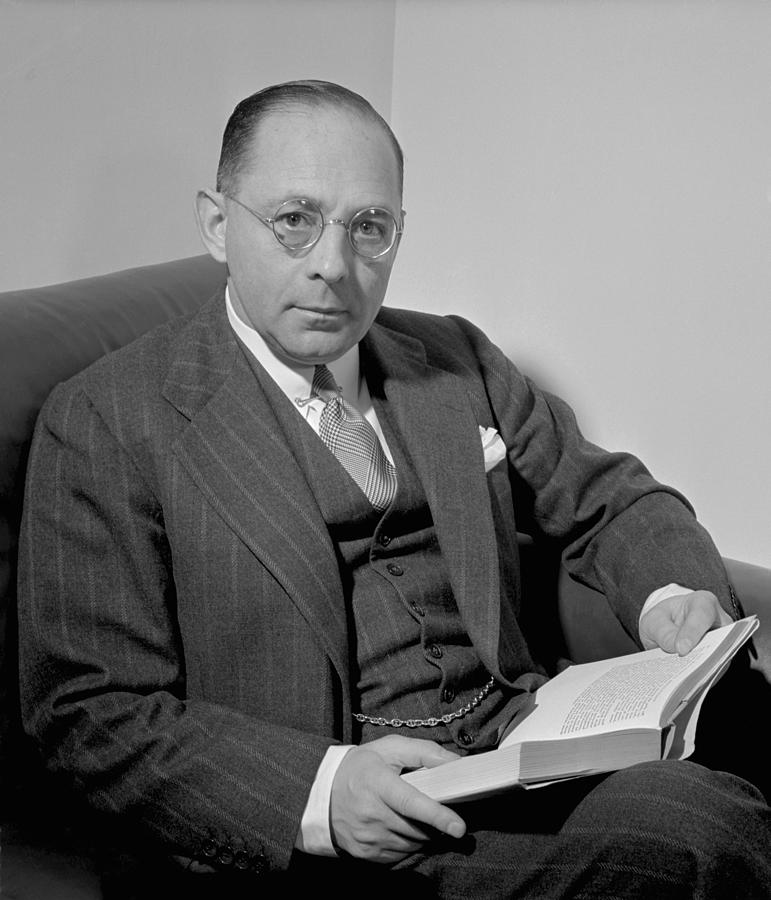 Bankers in Canada, which actually believes in regulation and responsible finance, were about as unsmug as any human could be, considering that they’d endured 20 years of being called cowards by Wall Street and the City: 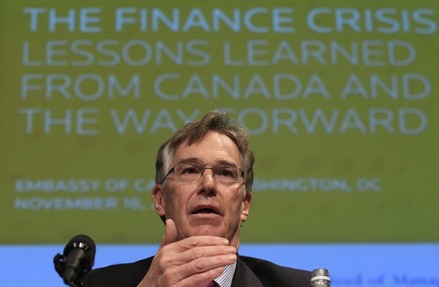 Why? I think some of the responsibility lies with clothes designed for Gordon Gekko by none other than Alan Flusser and Alexander Kabbaz, who designed and made Gekko's shirts; Ellen Mirojnick was the Wall Street costumer who hired them. Specifically, I’m thinking of the ensemble they crafted for Gekko’s “Greed Is Good” speech: 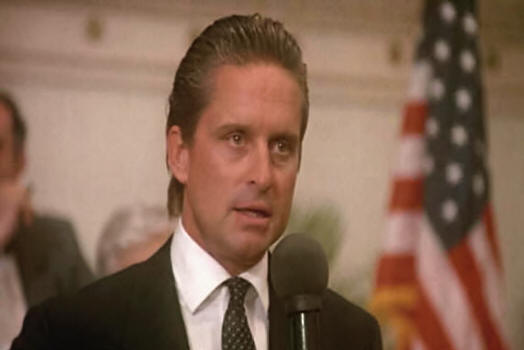 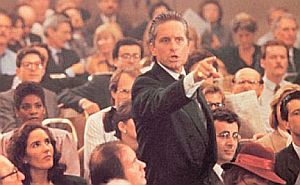 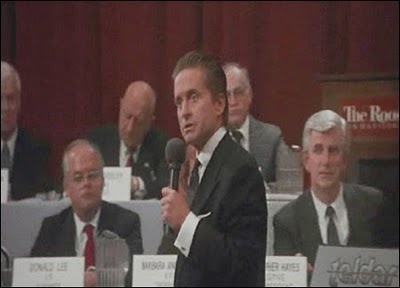 Here we have a solid charcoal or oxford gray double breasted suit, a solid white or off-white shirt with a medium spread collar, a black woven silk tie with what seem to be white spots, and a white handkerchief barely peeking out of the breast pocket. As nods to 80s fashion, the coat’s gorge is low, the shoulders wide, the chest draped, the cut button-one; but all done within the bounds of classic style. The shirt’s collar sits high on the neck, and the edges of the collar leaves curve to form a rounded shallow arch: all for a more formal and sober look. The tie is knotted in a small and precise four in hand. Above all, no one piece shows any visible excess, and all combine beautifully. We both see and do not see the ensemble: we see Gordon Gekko magnified. (CBDers, note how Gekko wears CBD almost to the letter: he even avoids a solid tie.)

This ensemble, I think, helped cause the 2008 financial meltdown and the moral meltdown at Goldman Sachs which led Greg Smith to resign today. Why? Because it gives Gekko authority: it makes his message authoritative for the young people who were moved by the speech to try to make it super-rich super-quick on the Street. Before the speech, we already know that Gekko is rich, powerful, self-made, and perceived to be successful. What he lacks until the speech is authority. Before the speech, we have no compelling reason to believe his basic message: “[Short-term, myopic] greed is good.” Nor do those young people who were converted by the speech. But when he dons this ensemble and starts making arguments appealing to the invisible hand, he acquires the requisite authority. We—and they—overlook the fact that the arguments equivocate between short-term, myopic greed and long-term, enlightened self-interest greed. For who is against a reasonable profit?

It’s because of the ensemble that we are willing to overlook the equivocation, to want to believe him. Had Gekko worn the flashy, non-CBD ensembles he wears at other points: 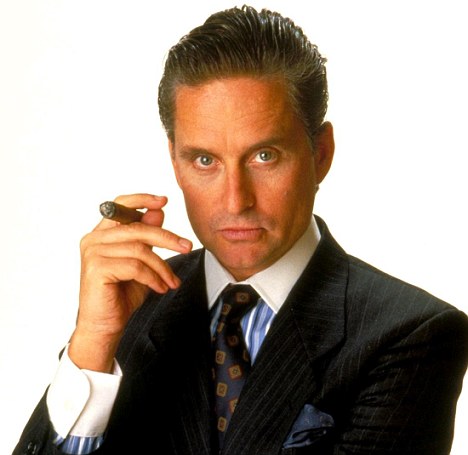 or at the end of WSII: Money Never Sleeps: 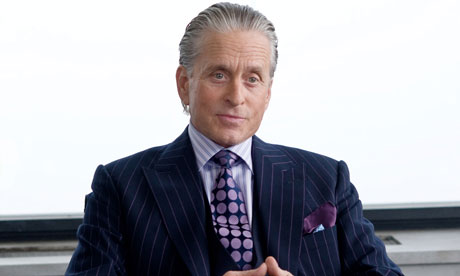 we would have held back. We would all have harbored doubts, and asked questions. So would the Gekkoites who helped run Wall Street smack into 2008. But Alan Flusser, Alexander Kabbaz, and Gordon Gekko understood how CBD lends a man authority. And so the ensemble worn at the Teldar Paper shareholders’ meeting helped cause the 2008 meltdown. Without it, Gekko would have lacked the authority necessary to inspire the hordes of young fans to try to make it big quick—who cares how!—on Wall Street. Of course, Mirojnick, Flusser, Kabbaz, and Douglas couldn’t have foreseen what happened: they couldn’t have known that all the conditions were in place to make Gekkoism the reigning ideology on Wall Street, so long as they put GG in that one authoritative ensemble. They struck the match; but it was we who ran up and doused it with gasoline.

And so it goes. Clothes don’t much matter, except when they do.


(This may explain why, when Gekko makes his comeback in London in Money Never Sleeps, Ellen Mirojnick, who costumed both films, does not give him a truly CBD ensemble. Experience shows that Gekko in CBD spouting greed-is-good endangers the world economy! Mirojnick, Douglas, and Oliver Stone weren't willing to run the same risk.)
Last edited: Mar 14, 2012

Very interesting theory... If anyone is interested in Greg Smith's resignation there's a huge thread going on at http://news.ycombinator.com/item?id=3702253
I liked this the most:

What a brilliant post. Full marks to you sir!