Almost every single designer or brand representative at Pitti Uomo has something to say about how “easy” their clothes are to wear. It’s one of those tradeshow buzzwords that, like “fabrics,” usually mean absolutely nothing. Harris Wharf London, run by the unfairly charming siblings Giulia and Aldo Acchiardi, delivers on ease as well as on fabrics. All of the jackets are unlined and unstructured, and everything is produced with simplicity in mind. It’s an accessible brand, both in price and styling.

Aldo and Giulia are the children of a Turin-based family with its roots in milling and manufacturing. Giulia is the designer, and Aldo handles production and distribution. I knew next to nothing about Harris Wharf before I started talking to Aldo – I’d seen it mentioned a handful of times; seen a couple of photographs, run across it on the occasional webshop – and it was almost a relief to be able to put the brand in context.

Okay, so maybe I’m biased. When people smile at me and want to talk to me about what they like and what they do, I might respond to that enthusiasm – just a little bit - and Aldo and Giulia have more enthusiasm than the inhabitants of several Pitti pavilions combined. I didn’t “sit down with them,” but I did end up talking to them for longer than the three minute average I spent at most other booths and might have managed not to sound like an idiot, until I started taking pictures while they were staring at me and giving me photography tips. And here I thought I did well under pressure.

Jasper L: Can you tell me about the beginnings of the brand? How it all started?

Aldo Acchiardi: We began with opening our own shop in London, in Islington. My sister is the designer, and she was studying in London at the Marangoni fashion school, and we decided to open this shop in Islington, which is the area where we live. The name of the shop is called “Workshop,” and it’s kind of where we developed this new concept for this new brand called Harris Wharf London – which is the name of the area where we live; which is straight on the canals. And basically, after having the shop we developed this collection and introduced it in Paris to some key retailers – we were approached by people like Merci in Paris, Isetan in Tokyo, Barney’s in New York.

JL: So, you started as a boutique before the collection came out.

AA: Well, we already had out family factory in Torino, so we already had the production structure. But obviously having your own store and testing your products to the final consumer helps you in developing the collection much quicker than you would otherwise do. So it was crucial for us to have both the Italian industrial structure and craftsmanship, combined with the London quality and product focus for the shop.

JL: So are your products made here in Italy?

AA: Yeah – the women’s collection is totally made in Italy, but the men’s collection is also produced in London, because while staying in London obviously we found some really good tailors that we can trust with production. But the fabrics are all from Italy – that’s the crucial thing about the Harris Wharf.

JL: Does the concept for the collection stay the same every season, or do you work with new ideas, new cuts, new...?

Giulia Acchiardi: Always new ideas and new cuts, but the technique stays the same. So, raw edge, unstructured, and always working with knitwear. So knitted fabrics like jerseys, that’s the core concept.

JL: So, what’s the idea behind the collection? What sort of person would you aim it for? If there is such a person?

AA: Islington, where we have the shop, and where we developed the product, is a very unusual area in London because it’s a nice mixture between Londoners, English and Europeans; but, very mixed and quite young. So, a person in their thirties, it’s our traditional customer in Islington. You see it on a Sunday. Families – young families – in their thirties coming...

GA: Even though I have to say, it’s very transversal, so you can literally – our jacket could be worn from teenager to ninety years old.

JL: Yeah, it all looks very – very easy to wear.

GA: Yes, it’s very easy. It feels like a cardigan, but it’s actually a jacket. So it doesn’t have that formal allure, and it’s not pretentious; it’s just very easy to wear.

There. We said it, both of us. “Easy to wear” doesn’t mean simple, though. Giulia walks me through her favorite pieces for the new season – a terry jacket, a full-cashmere piece, and their traditional “Polair” fleece, developed by her father.

So, what have we learned, other than that I reflexively say “so” too much? Well, for starters, I am reasonably good at smiling and saying “mm-hmm” with a slightly upward, almost valley-girl lilt in a way that – I think – encourages people to talk more. Or makes them feel that I’m interrupting them.

It's also worth noting that the work of a couple of generations of Italian millers, manufacturers and designers make for nice clothing. Harris Wharf London is noticeably different from most of the other innumerable brands at Pitti who offer unstructured blazers. The brand is sharper, more youthful, and more urban. It is, perhaps because it’s a product of two cultures with such distinct and disparate tailoring styles, very cosmopolitan. 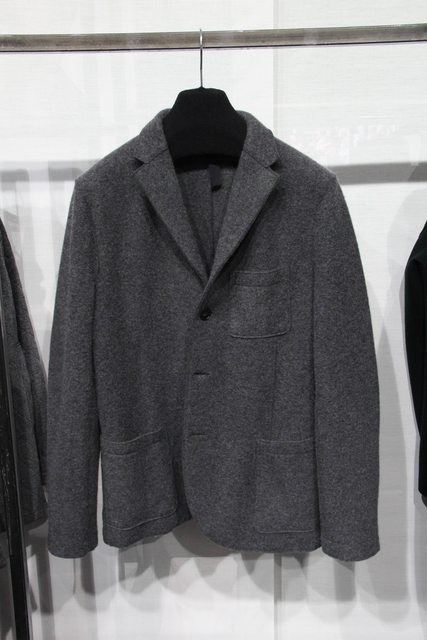 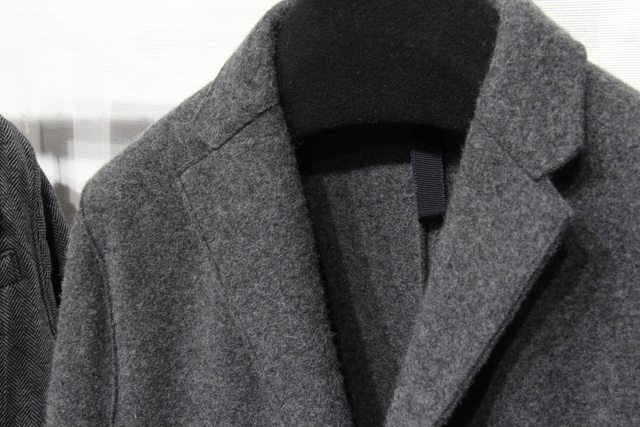 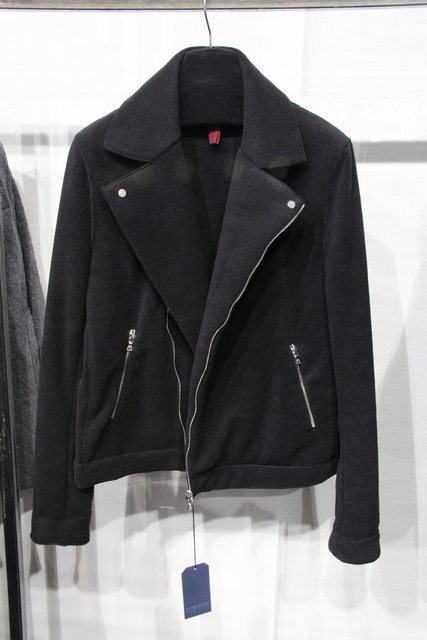 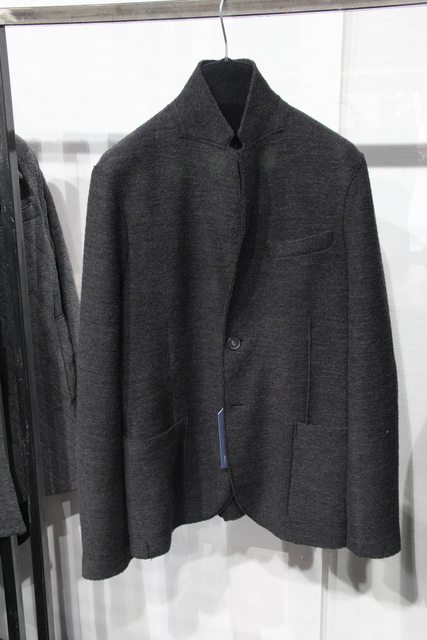 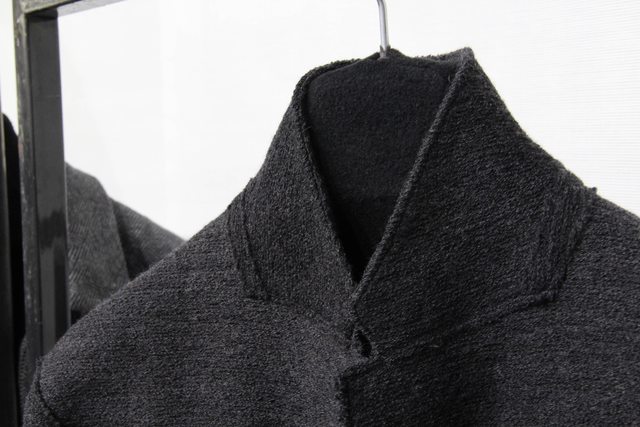 looks great, very Barena-ish. Thanks for the writeup!

Great read, been really interested ever since mentioned in sw&d jacket and suit thread

Really like a lot of what I saw when I google'd their brand - very accessible, very cool.
https://instagram.com/matt.dunne

Nice stuff. I tried the coats last year at Nitty Gritty, very soft , knitted-like fabrics (are they at all windproof?), and slim fits (a 54 was too small on me).

just noticed this brand at silver and gold. great to learn a little more about them.

I'd encourage you guys to try out the pieces. It's really not cut like Barena - it's sharper and slimmer - but slouchy in a very, as they said, "Creative-Type" kind of way. You won't look like a slob. Also, the price is very good. I think that if you're looking for a piece like this it's a good brand to check out.

Sadly, I can't help with sizing - but many of the lookbook shots I've seen tend to show it a bit tighter than we're used to from the other unstructured Italians. Most of the fabrics are jersey, so perhaps they're aiming for a tighter look.
INSTAGRAM

Synthese said:
I'd encourage you guys to try out the pieces. It's really not cut like Barena - it's sharper and slimmer - but slouchy in a very, as they said, "Creative-Type" kind of way. You won't look like a slob. Also, the price is very good. I think that if you're looking for a piece like this it's a good brand to check out.

Sadly, I can't help with sizing - but many of the lookbook shots I've seen tend to show it a bit tighter than we're used to from the other unstructured Italians. Most of the fabrics are jersey, so perhaps they're aiming for a tighter look.
Click to expand...

Yes, a tighter fit. FWIW, a size 48 fits me well. Because of the construction of the shoulders, the jackets are not particularly amenable to sizing up.
"Blue Denim in their Veins"

Your best bet is to call the company store.
"Blue Denim in their Veins"

gdl, i'm sure you could have found enough lanky bros to justify carrying HWL!
.

gdl203 said:
We spent a lot of time looking at HWL.  They're cool but one must note that they are very simply made garments.  Essentially mono-layer pieces with the felted or fleece fabric cut and sewn without any internal construction, canvassing for shaping or lining.  The positive is that it results in a very well priced jacket in a great looking material, the negative is that they are a bit unforgiving to those who are not shaped like runway models...
Click to expand...

I find that the thickness of the fabrics gives them some structure.
"Blue Denim in their Veins"

Is there an official thread for Harris Wharf London? Otherwise, with the OP permission may we start listing stockists that have items in stock?