mak1277 said:
What percentage of people would you estimate truly care how they dress (regardless of whether that’s CM, SWD or whatever dress culture you want to include)?
Click to expand...

Lots of tshirts and athletic gear. Not sure how much is actually open here work wise, though. 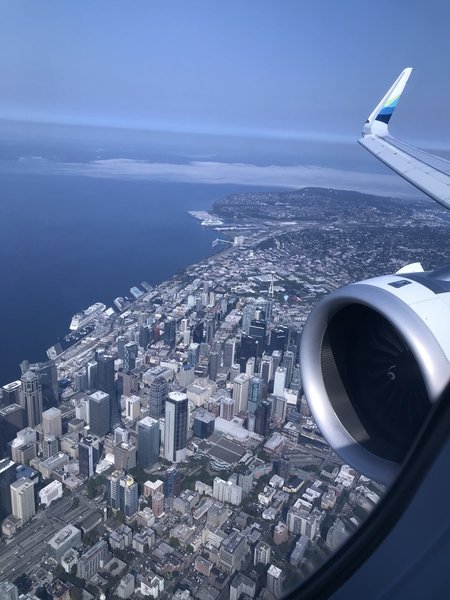 Okay, just had a Rye Manhattan at the Four Seasons and all is well… Folks were dressed casually but coherently.
"Sorry to jump in, but @smittycl and _________ you are indeed talking past each other. However, only Smitty is correct."

smittycl said:
Okay, just had a Rye Manhattan at the Four Seasons and all is well… Folks were dressed casually but coherently.
Click to expand...

Did see several guys tieless in CM suits.
"Sorry to jump in, but @smittycl and _________ you are indeed talking past each other. However, only Smitty is correct."
A

London is extremely geospecific. EC4/Canary Wharf at 8-9am will be all suits, or shirts and slacks these days. South Ken has gone the way of Ferraris and fuerdais. Knightsbridge - particularly around the Dorchester - is the land of tracksuits coming out of gold plated G class. The screenshot from the video presentation is in a more tourist heavy part so of course you'd see more T shirts.

My British co workers are consistently the most formally dressed on Zoom calls, including the ones who have long since moved to Asia or the Middle East. Not to the level of a tie but we still see jackets. The sole exception is a lawyer in rock T shirts and heavy Northern accent but he knows his stuff so gets away with it. I personally took maybe a decade to shake that stuff off after moving from London.

SG office is T shirts and shorts, in the rare days every few months where there isn't some kind of phase 3.4 enhanced special measures with daily random inspections by the gov and "if you have lunch in the dining area try to sit at the opposite end from any lunching colleagues and don't talk". It's to the point where even wearing a polo shirt, you feel like you've stepped outside the Overton window. You're supposed to show up in your pyjamas, or something. Very strange times.

I like that La Bernardin is the restaurant cited here.

sometime around 2005, maybe 2006 or /9, widespread panic playing radio city music hall. My friend and I were early, popped into a restaurant for a pre show drink. We were wearing aloha shirts or button down type concert loud shirts. Didn’t know what the restaurant was, just walked in because the bar area looked nice. It was La Bernardin.

jacket required. But they didn’t turn us away. Just asked what size blazer we wore and provided one for us and let us hang out for a while.

I appreciated that. They had standards. They expected a certain amount of respect shown to their establishment and for their effort. But they weren’t snobby or exclusive about it. They were welcoming and accommodating.
sort of like, we are fine if you didn’t know, but let’s show respect to the other diners and the atmosphere we have created and we will help.

I’m also guessing summer might have some to do with the casualization going on right now.
I saw La Grenouille mentioned. I have eaten there numerous times. I never recalled a jacket being required. But then again, I probably didn’t go during the summer, and I generally would wear a sports coat or blazer as my first jacket option in cooler weather anyway. But in the summer, well, it’s hot and humid and muggy and sticky and wearing a jacket is no fun.

rjc149 said:
I believe this will pendulum back, in the other direction, however. My father noted a drop in formality in high finance settings immediately after the 1993 World Trade Center bombing. For months, he wore jeans to work. Then it was relegated to casual Fridays, then gradually, it was back to suit and tie at all times.

I think this will repeat itself.
Click to expand...

that has been my theory.

there are reasons why people dress well.The pendulum is swinging one way right now, but the reasons people dress well, whether it befor self confidence, appreciation for finer made/designed clothes, an attempt to show respect for a moment, a desire to make positive impressions, or just for their own self comfort in being secure in familiar clothing….

Those reasons aren’t going away. So while the pendulum is swinging one way, it will swing back as people remember why they used to dress well.

I think back 15-20 years ago when Biz Caj really took off. Soon it was khakis and j crew button Downs with Johnson and Murphy or cole hann cemented rubber sole shoes for everyone.
Well, there were a number of people who were like, why am I ditching my nice stuff to look like the guy working at Best Buy?
man’s then we had a resurgence in more traditional menswear.

I see it happening similar. I see the pandemic as actually accelerating the pendulum back toward people taking more pride in their appearances as they are tired of dressing down the past two years.

I enjoyed your walking tour, but I have to say that it only shows how certain Londoners dress in an unusually hot summer for the city, which will show a very different image in a few weeks from now. I wouldn't expect people wearing formal attires when the temperature is around 80ºF in a place accustomed to another climate, which is the London I know.
Last edited: Aug 2, 2021

rjc149 said:
I agree, it's inconsiderate and disrespectful to take that special feeling away from people by willfully defying the dress codes. I would go as far as to say that it burns my ass.
Click to expand...

I don’t get when people complain about restaurant or club dress codes. Those places are trying to create a certain atmosphere. Show respect to your hosts and oblige, or go elsewhere for your daily calorie intake.

ThreadsofApollo said:
The backpack trend is quite interesting. I would think it would look odd especially in a corporate setting but I assume it's one of those sleek looking leather bags that might "fit in" in such a setting?
Click to expand...

I can’t remember the last time I saw a briefcase. Even going back 15-20 years ago in NYC, and having been on wall street back then. Messenger bags were pretty popular as well as back packs. Back packs were for the trendy Patagonia types and messenger bags for those who had a little more interest in appearance.

a hand held briefcase for a subway commute day after day is a pain in the ass. And most people, even high earners, were riding the subway or hopping in and out of cabs. At some point practicality and convenience matters.

Its all restaurants. Next they’ll want to know if you’re circumcised.