Scotty: why, thank you Jim...
Captain: you're welcome - now get me an alien princess!
Stay right where you are, and wait for society to form itself round you. - Quentin Crisp
P

They know me.
P

rjc149 said:
I work in a traditionally formal financial services industry in NYC. On my day of hire, my manager explicitly told me I was to wear a suit and tie at all times.

My manager hasn't been seen wearing a necktie in well over a year. Now, in the summer, I leave the jacket and tie at home. Riding the subway in July is simply unbearable with a suit and carrying the jacket folded over my arm, like in the old days, is just a pain in the ass.

I also got sauce from a chicken parm hero on a Canali tie. That was it for ties, unless I'm meeting a client.
Click to expand...

That's why Century 21 was the shiznit.
P

Connemara said:
Suits are becoming scarcer in the public sector. This seems like a harbinger of "casualization" as government tends to be stodgy and conservative. Politicians still wear suits, but it's pretty rare to see the higher-level civil servants in a suit on most days.

I rarely need to wear a suit. I do like to wear a sportcoat (no tie), but that makes me an outlier in my office. A lot of the men dress like slobs.
Click to expand...

Has Covid had an effect on suits in the office? Well, many of us rarely even go to an office over the past 16 months. I wear a suit when visiting a client in person and when handlng a court appearance which is still remote, for the time being. But in the office . . . still working out the kinks.
P

pomor said:
Which brings to mind - when people describe something as "classy" to mean "elegant" what is the etymology there? At one point, "classy" meant "conservative" or "upperclass"? Or yes and yes?
Click to expand...

I always thought that one who used the word 'classy' wasn't, by definition.

This entire thread reminds me of the controversy, accusations of racism, the all together shit show and the eventual closure of Bottled Blonde in Chicago.

The “restaurant”, I use that term in quotes as it was more a bar and nightclub, opened in 2015 and closed in 2020. Not because of Covid, mind you. The closing had been in the offing for some time due to lawsuits and complaints about noise, rowdy behavior inside and out and basically a menace to the neighborhood it was in, and given that it was in Chicago’s river north area, that’s saying something.

They really pissed a lot of people off and brought down upon themselves accusations of racism when they posted this dress code: 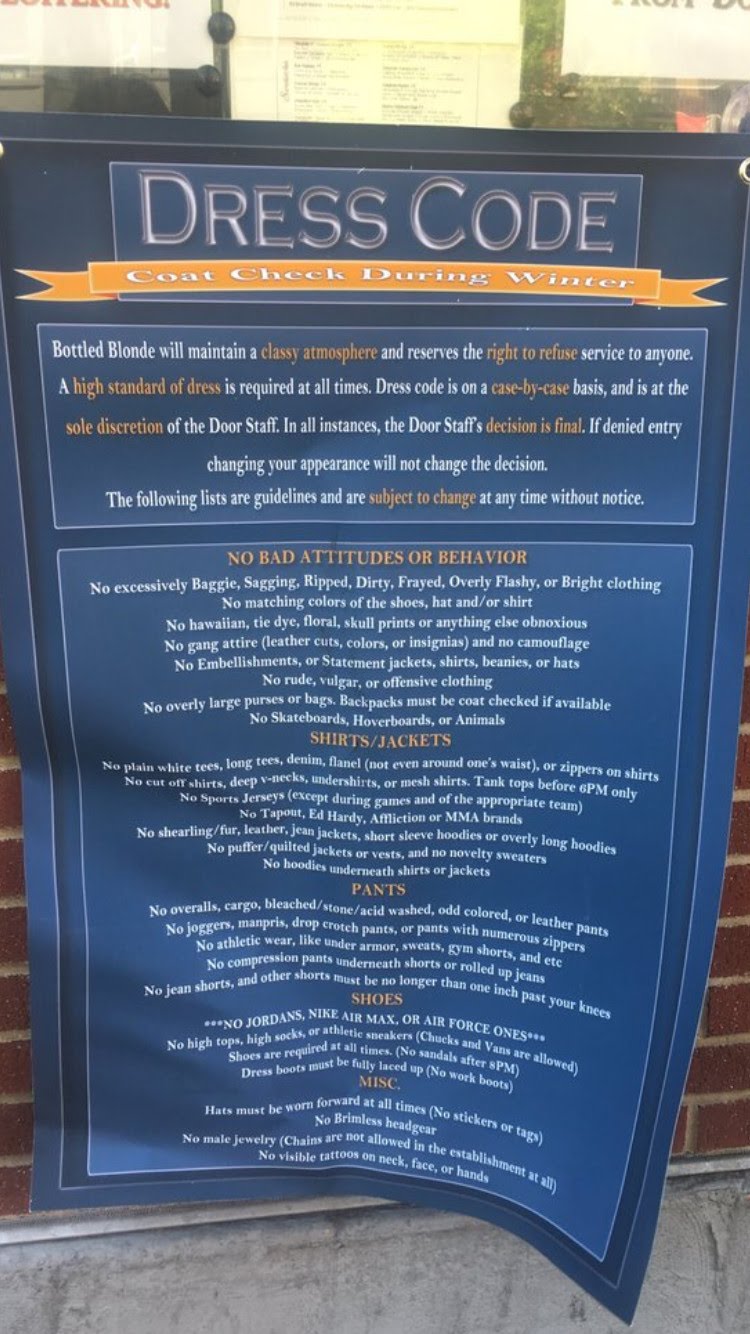 my favorite part is the comment about “classy” and a “high standard” of dress. I can tell you that having been in there once for dinner there was little to indicate that it was either classy or they adhered to any particular standard of dress.

These dress codes are somewhat meaningless though in this case they were more a punchline.

This. I think it's important to make distinctions about economic class and social class; they often go together, but not always, and in recent years, even less so. I have some personal experience with this, growing up in firmly lower middle-class single mother household and now regularly interacting with people on a personal level that I think I might used to describe as "old money". In my experience, this "old money" group makes very clear distinctions between their group and "new money", even when people in the "new money" group have much more money than them.

What I find interesting sartorially is that I have observed that one way "old money" distinguishes "new money" is by clothing: for example, I have been told that even when everyone is wearing the same uniform, like the stereotypical blue blazer, "new money" people are often apparently obvious because their blazer isn't the same one that they've been wearing since their fancy boarding high school, i.e., not obviously worn in. I don't know if this is just a limited experience with the people I was speaking with, but it was an interesting conversation about clothes with a bunch of old ivy-league-blue-blood type men.

I have also had a number of conversations with this group about what is "correct", and what is "not correct" in terms of clothing. Interestingly enough, these distinctions mirror my own experience in an immigrant household. My mother would not have (and still might not be) been happy with me showing up to a dinner at a "fancy" restaurant without at least a jacket on, and regularly comments on the fact that I dress in what she calls "real clothes" to get on an airplane or whatever while others do not.

The last time I went somewhere that required a jacket and tie to enter was the Detroit Athletic Club in 1989. I went to meet a friend for a drink and had to put on a loaner tie. Luckily I was already wearing a sport coat. These days, I wear a suit and tie maybe twice a year when I present something to the City Council of the town where I work. The rest of the time I'm in khakis and a buttondown in the winter or a polo shirt in the summer. Arizona has always been very casual, but I agree it's gotten even more so since the pandemic. Not to get political, but Joe Biden often doesn't wear a tie, and I'm hopeful that will be the final nail in the coffin for ties much as JFK killed men's hats. I'd be fine wearing a suit without a tie, especially if it's one made from these new stretch fabrics that are actual comfortable.
Bro + Trad = Brad

^ I don’t think I’ve seen Biden wear a suit without a tie. I could be wrong. He’s certainly comfortable not wearing one when wearing a blazer.

“If denied entry changing your appearance will not change the decision”

so it was never about the dress code?

It’s a bit insane that the owners would take the time to type this up and not step back and think about how ridiculous that is. Who even shows up to that? Someone who exclusives shops at Banana Republic?

Not sure that Biden is really working with the same charisma that JFK had either. Nothing about him is aspirational for the general public, apart from political office maybe, so I don't see his choices having quite the same effect.

I'm actually hoping more men start giving up ties too, because then I can scoop them all up for nothing at a thrift store and look great in all my new ties.
Stay right where you are, and wait for society to form itself round you. - Quentin Crisp

thatboyo said:
“If denied entry changing your appearance will not change the decision”

so it was never about the dress code?

It’s a bit insane that the owners would take the time to type this up and not step back and think about how ridiculous that is. Who even shows up to that? Someone who exclusives shops at Banana Republic?
Click to expand...

Some of those requirements are totally ridiculous. Overly large bags? No male jewellery? Any place that would bar Cary Grant from entry could not have hoped to last long.
Stay right where you are, and wait for society to form itself round you. - Quentin Crisp

Nobilis Animus said:
Some of those requirements are totally ridiculous. Overly large bags? No male jewellery? Any place that would bar Cary Grant from entry could not have hoped to last long.
Click to expand...

there’s another shit hole in Chicago called “steak 48” which has instituted a somewhat similar dress code and a $100 minimum/person food and beverage order.

I’ve not gone there and probably won’t out of general principal. Too many steak houses in Chicago to have to countenance such bullshit.

Phileas Fogg said:
there’s another shit hole in Chicago called “steak 48” which has instituted a somewhat similar dress code and a $100 minimum/person food and beverage order.

I’ve not gone there and probably won’t out of general principal. Too many steak houses in Chicago to have to countenance such bullshit.
Click to expand...

I've always found the concept of a fancy steak house to be a little odd anyway. Steaks are delicious slabs of meat, but hardly 'haute cuisine.'

I'm expecting a fancy tuna casserole eatery next: open for dinner only, three nights per week. Black tie.
Stay right where you are, and wait for society to form itself round you. - Quentin Crisp
You must log in or register to reply here.
Share:
Facebook Twitter Reddit Pinterest Tumblr WhatsApp Email Link
New posts