Cole haan:  quality or no?

As I mentioned in an earlier post, I'm looking for some black dress shoes for under $200. Armed with a discount coupon, I headed over to DSW. On the advice of someone on this board, I took a look at Mezlan. I ended up buying a pair of moc-toes for $100. But I also took a look at some Cole Haan cap-toes (Memphis II model). Ordinarily I wouldn't have given them a second thought, because they are made in (gasp) India. I assume that Cole Haan has some factory store line. These were $100 as well.

Now, I honestly don't know what to look for in a good shoe (I mean, at the margin I couldn't pick out the better leather, better welting job, etc.). But it seemed to me that the Cole Haan had better leather, was more comfortable, and was constructed equally as well.

What I want to know is whether I'm wrong. Are these Cole Haan's junk, or am I correct when I say that if the shoe said &quot;Made in Italy&quot; on the inside I wouldn't have a second thought.

Also, if anyone has experience with Cole Haan's, how do they hold up?

I can't speak to dress shoes, but I have a pair of Cole Haan driving mocs that I like very much. Leather is nice, seem quite well made. All in all, very nice shoes.
Kai

Cole Hann has a higher end line. It is called Bragano. That concept is similar to Lexus being the luxury line of Toyota, etc. Bragano is made in Italy so there should be no worries about being manufactured in Mexico, India, etc.

I have a pair of tuxedo pumps by them, and the quality isn't bad. On par with about Mezlan perhaps.
http://leisure-class.blogspot.com/

Cole Haan is, it appears, primarily a marketing entity these days. They sell shoes made in the US, UK, Italy, Brazil, India, Mexico.... The Indian-made and Mexican-made shoes seem to be sold only or primarily at the CH outlets, and perhaps at other discount stores such as DSW. I have not been impressed by the shoes that I've seen made in these two counties; the leather looks cheap, and the designs are uninspired. That being said, for $100 you can't expect the world; are they better than the Mezlans? I don't really know. Still, I would try to pick up some AE's or Aldens from e-bay.

Shoefan, this is what just don't get. What basis do you have for the claim that the leather looks cheap? I really can't distinguish is from the uppers that I saw on a pair of Allen Edmonds last week. What are the things you look for in the leather to determine whether it looks cheap/is cheap? And, again, I'm talking about at the margin.

I would not recommend them overall and definitely not at full price.

Neiman's Last Call often has some for around $80 when they run a sale, and this is about all the shoes are worth. Watch for sales in the department stores also. I find Cole Haan products to be terribly overpriced for their quality level. There are so many other better brands in the $200-$250 range that seem to be of higher quality and better styling.

I have tried a few pairs and had some discomfort and the leather has worn horribly. I have had 2 pairs of the City line (lower priced) one pair of Country and then a pair of the Bragano (held up OK but not great).
It is very rare that I see a pair of Cole Haan's that look and feel like a $250 shoe.

What basis do you have for the claim that the leather looks cheap? I really can't distinguish is from the uppers that I saw on a pair of Allen Edmonds last week. What are the things you look for in the leather to determine whether it looks cheap/is cheap? And, again, I'm talking about at the margin.
Click to expand...

Well, it's a bit hard to say without comparing the shoes side by side. But, based on my recollection, I think the CH's often look very shiny, with a sheen that to my eyes often looks &quot;plasticky.&quot; I believe this is because they use a corrected grain leather that is finished with some sort of top finish that gives the shine. Now, I didn't see the shoes you were looking at, and I'm sure not all the CH's use the same leather. If you like them, buy them. I just doubt they are particularly well made or have very good materials. AE uses pretty good materials, though their upper leather isn't the greatest -- it is often also corrected grain (aka bookbinder leather), unlike Alden (I think), Green, etc. Really good leather will take on an improving shine/patina over time, whereas cheaper leather will never look as good as it did the day you buy it.

Unfortunately Cole Haan is not what they used to be. Years ago, when they made more of their shoes in the USA, the shoes at least that I purchased were well-made shoes for their price range. One of their basics, the brush-off penny, was a pretty decent shoe for the price and having recently seen the Mexico-made version, they have come down a number of notches. Plastic-looking things, but made with a corrected grain finish (see posts on this topic). I have seen a line of their shoes made in Italy (not Bragano) that featured a cap toe, wing tip, monk that had a retail of $550 that was a nicely made shoe, much of which in speaking with the main office said a lot of the work was hand done. Beautiful shoes the ones I have seen. They fit well, looked good, with many nice features, but at $550 perhaps not worth it. The line was discontinued around the year 2000, but some outlet stores still have the shoes around, the black versions priced as low as $95, a bargain for that shoe. Here are some pictures of the shoe for reference, in black:

They had the shoes in a dark brown, burgundy, and black. In person I thought the dark brown and the burgundy versions were quite striking for a wing tip.

Cole-Haan is a brand, not a manufacturer. There are so many shoes constructed using so many different construction techniques with so many different levels of quality that it's really impossible to categorize them as high-quality or junk. Some Cole-Haan shoes are good, some are bad, and some are indifferent.

It really is a shame that Cole-Haan no longer sells the line of shoes that JohnMS posted pictures of. Stylistically, they weren't exactly my cup of tea, but they were undeniably of higher quality than anything I've seen wearing the Cole-Haan label now.

I find that they are more comfortable as my Church's or Allen Edmunds but the craftmanship and sturdy construction is not the same. I figured Coles will last one to two seasons. Allens will last way beyond that.

How are Cole Haan leather belts?

You guys resurrected a thread that was 9 years old. Well done.

I have a 2 pairs of CH and it is has very nice leather even if it is made from India.
My Colton Winter stays in good shape and minimal creases that can hardly see.
Last edited: Sep 17, 2013

Is there anybody has an old picture of CH factory?

What can the shoe experts here tell me about these shoes that I got today? They are black leather, made in Italy, stitched leather soles (how do you know if the stitching is good, how do you know if the soles are any good?). I couldn't find them with Google to find out if they were good quality, how much they retail for, etc. The numbers inside next to the place where the size is stamped are: C10219 9 1/2 M840. I couldn't find any information using these numbers either. So I turn to the folks here.

Here are a couple of photos: 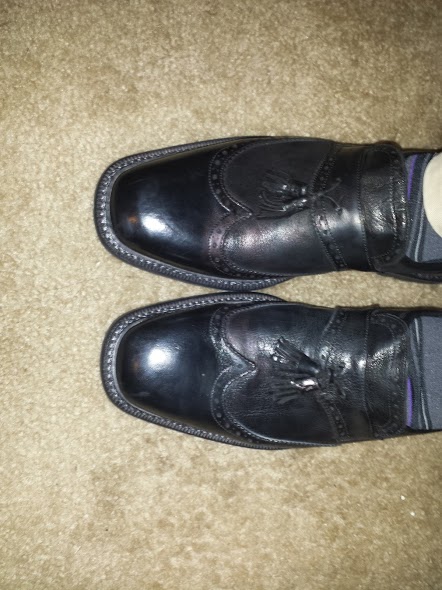 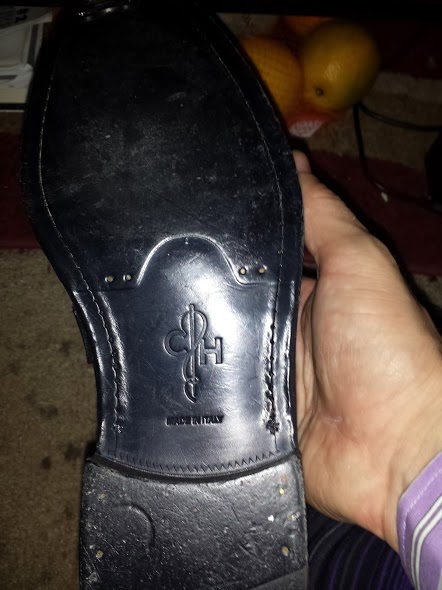 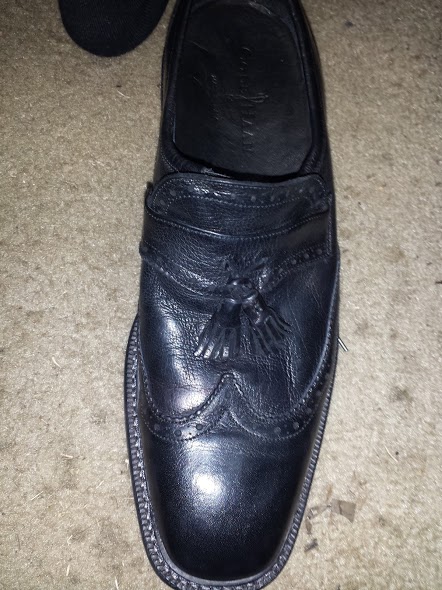