Can You Help Me Identify This Edward Green Shoe Plz???

A friend is selling this Edward Green shoe for a rather high price (600.00US)

I was wondering if anyone out there might know where these came from... Is it worth it? I think they are pretty sexy. Thanks in advance! 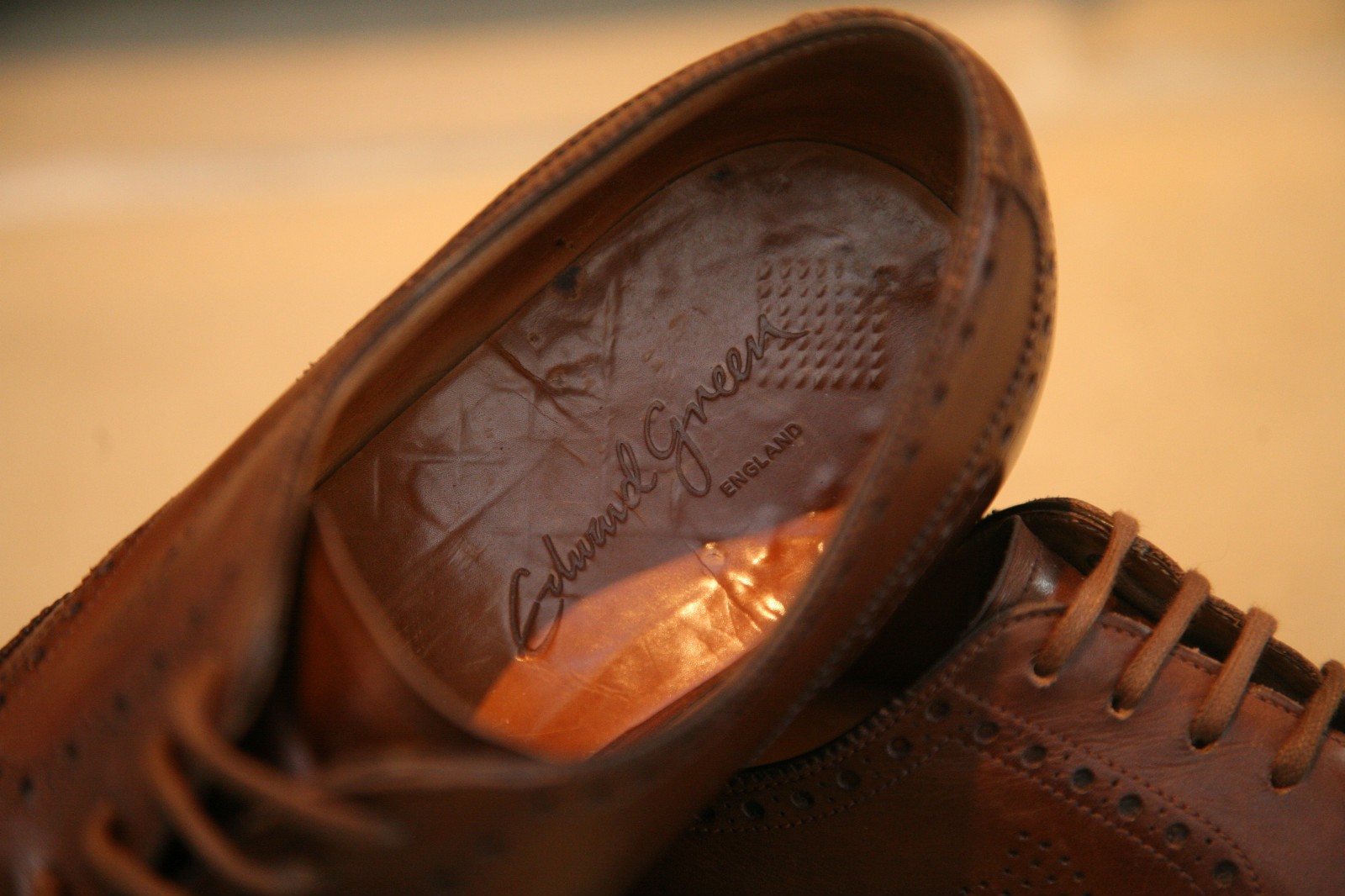 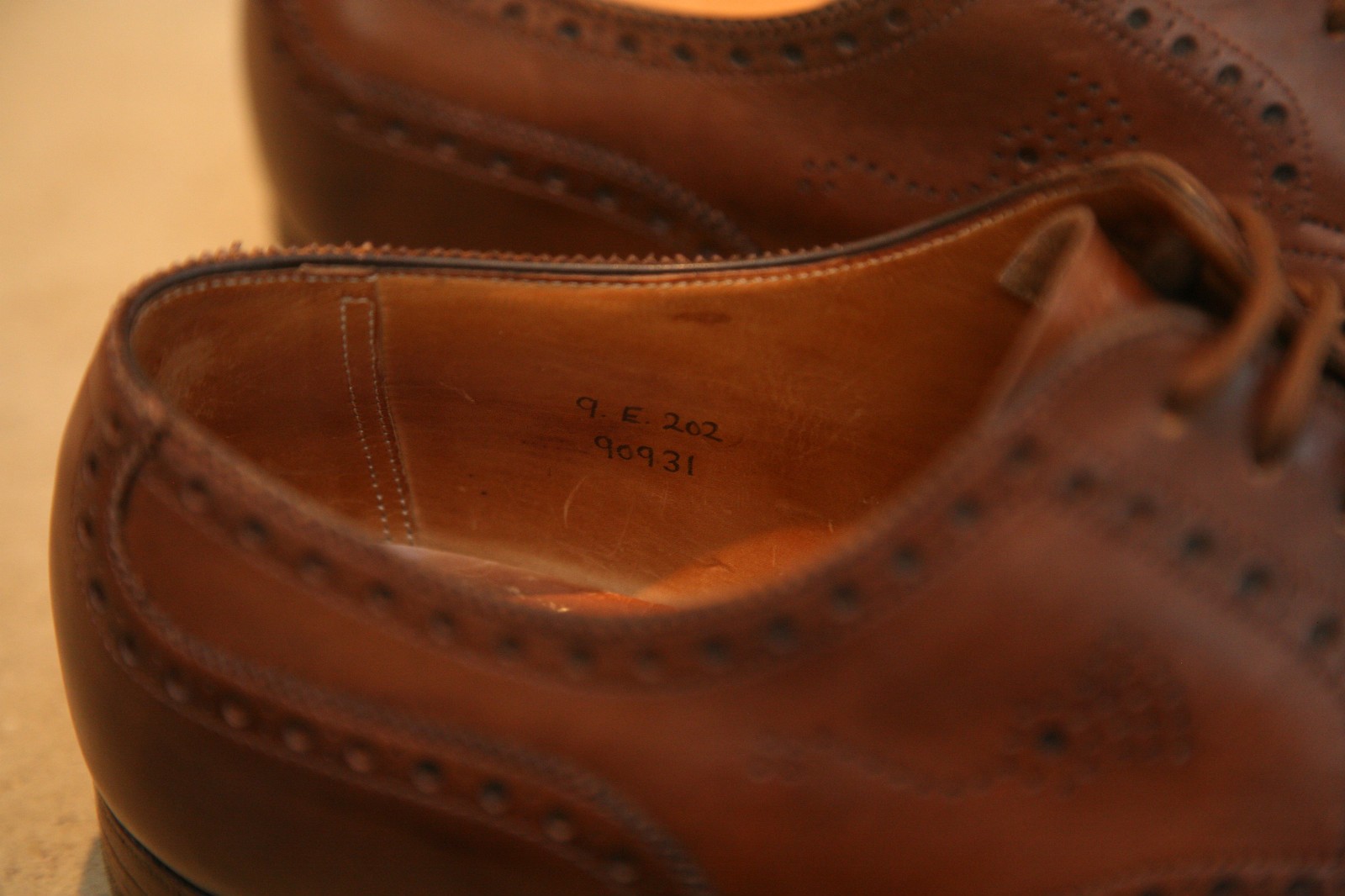 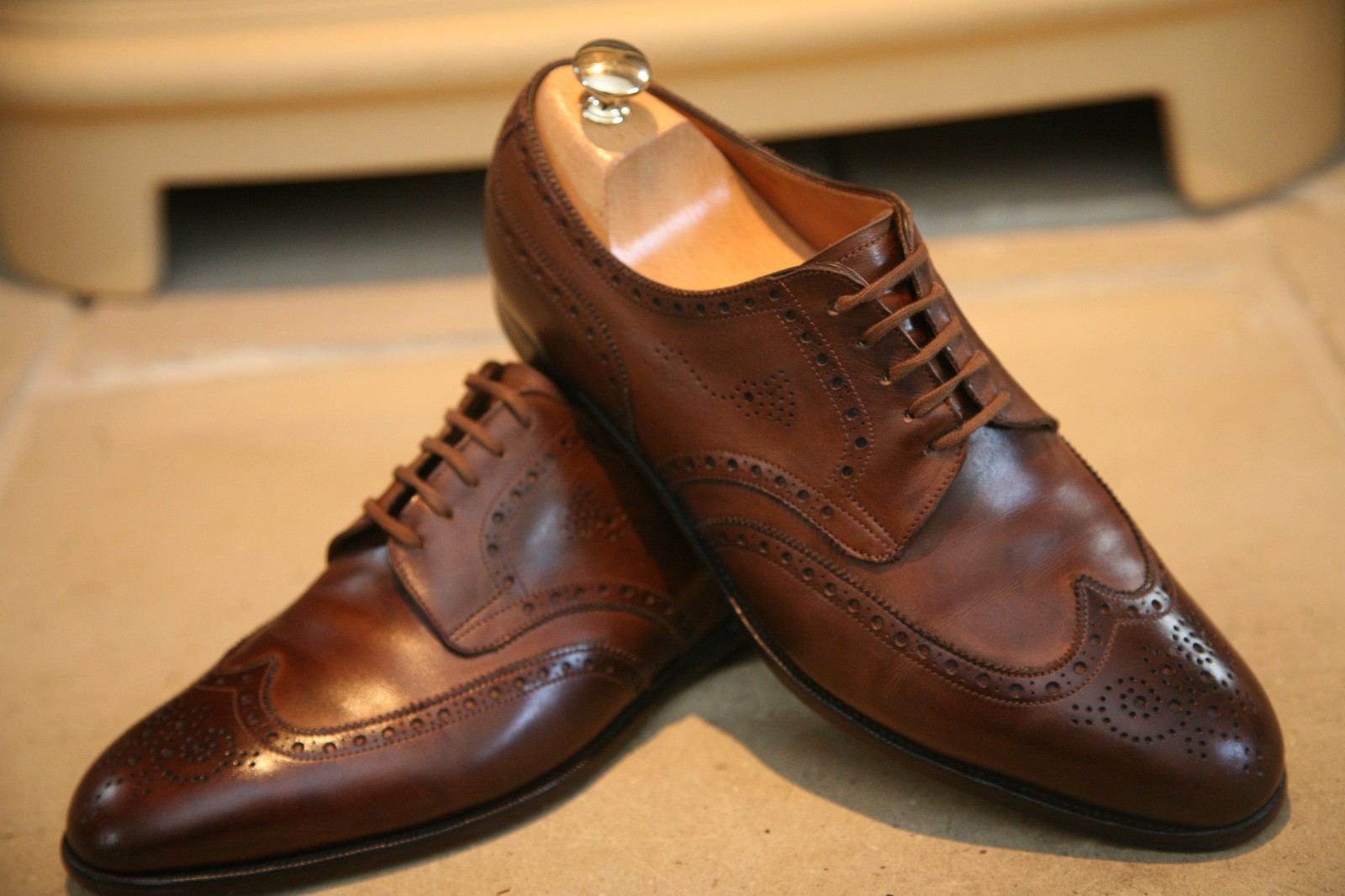 The style is Sandringham. Judging by the joint-up "Edward Green" name on the embossed sock (insole liner) and the production number, the shoes are pretty old, I would place them in the late 1980s, early 90s.

Even if the shoe have have had little wear, there might be some damage to the leather from storing all this time under too dry conditions. At USD 600, I believe they are grossly overpriced and I would leave well alone.

From the (now defunct) Japanese magazine LAST, a guide to date EG shoes.

Wow. thank you so much!!

Incidentally it looks like the shoes have been meticulously maintained, but I gather the shoe is still overpriced given its age. It's unfortunate because I have been looking for a shoe like this for some time. Oh well. Any other thoughts?

sestyle said:
Wow. thank you so much!!

Incidentally it looks like the shoes have been meticulously maintained, but I gather the shoe is still overpriced given its age. It's unfortunate because I have been looking for a shoe like this for some time. Oh well. Any other thoughts?
Click to expand...

That seller, "shoes of distinction," is notorious for insane prices for used shoes, and he is non-responsive to emails. I was interested in making an offer on some shoes, and he never responded to any of my inquiries. That was 3 months ago, and the shoes are still for sale on eBay. He seems to have a strategy of buying most used Edward Greens on eBay and attempting to resell them at a ridiculous markup. I'm curious to see if he has the capital to maintain this strategy. I guess if he buys almost everything on the market, it will drive prices up. It's going to cost him over the short term.

Also, he really doesn't know much about shoes. I have seen half a dozen, or more, shoes that he labeled as "Edward Green for so-and-so," that were incorrectly marked. At the ridiculous prices he asks, you would expect him to verify this information.
Last edited: Nov 12, 2012

+1 Rebel. Lots of mis-marked shoes, always supposedly Edward Green. I have not tracked his feedback but I assumed he must be selling at least some of the stuff because he's been posting and reposting new items for a while now. I figured people were getting the shoes for lower than his asking price, because it doesnt make any sense to buy 20-30 year old shoes for above $500.

There was a period where he had a few Falkirks and Windsors, several with severe/obvious cracking of the leather, and he was still asking for $300+.
A Golden Age of Style. A Golden Age of Crime. The Best Dressed Man In The Room
http://www.blurb.com/b/4608993-the-best-dressed-man-in-the-room
https://uptowndandy.blogspot.com/2018/03/the-rake-frank-pellegrino-raos.html​

There's a sucker born every minute.

I imagine his strategy is to simply keep them available until someone who is not particularly well informed buys them at a gross mark up.

Luckily there are those out there to give advice to the 'uninformed' as you put it.

I did contact offline and the seller seems motivated to entertain offers. Not sure if they will take the very low offer I have made... we'll see.

I think his selling techniques aren't on the up and up. Whether he is clueless as to the manufacturer of some of his shoes or he is intentionally misleading people, I have no idea. However, he did buy a pair of EGs from me for $300. I've been selling on eBay for 5+ years, and the shoes weren't worth $300. I had a buy-it-now set for well above what I reasonably expected to get for the shoes. He bought them under the eBay ID 'giles4931.'

I found this thread and understood what happened to the listings I was observing...

It seems like "shoes of distinction" offers "buy it now" price to the sellers and try to buy high end shoes outside ebay. It's not fair for others!