Anyone know about them? When/if they went out of business, quality etc. Searched the forum and the web but couldn't find anything except some ads from the 1920's.

No idea, but I like old ads like this one. There was a certain eloquence to them that is, IMO, sadly lacking in modern advertising. When was the last time you heard clothing described as having an, "aristocracy of style"?

No idea, but I like old ads like this one. There was a certain eloquence to them that is, IMO, sadly lacking in modern advertising. When was the last time you heard clothing described as having an, "aristocracy of style"?

Agreed. They have some other adds if you search google images, but the text is tough to read.

Here's a photo of a corner sign I found:

I'm curious because I have a pair sitting here and can't find out anything about them; no idea how old they are (although they are in half-decent condition); figured someone here might know.

post a picture of them!
New website is LIVE - Exquisite Trimmings / Affiliate Thread / Instagram
Use SF10 for your Styleforum discount
Check out our new arrivals here​

The Banister Shoe Co. was bought out by the Stetson Shoe Company. They became their step up, more style oriented line. My father used to sell both lines of their shoes until the late 1960's. I assumed that being an American made shoe, they became uncompetitive and went out when the Stetson shoe company went out.They were a very nicely made shoe!

lschick said:
The Banister Shoe Co. was bought out by the Stetson Shoe Company.  They became their step up, more style oriented line.  My father used to sell both lines of their shoes until the late 1960's.  I assumed that being an American made shoe, they became uncompetitive and went out when the Stetson shoe company went out.They were a very nicely made shoe!
Click to expand...

Thanks for the information. As someone with a few pairs of Stetson shoes I imagine your father would have enjoyed selling such a wonderful product.
This is the funniest post I've seen in quite a while. I'm not being sarcastic, I got a genuine laugh out of this. The link is icing on the cake. Not sure if you are serious or have an incredible sense of humor but, this works.

My name is Arthur W Banister, the oldest surviving member of the Banister family that founded the Banister Shoe Company. The company was apparently incorporated by my Great Grandfather, James A Banister sometime in the 1850's; however, his father, Isaac Banister, had been making shoes for select customers since about 1830. From the beginning, the focus was on quality, as evidenced by the ads published in the late 1800's and early 1900's. My Grandfather, Arthur C Banister, apparently took over the business in the early 1900's from his father, who died in 1906. The business was voluntarily dissolved on 20 August 1930, probably because my Grandfather was in poor health (he died in 1933). Contributing factors may have been the business outlook in the 1930's and my father's (James H Banister) lack of interest in pursuing it. The Banister shoe name was purchased and repurchased several times, but to the best of my knowledge, no real Banister shoes have been manufactured since 1930.

One of my daughters, Eva Banister, has developed an interest in securing several pairs of Banister shoes and has founds numerous ads for Banister shoes from various sources. She may be able to provide additional info if anyone's interested.

I came across this because I just bought a pair of Banister crocodile monks on eBay. Supposed to be hand made in Italy and authencity guaranteed. We'll see when they arrive!

Lee
"Make no mistake, mine is a face that has seen the action."
"'Men like me?' There are no men like me, there's only me." </p Be peaceful, be courteous, obey the law, respect everyone; but if someone puts his hand on you, send him to the cemetery. That's a good religion." (Malcolm X)

I know a lot about Banister Shoes. I wore them up to the early 1970's when they were bought by Brown shoe company and a great shoe was lost. They were handmade shoes. They couldn't compete with the cheaper machine made shoes. They were all pretty traditional in the beginning. Wing tips etc. They were a favorite of the Italian Gangsters. They wore the Italian style wing tips that were different than the English style wing tips. Banister made both. If you ever saw the movie Good Fellah's and the very young gangster bought his first suit and shoes. The Italian style wing tips are what he wore. Earlier in that same movie you would have seen the two Gangsters in the Cadillac wearing the English version. The English version was more popular than the Italian style. I got my first pair in 1966, they were a slip on version that were called Pilgrim style, they had a pointed toe and a Cuban heel which was as they felt in that time was Kool for dancing. Being 15 years old at the time and my parents putting out 65 bucks for a pair of shoes was a big deal. I later got another pair that were all lizard skin that set me back 150 bucks. I had a job by then. There were other styles two. The El Draco which was a wing tip slip on with a rubber stretch on either side of the shoe with the Cuban heel. In the pictures of Banister shoe I saw another style I wore that was a slip on that tied on the side and had a braid that kind of split the front of the shoe, they had tassel and were very popular. The only man made material was the rubber on the heel. In St. Louis Mo where I grew up, there were only certain shoe restoration shops that could return them back to new. You could wear out the sole and heel but if you took care of the leather upper you could have them for many years. I long ago wore out my last 2 pairs of Banisters. They were a pair of Brown El Dracos and a pair of Italian Olive wing tips. I wore a size 8 1/2 then and was 20 years old out of the Navy and moved to California. I'm much older now and still will only buy hand made shoes, after all my feet deserve the best I can afford for them. They've carried me where ever I want to go. I now where Mezlans, Belvedere and other European style shoes. Yes I still buy the exotic leathers like Lizard and Ostrich too. But I still remember the days when I went to the Banister shoe store and the sales man would measure my feet, (I wear a 10 now) bring out the shoe's of my choosing and walk out proudly with the Banister box and bag. Now don't let me get started about the Knox hats too. Hahahah

Your style is the English Wing Tip. They made those from the 1920's until they were bought out by Brown Shoe Company.

I just got these at a second hand store. Amazing quality and the first spade sole shoes I've seen in person. Any idea of the age? 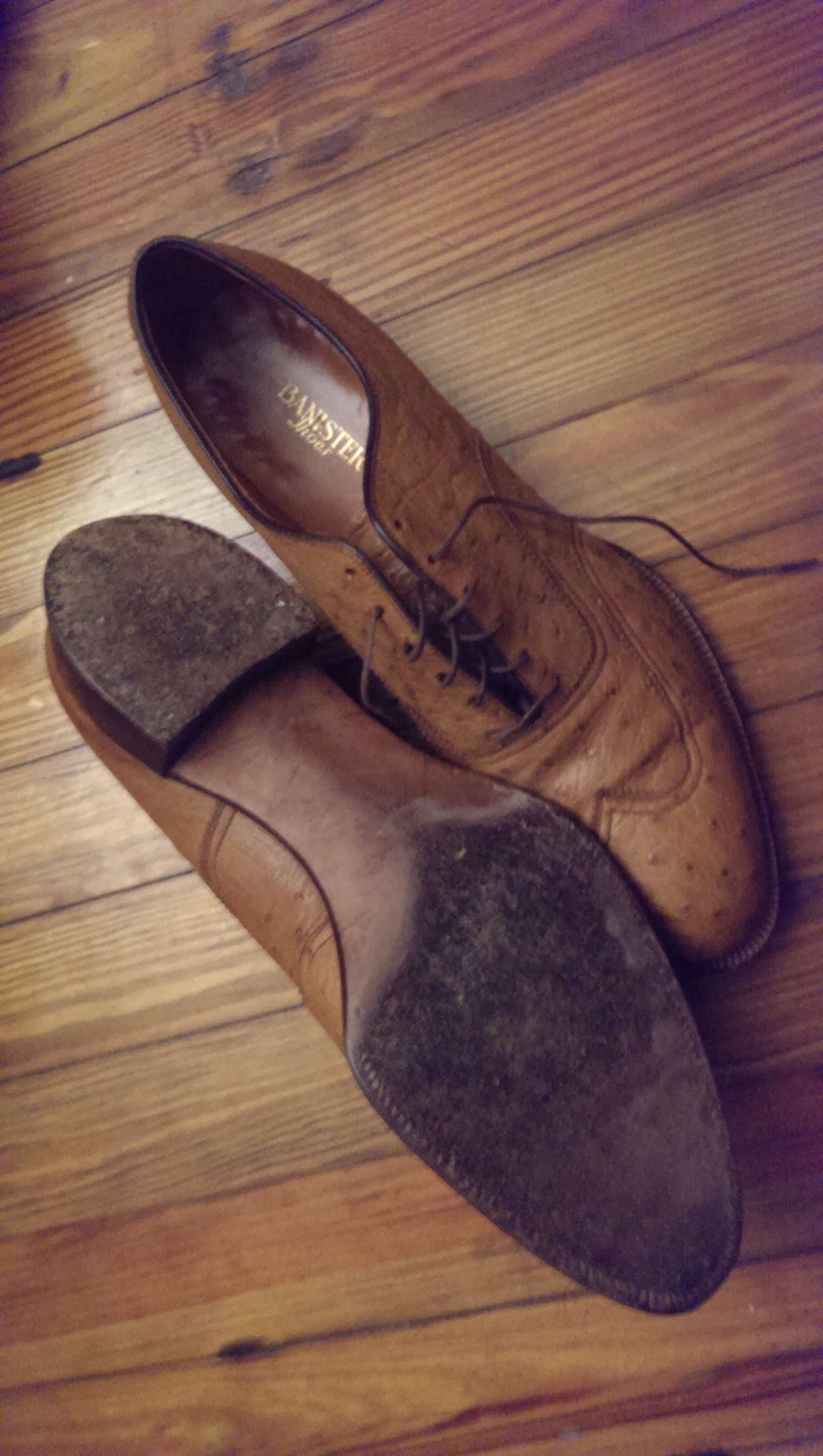 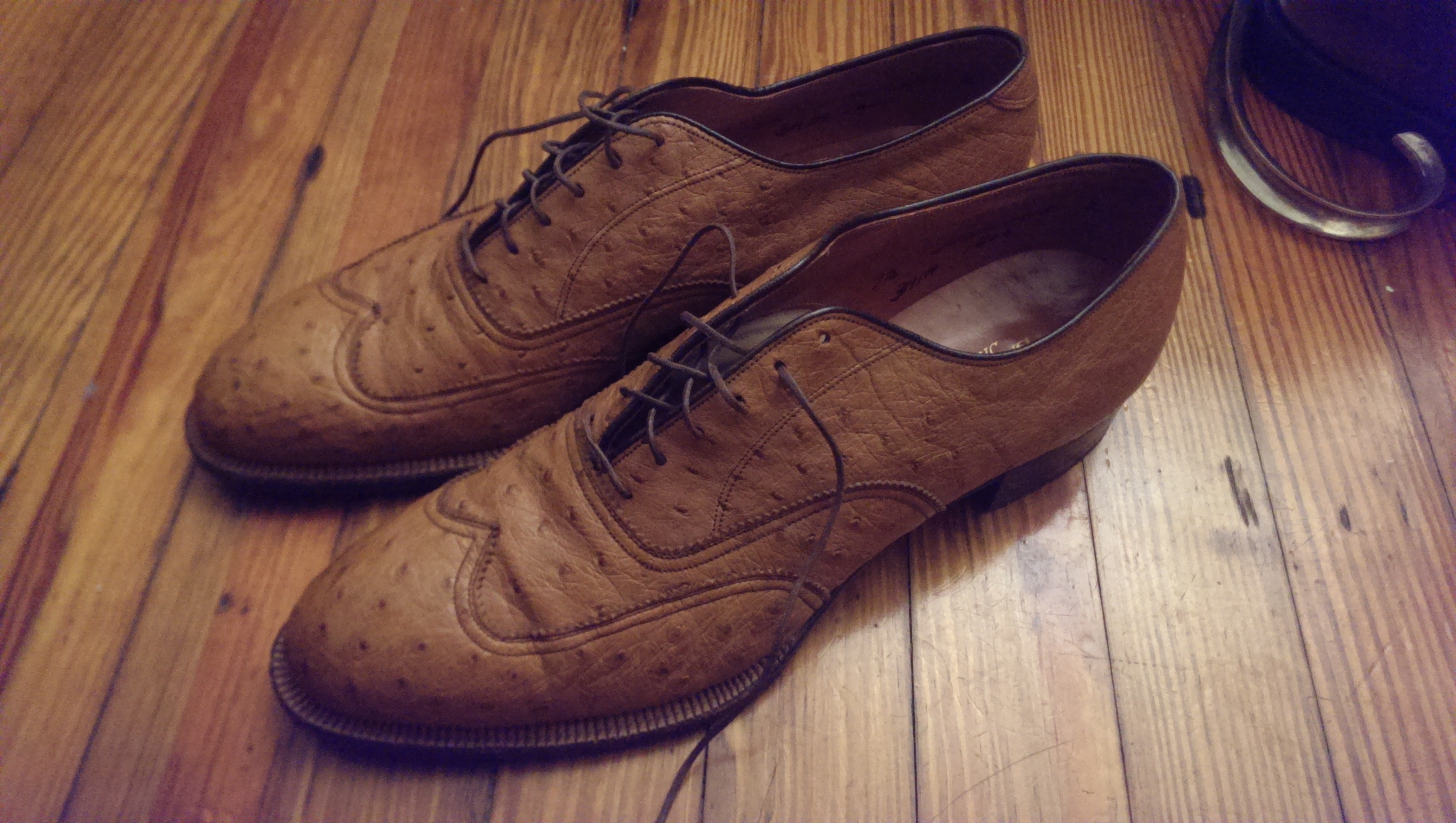