And by "casual dining", I mean one of those small, relatively nicely appointed bistro style restaurants that have been popping up in newly built shopping centers near airports. A recent review described the establishment as "...isn't gorgeous. You certainly don't feel pampered there. But for mid- to upper-price Asian fare, it is satisfying." I'm saying that while the place wasn't a fine dining destination, it was a step or two above T.G.I. Fridays.

We had spent Sunday afternoon bargain shopping and stopped here on the way home for a light evening meal. We were dressed for our task, mostly in recent/fitted/dark wash presentable jeans and nice sweaters/shirts. Casual but certainly not dressy by any means. 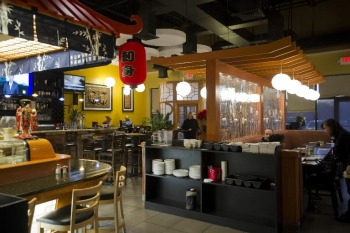 In this internet sourced photo above , we were seated at the table where you can see the person's face looking in the camera's direction, just beyond the stacks of white napkins. Shortly after our order was taken a young family of three was seated at the table next to us. The child, a lad of less than 10, was wearing a bandana on his head and Dad wore a knit cap featuring the logo of the local NFL franchise similar to this. 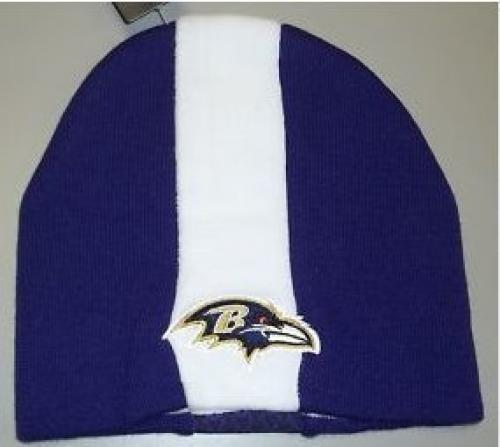 Neither piece of headwear was removed throughout the meal.

Now, before you opine that perhaps the cap was worn for reasons involving hair care, allow me to point out that it was placed on the gentleman's head in a manner that allowed a partial view of his hair so that it was obvious that his hair style of choice was of the shaved yet stubbly genre. The bandana wearing young man obviously needed to keep his on due to the uncontrollable nature of his current style of hair. As he was a child, I can't fault him in this instance.

The meal was satisfying and not unduly disrupted due to the guy sitting next to me so in the grand scheme, I suppose there's no harm done. Upon leaving, I noticed another diner wearing a baseball cap (59 50) as in the picture below. 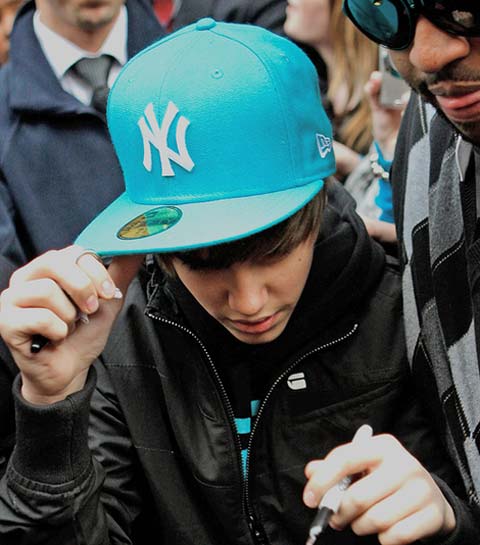 I post this on styleforum because I feel that some here will understand, others, perhaps not but none of the other forums (fora?) on which I participate would have a clue.

I'm pretty fogey-ish about a lot of things, Dig, but wearing hats indoors doesn't bother me any more than does putting one's elbows on the dinner table. The rules against such things seem quaintly antiquated to me.

Wearing sunglasses indoors, on the other hand, pisses me off a bit, as do people who, out of habit, put their phones face-up on the table right next to the silverware so that they can monitor incoming calls and texts while ostensibly having dinner or drinks with others.

See? I'm still a fogey.
"Any fool can learn from his mistakes. The wise man learns from the mistakes of others." - Otto von Bismark

Wearing sunglasses indoors is really silly. I don't understand why people do that...

Juliane said:
Wearing sunglasses indoors is really silly. I don't understand why people do that...
Click to expand...

I do it sometimes if I'm running in somewhere quickly, I find that if I hang them off my clothes they fall off onto the ground (almost ruined a few pairs of sunglasses that way)

I am annoyed by guys wearing their cheap fashion statement fedoras in side restaurants.

Wearing a hat indoors is ridiculous. The same goes for sporting sunglasses inside or after dark. Both amount fashion without an ounce of substance.

As for the dining establishment the OP describes, I can't recall ever dining in a shopping center. I can't even recall the last time I went to a shopping center.
Last edited: Feb 20, 2012
You can't learn these things on Style Forum, you can only know them from having lived them.

ter1413 said:
rally no big deal in those types of establishments....
Click to expand...

You really are right. If one decides to 'dine' in this kind of establishment, one really shouldn't expect the impossible.
You can't learn these things on Style Forum, you can only know them from having lived them.

This is only acceptable if it is a Ravens hat.

Anything worthwhile at Arundel Mills?
Quote:
Originally Posted by westinghouse

hey, if you think you look mah-velous...that's what counts.

I remove my hat when I eat. I know many others do not, but this is just another personal reminder as why I am better than them.

Robert Evans said:
...By the way, lawyers lie every single day and that includes you (without even knowing you) - it's part of the profession and everyone knows this, so you may want to dial it down on the ethical obligations speech.
Click to expand...

You think they have extra ranch dressing and a to-go-coke?

Robert Evans said:
...By the way, lawyers lie every single day and that includes you (without even knowing you) - it's part of the profession and everyone knows this, so you may want to dial it down on the ethical obligations speech.
Click to expand...

Dig you are from Baltimore area?!?!?
"When you stop striving for perfection, you might as well be dead."

harvey_birdman said:
I remove my hat when I eat. I know many others do not, but this is just another personal reminder as why I arrogantly believe that i am better than them.
Click to expand...

While your at it ... the sentence should end with a nominative pronoun.