I just picked up a pair of Lloyd &amp; Haig Custom Built Shoes. Shell Cordovan. I have never heard of these. Does anyone have any experience with them or know the history? I will try to post pics later.

Went out of business some years ago. I have a pair that are 20 years old and still look pretty good.

Lloyd & Haig was a traditional mens shoe retailer with a few branches in New York, such as 233 Broadway (the Woolworth Building) and Madison Avenue and either 40th or 41st Street. I do not know if it had branches outside NYC.

A couple of footnotes:

1. L & H occupied the corner of Broadway and Barclay St. in the Woolworth Building during the 1970's and early to mid-1980's. My recollection is that it concentrated in traditional American shoes made by American companies, the type of stuff that Alden makes for Brooks Bros. as well as the Allen Edmonds type of shoe. A couple of Italian and Spanish casual shoes were carried. I do not think that sneakers or any sports shoes were carried except for boat shoes. Pricing was reasonable and in the mid-level range.

2. Ironically, sometime after L & H went out of business, the same spot was occupied by Kinney Shoes. The Woolworth Company owned Kinney. Eventually, it became a Great Northern or some other sportswear company which was also owned by Woolworth which became Venator which became Footlocker.

3. The store is now a Starbucks.
Mark E. Seitelman
www.seitelman.com

I have 4 pairs of wingtips. 2 are lace ups and 2 monk strap. Good quality shoes.

3. The store is now a Starbucks.

Why it always ends with this?

I have one pair. Brown Calf Monkstraps, crepe sole, gold buckle. Calf is a flat brown (no antiquing done). Purchased &quot;near NOS&quot; from an ebay seller who advertised them as 10.5E, but actually turned out to be 10.5 E/EEE (I had a thread a while back asking whether this was misrepresentation). I now wear them with thick socks and insoles, with the buckle in the tightest setting.

Made in England, probably comparable to the old Grenson Footmaster line.
All my stuff for sale is gone for now.

Yeah, I know. Gotta get a better camera, all I've got is what's on my blackberry. Pics look like crap....
All my stuff for sale is gone for now.

just picked up a pair on Ebay. they look v substantial. thoughts? 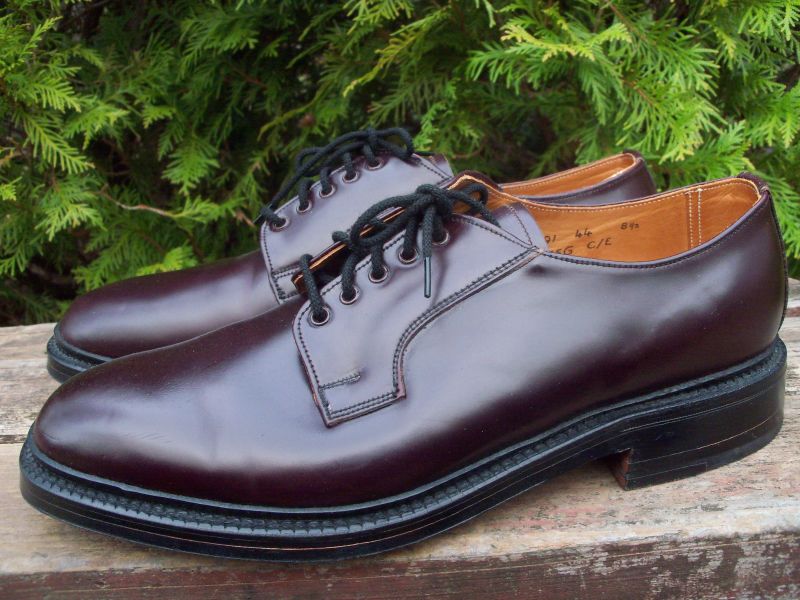 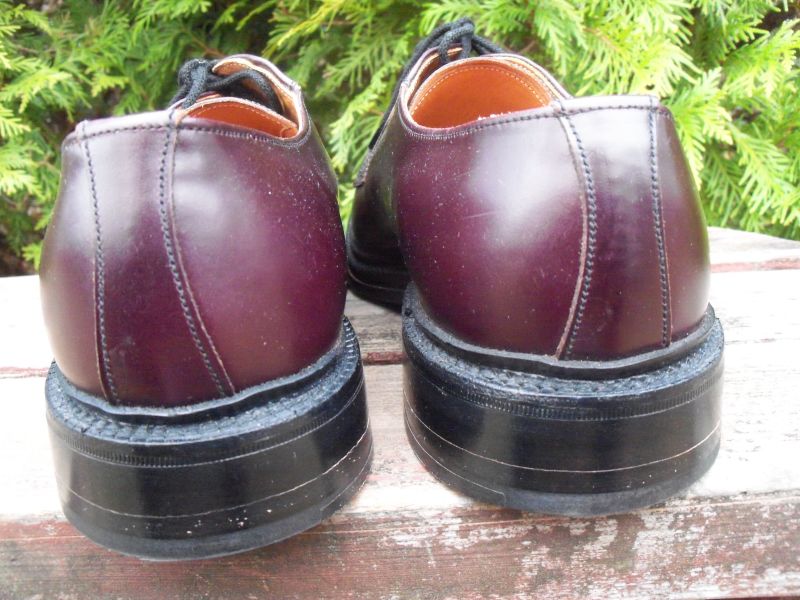 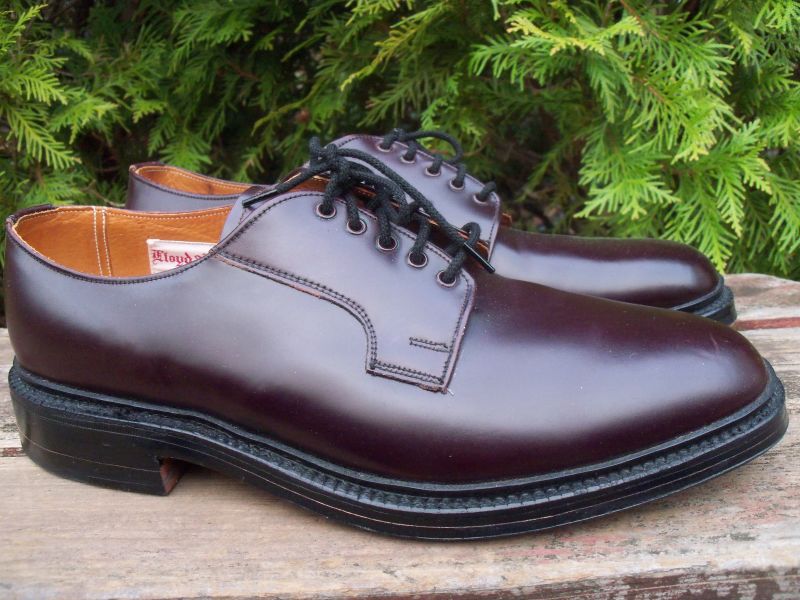 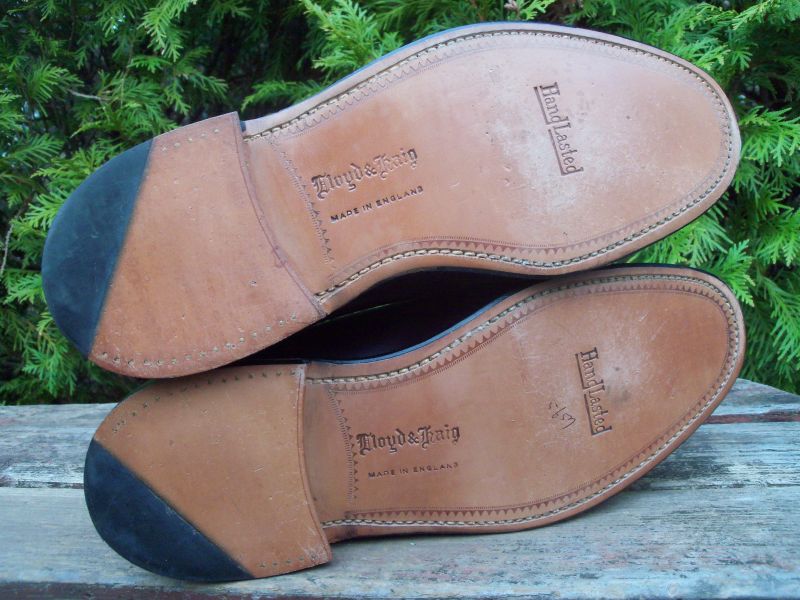 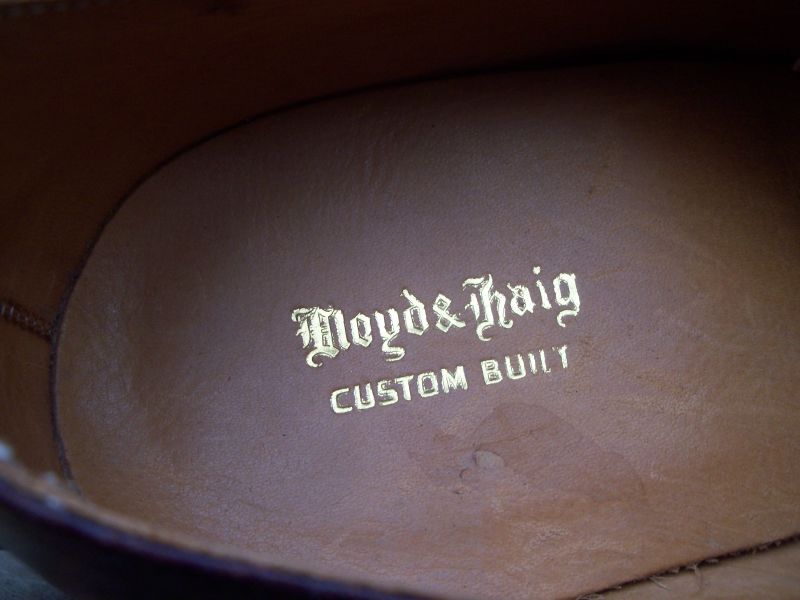 Those look terrific. The seller was a forum member (window). You got them for a great price!
The Madras Shirt thread·Suede shoes thread ·The eyewear thread

One of the very fine gentlemen and customer of LLoyd and Haig shoes provided the following from Mr. Bill Tarlow, the last proprietor of the Lloyd & Haig who has generously provided much of the following detailed information about the history of this historic New York firm.

Lloyd and Haig was founded by two Englishmen in 1929 on Cedar Street in New York City. It failed shortly after and was taken over by Ed Meyer who a year later joined forces with Sherman Tarlow, Bill Tarlow's father, a salesman for Alden Shoes in New York. They opened a store together on East 44th Street on the unusual proviso that the store show a profit in its first year otherwise Tarlow would be out and lose his investment. But successful they were and continued in partnership until Ed Meyer's death in 1956. Bill Tarlow joined the firm a year later and was followed by his brother Alan 5 years later. The Meyer interests were purchased in 1958 and the firm became a family owned and run business. Sherman Tarlow died in 1977 and the firm continued under the direction of the two brothers. In 1959 Lloyd & Haig replaced Alden with Howard & Foster and the private label division of Bostonian as their suppliers. Hanover produced hand sewn loafers mainly for the firm and when they could not get cordovan leather they produced a plain toe oxford. In the early 70's they were approached by a British firm of Joseph Cheaney and, at that time, reintroduced English shoes to their line but Lloyd & Haig designed almost all their own styles and chose materials to fit.

I personally wear Allen Edmonds and custom Church crafted shoewear, but believe LLoyd and Haig to be on par. And, for my tastes better than Arlen and Bostonian which I also wear on occasion. Both materials and craftsmanship are first rate.

Here are bunch for sale (recently)