Advice on improving my style

Hi, I haven't been here very long. I'm a 22 year old college student seeking advice on how to improve my style. I'm aware of some of my current mistakes (such as baggy pants, and cheap shoes), and I would like recommendations on which elements I should focus on. I have a very limited budget, so I can't do much over $150 dollars on any one item in particular.

Here is the suit: 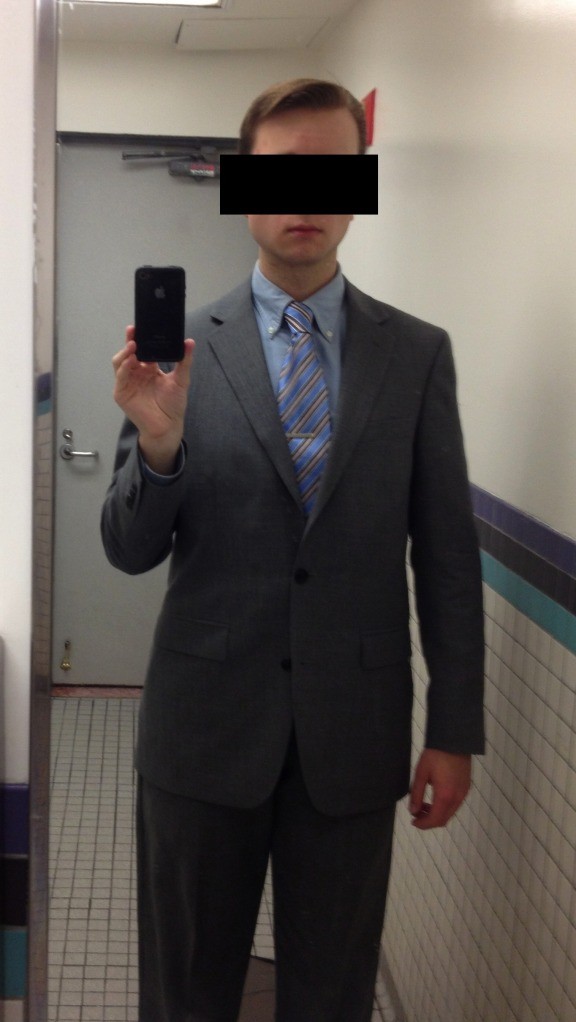 It might be a cheap piece of junk, but it's 100% wool, was around the $200 range, and I like the color. I bought these at Land's End from their suit separates, nearly a year ago. I basically started with this as my first suit. The old black polyester suit from my teen years doesn't count, and I only wore that to weddings and funerals. Now I wear a suit with a little bit more regularity. It might be a piece of junk, but I had to fill that gap in my wardrobe with this for the time being. To improve it, I should either have the pants taken in, or just order their tailored fit option. I didn't get the tailored fit originally because of an experience I had with their chinos being too tight, and having the pockets bulge out. Another thing that I would have done differently that particular day is to have worn a darker tie, or perhaps just a white shirt.


This is how I usually dress, often a variation of what's below (but with shirts other than blue too):


(An Old Navy brown corduroy sports jacket. It's currently my only one.) 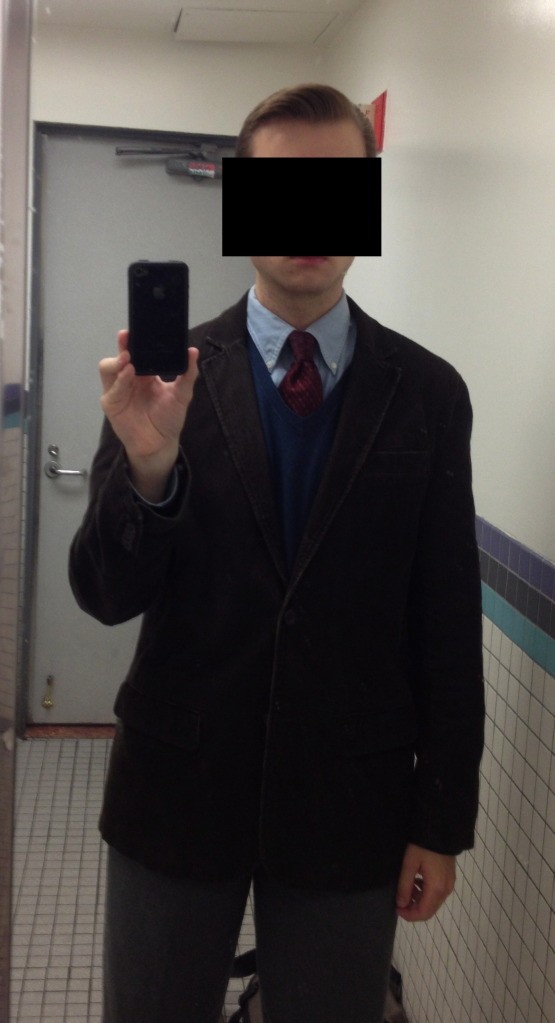 (The jacket's just taken off, and here's one of my two v-neck sweaters. The other is tan, and I sometimes wear a tie.) 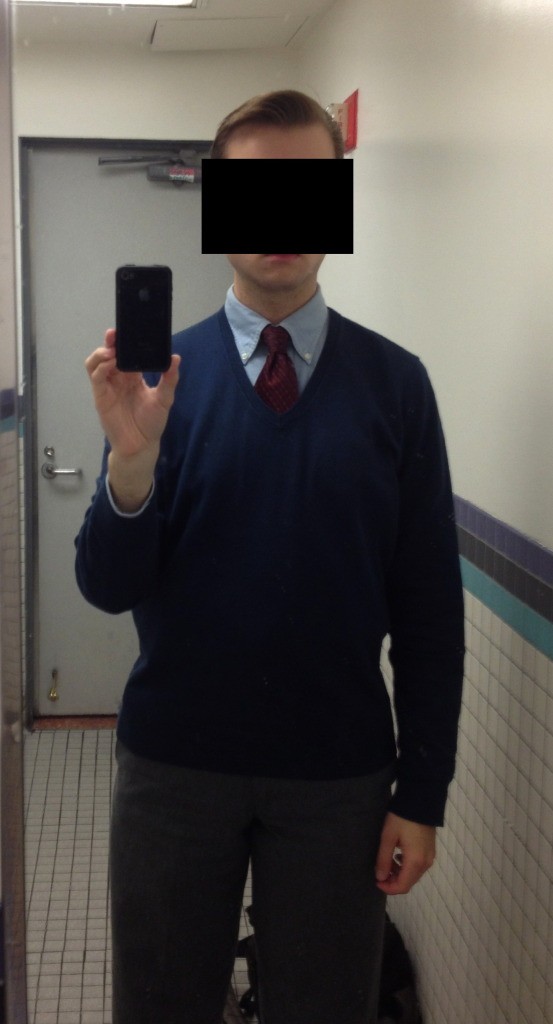 (G-1 bomber jacket: baggy, but I still wear it sometimes. It's mostly been replaced by my Wested.) 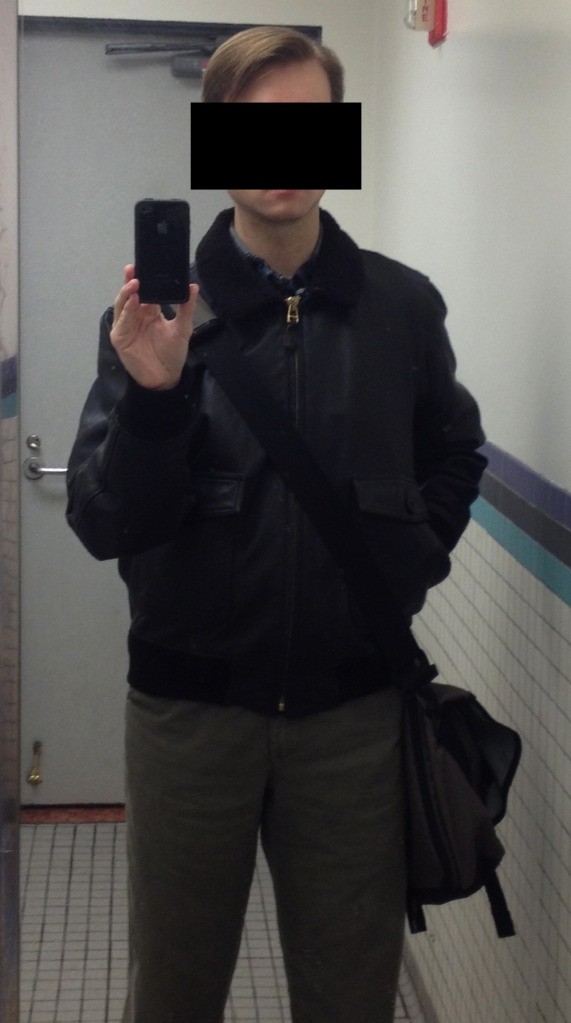 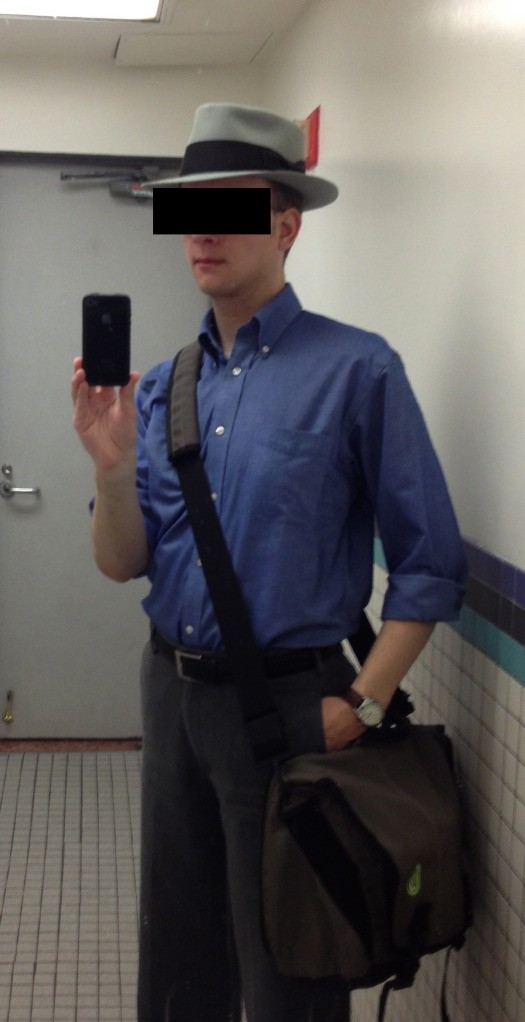 (Wested Raiders jacket, and I'll try to get a clearer picture later) 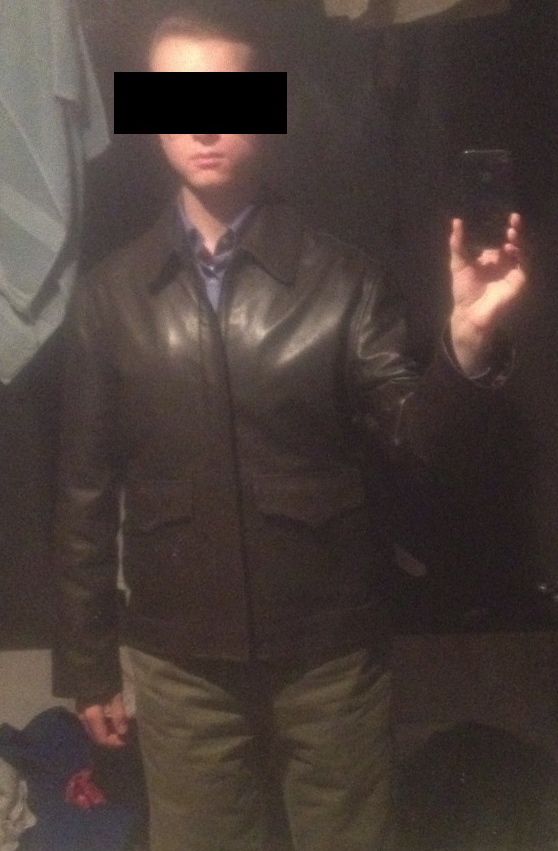 (An old McGregor Anti-Freeze jacket I found on ebay) 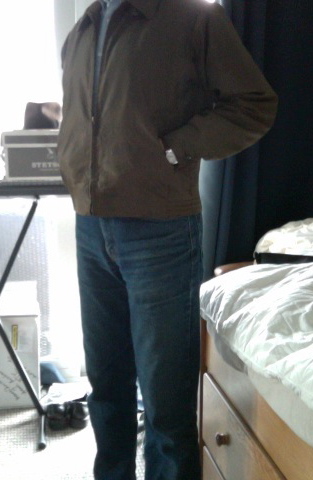 Thanks, I'm open to suggestions.

You're probably the best dressed "new guy" I've ever seen on here. I would post some pictures of your shoes. Chances are your money should all be spent there.

Cord suit: same as above.

v-neck: try one size smaller, shirt cuff should be able to show. Also, get some light/bright colored ones to go with the cord jacket (red, orange, light blue, etc.)

Bomber jacket and raider jacket: both seem a bit too large.

Shirt: get some MTM shirts from Modern Tailor. You have a long, thin neck, so get the high collar (2 collar buttons) configuration.

Bag: get a nice leather bag from Wilson leather, should be less than $80 if you have a store nearby. Something like:

For a guy who's 22, on a budget, and new to caring about style I think you're doing great.

But I might add something - you said those looks are how you typically dress.

Don't be afraid of sex. Take a walk on the wild side - you don't always have to be Mr. Rogers - sometimes you can be Mr. Rock & Roll as well. Personally I mix it up - some days it's suits, some days it's destroyed jeans and fitted scoop neck t shirts with old boots.

You can inhabit both the MC and the streetwear & denim sides of the coin - and do both well.

I think you're doing good. Style is personal so you have to own it so to speak.

Fit is the issue over anything else. You need to taper through the waist on your jackets and pick sweaters that are more fitted.

Thank you, gentlemen! I should make it clear that the next big investment I'll make will be towards new black dress shoes or boots. Off hand, I'm thinking of these for my fix of chelsea boots:

They'll be black, and I'll be wearing them with my suit as well (Despite the fact that they aren't traditionally associated with business wear). I think I'd just prefer to go laceless this time around, but it can change.

As for the Wested jacket, here are a couple of better shots, plus one where I'm just wearing the safari shirt. According to the guys at Club Obi Wan (Indiana Jones gear forum), the jacket looks and fits about correctly for the Raiders of the Lost Ark look that it was based on; somewhat loose looking. As such, it's a jacket I don't mind treating a bit rough to get the rugged, weathered look eventually. I mean that naturally though, I don't do the artificial distressing thing. 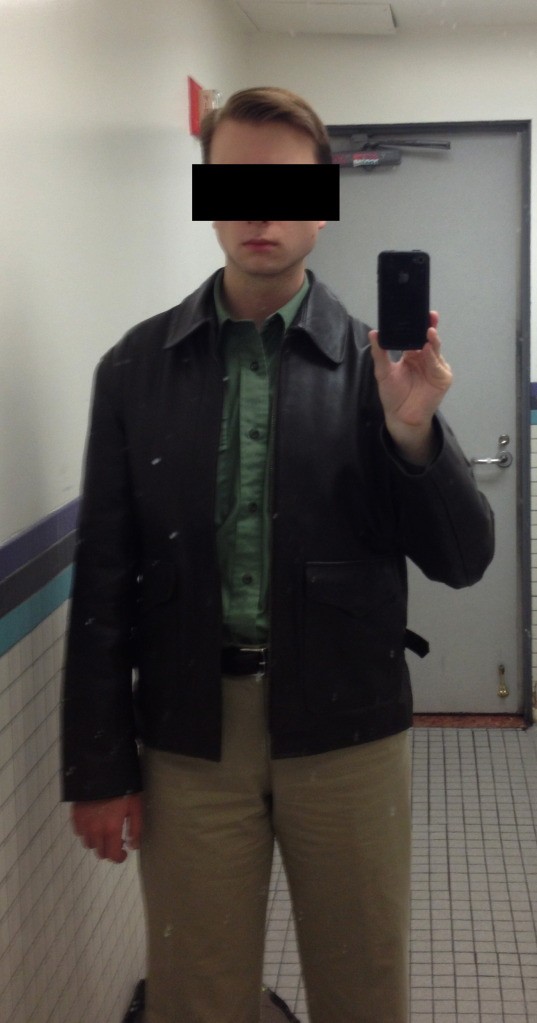 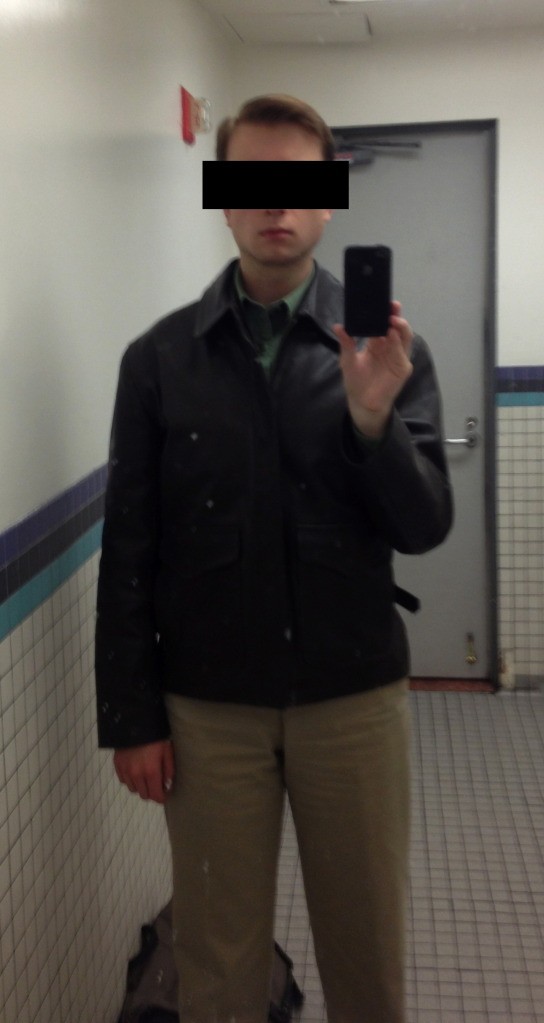 3. Shirt (I own a blue one of the same type, these were from Cabela's, and they're both size small.)

Next, for the shoes I currently own, it's not a lot. Just three:

1. Docker's (Dark tan, I wear these with almost anything except for my suit.)

2. Bostonian's (Black, I should have put more thought into my choice of shoes than these squares. I was in a hurry to get inexpensive dress shoes for a function, but now I know better.)

3. Sperry Top-Siders (Navy, they're my go-to casual shoes to wear with jeans or swimming trunks.)

Now, as for the bag that I bring with me to classes is too synthetic and outdoorsy to be elegant, but it does the job better for me than a backpack would (Even guys wearing suits use backpacks over here). I think I'll definitely hold off on a nicer bag for the time being, but point well taken.

OK, and now I'll move on to the subject of my hats. I'm kind of a hat guy, but I'm not wearing one most of the time, it's just been a hobby of mine since three years ago to have felt hats. The one already pictured is the one I wear the most. It goes with most of my clothes, in my opinion, and it happens to probably be the least "costumey" hat I own (I prefer not to wear baseball caps, personally). Here's another picture of that hat, and this time I'm wearing the same suit pictured above, but sitting down: 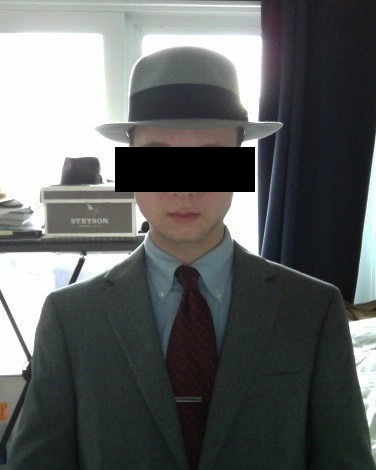 Here's a more country style hat, a modern Stetson Open Road. I wear it on walks and hikes, but it can't take rain (I ended up returning one that did get soaked) like my other two can. 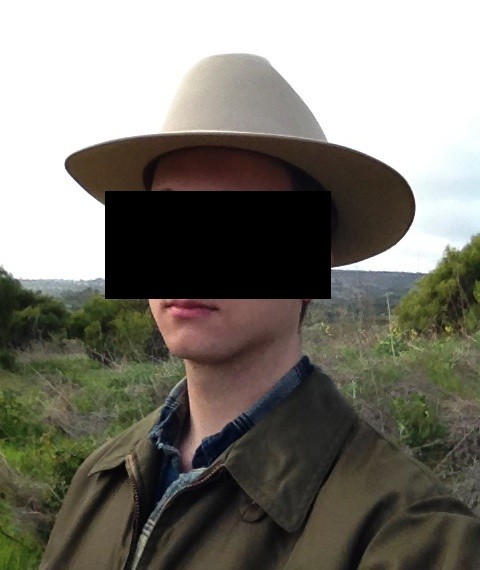 Then, here's my Akubra Federation IV, based on the style of Indiana Jones' fedora, but I don't have mine precisely creased that way (I used to, but I've come to dislike too tall of a crown on me): 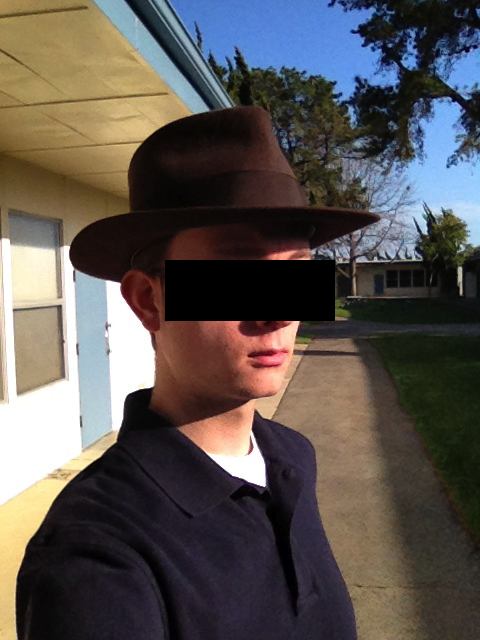 (Yes, I know wearing an undershirt beneath a polo isn't stylish, but it was to control the perspiration that day hiking.)

Now, that last one is the hat I happen to wear the least, but I sometimes wear it hiking, and it works when worn out of costume context.

why are you wearing a suit and tie? Your khakis are frikken terrible.
You're a college student. Watch some fashion shows, figure out what you like, wear it.
You can make as many mistakes as you like, but the absolute worst one would be to be the dude who dresses as an old man.

Venture over to SW&D. Browse. Learn. Refine your tastes.

the shah said:
thank you for such flattering words but i'm neither next lvl nor ultra-consistent, i'm anachronistic disorder which makes me a lover not a fighter
Click to expand...

I don't know if you have large thighs or really like the cuts of your current pants, but I think you can get a pair that's cut slimmer. Had you not said you were 22, I would've guessed you were in your mid-late 30s.
Blog: The Designers Must

I've tried getting a pair of tailored fit khakis from Land's End, and they were too tight, with the pockets bulging out. I have rather wide thighs as well, but at 6"1' and 160 lbs, I'm not overweight. However, I would prefer not to wear low-rise pants, mid-rise is my preference.


[FONT=verdana, tahoma, arial, sans-serif]Quote:[/FONT] [FONT=verdana, tahoma, arial, sans-serif]Granted, they're very plain looking pants. Kind of like what a lot of guys I see wearing them look like. A part of my experience here is to improve, that's why I'm posting here. I want to pull off the suit and tie aesthetic at my age though, that's a large deal of what I consider to look cool. I watch a lot of old school movies that involve this kind of getup.[/FONT]

Yeah, this year I'll try to get the fit of my pants sorted out. How much should I expect to pay at a local tailor (or anywhere that does this service) to take in the pants a bit? It shouldn't be very expensive, right? I wouldn't prefer a fit that's too tight and tapered, like I've noticed some members wearing, but that doesn't mean I think it looks bad either. I gave up wearing pleats last year, so I guess I'm making some progress.
Last edited: Apr 4, 2012
L

hendrix said:
why are you wearing a suit and tie? Your khakis are frikken terrible.
You're a college student. Watch some fashion shows, figure out what you like, wear it.
You can make as many mistakes as you like, but the absolute worst one would be to be the dude who dresses as an old man.

Venture over to SW&D. Browse. Learn. Refine your tastes.
Click to expand...

I would agree with this.. focus on the style and the fit and compromise on the fabric if you are on a budget. Also hit the gym hard and eat more at 6"1' you should be weighing at least 20 lbs more and this will do more for your style and confidence than anything else IMHO. But you are on the right track and have a versatile wardrobe which is great. Keep up the good work

I'd like to know where you live and how close the nearest mall is? What is your total budget? You can get a lot of great stuff on ebay but i'd offer two pieces of advice

1. everyone spends a certain amount of money up front that ends up being wasted. Maybe you buy a suit on ebay that winds up looking too dated in person or the measurements are not listed correctly.
2. dress more in line with the lifestyle you lead or want to lead. At 22 you might enjoy spending more $ on a pair of good fitting stylish jeans and casual shirting, unless your graduating soon and view this is an opportunity to build a work wardrobe.

step one should be to burn those khakis.

Newbie question, aren't button down collars for sports shirts, not dress shirts? If so, maybe his shirt in the first pic should be replaced with a different one while wearing a suit?